Get the essential Icelandic experience on this three-day private tour, visiting the famous Golden Circle and travelling the amazing South Coast to a stunning glacier lagoon. This tour is perfect for those who want to discover the country’s magnificent landscape, without having to worry about travelling on anybody else’s terms.

You will start your adventure in Reykjavík City, where you will be picked up by either a Luxury Van, a minibus or a 4x4 Super Jeep, dependent on your wishes.

Your private driver and guide will then drive you out of the city to some of the county’s most beautiful places. First, you’ll visit the UNESCO world heritage site Þingvellir and the geothermal area of Geysir. You’ll also see the famous waterfalls Gullfoss, Seljalandsfoss and Skógafoss, the black sand beach of Reynisfjara and the beautiful Jökulsárlón glacier lagoon.

You will also get a chance to see some lesser known locations, being hidden gems that are not often visited, such as the waterfall Foss á Síðu and Orrustuhóll, a scenic cliff-sided hill, making this private tour feel even more exclusive.

Along the way, you can add some icy adventures to your journey. You can whizz across the ice cap on Langjökull glacier, hike up a glacier tongue at Skaftafell nature preserve, or take a scenic boat ride on Jökulsárlón glacier lagoon. Your tour guide can also take you to various museums and working farms around the area if you'd like to learn more about the country's history and culture.

Don’t miss out on this chance to see Iceland’s most beautiful attractions with your favourite people on this private three-day tour.  Check availability by choosing a date.

Book now, the trip is selling 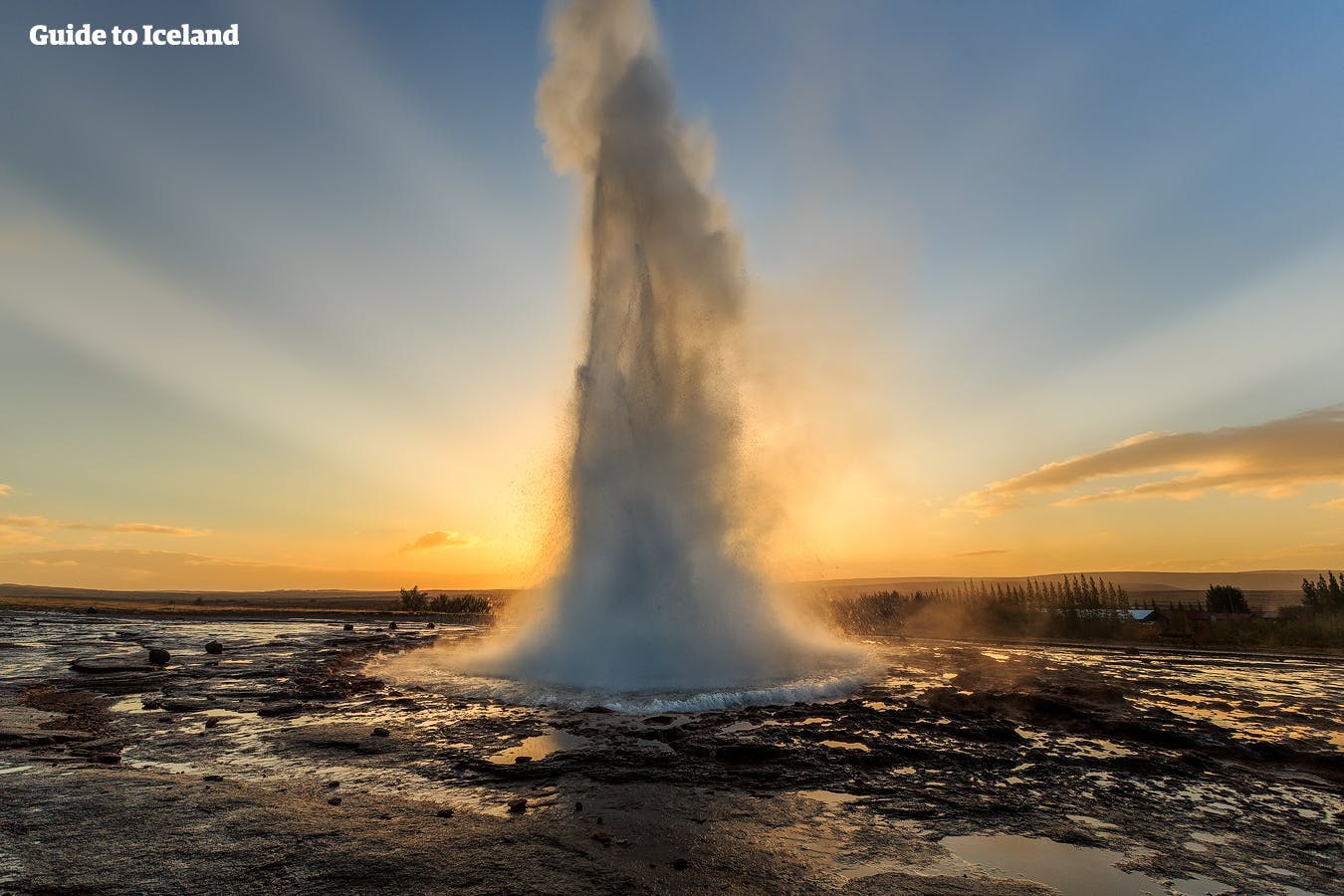 Golden Circle and the South Coast

You will be picked up from Reykjavík in the morning and head out of the city to the first part of your adventure; the famous Golden Circle route.

The first stop of the day is the UNESCO world heritage site Þingvellir National Park. Þingvellir is where Iceland’s parliament was founded in the year 930 AD. The site is located in a rift valley that sits between two tectonic plates that are drifting apart. This drift can be seen in faults and cracks that dot the area.

Your next stop is the Geysir geothermal area, where you can find bubbling mud pools and erupting hot springs. One of those hot springs is Strokkur, which erupts every 5-10 minutes, creating a column of water that often exceeds its average of 15-20 metres in the air.

The last stop on the Golden Circle route is the gorgeous waterfall Gullfoss. The river Hvítá, fed by Langjökull glacier, rushes southwards before dropping 32-metres into a canyon, creating this stunning cascade.

Those wanting a little more thrill on this day can take an optional snowmobile tour to Langjökull glacier from Gullfoss, which can be added for an additional price. A large truck will take the adventure-seekers up to Langjökull where they will get warm overalls, a helmet and instruction on snowmobiling.

While the daredevils are whizzing through the white expanse of the glacier, the rest of the group will get to fully take in the magnitude of Gullfoss waterfall or relax at the Gullfoss Café which not only sells refreshments but also books, souvenirs, jewellery and clothing.

After you’ve visited the Golden Circle, it’s time explore Iceland’s South Coast. You will drive on out to the unique Seljalandsfoss waterfall. If the weather allows, you’ll be able to follow a pathway that leads you into a cave, behind the cascading water. So you’ll get to see the surrounding landscape through a veil of fresh spring water, falling from the cliffs above.

Next up is one of Iceland’s biggest waterfalls; Skógafoss, with a width of 25 metres and a 60-metre drop. It is located near the museum Skógar, which you can visit if it strikes your fancy.

From the cascading waterfalls, you’ll travel further east to Dyrhólaey peninsula. There you’ll find spectacular views of lava rock formations in the east, the coastline in the west and Mýrdalsjökull glacier in the north.

You’ll stop at the village of Vík, where close by is the famous Reynisfjara black sand beach. Edged in by cliffs of basalt columns, this beach is one of the most beautiful locations in Iceland. Out of the ocean rises the strangely shaped lava rock formations of Reynisdrangar.

You will spend the night in a comfortable country hotel on Iceland’s South Coast. 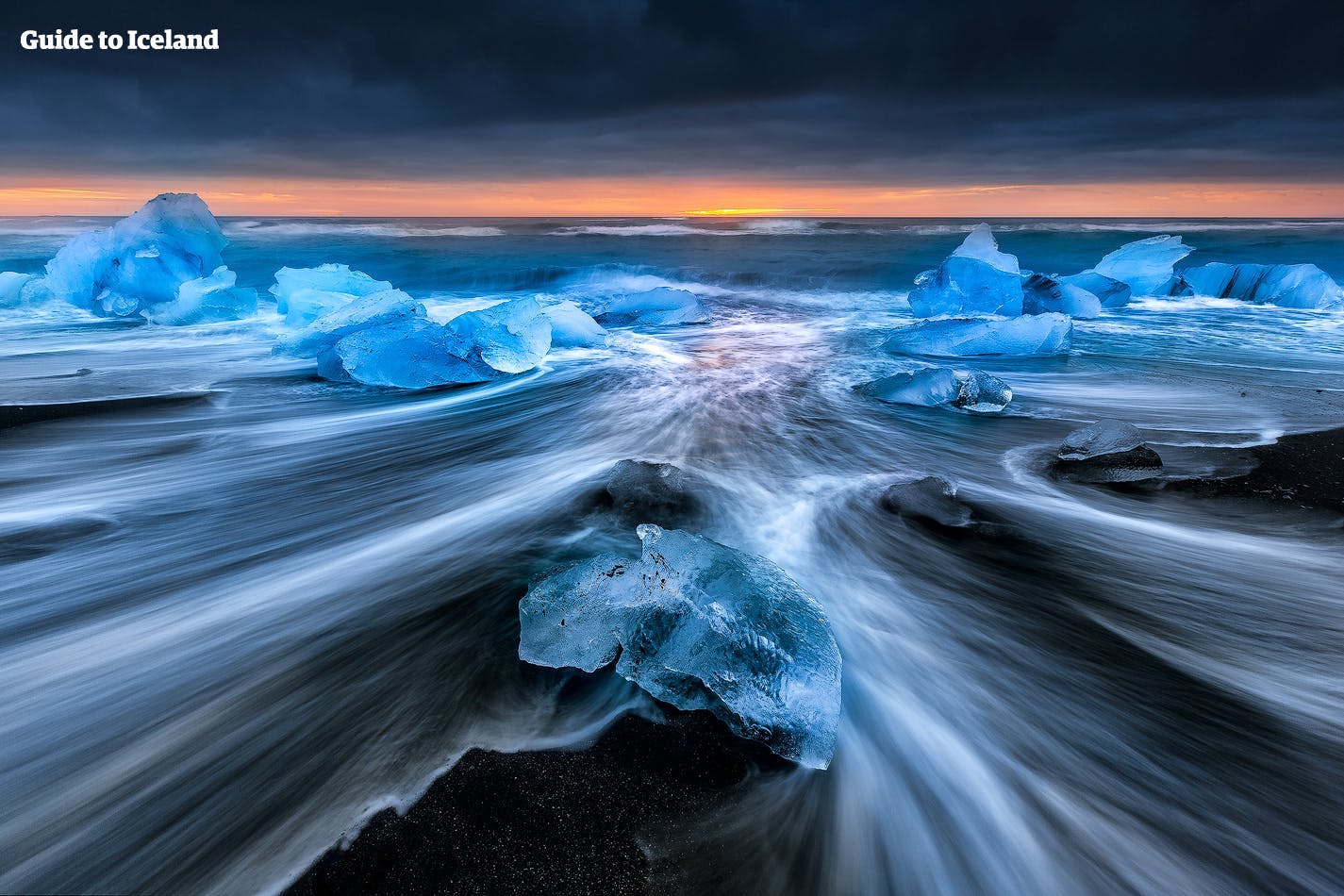 On your second day, you’ll continue your journey east. You’ll visit an area called Fossálar. This is a river containing several little waterfalls and is one of Iceland’s hidden treasure as it is not often visited by other tourists. You’ll also visit another lesser known location, Orrustuhóll, a tuff cliff-sided hill with a stunning view.

You’ll travel further east, stopping at Jökulsárlón glacier lagoon, where ice chunks from a nearby glacier break off and drift slowly out to sea. You will get a chance to see these icebergs up close on a boat ride of the lagoon.

From the lagoon, you’ll visit Skaftafell Nature Reserve, located in the greater Vatnajökull National Park. This beautiful area is filled with stark contrasting scenery. It is where lush flora grows between the black sands and a glacier tongue.

Skaftafell is filled with excellent hiking trails, and it is a popular area to go hiking up the glacier tongue. You will have the option of doing just that. You could also hike up a trail that leads to Svartifoss waterfall. This stunning cascade is framed by cliffs dark basalt columns and was the inspiration for the famous Hallgrímskirkja Church in Reykjavík.

Next up is the historic village of Kirkjubæjarklaustur. You’ll get a chance to stop there and learn about the site’s history and its folklore before heading to your accommodation for the night. 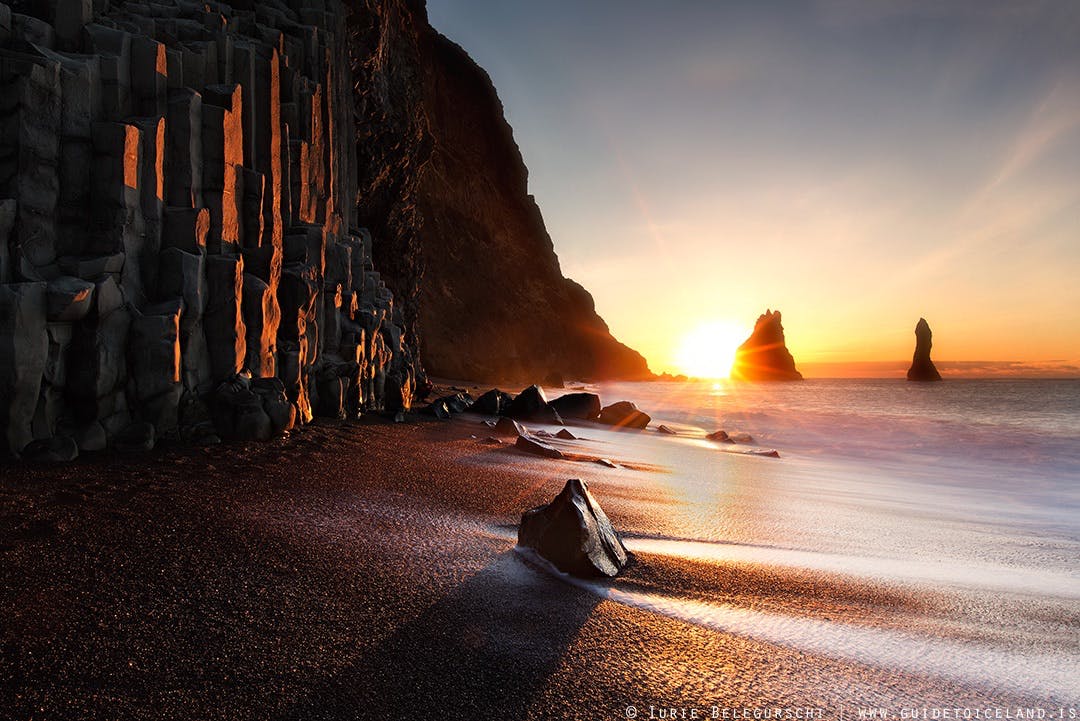 On your last day of the tour, you will travel west, heading back to Reykjavík. Before you arrive in the city, however, you will get a chance to visit some new sites and get better acquainted with others.

You’ll start the day heading west to the village of Vík, where you can get a better look at the roaring waves at the black sand beach Reynisfjara, and see the towering Reynisdrangar lava formations one last time.

You will get a chance to visit the geothermal pool of Seljavallalaug for a relaxing dip in the geothermal hot waters. You can also visit Þorvaldseyri Visitor Centre, a farm located under the infamous Eyjafjallajökull glacier volcano, where you can learn everything about living life under an active volcano.

As you head west, you’ll stop at the villages Hvolsvöllur and Hveragerði. At Hvolsvöllur, you can learn about the famous Icelandic Viking Sagas in the town's museum, and at Hveragerði you can visit a geothermal power plant.

You’ll arrive in Reykjavík in the late afternoon, so you’ll have some time to unwind in the city before dinner.

The rooms are very good, clean beds and private rooms with bath for couples and families, while friends in a group sometimes share a room. Once you have booked, we will always find the best accommodation for you.