Explore the unique landscapes of Snæfellsnes Peninsula on this two-day adventure and get acquainted with the incredible nature of West Iceland. If you’d like to get to know the culture of Iceland and witness a vast array of its natural wonders, this tour is made for you.

The beautiful Snæfellsnes peninsula is often dubbed ‘Iceland in miniature’, due to the myriad different landscapes located there. Prepare yourself for stunning coastal cliffs bombarded by the merciless waves of the Atlantic Ocean, rugged fields of lava rocks, cascading waterfalls, black beaches, majestic mountains, rural fishing villages and a magnificent glacier, just to name a few.

Your tour begins with a pickup from Reykjavík City, after which you will head up west along Route One to the town of Borgarnes. After a quick stop in this friendly municipality, the journey continues to Snæfellsnes peninsula, located less than three hours from the capital.

You’ll take in many of the fantastic sights of the peninsula on your first day, such as the black pearl beach Djúpalónssandur, the sea stacks Lóndrangar and the historic fishing villages Arnarstapi and Hellnar.

All the while, the grand glacier Snæfellsjökull looms within sight, watching over your circumference of the peninsula. You will also have a chance to admire the beautiful and photogenic mountain of Kirkjufell. Your first day ends at the accommodation in the Western part of Iceland. If you embark on this trip during the winter season, and if luck and conditions allow, the Northern Lights might always grace the night sky before the day is over.

The exploration continues on the second day when you will get to explore the area of Borgarfjörður to see the waterfalls Hraunfossar and Barnafoss, as well as Deildartunguhver, the hot spring with the highest flow in all of Europe. One of the many highlights of the tour is a caving expedition in the Viðgelmir Lava Cave with admission fee included. Then we head to Husafell and Reykholt archeological site.

Don’t hesitate in booking your Snæfellsnes Peninsula adventure now, to enjoy all of which Iceland has to offer in two, adventure-packed days. Check availability by choosing a date. 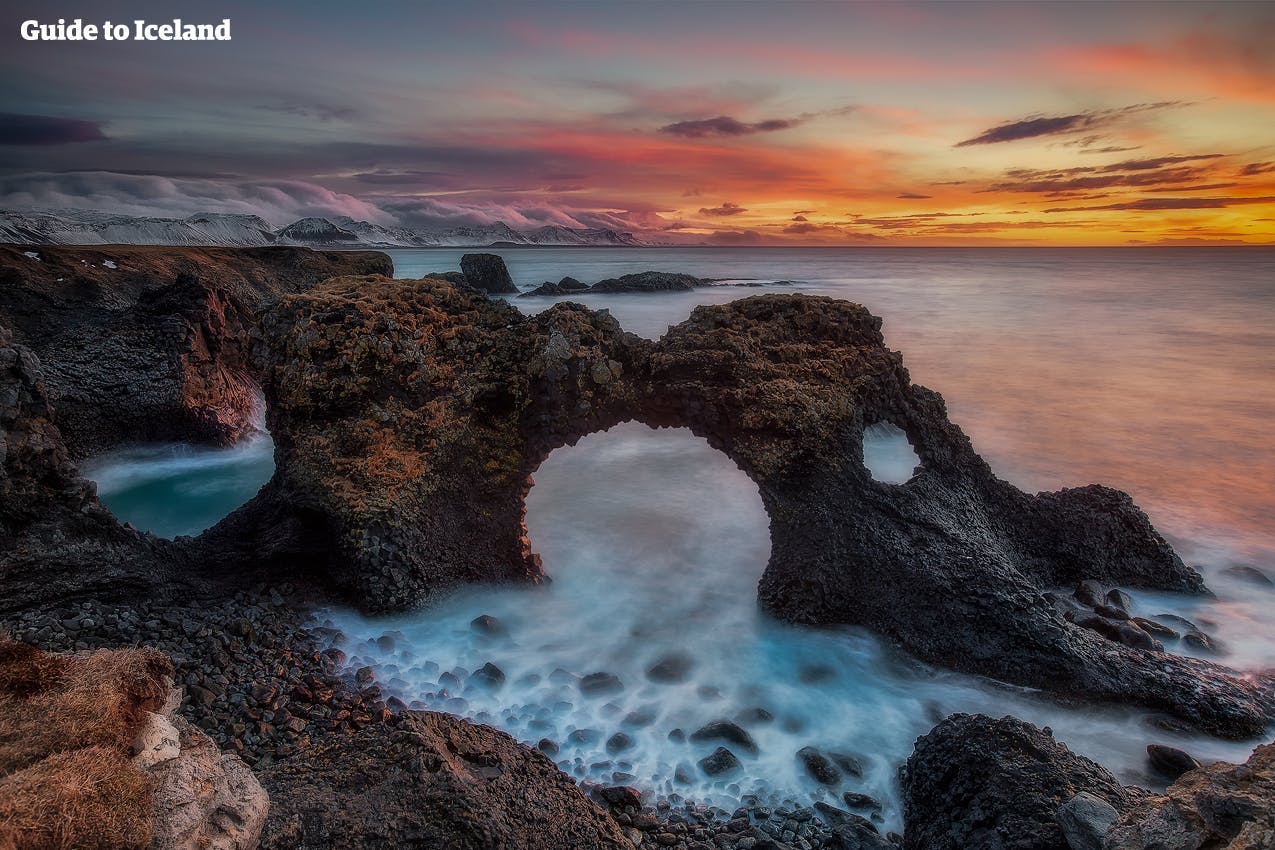 The Magic of Snaefellsjokull National Park

Today your adventure begins. After getting picked up from Reykjavík City, you will get to know your expert and friendly tour guide and head along the west coast to the town of Borgarnes.

From there, your journey continues to the beach at Ytri Tunga, a famous seal colony. You never know if you might spot a couple of these adorable and curious creatures lounging on the shore.

Next up are the ancient fishing hamlets Arnarstapi and Hellnar, where you’ll embark on a scenic hike boasting breathtaking views of the seaside.

Then, get ready to discover the unique rock formations at Djúpalónssandur, a beach of black pearls, and hike up to the 70-metre tall rock pinnacles Lóndrangar. The scenery on hand will include the glacier Snæfellsjökull in all its glory, the backdrop for Jules Verne’s very entrance to the centre of the earth.

At the end of the first day you will give a visit to the majestic Kirkjufell mountain, which is one of the most popular photo stops in Iceland. If you have not used your camera before on the tour then this one is a must! After this visual feast, your day ends at the accommodation in the Western Iceland. The Northern Lights are known to play their amazing symphony of lights in this area if the conditions are favorable. 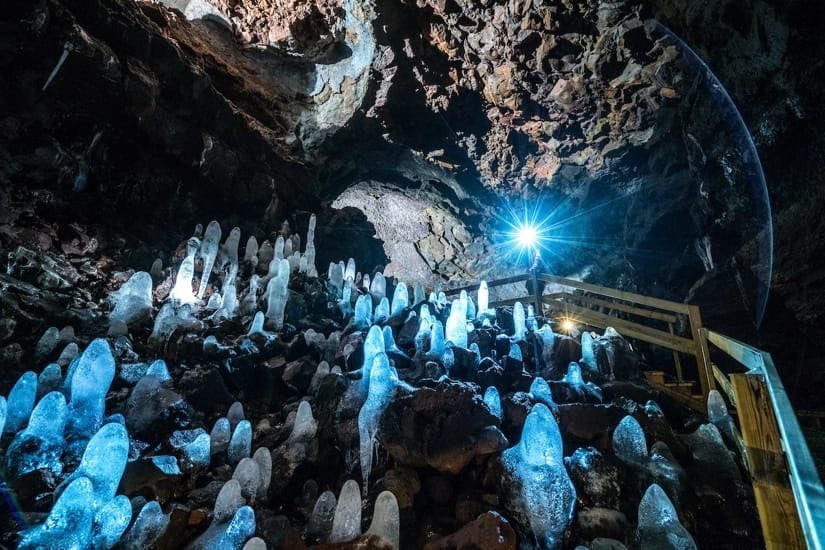 After a refreshing rest and having breakfast at the hotel we will turn East travelling along Silver Circle Route. Your day starts with a visit to the historic Borgarfjordur area. First on the itinerary is a visit to Deildartunguhver, famed as the most powerful hot springs in Europe. It produces more than 180 liters of boiling hot water per second! You can feel the fierce power of Mother Nature as you walk safely on boardwalks through billowing clouds of steam around the bubbling hot springs, or just see them from the viewing platform.

Our next stop is at great Hraunfossar (Lava Waterfalls), a series of waterfalls formed by rivulets streaming over a distance of about 900 m (almost 300 ft!) across the Hallmundarhraun lava field, which flow from an eruption of one of the volcanoes lying under the glacier Langjökull. The waterfalls pour into the Hvítá River from ledges created by less porous rock in the lava.

Literally a stone’s throw upstream from Hraunfossar, you will visit another waterfall called Barnafoss. Its name, “the waterfall of the children,” comes from an accident which is said to have taken place here in a previous century. There was a natural stone bridge over the waterfall, and two children from a nearby farm fell to their deaths crossing the river on the bridge. Afterwards, the grief-stricken mother had the bridge destroyed.

The highlight of the tour is a visit to a colorful Viðgelmir Lava Cave. Just shy of 1600 meters the cave features amazing colors and lava formations that lurk in the depths of the earth. During this 1,5 hour long expedition you will have a change to see one of the largest lava caves in Iceland with its stunning lava stalactites and stalagmites. The area surrounding the entrance to the cave will allow you to realize how powerful eruptions of volcano can be.

After nearly 2 hours spent deep below the surface of the Earth, we will end our tour in the woodland oasis of Husafell. Husafell is a magical place to unwind after a day of wonder, with birch tree woodlands, waterfalls, rugged lava fields, crystal-clear water springs, medieval remains and much more to see.

Finally, take in the sights at Reykholt. There you will see Snorralaug (Snorri's Pool) - small hot spring where local people have bathed since the 12th century. This pool was first mentioned in the medieval writings of Snorri Sturluson, a famous Icelandic poet and chieftain, who used to live and bathe here too. Snorralaug is now a protected archaeological site, and Snorri's story is a very important part of Iceland's history.

There will be time to take pictures of the beautiful old timber church here, which dates back to the 19th century. You can take a look inside, where a viewing glass to a medieval smithy cistern can be seen.

Then, it is time to head back to Reykjavík City; you’ll arrive in due time to enjoy a night in the capital and reminisce about your unforgettable, two-day adventure in Western Iceland. Don’t wait any longer to secure your spot on this trip of a lifetime.

If you are a single traveller, then a Single Room Supplement of 6.000 ISK is mandatory.

Only small carry-on luggage such as backpacks are possible.

Please check with your hotel if they can store your luggage during the tour if you are staying again at the same hotel after the tour.

To avoid any delays in departure luggage must be in storage before pick-up time.