My Trip To The Golden Circle

No matter how long you are staying in Iceland, 2 days, 2 months or 2 years, the Golden Circle includes everything you really HAVE TO see. An hour and a half later than expected (time management…) we set off to Thingvellir together with our good friend Jan. 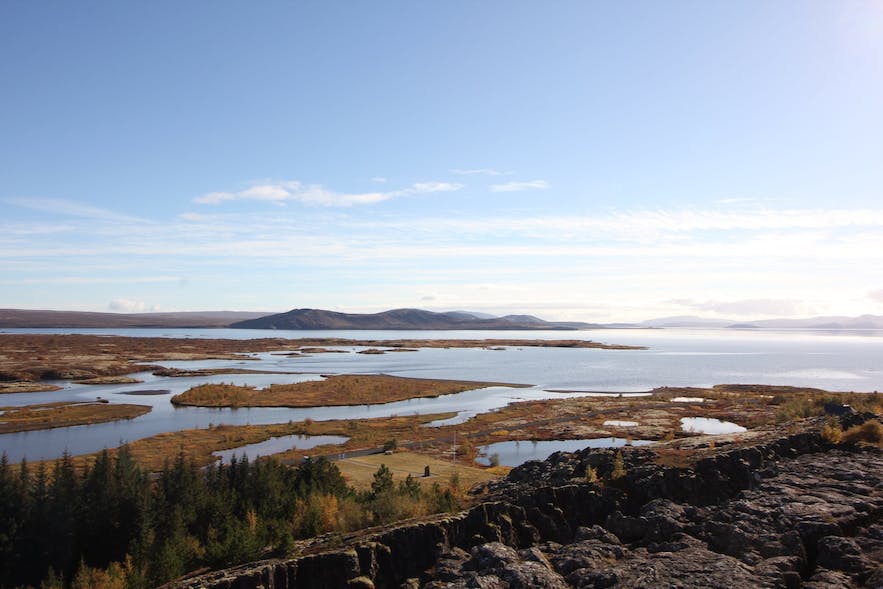 Thingvellir is the Icelandic word for: “The plain of the national assembly”. From the 10th century on the Chieftains representing all parts of the country met here once a year to discuss the law. Nobody wrote down the law in that time, so they needed a lawspeaker to recite the legislation (and had to set faith into his good memory). One can still see a plate with the names of all women and men on it that had been condemned to death up to the 18th century. The men beheaded, the women drowned. A history teacher once told us: If you are ever unhappy with your job, think about the man whose job it was to pull a woman’s head underwater until she stopped struggling…

The whole place itself isn’t as impressing as one might imagine. Of course, the landscape is beautiful… But honestly, is there a place in Iceland where it isn’t? Still, Jan took the chance to film the little streams in the manner of a famous filmmaker. (Whose name I really don’t remember…) What I have learned though is that you have to run back and forth over all the little bridges to do so. I haven’t seen the results yet. But yes, that looked professionell. :D 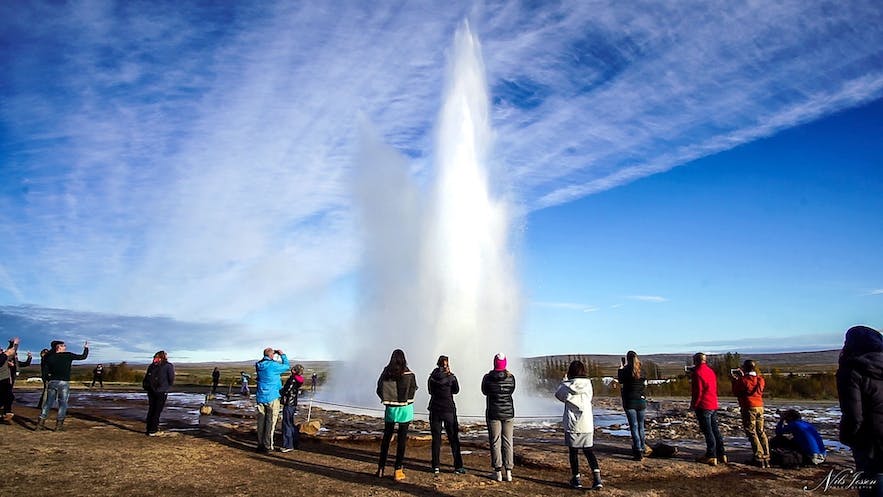 The second stage of the Golden Circle was (visually) more impressive: Real geysirs! Or in fact - THE Geysir. The one which all geysirs in the world were named after and who is moreover the second largest on earth. Unfortunately, this original-geysir erupts very rarely… But right next to it, there is a smaller one, Strokkur - Still the world’s fourth largest. This one erupts reliably every few minutes. Precisely everytime when I had just stopped recording or when the battery of my cellphone or the Osmo had run empty. But one time, the timing was just perfect! The water started to bubble, I instantly turned on the video and pointed my cellphone right on it. And then, the moment the water rocketed upwards I was so surprised I accidently hit “break”...

From that moment on I left it to Nils and Jan to make great shots and enjoyed the spectacle and the other tourists’ enthusiasm. After all, the “running towards the geysir while it erupts”-thing didn’t really work out*, so the guys put up the drone. It sounded like a swarm of angry hornets circling our heads. At least we attracted the attention of all the bystanders… Until an asian guy turned up with the more expensive model, bigger, louder, fancier…
Maybe the guys shouldn’t have daydreamed that much about a new drone, maybe that was karma… But that is a story for another day!

* In fact, the omens aren’t that unequivocal. Therefore Jan couldn’t take more than 2 steps before the water had already reached its zenith of 20 metres… 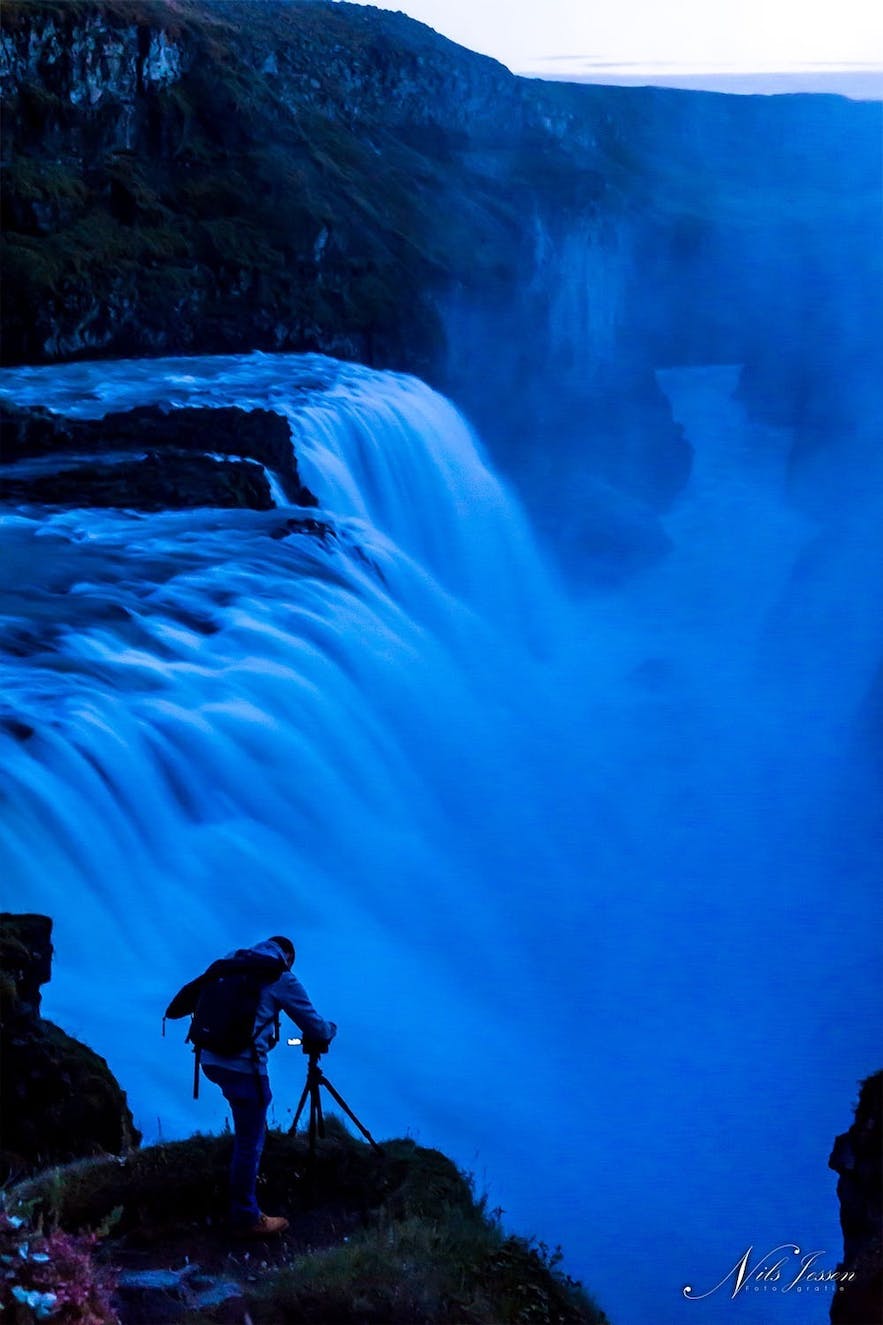 And so we continued driving to the Golden Waterfalls (Gullfoss). At sunlight they are said to really shine golden. But dusk was already approaching when we arrived… We definitely have to work on our time management! :D 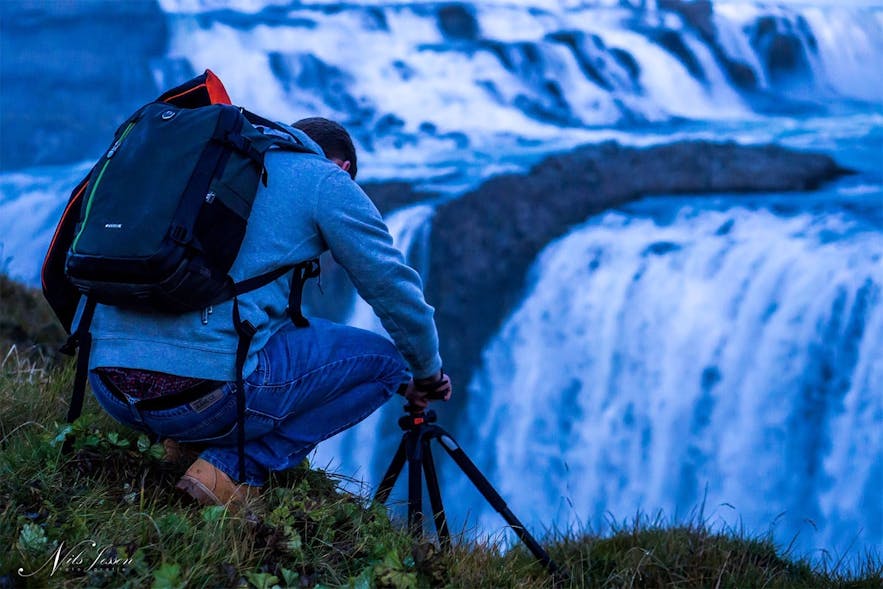 But even in blue-white the waterfalls were still impressive enough to spend a lot, and I really mean a LOT of time on taking pictures… While Nils and Jan still stood on their first spot, photographing and flying the drone along the canyon, I had already walked all the way down to the water, had made new acquaintances and had even become part of the family-portrait of a huge asian family. :D 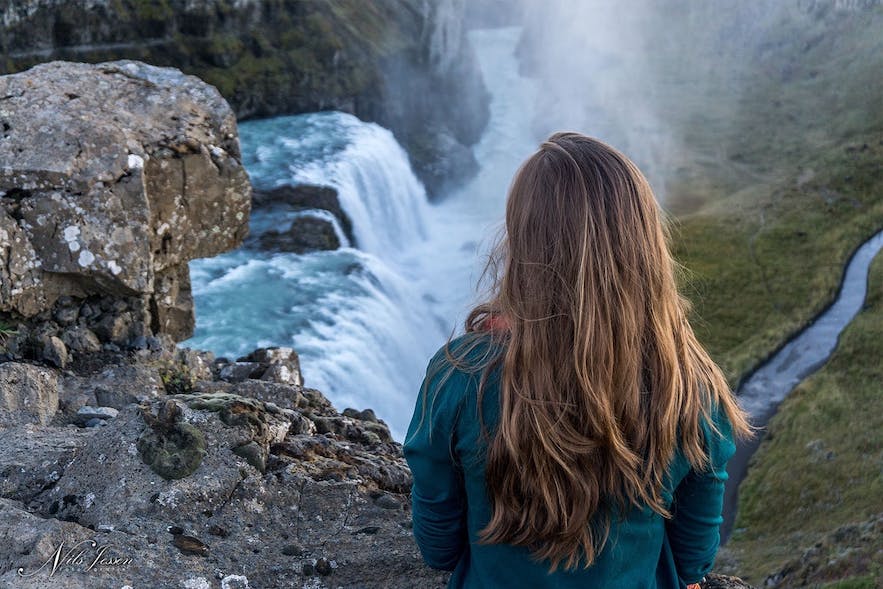 Or rent a car and discover the Golden Circle on your own!
Find the cheapest car rentals here: Rent a Car!

On my search for turf houses around Iceland, I visited Sænautasel hypothetical turf house on Jökuldalsheiði heath in the highlands of Iceland. It is, …
Read more
Guide to Iceland
Connect with locals
Nils Jessen
My Trip To The Golden Circle