HVERFJALL as a Photography Location

Ever since I arrived to Iceland for the first time as a photographer the iconic black volcano crater Hverfjall, next to lake Myvatn, has had a special place in my heart.

The crater was formed during an eruption 2500 years ago and during the age of settlement the crater was nearly engulfed in flowing lava due to a nearby eruption at Namafjall. Hverfjall is part of the Krafla fissure swarm, which to this date is a geological very active area, with an extensive network of hiking trails.

It’s possible to climb and walk the 3km path around the rim of the crater, which in my opinion is one of the most impressive easy-to-access experiences Iceland has to offer. Not so much for photography, but simply to experience the sheer size and roughness of the highlands.

The walk up there takes around 25 minutes, dependent on where you park. There’re several parking areas along the gravel road leading into Hverfjall. There’s no road service on the road during winter, so you might be forced to park next to the main road, which leaves you with an additional 3km of hiking. During winter and spring the road and crater can also be very icy, so I’d suggest to bring a proper pair of crampons. 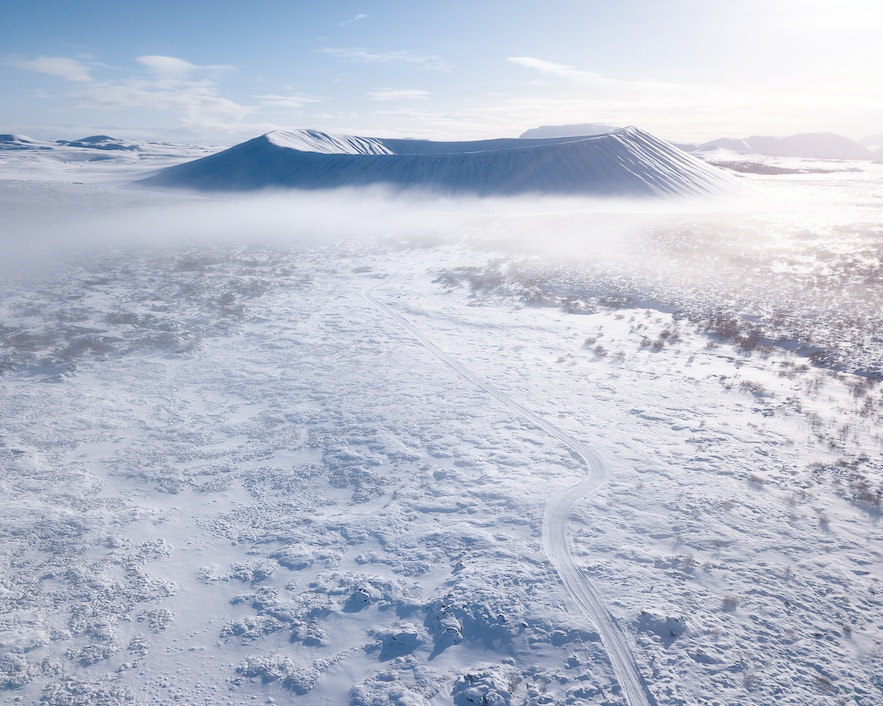 All year round you can go on the famous self-drive tours. Personally I like these as you can schedule your own time and decide what to see and do. Check out this 10-day tour, which brings you past Myvatn and Hverfjall.

If you’re more into a guided tour, check out this super popular 8-days and 7-nights tour around Iceland, which also brings you past Hverfjall.

If you only have 5 days? That is no problem either, check out this winter tour with a great group discount!

Admittedly making impressive photos from this location is not easy and you’ll have to think a little out of the box to succeed. You can photograph the crater from the main road, which can make for an impressive panorama.

Hverfjall is fairly long relative to its height seen from the side, which doesn’t translate easy to the regular 2:3 or 3:4 formats, but as a panorama it works very well. With the constantly changing weather and seasons the crater varies quite a lot in how it presents itself.

I’ve experienced it during all seasons with huge variety. Both fully and partly covered by snow and without any snow at all. I’ve seen it during autumn, with autumn colours on the surrounding trees and bushes, during winter in fog and during night with the auroras dancing above. As with all landscapes it’s all about capturing it during those special conditions.

The go-to focal length being on top of the Hverfjall is a broad one to take in the entirety of the crater. In my experience that doesn’t really work as the crater becomes very elongated and flat.

I’ve had the most success with vertical photos, using the crater as a foreground with a beautiful display of auroras above and longer focal lengths of 35+ mm, using one of the background mountains as the focal point. You can also use a telezoom lens and photograph people walking on the opposite side of the rim using the natural lines of the crater as leading lines. 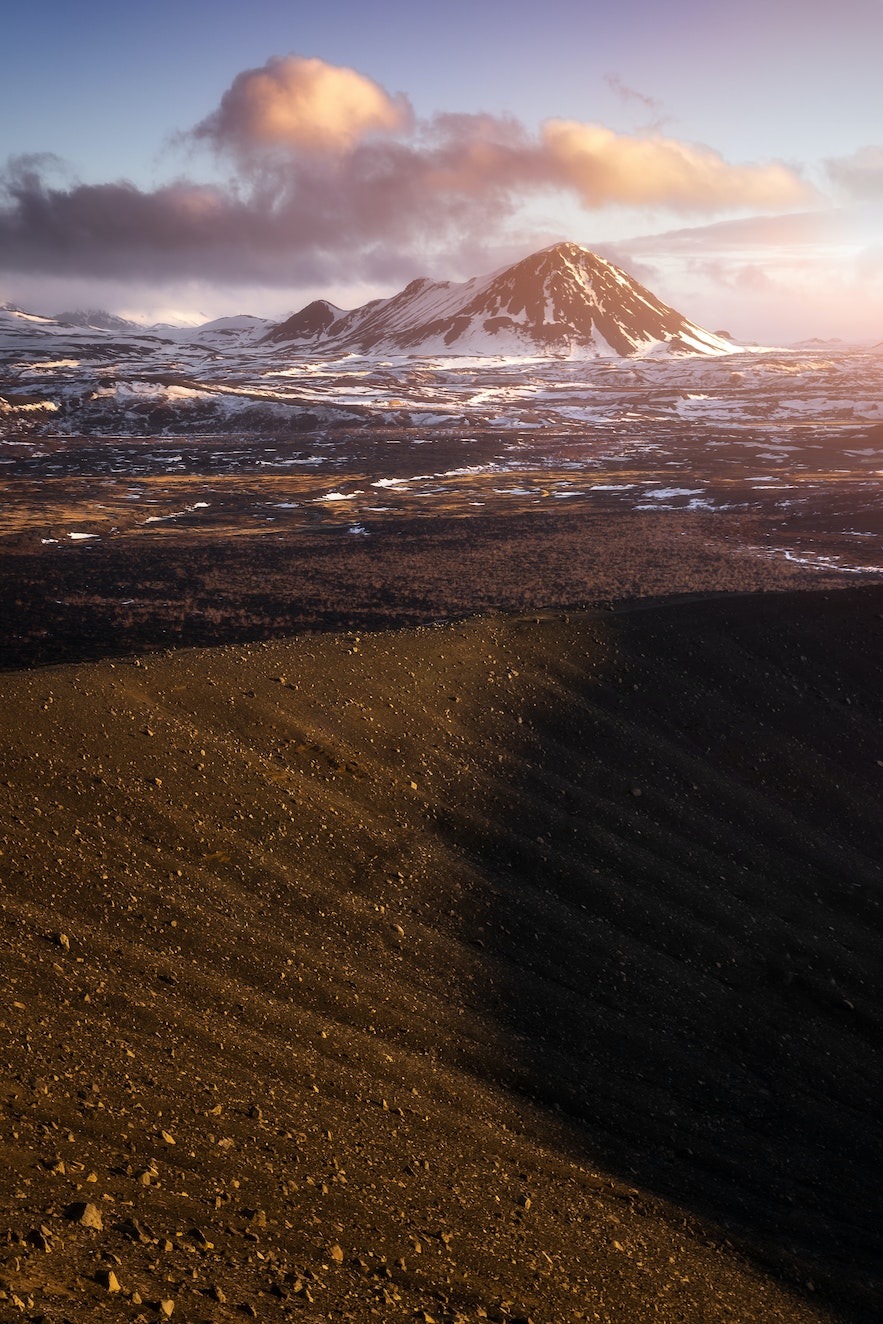 With a drone you’re of course more free to choose your composition and the crater really comes to its right from above. Do keep your attention on the power of the wind as I’ve already stated sudden gusts can appear out of nowhere even on days which should be still!

From above, the crater just looks massive! Even with the drone you might only be able to photograph parts of Hverfjall, which by no means is a bad thing as you can use the rim of the crater to create leading lines and interesting texture.

When it comes to drones the same approach applies as during regular photography from the ground. Interesting light and conditions, leading lines, shapes, patterns, depth and so forth are all tools you can use to create an interesting photo. 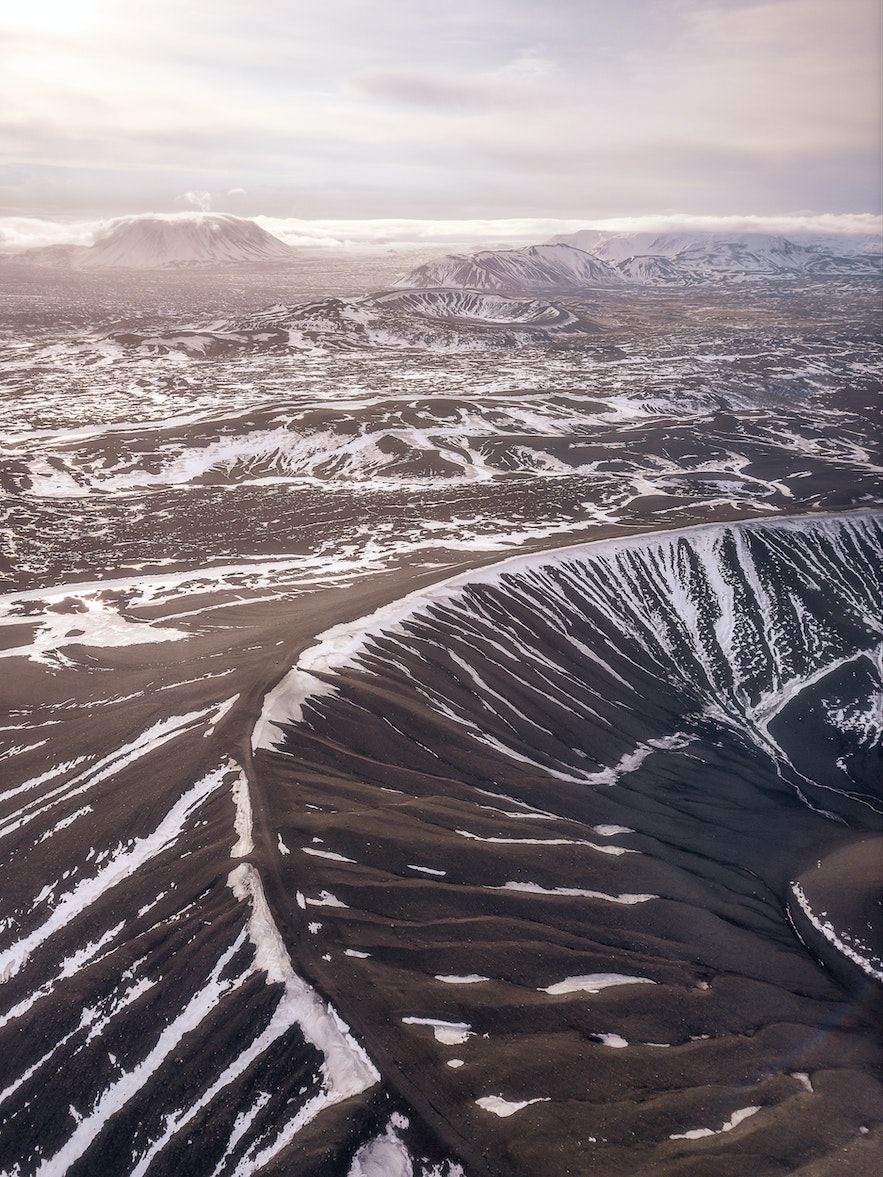 Are you interested in seeing Hverfjall from above, but you don’t have a drone? No worries! You can hire your own plane to fly you around the area. Check out this fabulous flight tour of the Myvatn area. 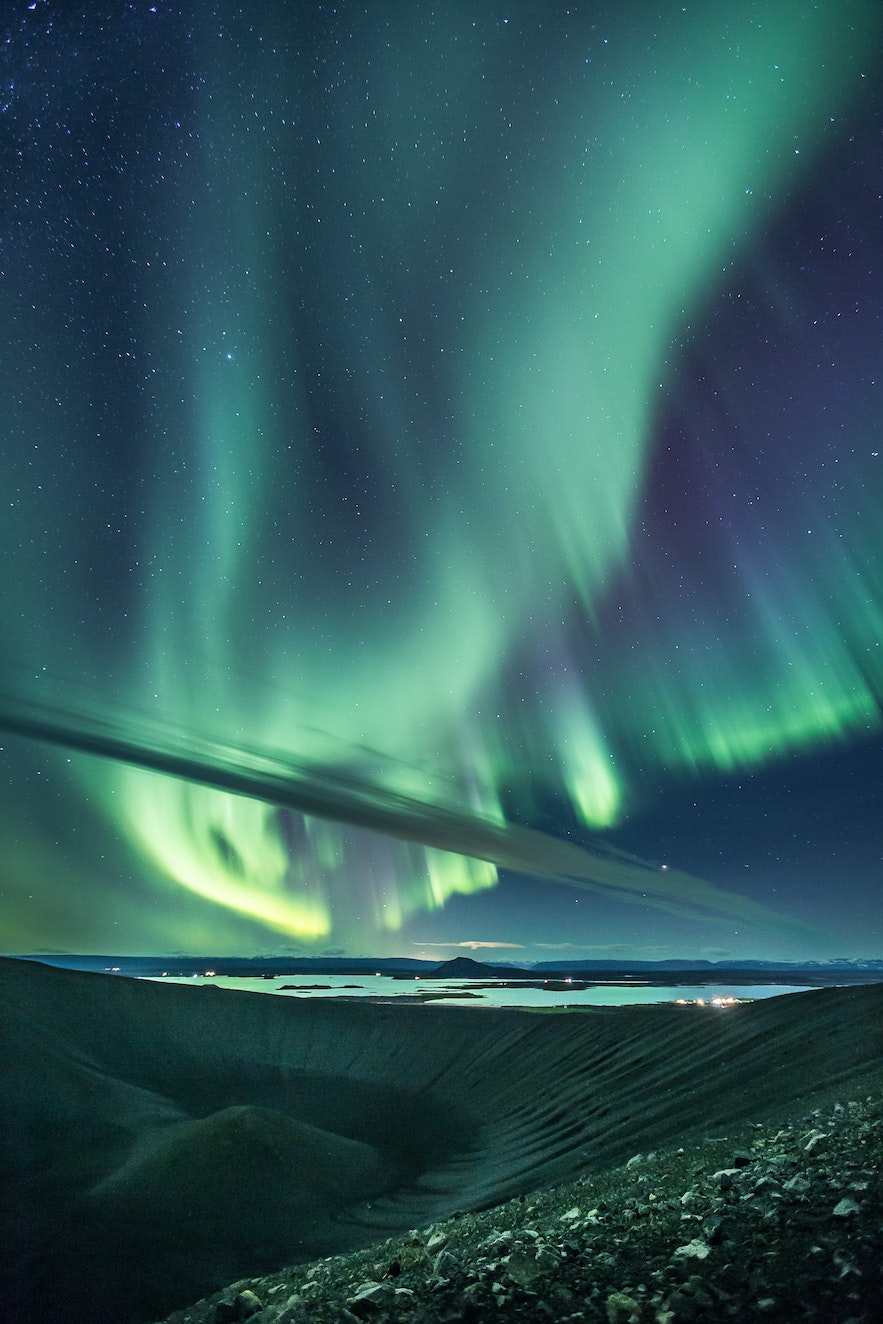 Hverfjall is a location which is hard to ignore and I hope I’ve convinced you not to! The massive crater is in my opinion an absolute must visit and it’s next to nearly impossible to miss it no matter how you approach the area. For photography it’s harder than most locations in Iceland, but for enjoying Iceland for what it is, Hverfjall comes highly recommended!

Another super popular tour is this 14 days self-drive tour that leads you all around Iceland during the summer season.

If you’re more into winter wonderland, that’s not problem either. Check out this winter itinerary.

If you want to see my video presentation from here, which includes a lot of epic drone footage and time-lapses, be sure to check it out in the video below.