Mt. Kirkjufell as a photography location

In the landscape photography community Kirkjufell is the most iconic mountain in Iceland. It’s located by the small town of Grundarfjörður and has been used as a backdrop in both Game of Thrones and the Secret Life of Walter Mitty. I remember the first time - on a self-drive tour in Iceland - I followed the bend in the road and the mountain came into view. Seeing and approaching Kirkjufell for the first time I got that childish excitement about being in a location which I’ve seen so many times in pictures. 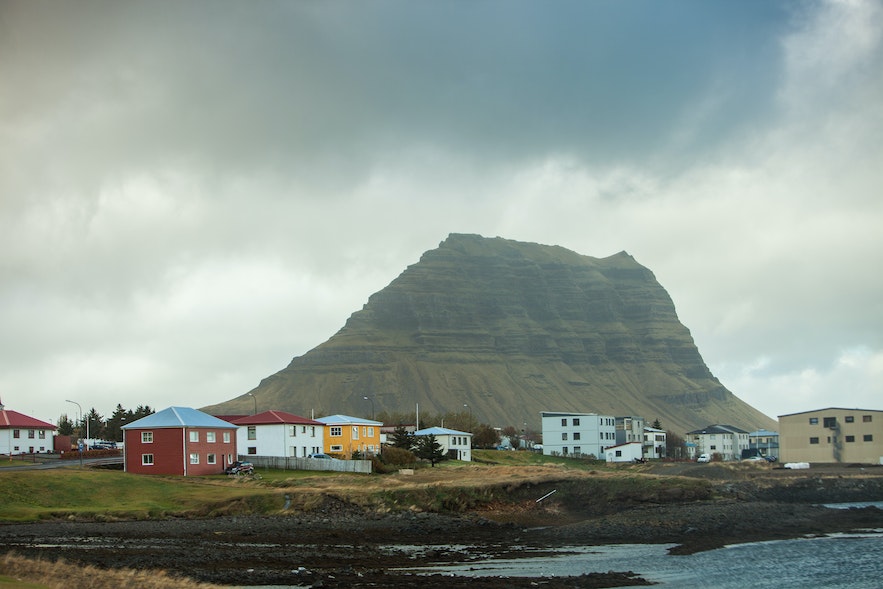 I also remember my first surprise thinking “wow, that mountain is big!” Most pictures taken at Mount Kirkjufell are wide-angle shots with the Kirkjufellsfoss in the foreground. Because of the wide angle the foreground and background gets stretched, so the background seems smaller than it really is which results in you getting a bit of a distorted impression of the area. 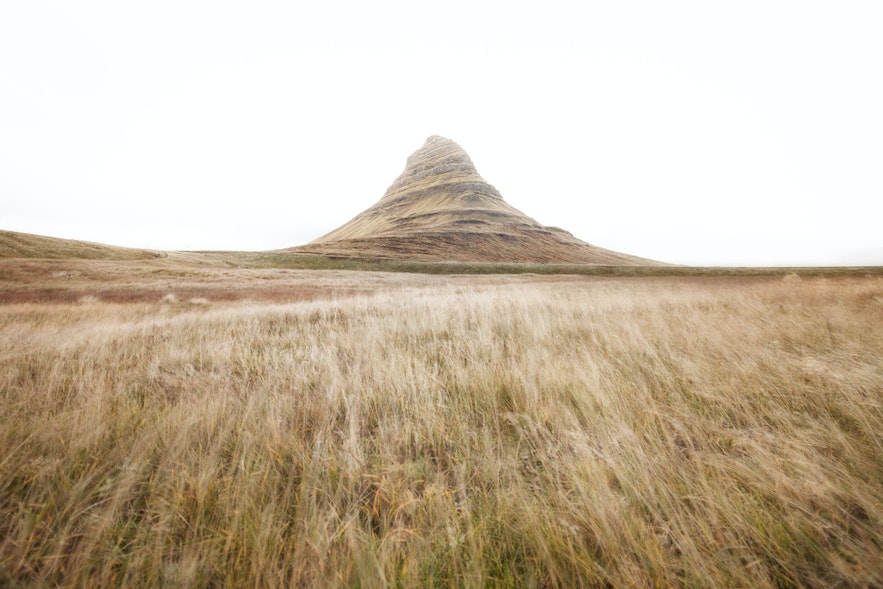 With the shape of a pyramid, the mountain is in itself very photogenic, but it’s the entire area which makes this location so special. You have black sand, water for reflections, tall grass, streams, waterfalls, often you have low hanging clouds. If it’s night you have the stars and the northern lights. If the weather is bad you’ll probably not have to wait for long before it changes. In the summer time the sun sets and rises behind the mountain, which makes for some incredible golden hour photos. Kirkjufell is a buffet of amazing compositions and light. 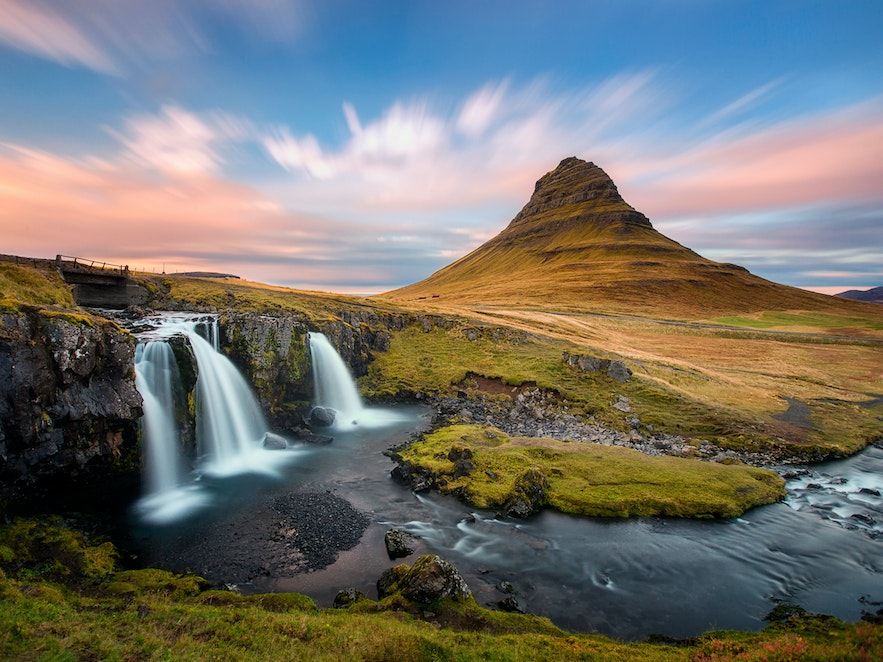 For the iconic shot of Kirkjufell and Kirkjufellsfoss you’ll have to go wide angle. A 16mm works really well, but if you have a 14mm you’ll be even more free to choose your perfect composition. 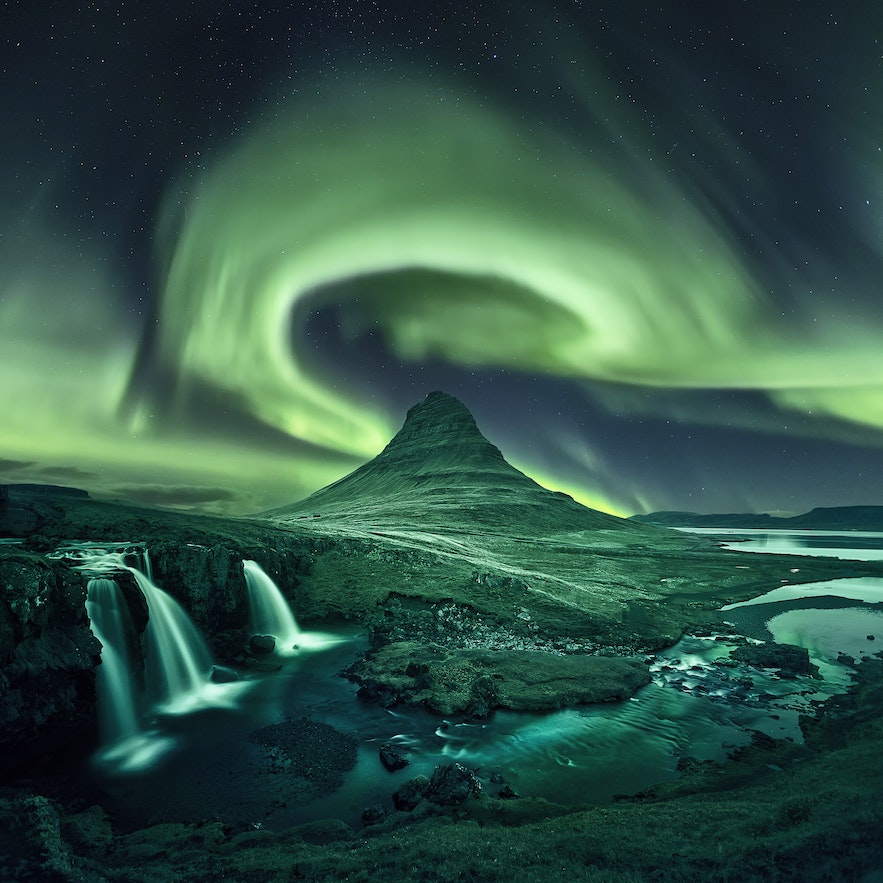 A thing to notice is that you’ll probably not be the only photographer there. And if you don’t want to photograph in a place where everybody else is, there’s plenty of opportunities around the town. Just east of the town you’ll find Grundarfoss. To get to Grundarfoss you’ll have to park the car at the parking lot, where there’s a sign to the waterfall. After that, you’ll have to go for a little walk. It’s easy to get close to the falls, but not a lot of people do it because of the long walk.

When you’re getting close to the waterfall try to avoid the slopes of the mountains as much as possible and use the small paths in the grass instead – it’ll make it much easier, even though it’s not the straight line to the waterfall. When you’re up by the stream you need to be careful! It’s one of the most slippery environments I’ve experienced in Iceland. Going this close to the falls, taking photos too and returning to your car takes around 1-1½ hour. 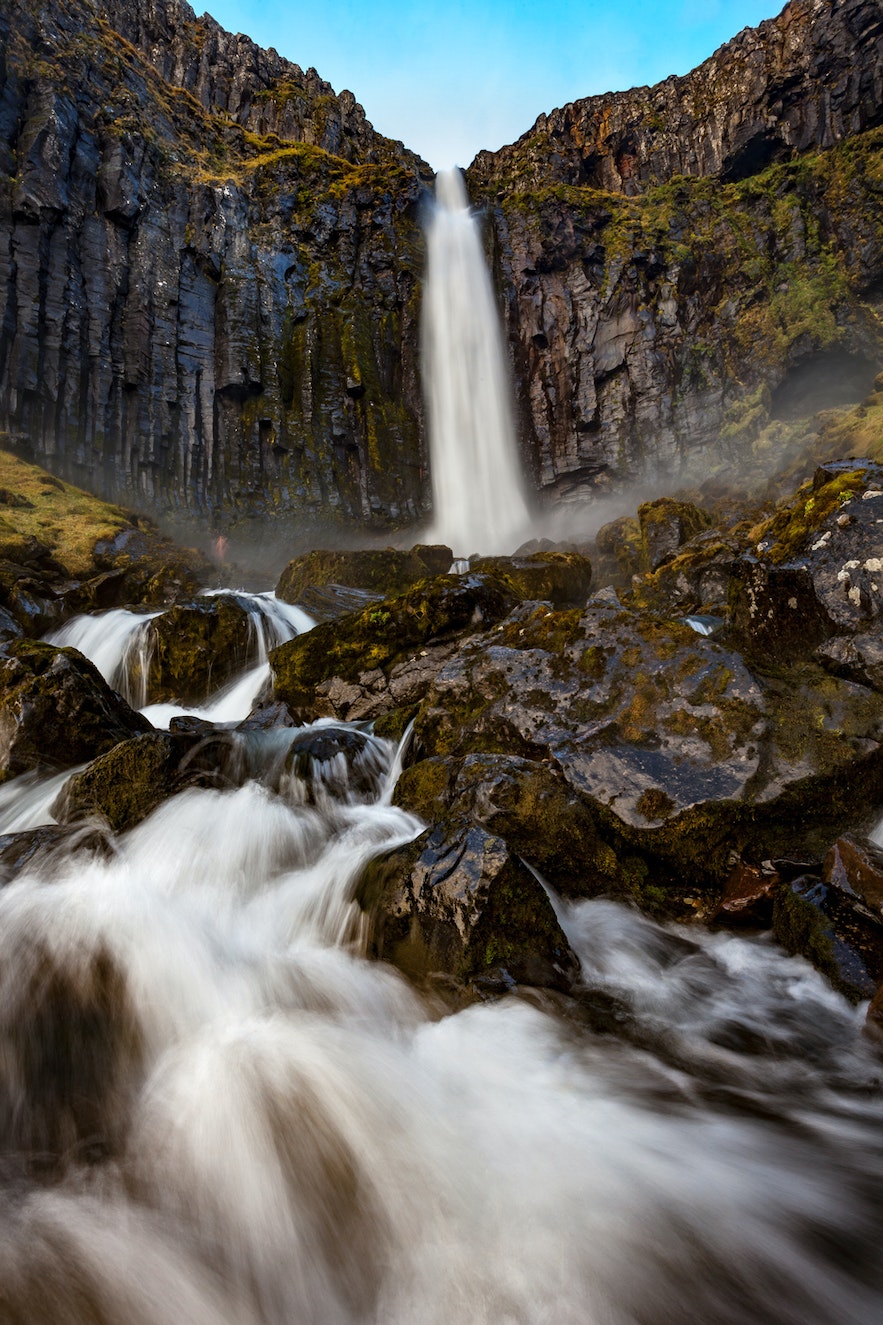 Just west of the town but before Kirkjufell there’s another waterfall up a hillside. You can see it from the road, but getting closer to it, it disappears behind the hills. It’s gorgeous and very minimalistic. Getting to this place also takes a little hike, but is well worth it. 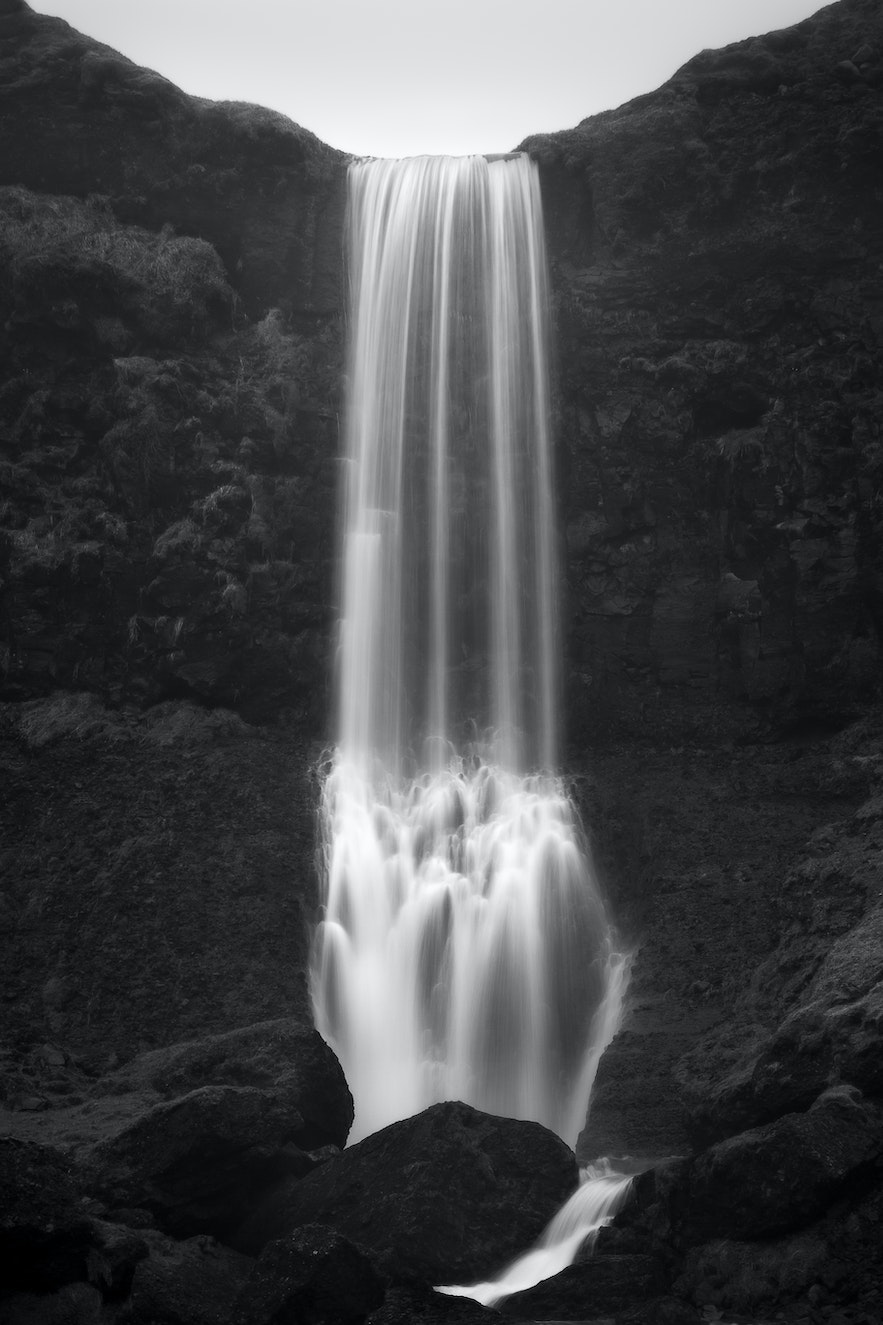 Taking the road further towards Olafsvik there’s plenty of waterfalls to shoot. One of my personal favourite photographs is from a waterfall located between Kirkjufell and Olafsvik. The picture was taken on a foggy summer night where the weather was rather boring, but that’s in my opinion often a good thing, because you’ll avoid the harsh shadows and you don’t need an ND filter to make long exposures. I can highly recommend a self-drive trip in Iceland - it makes it all so much easier! 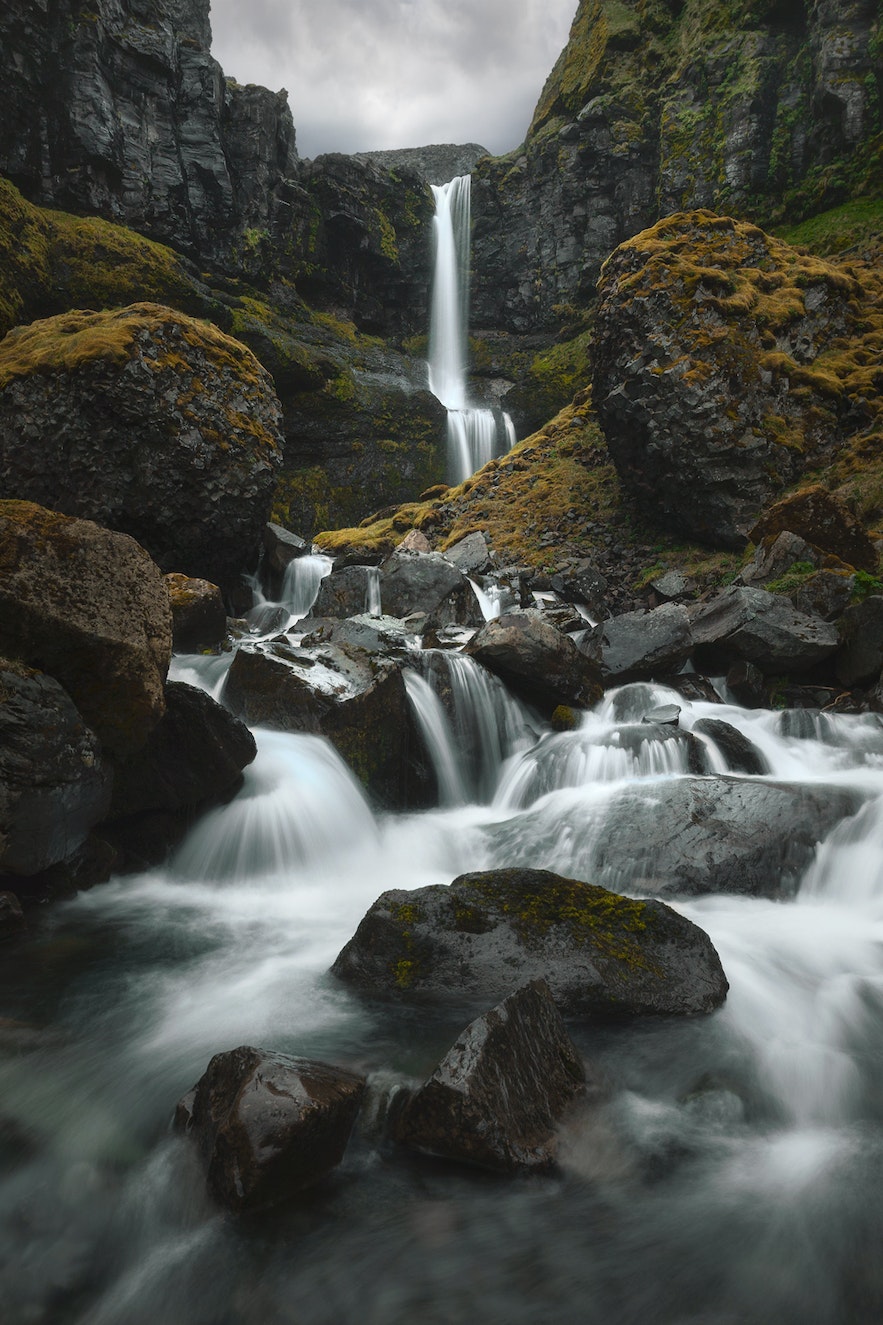 I also have a YouTube video from this location and a lot of other guides to the different locations in Iceland.

You can also check out my website here, follow me on instagram or look through my pictures on 500px if you like! If you want to buy any of my pictures as beautiful high-quality prints check out my Society6 page.