Do you miss the good ol’ days when plumbers rescued princesses in a land of mushrooms, and pizza-obsessed reptiles fought the forces of evil from their sewer hideout? When a group of sword-wielding cat people protected the inhabitants of Third Earth and Prince Adam would get superhuman strength by summoning the powers of Grayskull? (Seriously, was everybody on drugs in the 80s?)

Well, you’re in luck! There is a place in downtown Reykjavík that lets you feel like your old teenage self again. A place where those suffering from a bad case of nostalgia can come and relive their glory days of the 80s and 90s. It’s called Freddi Arcade & Toy Museum. 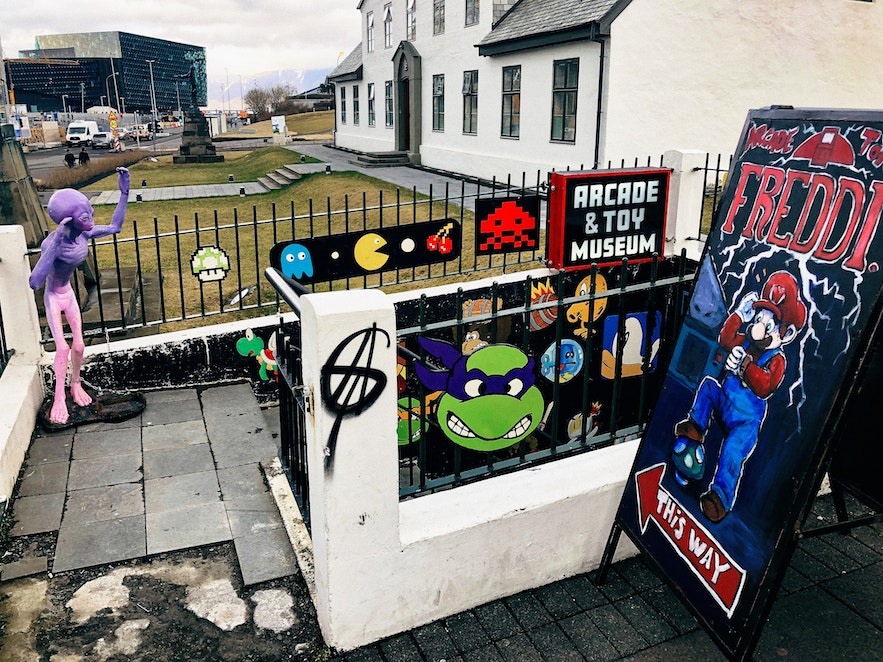 On a grey, rainy day, I found myself with some free time on my hand, so I moseyed down Laugavegur shopping street to the historical Bankastræti to visit the arcade. If you are unfamiliar with downtown Reykjavík, Bankastræti is a short stretch of road leading from the west ends of Laugavegur and Skólavörðustígur street to the intersection at Lækjartorg Square.

At the bottom of Bankastræti, right before the intersection, is what Icelanders like to call “Núllið” (The Zero), or Bankastræti no. 0, due to the fact that it is below all numbered houses. Núllið is a set of public toilets. The men's toilet on one side of the street and the women's on the other. And here you’ll find two of the more interesting museums in Reykjavík.

The toilets aren't actually in use. They were closed down for various reasons (read: drugs, vandalism, fights, etc.) in 2006. The city of Reykjavík thought that the best use for old, public toilets would be to utilise the space for something more cultural. So in 2016, the most fitting thing opened in the women’s facilities: The Icelandic Punk Museum. Then in 2018, Freddi Arcade & Toy Museum moved in the men’s.

Just like the home of our favourite crime-fighting turtles, both Freddi and the Punk Museum are underground, but you should be able to find them both easily. The Sex Pistols logo, a decorated M&M mascot and a couple of Jolly Rogers will lead you to the Punk Museum, and pictures of famous, video games characters such as Sonic the Hedgehog, Pac-Man and Space Invaders line the stairs that lead you down to Freddi Arcade. 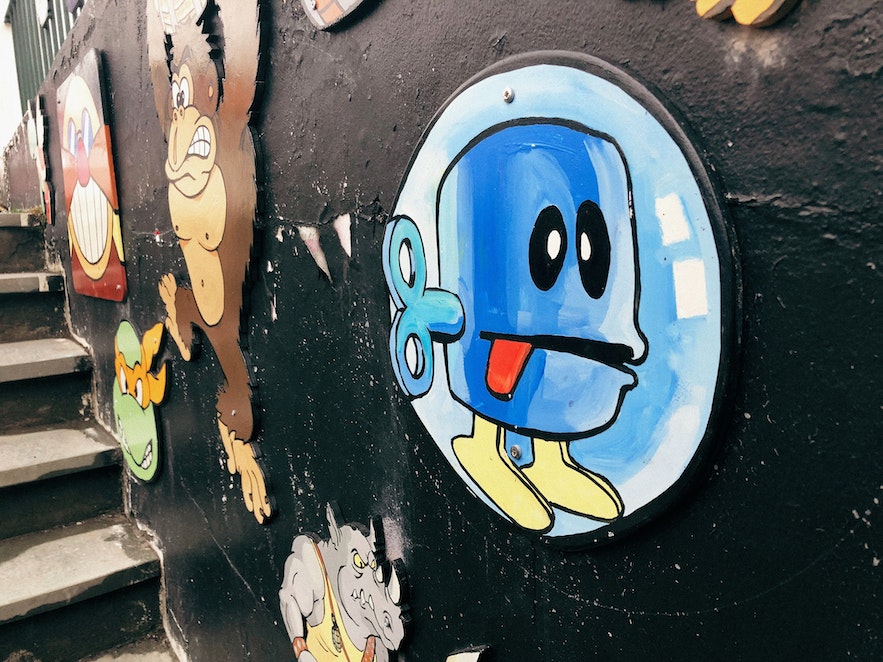 On the day of my visit, I followed the electronic figures down the stairs to Freddi and was immediately greeted by familiar noises of my childhood. Pings and clacking sounds of the pinball machines filled the room, and from one corner the deep, authoritative voice from Street Fighter exclaimed: “Ready, Fight!”.

I looked around the dark room, which was mostly lit by the machine’s screens and blinking lights. On every wall, there was a picture of a superhero or a video game character. Near the ceiling were two shelves packed with the toys from my past, one filled with various action figures and the other one was solely dedicated to Star Wars. 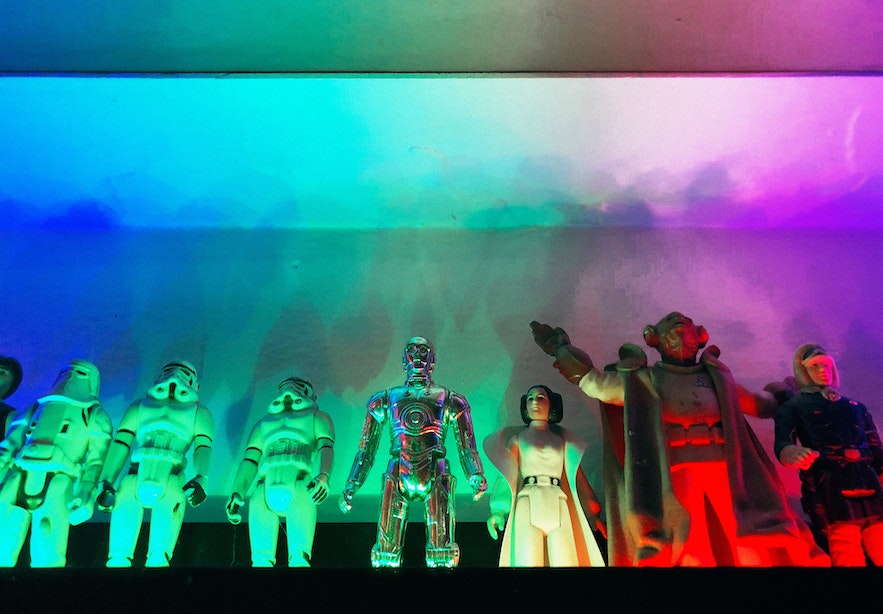 I looked around and noticed that in every nook and cranny of this small space was an interesting toy. A stuffed ALF hid in one corner while Ash from the Evil Dead movies wielded his chainsaw on a shelf near the cash register. Keeping watch over said register was a plastic E.T. and an old-fashioned boombox. Even the floor had pop culture reference as it had been covered in old covers of He-Man comic books.

Amidst the sparkling lights, clanking noises and toys stood my friend Sunna, one of the people who run the arcade and museum. “This is my life now,” she said smiling as she walked over to an Addams Family pinball machine and began to take it apart. “It's 2018, and my job is to line up Star Wars figures and repair pinball machines. It's amazing!”

I walked around and tried to count how many toys from my past were here, and Sunna told me about the various action figures on the shelf above the arcade games. There is a Han Solo figure with an abnormally large head, and I noted that it looks a bit weird. “Yeah, it’s actually a collectable” Sunna said. “A few of these defected Solos were made, and now they’re worth a bunch of money. In fact, most of these toys are worth a lot of money”. And to think! I threw most of my old toys away. IDIOT! 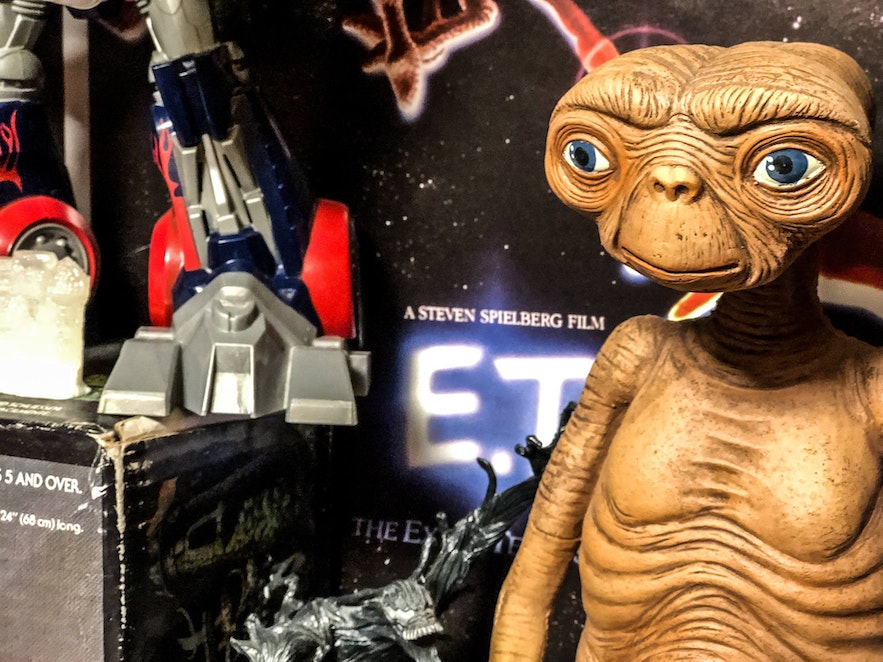 Although this is technically a museum, many of the toys on display are for sale, but you will have to pay a steep price for them. There are also a selection of newer toys and things that play off of that retro-element; bow ties from the cult store Leynibúðin with pictures of Batman or Divine, and action figures with a twist (one is called ‘Teenage Mutant Ninja Turdles’...it’s brown...you get the rest) from the online shop Viktor’s Vintage.

As Sunna told me about her day to day work and the history of Freddi, a man came off the street with a puzzled look on his face and mumbled to himself “What is this place?”. After adjusting to the darkness inside his eyes lit up as he squealed “Is that a Ms Pac-Man machine?!?” (It was). 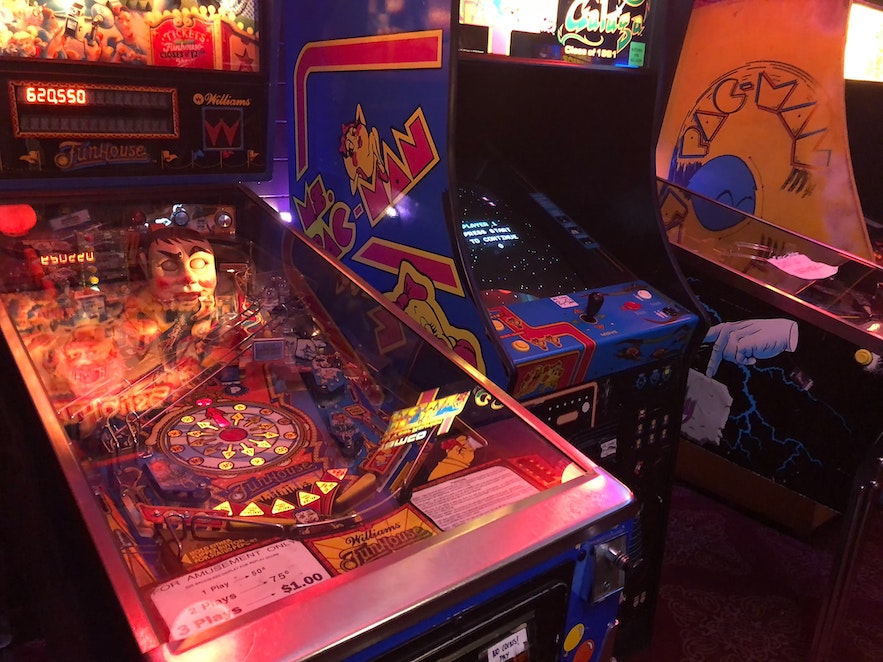 Sunna talked to him for a while about Freddi and everything from Garbage Pail Kids to Magic: The Gathering cards but his eyes never really left Ms Pac-Man. It turned out he had “this exact machine” when he was a kid but, sadly, it perished in a house fire. Although most of us don’t have such tragic stories (I hope), Freddi does bring out a little sadness. It is great to see the toys and games from my past but seeing them reminded me of my lost toys and, subsequently, my lost time, which then spiralled into thoughts about my inevitable mortality. (Things got a bit dark).

You can, however, easily forget this angst (I’m too young to call it a mid-life crisis) with a turn at one of the many arcade games found at Freddi. For just 1000 ISK you can spend an hour playing any machine in the arcade, and if you are strapped for time, pay 500, and you’ll get 20 minutes of playtime.

Aside from Ms Pac-Man, you can find a few pinball machines, Galaga, Donkey Kong and a multi-box with 2019 classic games like Super Mario Bros, Street Fighter, Tetris and Megaman. There is an N64 and a Gamecube, and on special occasions, Freddi will connect consoles like Atari, Dreamcast, Wii and PlayStation 1 and 2. 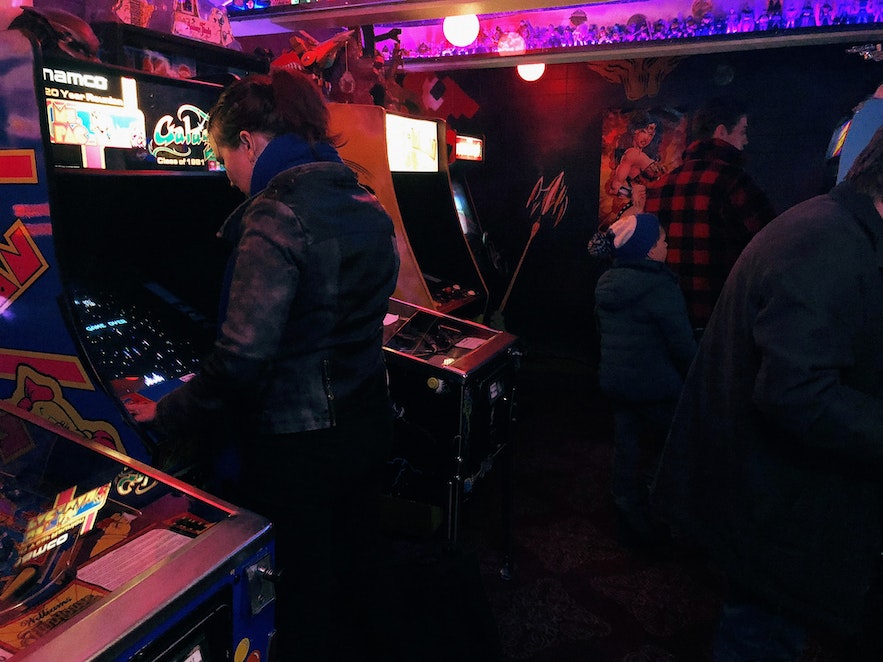 According to Sunna, the youngest machine at Freddi is the Nintendo Wii, and incidentally, it is also the least popular thing there. Most of the things inside the arcade are from the 80s, which is actually when Freddi’s history began.

Before opening at “The Zero”, Freddi spend a couple of years at a location further up the street. Before that, however, it had been dormant for decades.

In the 80s and early 90s, phones had rotary dials, MC Hammer was played unironically on the radio, and Iceland was ruled by the world's first elected woman president, Vigdís Finnbogadóttir. It was also the peak of the arcade era in Iceland.

Freddi was a magical place at the centre of Reykjavík where teenagers would meet up and play the latest arcade games. At the height of its popularity, it had over 40 games (which apparently was a lot at the time).

But as home computers became stable household items and gaming via computers and consoles became the preferred choice for players, the decline of arcades began. Much like video stores today, arcades just became obsolete and so Freddi closed its doors in the mid-90s, with nobody expecting their surprise return almost 30 years later (what this means for video stores, we can only guess).

Today, Freddi might not be as popular as it was back in the day but for those who like to come and let their inner nerd out, this is the perfect place. You can feel like a kid again at Freddi, and now, since you are older, you can bring your own kids and laugh how perplexed they are at something that only has three buttons.

So if you are like me, an adult who is still young at heart, come to an abandoned public toilet where you can relive those days of innocence. (Isn’t Iceland amazing?)