Day two: sublime pool, dramatic Djúpavík and a factory that defies all logic

We woke up to the sound of birdsong in our lovely, compact cottage in Trékyllisvík. Got up and went for a run along the gravel road (the roads are pretty rudimentary around here), after which we drove the short distance to Krossnes for the express purpose of visiting the pool.

That's because the Krossneslaug pool is AWESOME.

It sits right on the shoreline, and when the tide is in and there is a wind the waves crash right over it. I was there once before, back in 1998 or thereabouts, and at that time the road was far worse than it is today and you could drive right down to the shore and park next to the pool. Also, there was no attendant - you just walked right in and paid your admission fee into a kind of piggy bank. Today it's been ever-so-slightly gentrified - there IS an attendant, from mid-June until the end of August, the whole place has been spruced up a bit, and you can no longer park next to the pool.

But it is still awesome.

Actually, "pool" is probably a bit of a misnomer. The Krossneslaug pool is more like a big hot tub - the temperature is around 37°C or thereabouts. Apparently it heated up considerably a few years ago when they drilled a new hole for getting geothermal water into it - before it was more pool-like temperatures, but now ... not so much. So if you go, prepare to just lie there and soak and listen to the waves.

Having left beautiful Trékyllisvík behind, we headed southward, destination Djúpavík. The route was just as picturesque on the way back as on the way out, though with a slightly different perspective. We came upon this pair, for instance, on a lake up on one of the heaths along the way: 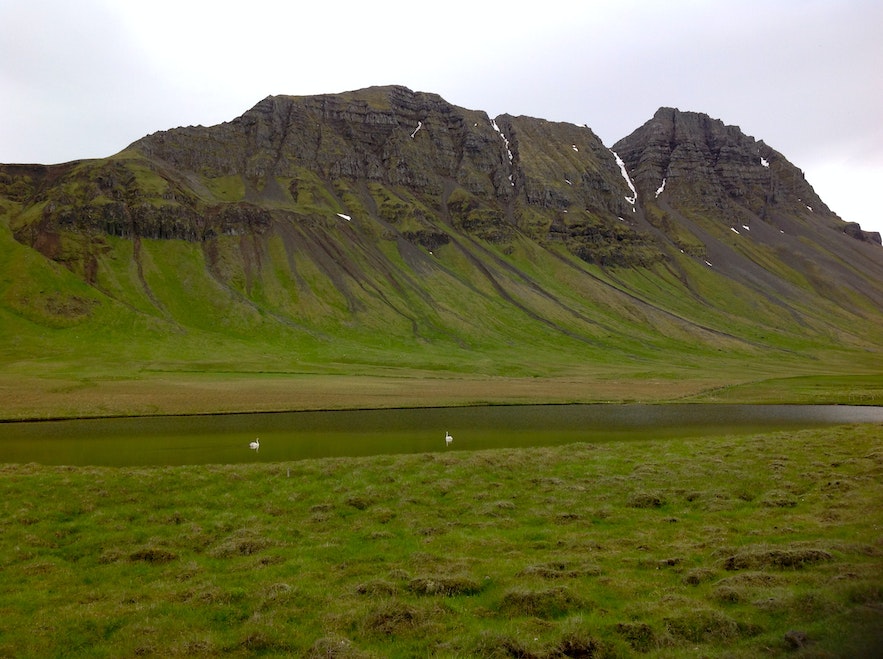 A follower of our Facebook page mentioned in a comment that we should stop at a place called Gjögur, where there is yet another natural pool down by the shore, and where we should also buy some harðfisk (dried fish). The West Fjords, incidentally, are famous for its excellent harðfisk. There was no question we had to comply, though we decided to give the pool a pass, having just spent an hour soaking at Krossnes. However, when we got there we found Gjögur to be a little bit deserted. Maybe everyone was inside watching the World Cup game. 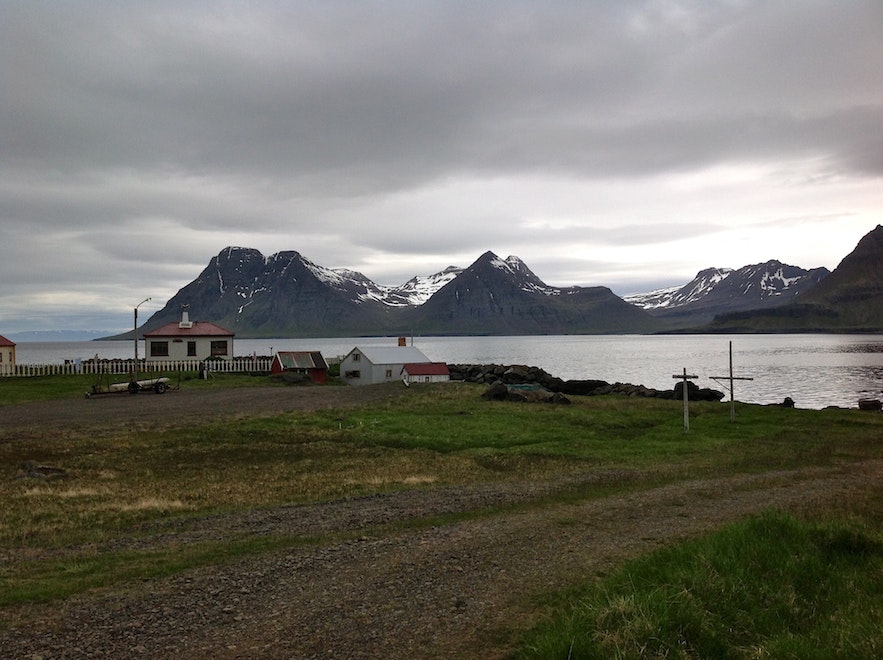 Finally we chanced upon a woman who said that, indeed, they had some harðfisk for sale. She took us into a little garage-type place where they had selection of the stuff - catfish and halibut in various sizes and shapes. When it came time to pay, however, we found that in true Icelandic fashion we only had plastic, and in non-true Icelandic fashion they had nothing with which to charge our plastic. No matter - they said we could just transfer the money later, that they trusted us completely, and that in all the time they had been doing this they had only had to call people to remind them to pay up about five times - and every time it was just because people were still travelling "and hadn't gone home yet so they couldn't do the transfer."

That, too, was so quintessentially Icelandic.

After chatting a while about the merits of driftwood ("See this porch? I built it in 1987. All made out of driftwood. People walk on it, back and forth, day in and day out, and in all these years it's not even worn - it looks completely new" - and it did) we said our goodbyes and headed out towards Djúpavík, another amazing stop in Strandir, from which I am currently writing this.

Where we stayed. Hótel Djúpavík. Super friendly, super relaxed - kind of like being at home where everybody just kicks off their shoes and puts up their feet while the dog flops out on the couch in the lounge. It's in an old house that used to be the staff quarters for the people who worked in the now-abandoned herring factory nearby. The rooms are quaint and simple - no ensuite WC, just a wash basin in your room, but you get the feeling that that's just how it should be in this place. Plus everything is very tidy and completely spotless.

What we ate. Soup of the day (bell pepper soup) and pan-fried cod at the hotel restaurant. Both were unpretentious: down-home, honest food.

Do not miss: The tour of the abandoned herring factory next to the hotel. The place is amazing. It was built in the 1930s and at the time was the most state-of-the art factory in Iceland, the largest building in Iceland, and the largest concrete building in Europe. Its construction defies all logic - how they managed to transport all the building materials and equipment weighing many tons, to say nothing of the sheer manpower needed. TRULY MIND-BLOWING.

If you are going to the Westfjords, you can compare car rental prices here, and use those self-drive itineraries as references: