We just spent the last two days in East Iceland - an area I had never visited before, but had wanted to check out for a very long time. I wasn’t disappointed. Of course two days is not very long to get a feel for a whole region, but here are four sights or places in East Iceland that really made a deep impression on me in the brief time I was there.

Driving north from Höfn to Egilsstaðir, just past Djúpivogur we came to a fork in the road, with one sign pointing to Egilsstaðir, and another sign right near it also pointing to Egilsstaðir, but indicating a considerably longer distance. After a brief consultation with our map (and the help of Google) we determined that the shorter distance would take us over a mountain pass called Öxi. The thought of it made me kinda nervous: it was a high pass (530 metres) and a gravel road all the way, and it seemed rather remote. Like if something happened to us along the way we might just wind up stranded in the middle of nowhere and we’d die either from starvation or hypothermia. Or both.

In the end we decided to go for it, and boy, am I glad we did. The route was stunning. Yes, it was a climb, and yes, it tested the mettle of our car, but the scenery was so, so worth it. There were gorgeous waterfalls all the way - some crashing down with awesome velocity, others like silver threads trickling down the mountain slopes. And the view back over the fjord as we climbed was breathtaking. I only got out of the car once or twice to take pictures, and I’m afraid they really don’t do the scenery proper justice, but here’s an idea: 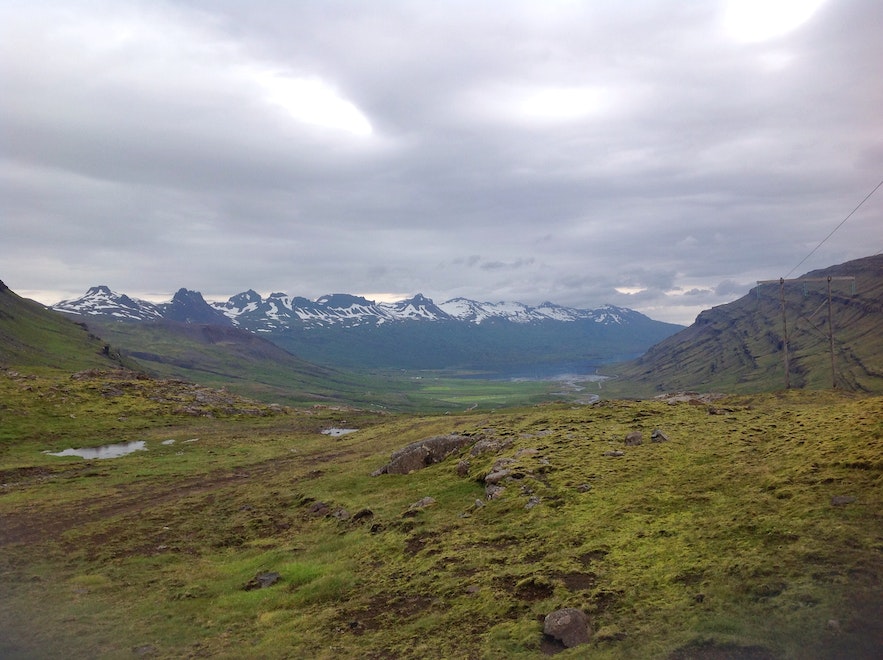 This is hands-down the most beautiful town in Iceland. I’m convinced of it. Bordered on three sides by magnificent mountains that rise high above the town (so high, in fact, that I suspect they don’t see the sun for weeks on end in winter), it also has is a gorgeous river running through it that gathers in a pond in the centre. Add to that a cluster of oh-so quaint buildings and a bohemian-in-the-remote-Arctic kind of vibe, and I guarantee you’ll fall hard for this place. After all, how can you not love a place where the local church looks like this: 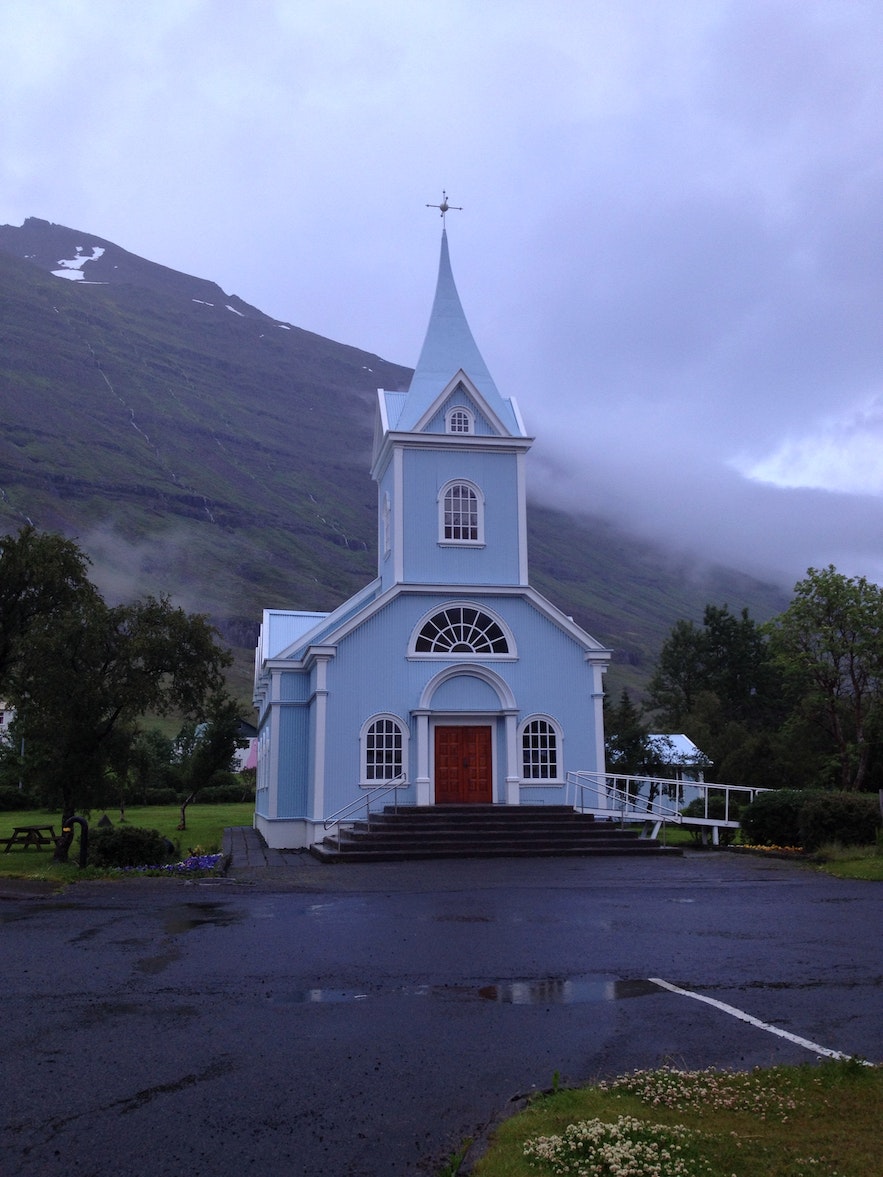 Skriðuklaustur was once the residence of writer Gunnar Gunnarsson (1889-1975), who in his day was a rich and famous author. He lived in Denmark for 22 years and wrote in Danish, but moved back to Iceland after 22 years abroad and built this fantastic residence about a half-hour’s drive south of Egilsstaðir. The building was one of the largest homes in Iceland at the time - if not the largest - and today houses a museum dedicated to Gunnar. There is also an artists’ residency there.

I had always wanted to visit, mostly because I was fascinated by the architecture. Skriðuklaustur is so vastly different to any building you see in Iceland, and driving up to it, through an avenue of trees, you truly feel like you’re in another country. They have a small café on the ground floor that serves light dishes, including a cake buffet in the afternoons. It’s really a special place, especially if you’re a fan of literature, and the people who work there that we met were absolutely lovely. 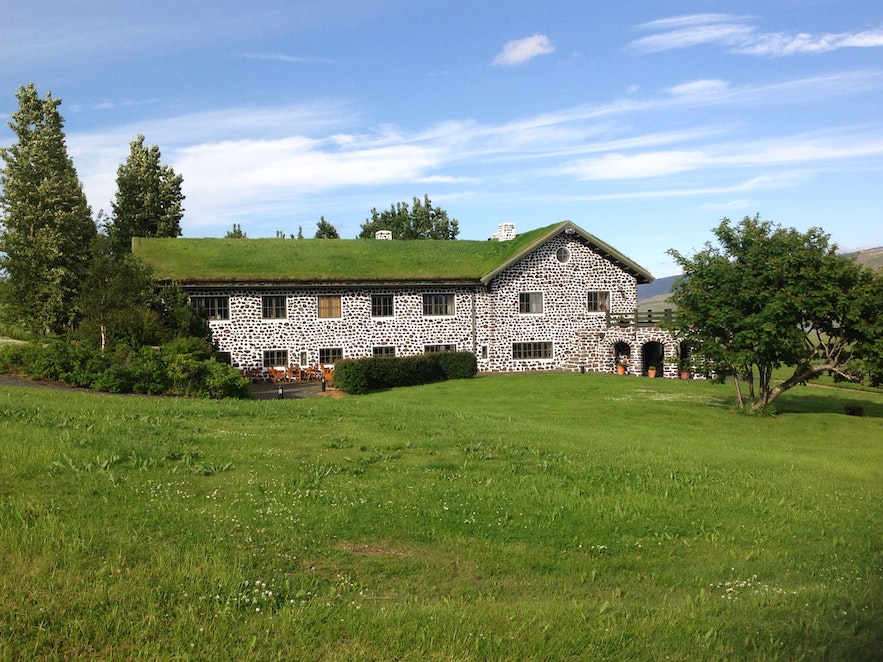 On the road back from Skriðuklaustur to Egilsstaðir you come to a parking lot with a sign that announces the existence of a waterfall called Hengifoss, that is visible in the distance. Aldís and I decided to stop there and hike up to it, something we thought would probably take us about ten minutes. More than 30 minutes later we were only about halfway there, and decided to admit defeat, given that it was late, we were hungry, and very ill-equipped for the sort of hike that this was turning into. That said, the river that forms Hengifoss - which is one of the highest waterfalls in Iceland and is reportedly a stunner - also has other waterfalls, like this one, which we were fortunate enough to see. Doesn’t it look just like a necktie? And behold the basalt columns all around it. Such a great sight. 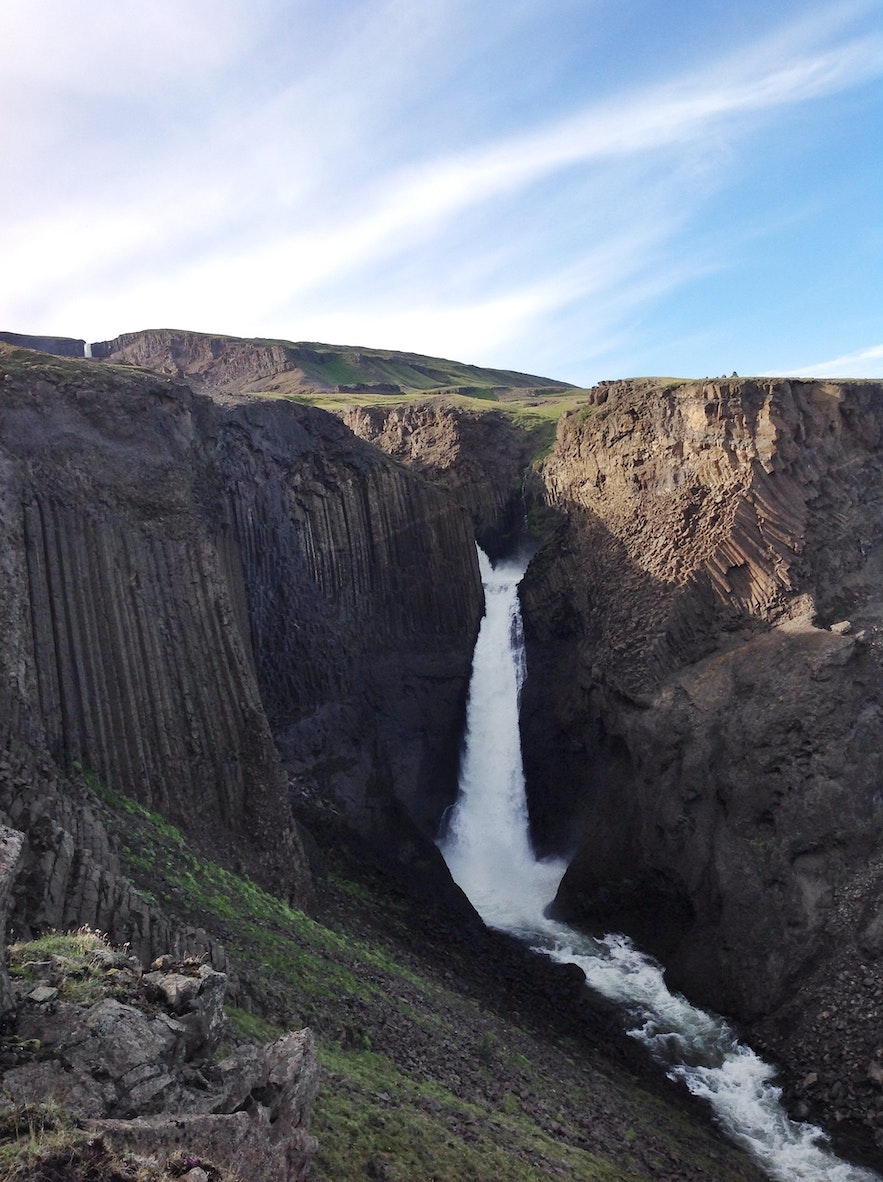 Guesthouse Birta in Egilsstaðir. What a great place. It was absolutely beautiful, clean and modern, with lots of attention to small details like a kettle plus teabags in your room, a small fridge in your room, a breakfast tray in the morning, bath robes in the bathroom, etc. etc. Each room has a small flat-screen TV, a fridge, and a kettle. There's a shared bathroom and shower, hence the aforementioned robes. There is also a nice, bright, fully-equipped kitchen that guests are free to use, that even has a dishwasher so you don’t have to wash your own dishes. We met some great people there and had long and very interesting conversations in that kitchen. Great atmosphere, and the hostess, Hrefna, was incredibly friendly and welcoming.

Main Street Seyðisfjörður, the one with Hótel Aldan at one end and the blue church on the other. It was so adorable, I wanted to fold it up, put it in my pocket and take it home. Either that, or spend the rest of my life there.