What are Iceland campsites really like? I found myself searching for the answer weeks ahead of our trip and drummed up very little information. A few vague Yelp photos and unkempt websites only impeded the process. Even harder was my search to find camping information for the winter season. It was not until we were in Iceland that we discovered how limited our options truly were.

Now, I say that we were searching for winter options, but it's important to note that we were technically travelling during the springtime -- March 31 to April 9. The catch is that the campsites seemingly only have two seasons -- summer and winter -- so, the shoulder seasons (September - October and April - May) get lumped into the winter. In short, most campsites are only open between June and August. And, that's about the extent of information I learned ahead of our 10-day Ring Road trip.

Knowing that it is illegal to camp outside of designated campsites in Iceland, I knew it was imperative to find at least a handful of camping options that we could depend on through the winter months. I put together a shortlist of about 10 campsites (out of 100s that would normally be open during the summer) that I learned would likely be open in April. We planned to stay at 5 of them. I crossed my fingers and hoped that my not-so-reliable sources were, indeed, reliable. We grabbed our Cozy Campervan and set off along Ring Road. 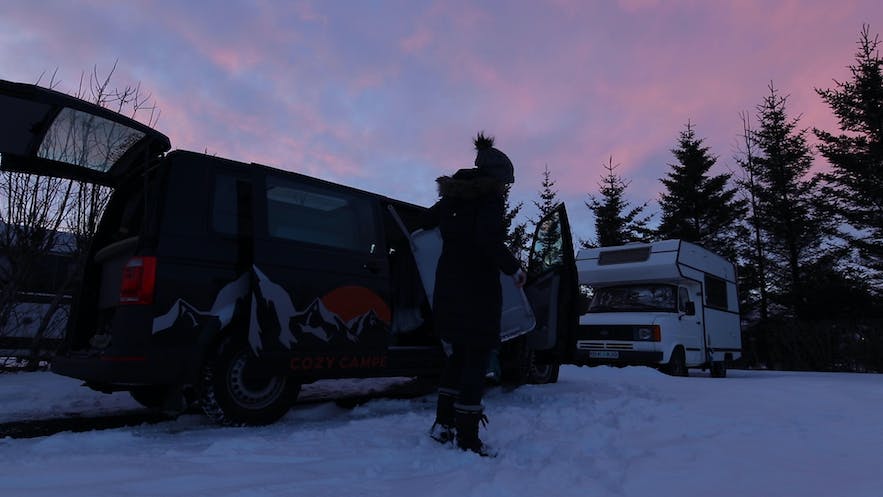 Selfoss campsite was our very first destination heading counter-clockwise along Ring Road. We arrived at the site after an extraordinary day exploring the Golden Circle and were pleasantly surprised with a fully operational facility. We were greeted in the main building by staff and paid for one night. We were allowed to park anywhere on the property, though the few campers that were there all seemed to tuck up next to the building that housed the washrooms. We followed suit. After all, there was snow on the ground that we did not want to be traversing when nature called in the middle of the night.

The campground itself was wide open with no particularly memorable views, but its offerings ended up being some of the best we would experience on our trip. We spent some time in the outdoor jacuzzi (for a small fee) and then visited the nearby community pool, making a stop at Bonus (a local grocery store) on the way back to our campsite. Everything you could need was found in this small town. Selfoss campsite itself had a community kitchen, clean showers and laundry provisions. Though we did not take advantage of it, there was coffee and breakfast offered in the lobby the morning we left. 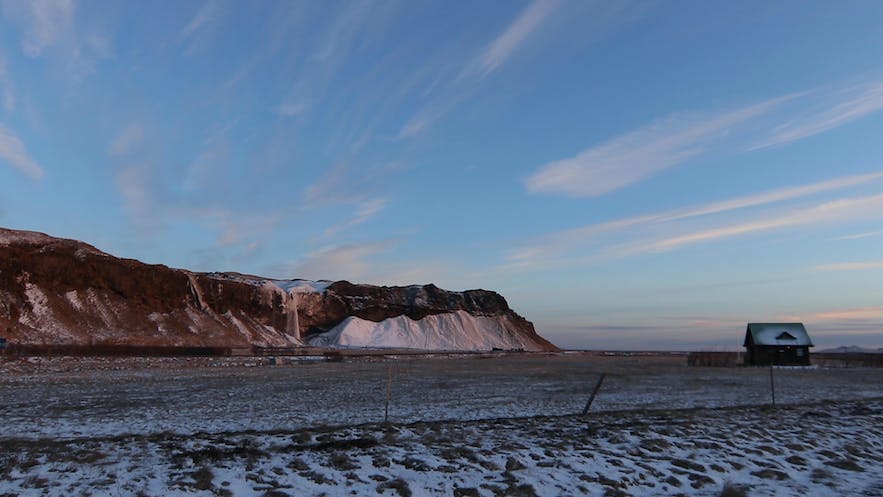 Hamragardar is situated on the same property as the Seljalandsfoss waterfall -- a popular tourist destination for visitors pursuing day trips from Reykjavik. We arrived just as the sun was setting and watched the last of the tour buses pull away. To have such a stunning waterfall to ourselves in our backyard was wonderful -- and it was illuminated overnight!

If you venture off the beaten path a bit, you'll also find Gljufrabui waterfall -- a hidden gem tucked behind cave-like walls. If you've got the right clothing for it, you can wade your way through the water and into the falls. This was easily my favourite waterfall of the trip!

The campsite itself was mostly closed, though a small sign did inform us we could still stay overnight and pay online. It was not staffed, but the community kitchen, laundry facilities and bathrooms remained open for us. The showers, however, were closed for the season. We parked right next to the main building along with three other campervans and were up and out bright and early the next morning. 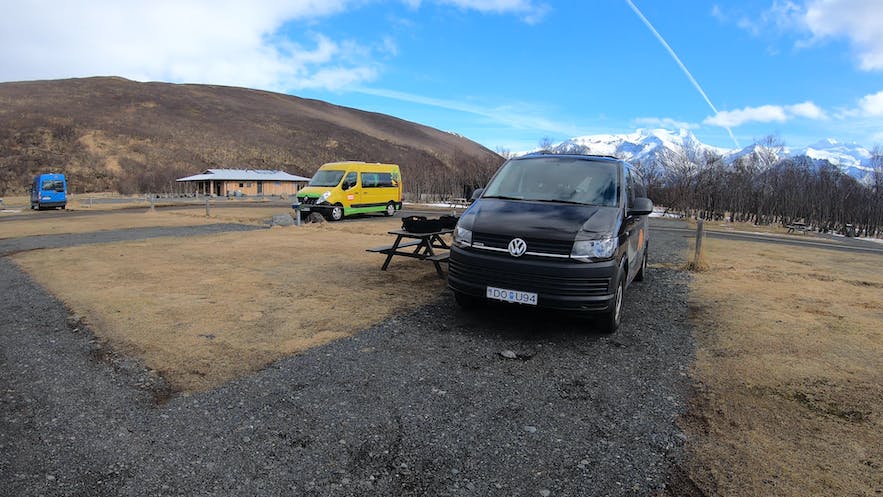 Skaftafell campsite is part of the larger Vatnajökull National Park. This park houses the largest glacier in Europe and it is steps away from the campsite! Skaftafell was perhaps the most organized of the five campgrounds we visited on our trip. After a quick stop at the visitor centre to pay for our stay, we received a small ticket to display in our dashboard and were free to pick any camping space we wanted. Each space was a distinguished area -- many with picnic tables and some with electrical hook up options. There were about 10 other campervans and a few brave tenters already set up when we arrived.

The facilities were spotless and consisted of large outdoor sinks, men's and women's bathrooms and a long display of showers. Everything was meticulously cleaned and included in our overnight fee. At the time of our visit, the men's bathrooms were closed and all guests used the women's bathrooms. I am not sure if that was temporary for our visit or if that is the case for the entire winter season.

Skaftafell campsite is a destination I wish we had more time at. With a national park in our backyard, we could have spent days hiking the area and taking in the remote location. At the very least, we were able to walk up to the glacier (a quick 30-minute stroll) and enjoy some moments there. I can not recommend this campsite enough. 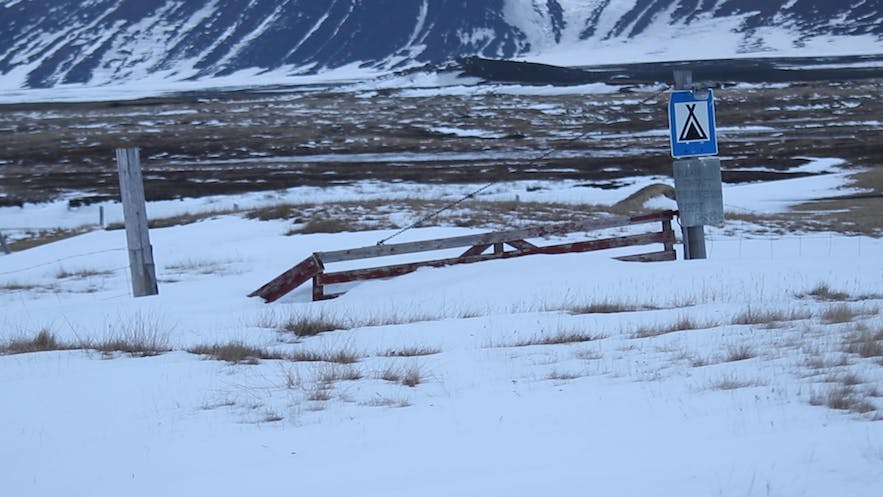 Modrudalur is situated somewhere in the middle of nowhere in east Iceland. In the two hours of driving leading up to this campsite, we traversed scenery that could only be compared to the North Pole. This campsite really popped up out of the blue, but was a great stopping point for us on our way to Myvatn.

It is a bit difficult to describe this experience, as I'm still not entirely sure what was going on. After paying for our campsite stay at the local restaurant, we were instructed to park anywhere we wanted in the campground. The campground, however, was completely snowed in with no other campers in sight. We attempted to pull off onto the snowy terrain, but it was pointless. Additionally, we learned that the only open bathrooms were on the other side of town -- about 1/4 mile away. Eventually, we resolved to asking if we could just park right next to the bathroom building and they said "yes."

The bathroom building was also a bit odd as it seemed that most of the staff from the restaurant was living in that building. It also appeared to have guest rooms for visitors. Despite the confusion, the staff was very friendly and allowed us to use the bathrooms, showers and kitchen facilities. We also enjoyed pastries in the morning before we hit the road.

Modrudalur campsite seemed like it would be a cool spot to visit in the summer, but felt extremely limited over the winter. It was sufficient for a simple one night stay, but I couldn't imagine staying much longer. 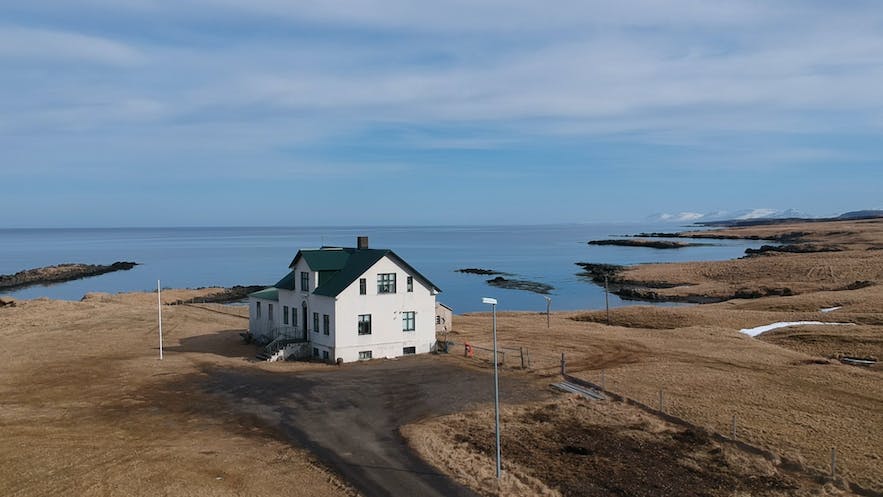 This campsite was even more remote than the last, but it was also one of the most beautiful. Illugastadir is in north Iceland and looks out in the direction of the West fjords. We spent nearly an hour navigating a dirt road to get there and were greeted with nothing but the calm and lapping ocean waters. I walked the entire length of the property in search of an owner or any indication of a place to pay, but came up with nothing. We knocked on the door of a nearby house -- no one. The only sign of life was a barn on the property housing sheep and horses in the distance. It was truly a magical location, but eerily quiet. We were the only campers there and likely the only humans around for several miles.

Adding to the silence and isolation was a sign on the property detailing the history. I quickly found out about the double murder that took place on this site in the 1800s.

As for the facilities, there was a washhouse with several doors, but only one was unlocked. It was a single bathroom. It appeared to be maintained with a replenished supply of toilet paper and an emptied garbage bin. It was sufficient for our one night stay. A small box was posted outside the door to leave some change for the use of the facility.

It is very difficult to find information about winter camping in Iceland. Many of these campsites do not have websites and those that do often have inconsistent information. The 5 campsites we visited were suggested to us by the Happy Camper website. At the time of our visit, I found that their website was one of the only places that had a map of potentially open winter campsites. I noted those destinations down ahead of our trip and we gambled on them while we were there.

While we were not turned away from any of the five campsites we pursued, each experience was vastly different from the next. Some sites were completely open and operational and others were mostly closed. Every site, however, did have bathroom access, which when we really broke down to the bare necessities, this was sufficient for our 1-night stays.

I enjoyed all of our campsite experiences but would love to give a special shoutout to Skaftafell and Illugastadir. The locations of each of these campsites far outweighed what they had to offer facility-wise. The point of camping is to be out in nature and these campsites had the best of the best.