Though Iceland has recently been making headlines for its performance in the 2016 Euro games, summer is in full swing here, with all its usual activities.

For those in the country, that often means repairs and projects on the farm, hiring more hands to help care for the growing foals and lambs born in the spring and planning the harvest for the long winter to come.

In Hafnarfjörður, a small village just 15 minutes away from the capital city, it means the Vikings are coming.

Like a horde of invaders from history itself, Viking reenactors, craftsmen and enthusiasts descend on the Viking Village in early June every year, to spend several days selling their wares, hosting demonstrations of the fighting arts, raising their voices in song, and feasting. 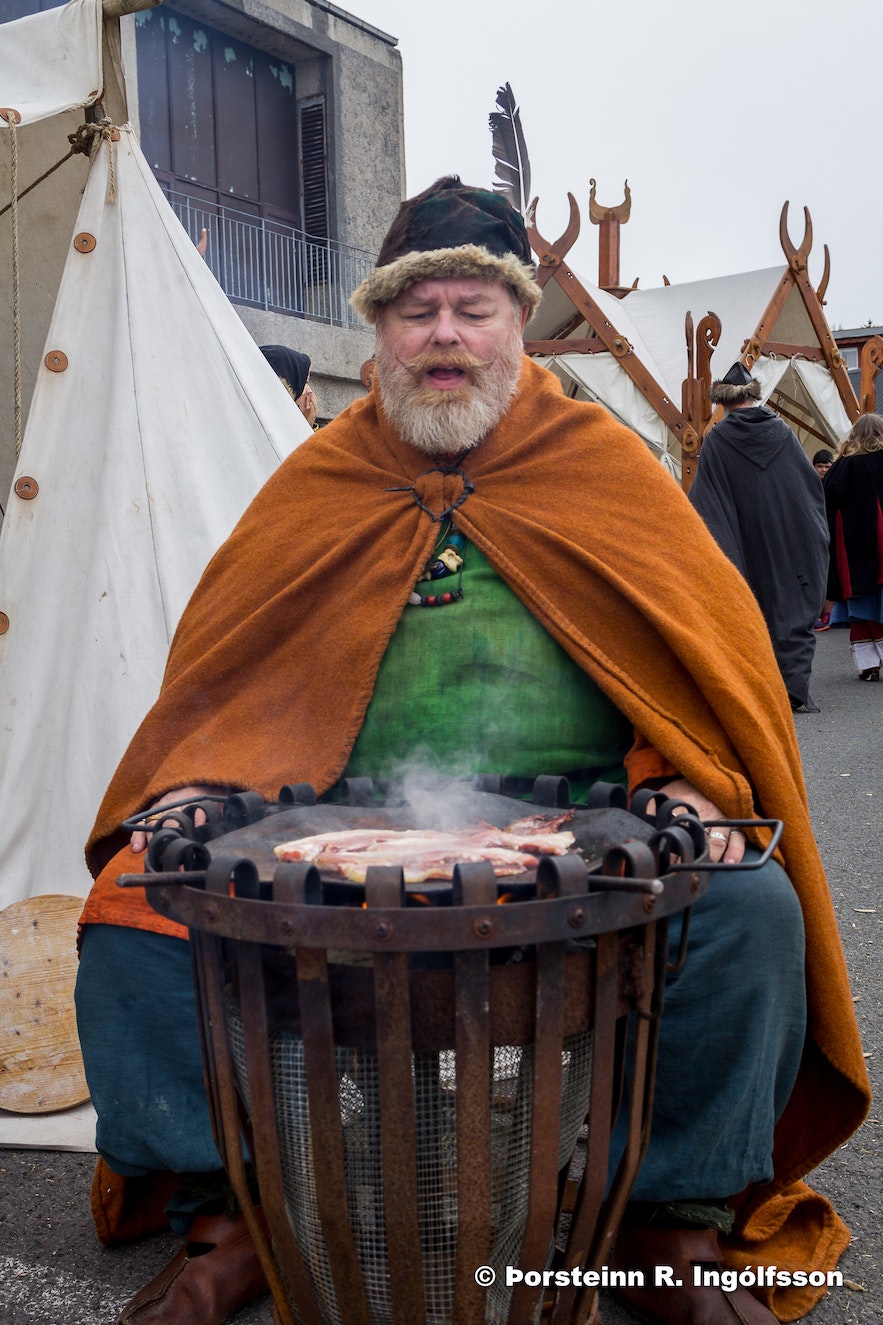 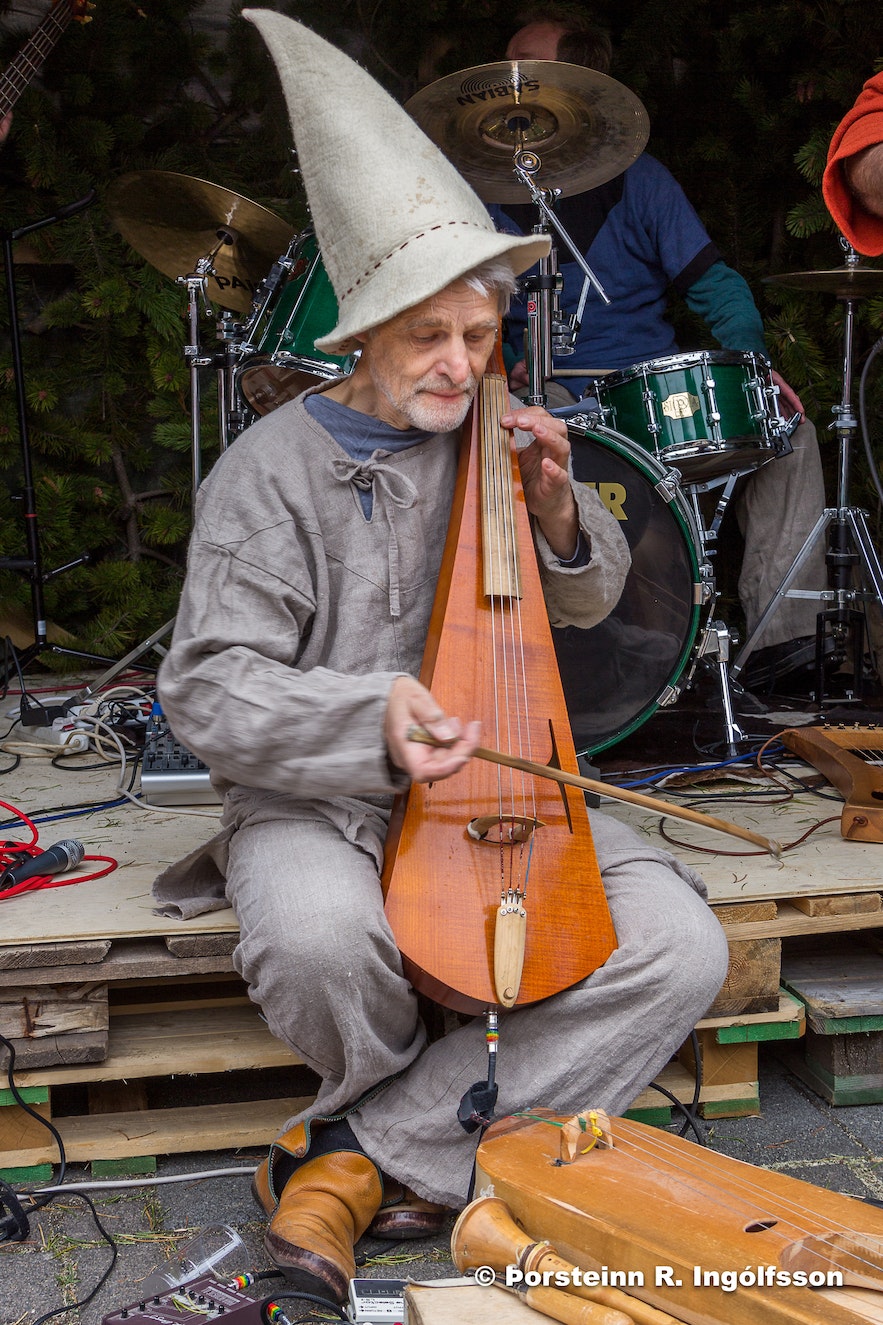 This year was no exception. On June 16-19, 2016, hundreds of Vikings piled into the Viking Village at Fjörukráin, which began with a single restaurant in 1990 by Jóhannes Viðar Bjarnason and has since grown to 2 restaurants, a hotel and 14 Viking cottages meant to capture the feeling and look of a bygone era.

Katelin Anderson, an American who studies medieval Icelandic history at the University of Iceland, turned up on Saturday, June 17. This is Iceland’s National Day, in which the nation celebrates its independence from Denmark in 1944, so it was a perfect time to celebrate the past. She had a good time wandering the booths and watching the fighting demonstrations, saying “It was a fun way to spend an afternoon, and there was a lot of cool stuff for sale in the tents. Also, y'know. Watching people pretend to kill one another, that's always A+ entertainment.”

Many locals enjoy being part of the festival every year, as well. Berta Faber, of Garðabær, enjoys bringing family and friends who have never experienced it before. “We make most years,” she said. “I always go if I have company.  We enjoy it, though it’s frustrating not to be able to see the battles!”

Three times per day throughout the weekend, the children merrily whacking each other with wooden swords and shields were shooed away for a proper fighting demonstration on the a grassy knoll behind the booths. It’s small, but perhaps as the festival grows there will be more space. For now, everyone crams cheerfully in, arranging the children in front so they can see. 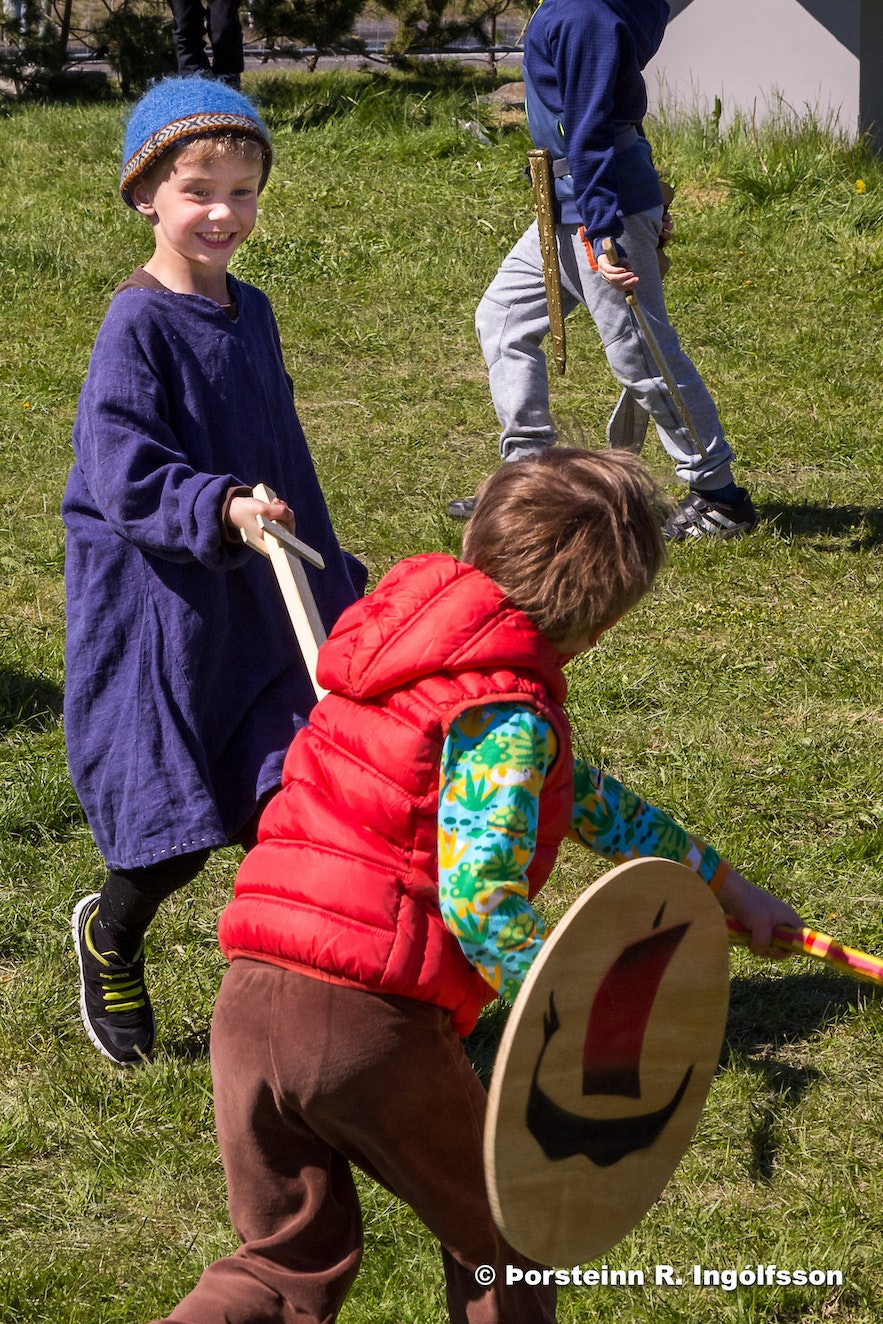 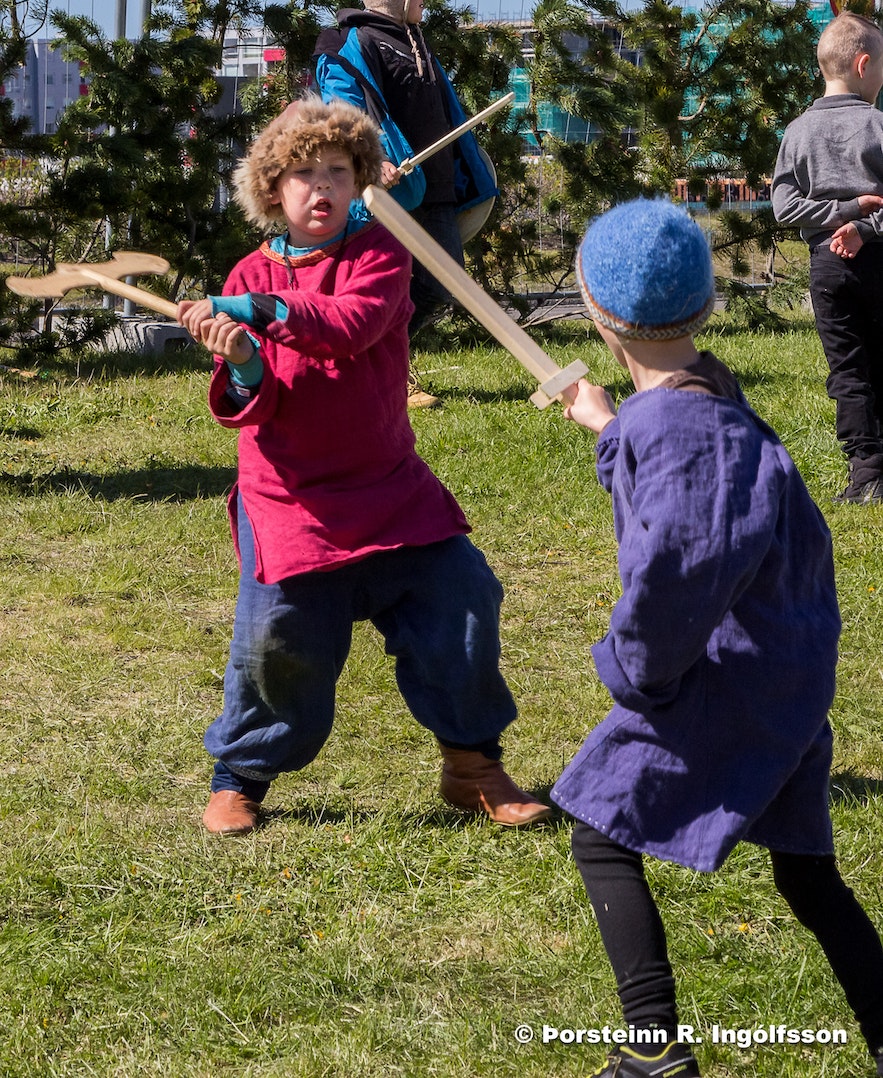 Combat is led by men and women in historical garb who would bang their shields to signal the start of the battle, let out a scream like a gutted buffalo and charge at each other with swords raised high, shields straight and ready. 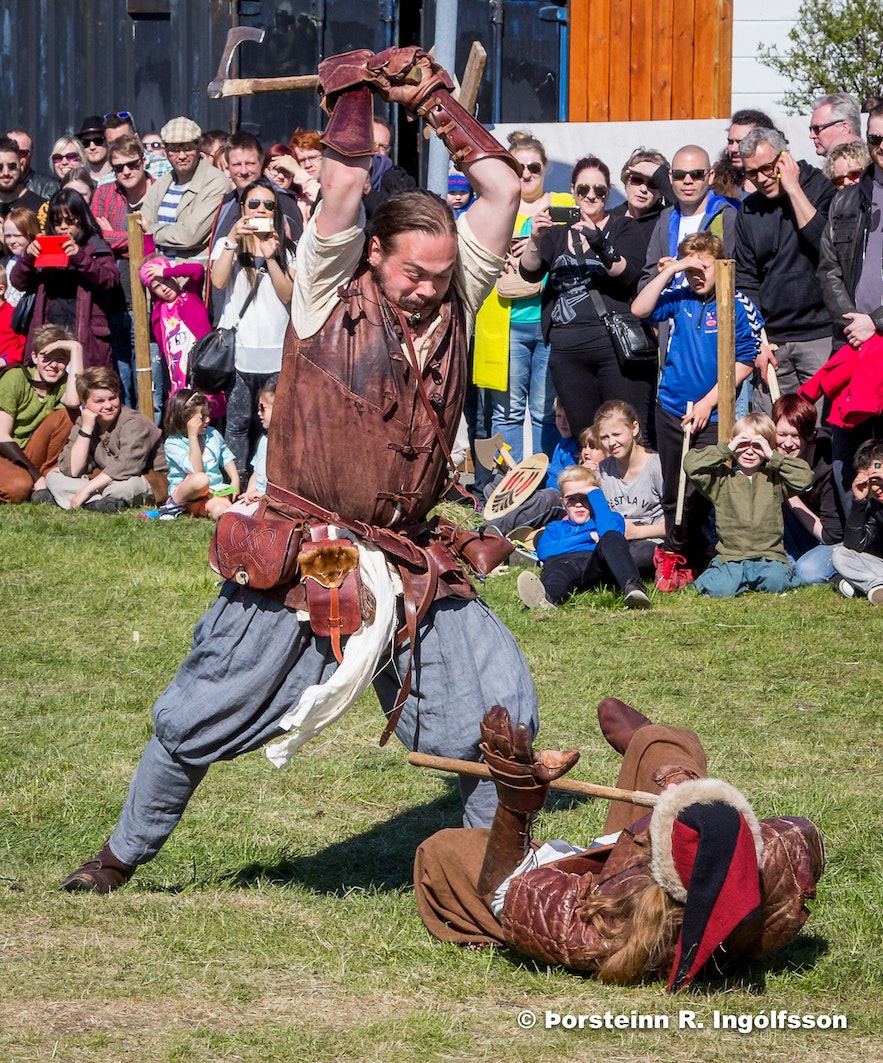 Katelin and I put our semester of Old Norse to good use: “Þetta ér banasár,” she said, nodding sagely to me as two warriors were run through. This is a death wound. “Já, ég veit,” I responded. Yes, I know. Our Old Norse professor would have been thrilled to hear us voluntarily speaking the language of the sagas after a year of classes.

Unlike the warriors in battles of old, though, these men and women were soon on their feet again, laughing and smiling before the cheering crowd, making their way back to their booths or off to get a drink before returning to their duties. Every Viking knows how important it is to stay hydrated! 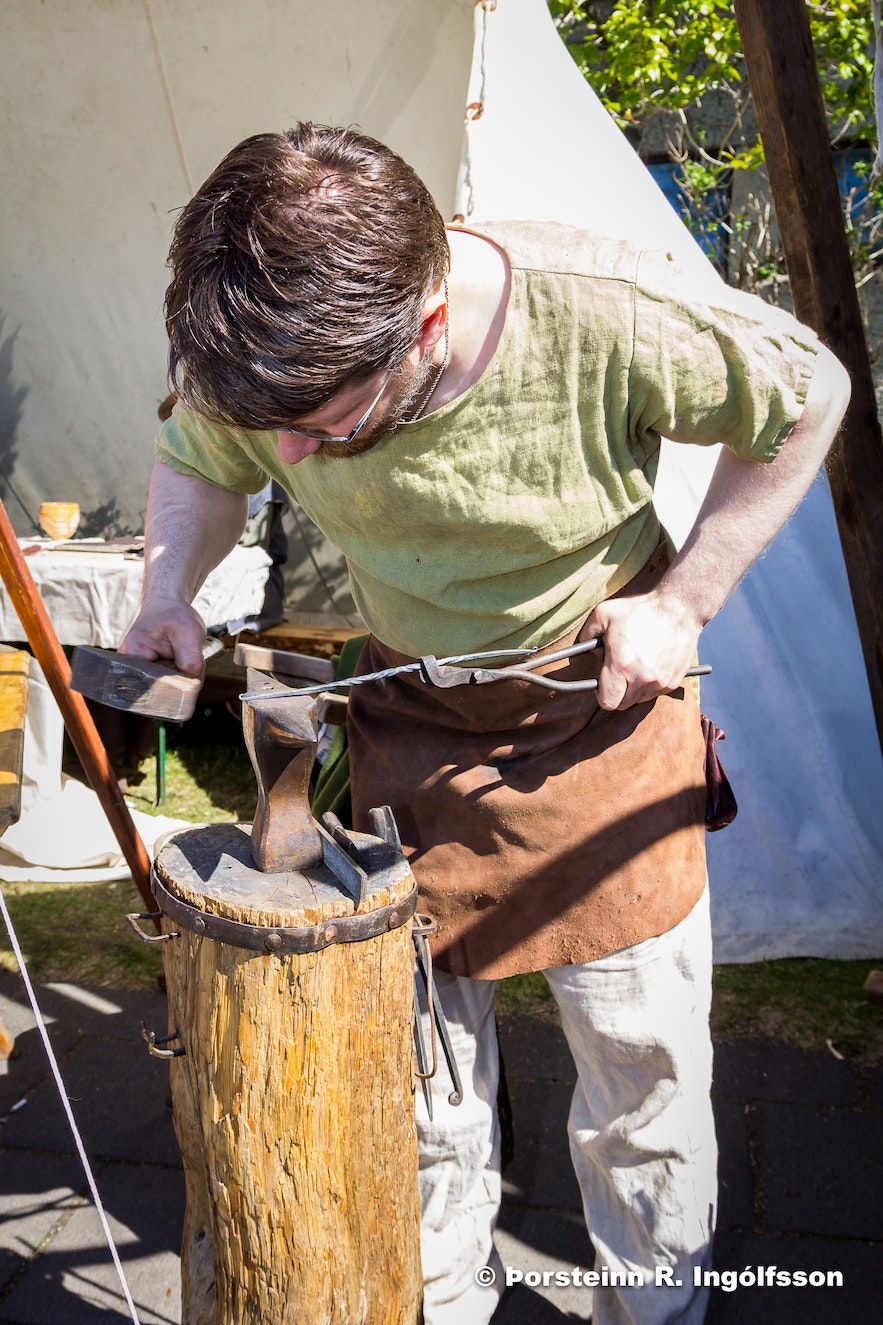 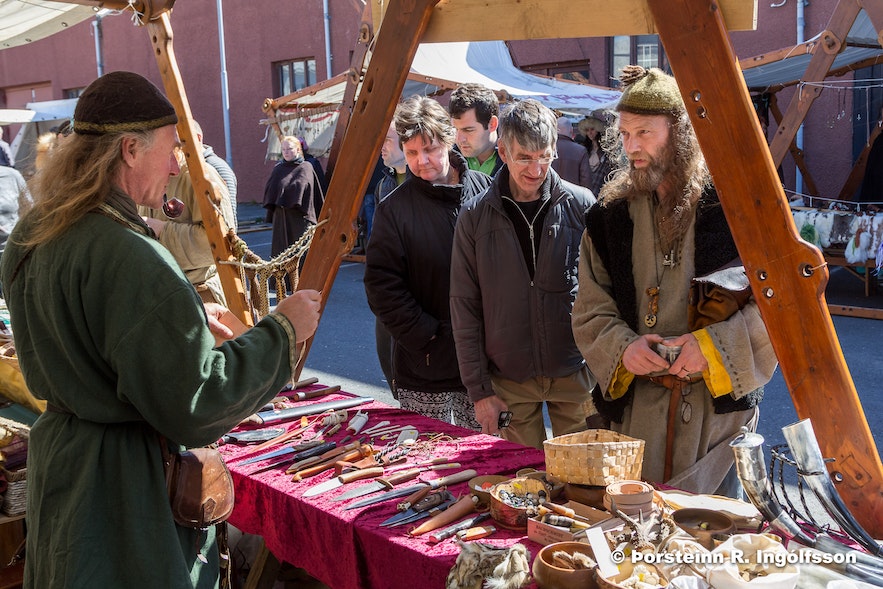 Beyond the fighting and the booths filled with crafts from silver jewelry to woolen hats and scarves, leather bags to bone cloak pins and hair clips, knives and swords of all sizes, people could enjoy freshly brewed mead or an assortment of barbeque at the food tent.

Beyond the fighting demonstrations, food and crafts for sale, music of different sorts played throughout the day. On Saturday, the startling twang of a real Faroese cowboy filled the air as he sang country western songs. Viking folk music, storytelling and a demonstration from the world’s strongest disabled man could also be seen, in between full concerts, archery and axe throwing. Customers and reenactors come together for a Viking feast at Fjörukráin restaurant to mark the end of each day.

Reynhildur Karlsdóttir, who has been a member of Rimmugýgur reenactment group and other groups for 10 years, says that camaraderie is important. “It’s a way to do something fun and different, and catch up with friends I haven’t seen in a year or so.”

Many of the participants come from all over the world and participate in similar faires and festivals throughout the year.

“Everyone enjoys being there,” says Theodór Árni Söebech Hansson, a member of the Rimmugýgur group for almost 10 years.“The atmosphere is great, everyone is welcoming and there is a general feeling of warmth and happiness.”

As a member of Rimmugýgur reenactment group, one of several such groups at the festival, Théo also enjoys getting his hands dirty. “The Viking Festival is active, not passive. You can get things custom made, your name hammered into silver rings or necklaces on the spot, and most Vikings are glad to talk to people. You can try things yourself!”

As for me, I wandered through the booths twice, debating various purchases (otherwise I would have gone home with one of everything and no money at all). I ended up admiring several pieces before choosing a silver-and-gold ring that seemed to capture the sturdiness and power of Icelandic handicrafts with the romance of the Celts in its twisting silver design.