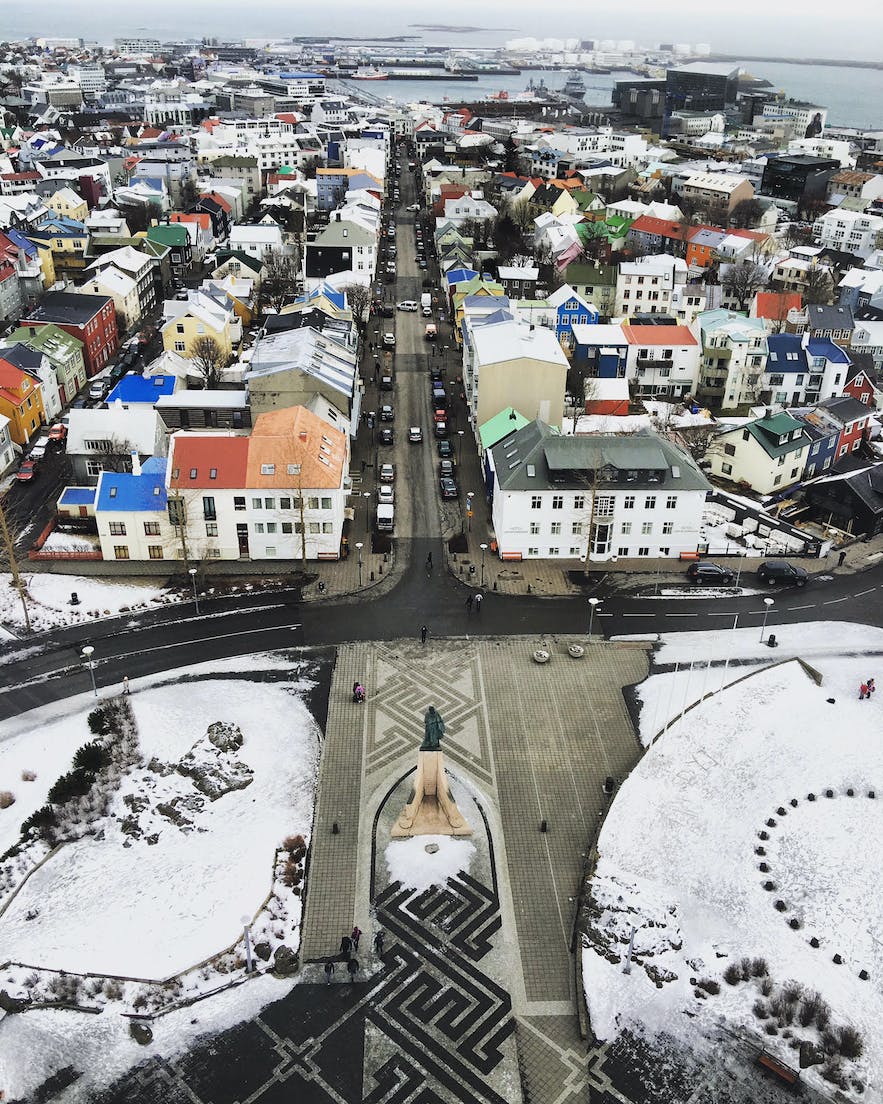 Prior to heading on my adventure to Iceland, I was a little concerned about what I would eat.  Per Google, Icelanders primarily eat bread with a side of Minke whale, and pay in Viking’s gold for it.  Kind of kidding…  I essentially got the impression that Iceland didn’t have many options, and that I might as well bring Clif Bars, along with a loaf of bread in order to sustain my body for the two weeks of traveling.  Well, I did bring a box of nutrition bars (always a good idea) that I thoroughly enjoyed with myself and others, and as far as that loaf of Rudi’s bread in concerned (intended to make sandwiches).. It was sadly stomped on and eventually flattened by my flight neighbor’s feet during his hourly bathroom visits (middle seats are the bane of my existence). However, to my surprise and benefit, Iceland more than compensated for this nutritional tragedy.

Ok, so the truth is that Iceland is a country that is pretty far away from mainland Europe.  And although very cold, virtually tree-less, and expensive, they have a lot to offer as far as food is concerned, especially in fruits and veggies.  How is such a cold/tree-less country able to be the largest exporter of bananas to Europe? They’ve got geothermal science down! Let that volcano heat warm up your house, green or otherwise. With of population of 328,000 citizens, they also have the most Nobel Laureates per capita, and are the happiest country (here's a list of their many per capita accomplishments).  While there, everyone I met spoke a fair amount of English.  This is helpful when trying to convey you have an allergy, and because it would take years to properly pronounce anything in Icelandic. 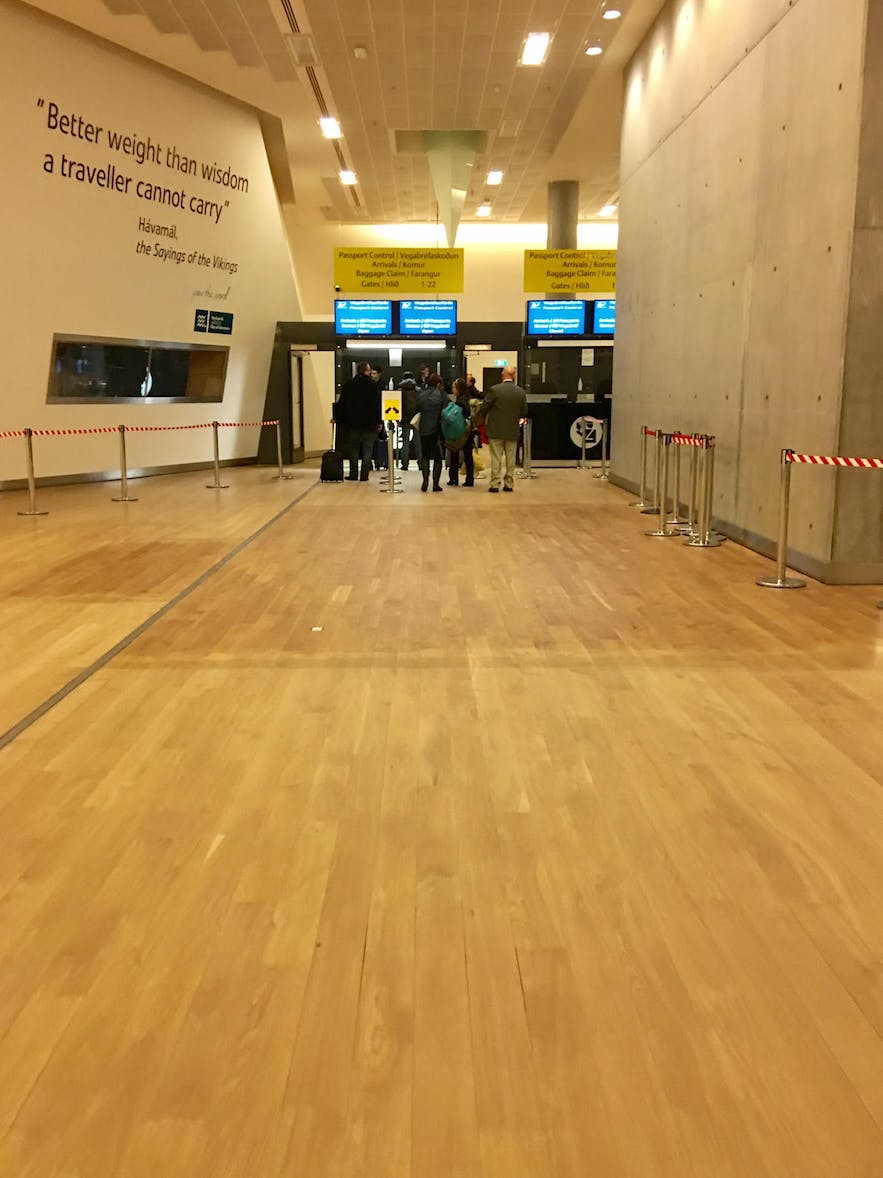 As soon as I touched down in the Land of Ice, I was surprised to find a Joe & the Juice, a delicious juice shop in the KEF airport, then got on the Flybus to the city. Between my excitement and delirium from not bring able to sleep on the long flight (remember my neighbor?), I felt like I had landed on a different planet as we drove westward.   Upon arrival in R-town (Reykjavik), I dropped off my backpack at Kex Hostel and went straight to the Hallgrimskirkja, to take in my quintessential view of downtown Reykjavik and get that ideal Instagram picture.  I did this, grabbed a quick latte complimented by a cliff bar while waiting for the iheartreykjavik walking tour to begin. I always recommend walking tours upon arrival to any city to better understand what you’re working with. It’s kind of a good taste tester. I met Audur, our tour guide, and the creator of the heart reykjavik blog (felt I was meeting a celebrity) and got to know the small-big city.  Did I mention that she is related to Bjork? Well technically, everyone in Iceland is related to each other. Like it's actually a problem. Luckily for the dating scene, there is now a dating app that helps evade any risk of kissing cousins.

After the walking tour, I interrogated Audur, which she handled with much elegance and patience.  I explained to her that I wanted to tryout Icelandic cuisine, without causing myself an allergic reaction, and not burning an even larger hole in my wallet (did I mention Iceland is expensive?).  She first explained that Icelanders like their bread and meat, but at the same time, they are slowly changing in order to accommodate those with dietary restrictions. With her recommendations, and my own trails an error, I was able to do a mixture of cooking at my hostel’s kitchen, and later AirBnB’s kitchen, creating food to eat at home and on the go.  I also visited some of the fine restaurants in, and around town.  Here’s how I did it, sans allergic reactions, and san’s putting myself in further debt:

Eating at home/to-go: I was devastated to see my Rudi's loaf of bread transform into a footprint plaque.  But Audur quickly quelled both my tears and fears, and told me about Bonus (the least expensive market in town… relatively speaking), and the close-by organic market, called Heilsuhusid, that would not just offer me local gluten-free loafs of bread, but anything else I could think of.  I purchased my veggies, nuts, meat, juice, chocolate, then more chocolate, etc. at Bonus, without it costing me a whale’s tail.  While Heilsuhusid offered local organic food, and had an ENTIRE wall of gluten free options.. Even a juice bar!  Think of them as small and cuter version of Whole Foods. Cooking at home allotted me that opportunity to both save money for more Icelandic adventures, and make to-go meals for day trips, without having to worry about food restrictions. 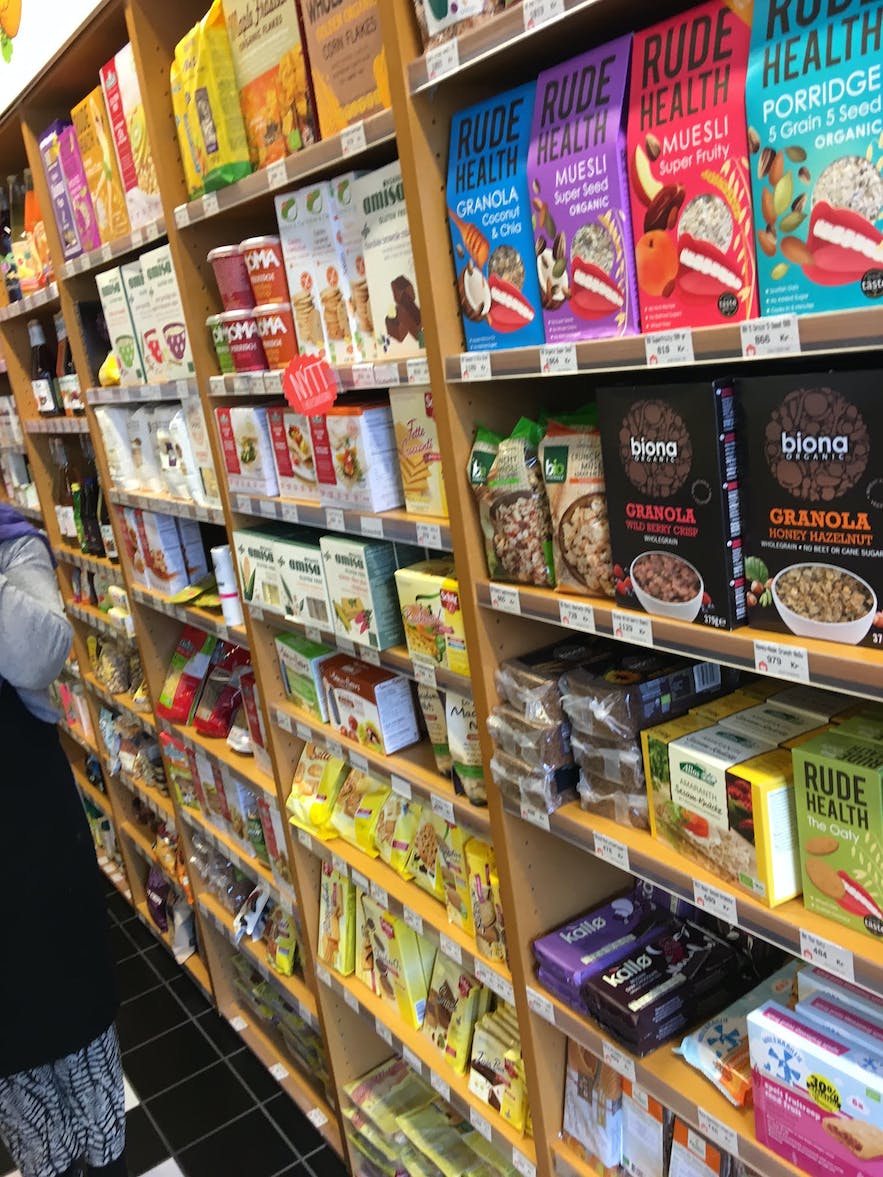 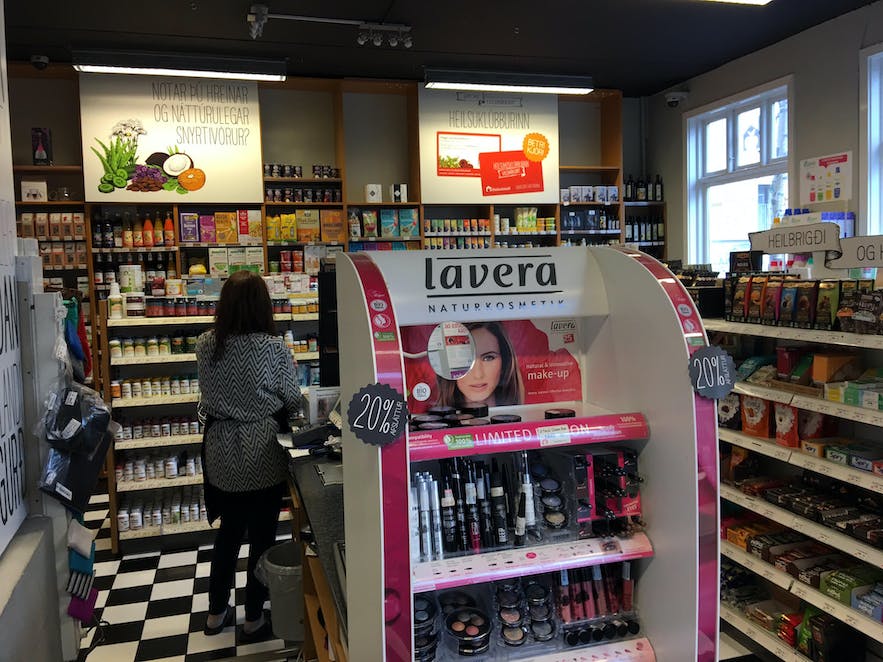 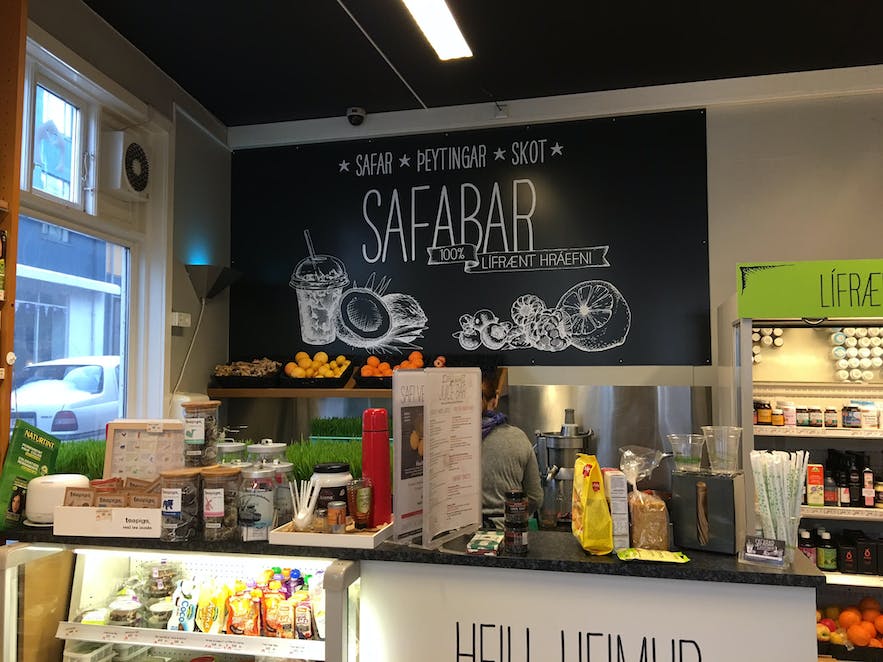 For those who don’t have a kitchen to cook in while in Reykjavik, or just don’t want to deal with cooking, or wanted to try out Iceland’s cuisine. Here is what I munched on whilst in Reykjavik (remember everything is in walking distance in downtown)…. 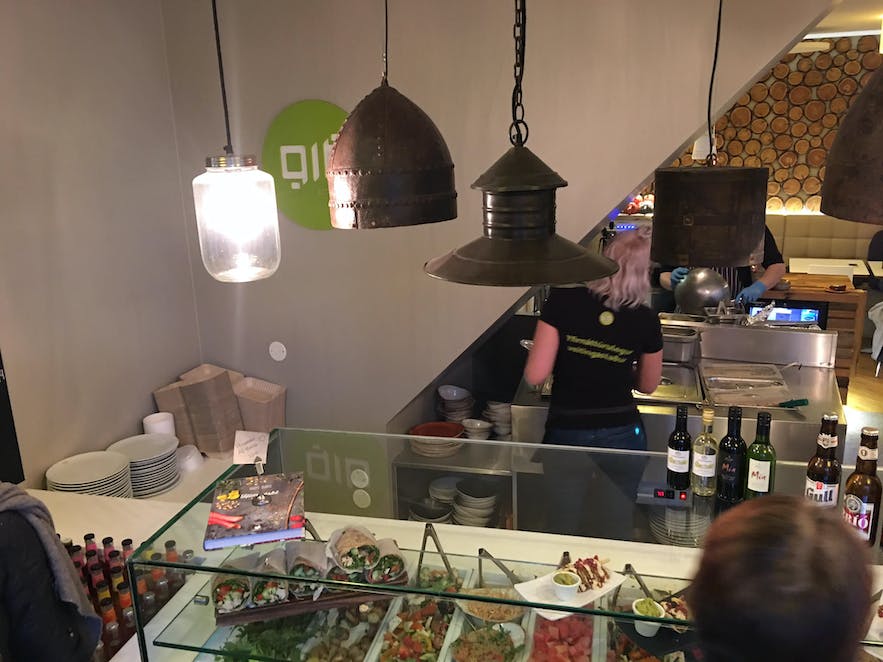 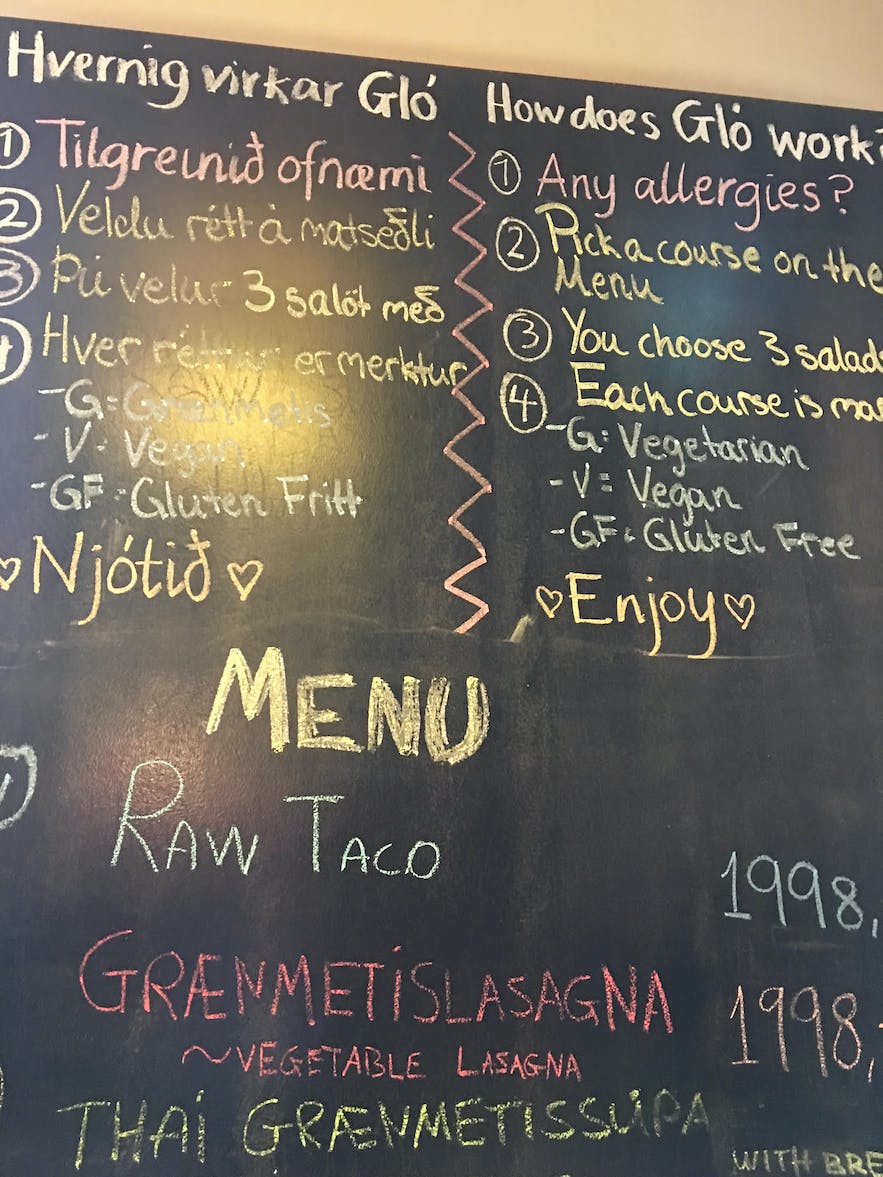 Glo was Ardur’s first recommendation, when I mentioned I was GF/dairy free.  Side note, Iceland Air offers their meals on board, as well as the Sigur Ros Documentary, Heima.  Have I sold you on Iceland Air yet? Glo offers both organic gluten free and vegan options, and their food is delicious. The interior reminded me of of Ikea (which is technically the most popular restaurant in Iceland), and I made my way over there more than a few times before leaving… Not including my in-air meals.

Best bang for your buck when it comes to fresh fish, and mouth-watering fish soup.  GF and Dairy Free friendly.  I visited a total of three times while in town, and ate the fish soup everyday, in addition to picking off everyone else's food. 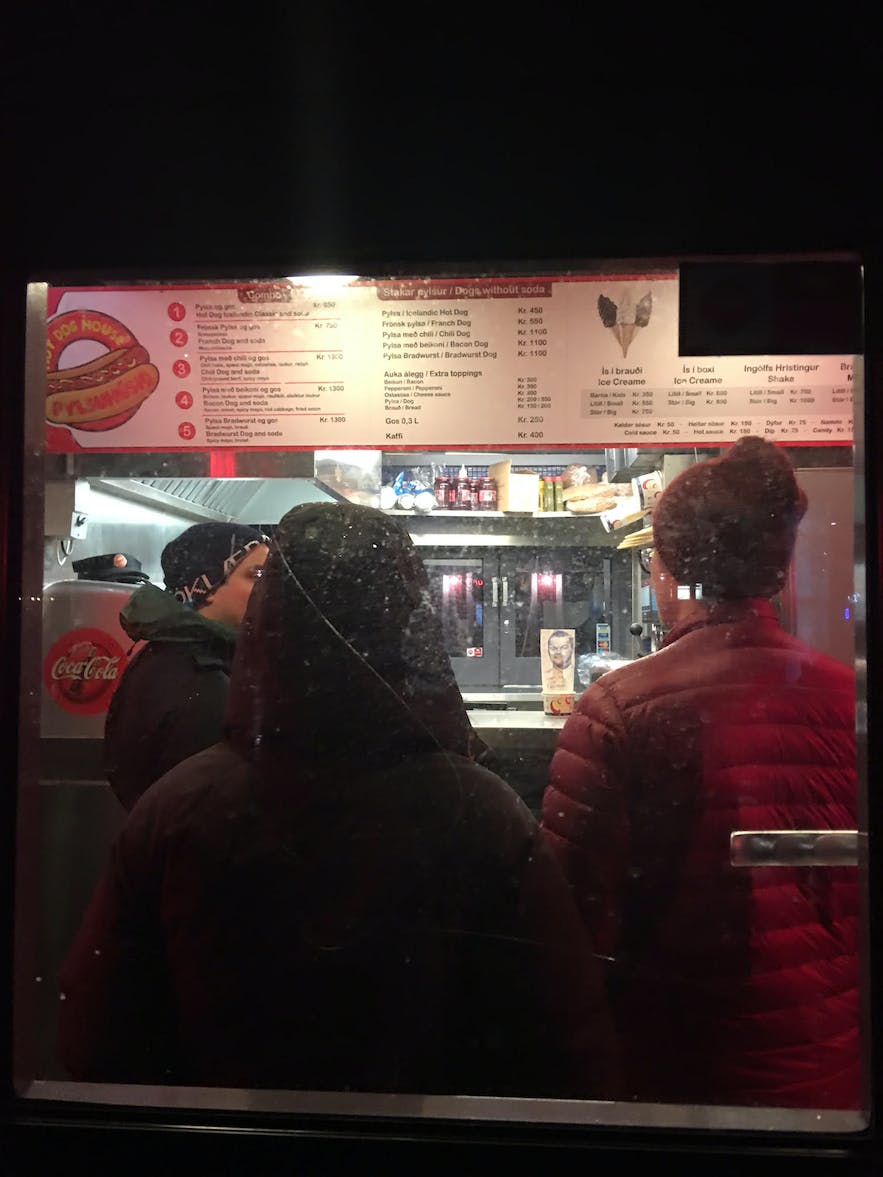 Is it the fact that their mustard is stranger than their topography, or that the hot dogs are made from lamb, rather than beef or pork? I give everything a try once… I took a good bite minus the bun, and was meh about it.  But my travel companions went in for a second, then a third. 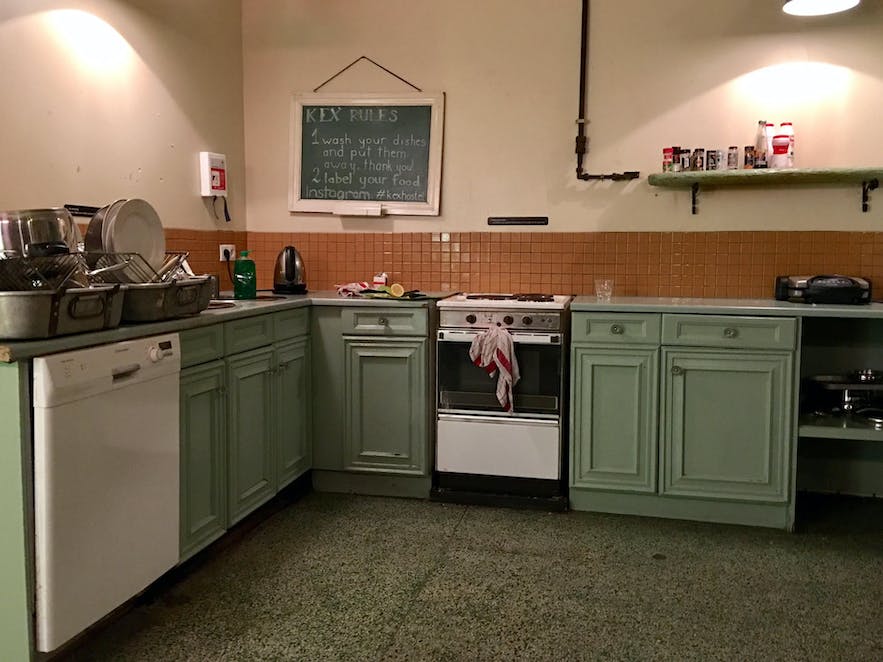 I spent the first half of my trip traveling solo and stayed at Kex Hostel (watch my YouTube vid about it).  They have a pretty large kitchen, with a ‘donation/free’ section. I did a lot of my cooking here with my dorm mates, and at one point someone accused me of stealing his eggs… But it worked out, all in all. I wouldn’t say Kex Hostel's restaurant would be my first choice for a GF/Dairy free meal, but they did have bacon wrapped dates that I wanted to drape myself in.  They also had olives, roasted tapas, and other small options. 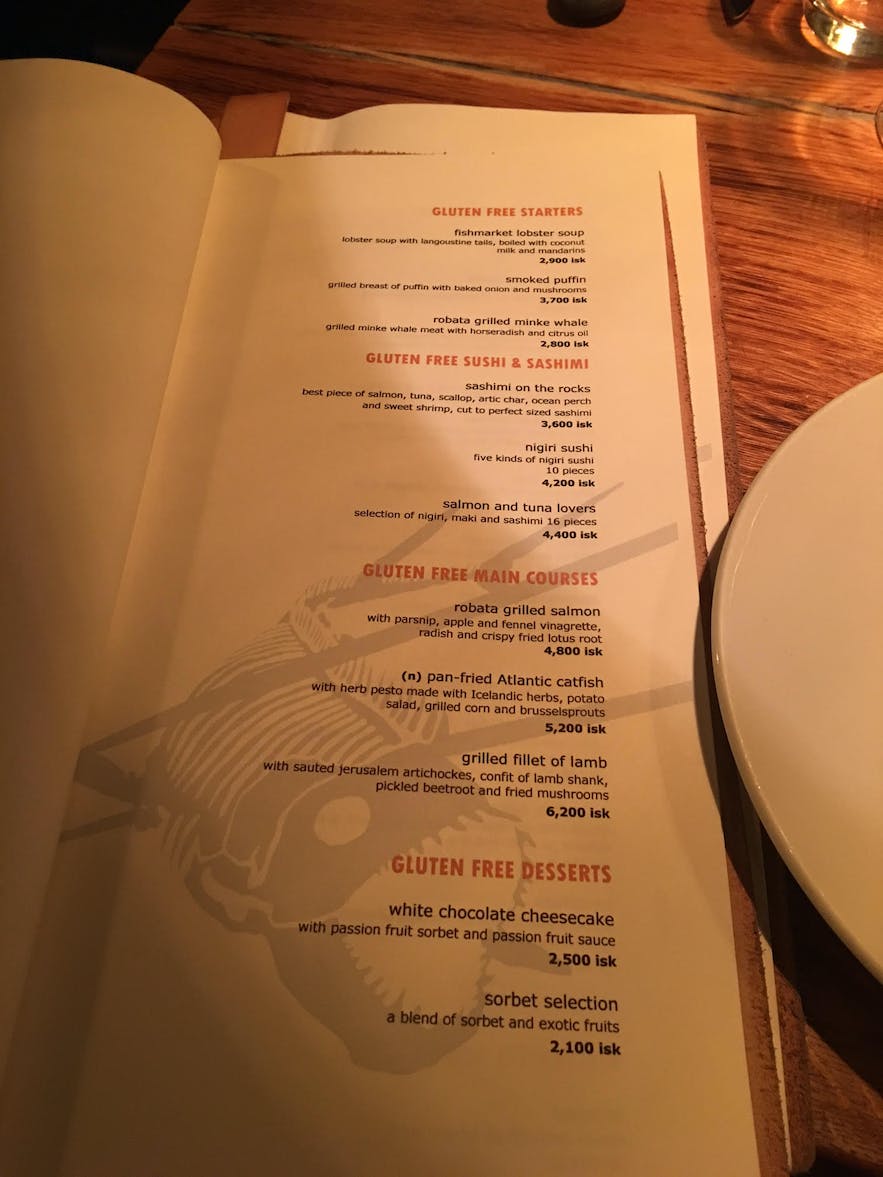 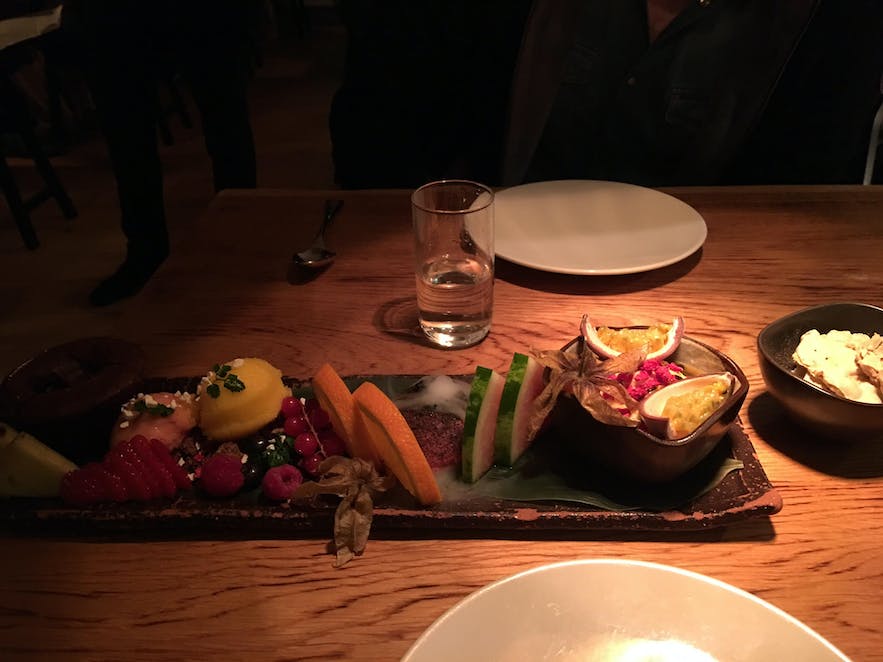 HOLY MOLY… By far the best meal(s) we had while in Reykjavik were both eaten here. Is it expensive? Quite.  Is it worth all of the Krona? YESSS. They not only have a GF menu, but also have this ‘tasting experience’ option you can indulge in with a fellow famished human, or multiple persons to try a little bit of their 'best ofs.' If you miss out on eating here whilst in Iceland, then we don’t need to talk again. But seriously. Biggest recommendation would be to make a reservation... They fill up days in advance, and you’ll soon find out why. 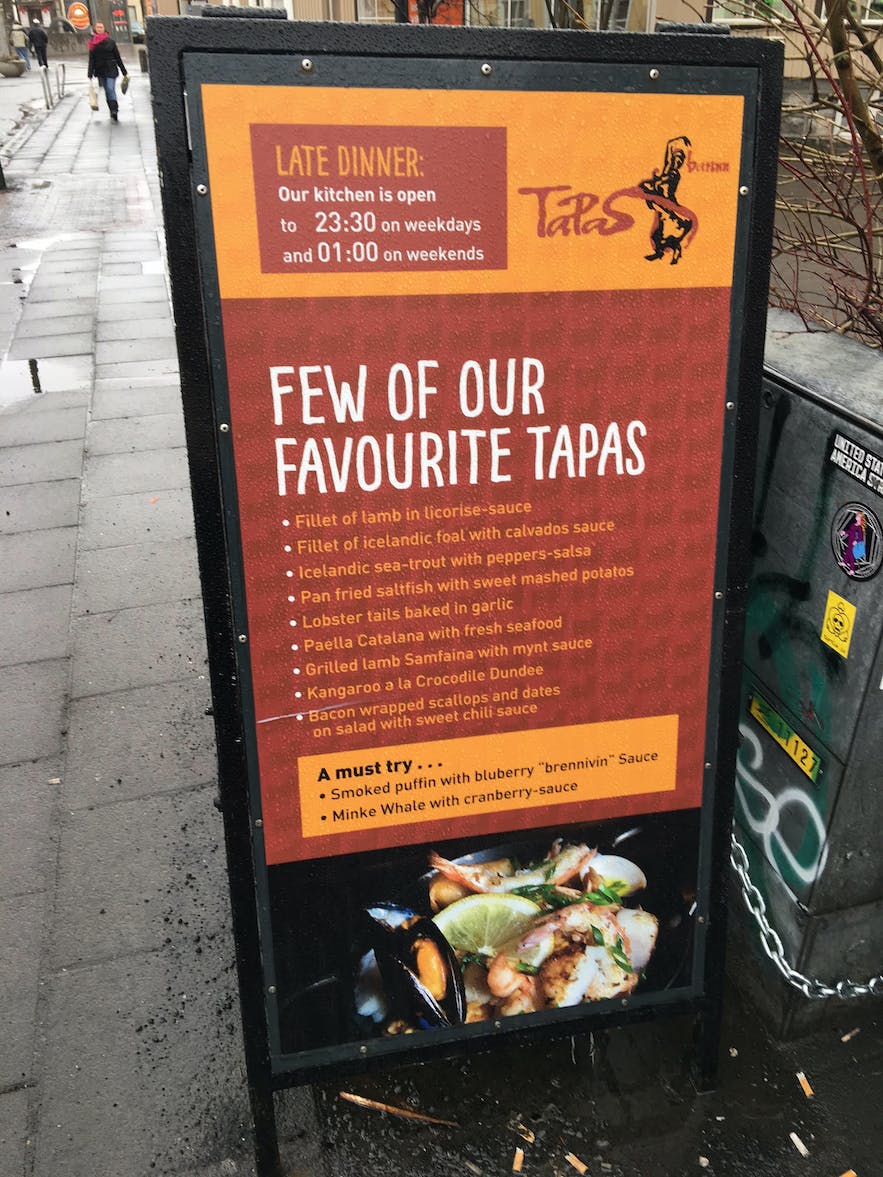 Did we also dine here twice? Did I maybe eat Minke Whale and Icelandic Foal (horse) here? Nnnaaybe. I assumed the horse was just the most amazing filet mignon that ever did touched based with my taste buds, until the waitress told me otherwise.  Oh well.. we will just silently check both those mammals off the list.  What does Minke whale taste like? Like a piece of blubber, extremely high in iron would taste like.  I know I sold you on that one.  Yet, my friends loved it.  Ok, back to Tapas Barrin.. Great atmosphere, and lovely staff.  They have a tapas tasting menu that you can share with multiple people.  I can confidently say that they actually make Spanish food taste interesting (swear that wasn’t a jab).  Their menu is set at a reasonable price, and again definitely worth it.  Staff was able to accommodate my allergies, which was cool. We were full to the brim after rolling out of there both times. Last but not least, make a reservation, or be prepared to wait for a spot at the bar! 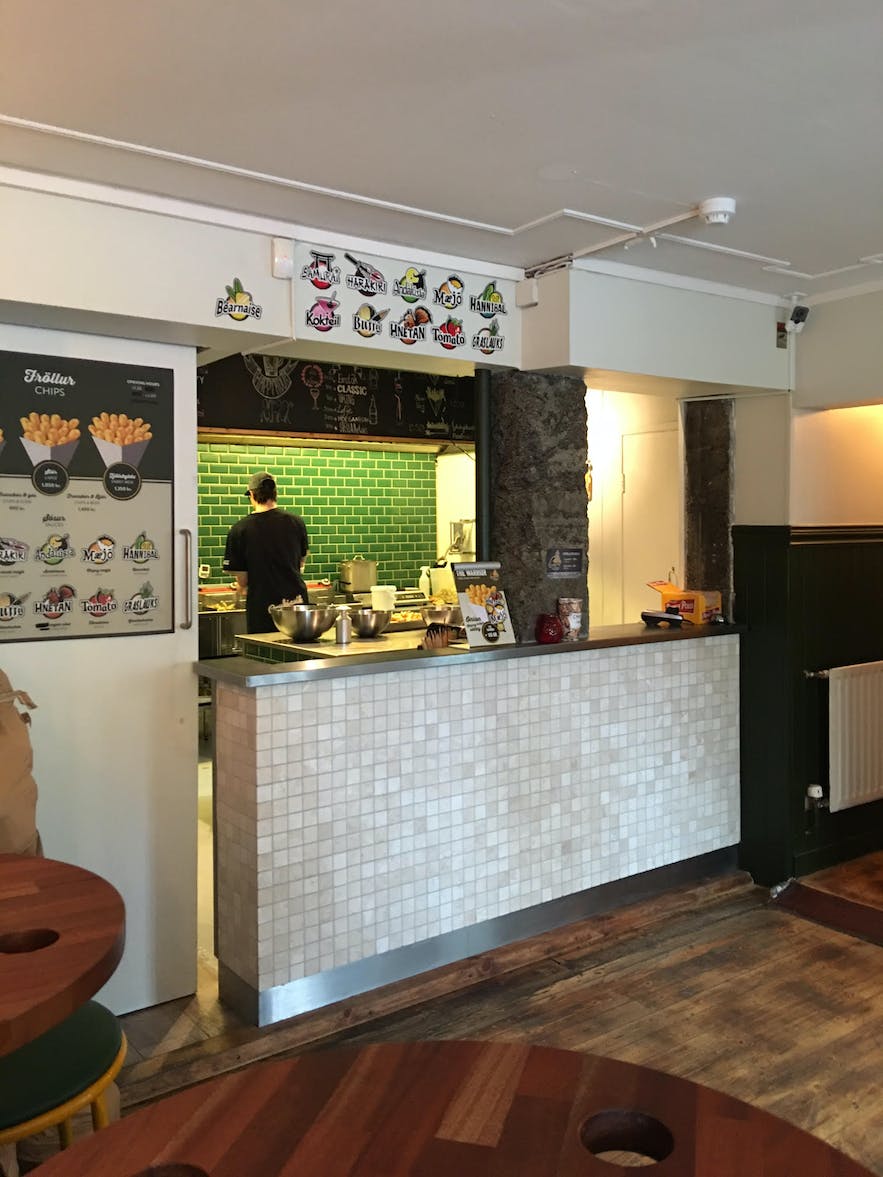 They get fries right, and all of the sauces to accompany them.  GF and they have dairy free options for the dipping sauces.  Great place for a cheap snack, and a drink.

Just as their name says, coffee and music. Great coffee, and soy options.  Oh, and they sell records and play good music (hence ‘vinyl’).  The owner told us where to shop for that Icelandic pressed Homogenic record. God, Iceland is cool. 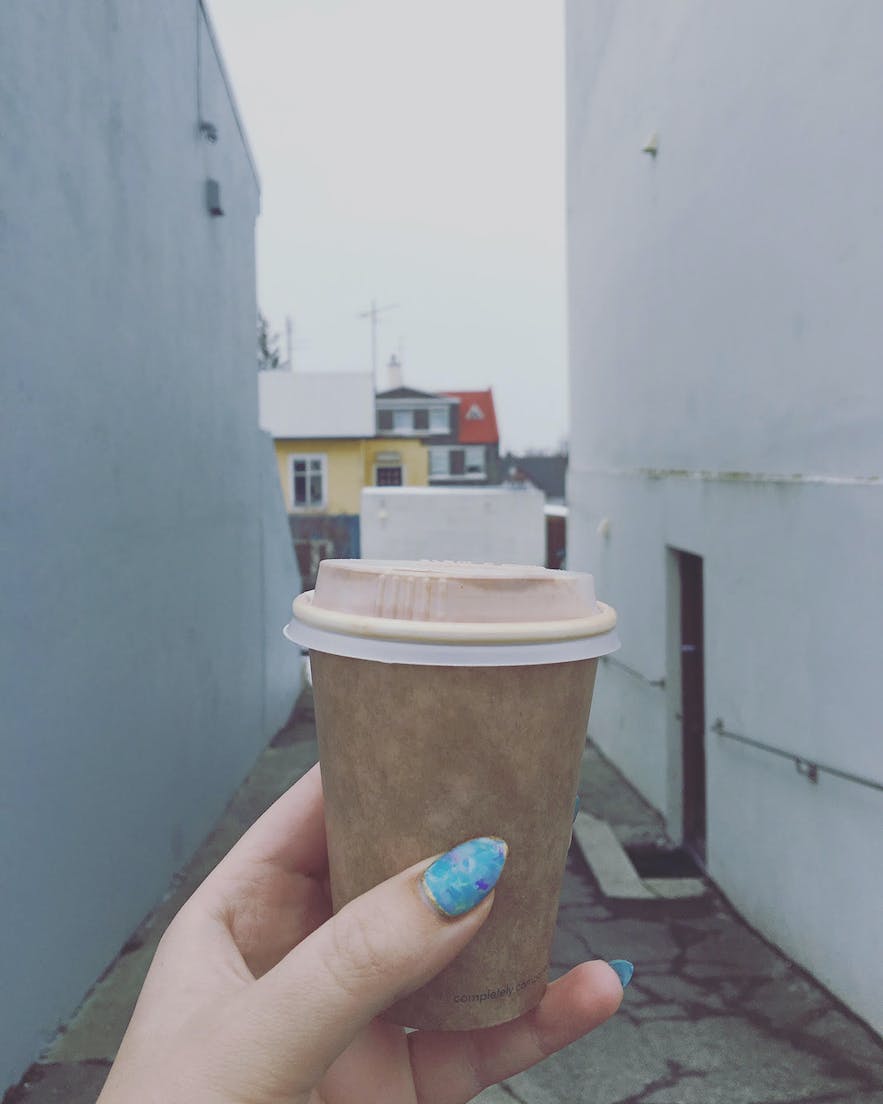 Another cute ass coffee shop, with good coffee and almond milk/non-dairy options.  Get something wrong for once, Iceland (Panama Papers don't count...)!

Not only is the Blue Lagoon by far one of the coolest places I have every been to, they have an internationally renowned restaurant that I was able to eat at in just a robe (before 5PM). It's no wonder it's one of the 25 wonders of the world (see my video here).  There is no such thing as 'low season' in Iceland anymore.  This place is popping' at all times.  So, buy your entrance tickets ahead of time, otherwise you are more than likely to be turned away (like two of my hostel mates.. sad face).  Keeping a cap on things ensures that the water does not turn into a cesspool of tourists.  With that said, buy your bus transportation on their website, unless you have a car (it's near the airport, so you can visit to or from the KEF airport).

If you pay an extra dime and go premium, you will not only beat the lines (which are likened to Disneyland), but you will get an algae face mask, a free drink of your choosing, a robe, towel, sandals (to keep!), and a complimentary glass of champagne at the restaurant. The restaurant itself is built into a lava cliff, for starters.  And the food, including the gluten free bread are to die for. We luckily shared a three course meal, because they are huge. Just to recap, go premium, share a meal with someone here, and get a massage on top of the lagoon healing water.  Can I go back now?

Other restaurants that I have heard are GF/Dairy Free friendly, as well as delicious, but didn’t have time to munch at:

For an entire list of GF friendly eats all over Iceland, check out the The Coeliac Plate’s extensive list. 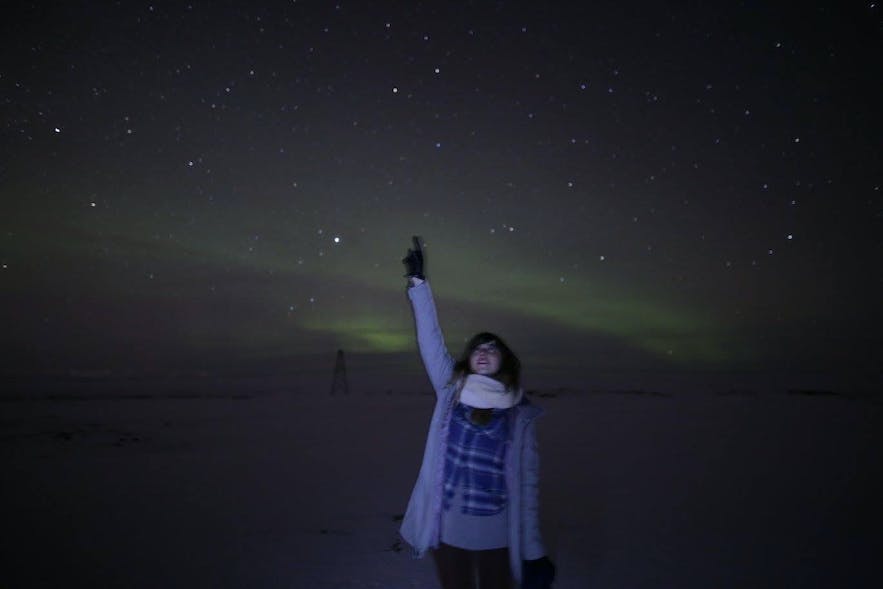