Eliza and Guðni - Insights about Icelanders

Not being an Icelander myself, I don’t feel qualified to generalise. But I can offer insights about particular Icelanders whom I’ve meet, either in the flesh or over our amazing World Wide Web.

I got to know Eliza through the Iceland Writers Retreat (IWR), an annual event in Reykjavík that she co-founded with Erica Green.

Erica is on the left and Eliza is on the right, this photo courtesy of IWR and Roman Gerasymenko

It took me a year to earn funding to attend IWR and, during that time, I became a friendly acquaintance by email with both Eliza and her husband Guðni, mostly because of my questions. I always have plenty of questions!

First I wanted to know about children’s play areas and nursery settings in Iceland during the 1980’s. So I asked Eliza and she didn’t know but said she would ask her husband. Through Eliza, Guðni offered me some helpful suggestions- about playschool, outdoor playgrounds and what park equipment was available at that time. 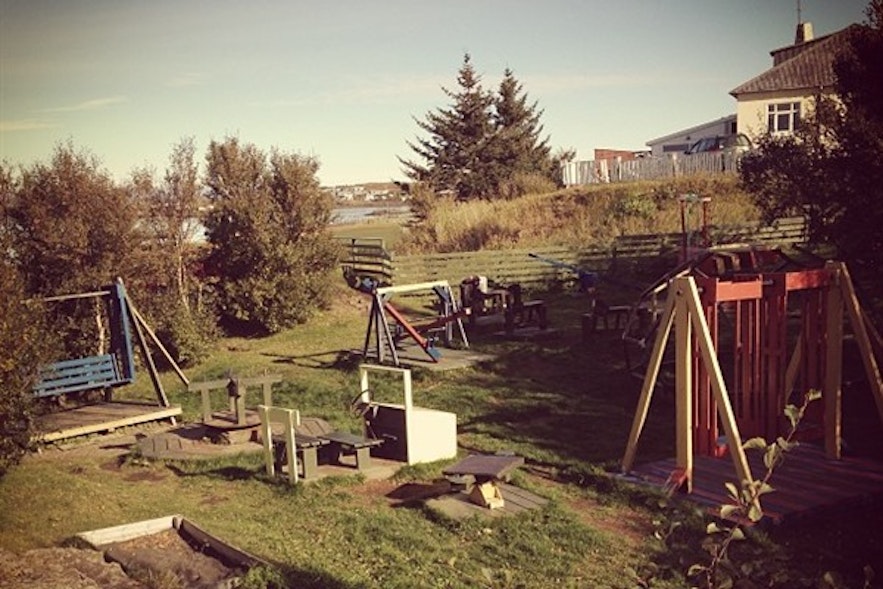 Bjössaróló Theme Park was designed and constructed by Björn H. Guðmundsson (1911-1998), a craftsman, master carpenter, idealist and environmental pioneer. He began this project near Borgarnes in western Iceland in 1979 using recycled wood, metals and other salvaged materials for the play equipment

Next I wondered if there was a public place in Reykjavík, during 1995, where people could watch something together on television. I was thinking of the electrical section of a large department store. I asked Eliza about this and she asked Guðni. He replied with information about Sjónvarpsmiðstöðin, a television shop in town that has been in business since 1971. The perfect setting for one scene in my novel-in-progress! 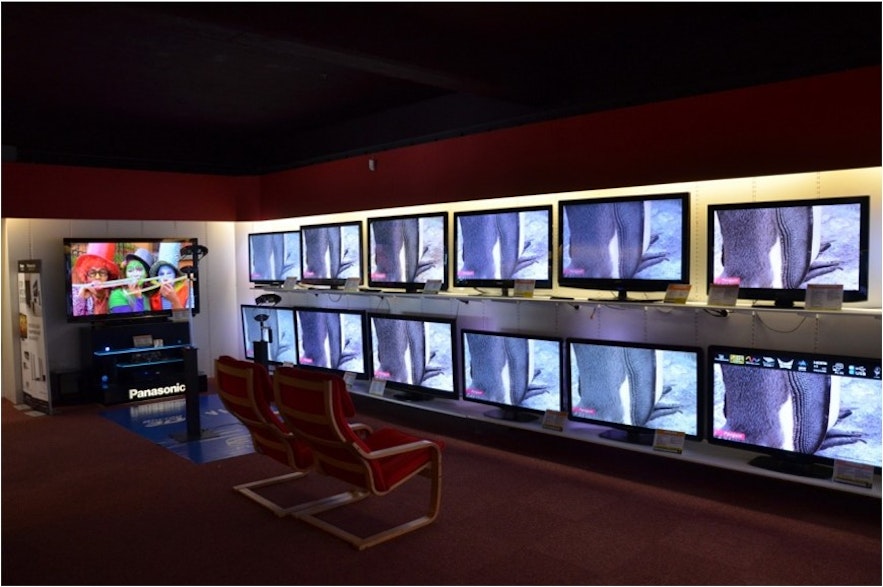 Boldly, I persevered with yet more questions. I needed to know which television programmes were showing on a particular morning in 1995. I asked Eliza and she, very obligingly, referred my query on to Guðni. He promptly answered with a picture of the television guide for that very day. How amazing and helpful was that?! 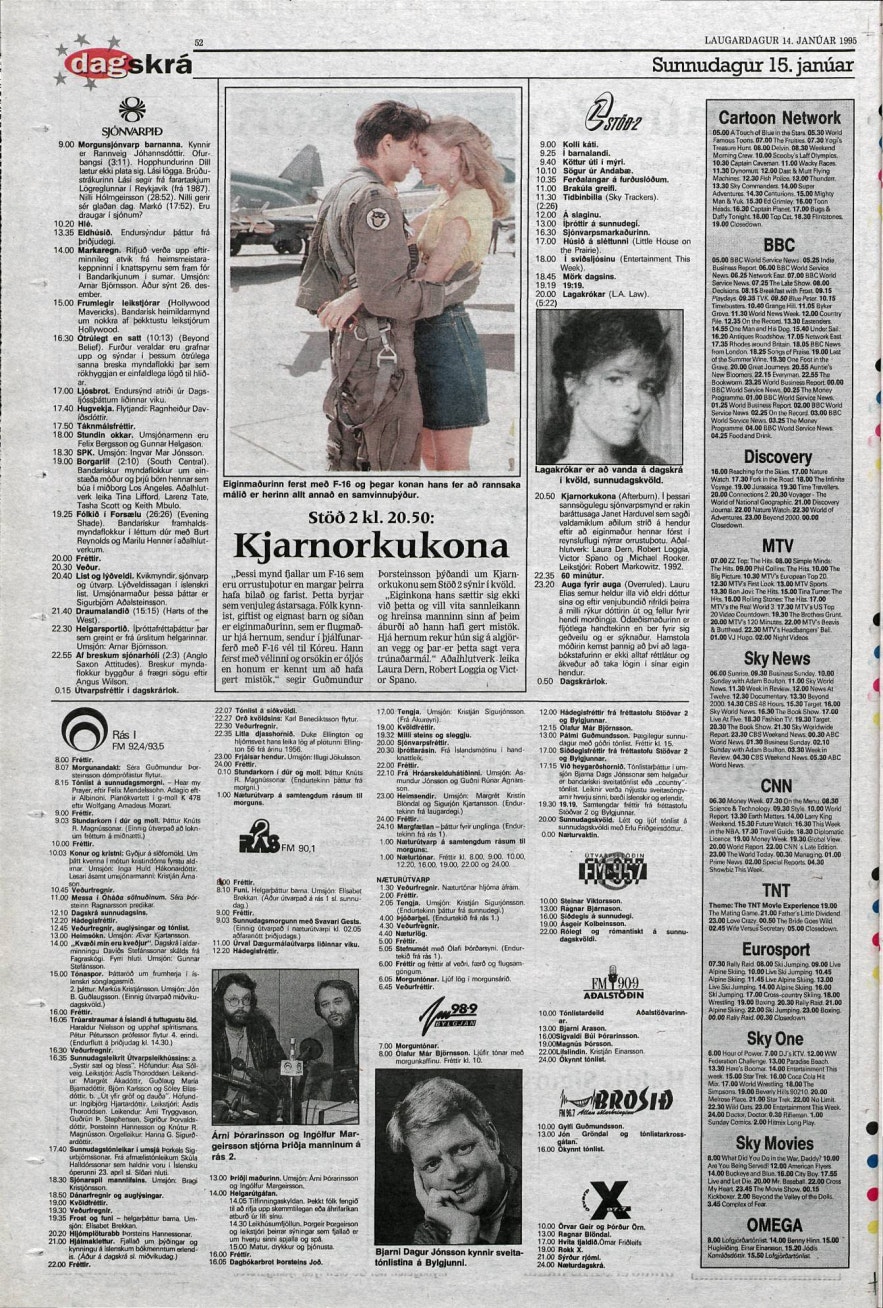 When I asked Eliza about the queueing habits of Icelanders, she knew the answer to this question herself. 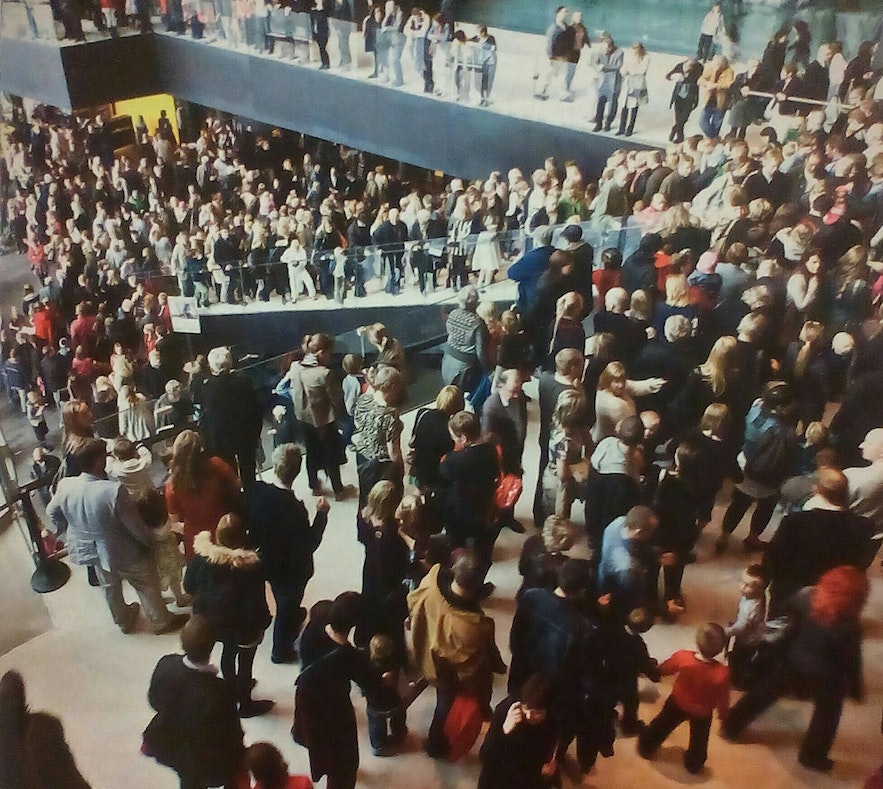 This year I physically met both Eliza and Guðni at IWR 2016 after a year of email communications.

Guðni led a Golden Circle tour for the IWR writers. At Þingvellir, the open seam where two of Earth’s huge tectonic plates meet and are slowly spreading apart, Guðni steered one participant in her wheelchair down a ramp. 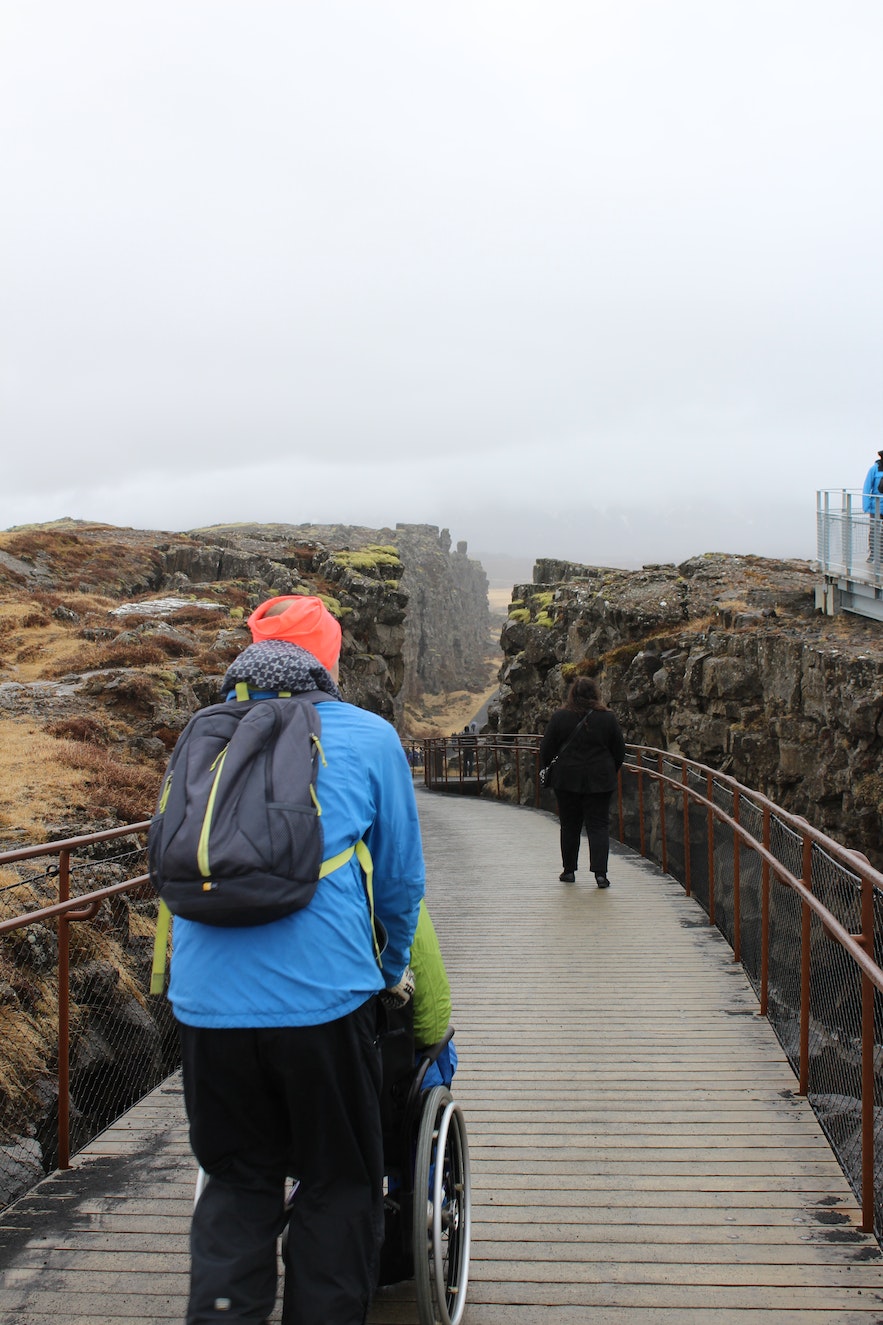 He jogged down! I was worried and glanced at Eliza but she waved her hand and explained that Guðni was accustomed to helping a disabled relative and, as I watched the outcome, I saw the wheelchair slow from friction to a safe speed when the track levelled out. 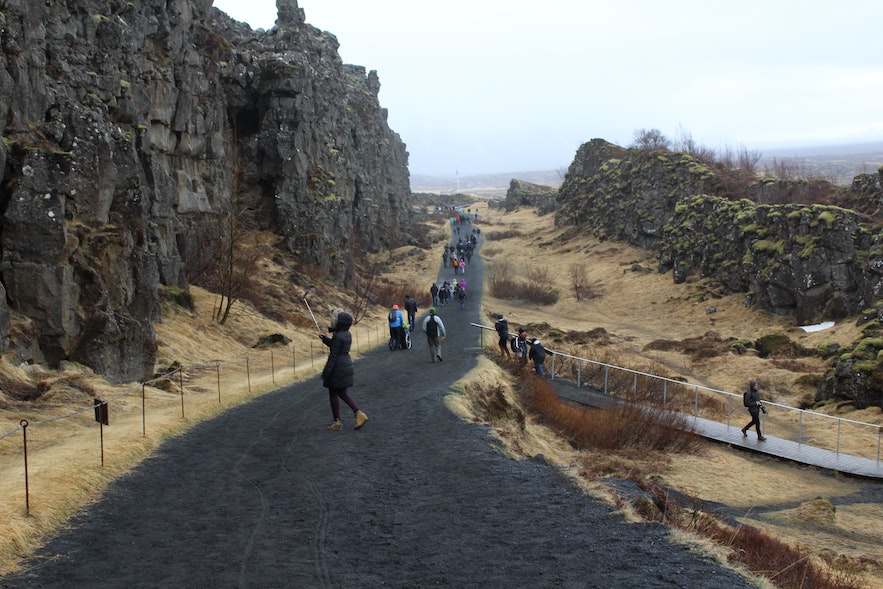 He had obviously made a sound risk assessment while also providing this lady with a thrilling downhill adventure.

At Lögberg (the Law Rock) Guðni read a poem to us, both in its original Icelandic and in English. 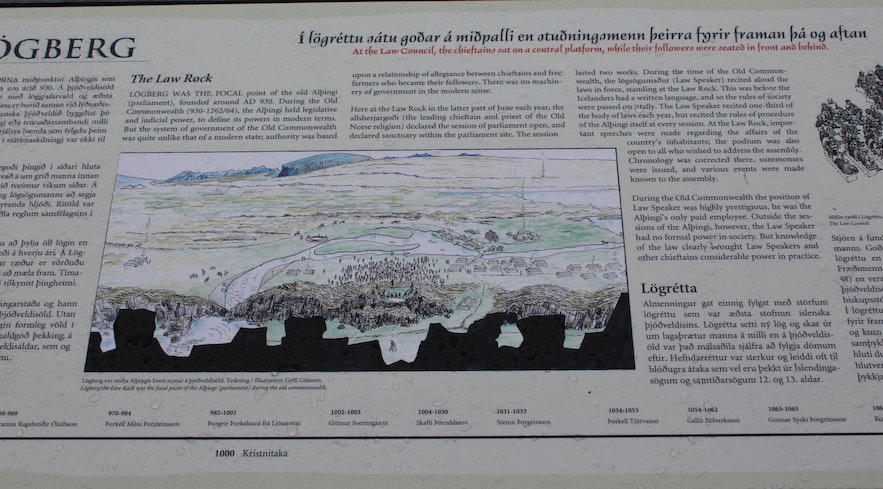 Lögberg has been a focal point for Icelandic leaders since 930 AD. On this spot, the early rules of Icelandic society and procedures for the Alþingi (National Assembly) were recited, important speeches were made, summons were issued and significant events announced. 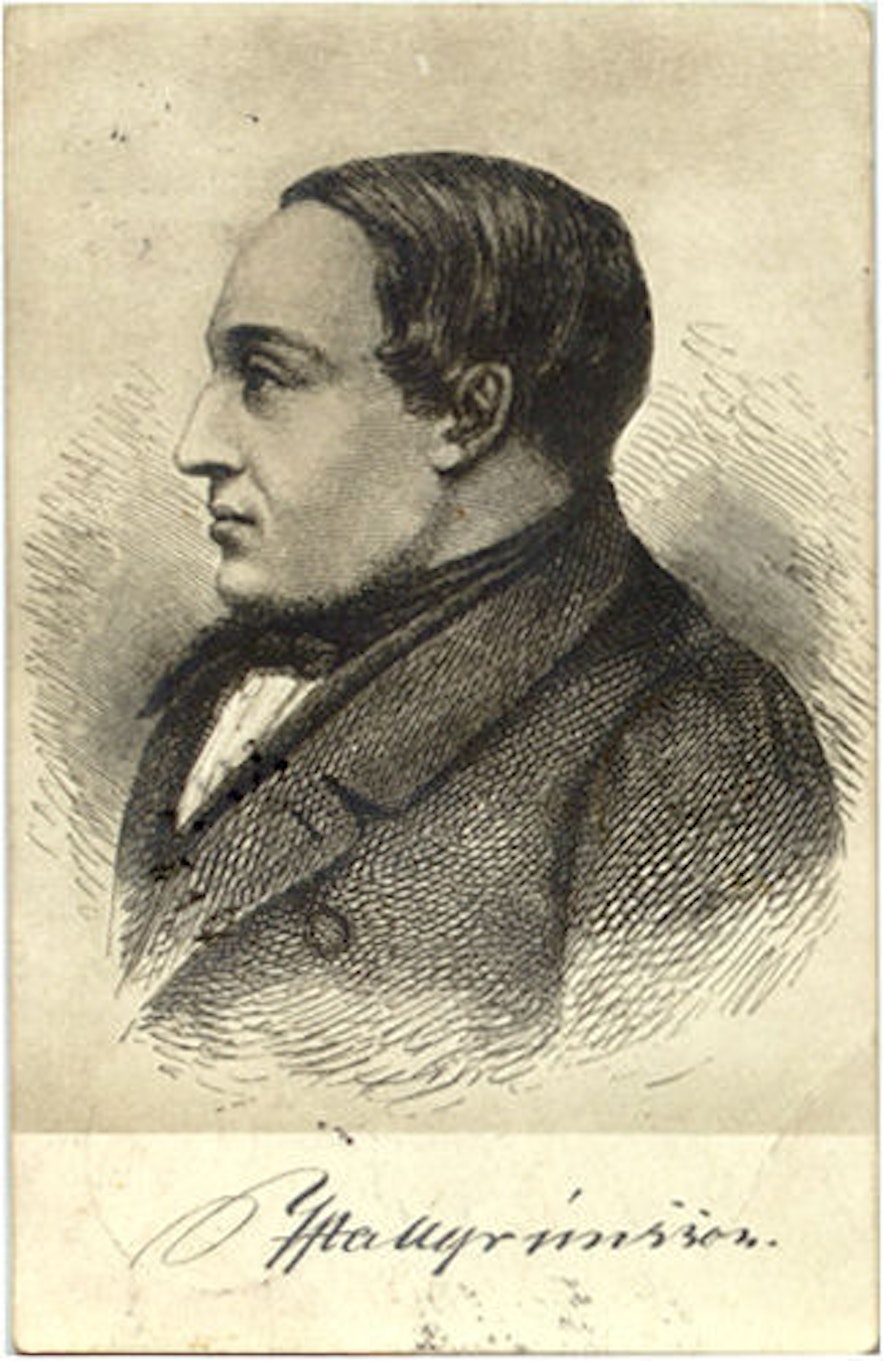 The poem Guðni read was Ísland (Iceland), written and published in 1835 by the Icelandic poet and natural scientist Jónas Hallgrímsson (1807-1845).

This translation of Ísland was made by Dick Ringler of the University of Wisconsin in Madison, a man who devoted many years of his life to the study of Jónas’ work. 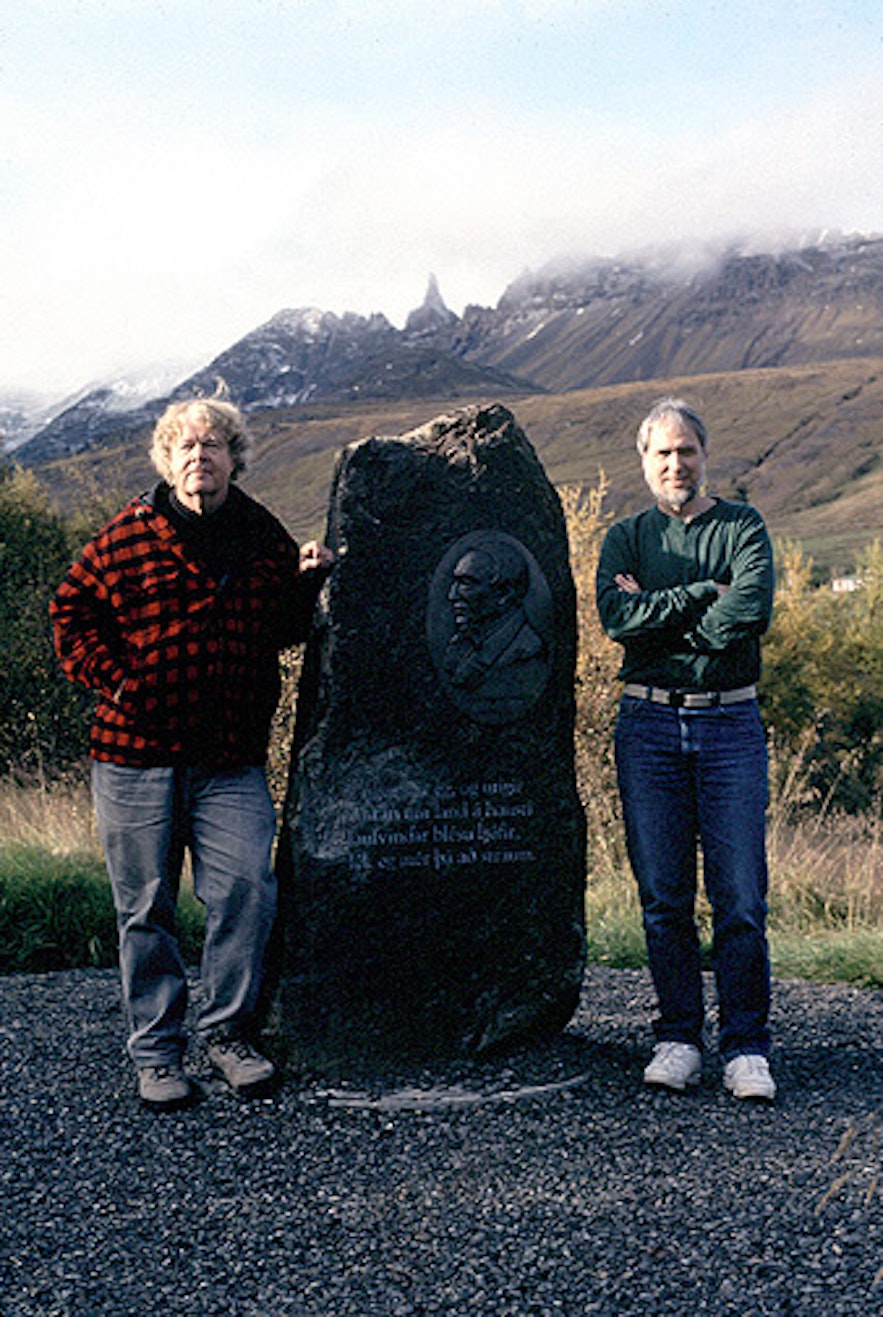 Dick Ringler with Peter C. Gorman of University of Wisconsin Library Services, standing either side of a memorial stone to Jónas Hallgrímsson in Öxnadalur

Guðni explained that he chose to read Ísland to us because of its majesty and the influence it had on Icelanders in the years prior to their national independence (1944) from Denmark.

Jónas was a feisty young man of 28 when he and some friends from university founded a progressive, new Icelandic journal called Fjölnir. 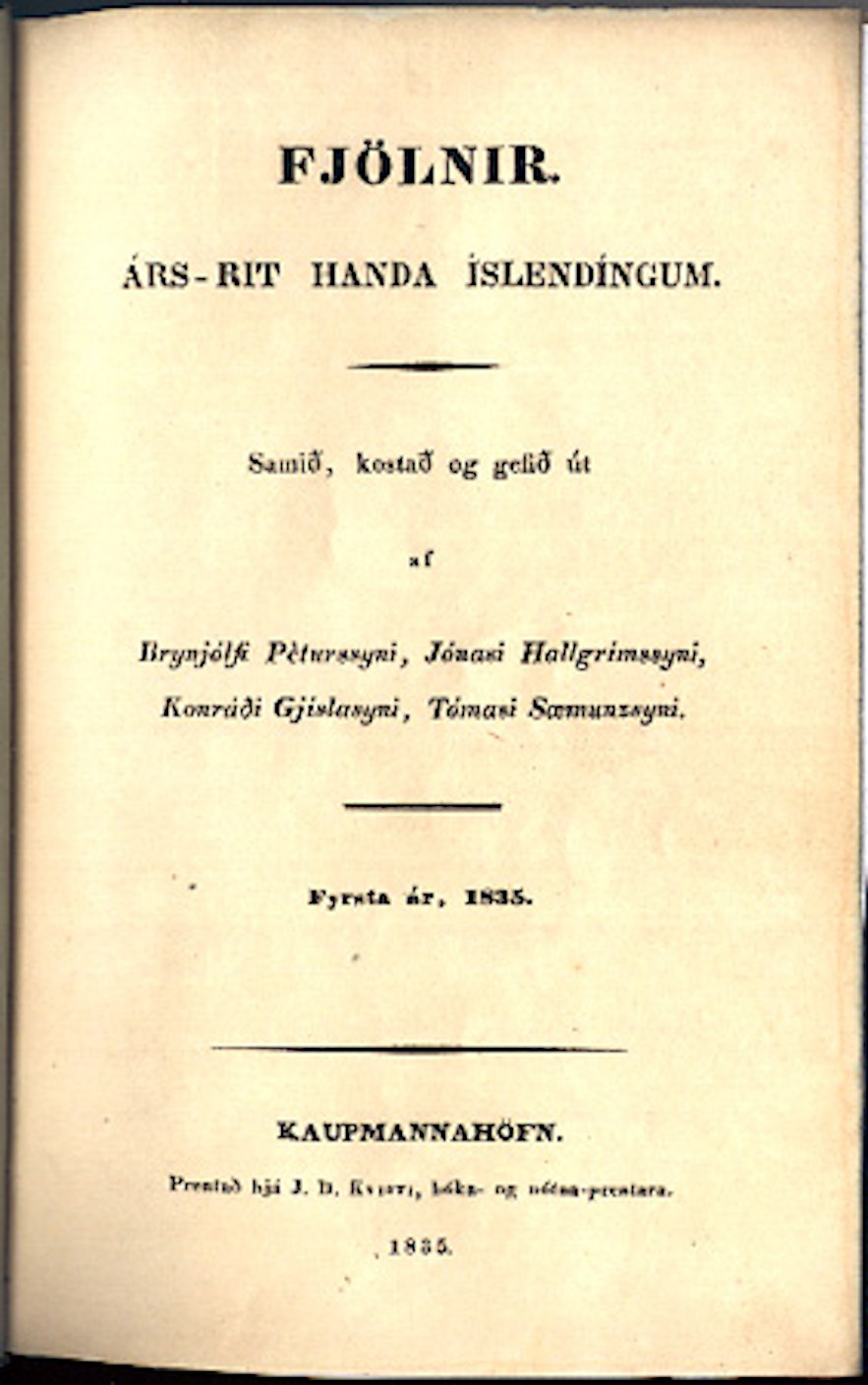 The word “fjölnir” appeared in Snorri Sturluson’s Prose Edda, where it was used to imply "manyness, multitudinousness."  Konráð Gíslason , a co-founder of Fjölnir, explained that their journal was intended “to attract to itself all the forces wishing to work together in the nation's interest, and we wanted its name to suggest this".

A view of Þingvellir (looking west) during Jónas’ lifetime

Jónas poem Ísland was published in Copenhagen in the first issue of Fjölnir. The Fjölnismenn were passionate about truth and a renewed integrity for the Icelandic language. Although still under Danish rule, they refused to allow any words of Danish dialect into their journal. Fjölnir was to be written purely in Icelandic. They were also keen to encourage national independence for Iceland and a reinstatement of the Alþingi at its ancient site of Þingvellir. 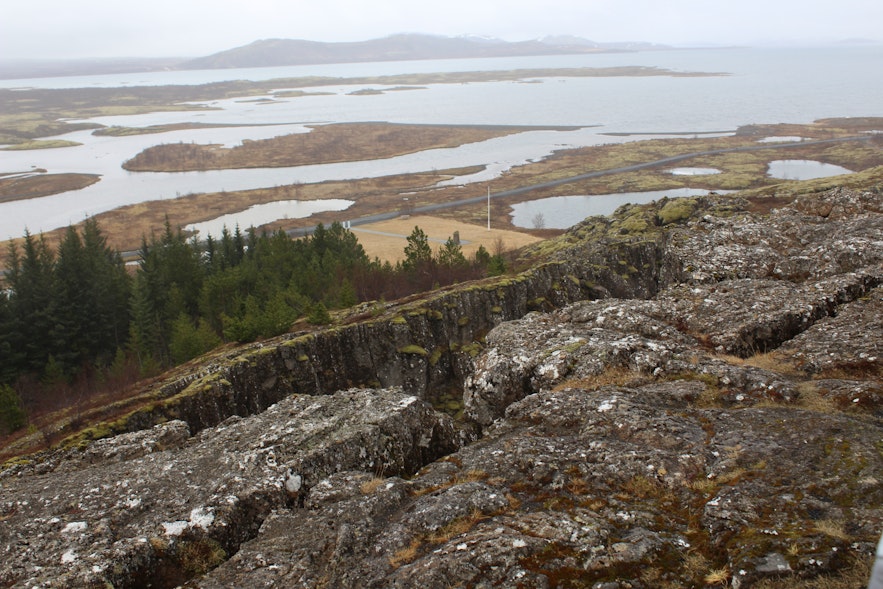 In doing this research, I have learned that Guðni chose to read Jónas’ most famous poem at a location intrinsic to the poet’s personal manifesto. 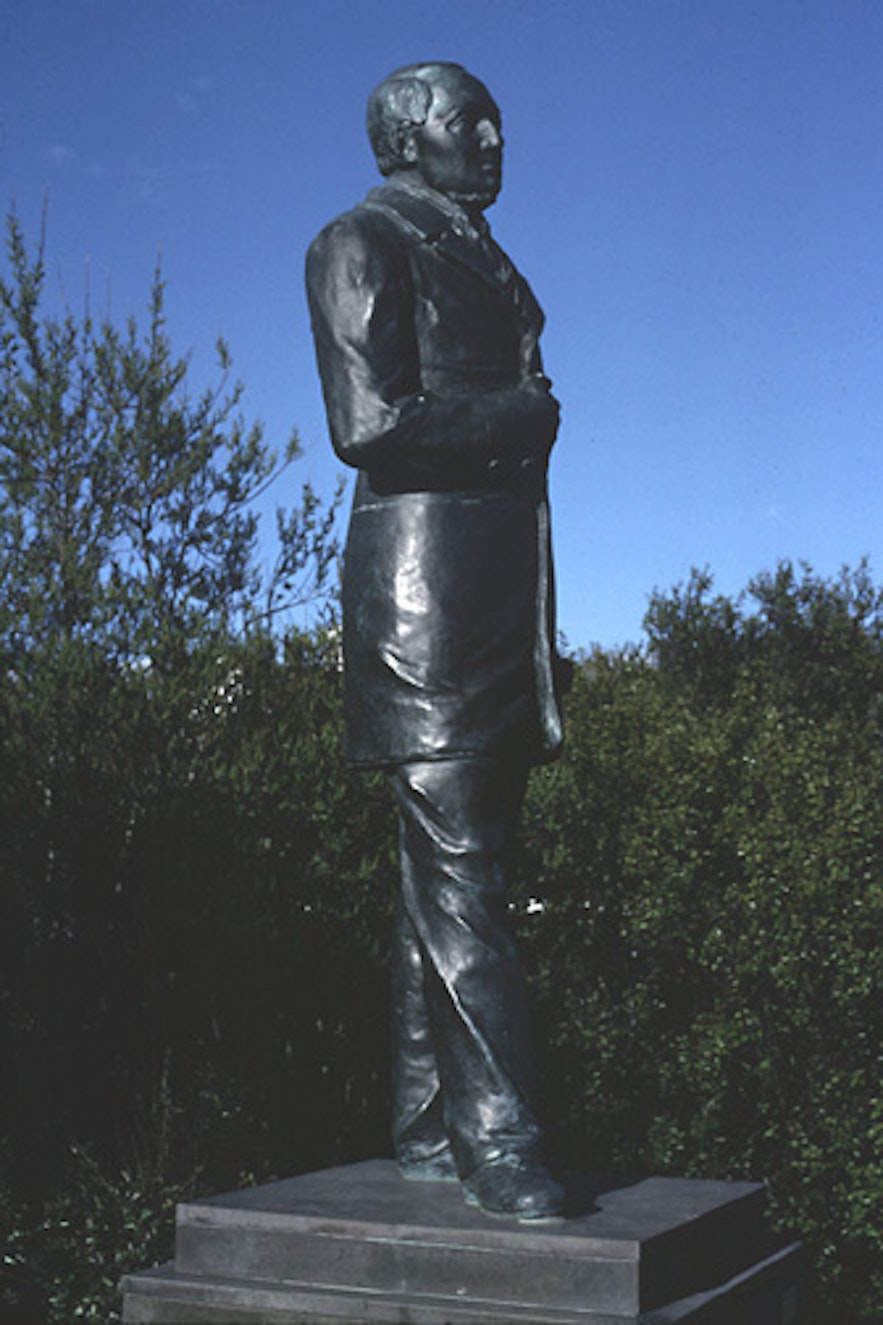 This bronze statue of Jónas, by the sculptor Einar Jónsson, overlooks The Pond (Tjörnin) in downtown Reykjavík

If you wish to know more about Jónas Hallgrímsson, here’s a link to Ringler’s extensive research: 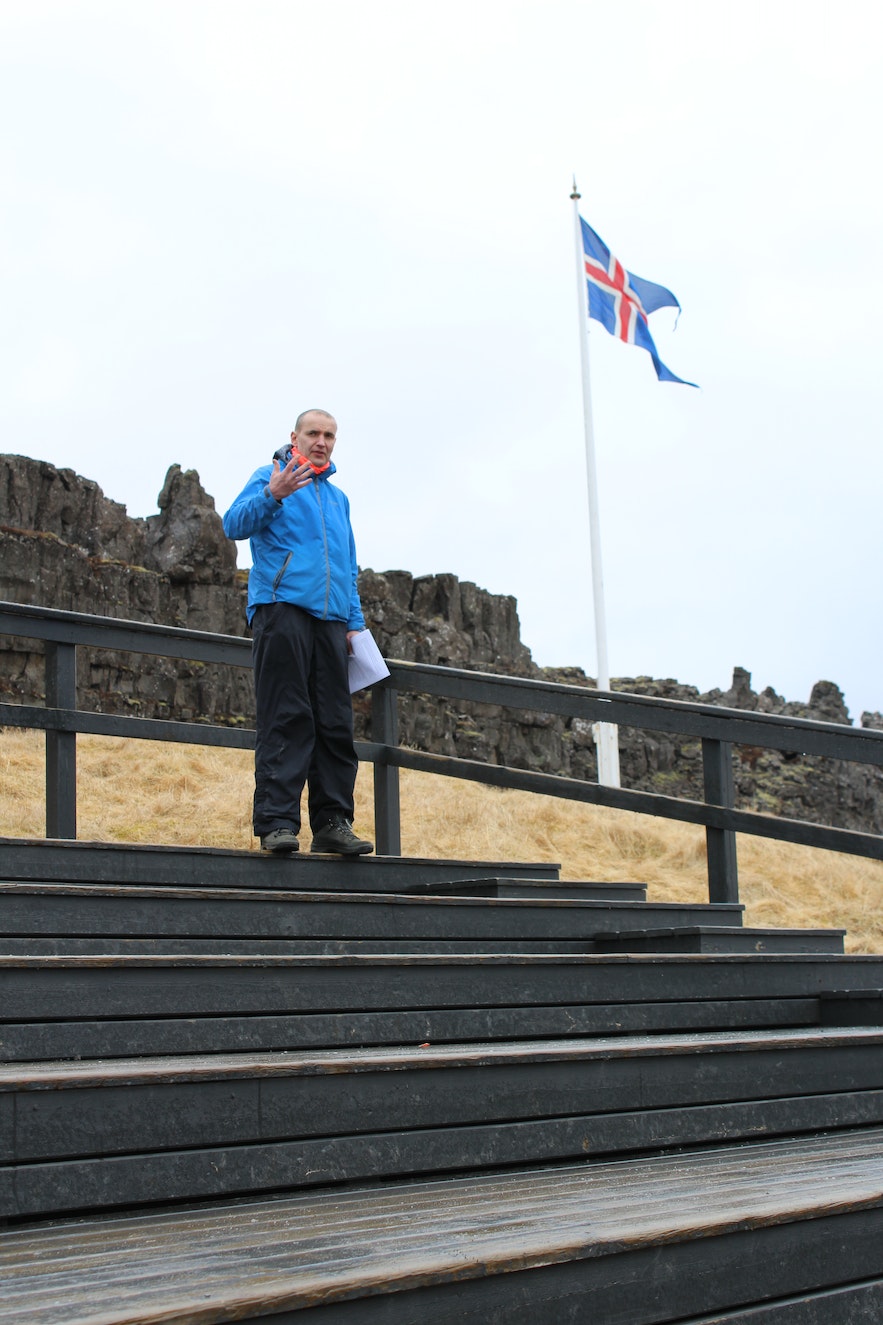 Guðni’s reading of Ísland at the Law Rock happened mid-April 2016. In retrospect, it seems an even more appropriate gesture as he himself has since become a very popular candidate for the Icelandic presidency!