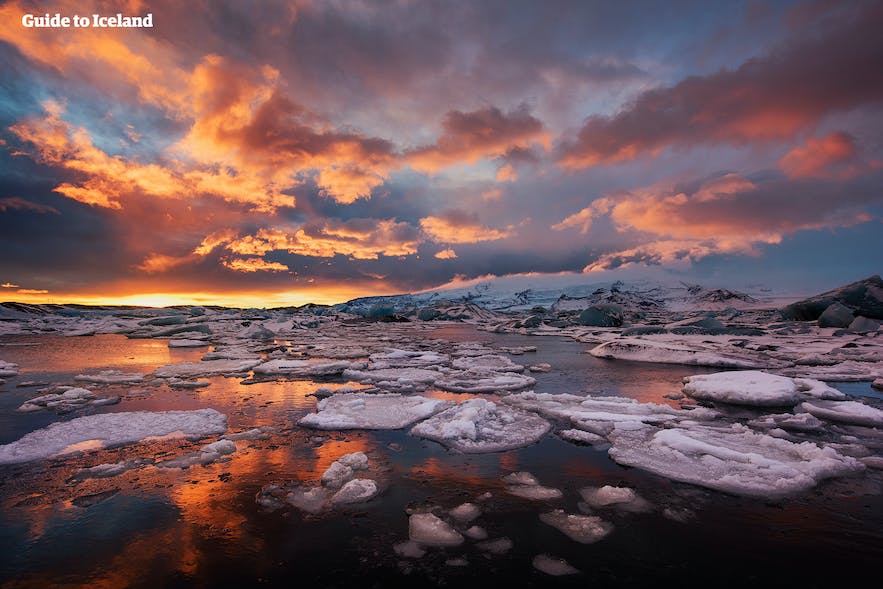 It was at the end of March 2018 that I and my wife needed a vacation. My wife grew up in the Third World and as a Filipino she found the idea of ​​traveling in the country-side on the island a challenge because in the Philippines in the country-side she often encountered loneliness and poverty. But when I mentioned Jökulsárlón glacier lagoon, she suddenly changed her mind. After we had packed up all sorts of useful things, the trip started.

What should be paid attention to when driving the ring road with a small car in Iceland in the winter?

There are many things to consider!

First of all, you have to be sure that the weather is going to be ok. This means to explore the homepage of the Icelandic weather-centre and be sure that there is no snowstorm.

What happens frequently is that travellers rent a small car that comes without spiked tires. If it should snow a lot, those type of cars are often stuck in a traffic jam and block the roads until the Icelandic Rescue Service come to the rescue with specially equipped vehicles.

Very typical are travellers who do not speak English and do not understand the regulations of the car rental company. With new cars, it is sufficient in many places in the world to have only the daytime lights turned on, that causes the tail lights to be turned off, which causes the car to be unrecognisable in a snow storm and effectively often causes accidents.

Switch the lights to normal setting just as you would in normal lowlight conditions so the tail lights are on. This setting of lights is always compulsory in Iceland even in summer when it is bright for almost twenty hours.

What you should consider in advance is what you bring with you on the trip. Food can be more expensive in the countryside than in the low-cost supermarkets in Reykjavik. But what is important in this question are the things you bring with you for safety.

So, winter clothing is very important. You can end up in a traffic jam or the car can get stuck and in the worst case be driven off the road. Temperature fluctuations in winter can be very extreme and you have to be prepared to leave the warm vehicle in a snow storm to push or in the worst case to get help. All other security items should be brought if possible. This includes: first-aid kit, tools, pocket-knife, emergency food, spare clothes, tent, sleeping bags, shovel, salt or sand, etc. 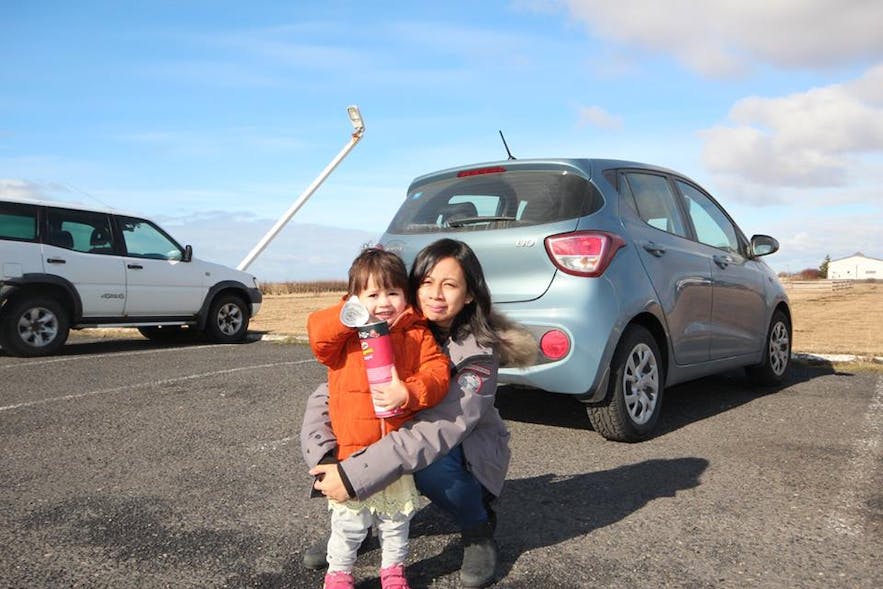 My wife Katrina and My daughter Mira Sol at Hvolsvöllur. Behind them is our Hyundai i10 with which we drove the tour.

The landscape was without snow and the weather forecast was good. The grass had the yellow winter colour and we had the plan to drive to Gerði at Jökulsárlón without making many stops on the way.

So, we drove by the beautiful waterfalls in South-Iceland and made only a technical stop at Hvolsvöllur and stopped by the farm Þorvaldseyri where we could take a look at the Eyjafjallajökull volcano and glaciers. We had lunch in Vík but as we drove on we noticed that the landscape and the mountains were covered with snow. I called the road information on 117 that declared that the way to Jökulsárlon was passable, also with a small car like mine.

What should be considered on the ring road with a private car in winter in Iceland?

The maximum speed on the ring road is 90 km/h - in the best conditions. If you drive through villages, the maximum speed is often fifty or less. The roads are often snowy during the winter and there can be ice under the snow.

It is important to look at the homepage of the Icelandic Road Administration which provides information about wind strength, closed roads, icing of roads, and roads closed due to weather. The weather in Iceland is unpredictable and weather forecasts are only 80% accurate.

For example, the wind can suddenly drive the car off the road in a blast. This can happen when the wind is very strong. The homepage of the street administration gives information on the normal wind strength and how strong the wind can be when it blows. In strong-wind conditions or on icy roads drive slower, that reduces the risk of an accident.

In addition, openings may have formed on the asphalt in the winter, causing damage to the tires and the chassis in particular if these openings are not taken into account because of fast driving or because they are covered by snow. Such road damage is not often repaired in winter but the roads are cleared.

Many inexperienced drivers drive too fast and above the speed-limit and often have to pay hefty penalties since there are speed cameras installed by the Icelandic police next to the road. Some locals drive fast, but they often know exactly where speed control takes place. If you are on the street and are being tailed by naughty drivers then you should do everything to let those pass who are in a hurry.

Short shot with my Kitvision camera showing the condition of the snowy landscape and the roads.

About five o'clock in the afternoon we made it to the glacier lagoon after which we had made a stop on the Skeiðarársandur where in 1996 there was a volcanic eruption at Grímsvötn.

The big tidal wave took with it 12 kilometres of the ring road and tore away two bridges. Visiting the Glacier Lagoon was a unique experience for me and my wife who was worried about the safety of our daughter. But our daughter only bravely threw stones into the lagoon, which is only two degrees year-round, and whose danger is often underestimated by travellers, so are the icebergs that can suddenly turn in the water. 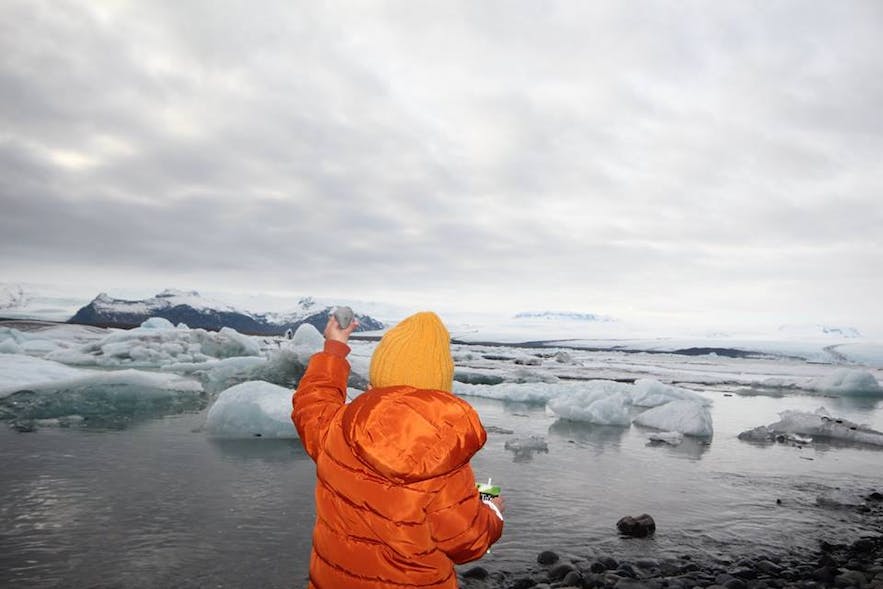 My daughter Mira throws stones into the lagoon.

In the night that followed we slept at Gerði a simple farm-accommodation. The next morning, I was immediately worried when I looked out there was snow everywhere and it didn't  stop snowing.

We started our trip back right after the breakfast because it was east of Vík that much snowfall was predicted. So, we drove back over the whole one-lane bridges. When we arrived in Vík around lunchtime, we realised that we had escaped the winter.

South Iceland with the black beach Reynisfjara we visited in peace and the waterfalls Skógar and Seljalandsfoss and the Skógar Museum. On the way back we spent one night in Hella in a cabin. And after the trip, my wife said: "This trip was the most enjoyable even more beautiful than our vacation in Spain."