Snorkelling in Reykjavik, Wet or Dry?

For many people, going into the sea and diving down is a real challenge because vacations are often booked by people who have reached their age. Many believe swimming, diving or snorkelling in the sea is only suitable for young people. But I want to think is that such experiences are suitable for all people. 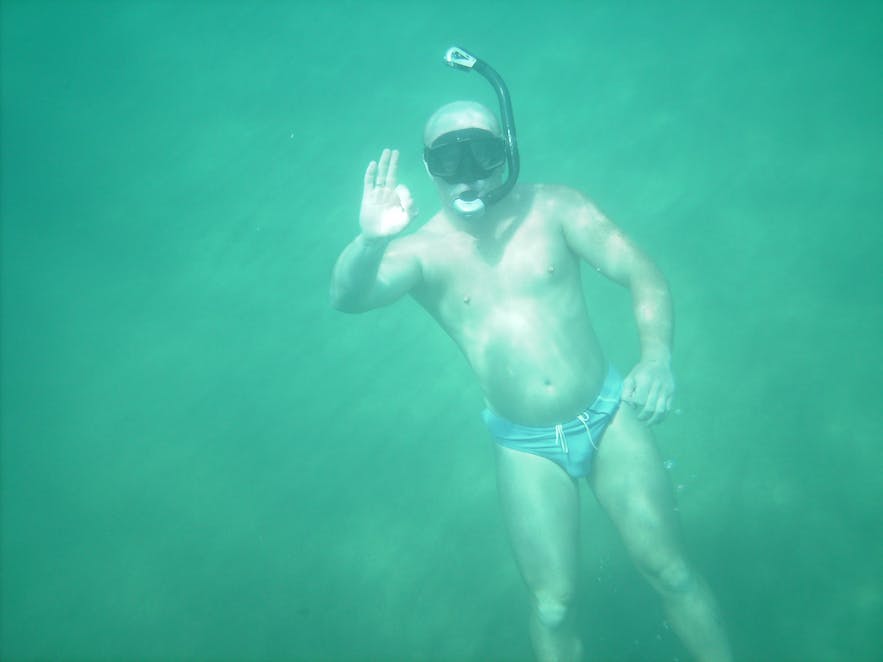 "It is said that the first form of life was born in the sea, and so humans return to their place of origins as the salmon swims up the rivers in the summers to the place where his first life began".

I had my first snorkelling experience as a kid in Italy and I could remember how it was to glare into this wonder world to take a look and see an octopus and smaller fish.

Many years later, when I was in Spain for business, I went on a snorkel trip with a Polish employee.

The same thoughts crossed my mind: "I am not a good swimmer." "The current is too dangerous." "What do I do if I would get a spasm?" The Polish employee told me: "You will swim like a cork."

The snorkelling trip did not let me down. I bought a wetsuit, diving goggles, a dry snorkel and weights that made it easier for me to dive down. As soon as we got out, we met hordes of fish circling us and looking at us. I was so impressed by this experience that I had the idea to show other people what I had seen in the sea. Also, the question was whether I could go further and also deeper. 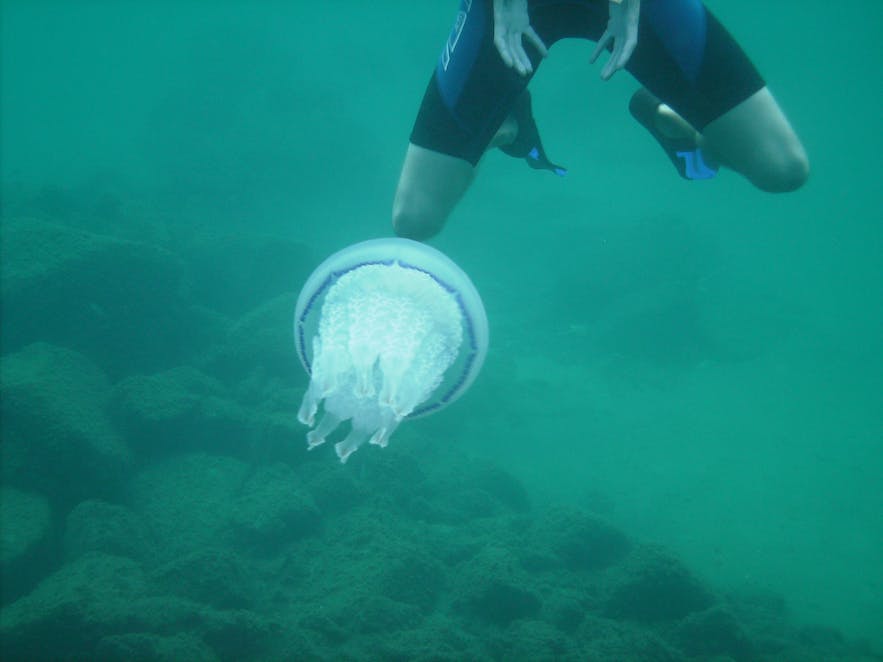 A free-diver pretends to catch a jellyfish, Spain 2009.

A few years later I did my divers-license with an Icelandic dive company in Silfra. The Silfra is a part of the Þingvallvatn-inland-lake which basically has groundwater that has flowed a very long distance underground from the glacier Langjökull to the Rift Zone at Þingvellir National Park.

The diving companies sell the tour telling one that one could dive between the continental plates of America and Eur-Asia but that is only in a very broad sense right. Although the American continental plate is within sight of the Silfra Gap, the Eurasian Plate is a day trip further east by car.

"Like the untrue presentation of a newspaper report that I once got to read that in the fissure you can touch America with one hand and Europe with the other, the only right thing to say would be that one hand points west the other to the east, and even In Reykjavik you can eat out on the edge of the Rift Zone ".

When I did my divers-license, I passed the theory exam without a single mistake, but at the physical exam that took place in the Silfra, I struggled hard.

Breathing at depth of ten metres felt very difficult and suddenly the mouthpiece exploded in bubbles of water so that I could not see anything and I panicked and resurfaced much too fast.

The instructor told me that because of the cold water, ice crystals had formed at the back of the air tank cap that had caused a blockage in the diver's breathing system and diving lung.

Although it was a popular dive company I have to say in retrospect that the devices were offered in a rather worn-out condition and that for example the outdated dive meter was not comparable to the beautiful dive computers shown in tutorial video and didn’t even work.

"Since then, I've given up diving although on my trip to Asia in the Philippines I sometimes had the idea to start again. I stayed with snorkelling and my scuba diving and diving certification would contribute to my snorkelling experiences in the Philippines in a big way although diving in cold countries compared to the tropics is very different." 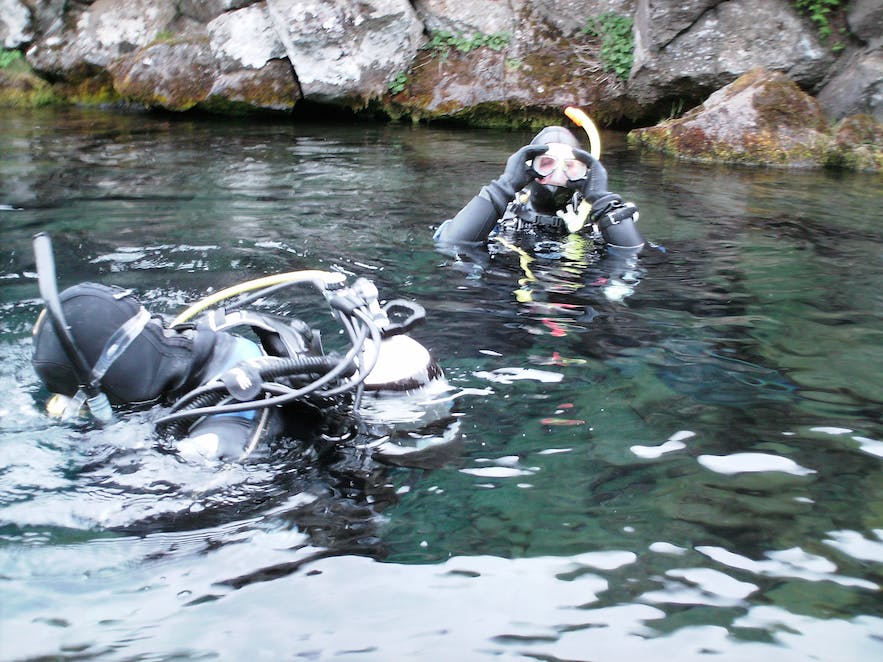 Picture of my first dive in the Silfra-fissure 2009.

Swimming in the sea in Iceland is an activity that has existed for more than a thousand years. The first settlers learned swimming and bathing in the sea.

However, here in Iceland, in the Central Atlantic Ocean, there are not too many good snorkelling spots and such activity is mostly practiced near the coast in places where the current is not too dangerous. Or in some of the countless lakes that are found on the island. I have been snorkelling for more than twenty years and here I have listed three of my favourite snorkelling spots.

A fissure in Þingvellir National Park filled with clear water where you can see a fascinating natural spectacle of caves and bottom sediments.

What is most interesting is the visibility of about 100 metres. For the Silfra-fissure you need a dry suit because the water is only 2 degrees Celsius and you have to book the tour with certified dive companies that visit the fissure and visits are strictly regulated because of diving accidents in recent years. 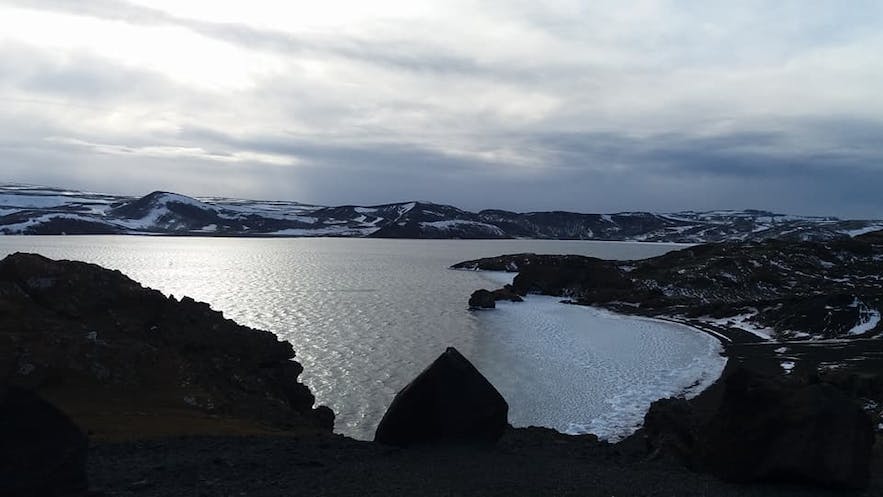 Lake Kleifarvatn is about 35 minute’s drive from Reykjavik and is surrounded by a high-temperature area that feeds the lake with warm water. Picture Katrina 2018

It is about 35 minute’s drive from Reykjavik and there are several places where you can snorkel at the lake. The water has a temperature of about 12 degrees Celsius over the summer months and you can easily swim or snorkel with a neoprene suit in the lake. If you are lucky you can see trout.

Also, there is a place where warm water emerges from the bottom and warms the lake where it is claimed that it feels like swimming in Champagne. As recommended, never go snorkelling alone, go with a company or a snorkelling buddy.

A film-clip that shows well what to expect during a snorkelling trip in Nauthólsvík.

Nauthólsvík is by far the best snorkel spot in the Reykjavik Capital Area and actually the only place where you should swim or snorkel in the city. 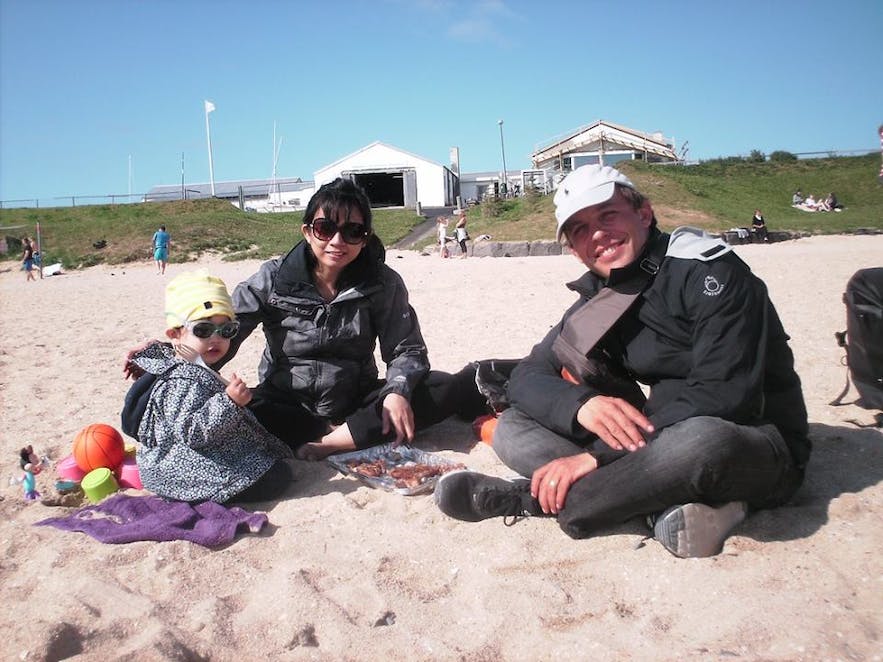 My family and I on a rest day at Nauthólsvík 2016.

The beach offers free swimming and bathing and there is nothing better than relaxing in the warm baths after a snorkelling tour. 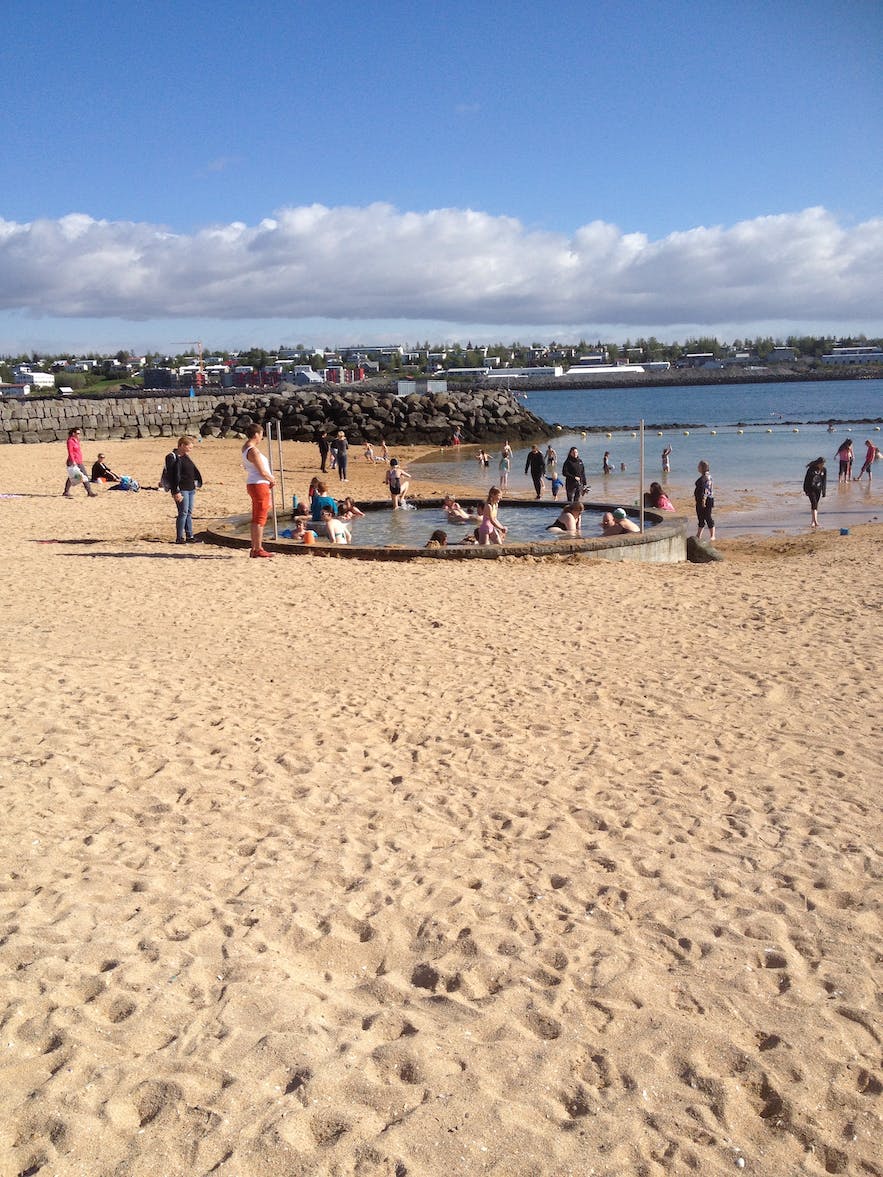 Nautholtsvíkin bathing beach with Moroccan sand, warm baths and the sea which is fed with warm water. Picture 2016.

Also, the sea is regularly checked for any signs of pollution that two years ago caused an accident of wastewater treatment plants around Reykjavik to be discovered. Snorkelling should only be done at high tide so that the algae are nicely visible as well as the sand-eels and jellyfish which are seen from time to time.

For snorkelling in Nauthólsvík you can contact Reykjavik Fun Tours.