A personal review of Eistnaflug 2016

Neskaupstaður is a usually a fairly quiet little fishing town. It has a population of roughly 1500 people and is located by the beautiful fjord Norðfjörður, with impressive mountains looming above and stretching towards the sea. For 12 years, however, it has been the location of one of Iceland most beloved and renowned music festivals, the metal festival Eistnaflug. Over the course of 3-4 days, the population is doubled as people from all over come to rock, socialize and generally have a great time.

Trailer for the Eistnaflug documentary At the Edge of the World, by Rasmus G. Sejersen. Just to give a little taste. ;)

The festival's name (meaning “flying testicles“) is actually a pun on another pop festival held at the same place, Neistaflug (“flying testicles“) and speaks to the fact that the festival started out small, as an outlet for the most hardcore metal, where bands and fans were a small group of people that mostly knew each other. It has grown over the years and branched out. While still focusing on metal, it also incorporates hard rock, punk, and indie, experimental stuff, pop, funk etc. Bands who have played there in the past include Skálmöld, At the Gates, Enslaved, Red Fang, Trypticon, Carcass, Behemoth, Napalm Death, FM Belfast, Ham, and Retro Stefson.

The festival is renowned of being one of the most friendly and well organized festival in Iceland. It‘s slogan is “It‘s forbidden to be a dick“. Organizers, staff, local authorities and, perhaps most importantly, the fans themselves, join together in keeping things civil and friendly and step in if anyone is indeed being a dick, as it were. There is a great sense of cameraderie at the festival, people are laid back and friendly and people look out for each other. As of me writing this, there has never been a charge of assault nor rape at Eistnaflug. Ever. Here‘s hoping that it will stay that way. Festival organizer Stebbi, for one, claims that he would not feel up to continuing the festival if such atrocities were to occur. Lest anyone mistake him, he stressed that he‘d never disencourage anyone to report such things, on the contrary he urges them to, if they were to occur.

This year, the first time I visited the festival, was the largest event yet and saw some of the biggest bands internationally and locally attending. Over 70 bands were playing. From abroad were Opeth, Meshuggah and Marduk from Sweden, Amorphis from Finland, Armenian and Assyrian band Melechesh, Belphegor from Austria and Immolation from the U.S.. Icelandic bands and artists included Agent Fresco, Ham, Sólstafir, Retro Stefson, Páll Óskar,  Misþyrming, Prins Póló, Dimma, Vintage Caravan, Ensími, Auðn and more. The festival had two stages, the smaller Egilsbúð (“Brennivín Stage“ and the larger sports hall (“Boli Stage“), with a bit of a walk between them (around 10 minutes or so). The foreign music press was there as well and panels were held about several aspects of the metal genre. Among the guests was anthropologist and metal ambassador Sam Dunn of Banger TV, maker of such excellent documentaries Metal! A Headbanger‘s Journey and Global Metal. 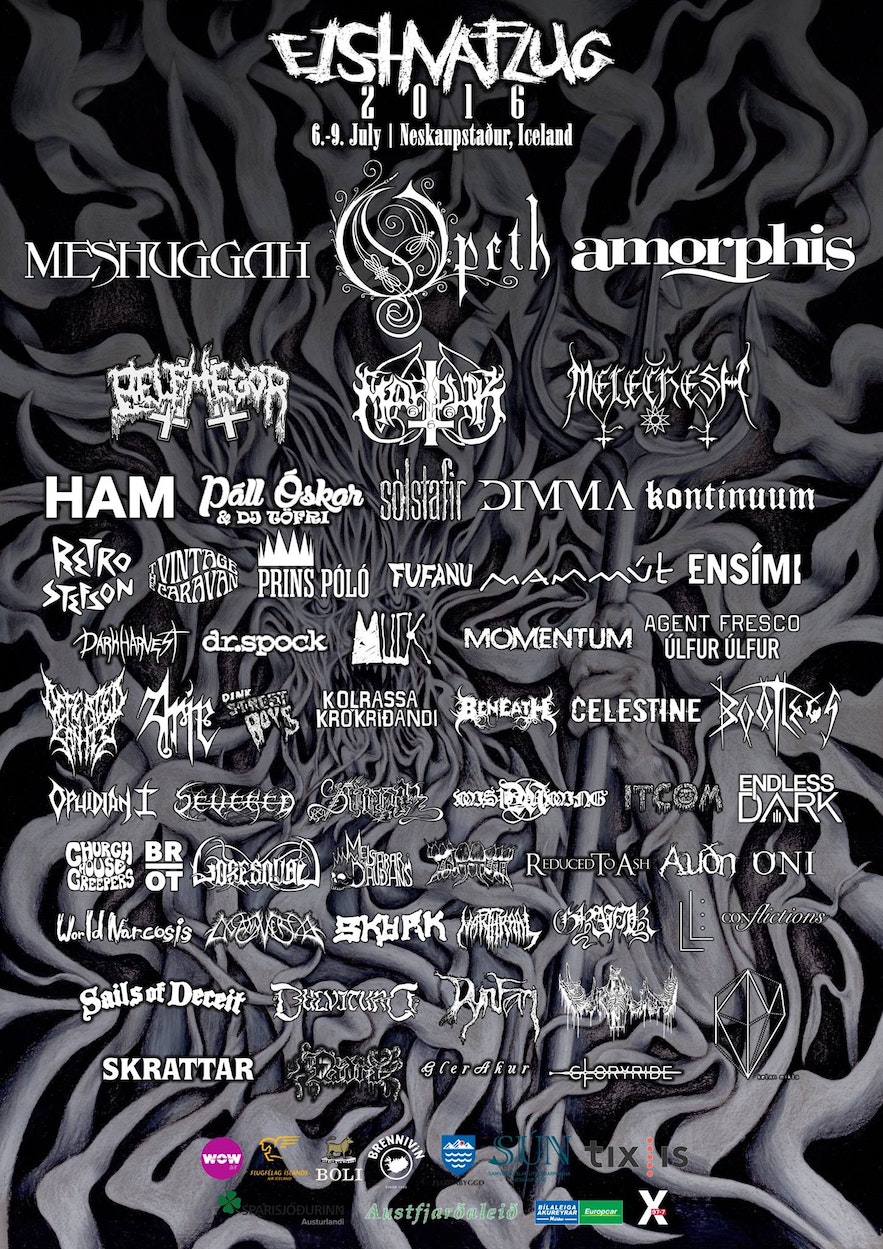 Me, my cousins and our friend arrived at the festival on its first day, Wednesday the 11th of July. However, since were driving from Reykjavík, we arrived too late to catch the bands on that day. We did, on the other hand, catch much of Iceland‘s top natural attractions along the way, as we drove the south coast, enjoying mountains, sands, waterfalls, glaciers and volcanoes along the way. We stopped at Vík and saw the basalt pillars of Reynisfjara and had lunch at Höfn. We also stopped at the Jökulsárlón glacier lagoon, which was particularly beautiful in the rays of the Midnight Sun. When we arrived at Neskaupstaður, we camped at the family campside (as opposed to the party campsite) in hopes of getting a better sleep, only to be frequently awoken by black-headed seagulls, who‘s horrid screech makes the arctic terns sound like a choir of angels. Ahead were three days of awesomeness... 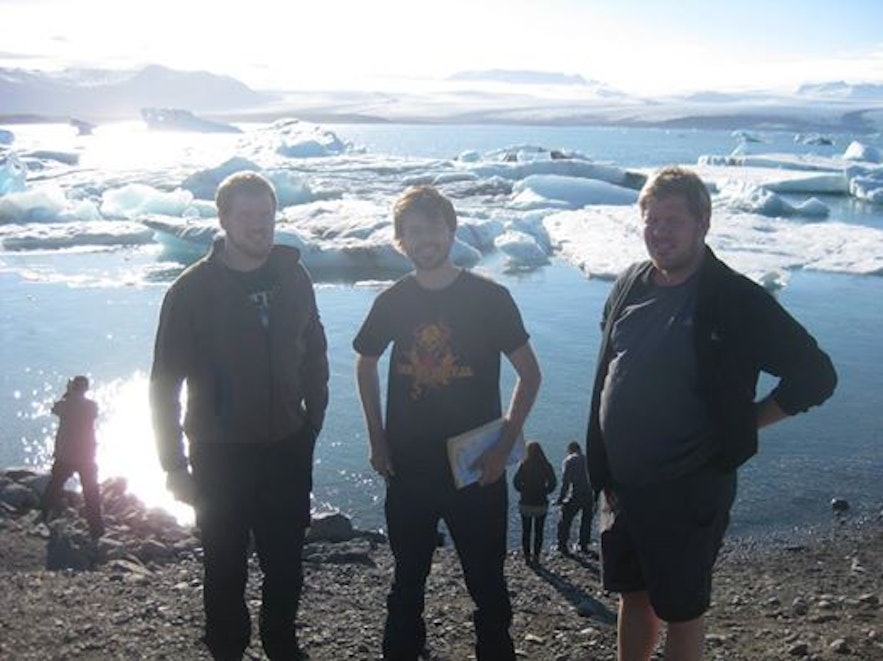 Me and my cousins at Jökulsárlón. Photo by Gunnhildur Reynisdóttir. 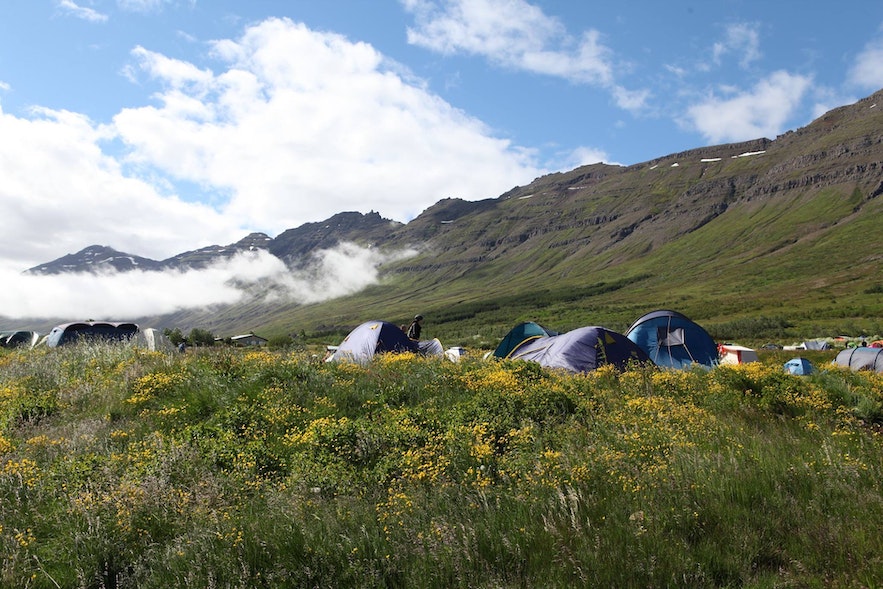 Our campsite. Photo courtesy of Eistnaflug.