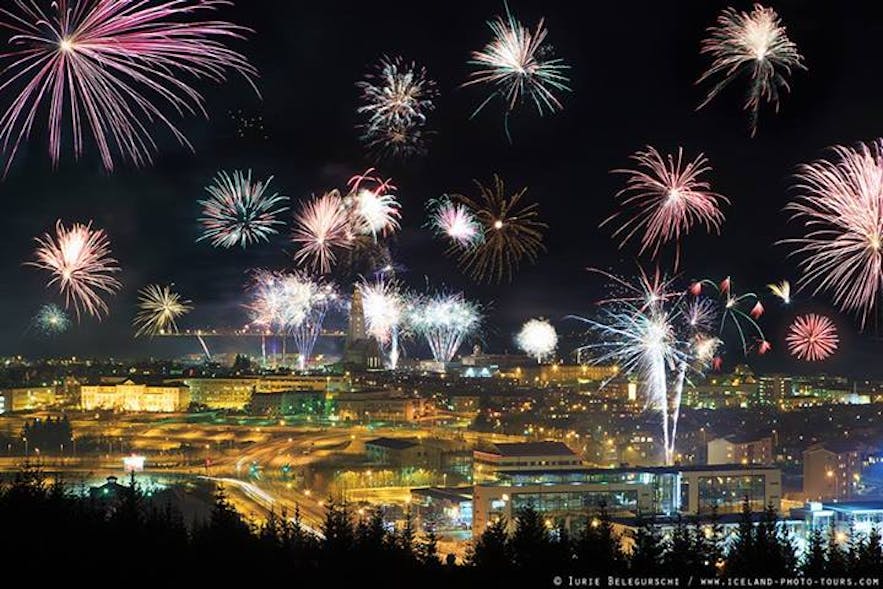 Þrettándinn, January 6th, is the last day of Christmas, as it is celebrated in Iceland. I wrote a bit about it exactly a year ago. As with New Year‘s Eve, this is a time when Icelanders gather with their family and/or party, bonfires are lit and fireworks are, well, fired. Indeed the sky is ablaze and a strong sulphur smell follows the next day. If you intend to sleep that night in Reykjavik, I suggest earplugs.

As with New Year‘s Eve and Christmas, there is plenty of folklore connected with the Thirteenth, cows are said to be able to speak on that night, elves move places, seals take off their hides and assume human form, and there is the classic lore of the crossroads, if one sits there for a whole night, not speaking to anybody no matter what, good fortune will smile on one. It should be noted that the extent that people today actually believe these stories is debatable, it is actually no more than is common elsewhere in Europe, though believers here may be more outspoken, but primarily the stories are entertaining.

My own new year was a really nice one, spent with my parents, my brother, his life partner, their children and her family. We had duck and other delicacies and watched the yearly satirical TV show Skaupið. The quality of each year‘s Skaup is a matter of much discussion with Icelanders, and most often people will have an opinion on it, as most of them watch it. Personally I was happy with this year‘s Skaup, it may have been less satirizing politicians and more just Icelanders in general and that is fine by me, a hearty laugh at oneself is a healthy thing, in my opinion. As the new year set in, we toasted in champagne that we actually opened with my brother‘s sword. ‘Cause that‘s how we roll.

I was particularly surprised at how deep my little niece could sleep, though falling asleep wasn‘t easy, despite good effort. I must have sang about eight lullabies for her. She‘s a dear. I also decided to hum the traditional vikivaki dance song Ólafur Liljurós for her, about the Christian hero Ólafur the Lily-Rose, whom four elven maidens try to seduce, but when he refuses to join them for some steamy elven lovin‘, one of them fetches a sharp knife, and tricks him in to kissing her (the song expressly states that Ólafur did this very half-heartedly, but that is open for debate...) and then stabs him. He rides home and is cared for by his mother and sister, but dies from his wounds, unhappily ever after, a short while later.

I know, I am an excellent role model and available for children‘s parties, weddings and bar mitzvas. To be fair, though, I hummed the song very slowly and whispery as she was as good as asleep and had only reached the point of the tale where the elven maiden goes to the woods to fetch the knife. Despite roaring fireworks, my niece slept soundly and didn‘t wake up once, so I consider my mission a success.

As for us grown ups, we chatted on until we realised in was about four in the night. We called it a night then, as indeed it was, and an excellent one at that.

I do wish you all a very happy new year, with peace and well-being. May you live long and prosper and the force be with you. I‘ll finish up this entry with the same song that I shared with readers of this blog last year, simply because I love it and this rendition is so good. This is Scottish troubadour Dougie McLean performing Auld Lang Syne:

Photo courtesy of Iurie Belegurchi. For more of his excellent pictures, check his webpage.