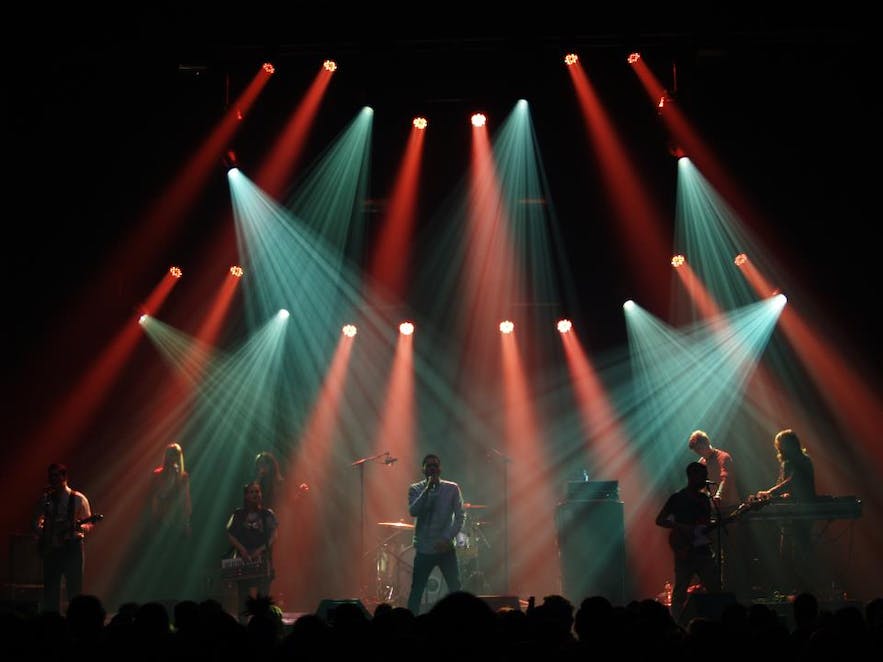 The international Sonar festival was held for the first time in Reykjavik this year. I got a press pass and am happy to write about my experience of the festival where I had altogether a really great time, and those bands I got around to see.

Internationally, the festival is mainly focused on electronic music and interesting homegrown talent in the city where it's celebrated. Mashups with other artistic forms are also common, though the Reykjavik festival solely focused on music. The festival was held in Harpa in four rooms plus a stage on the first floor, near the windows and called the Bay Area, as well as a stage in the cellar, called the SonarLab.

After a nice dinner with my coworkers, and celebrating that Guide to Iceland won the Nexpo award as the webpage of 2012, I went to Harpa to enjoy the show.

I started the evening attending the Bloodgroup concert in the Bay View Area. The atmosphere was chilled and most people were sitting either in chairs or on the floor. Singer Sunna I thought was particularly good, with a nice voice and a passionate delivery. I liked their moody melodies, ballads and beats quite a lot,  and though they experiment sonically they still retain a pop sensibility.

Here's the song Fall by the band, from their latest album:

With their funky, catchy and soulful alternative pop, Retro Stefson, pictured in the photo above, are constantly sure do deliver a great concert and this time was no exception. They thus had the whole crowd dancing in no time. Retro Stefson are currently being nominated for five Icelandic music awards under pop/rock:Songwriter of the year, song of the year, singer of the year, performer of the year and album of the year. So, yeah, they don’t completely suck and are worthy contenders. As a matter of fact, they rather kick ass.

Here is a great song by the band:

Trentemøller ended the night with a great DJ set, killer beats and grooves which had the whole crowd of Sónar Hall-Norðurljós dancing and swinging. The overall mood got rather sweaty by this point, ‘nice and sleazy’ as The Stranglers would have called it. A great end to a great night.