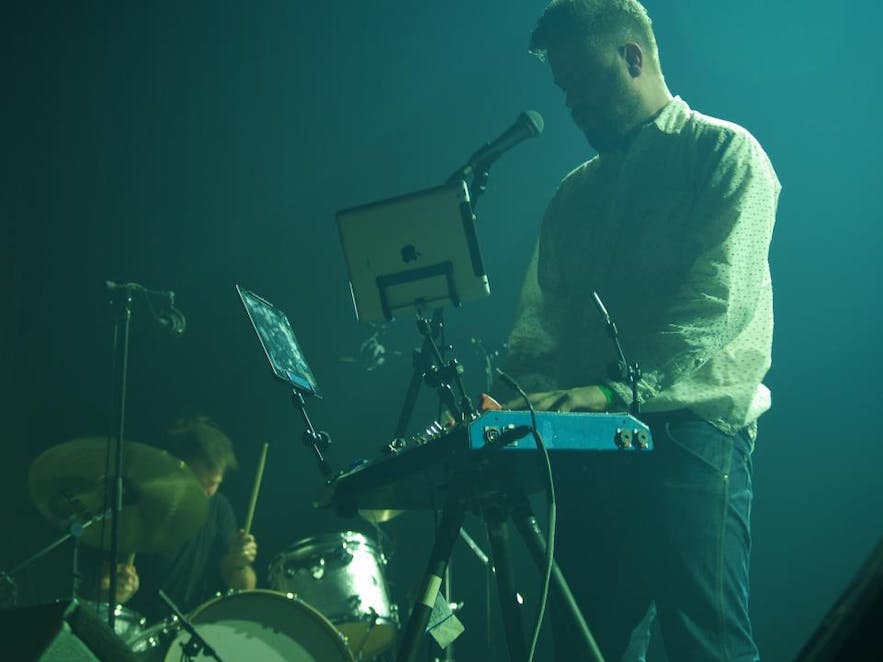 After a great night of partying the earlier day at the Sonar festival, I returned to Harpa for the second installment the following day. These are the bands I got around to see and my thoughts:

Samaris, consisting of Singer Jófríður Árnadóttir, clarinet player Áslaug Rún Magnúsdóttir and electronic musician Þórður Kári Stefánsson delivered a great set. The atmosphere was chilled out and the electronic instrument created a nice bass/beat backbone to the melodies of the clarinet. The music, which has been described as a sort of electronica/trip hop coupled with space, atmosphere and a bit of melancholia managed to be altogether quite sensual, as well as etheral, groovy and dreamy. It had some ambient feel as well as retaining a good pop sensibility. I liked Jófríður’s voice a lot and she also did great vocal stylings  She used echo quite a bit, which was effective and fit the music well. In their last song, the vocal melody kind of reminded be of an old rhyme or chant, what we call ‘stemma’ (singlular, ‘stemmur’ in plural) which I found very attractive. I think it was Góða tungl, posted below, where I know that the lyrics are from a folk rhyme, but don’t know if the melody is as well.

The two girls’ costumes were interesting, sort of like from a 50’s sci-fi movie, wearing some sort of plastic bag,-dresses as well as the singer doing a strange kind of dance/movements. A bit quirky and Bjork-esque, but didn’t really affect me one way or the other, the music was great either which way. It was the kind of music that you could dance to (although perhaps rather more slowly, groovylike) but most people stood and were more tapping their heads  and feet. The few I did see dance went into a weird sort of trance/rave dance which was quite nice to behold.

Úlfur played the Bay Wiew Area and I fear the sound mix may not have been working in their favour,  which I felt was quite a shame, since I felt they had a good thing going behind that. Thing is, I'm not quite sure if the mixing was intentional on the behalf of the band or just had to do with the overall mixing/accoustics of the venue. I did notice weird sound mixing in some other halls as well, where, for example, you'd hear a markedly different sound by the door as opposed to inside, the bass maybe rather drowning out all the rest and such. So, it might have been that.

In any case, the sort of soundscape thing Úlfur had going rather drowned out the instruments. It may have been too much reverb and a weird sort of sound mixing. I actually rather liked their melodies and chords, which were quite pretty. I felt that with a better overall sound mixing I'd have enjoyed them much better. As it was, I got some nice tunes over a high-pitched sort of wail and massive reverb, which, frankly, got rather annoying. And this from a guy who blasts heavy metal regularly.

I enjoyed the two last songs best, where I felt I could better hear the instruments coming together. Their second song also managed to create nice harmonic sounds instrumentally. Their second-last one started with bird sounds, which I felt was a nice touch and helped with the atmosphere. Their harmonic intro was also great. I could better hear the guitar now and the Lady Jane-esque intsrumental sound on the last song (somewhere between a dulcimer and a hapsicord, I suppose) enriched that one further.

Hermigervill’s concert was rather more successful, in my opinion. He also played in the Bay View Area but I don’t remember any irritating sound problems there. With his great electronic sounds, remixes, irrestitable grooves and beats and a lively and energetic stage performance, Hermigervill got the whole crowd of the Bay Wiew Area dancing and his set was tons of fun. Especially great was his version of the classic song Sisi by Icelandic 80’s female new wave group Grylurnar (ca. 0:51-04:48 in the live video below, thanks to'imthehead' for uploading it).

If I was to use one word to describe Mugison (pictured in the photo above), it would be ‘versatile’. Another word would be ‘awesome’. So here is a simple confession, I- [insert swearword for emphasis]-ING LOVE-MUGISON.

Mugison’s music can be hard to sum up, as he has dabbled in blues/hard rock,  sometimes almost veering into metal territory, electronics, folk, pop, it’s groovy… it’s  catchy.. he has toyed around with elements and influences and served them up in a red-hot cocktail. His influences are wide and his music is varied, yet he always has that special Mugi-sound (notice the pun?). He has been described as ‘Tom Waits harmonising with Will Oldham, and all the vistas Beck is supposed to suggest shoot up’ (Time Out). He may alternatively rock your socks off, kook and quirk you (is that a word?) or melt your heart with beautiful melodies. He has a great directness, honesty and humor to him and reeks sheer odours of charisma. Not surprisingly, he is one of Iceland’s most beloved artists and his latest album got the Icelandic music award as best album, featuring the best song and the best lyrics.

In this particular concert, Mugi was awesome as always, here utilizing his ‘Mirstrument’, a homemade instrument he and friend Pall Einarsson made out of lots of controlers they had lying around.

While I didn’t recognize many of the songs, that didn’t stop his music from kicking mine and other asses, metaphorically speaking. As I expected he was simply awesome, star material in the best sense. His fellow players were great  as well, especially the thunderous drummer. Befittingly, the crowd loved the guys, though the greatest applause came when he delivered his classic songs I Want You from the Mugimama is this Monkeymusic album and the hauntingly beautiful Ljósvíkingur from his latest Haglél album. The whole crowd  (including yours truly) sang along with the latter. I thought that was beautiful.

Here are three exellent songs by Mugison, just to give you a taste of his music:

Make sure to also check out the excellent article on Mugison under the 'Icelandic Music' section on the Guide to Iceland page. Mugison's homepage, linked above, further allows you to listen to all his albums for free, though you'd do well in purchasing them, since they are awesome, and in so doing you'd also be supporting the good man.

Aside from the occasional irritation with the sound system, which I wasn’t always sure was intentional on the performer’s part or not, my only real quibble was with the price of beverages and the fact that there wasn’t really any food for sale that I could see, since I was reluctant to have to leave Harpa for a meal and decently priced ale. 1000 krónur for a beer? Bah, bloody highway robbery, hrmpf!

Leaving pet peeves aside, however, I had a great time and saw some excellent artists and bands give awesome performances and would be happy to go again to the next Sónar, hoping very much that this event will be will be repeated. For other highlights of the Reykjavik Sónar this year, I recommend this Guide to Iceland-article.

Finally, here’s an idea: If there’ll be another Sónar, why not get the excellent Apparat Organ Quartet to play? Actually, I was rather surprised that they weren’t playing.The Apparat Wikipedia page describes their  music quite aptly: ‘machine rock and roll’ and their sound  veering ‘between ‘pulsing floor-fillers and headbanging anthems, served with a mixture of Kraftwerk inspired electronics, Daft Punk-like robot voices, and hard rock beats’ and t’heir almost surreal melodies’ seeming to derive equally ‘from medieval Gregorian chant, American cartoons and Russian Romantic music of the 19th century’ and notes that the bandmembers 'play keyboards from their collection of jurassic analog machinery, including Russian synthesizers and customized home organs, Italian transistor organs from the 60's, malfunctioning Hammonds, old school vocoders and various circuit-bent Casios and Portasounds’.

The only thing that I really feel needs to be added here is that the band is great and particularly awesome in concert. They actually don’t use any computers or sequencing, everything is performed live. They have two albums out that are definatly worth checking out, their epinomyous album (2002) and Pólifónía (2012).

And finally, here’s a great live performance by the band at KEXP studio  in 2012.