Running in the Fire & Ice Ultra for the CFC research fund

My name is Gísli and I will be participating in the 2016 Fire & Ice Ultra Marathon, a 250K ultra marathon starting at Drekagil and ending at the Myvatn nature baths. I will be running in support of a charity, namely the CFC research fund. CFC is a rare genetic condition, it´s actually so rare that there have only 300 people in the world been diagnosed...in history. By supporting this charity, it will enable the beneficiaries to fund research into this condition allowing us to better understand it and hopefully provide the means to enhance the quality of life of those individuals that are affected by it. The reason I'm running for the CFC research fund is because of a young friend of mine called Breki, who is one of only two people in Iceland to have been diagnosed with CFC.

The Fire & Ice Ultra will begin on monday the 28th of August and I will update this page on a daily basis during the run. This will be the third time that I participate and all three time I have run with my father (he usually claims to be my younger brother during the race).

In collaboration with Guide to Iceland you can support the CFC research fund by submitting your donations through by filling out this form, for those who would like to use a credit card. A payment request will be sent once the race has run its course.

For people based in Iceland that would like to make a direct money transfer, you can do that with the following details:

I will be running this race in ketosis, at least I think I will (I did not take a blood sample before I left). You might be wondering what the hell ketosis is, so I´ll borrow this definition from Dr. Peter Attia: "Ketosis is a state, achieved through significant reduction of carbohydrate intake (typically to less than 50 grams per day), at which point the body makes a fundamental change from relying on glycogen as its main source of energy to relying on fat as the primary source of energy.  In particular, the brain shifts from being entirely dependent on glucose, to being primarily dependent on beta-hydroxybutyrate – a so-called “ketone body.”  Ketone bodies are chemical structures made by the liver (also somewhat in the kidney) out of fatty acids, primarily."

That is a photo of my food that I will be eating over the next 6 days.

Arrived at Dreki in the rain. Hopefully dry tomorrow. 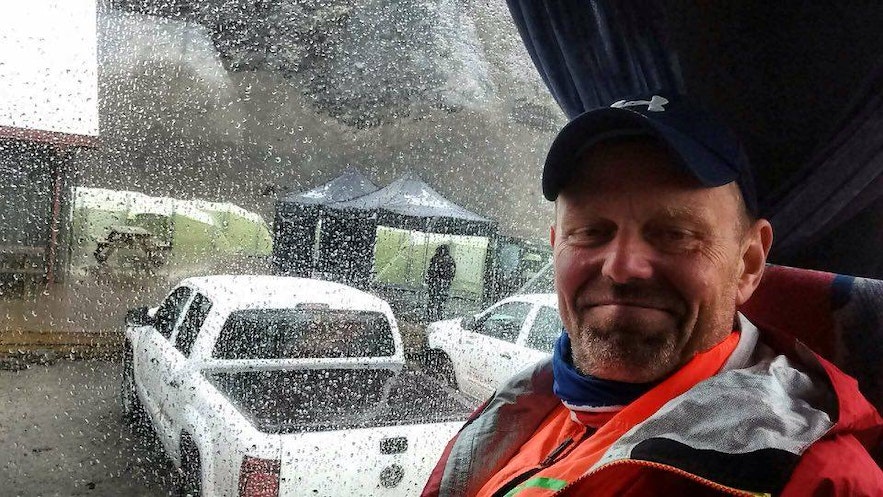 Drekagil is an amazing place. 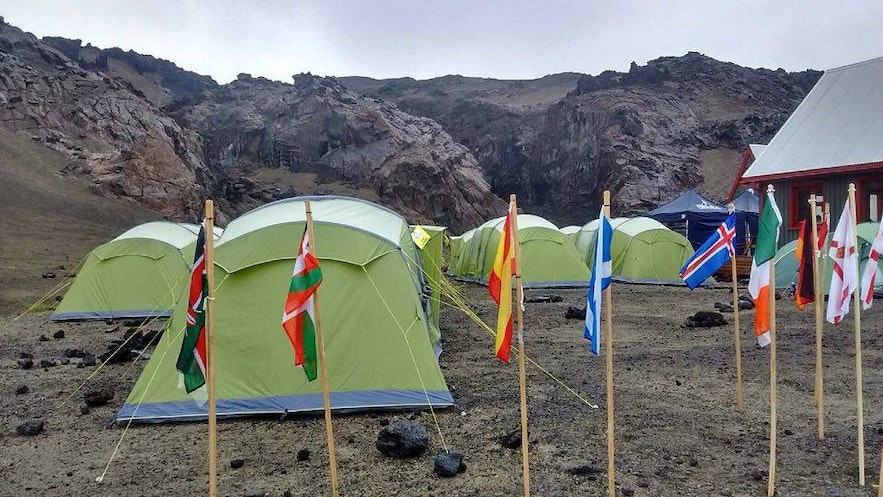 Today was 35,3 km through the beautiful Holuhraun region with Bárðabunga. Had backpack problems and some problem with nausea. Finished at 4:26. 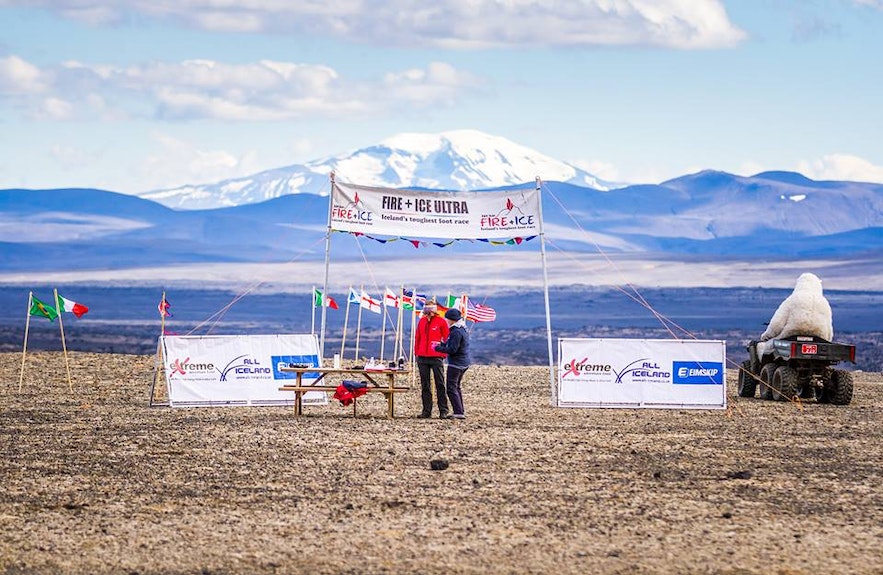 From Dreki, around Herðubreið and finish in Herðubreiðarlindir. 42 km in total. Very rocky trail but epic scenery. Feeling good.

The long stage. 65 km ending in Hrossaborg (known for the Metlife stadium shot in the film Oblivion. Wind and rain, number of people drop out. In my tent, trying to get the rattling out of my bone.

The weather is totally different today and spirits are up. 49 km today taking with an amazing stop at Dettifoss. 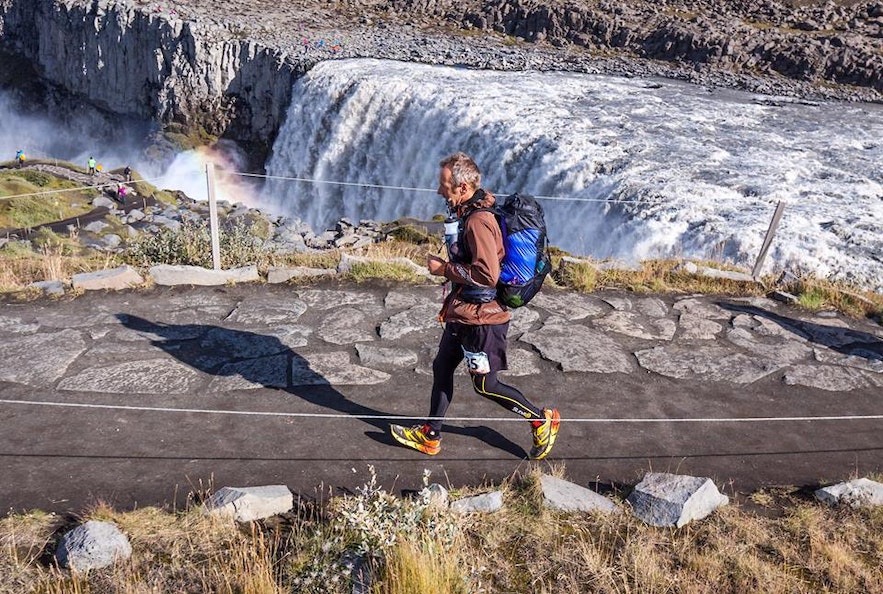 Last night we camped at an amazing place called Péturskirja. It was a cold night but the benefit was that the competitors got to experience some amazing northern lights. In the morning it was a bit frosty but the beautiful weather during the whole day. I got through the day despite an injured leg and finished the 29 km course. The course ended in the Nature Baths in Myvatn so everybody got a huge reward at the end of the day...a shower and bath. 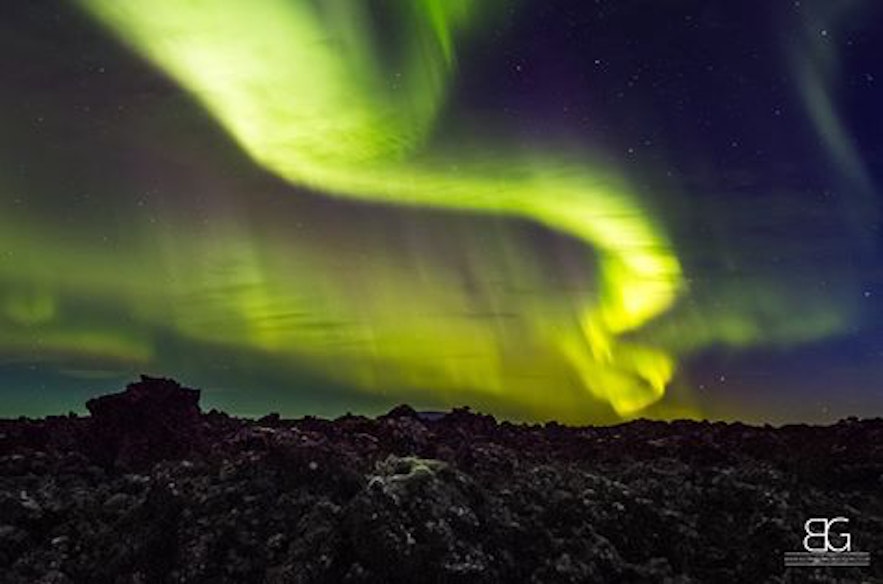 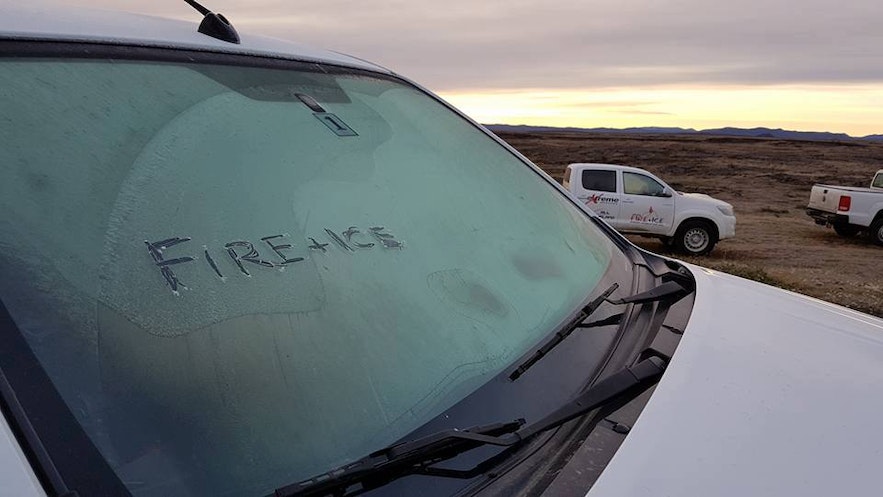 Last day. A short 26 km from the Nature baths in a circle, thus ending back there. The course ends with a steep climb up Hverfell, a crater that is 1.000 meters in diameter.

18th place is the final rank, which I am pretty happy about. My old man came in 7 minutes behind me in the 19th place, pretty impressive for an old guy.

Everytime I do this, I am absolutely awestruck by the beauty of this area of Iceland. 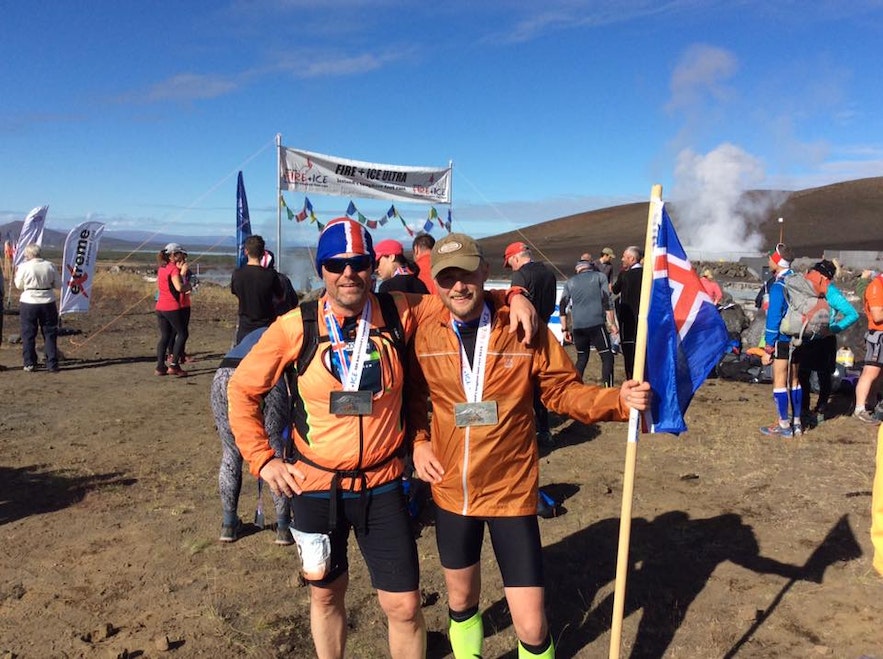 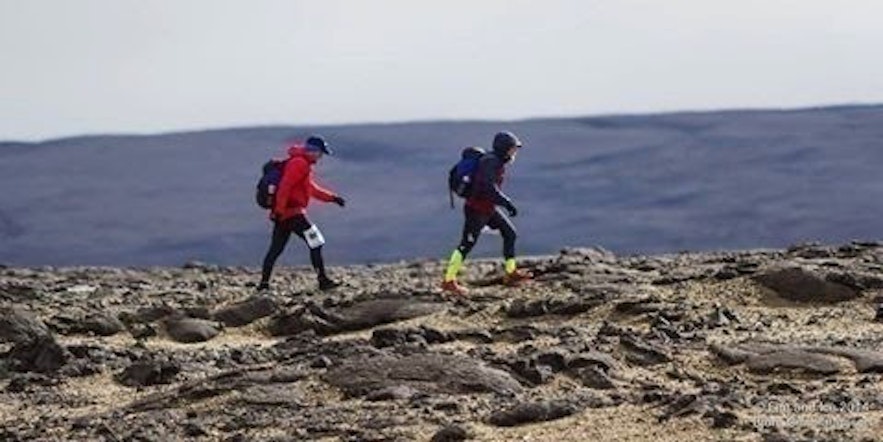 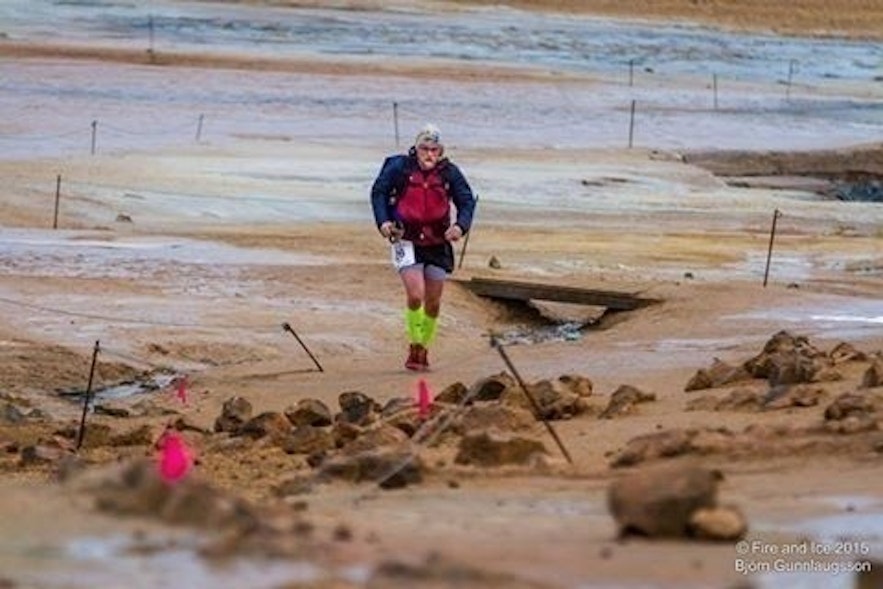 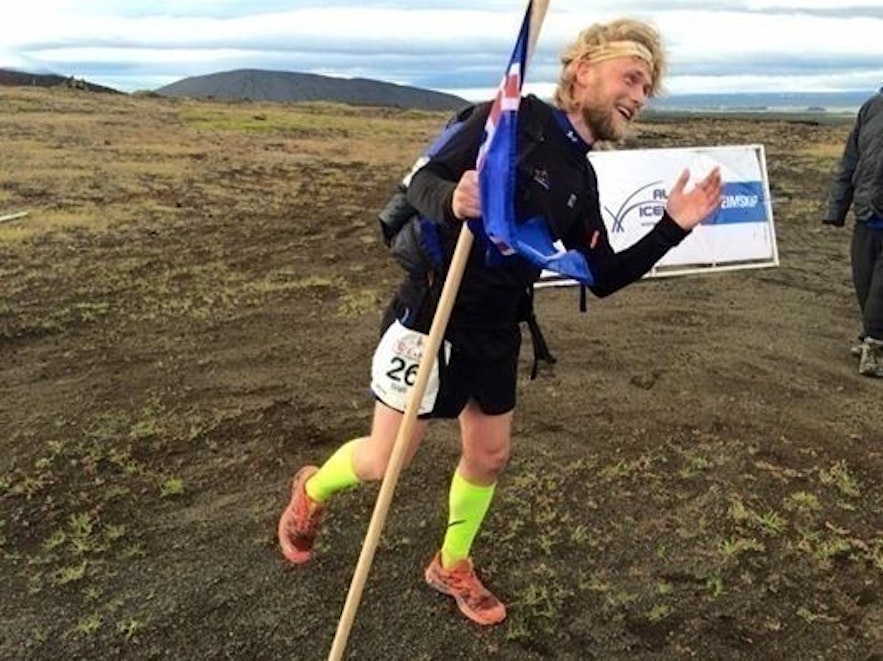 The Fire & Ice Ultra Marathon is an annual event in which participant complete a 250K course in 6 days, running through the Icelandic highlands in the last week of august. This years event will be the fifth time the event will be held and 75 people will participate this time around, a record number.

The aim of the Research fund is to develop a cure for the Cardio-Facio-Cutaneous syndrome. There are only two Icelandic individuals diagnosed with CFC syndrome: Breki (12 year old) and Eydís Diljá (3 year old). There are around 300 individuals worldwide with confirmed diagnosis. CFC syndrome is a rare genetic condition that typically affects the heart (cardio-), facial features (facio-) and skin (cutaneous). Individuals with CFC syndrome have certain features such as relatively large head size, down-slanting eyes, sparse eyebrows, curly hair, areas of thickened or scaly skin, and short stature. They a have some degree of learning difficulty and developmental delay.

About Guide to Iceland

Guide to Iceland is the largest collaboration in the Icelandic travel industry. Our partnership consists of more than 500 travel companies and individuals in Iceland.

What unites us is that we have all agreed to provide travelers with the best possible time, services and prices available in Iceland. Our main goal is to quality control services to provide you with the best experience. We make sure that you always receive a quality service in Iceland with fair terms.