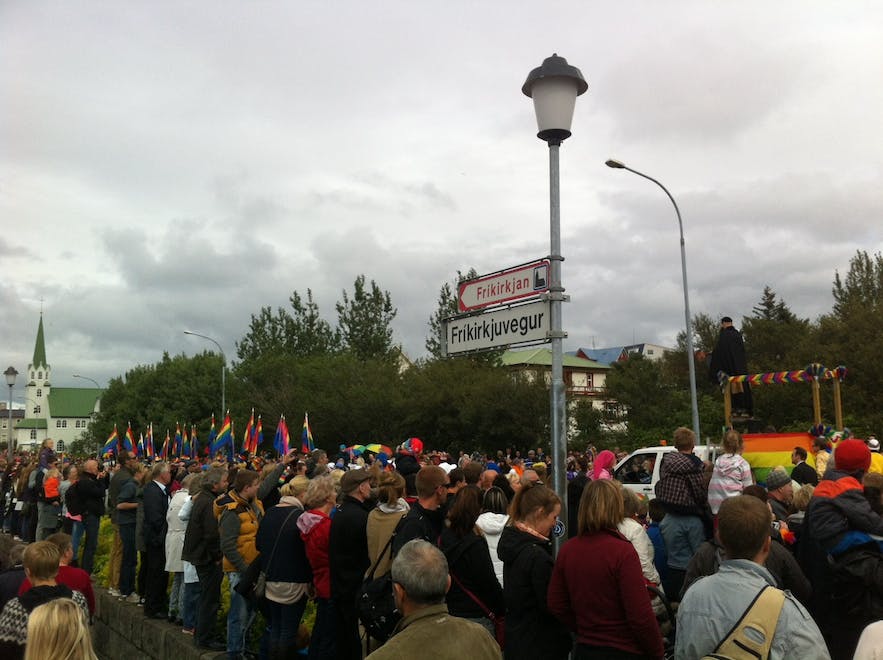 Only in Iceland is Gay Pride weekend a family event, a celebration lasting 4 days, boasting the heterosexual mayor of Reykjavik as the gay pride parade drag queen.

Well, he was the drag queen once already, so this year he came dressed as a traditional Icelandic woman in 18th/19th Century costume throwing red roses at the audience. The two Hummers from Kiki's Queer bar rounded up the parade, which ended at the steps of Arnarholl. The only man I´ve ever lived with beside my father is my gay, German roomate of 4 years, and he was driving in the parade. One of my lesbain horseguiding friends drove her motorcycle front and center with a cute girl on her back. The paraders included anybody and everybody in rainbow coloured clothes, and though it didn´t matter what size, age or colour you were, today was one of the only times you feel abnormal (or atleast uncool) for being straight.

A 5 year old boy asked his mother who was celebrating Gay Pride, and she said "There are some women who love women, some men who love men, and some women who want to become men and some men who change to women." The 5 year old understood the first two kinds of people, but couldn't quite wrap his head around the trans-gender concept... When his best friend met him later, the 5 year old stared at him quite seriously, and finally turned to his mother and said "but mom, I dont want my best friend to become a girl." Then his mom had to explain that she would always be a woman and his best friend a male, and that coming to the celebration didn't mean you had to be LGBT.

Gay Pride in Reykjavik is basically a time for the crazies and queers to come out, party alongside the young and old, the straight and asexual, to celebrate love and legal marriage for all. Its a time when the public display of affection is not only ok, but advocated, and political protests in favour of gender equality are rampant. So, cheers, to all the lesbian, gay, bisexual and transgenders around the world, with love from Iceland!