Who said Greek mythology was any better than Norse Mythology? The Vikings wrote about some bad ass Norse gods in the Icelandic Eddas and Sagas, and heres a list of the coolest Nordic gods and goddesses and the myths that made them famous.

Arguably the most famous, Thor is the brutish god of Thunder and lightning. He´s depicted as a powerful, protective, defensive warrior, sometimes seen as the most important of all gods, and related to the ideas of Hercules and Jupiter from Latin sources. He carries his hammer Mjölnir and wears his all-mighty belt Megingjörð to overcome all evil and misbehaving giants. 25% of Icelandic settlers in the 10th century had the root ´Þór´ in their name, as well as many place names and farms being christened to Þór. Pictures and statues of red-bearded Thor with his hammer have sometimes been interpreted as him holding a cross, allowing him to be saint like and respectable by Christianized Iceland after the year 1000, but we will never erase the pagan images of him riding through the giant world with a chariot pulled by goats, creating stars from Aurvandil´s toe,  and fishing the world-encircling serpent Jörmungand from midgard with the head of an ox. 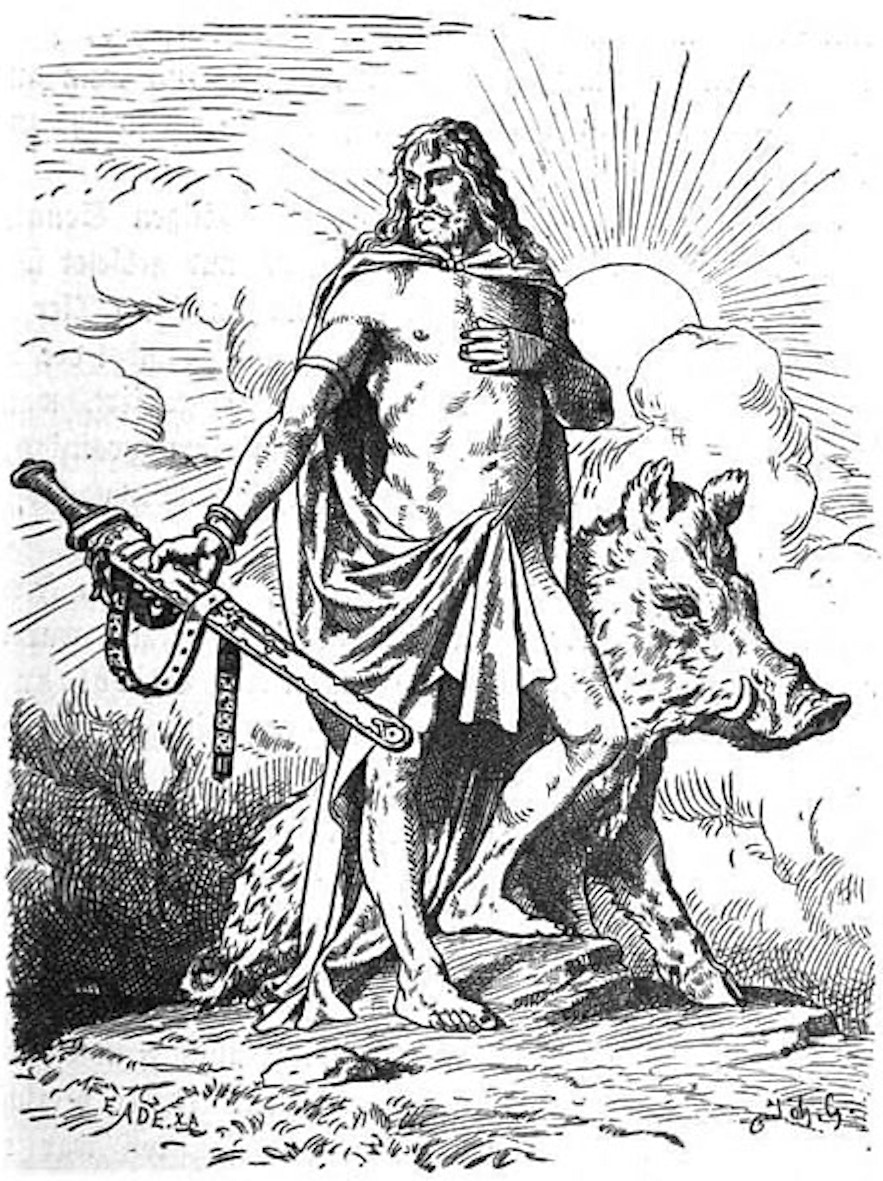 Another one of the key gods in Norse paganism, Freyr is considered a fertility god, and one of the founding fathers of the Swedish Royal Hourse in Snorri´s euhemerized version of Nordic god geneology. He´s the brother of Freyja, son of the sea god Njörðr, and comes from the Vanir class of gods.  He rides a shiny boar pig and sails a supernatural ship that can fold into your pocket, and is known to be the best horse back rider of the gods with his horse Bloðughofi, 'Bloody-Hooved.' He yields a  magical sword which is capable of fighting on its own, and falls in love with the giantess Gerðr before dying to Surtr, fire itself, after fighting swordless in Ragnarok (the doom of the world). Though this wild-animal riding god (who was apparently pretty well endowed, if you know what I mean ladies) seems to be the most fanciable, keep in mind that Baldur was the most beautiful of the gods. He was married to the goddess Nanna.

This guy is a wild, drunken, horny, shape-changing, traveling wanderer, who recites poetry and seduces women to gain knowledge. He takes all who die from battle into Valhalla, the hall of the dead, and wears a blue cloak and a hat that covers one of his eyes to make him seem a little pirate like. His staff or spear is also always with him, and he has 2 pet ravens called 'Thought' and 'Memory´, and historians wrote about him as a creepy old wizard man who rides an 8 legged horse called Sleipnir. He sounds pretty sketchy to me... but how cool to have a horse with 8 legs!

She´s kind of like the female version of Odin, a little slutty, super independent, and a doer of black magic. She´s the wife of a lost, wondering man, which some have assumed to be Odin, which means she is the same goddess as Frigg, the wife of  Óðinn. She has a beautiful golden necklace called Brisingamen, and wears a bird costume once in a while. She takes the dead who Odinn doesn't want, the ones who don't die as courageous warriors. She also likes boars like Freyr, and has her own wild pig named Hildisvín, and rides in a carriage pulled by cats. If that doesn't make her a crazy cat lady, then I don´t know what would...

Sif is the blonde and shiny haired wife of Thor, considered the goddess of fertility and harvest. She has long beautiful hair that´s cut off in a nasty prank by Loki, the mischievous half God, and he gets her hair re-made by elves from strands of gold as thin and numerous as the hairs from her head. I never understood why I was named Katrin Sif, since I was born a brunette, but my hair is pretty shiny and I like corn, so I guess if I'm fertile enough, I and Sif could be friends.

This is, by no means, an exhaustive list, since many important gods and goddesses are missing, but I'm hoping my colleagues and specialists from the University of Iceland can help fill in the gaps. After studying these gods and goddesses all week, preparing for an Old Norse Religion exam, I can't seem to stop having dreams about folding sail boats, images of hairy, shiny pigs, hopes of racing an 8 legged horse, or fear of becoming a crazy cat lady with my own cat wagon when I get old. It´s a crazy life for the student of Norse mythology... and somehow I worry that I'm getting more stupid, not smarter, with the blurring boundaries of fiction and reality in my ´academic´ studies.

Who is your favourite Norse God or Goddess ?