Northern Lights tip 3: How to Forecast an Aurora

Good evening ladies and gentlemen and let us start immediately with the third instalment of our practical Northern Lights tips: How to forecast an Aurora?

Well, you cannot really, but there are several useful tools you can use to give you a general idea about the likelihood of seeing the Lights on a particular night.

These tools are, basically, solar activity reports. The sun is, as we have established it earlier on, the source of all Northern (and Southern) Lights and an increased solar activity can mean exceptionally strong Northern Lights. Solar activity can be forecast and studied in longer and shorter term and using some specific tools and that's what we will be looking at right now.

It is actually quite easy to get an idea of the intensity of the sun by looking at how active it had been in the past days or weeks. If you look at the graph down below you will see what I mean. 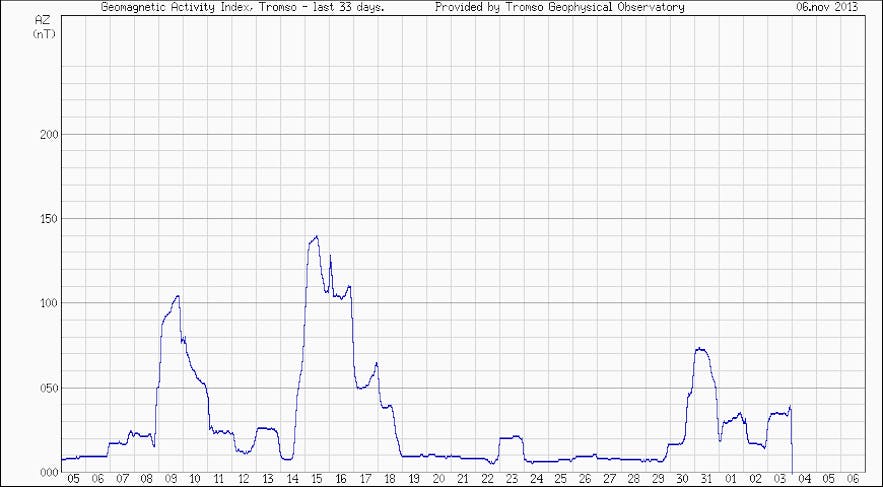 On the left part of the graph, you can see the visualization of two peeks of solar activity, both being quite comparable in intensity, length and general development. Indeed, most of the time, the solar activity will rise and fall in a somewhat semi-regular pattern (note the extensive use of the conditional tense in this sentence). Generally, a burst in solar activity will result in two/three nights of good Northern Lights and then reach a very low level when Northern Lights are much weaker (if they are to be seen at all).

One thing that is hard (impossible?) to forecast though, is the intensity of any given burst. If you go back to the graph, you will see that after the second burst, a third one happened, but that it was much weaker than the previous two, right? Basically, this later burst was to be expected, but no-one could have forecast how it would fare compared with the previous ones. To get further hindsight on the strength of any given burst, one will have to use other devices.

When you're still wondering about going out in search of the lights, please consider the following northern lights forecasts: 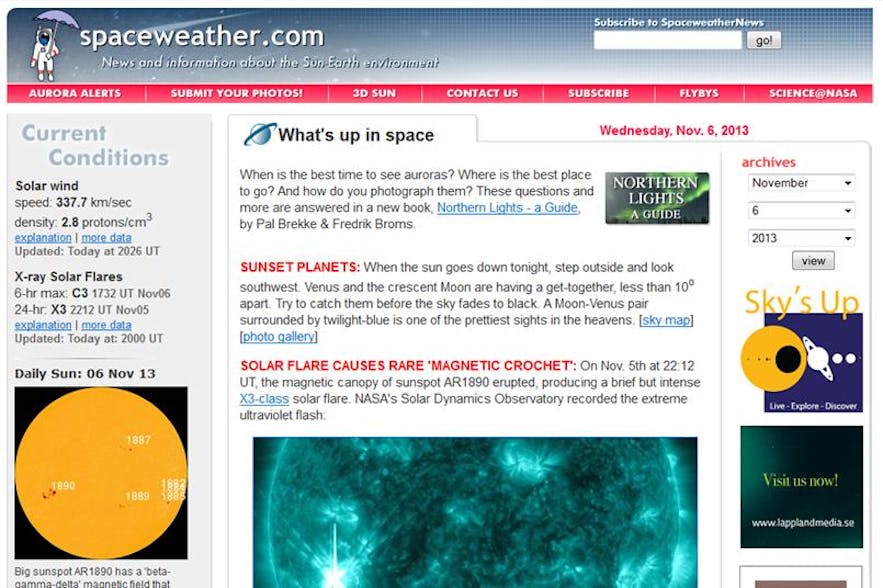 Spaceweather is like the internet Bible of the Northern-Lights hunter. the website monitors solar activity in real time and offer scientifically-sound information on the nearest solar flares. What is great with spaceweather is especially that they tend to post using understandable language. There are indeed a great many websites dedicated to monitor solar activity but spaceweather is definitely the best for all but the Phds in Physics.

It only suffices to access the website and you will be briefed on the latest solar flares and storms and the approximate time these will encounter the Earth. In addition, the website has a section dedicated to Northern Lights photography where you can compare the sighting of the Lights all over the North for any given day. 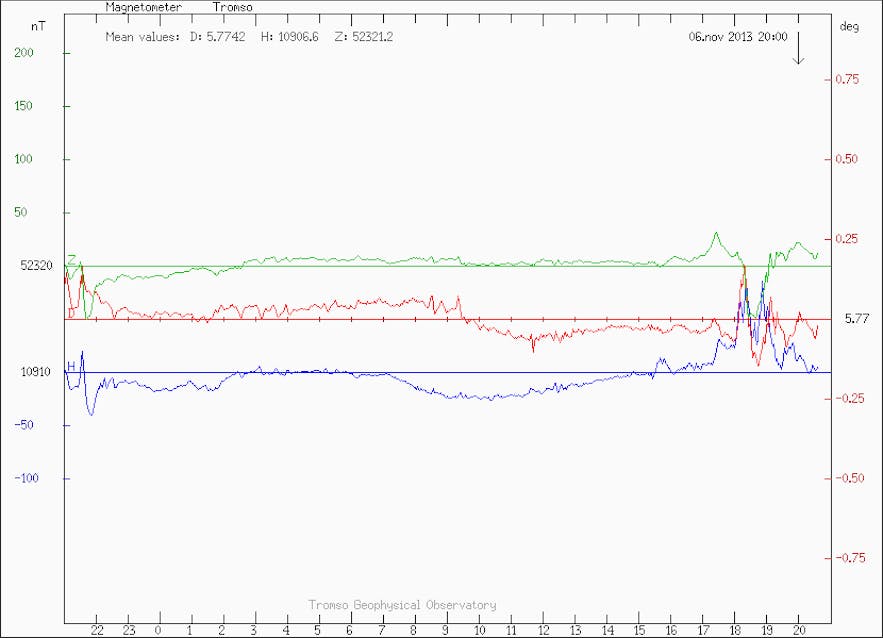 For even shorter-term alerts though, it´s back to Tromso University Geophysical Institute that one should go. The graph you see just above these words give you, if not real-time, at least very short-term readings on Solar activity. Most of the time, you will get information on the activity of the Sun an hour or so ago.

On this chart, flat = nothing and peek = Northern Lights. As you see on this screen capture, it looks quite good for tonight, but again, it´s almost impossible to know how long an ongoing burst will last, but as a rule of thumb, if you have a very flat graph during the day and that it starts going up (or down) during the evening that generally mean that something is going on.

The Aurora forecast of the Kho Observatory

In addition to space weather and virtualtromso, I sometimes make use of KHO observatory. 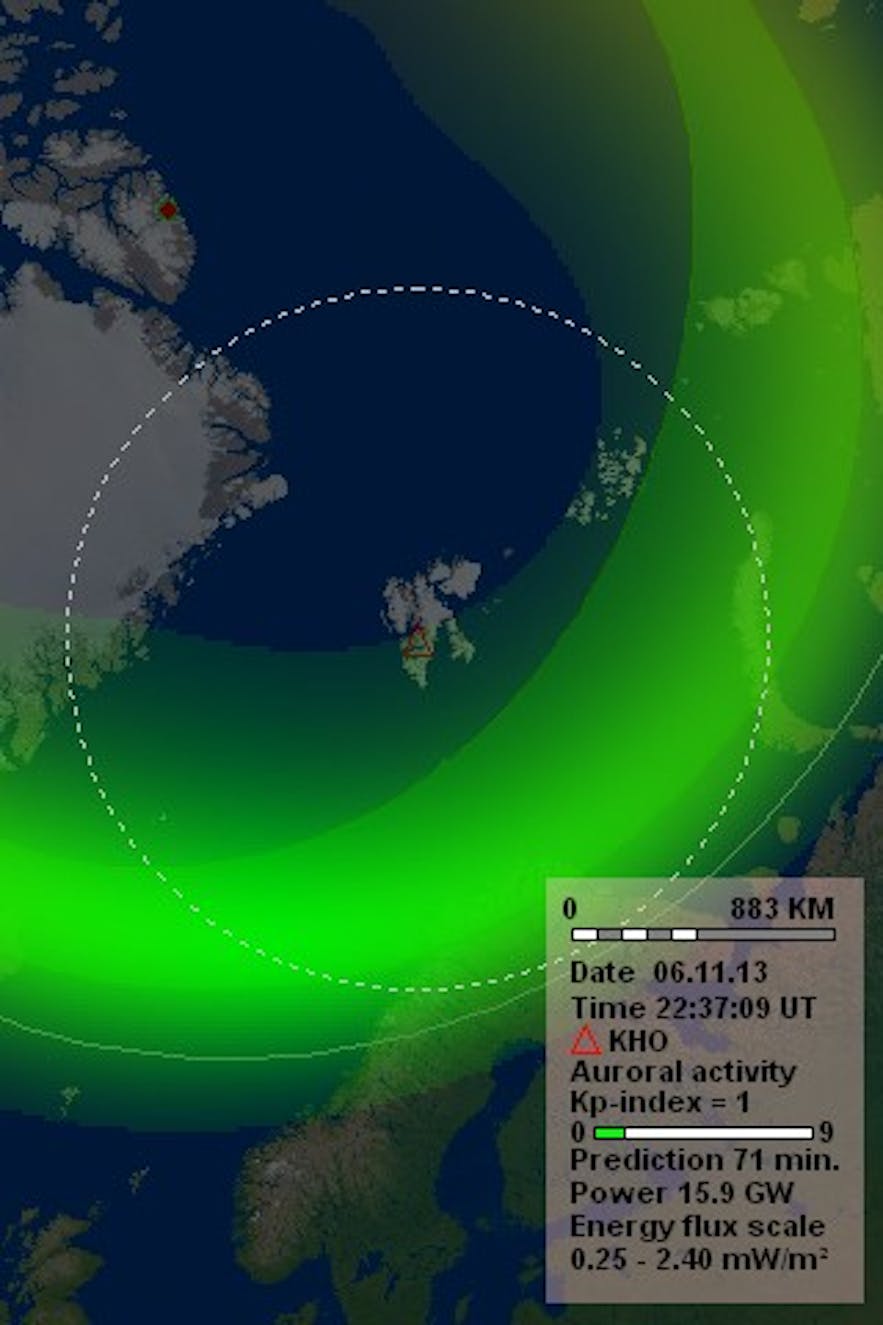 This website, monitored from the remote archipelago of Svalbard by half a dozen courageous Norwegians gives you both an updated estimate of the size of the Northern Lights Belt and a scale of solar activity.

Kho is basically the most receptive of all solar stations as it updates its info every 30 minutes. Again, they "only" offer readings the past thirty minutes but this is overall a very trustworthy source of information. Also, regarding its scale, don't panic if you see the number stuck on the lower digits: 1 is actually the average level of Solar activity (0 is however, quite bad) and everything above 3 tends to be quite strong. with a 7, you might even get to see the lights in as southerly places as the Northern parts of the lower 48 states or England. 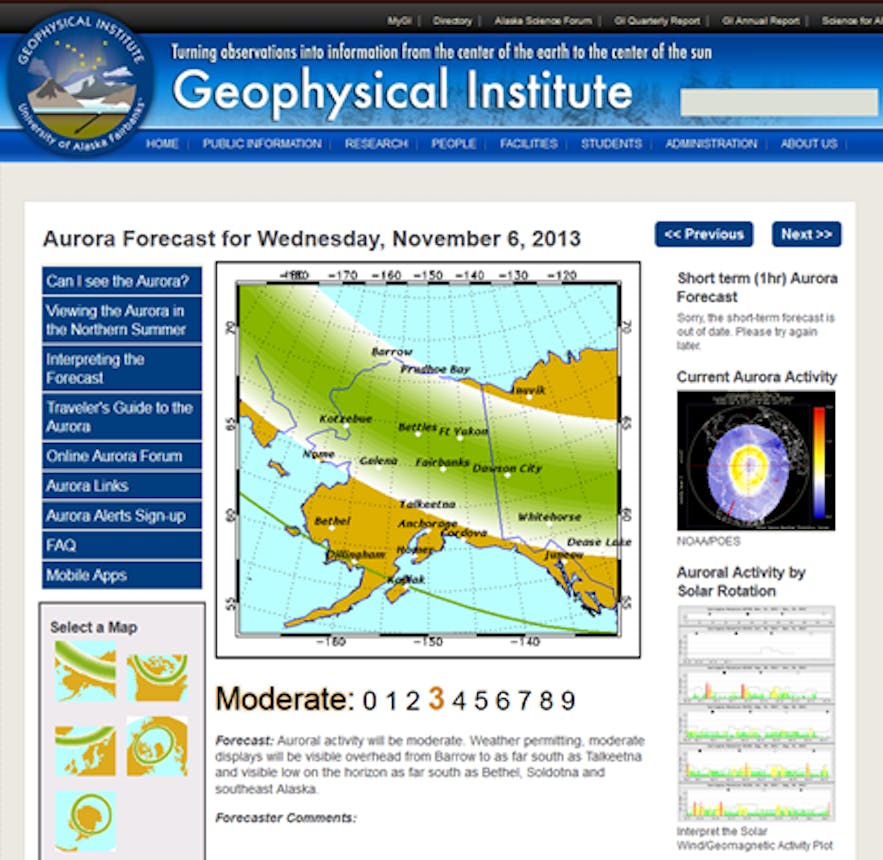 The Geophysical Institute of Alaska is basically an American counterpart to Kho. It offers the same kind of information (Northern Light Belt + current strength) but has just a bit less impressive maps.

The only other actual difference is that the notation system of the institute tends to always be one step higher than its Norwegian counterparts. Besides that, it´s a fine website.

Well, that was quite the lengthy post and I do believe that we covered pretty much everything the avid Northern Light hunter needs to know to decide whether to go on a  hunt or not. Tomorrow we will talk about another important factor to take into consideration: the weather.