Northern Lights Tip 4: How to Deal with the Weather 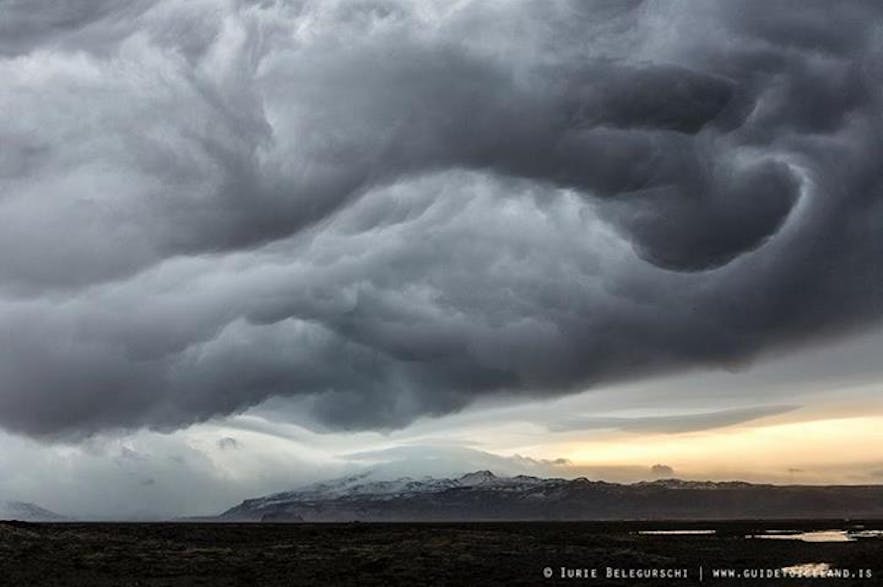 Okay Folks, we´ve already learned when, where and in which conditions we have the greatest chances to see the Lights.

There´s just one last factor to be preoccupied with right now and that´s a personal favorite (lies) of mine: The Weather !

Please take not of the use of the word preoccupied because it really is the weather that can (and does!) decide on the outcome of a Hunt. When a Northern Lights Hunter stops to look at the skies, nine times out of ten it won't be to determine if there´s an Aurora happening but rather to find an opening in the clouds.

In fact, once you're in winter, up North and have a decent amount of solar particles out, seeing the Lights gets very easy. Sadly, most of the time it won't be like that, and the hunt will be more about finding clear skies than the Aurora itself.

The reason? Well, it´s dead simple: Northern Lights appear quite high in the atmosphere (at around 100 Kilometers -or 60 miles- ) while clouds generally hoover over our heads at just a fraction of that distance. thus, you can have some super strong Northern Lights going on in the magnetosphere, but if there´re clouds between you and them you might well not even realize they are there.

It is therefore extremely important to be able to read not only a Northern Lights forecast (you´ve already learned it there) but also the plain old weather report.

Your best friend in this life-threatening virtual quest of yours will be, if you´re in Iceland, Veður, and if you´re in Scandinavia, Yr.no. 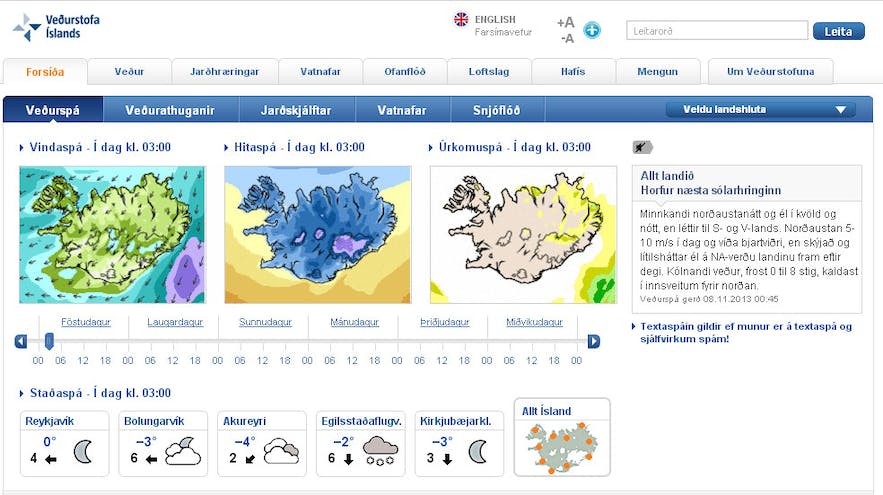 When entering Veður.is, you will, quite logically, be met with an Icelandic-language website. Just click on the British flag on the upper right part of the screen and you´ll magically become able to read this harsh language! after that, just go  on the upper left menu and search for "Weather". That being done, loo on the column on the left and click on "Cloud Cover Forecast" . Now, you should be able to select a time-period for the next five days. Just scroll on the graph to check what the weather will be at night time. The info thus conveyed should be enough to give you a good picture of the likelihood to get clear skies. 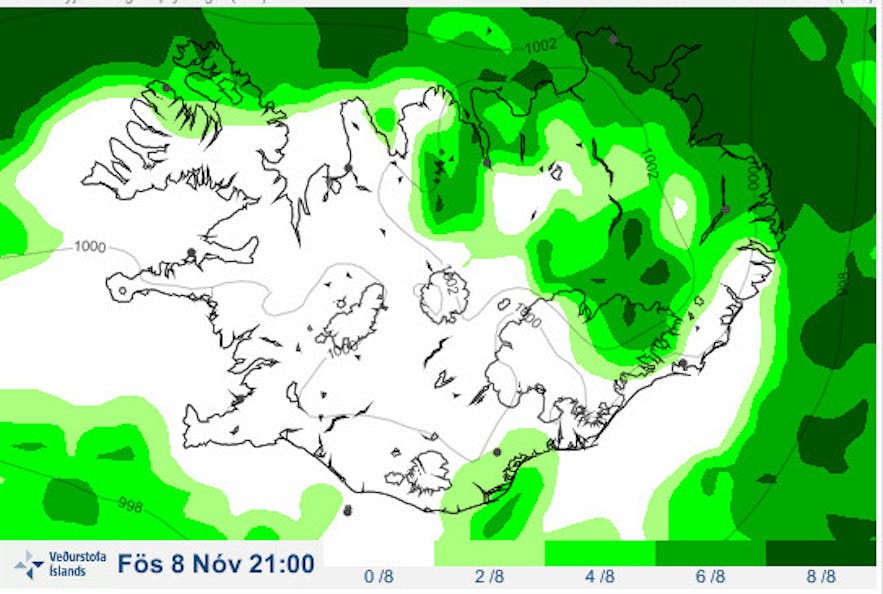 With a  reading such as this one (white equals clear skies and green, clouds), you should not fear too much for the cloud covering. if the weather stays like that, you have reasonable chances of seeing the Lights, congrats ! 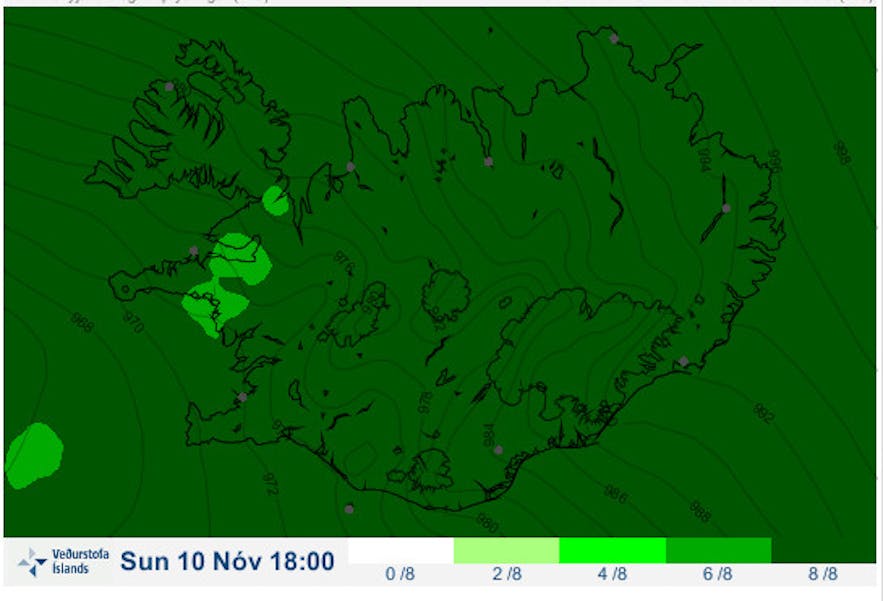 In the case below however, you´d be advised not to place your hope to high (or anywhere for that matter). Most tour operators would, in an y cases, cancel the evening´s tour if faced with really hopeless forecast. In such a situation, go hit the bars or something instead!

Again, these are just mere examples. It often won't be that black and white (or green and white, haha !) and you will have to use your wits and your guts to make a decision. If you really don't know, just call your tour operator and ask them how they´re feeling. They will most often be real honest and give you the best piece of available advice. 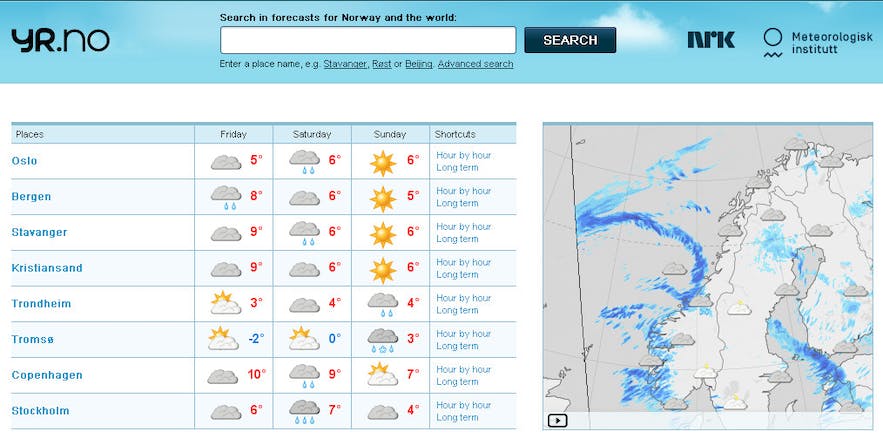 For those who might want to try out your luck in mainland Scandinavia, the website to watch for is the Norwegian meteorological office, the glorious Yr.no !

Entering Yr, you should automatically be redirected to a English-language menu (you can go back to Norwegian if you want, or even Finnish or Sámi if you´re curious) and be faced with two options: on the search bar in the upper part of the screen, you can type the name of any city, village, hamlet and farm in the country (and the world too, if you limit yourself to the bigger places) and get both a long-term, a short term, and an hour-by-hour forecast including both temperature, precipitation and cloud covering.

The second tool of your choice is the maps, on  the right part of the screen. By clicking on it, you will be met by a real-time visualization of the cloud covering over the whole North (from the Shetland to Estonia). you can zoom real close and check out the visualized hour-by-hour forecast over a specific region for the next days. This software is of course not perfect but it is a formidable tool in the hand of the wary Northern Lights Hunter. 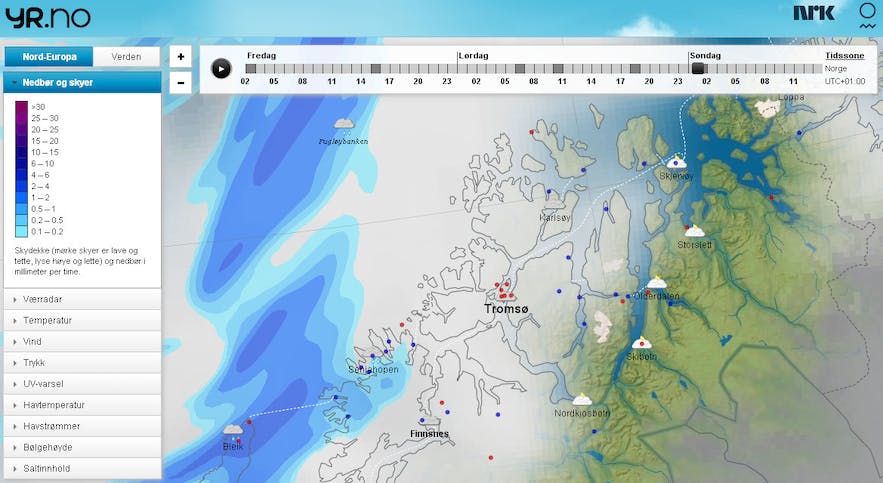 So yes, basically, regardless where you are, you should really take a look at these websites (the basic features of Yr work quite fine worldwide, Iceland included); these will help you making an informed decision when it comes to Northern Lights hunting. Combine that with the Northern Lights Forecast (tutorial available there) and you should be able to select the best night or nights for you Aurora-Hunting venture.

This will I think, prove to a be good enough conclusion for this already lengthy post. The next one will focus on another, slightly less texchnical aspect of the art of Northern Lights Hunting, namely choosing the tour that corerspond the best to your needs. Until that, good night.