Given my longstanding soft-spot for unruly hairstyles, corduroy trousers and acoustic instruments, I was understandably excited to attend the final evening of 2017’s Reykjavik Folk Festival.

Privately, I hoped that I might, for one reason or another, be adopted into this ragtag group of musicians, artists and performers; my mind was filled with images of on-the-bar jigging, dusty worn fedoras, thin french cigarettes, ashed carelessly inside. What I found instead was a very dignified, self-confident group of performers whose dedication to and practise in Icelandic folk music was a truly awe-inspiring spectacle.

Perhaps I was a little right to be surprised, with my last dalliance into the folk scene coming up short. Many years ago, in my formative years, I saw a weathered Bob Dylan performing his latest album at the AMI Stadium in Christchurch, NZ. At 17, I was a disciple of Dylan’s cultural legacy, his anti-establishment rhetoric, his pleas for societal compassion and collective understanding. However, the concert turned out to be a disappointment. Dylan kept his back turned to the audience, refused to speak during song breaks and played the guitar only once, on his finisher, All Along The Watchtower. 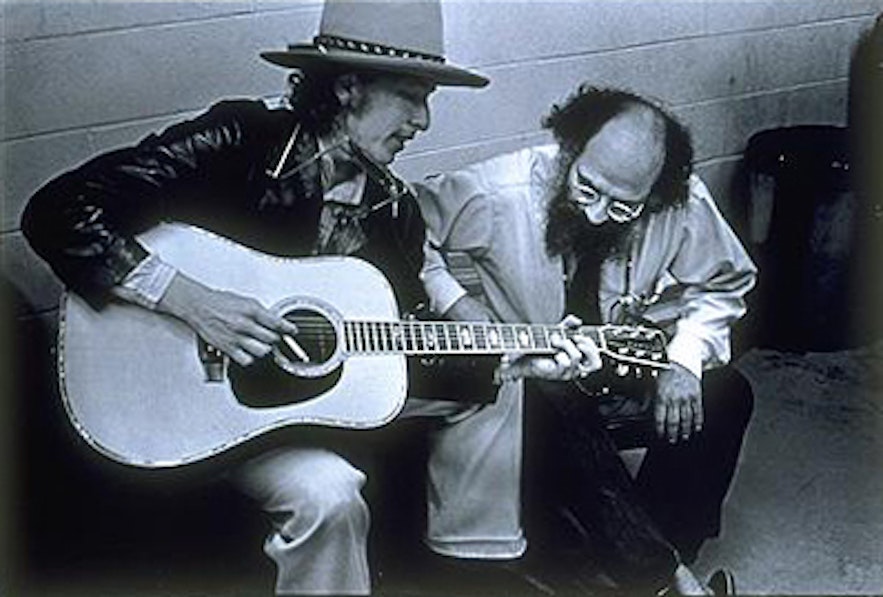 Dylan is one of the most famous faces in international folk music, here with folk poet, Alan Ginsberg (1975). Credit: Elsa Dorfman.Wikimedia. Creative Commons.

Frankly, the times were changing for an older Dylan, and I half suspected then that the world was no longer so open to this threadbare style of music. How foolishly judgemental a young man can be...

Don’t get me wrong, the ‘folkee’ stereotypes were still there; hairiness, loose-fitting clothes, crowd goers emitting the faint waft of marijuana. But Reykjavik Folk Festival still felt like something quite different altogether. The festival ran from March 2nd-4th at the aesthetically charming Kex Hostel. Their final night promised the likes of local favourite, Marteinn Sindri, the art and music collective, KÓRUS, and the highly anticipated Helena Eyjólfs, a singer most famous for a string of catchy hits in the early 1950s.

I should make a point here to mention the performers who I missed. I have since looked each and every one of them up, listened obsessively to the festival’s official spotify playlist, and now harbour a self-resentment that I still must see them live. Day one and two saw the likes of Ösp Eldjárn, singing quite literally with her own folks - nothing like utilising mum and dad as backup singers - to the enchantingly talented duo, RuGl, fifteen years old and skilled beyond their years. 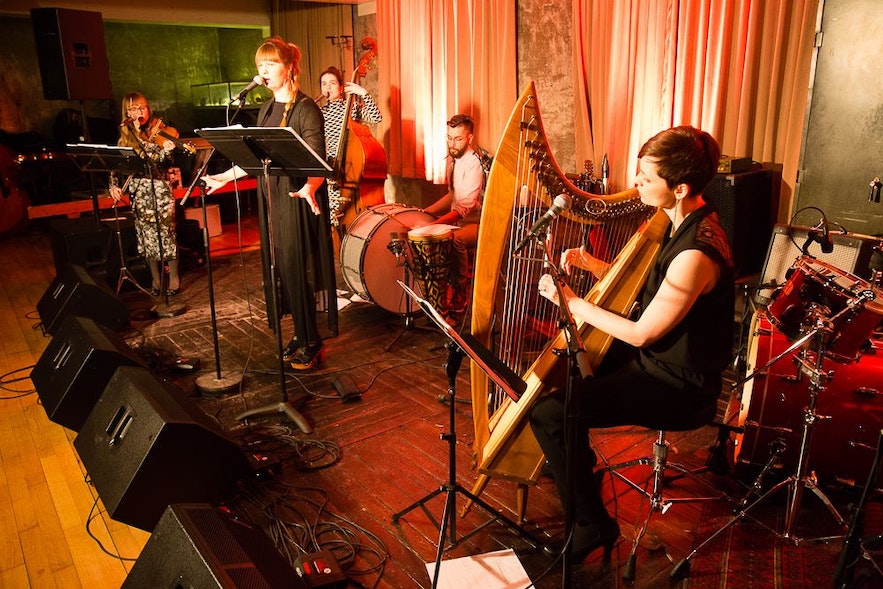 Also performing was Umbra Ensemble, with their dark melodic tones and haunting strings, as well as the musicians Þrír, Markús Bjarnason and Svavar Knútur, all of whom bring their own style to the scene, be it their lyrical craft, thumping beats or just good old, hand-clapping acoustic play. The festival also the traditionally folksy duo, Hljómsveitin Eva, and the latin-playing phenomenon that is Tómas R. Einarsson. I heartily recommend you give them all a thorough listen.

Having attended a number of jazz events at Kex, I was expecting the performance to be held in the main bar area. However, it was found down the hall in the Gym and Tonic Room (a name that, on closer inspection, disappoints.)

With a closed-door venue, festival organisers were free to turn this corner of the hostel into what appeared to be half pub basement, half makeshift church. Flickering candles lit the wall, their light reflecting off the beer kegs built up back. The seating too was particularly ethereal, pointed forward toward a stage of red satin curtains, a solitary piano, a double-bass, microphones like alters.

Marteinn Sindri was the first to perform, his smooth vocals and delicate finger picking an immediate delight. His long, shaggy hair, grizzled beard and flowy white shirt put me in mind of a young, Icelandic Jim Morrison, minus the inner torment and indecent exposure. There was something poetic, sincere and open about his songwriting, something uniquely honest to his style of performance. Without quite meaning to, I found my eyes closed, trying to imagine what his words, so foreign to my ears, could mean. Whatever they did, they put in a place of solitude and, dare I say, satisfying melancholy.

Marteinn was later joined on stage by the music and art collective KÓRUS, a choir of extraordinary capacity. Varied in age and style, this ensemble resonated deeply with me, both in terms of their beautifully celestial sound and their commitment to the performance. Not one person on that stage was half-hearted in their efforts, little surprise given they perform songs written by the group members themselves. On top of that, their music was unexpected, a style that I rarely listen to, if ever, and I couldn’t help but wonder how far the outer edges of folk music stretch whilst still fitting the genre. 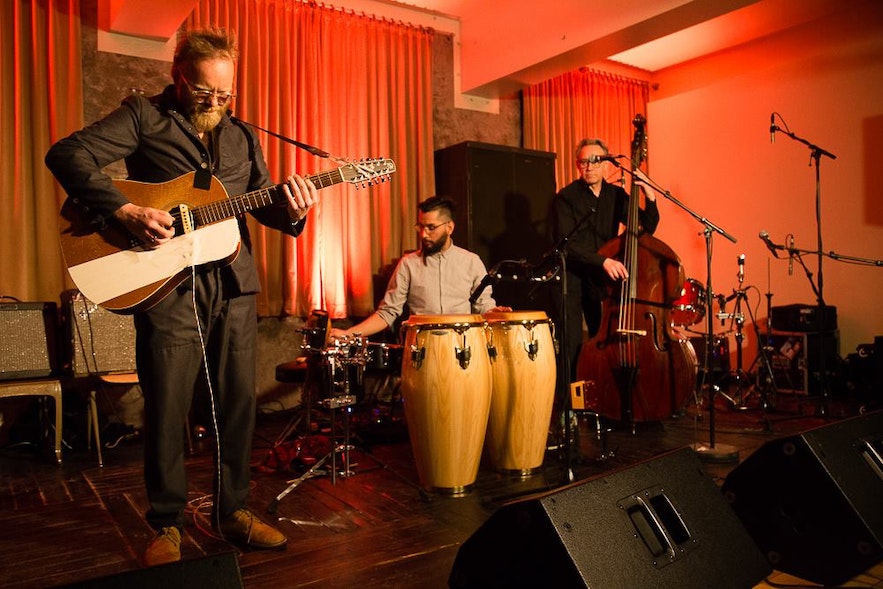 After all, folk is notoriously difficult to define, especially considering there are over two centuries of international music that broadly fit the definition. Some have argued that folk relates to national culture, to rural landscapes rather than that of the town, or have gone as far to say that folk is the anonymously authored music passed orally from generation to generation. To me, KÓRUS exemplified the concept of community music, friends coming to together to rejoice, create and share their passion. If that’s not folksy, I’m not sure what is.

One of the festival organisers took a moment between acts to personally introduce a performer clearly nestled in the heart of the nation. At 75, Helena Eyjólfs had only recently returned to music after a decades-long retirement, having made a name for herself in the fifties with traditional pop hits such as Hvítu Mávar and Í Rökkurró.

Her 2016 album, the self-titled Helena, was being sold alongside the festival itself, and the manner in which the room's energy shifted when her name was mentioned was almost tangible. She was joined on stage by two other musicians, piano player and producer, Karl Olgeirsson (an absolute force of nature, if I do say so myself), and the smooth bass player, Jon Rafn. But it was Helena herself the crowd clapped manically for, singing along to her most famous classics, cheering and hollering as she closed each number. Her natural presence, control of the crowd and blazing energy were mesmerising, to say the least. By her final song, I too was cheering like a life-long fan. 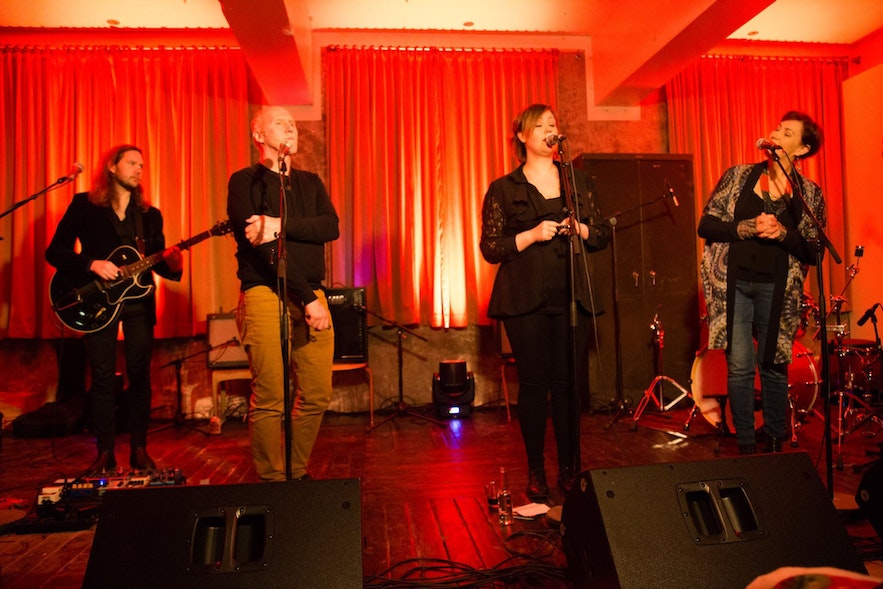 The night ended with the highly respected Sigurður Guðmundsson, an artist who has long involved himself in the Icelandic music scene, working with such bands as Baggalútur and Kaleo. Best known as lead singer and Hammond organ player with the Icelandic reggae band Hjálmar, Guðmundsson struck me as one of the evening’s most interesting, skilled and confident performers, a performer I now feel invested in. Playing with the band Memfismafían, Sigurður rounded off the festival with an eccentric energy.

Read more about the Music in Iceland 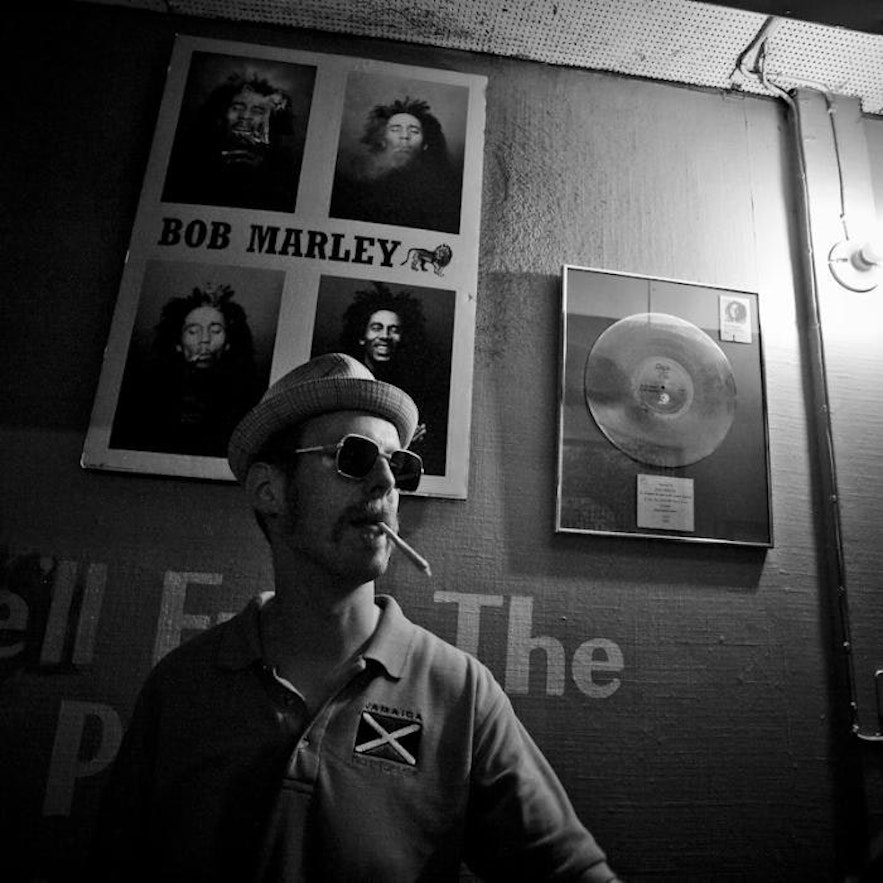 For a fairly young festival, I was moved and inspired by the grit of its performers, impressed at their rejection of electronic assistance in favour of real, raw playing. With our R&B hip-hop techno heavy culture, it certainly makes for a heartwarming change to go back to the roots of acoustic music.

To check out some of the musicians yourself, I have included the official Spotify playlist below for your enjoyment. It makes for the perfect easy-listening until Reykjavik Folk Festival 2018, which takes place between the 1st until the 3rd of March.