It was with a mild, yet very real apprehension that I learnt my brother (and fellow GTI writer) Richard and I were being sent to cover a helicopter tour, midway through a rather routine day at work.

Our dalliances with the whirlybird had, until now, largely been restricted to a solitary experience in childhood, flying prepubescent and barefaced over Floridian marshland. That was in the early 90s. Since then, our only connection had been watching Apache crashes on YouTube. Neither experience had done much in the way of convincing us to go near a helicopter, let alone fly in one, but it was Wednesday afternoon, we’d both had our fill of coffee and it was made painfully aware to us that this was one of Iceland’s most popular crowd pleasers.

Fifteen minutes after our mission briefing, we were sitting in the back of a cab being driven solemnly to Norðurflug. I tried my best not to imagine the taxi driver as a morgue driver (a difficult task, given his stoic, remorseful silence) and found quiet solace in the fact I was more likely to be killed driving to the helipad than I would be on the helicopter itself. Now terrified of both possibilities, I tried to imagine my boss calling home, telling my shaking parents that their eldest sons had both perished reviewing a tourist attraction. It was, let’s say, a rather brittle journey.

Upon arrival, we were greeted by a calm and smiling receptionist, who offered us the sound advice that death is just the beginning. She didn’t really say that, of course, but I do remember feeling better. It helped, perhaps, that our short wait was distracted by the incredible aerial photography adorning the walls. There were also decorative, celluloid-styled frames, each proudly displaying the films Norðurflug had helped produce (either that or there was a small cinema hidden in the backroom.)

Their cinematic influence ranged from such local masterpieces as 101 Reykjavik to Hollywood blockbusters like Oblivion, The Secret Life of Walter Mitty, Batman Begins and Prometheus. As a former film school student, I was half-tempted to ask whether they needed a clapper loader for their next shoot. You can check out the most recent examples in the Truenorth cinema reel below:

My brother, sitting rigid, bald and alert in the waiting area, was reading aloud from the Norðurflug website. I expected the voice of a hostage, but what I heard instead was a tone of growing confidence. 'Most experienced pilots in the private sector...' 'Largest fleet of helicopters...' 'This experience will be the highlight of your trip to Iceland...'

I was beginning to feel safer as well, the reasons largely twofold. First, the sky was beautifully clear. Second, and most importantly, the rest of the group appeared to be sane, rational and unlikely to make a sudden move for the joystick.

The pilot, whose name I unfortunately missed, was a chiselled Icelander in middle-age, attired in black, aviator overalls and red-tint sunglasses. His gruffness, straight-to-the-point attitude and (dare I say) age were all of an enormous relief to me. He positively oozed experienced professional, and I was thankful we were being piloted by someone who was, at the very least, older than me (believe me when I say that that’s not meant as a denunciation of young pilots, just a personal preference.) 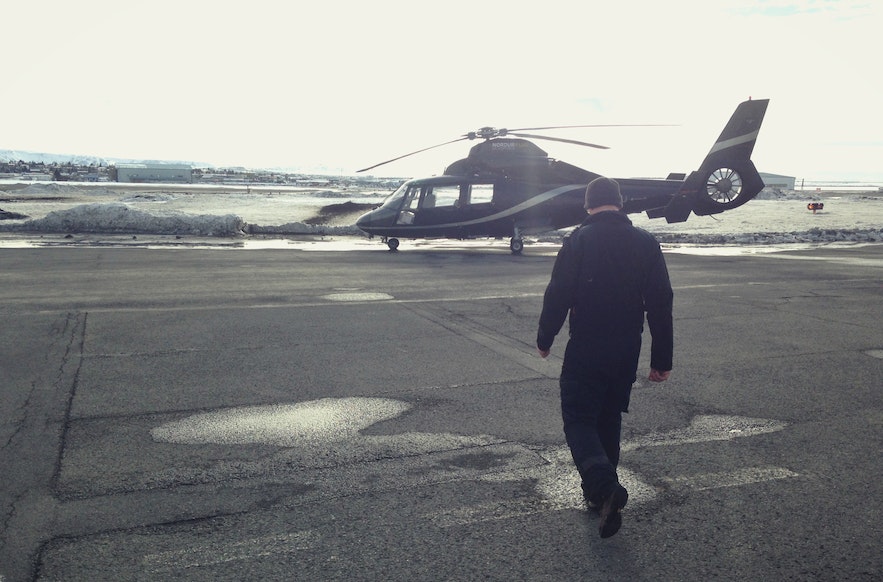 Within minutes, we were introduced to the Reykjavik Summit Tour, our guide pointing out our route on the map. Our short flight, just under an hour, would take us north from Reykjavik’s domestic airport toward Bláfjöll, the “Blue Mountains.” We would fly effortlessly over the dried lava fields that surround the city and be able to point out local landmarks like Mount. Keilir and the steamy volcanic vents that give the city its name, Smokey Bay. Once there, we would land on a snow covered summit and, I assumed, take photographs of the scenery and change our underpants.

By the time we stepped out onto the runway’s tarmac, both my brother and I had found a surprising sense of peace. The helicopter (an AS365N Dauphin, for all you chopper fans out there) was much larger and sturdier than I had imagined it to be. Since then, I have discovered the Dauphin is the only one of its kind in Iceland, a twin-engined powerhouse capable of holding up to eight passengers and ensuring the highest levels of safety. I didn’t know that at the time, of course, but it has made me feel even safer in retrospect. 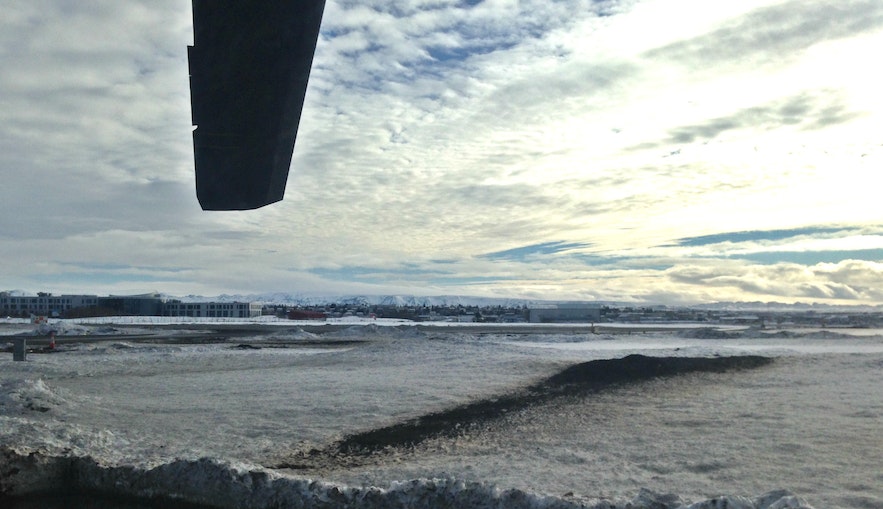 I was privately hoping that we would enter the helicopter with the rotors spinning, like war correspondents fleeing 1970s Vietnam. They were perfectly stationary, however, making boarding and strapping oneself in a needless luxury. As the pilot readied himself behind the joystick, muttering words like “...waiting on the tower...” I could feel my breathing tighten again, my chest rising with the ever-increasing thud thud thud of the rotor. But was this fear? The onset of a panic attack? Was it even, quite possibly, the rumblings of excitement? 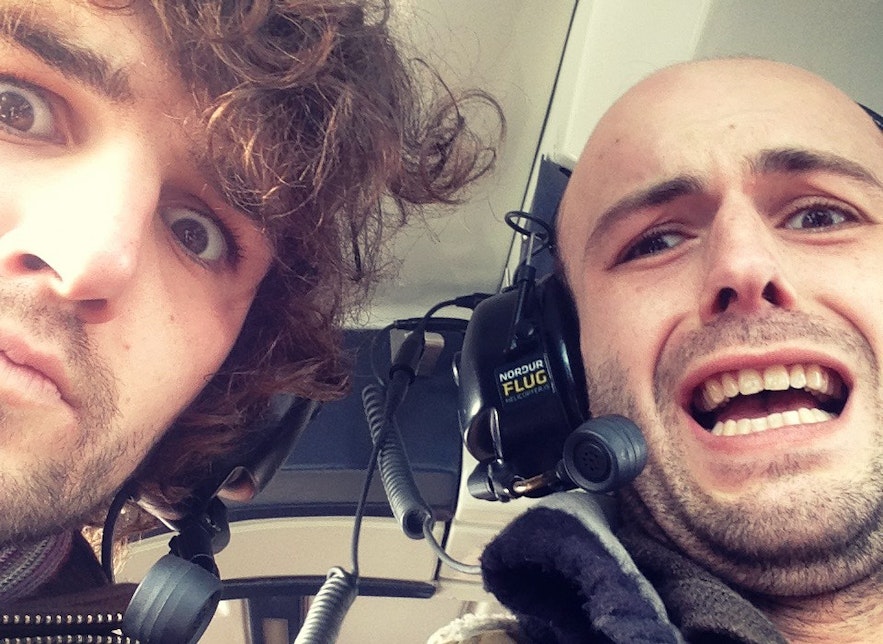 Before I’d had a chance to fully consider the question, the helicopter was airborne. The landmark-restaurant Perlan was suddenly rushing beneath us, the Capital rooftops a kaleidoscopic myriad of red and blue corrugated iron. The wide, wild openness of the Reykjanes Peninsula was suddenly omnipresent and incomparably huge. And the Atlantic Ocean, so close, glimmering in the midday sun, was beckoning and ancient. For a brief second, I felt foolish. There was no fear to be had up here. No terror. No anxiety. This was, in fact, the only way to travel! Suddenly and spiritually, I felt a little closer to the current US President (if only on that point.)

Within minutes, we were out of the city,  flying over the dried lava plateau, Hellisheidi. It may sound ignorant, given that I’ve lived in Iceland for a year now, but I was immediately struck by the reality of Reykjavik’s isolation. A thorough awareness of Iceland’s size, diminutive population and rugged terrain means little in contrast to the country and the city laid out in this way. The downright vastness of it all, the sense of lurking danger, the untouched mysticism. Honestly, I felt eternally grateful to be a part of it. 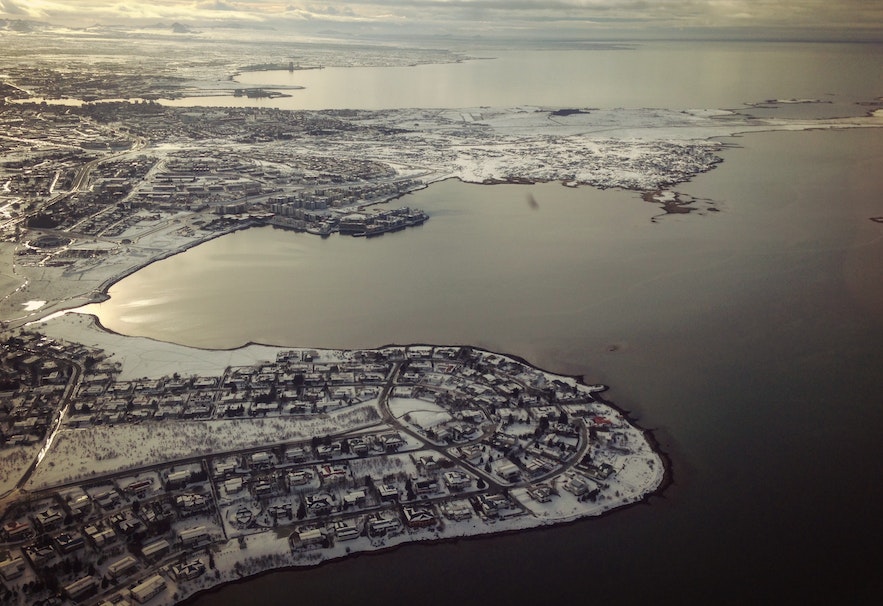 Our pilot approached the Blue Mountains at speed. We soared fluidly across the first peaks before making a dramatic, 90-degree rotation, almost skimming the slopes below us. Now hovering slowly, we were privy to two enormous, dried craters on the mountain tops. Impressive though they were, it was the manoeuvrability of the aircraft that had truly enraptured me. For such an enormous machine, its response time to the pilot’s command was reflex-quick. I was half tempted to inquire, “how do I get myself one of these bad boys?” before hurriedly remembering that I'm not a millionaire, nor am I a pilot. 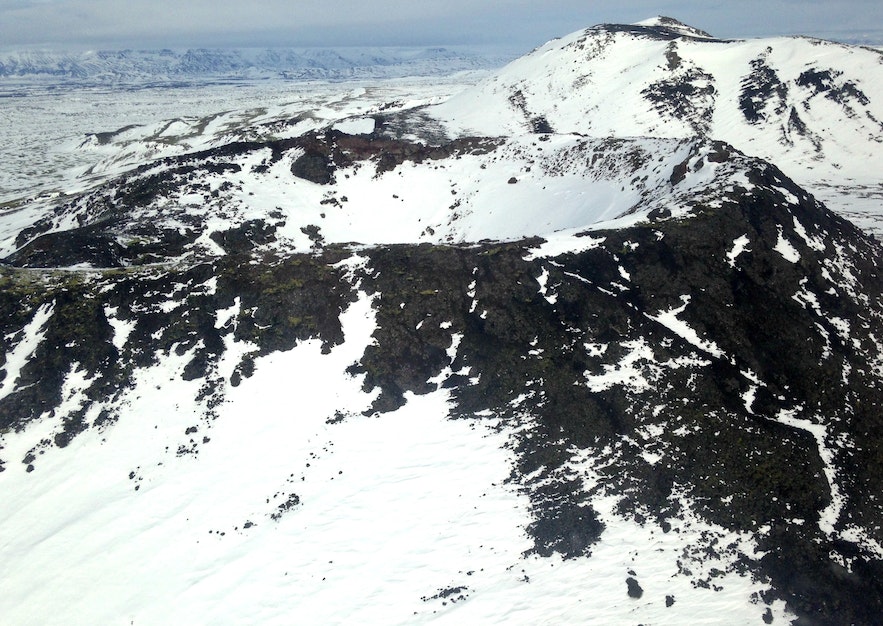 We arrived at the summit of the Blue Mountains with an effortless landing. For a couple of minutes, we waited as the rotor blades stopped spinning, and simply basked in the reality of our location. Only moments ago, we had been nervously knee tapping in Norðurflug’s reception, now we were on top of the world, our city a mere spectrum of distant colour and light. Beyond Reykjavik, the open blue expanse of the ocean rolled its way to the horizon. And behind us, as far as the eye could see, table-top mountains stretched ever onward. 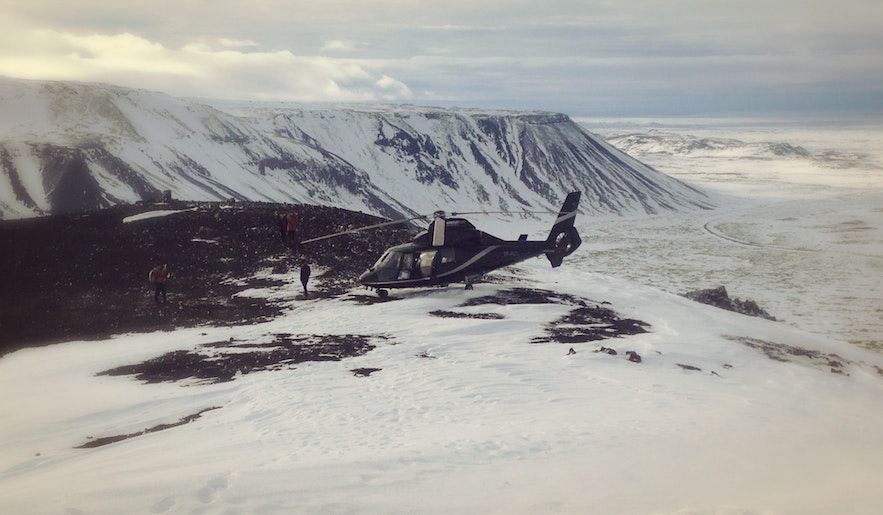 We were on top of the mountain for a solid ten minutes or so, snapping photographs, idly walking around the aircraft and enjoying the vast panoramas. Dressed only in my office wear, I found I was getting rather cold on the mountainside. I was quick to note I wasn't alone in this, however, with certain members of our groups dressed only in t-shirts (...don't ask me why.) Frankly, it was something of a relief when the pilot ordered everyone back into the helicopter. Nothing says cosiness like a helicopter on a mountainside. 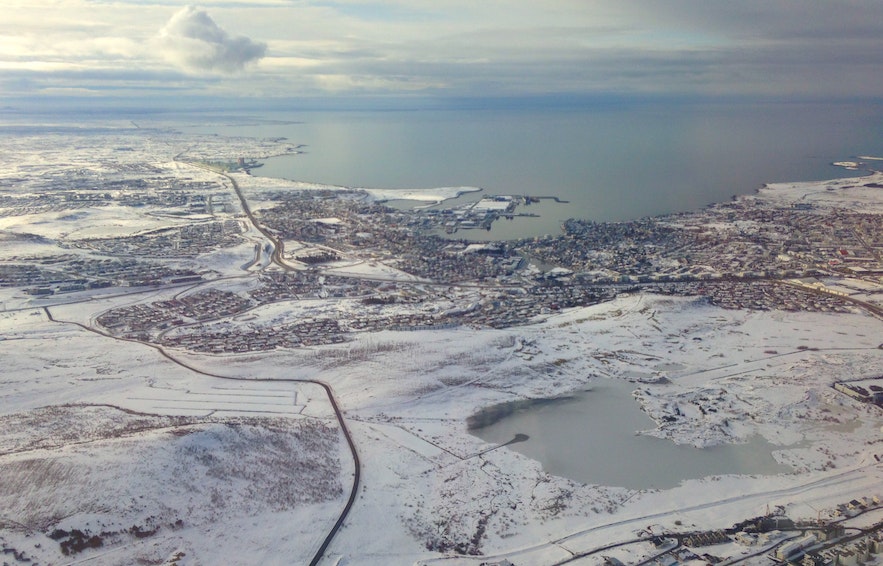 As the rotors whirled overhead, the pilot turned in his seat to face us and asked,

'Do you guys want to head the normal way down? Or the fun way down?'

Somehow, beneath that red shade of glass, I could tell his eyes were twinkling. His lips curled into a wicked smile as neither I, Richard nor the rest of the group immediately answered.

The helicopter jerked into life, roaring forward suddenly only metres above the snow. From the front window, we watched as the lip of the mountain approached, then fell away behind us, leaving nothing but empty space. My heart, now securely position in my throat, began to thump awkwardly against the Adam's apple.

The pilot, laughing half-manically, turned the helicopter nose down, making the craft almost vertical as it followed the slopes’ steep gradient. The ground, at first a mere blanket of snow, became a mass of jagged rocks and black crevasses as it approached at speed. At what seemed like the last moment, the nose was pulled up and we soared gallantly through a quiet valley of frosty hills. Now everyone in the helicopter was laughing, throwing high-fives around, hugging one another instinctively. Adrenaline does that to people, it would seem. 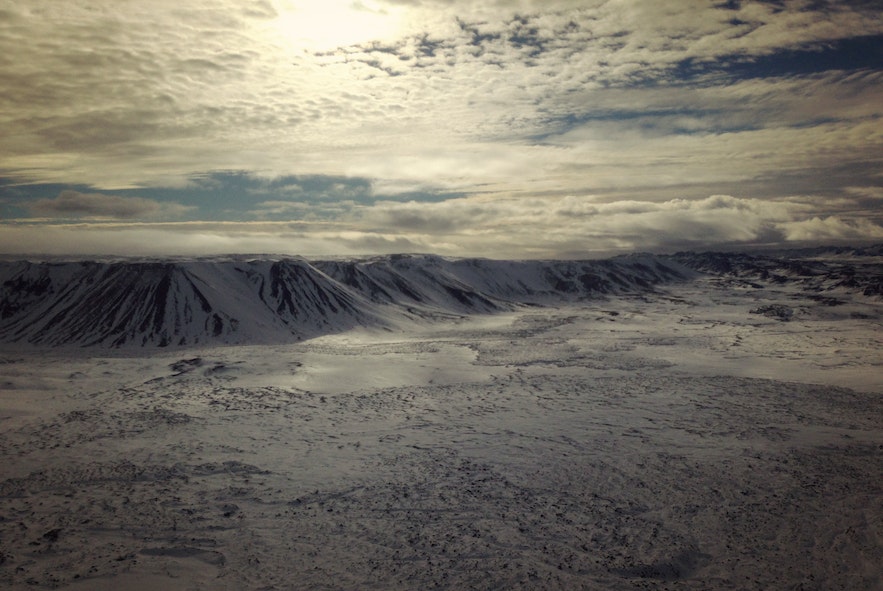 The return flight to the city was one of immense peace. We crossed the lava fields again and followed our guide’s eye as he noted various points of interest; the surrounding mountains, the water pipeline that heats the entire city, the lakes and dormant volcanoes.

We circled around the city, flying past Harpa, over Old Harbour and across the town. From the window, my brother and I pointed out our own points of interests, spotting former residences, employers and even where we lived and worked now. It gave me a great sense of belonging, knowing that I'd seen this city from perspectives I hadn't even of my hometown back in the UK. Flying hundreds of feet above Reykjavik, I suddenly felt myself a true resident, an outlander no more.

We soon bumped down onto the runway and our short tour was over. Without hesitation, I shook the pilot's hand, thanking him graciously for what truly was one of the most memorable and exhilarating experiences I've had since arriving in Iceland, all those months ago.

In light of that fact, recommending Norðurflug Helicopter Tours, or their incredible Reykjavik Summit Tour, doesn't quite seem enough, given the enormous breadth of what they do and where they fly. All I can say is, being in a helicopter, just once as an adult, has thoroughly changed my opinion.