If you're planning a bachelor or bachelorette party in Iceland, I can tell you the best option to book for it: Bubble Ball.

It's also a great option for a group of friends, even if no-one is getting married ;)

About a week ago I went to a Hen-Do (bachelorette party) for a friend of mine (we call them Geese Parties for women in Iceland, and Stag Parties for the men).

My friend actually got married a year ago, but it was a secret and only the closest family members were present (and they didn't even know about it!) Her closest friends decided however to still have a hen-do for her and we decided to start off with this really fun activity called Bubble Ball.

The video here above should give you a pretty good idea of what this looks like and entails - but basically you dress in a giant, see-through, plastic, inflated ball from your waist that reaches further up than your head, and then you get running and bumping into your friends :) Inside the ball are handles and a couple of straps that function like a backpack, the ball just sits on your shoulders (important to wear a long-sleeve top!) 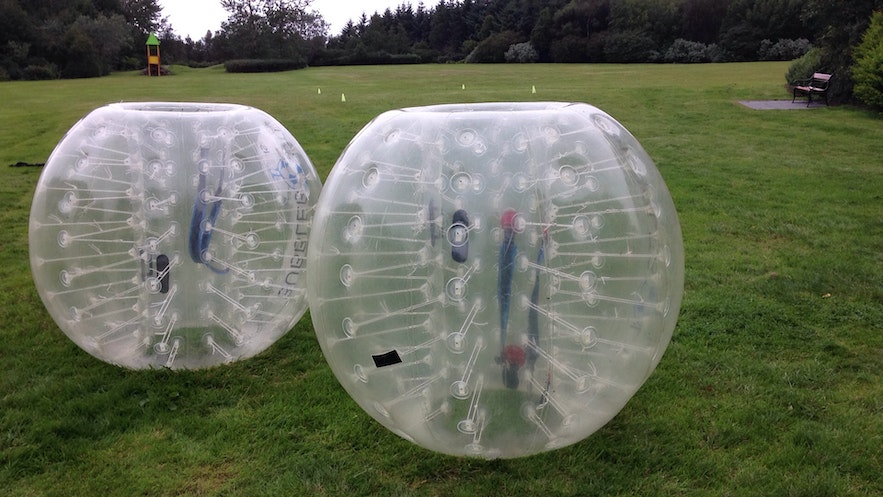 I booked this activity for the group, and it was super easy to book! Basically it costs 30 thousand ISK for one hour, for the whole group. They have 10 balls (we happened to be exactly 10, but if there are more of you then you can take turns!). So if there are 10 of you, then this only costs 3000 ISK per person, a total bargain!

When the weather is good then the activity takes place outdoors, normally either in Laugardalur recreation centre of Reykjavík, or on Klambratún - a park that's by Kjarvalsstaðir art museum. We went in Laugardalur.

When the weather is bad, then they arrange for the activity to take place indoors, but then you have to pay a little bit extra for the rental fee of the indoor facilities.

But let me describe the process a bit: We arranged to meet up in Laugardalur at 4pm on a Saturday. We were told to wear sporty long sleeve shirts and long trousers, wear contact lenses instead of glasses and bring plenty of water since this is a sweaty activity (and they're not kidding!)

We mainly brought some beers, but also some water - and I recommend bringing a lot of water, because you'll be running around with 10kg on your back, and it's hard to stand up after your friends throw you down! 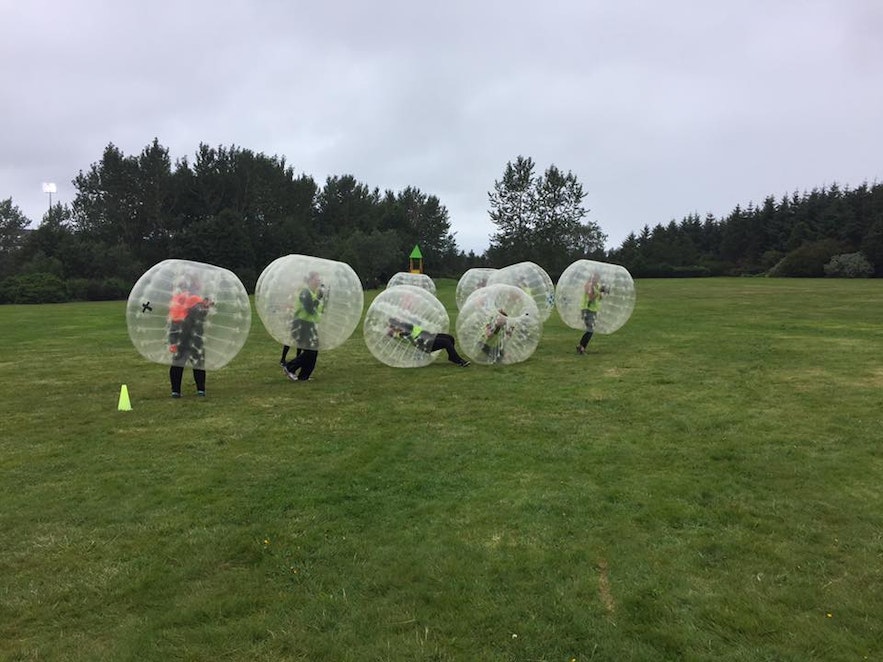 We were greeted by a super fun and welcoming lady that explained some technique and rules, and then just got going. She managed the group perfectly, making us play football first, then some other games such as last man standing and last team standing, as well as rolling down the hill in a roly-poly. She was really chilled out and funny, and made lots of fun comments during the process, always making us feel like we were just being told what to do by a good friend that was up for some fun (but also showed no mercy!)

I spent the majority of the time laughing my ass off, and either upside down or on my side, rolling into the distance. I also attacked the bride-that-was quite a few times and gave her a bit of a hard time. My favourite was when I got attacked and flew a 360° and landed on my feet again, ready to attack! :) Most of the time you look like a total dork though, like fish out of water, struggling to get back on track.

The company that arranged the tour, Bubblebolti, were excellent and I can't recommend them and this activity enough! I want to go again with a group of friends just for the fun of it, it definitely beats going to the pub!