Iceland has a fun tradition that includes cream and chocolate buns, salted meat, bags of ash, costumes and singing! And today marks the last day of this 3 day celebration. Let me explain how it all works.

This tradition takes place over 3 days. On a Monday in the 7th week before Easter you have Bun Day (Bolludagur). The following Tuesday is Explosion Day (Sprengidagur) and on the Wednesday there's Ash Day (Öskudagur).

On Bolludagur, Bun Day, people eat buns. But there's a little more to it than that. I spent this Bun Day in London on a film set with a little 6 year old English girl, who literally dropped her jaw when I explained to her how Bun Day works in Iceland!

Basically, before Bolludagur, you make a homemade paddle of sorts and early in the morning on Bolludagur you try to get up before your parents and wake them up by spanking them with the paddle, shouting 'BOLLA' (Bun) each time you hit them. So if you manage to spank and shout BOLLA BOLLA BOLLA three times, then you're rewarded with 3 buns. If you do it 5 times, you get 5 buns. And so on. There's not a strict correlation between the spanking and the amount of buns you can have however - and many people have a 'bolla' tea party on the previous Sunday (as it's best to bake them on the Sunday so they're ready early morning on Monday). 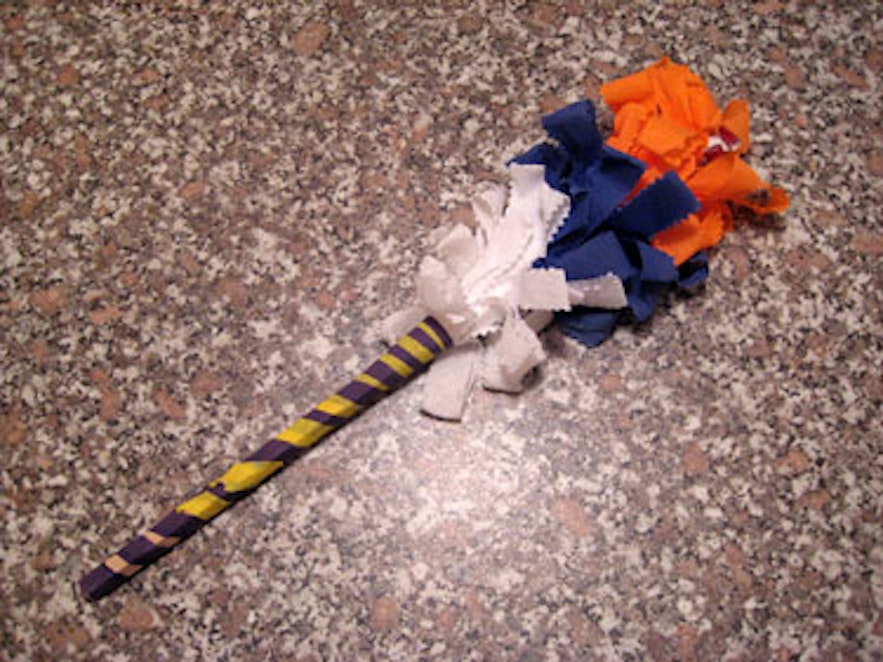 The buns nowadays come in various flavours and shapes, but the most traditional ones are either made from a watery dough or a yeast dough, have chocolate on top and are filled with whipped cream and (preferably homemade) jam. Although I was in London, I made sure to celebrate this tradition (that's a favourite of many people) and made some homemade water dough buns. I even made a paddle too and gave it to my housemate who had her birthday (but I forgot to take a picture of it, so the paddle you can see above is just a picture I found online). 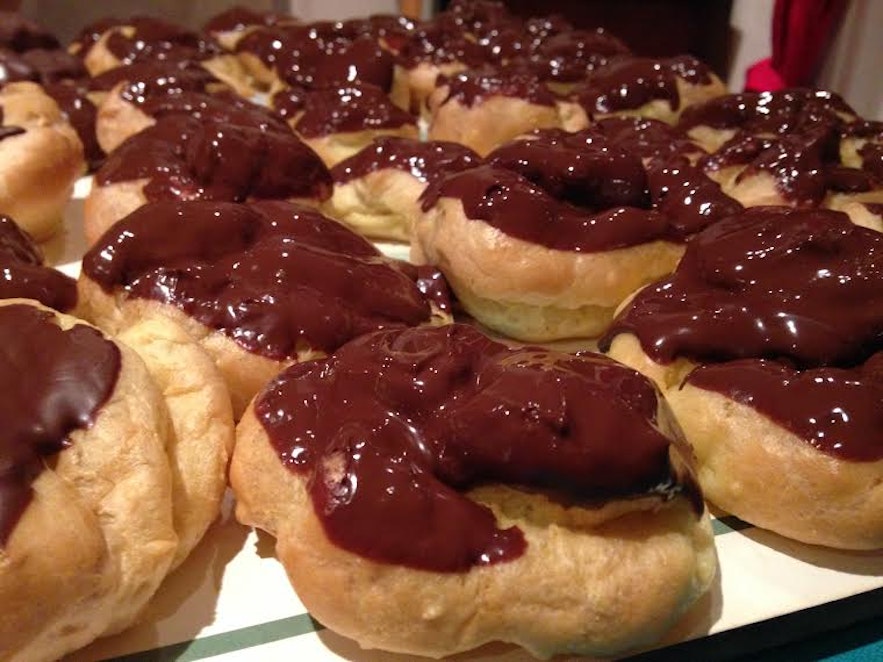 But the buns came out successfully (which can be a bit tricky). My favourite is to dip them in dark chocolate and fill them with banana cream (and I tried putting rhubarb jam with it too that was super tasty)! I'll put the recipe for the buns at the bottom of this blog.

So yesterday there was Sprengidagur - or Explosion Day. Better known as Mardi Gras in English (Fat Tuesday). This day marks the last day before lent starts (although nobody ever takes lent seriously in Iceland, at least not anymore!) On Sprengidagur people therefore eat as much as they can of meat, or until they 'explode'. There's a typical meal for Sprengidagur, that consists of salted meat and green peas. It may sound worse than it tastes, it's actually quite tasty. The meat is often served in a soup with potatoes, green peas, carrots and other root vegetables. 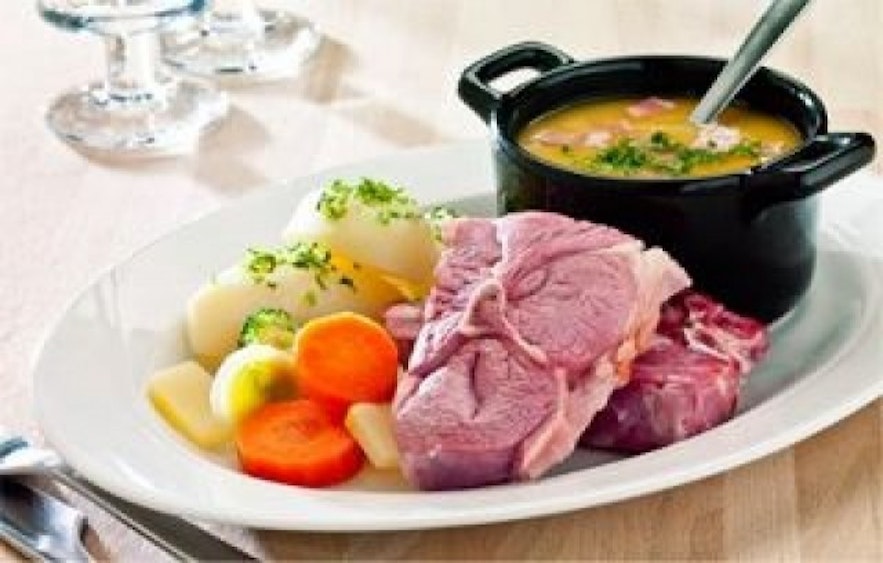 Last night I flew to Iceland and onboard the flight passengers were offered a taste of the very tasty meat. Unfortunately the flight attendants didn't entirely explain the tradition enough, so I ended up explaining it to the confused passenger sitting next to me that asked 'Why are they giving out salted meat samplers?' And now you know why :)

Last but not least, there's Öskudagur (Ash Day - also known as Ash Wednesday in English). Traditionally on this day people would hang little bags filled with ash on the backs of friends or strangers. Originally men would hang the bags on women and vice versa and the bags would contain little sweets or poems even. Then it became a custom of children to hang the bags on grownups, preferably without the grownups noticing it. (I once managed to attach a bag on a policeman without him noticing it when I was a kid, much to my delight). 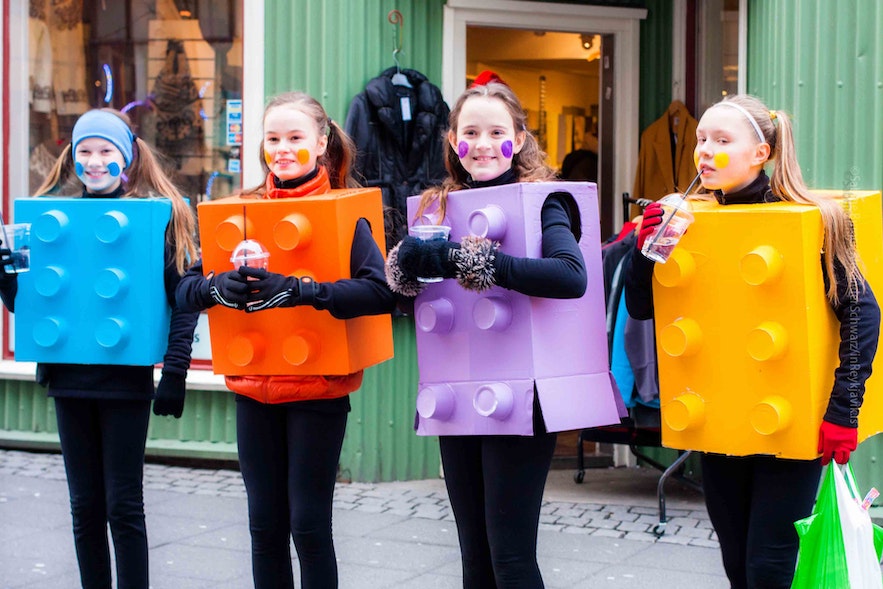 As well as poking fun of the adults then kids also dress up in costumes (similar to Halloween, except the costumes don't have to be scary) and sing for people in shops in return for treats. As I'm sitting in the Guide to Iceland office now on the main shopping street Laugavegur, a number of kids have come in and sung for the whole office, and in return getting some candy. This tradition is so ingrained in me that I've never really given it a second thought. However, with the amount of tourists being around and grinning at the kids in costumes I've thought about it a little bit today - and find that although the costumes and candy are highly related to the American Halloween tradition, the best bit of this Icelandic version is the singing that the kids have to do to earn their sweets. They can't just show up in a costume, they have to make an effort and sing (in front of total strangers!) to be rewarded with sweets. Some of them are more shy than others (and some more in tune than others!) - but everyone sticks together and this is surely a great way for the kids to boost their self-confidence and get better at talking/singing in front of a crowd :)

Sadly the custom of the ash bags has been fading - but apparently may be having a comeback! That was always my favourite part of this tradition :)

Put the oven on 180°C. Bring butter and water to a boil in a pot. When boiling, add flour and baking powder and stir until dough doesn't stick to the sides of the pot. Cool for 10 minutes. Then add one egg at a time, whisking well in between each egg. The dough should be liquid-y but still stay up when you put it on a baking tray. Put on a buttered baking tray (or non-sticky baking paper) and bake for 30-35 minutes. Make sure you DON'T open the oven until after 30 minutes. After you take them out, dip the top into melted chocolate and let dry. The buns should be clumpy and odd shaped and when you cut them open they have a space inside that's perfect to stuff with whipped cream and jam. Enjoy! :)