2-1! Iceland and England just competed in the round of 16 game. And as (Icelanders) predicted, Iceland won!

Ok, so, half of this blog is written in advance (all the sensible sentences where I don't screw up people's names and timings) - the other half is written approximately as long as it took me to celebrate briefly and walking home to write it (and stock up on booze). So, approximately 10 minutes later (Reykjavík's small). That's the same half that's written after a bottle of bubbly and a beer (the bubbly was finished even before half-time, that's how certain I was we'd win!) 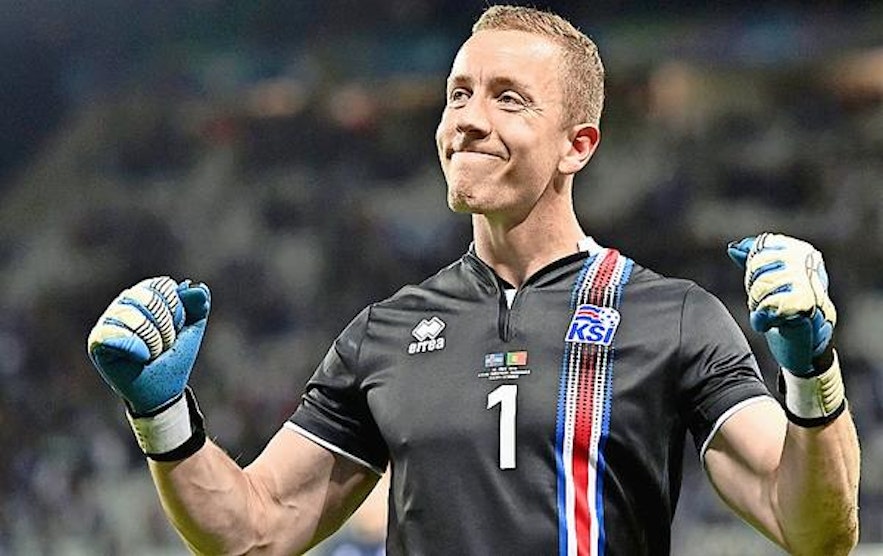 Our great goalkeeper Hannes Þór Halldórsson. The man of the match for me!

England scored first, about 4 minutes into the game (Iceland was just gracious enough to give them a head start, through a penalty even!), and approximately 10 seconds later they found the wrath of the Icelandic team as we evened the score. (Maybe it was 2 minutes later, but it felt like it was very quickly after!)

Before half-time, the score was already 2-1 - which Iceland managed to keep throughout the second half, despite England's desperate attempts to even the score.

After the game it turned out England had the ball for about 75% of the time, and had around 18 attempts at the goal, compared to Iceland's 25% and 8 attempts. Better make those attempts count!

The game had to end with a win, no ties allowed this time - the winner goes through, the other team goes home.

England is currently number 11 on FIFA's ranking list, and Iceland number 34. So we knew it would be a tough match - but were fully confident after beating Austria (who are ranked number 10, one above England). Iceland's defence is strong and the team has got nothing to lose and is strong and united.

Perhaps the English team wouldn't be as united. And as it turned out, they weren't. Great match though, and I'm sure England will do well next time round. (Sorry guys!)

Whatever the end result would have been - this would still be the furthest the Icelandic football team has ever made it - and the most important sport event to have happened in the history of Iceland. Perhaps that's why 10% of the nation is now in France, supporting the team and often overpowering the other supporters.

As it turns out, Iceland is now in the ROUND OF 8, competing against the host nation France on Sunday!!! And that's a step further of how far Iceland's made it!!! :D I'm considering buying a flight ticket and a match ticket - it is the start of the month so I'll be paid before the weekend... maybe Guide to Iceland will go on a group trip?! Hey, boss, (who's now in France), how about it? ;)

For those of you that don't get how HUGE this is (such as my American friends):

Just imagine living in a small town, where no team had ever made it to any big tournaments, and then your local team makes it to the European Championships - a local team that has normally been around number 100 on FIFA's ranking lists, competing with the best in Europe? Everyone would be losing it!

I used to live in England, for the past 7 years, and have a lot of English friends - and an English boyfriend that now lives with me in Iceland. (He was torn who to root for, his options were: Iceland, or Iceland. He sort of swayed between reluctantly cheering for Iceland, and very enthusiastically cheering for Iceland). I also enjoyed bragging over winning to endless amounts of friends in the UK during the match. So this was a very interesting match for me!

Here you can take a look at my viewpoint during the last 30 seconds of the match, and the ensuing celebrations downtown Reykjavík (on Arnarhóll hill) :)

Iceland will compete against France on Sunday, in the round of 8. Tough competing against France, in France! But maybe the Icelandic supporters can still be louder than the French ones! :) The Icelandic audience surely beat the English ones during this match!

Maybe I'll see you in France on Sunday :D