Iceland is a country with a very small population. VERY small population. So when the Icelandic (male) football team qualified for the European Championships, the nation got pretty excited. Iceland is the smallest nation (with only 330 thousand inhabitants) to participate in the major finals. 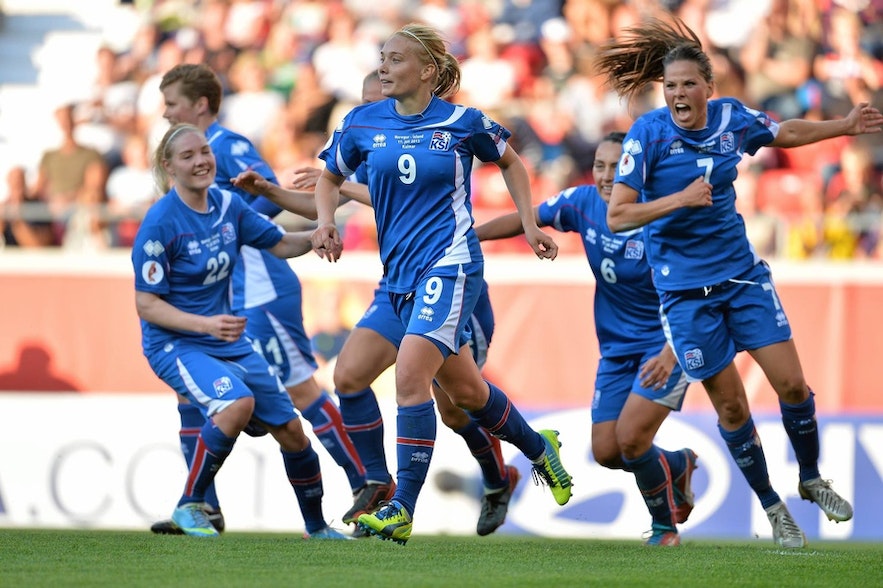 Last night, Iceland played their first ever game in a major championship. (That is, the male team - the female Icelandic football team has actually participated in the European Championships three times, in 1995 (a home and away knockout competition), 2009 (first major football tournament Iceland partakes in) and in 2013. The female team ranks number 20 on FIFA's list).

The girls actually have a number of great advices for the guys, this one being my favourite one, where Margrét Lára tells the guys not to rip their shirts off when they're standing next to Christiano Ronaldo, since that's just not going to look good. Hilarious (but true). There's also other advice about focus, good sleep, good team moral etc.

But let's focus on the guys.

Last night the first game happened, Iceland vs Portugal. The game started at 7pm in Iceland, and I can assure you that almost everyone was watching it - and a pretty big percentage of the Icelandic population was in France cheering them on (I've seen comments of 3-8% of the population being there!). Even people that hate football were watching it with one eye (or so I heard from the most anti-footballing person I know, my sister).

I myself love playing football (I used to train with many of the girls that are now in the national team. They were already incredible at the time, and I kind of gave up when it became too serious - I was in it for the fun). However, I don't really like watching it much. Except maybe when Iceland is playing in a big match (that rarely happens). So I was hoping for an entertaining match last night! And boy was that delivered! :)

The tiny Icelandic nation managed to keep up with the strong Portuguese team, relying a lot on a strong defence. At halftime the score was 0-1 in Portugal's favour but Iceland managed to get a goal in the second half - and keep the tie until the very end! To come out of this first game in the group, against the strongest team with 1 point is an incredible result, so the Icelandic audience had a good and loud celebration - so much that it even irritated Ronaldo to the point of saying Icelanders were small minded after the game to celebrate like we just won the EURO cup - but he can be sure that Iceland will continue to cheer and celebrate just as much for every single game Iceland will play in this tournament, since every step Iceland takes from now on is a new step in Iceland's football history!

And even if you're not a football fan, you can still be entertained when the commentary on it is as good as Reykjavík Grapevine's! I'll be checking their Twitter feed during the next Iceland game, that's taking place on Saturday (18th of June) at 4pm when Iceland meets Hungary. The final game within this group is when Iceland plays Austria on Wednesday (22nd of June), also at 4pm (Greenwich Mean Time).

As a bonus, I have a friend on the team, who scored a gorgeous goal the other day - I'll be rooting for another one of those in the upcoming games - go Birkir!

Guide to Iceland had a BBQ in the glorious summer weather we had yesterday and watched it together on a big screen in the office. I watched the first half with them and then biked to my boyfriend's workplace for the second half - there was hardly anyone on the streets on the way, except unsuspecting tourists.

In Reykjavík downtown, on Ingólfstorg square, a big screen has been set up with a number of stools for people to sit on and enjoy each game. It was completely packed last night (the good weather probably helped) and definitely will be packed for the next games too.

So if you're wondering what to do in Iceland in the upcoming days, then find a nearby screen, bring some beer, make friends with the locals and shout: 'Áfram Ísland'! :)