Iceland is out of EURO 2016, But We're Still Celebrating!

Iceland is out of the European Championship after being defeated by the host team France. Congratulations France, and congratulations Iceland on making it this far and making your country proud.

At half time the score was 4-0 for France and it didn't look good for the Icelandic team, I was scared we'd get our asses whooped and sincerely hoped Iceland could get a goal or two in and wouldn't get any more goals on us from France. Fortunately Iceland got 2 goals in (the only team to score 2 goals against France in the competition!) - but unfortunately France also got one more goal in.

Nevertheless, even though Iceland is out of the tournament, Icelanders still salute their national team as heroes, as you can see in the video above that's shot straight after the game ended. Even though you lost this one game - the first match Iceland has lost in the entire tournament, you'll remain like winners in all of our minds - like this: 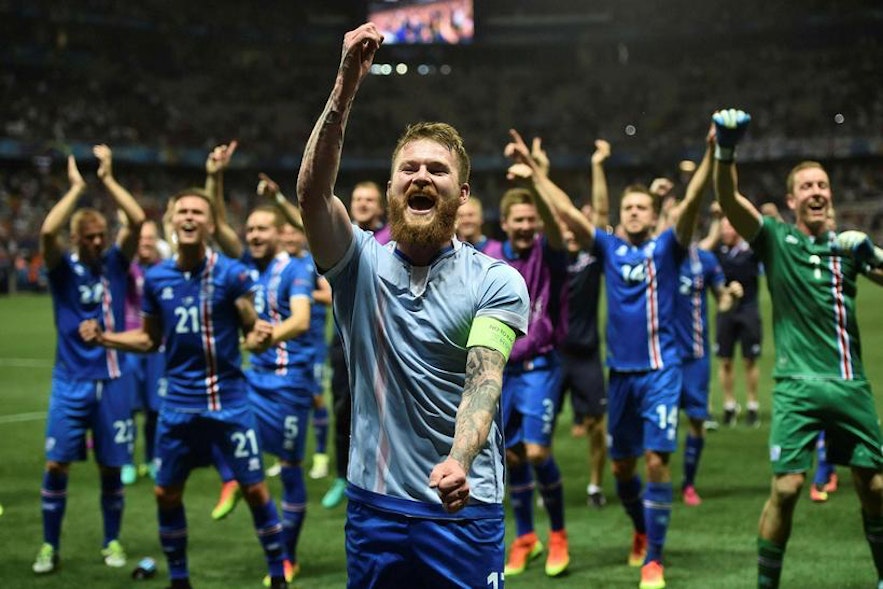 For all the media that says that Iceland's 'fairytale' has ended, this was no fairytale. The Icelandic team has worked very hard for many years to get to where they are today, and they haven't finished yet. There will be more tournaments to come, and I'm confident that these guys will continue to make Icelanders proud in future matches.

Congratulations France, and thank you for a very worthy game. I wish France a good going for the rest of the cup (although I'll be rooting for Wales to win the final!)

Frankly, it would've been a bit rude of Iceland to go and win the entire match the first time we participate - but hey, there's always the World Cup - and I'm sure Iceland's opponents won't be underestimating them when the qualifying matches for the world cup take place! :)

For anyone staying in Iceland, you should head down to Arnarhóll tomorrow evening at 7pm to greet the team when they return home, after the incredible achievement they've managed they'll be greeted as heroes :)

I don't really understand why they're all returning tomorrow though, couldn't they have been given a few days to relax in Paris - maybe even attend the final match?

In any case, thanks to people all over the world that have been showing Iceland support throughout the tournament - and I hope we'll get to see some of you visiting Iceland in the future.

Now, since the football madness is over, and my ears have started ringing after all the noises and beers in the pub afterwards (people are still celebrating, despite the loss - not as loudly as before, but the streets are very lively!) - now I'm going to go enjoy dipping my toes into a hot pool whilst watching the sun set and rise again with some friends.