What's Iceland's nightlife like? Wondering where to go for a great night out in Reykjavík? Do you want to go where the drinks are good, the crowd is cool and the dance floor is fun? Look no further than Pablo Discobar.

Reykjavík's nightlife is notorious around the world. Although the drinks are expensive, you find people dancing the night away until 5am on weekends (Friday and Saturday nights), and go out for music, cocktails and even some dancing on weeknights until 1am.

Although many tend to dress up for the nightlife in town (especially if they are single and looking to dress to impress), then there are very few places that have a dress code for entering. And even fewer that require an entry fee, an entry fee is only required for specific shows, such as the fantastic drag or cabaret shows you can find in town, stand up comedy or live music. 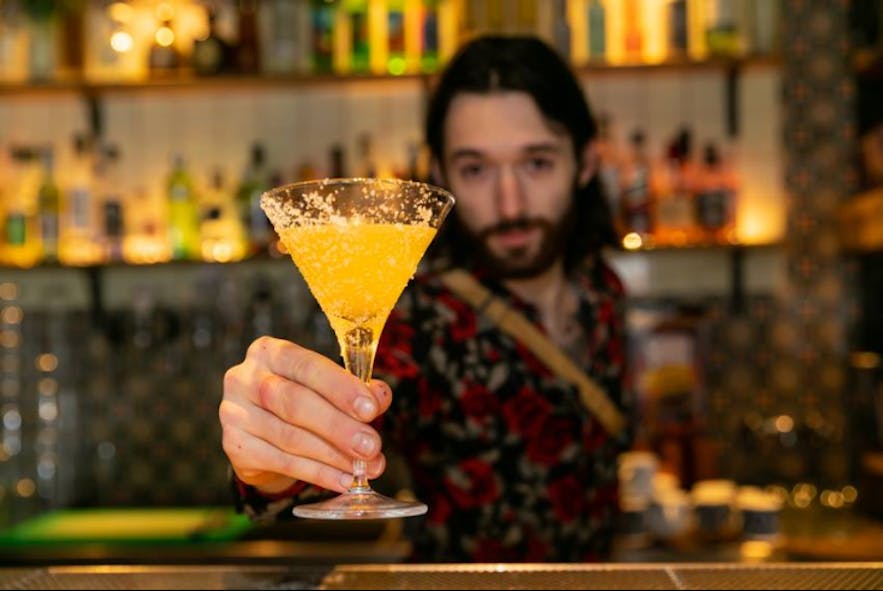 So on a regular night out, if you're not going out for some live entertainment, then where is the best place to party? In my own opinion, it's definitely Pablo Discobar.

Although this is one of the few places in town where they do have a bit of a dress code and suggest smart/casual clothing on weekdays and a party dress on the weekend, I don't mind it that much. As long as I can get in with nice sneakers and don't need to wear high heels, I'm good to go.

If you happen to have a colourful Hawaiian shirt with you, then that's a good bet to wear. There's no need to go overboard and bring dresses and suits, but the crowd will be rather stylish in a retro kind of way. Neat jeans, sneakers and a T-shirt are no problem, but try leaving the bulky hiking shoes in wintertime at home (they're also no good for dancing).

Basically, if you've just come down from a mountain hike or a ski trip, you'll need to change your outfit and put in a little more effort before going out.

Of course it depends on your taste of music, and what you are looking for in a crowd and atmosphere, and if you don't like disco music then this is probably not the right place for you. But for me it's perfect and hands down the best place in Reykjavík for a party - so let me explain why! 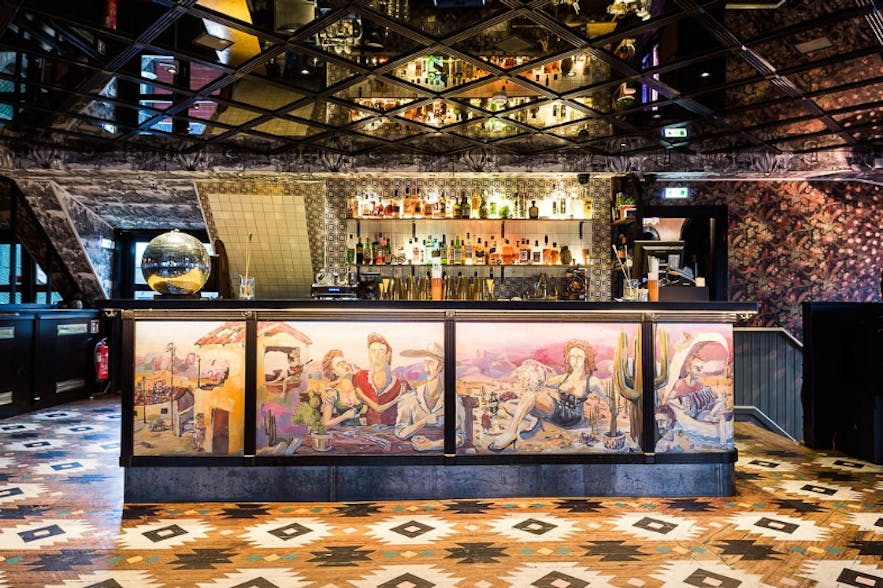 First of all, the setting and surroundings are colourful and fun. Even the name, Pablo Discobar, shows that the place is witty and doesn't take itself too seriously.

Right below Pablo there's the Latin American fusion restaurant Burro, one of the best restaurants in Reykjavík. Although Burro will play salsa and latin music and the playful South American feel extends to the top floor of the building where you'll find Pablo Discobar with its latin look, the music is definitely disco when you enter the top floor. Expect 70's and 80's recognisable disco tracks, but not necessarily the ones you hear all the time, so the music never gets tired.

The bold colours mix with wooden and mirrored ceilings and pelican decorations, as well as a large disco ball. There's a neon lit pelican on one wall, and beautiful latin tiles at the bar counter. Some might say it's tacky (and it is), but it's so tacky that it goes the full circle and becomes cool again.

The atmosphere is friendly and fun, even the bouncers are super friendly! I took some foreign friends here, and they were amazed at being greeted by two stocky men, wearing winter fur coats, that welcomed them with a smile and a 'good evening', rather than the usual attitude that's so prevalent amongst nightclub bouncers. (Loud, trouble-making groups might not be welcomed so politely).

The crowd is mostly in their late twenties, thirties and forties, and although a few tourists can normally be found here, it's also a pretty local spot, consisting of a pretty interesting and international clientele. It's not a large bar, the dance floor is small and there are just a handful of sitting booths, so you don't need a lot of people to make the place feel full.

There's a daily happy hour between 4 and 6pm, if you want to make the most of the great cocktails, but the place will be fairly empty around this time. There is actually also a bonus late happy hour on Monday and Tuesday nights from 11pm to 1am, that's definitely worth checking out if you feel like partying early in the week!

For a night out on a weekday it starts to get a little busy around 9pm, and on Friday and Saturday nights it gets really busy after midnight and the place gets packed, hot and sweaty with all that dancing going on.

And then there's the cocktails.

Ok, the cocktails are a bit pricey, and when you've gotten your third one you feel like your wallet is bleeding... but they're so tasty that you can't miss out on them! Not only are they tasty (and strong!), the bartenders also tend to put on a show when making them. Above is a shot from just a regular Saturday night out. 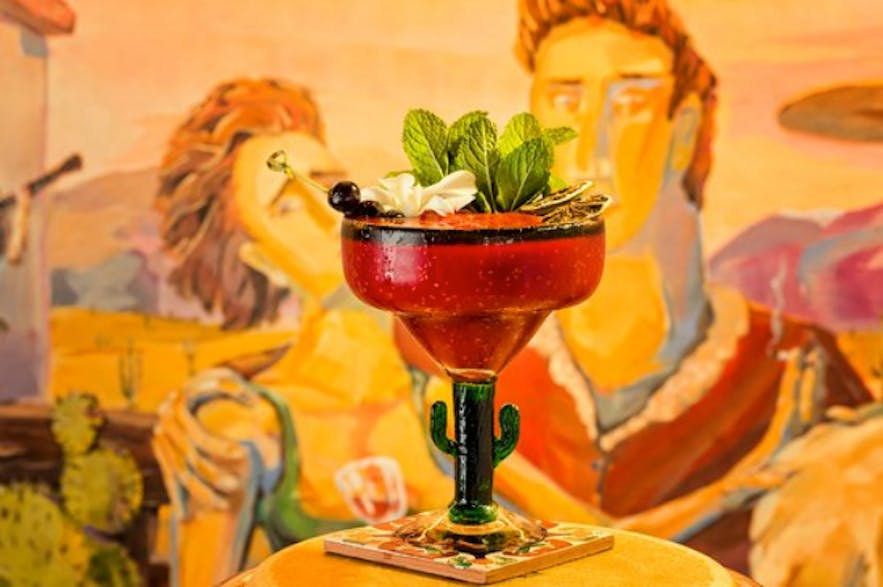 Probably the most famous cocktail they have is the one that uses Cocoa Puffs, but I've yet to try that one. All the ones I've tried (and that's a fair few) have been really great (I somehow seem to not remember their names for some reason...) And there's a good selection of tequila and mezcal on the bar, which are commonly used in the cocktails themselves.

I've actually had the most incredible cocktail experience of my life inside Pablo Discobar, when one bartender looked me and my friend in the eye the whole time while throwing glasses in the air, chopping a giant piece of ice with a pick whilst having flames thrown behind him.

So that's the kind of place you can expect. It's kitsch, it's tacky, it's old fashioned - and I love it. The bartenders look like they are all auditioning for the main role in 80's blockbuster Cocktail, and that old school, retro love shines through in the staff and their outfits. 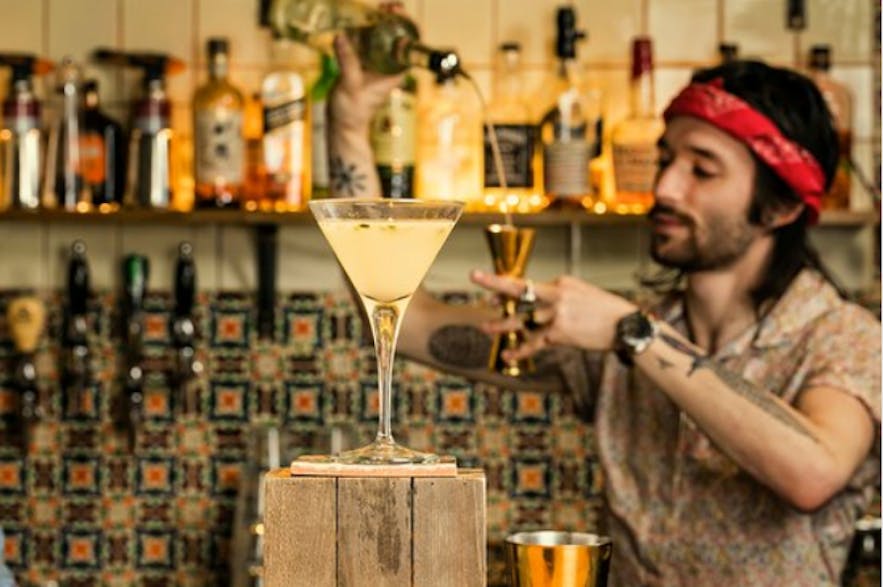 I've also had one of my best dancing nights out here, as I accidentally ended up in a dance off on a Thursday night to endless awesome disco tunes. And that's the absolute best bit. It's pretty much impossible not to start dancing to the beat here. And I love to dance. 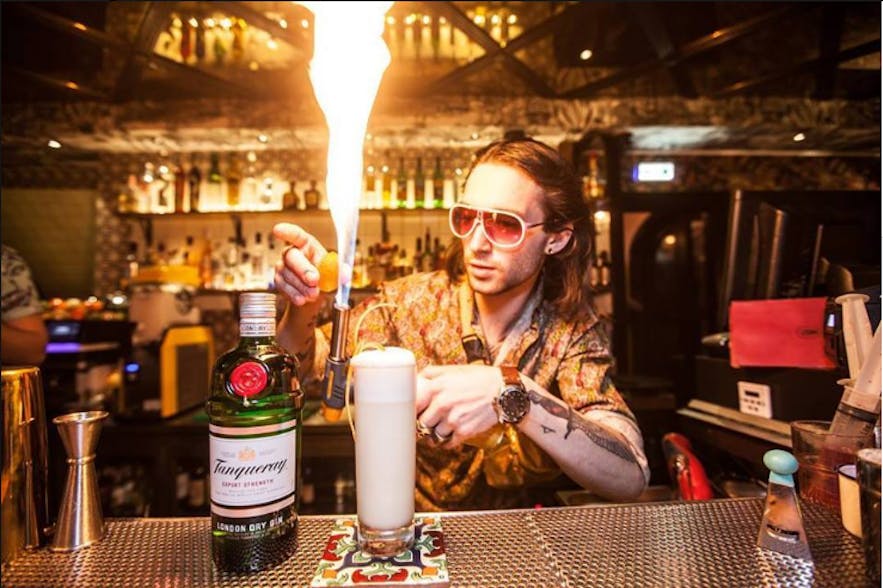 The word 'disco' shouldn't throw you off, as their DJ's are experts at spinning both 70's classics (and also more obscure songs) with modern pop songs that you didn't realise have a disco rhythm until you start busting Saturday Night Fever moves along with them.

So if you're looking for a night out filled with cocktails, dance and disco, then you know where to go!

If you want to skip the disco, but still get some of that colourful, neon lights 80's tacky feel, then the owners have just opened up a new cocktail lounge bar in town, called Miami. It's found on Hverfisgata street, and has a ping pong club in its basement. It's so new that I haven't been yet, but I'll be sure to check it out soon!

Pablo Discobar is on the third floor at Veltusund 1, 101 Reykjavík.
Happy hour is everyday between 16 and 18, and on Monday and Tuesday nights between 23 and 01.