Public breastfeeding is normal in Iceland!

Breastfeeding in public is not a big deal in Iceland. Turns out, other countries think it is a big deal.

Yesterday an MP in Iceland, Unnur Brá Konráðsdóttir, gave a speech at the Althingi Parliament. Another MP was giving statements on a bill that she put forward to which she had to respond. So obviously, she got up and responded. It just so happens that when she had to get up to respond, her daughter, who's six weeks old, was feeding. So she took her daughter along to the podium and breastfed her whilst addressing the parliament on live TV.

Breastfeeding babies is one of the most natural things you can do (we've all been babies, most of us did breastfeed, people have been breastfed since the beginning of time...) - so why is this kicking up such a fuss?

Icelandic MP breastfeeds in parliament during a debate. Everyone is chill about it. What would the reaction be in the US? #MicBrights

Since it happened, it's been covered on a number of websites and international media, with hundreds of comments on sites like Reddit.

It's not really kicking up much fuss in Iceland, since it's perfectly normal to breastfeed anywhere in Iceland (evident from the fact that no-one said anything against it in parliament when it happened). But, it turns out, this is considered to be the first time in history that a woman breastfeeds during a speech in parliament. A historical moment!

In Iceland this has only been met with positivity, people commenting on how beautiful it is. Except for the fact that she's talking about tighter controls on immigration, which takes away from the beauty of it. Thankfully, some people have commented on that as well.

Personally, I think it's great that she's doing her bit to normalise breastfeeding on a global scale - but absolutely terrible that she wants stricter immigration laws, which is sort of even worse seeing that she's breastfeeding her baby at the same time. It gives the idea that 'it's OK to live in Iceland if you're born here, otherwise not'.

I personally think that Iceland can and should accept a lot more immigrants and refugees than it already does. It will help the country in so many ways. I myself have been an immigrant in a number of countries, always because of my own free will and not because I've been scared for my life at home. But it seems that it's OK to be an immigrant from certain countries but not from others. There is almost no worse word than the word 'ex-pat' - because it's just a 'fancy' word for an immigrant. Being an 'ex-pat' indicates that you're rich and white and fancied living in another country than the one you're born in.

Immigration and a multicultural society is helpful to build stronger societies where people have a strong sense of empathy and understanding. Iceland's current, and previous, First Ladies are both immigrants - should we kick them out? The current one, Eliza, is Canadian, the previous one, Dorrit, is from Israel/Palestine but raised in Great Britain. If they were from Syria would we then want to deport them? Or if they were muslim? No. Of course not. 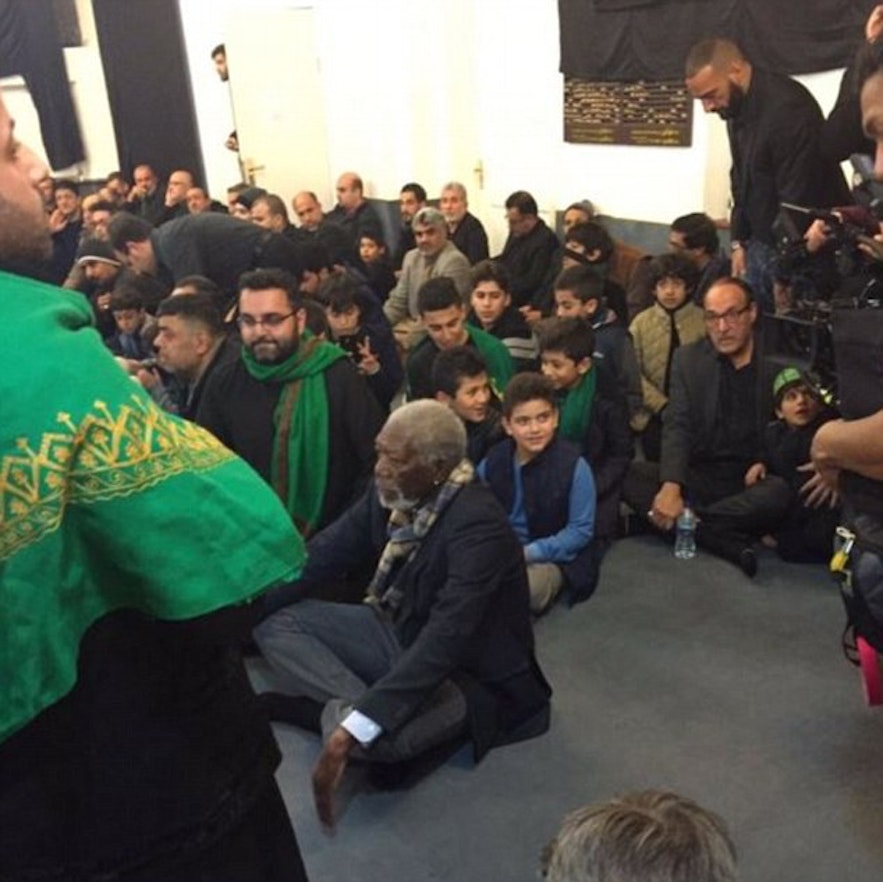 Morgan Freeman attended a service at a mosque in London yesterday to support the peaceful Muslim Holy Day march. Picture by DailyMail.

My immigrant boyfriend in Iceland, who's from the UK, only misses one thing from London: Seeing the rich multiculturalism every day. He complains that there aren't any places where he can get Jamaican curry, and he misses seeing people from Ghana dressing up in their colourful Sunday Best clothing on their way to church.

By the way, neither of us is religious, so it's not the churches themselves that we miss - just the variety of people of all races and religions.

We used to live in Deptford, a neighbourhood in London where there is a large African community and a varied market with products from all over the world. I'm currently in London, and at the same time that this Icelandic MP was breastfeeding her baby at work, I witnessed a peaceful march of thousands of muslims walking down Oxford Street in central London. Unfortunately it doesn't seem to be getting as much coverage.

However, most people outside of Iceland are probably unaware of what this MP is talking about, and are only commenting on her breastfeeding. I. Just. Don't. Get. It.

Can a woman not even be listened to when she's an MP, speaking at parliament, because she is also a mother with (gasp!) breasts that serve a purpose? All mothers do - but can we please listen to what they are saying instead of focusing on something that doesn't really matter? Because we should be debating her bill, not debating her breast!

I've been reading some comments on some of the news sites - people saying that this is totally unnecessary, or that she should do this in private, or that the baby should have the comfort of being fed in privacy - one person even saying that this is a staged feminism act that was totally uncalled for and unnecessary. Seriously? Have these people ever met any children? Do they have children of their own?

Ok, so first of all - I'm not a mother. Nor do I want to be a mother. This isn't a 'I'm a mother, allow me to breastfeed in peace' rant. It's a 'basic rights for all human beings' rant.

Giving birth to a child just doesn't appeal to me (unleash the 'you are not a real woman' and 'just wait until you're older' comments). BUT, if I was a mother, I would totally breastfeed my kids!

The milk is supposed to have all the best nutrients for the kid, plus, it's for free! Having a kid is an expensive business, you need to invest in all sorts of things - prams, clothes, babysitters, other kid things... at least you can feed them for free for the first few months. And you always carry the milk with you, no chance of forgetting it at home!

Babies are generally happy when they're clean, fed and have had some sleep. So, in this MP's case, she's got a really relaxed baby girl that doesn't cause any trouble. She's been bringing her into work (which happens to be the parliament) for a little while and she never makes any noises or disturbances.

It was probably just a question of time when she'd have to stand up with her baby to make a speech. (Why she's already back at work so early after giving birth, I do not know, surely she should be on maternity leave?) If she would've had to interrupt her breastfeeding, then the baby would've probably gotten upset and started crying - upsetting the parliament and causing the MP to need to exit the room.

Iceland is a pretty relaxed country.

Leaving your kids in a pram outside cafés is normal.

Leading your own life even though you have a family to take care of is normal.

Bringing your kids with you to work is normal.

Showering naked amongst strangers before entering swimming pools is normal. Read more about getting naked in Iceland here.

Being topless whilst sunbathing is normal (both for guys and girls). Read about Free the nipple in Iceland here.

Stay-at-home dads are equally normal to stay-at-home mums - but neither is very common. Most people work - and have families. They just make it work together somehow, such as by being allowed to bring their kids in to work from time to time.

Breastfeeding in public is normal. 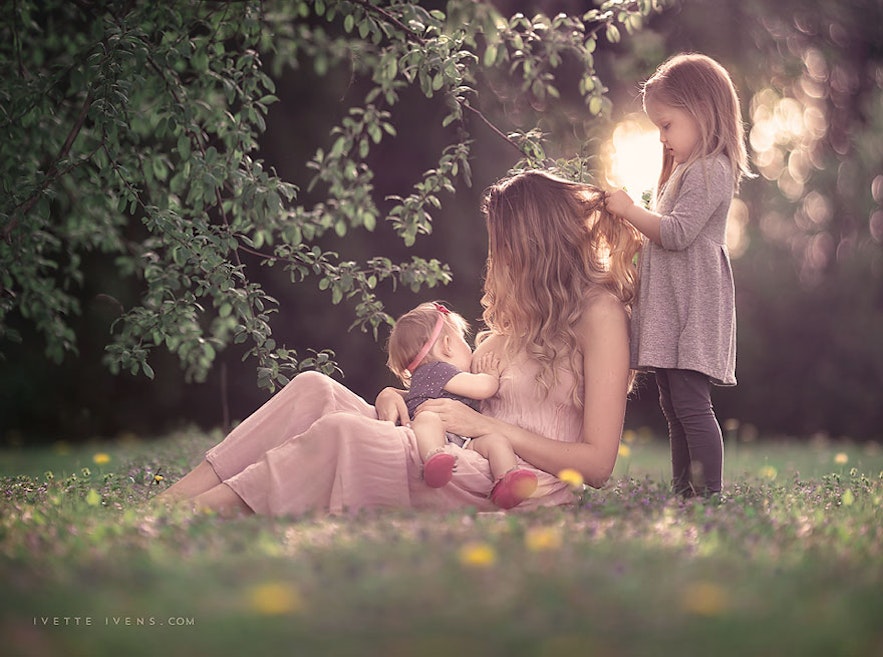 Through the years I've had a few friends and a number of family members that have given birth to children. Breastfeeding has taken place in Christmas parties, family gatherings, café meet-ups with my friends and at work. It's really not that big of a deal.

Most times you don't even see the breast (in case someone is turning this into a 'sexual' thing, which it is clearly not). The baby's face is covering it. Also, it's just a boob, that's not on display in a sexual content. It seems to me that people don't make half as much of a fuss when boobs are seen in sexual contents (or in fashion), are guys upset because women are de-sexualizing breasts? Is that it? In which countries is this such a big deal? It's an issue in the USA, I know that - where else?

Hollie McNish describes this in the best way:

Can we all just stop focusing on this non-event - by giving it so much focus and attention it's making it stand out as something unnatural (and we'd like to keep it as natural as it is in Iceland!) - and instead, can we put more focus on what she was actually debating?