If you're driving along the south coast of Iceland then you pass a few impressive glaciers, but you'll also mainly be driving along some long flat plains of Mýrdalssandur (with the occasional mountain popping up from nowhere, such as Hjörleifshöfði). The glaciers are obviously covered with thick ice and snow, making them rather flat on top.

So when you head further east and drive past the town of Höfn, it's a great contrast to see the Horns, with a capital H, of the eastern Icelandic mountains. The word 'horn' means exactly the same in English, as the mountain's spiky peaks strut out of the landscape like horns on a bull. Vestrahorn means West Horn, Eystrahorn means East Horn and Brunnhorn means Well Horn ('Brunnur' means a well, like in a wishing well). Whoever said that the Icelandic language was difficult? 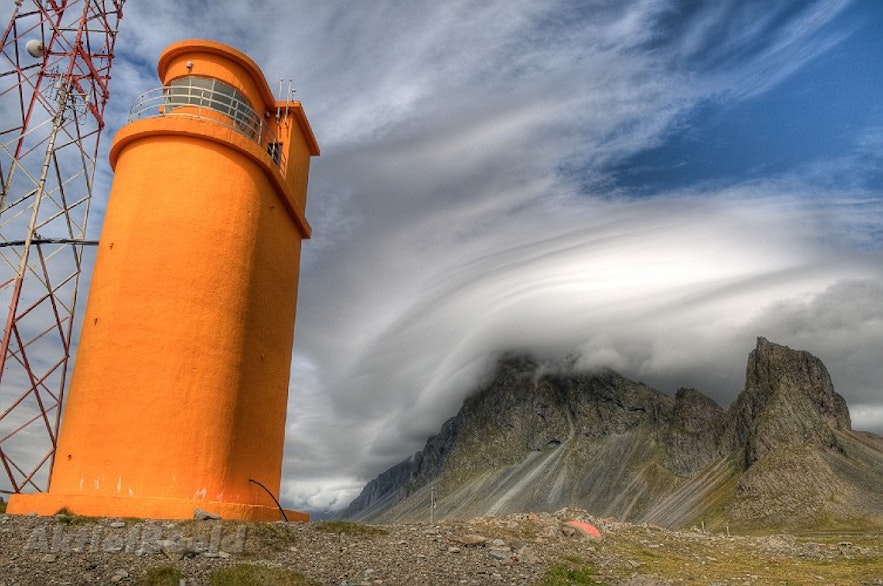 Hvalnes, or 'whale peninsula', is a small peninsula with a black pebble beach that stretches on for a few kilometres. Sitting on its tip is a picturesque old, yellow lighthouse and an old turf farm with the same name of Hvalnes. 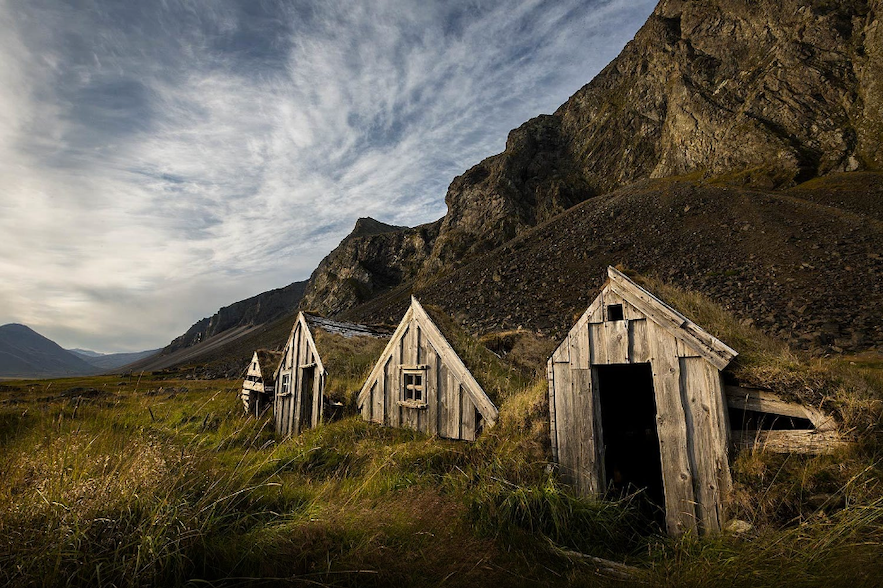 This peninsula connects all the three horn mountains, with Vestrahorn and Brunnhorn mountains on the western side of the beach, and Eystrahorn mountain on its eastern side - logical, right? ;) 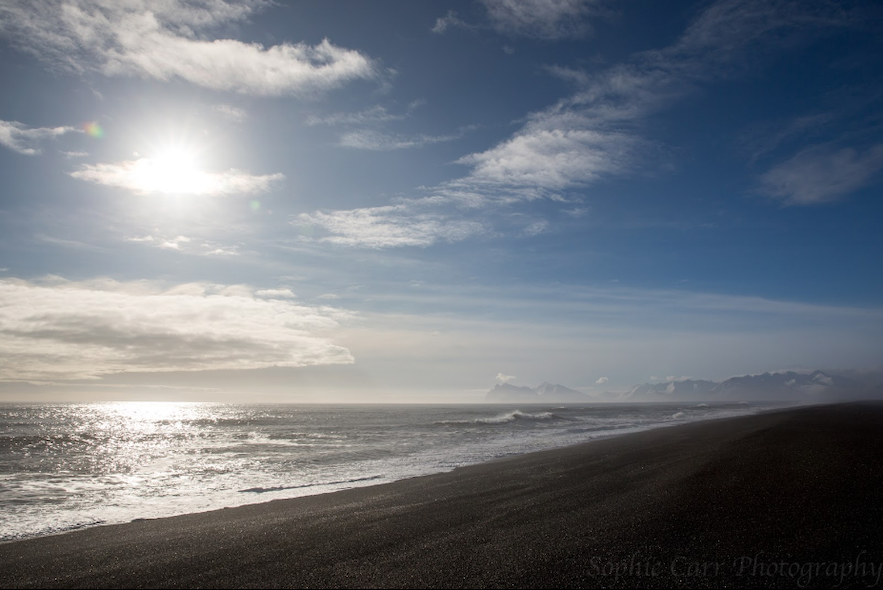 The beach stretches for a few kilometres, with water on both sides that mirrors the surrounding mountains on calm days. It is an excellent location for bird watching and photography, and there are great possibilities of getting mirrored shots of the impressive mountains on each side, or of the Northern Lights reflected in the water. 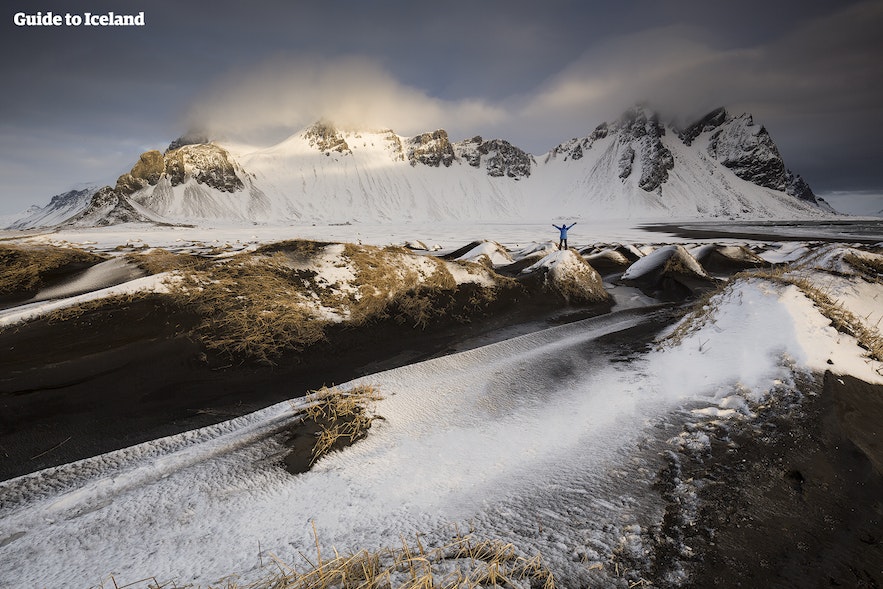 Vestrahorn mountain has been getting a lot of photographic attention in recent years. It's even served as a backdrop in the Bollywood film Dilwale, and the surge in photography enthusiasts driving the small road of Stokksnes to get to it has resulted in the farmer that owns the land charging a small fee to use the road to go to it, making it one of only 2 natural attractions in Iceland that you need to pay a small entry fee to reach. (The other one is Kerið crater in south Iceland, a part of the Golden Circle). 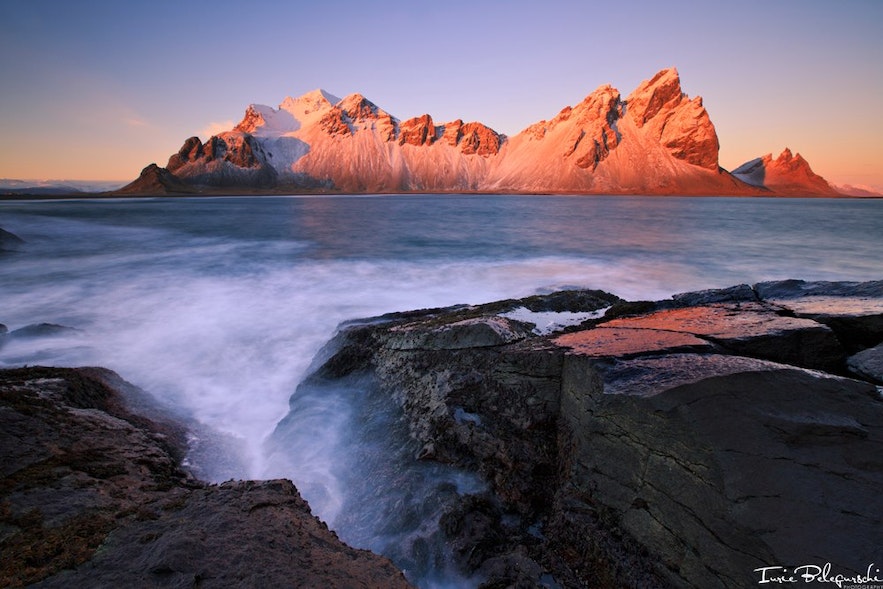 Vestrahorn is a 454 metre tall scree mountain, mainly made up of gabbro and granophyre rocks. The Stokksnes peninsula on its west side locks in seawater by the land, so it's possible to get some great shots of the mountain mirrored in the calm seawater, that's almost like a big lagoon, but varies in size with the tide.

Seals also tend to hang out on the stretch of sand, so if you're lucky you can catch a picture of a lazing seal as well. 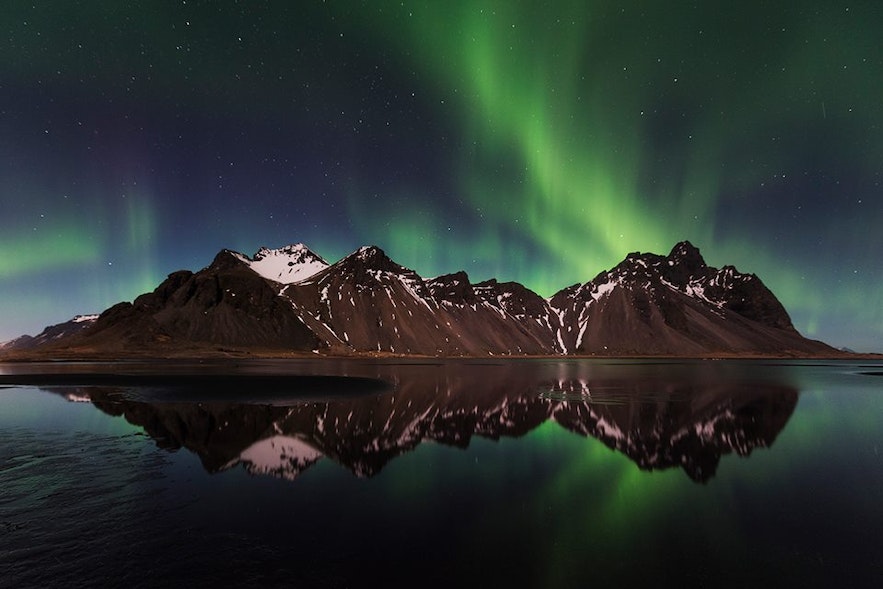 Vestrahorn, along with Kirkjufell mountain in Snæfellsnes on the west part of Iceland, is probably the most photographed mountain in Iceland. 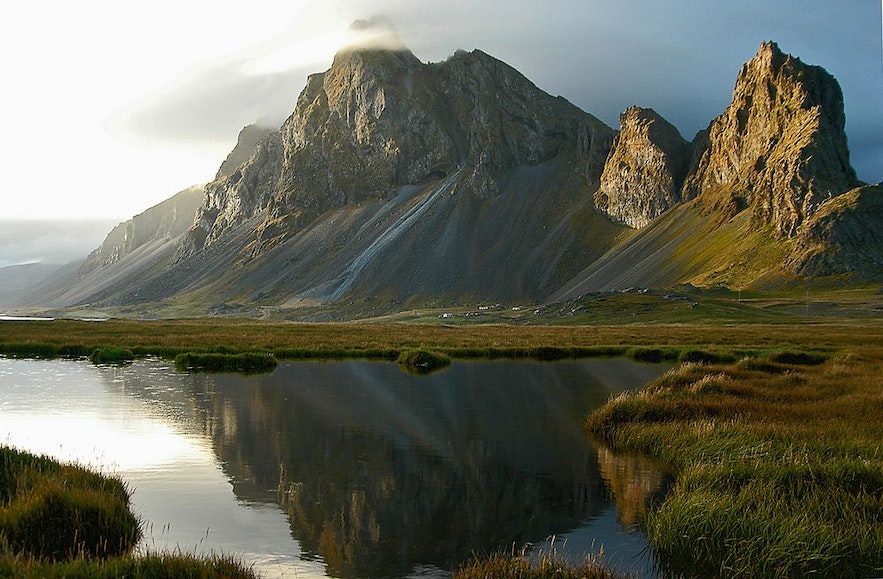 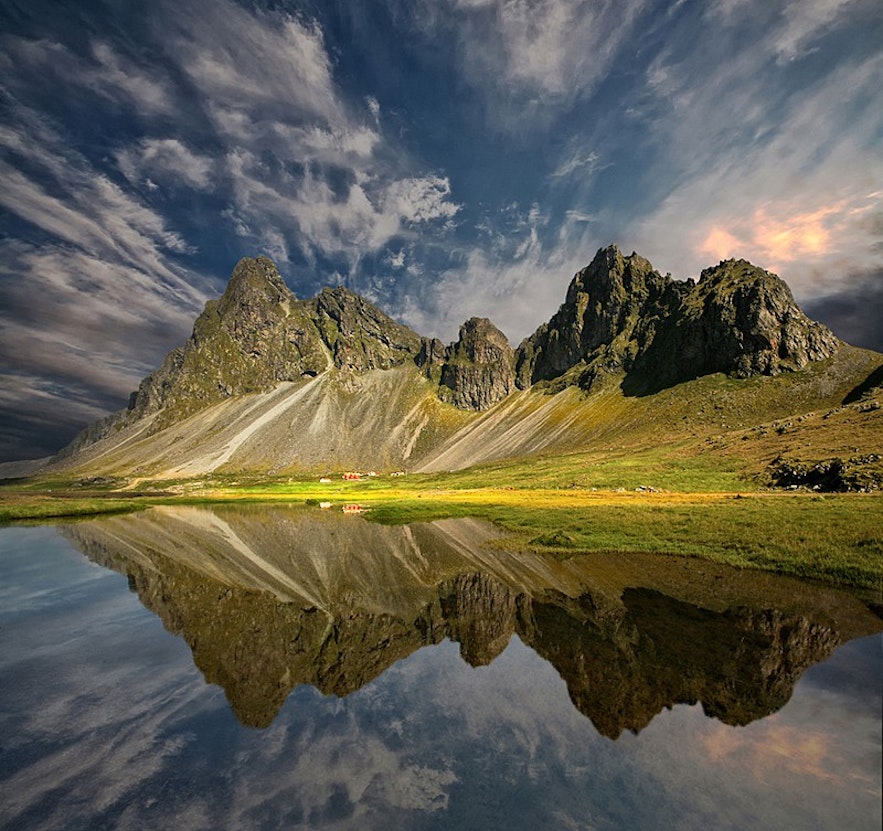 The mountain is only 756 m tall, and like its neighbour it is mainly made of gabbro and granophyre rocks, although some gold, silver and mercury have also been found here.

It's a very steep scree mountain, that's hard to climb. The problem with scree mountains when you try climbing them is that you take one step up, but slide two steps down.

An interesting fact is that Eystrahorn mountain used to be called Hvalneshorn - and then Vestrahorn mountain was called Eystrahorn. I'm not sure when the names changed, but in case you're a bit confused about the names of these two different mountains, then you can feel safe knowing you're not the only one! 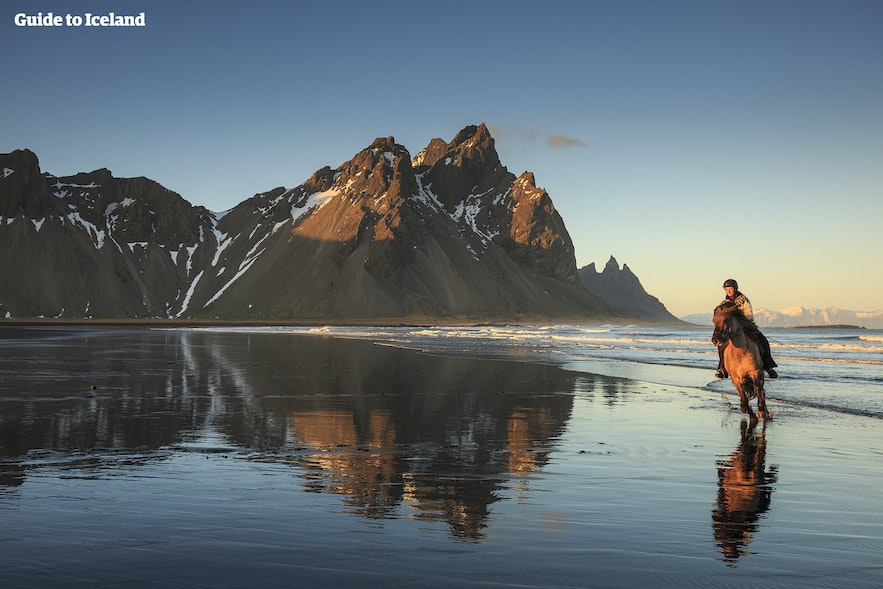 Right next to Vestrahorn mountain, or behind it, depending on which angle you're looking at the mountains from, is Brunnhorn mountain. On the above and below pictures you can see it on the right hand side, the three peaks that look like Batman's logo. This mountain is affectionately called The Batman Mountain by locals, due to its shape. 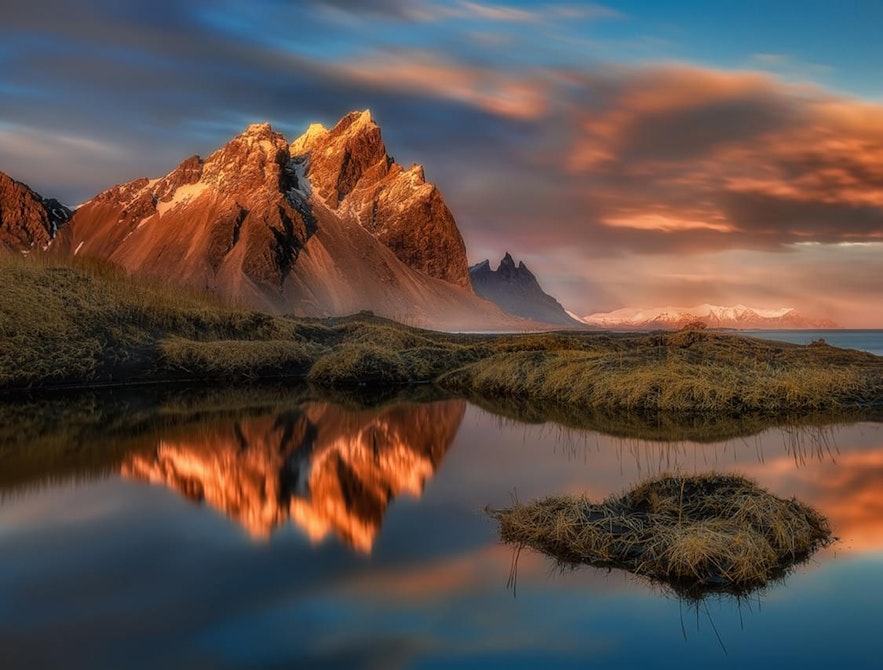 When you drive further east away from Vestrahorn, then you'll need to look behind you to see these impressive towers, that disappear from sight sometimes on the windy road. You get a much clearer look of this mountain when looking at it from the east. 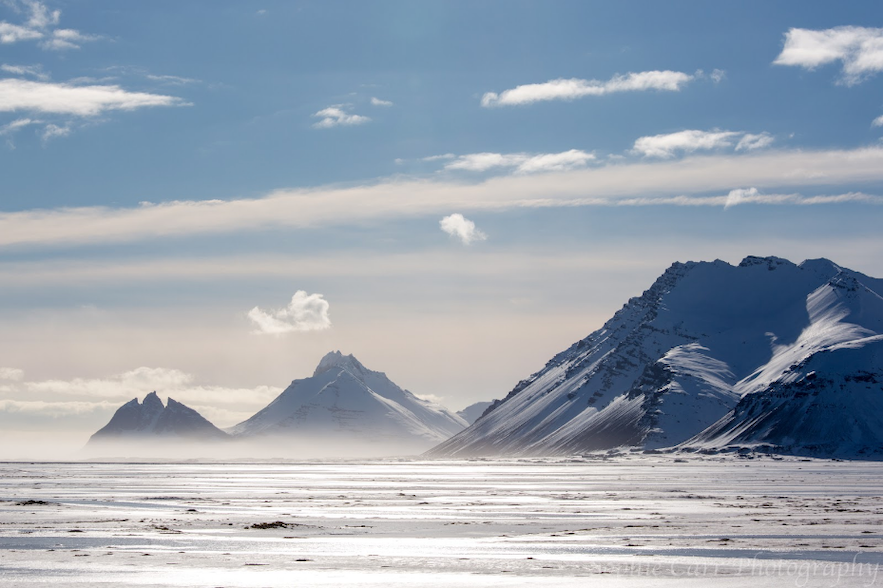 There's definitely no shortage of powerful and impressive mountains in the east of Iceland, and I can't think of a better place than to go on a road trip than exactly at this location, especially on a calm and pretty summer's day. Not that many people travel in east Iceland as well, so you're much more likely to find some solitude there, and maybe even a hidden gem all to yourself.

Do you have a favourite mountain in Iceland?