And the sign below reads "don't drive fast or no speeding". 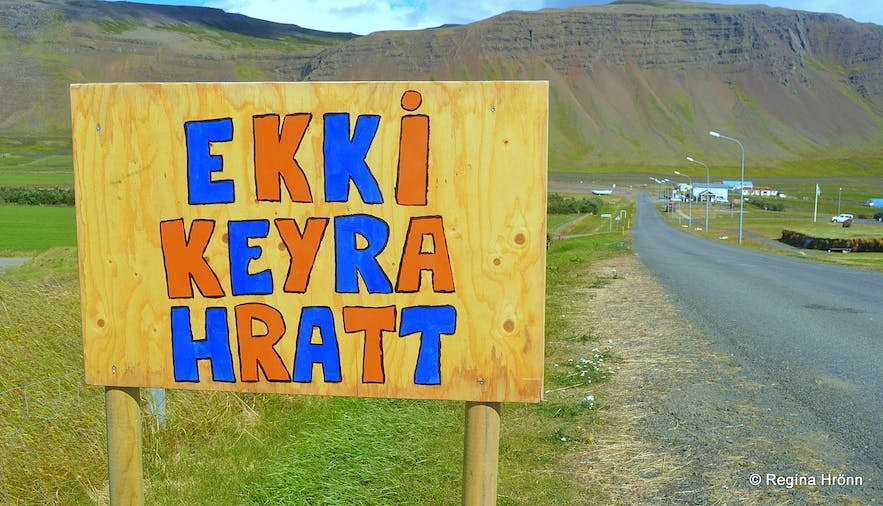 This is my 3rd travel-blog in my 3-part series on Reykhólar, where I had such a lovely stay. The other two travel-blogs are

A lovely 3-Day-Stay at Reykhólar in the Westfjords - Part 2 - the Seabaths. 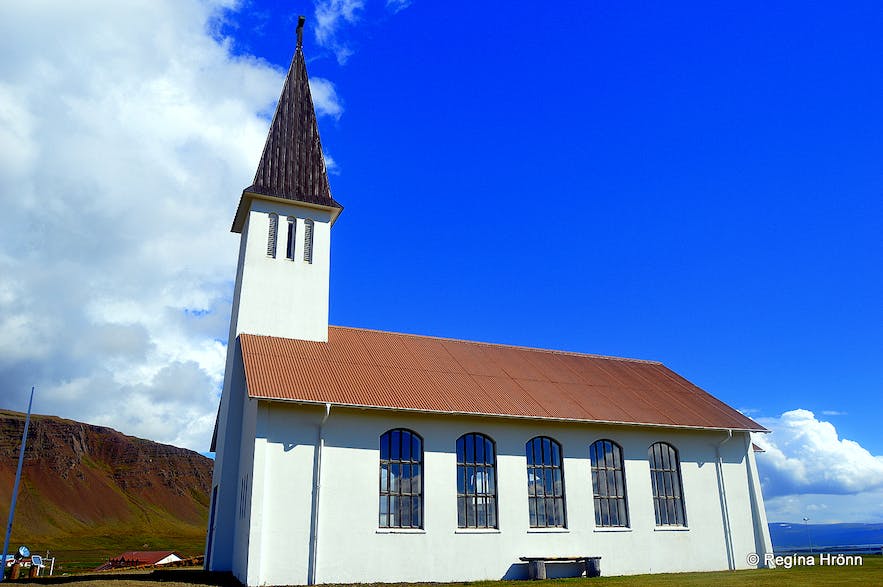 Reykhólakirkja church is the landmark of Reykhólar, where it stands tall on the hill where the old Reykhólar farm was once located. It is tastefully decorated Lutheran church, consecrated in 1963.

The church was open when I visited it, I guess the minister was in his office. But an incomprehensible incident took place in this church in May 2016 when 2 tourists had used this beautiful church as their place to sleep and had even cooked food in there - in a church with panelling and all this beautiful woodwork inside! 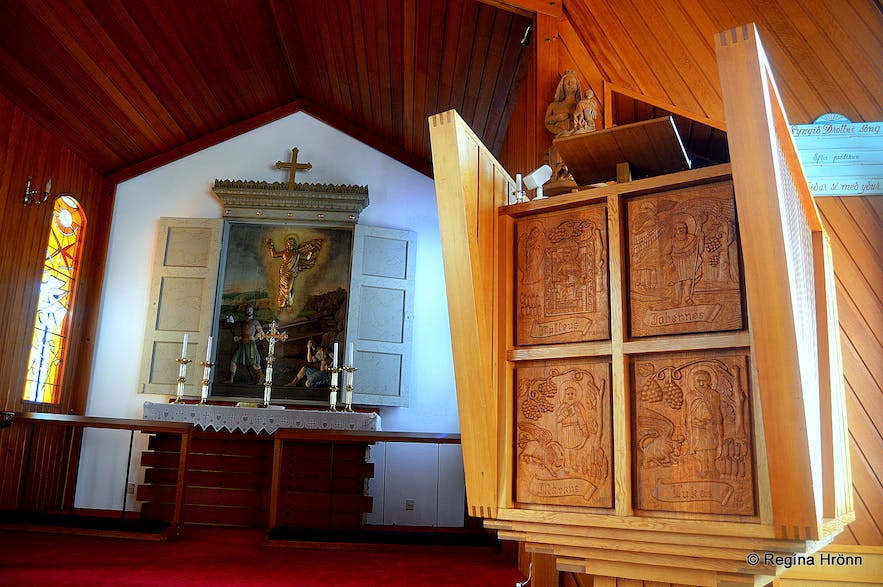 They were told to leave in the morning but didn't seem to understand that it was not OK to sleep and cook in our place of worship. Since this incident, Reykhólakirkja church has to be closed and the inhabitants regret having to do so as this church is the focal point of social activities and worship in this area.

This was the second time such an incidence took place in Reykhólakirkja church. Earlier this year (2016) when the minister went to work at the church she found tourists sleeping on the pews. They had cooked and even washed their clothes in the church! This makes me both sad and raving mad. 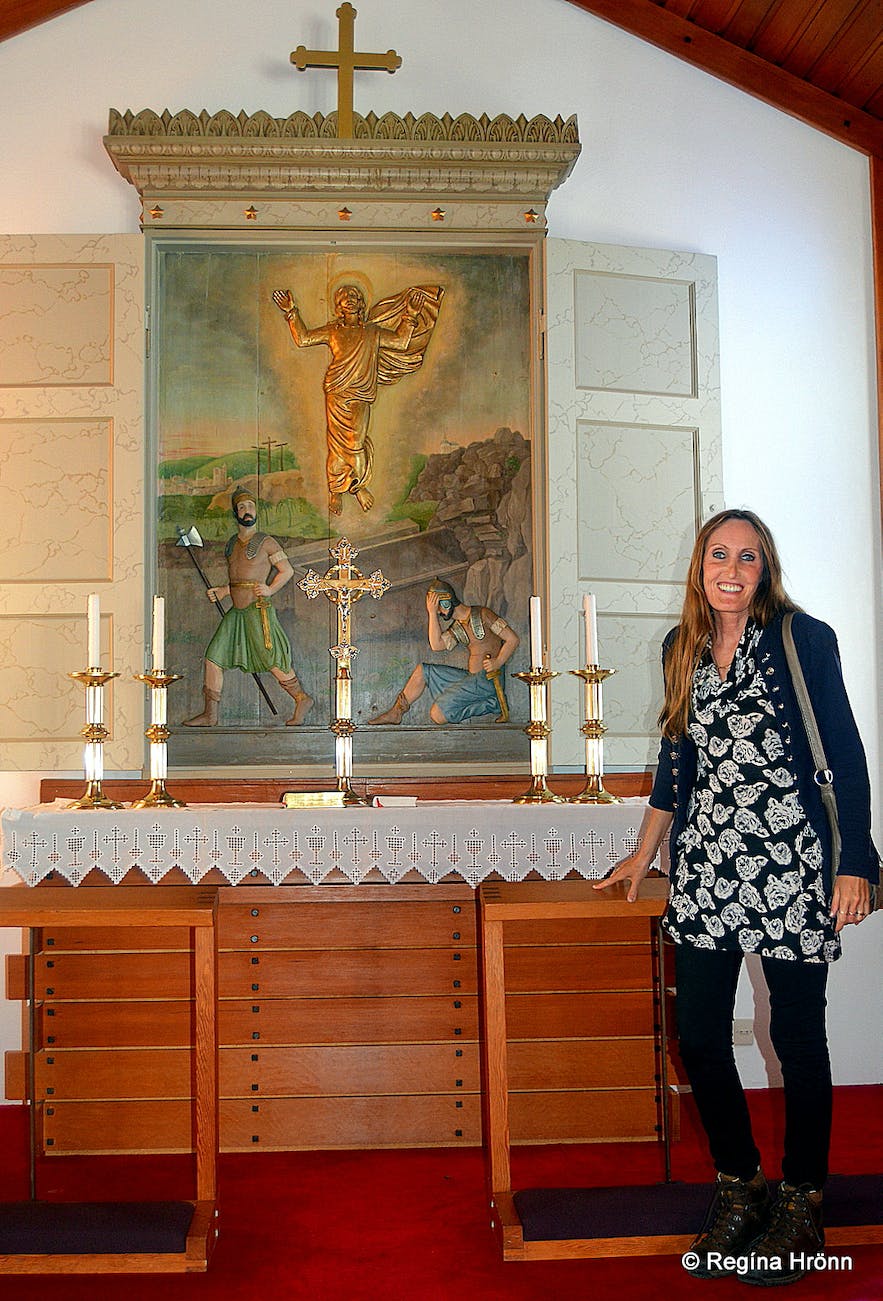 So my plea to those who don't realize the importance our churches have to us: "Please respect our churches, they are holy to us and our place of worship".

I visit every church in Iceland on my travels in my country. I go in and pray and admire these beautiful churches, which to me are like gems scattered around my country.

The Monument for Jón Thoroddssen 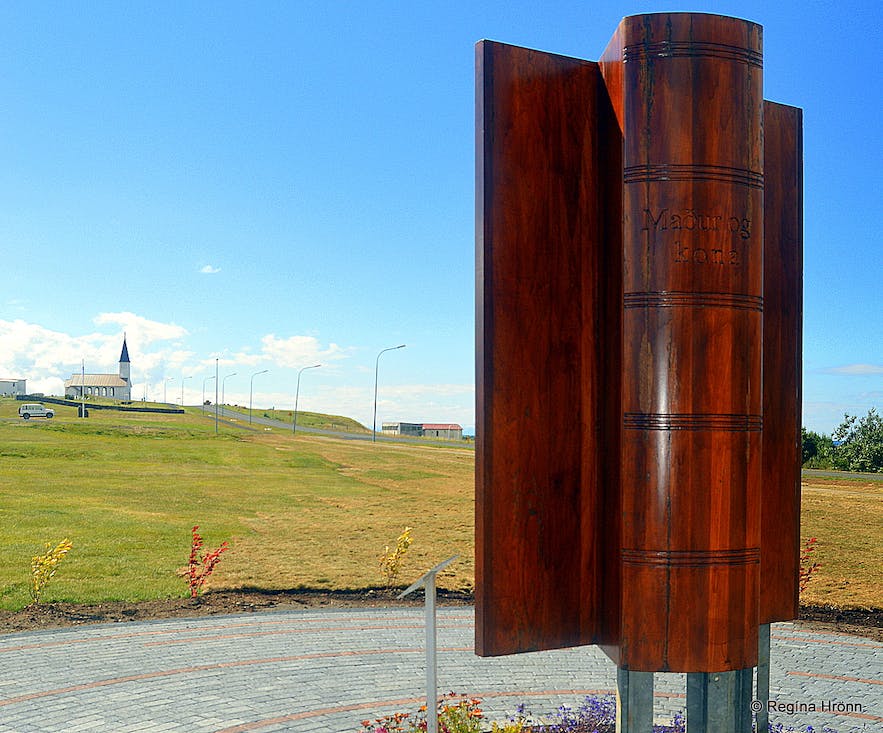 One of our beloved poets, Jón Thoroddsen (1818-1868) was born here at Reykhólar. He brought the beautiful altarpiece in Reykhólakirkja church home with him from Denmark by a request from his mother.

Jón studied law in Copenhagen and worked for a time as the district judge of the southern part of the Westfjords. The altarpiece is by Lövener, painted in 1834.

You will see a noteworthy monument in Reykhólar - a huge wooden book. This is a monument in honour of the poet Jón Thoroddsen. 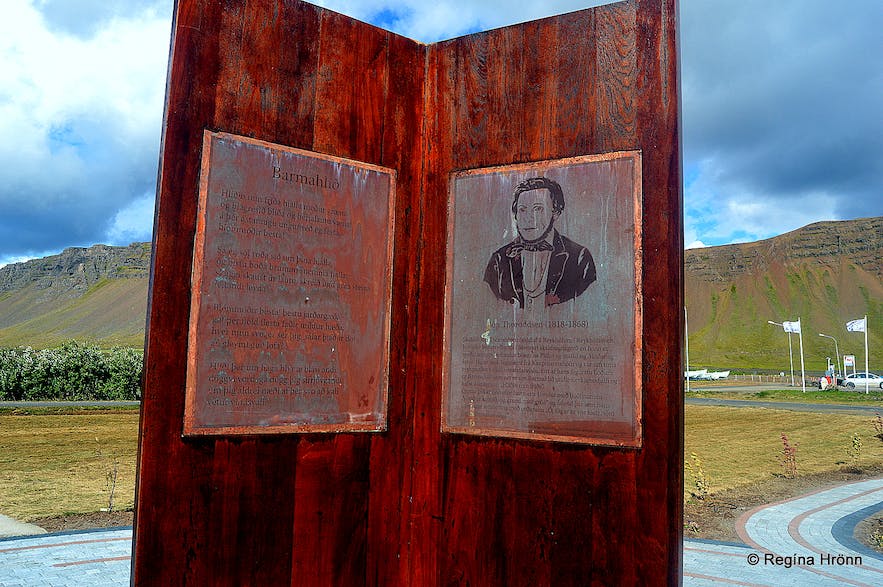 Jón was a pioneer in novel writing in Iceland and is often called the Father of the Icelandic novel. His novel Piltur og stúlka (1850) Lad and Lass, is the first Icelandic novel.

Jón Thoroddsen was also a well-known poet, and we learnt some of his beautiful poems by heart at school.

The Girl from Reykhólar - Icelandic Folklore

"Centuries ago some people at Reykhólar went to pick some Iceland moss (fjallagrös) in a mountain. A thick fog suddenly appeared as they were picking the moss, and one of the girls in the group disappeared into the fog. She was lost for the whole summer.

A sorcerer was asked to find out about the girl's whereabouts with sorcery and get her back. The sorcerer succeeded in retrieving the girl and when the girl was back home, her employer the minister never let her be alone, but once it so happened that she was sent to the church.

In a short while, her employer looked for her as he suspected some things, and as he entered the church the girl was gone;  the minister looked around and saw a man in a red tunic riding away on a horse and the girl was sitting behind him on the horse. 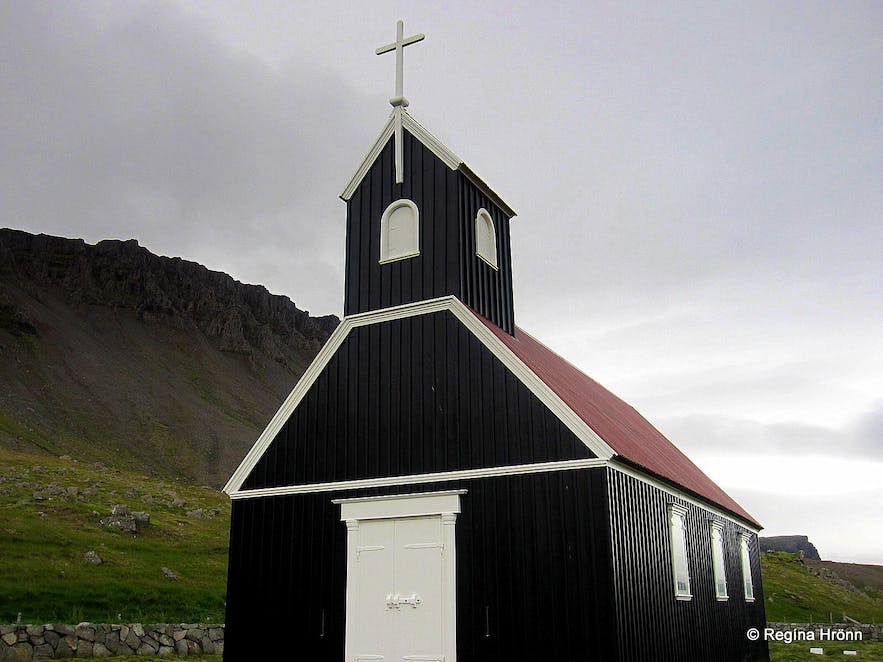 Time passed and nobody knew anything about the girl's whereabouts, but once the minister's wife at Reykhólar dreamt the man who had taken the girl away.

That man gave the minister's wife regards from his wife with the instructions that a child, who she would find lying in a crib in front of the church door when she woke up, should be christened - and the minister clothing on top of the crib should be a payment to the minister for the christening.

The minister's wife woke up and everything was as the hidden man had shown her in her dream;  the crib was found in that specific place with the child in it - and on top of the crib was the rich clothing for the minister and a linen gown. 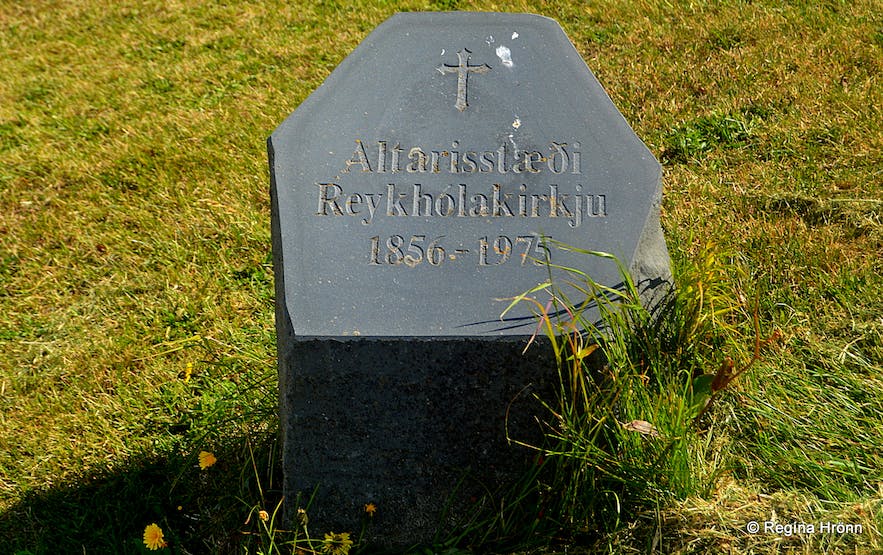 The new Reykhólakirkja church is now located on the spot where the old Reykhólabær farm used to be. 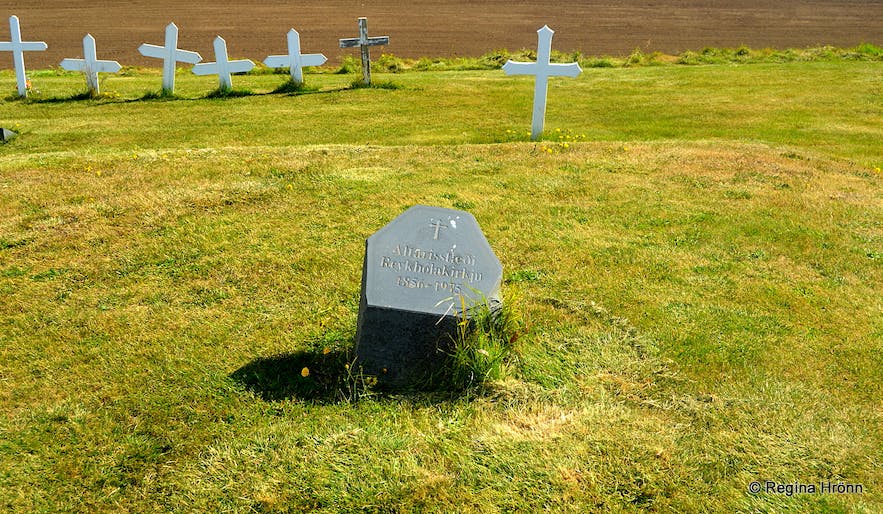 The old Reykhólakirkja church was built in 1856 and in 1975 it was moved to Saurbær in Rauðasandur. I have visited that old church at Rauðasandur, it is a lovely old black timber church with a red roof. You can see it in the photos above.

Just outside the Reykhólar cemetery walls, you will find an old grave. On the gravestone is written: "Tumi Sighvatsson D. 1244 "Sagður liggja hér"" which means that Tumi Sighvatsson, who died in 1244, is said to be buried here. 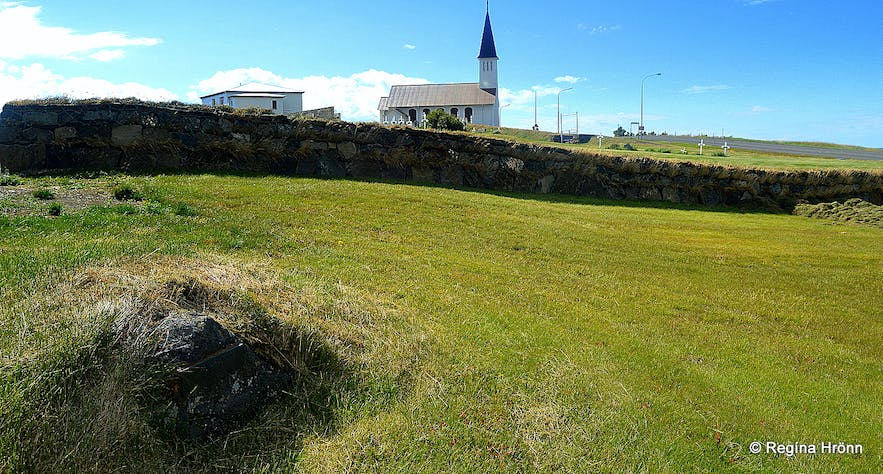 Tumi Sighvatsson the younger (1222 - 19th of April 1244) was a member of the well-known Clan of the Sturlungs, which was one of the most powerful families in the Age of the Sturlungs. This period of time (42-44 years all in all) was the bloodiest in Iceland's history, with Viking clans fighting each other.

Tumi was the son of Sighvatur Sturluson, making him the nephew of the head of the Clan of the Sturlungs - Chieftain Snorri Sturluson himself.

Tumi fought in the biggest Viking battle in Iceland - the Örlygsstaðabardagi battle in the year 1238. In this gruesome battle, he lost his father and 4 of his brothers, but Tumi was able to flee from the battle to Eyjafjörður fjord. The chief of the Clan of the Ásbirningar, Kolbeinn ungi (the young), didn't bother following this 16-year-old boy. 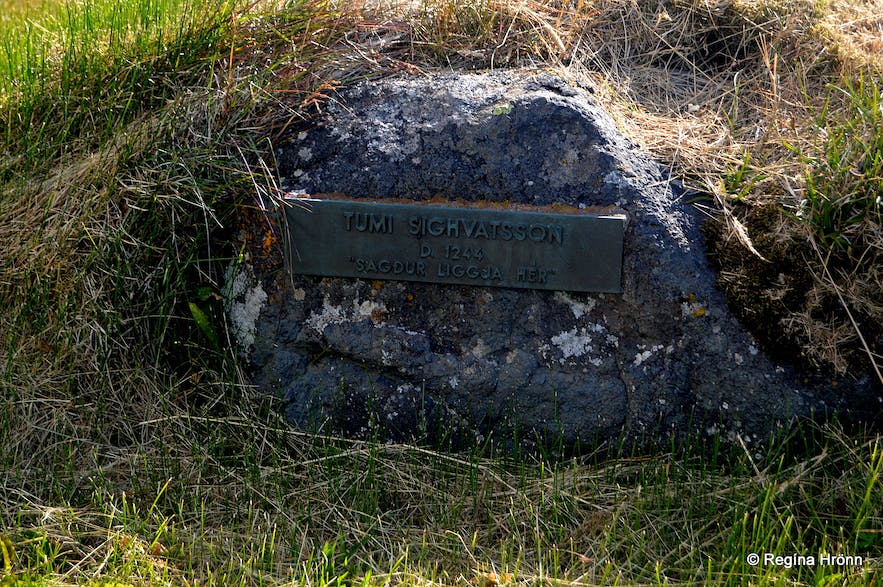 Six years later Tumi was at Reykhólar in the spring of 1244 and there Kolbeinn ungi captured him and killed him (I have read that he was beheaded). Tumi was by then only 22 years old. And here this young man lies in this inconspicuous grave outside of the cemetery of Reykhólar.

Báta- og hlunnindasýningin - the Boat and Gift of Nature Exhibition 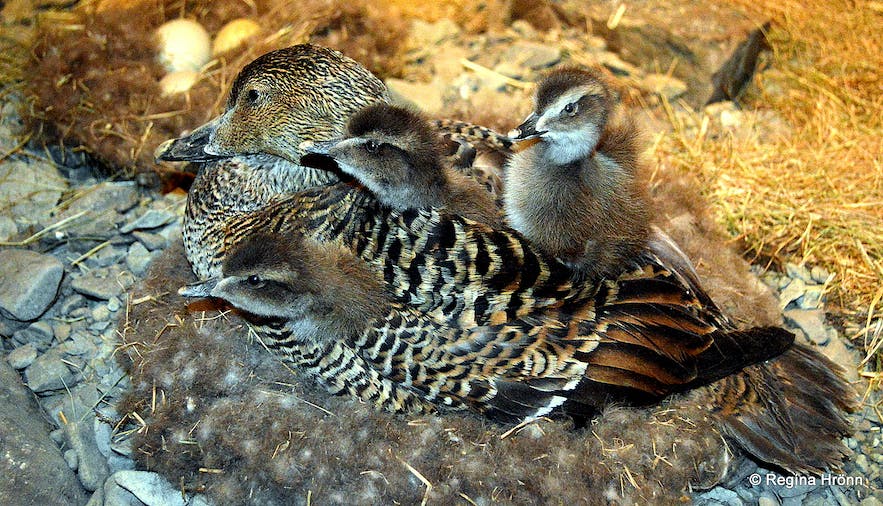 The museum in Reykhólar is called Báta- og hlunnindasýningin or the Boat and Gift of Nature exhibition. Reykhólar is a settlement farm, meaning that the Vikings settled in this area back in the 9th century. The Vikings who settled at Reykhólar obviously knew what they were doing as this land (and sea) is filled with gifts of nature (perquisite) as it were.

The exhibition at Reykhólar shows which gifts of nature are found in this area - the landowners got plenty of riches from their land here. These gifts of nature were of great value in the olden time and being able to fish in lakes on your land and from the ocean, pick eggs and get eiderdown from the female eiders was invaluable - just to name a few of the extra resources of this land. 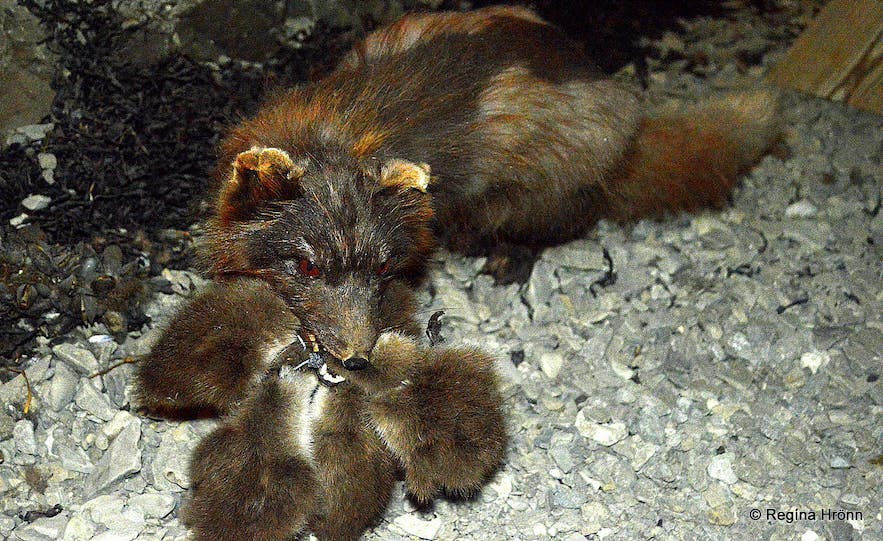 Egg collecting, fowling etc was of great help to those who had to survive the harsh winters in Iceland - back then there were no grocery stores and they literally had to live from the land.

Also, those who were living close to the sea, as they were here in Reykhólar, were able to catch fish and hunt seal for food and use sealskin for warm clothes. 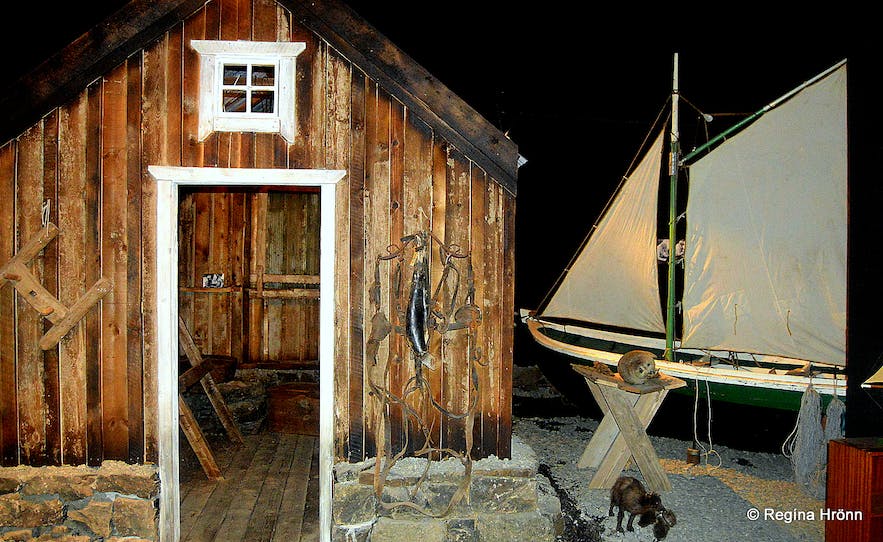 The Boat and Gift of Nature exhibition is an eye-opener as one realizes how much people in the olden days relied on nature and the wildlife for their livelihood - do pay this exhibition a visit to get to know how people survived in Iceland through the centuries.

The exhibition is open during the summer months, but it can be open by appointment in the wintertime.

Now that I have shown you around Reykhólar I want to tell you that there is a grocery store at Reykhólar called Hólabúð, with a wide variety of food.

Do stock up on food for the day at this store, as if you are heading west the next supermarket is in Patreksfjörður village, 172 km (2 hours) away. You will also find a restaurant in Hólabúð. Quite nice and my husband had his meals there during our stay.

Unfortunately, Hólabúð closed down in 2020. But new owners will be opening the doors for business in the spring of 2021 with a new store name. 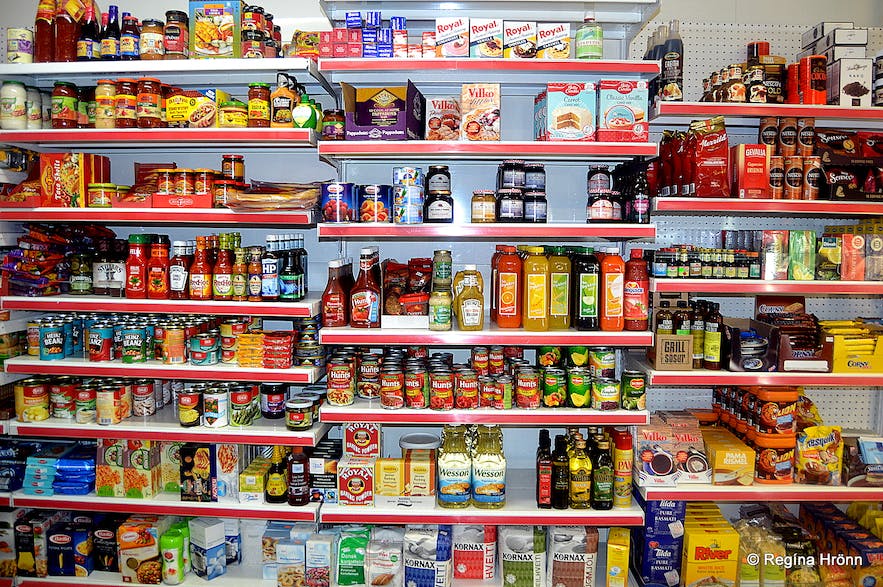 Just a couple more things - there are two places in the vicinity of Reykhólar which I would like to mention. There is an authentic turf house, Barmar turf house very close to Reykhólar. It is the only original turf house left in the Westfjords, in which people lived.

There are some outhouses made of turf left and in the remote Kollsvík, I found the oldest outhouse in the country, dating back to 1650. 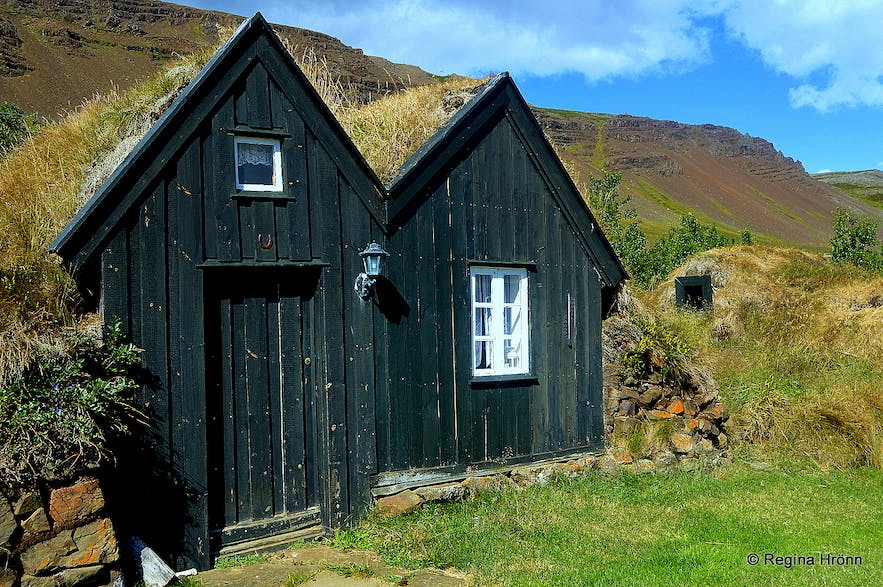 Seeing that I am searching for all the turf houses left in my country then I was thrilled to see the beautiful turf houses at Barmar. In 1925 Barmar had become dilapidated but was restored to its original form in a week by the owner and his neighbours. In 1967 Barmar turf house was abandoned.

A new owner put a lot of work, time and effort into restoring this beautiful turf house with the help of professionals - kudos to them for a job well done. Barmar is privately owned and thus it is not possible to visit it unless you ask for permission.

But it is possible to take a peek at the turf house from above from the road, as you can see on my photo above. 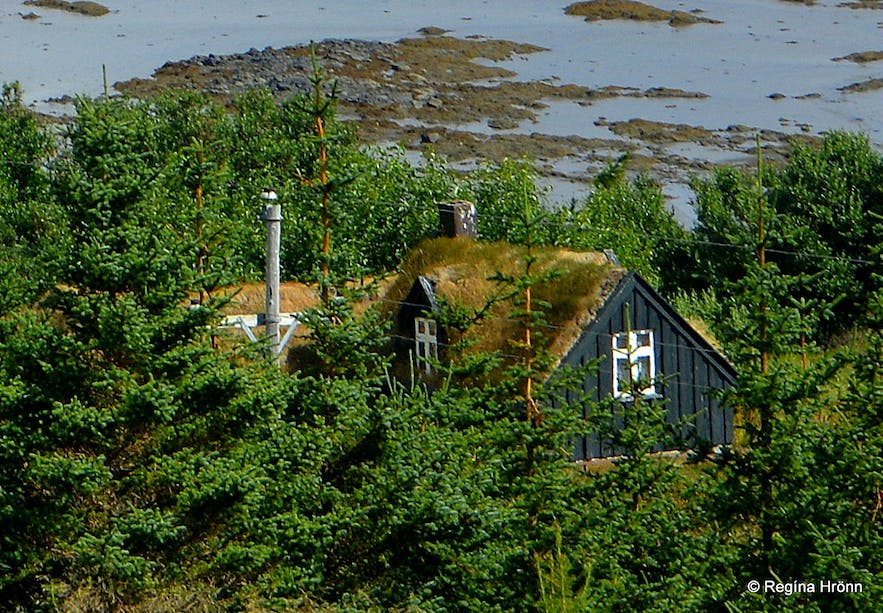 The turf houses are our national inheritance, and I am very fond of them.

On my travels in Iceland, I don't only look for turf houses, but also for elf locations. In the vicinity of Reykhólar seemingly there is the market town of the elves. I hiked for an hour to get to it and found the most beautiful rock with basalt columns called Bjartmarssteinn on which I have written another travel-blog: 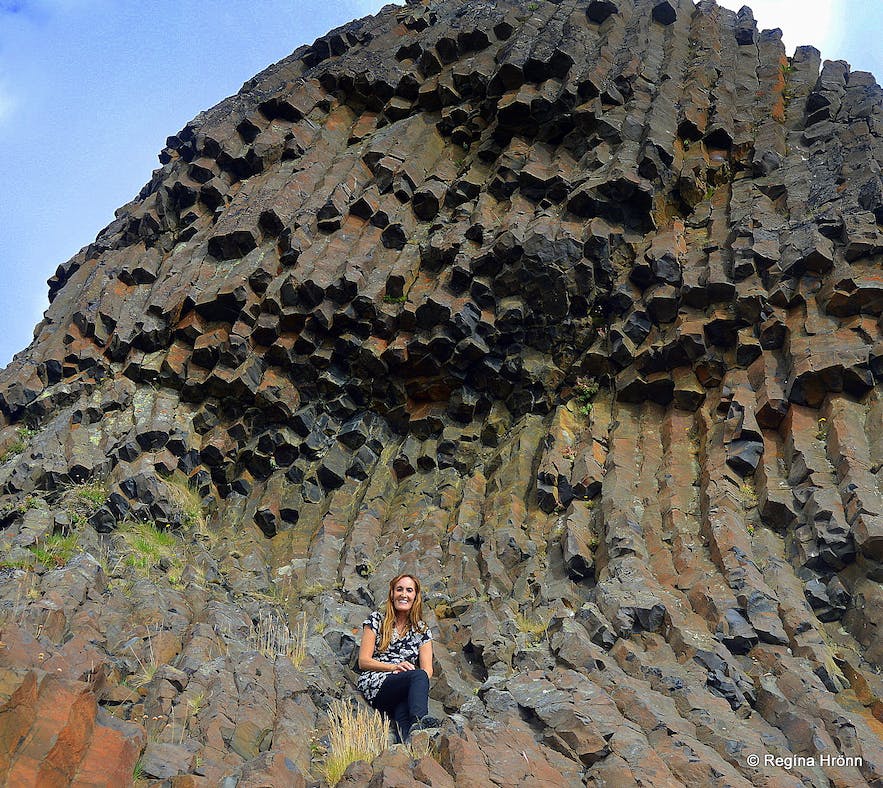 Reykhólar and its vicinity are filled with wonders and it was ever so nice coming back to Reykhólar Hostel in the evenings after a long day. Even though we always got in late at night we still got the chance to have a nice conversation in the living room with other guests in the hostel. This is what I love about hostels, the interaction with other travellers.

Reykhólar is for sure one of the hidden pearls of nature.

Reykhólar is located some 228 km away from Reykjavík which is a 3-hour-drive. To reach this area you can rent a car in Reykjavík and make Reykhólar your first overnight stay.

Have a lovely time at Reykhólar :)