Vestmannaeyjar, the volcanic Westman Islands in South-Iceland, are an archipelago south of Iceland, and a really interesting place to visit. A volcanic eruption took place in the town of Heimaey island back in 1973;  with all the inhabitants having to flee to the mainland.

In this travel-blog, I want to tell you about one of the heroes of the Westman islands - Guðlaugur Friðþórsson - and tell you why there is a free-standing bathtub in the open on Heimaey island. 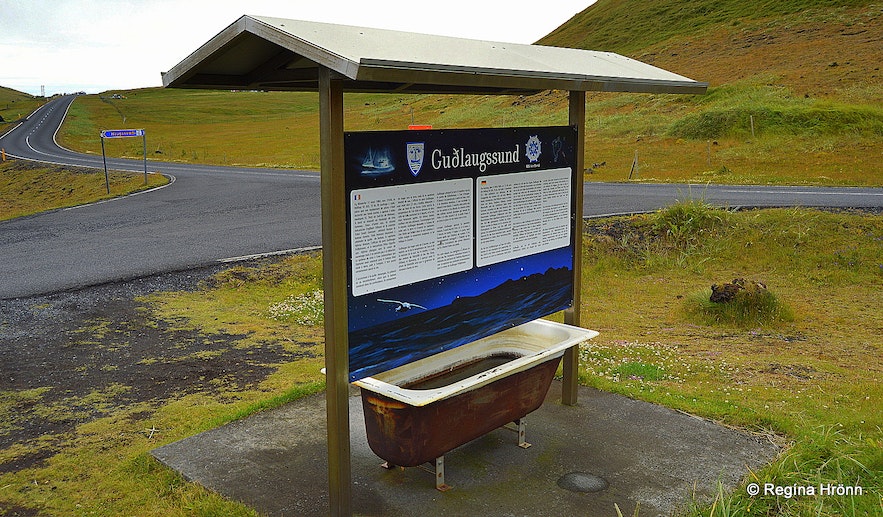 The bathtub with an information sing - a memorial

If you see a bathtub in Heimaey island, with an information sign in both Icelandic and English then you are looking at Guðlaugssund; a memorial of the rescue of Guðlaugur Friðþórsson and of the fishermen, who perished in the cold Atlantic ocean on the 11th of March 1984.

This memorial, which was donated by the captains and deck officers in the Westman Islands, was unveiled at the Fishermen's Festival in 1996.

Late at night on the 11th of March 1984, a herculean task was performed, when an Icelandic fisherman, Guðlaugur Friðþórsson (born in 1961), swam for 5.7 km from a sinking boat. The boat, Hellisey VE-503, had capsized and sunk east of Stórhöfði on Heimaey island.

The crew consisted of five men, the 23-year-old Guðlaugur being one of them. The other men in the crew were all young men as well, family men in the prime of their lives.  Two of the five men perished when the boat capsized, but the other three were able to crawl up on the keel of the boat.

The outside temperature on this winter night was only -2 degrees C and it breaks my heart thinking about my countrymen hanging on to the keel of the boat, cold and frightened :( They had to start swimming when the boat sank and lost sight of each other in the rough sea.

The sea was only 6 degrees C cold, but Guðlaugur, who was a deck officer, kept on swimming in the darkness alone in the cold Atlantic ocean. He saw the lights of Heimaey island and swam towards them and reached land 5 hours later! I remember Guðlaugur talking about an Arctic fulmar that had kept him company during his entire swim, almost like a guardian angel. And a star shining brightly the entire time in the overcast sky. 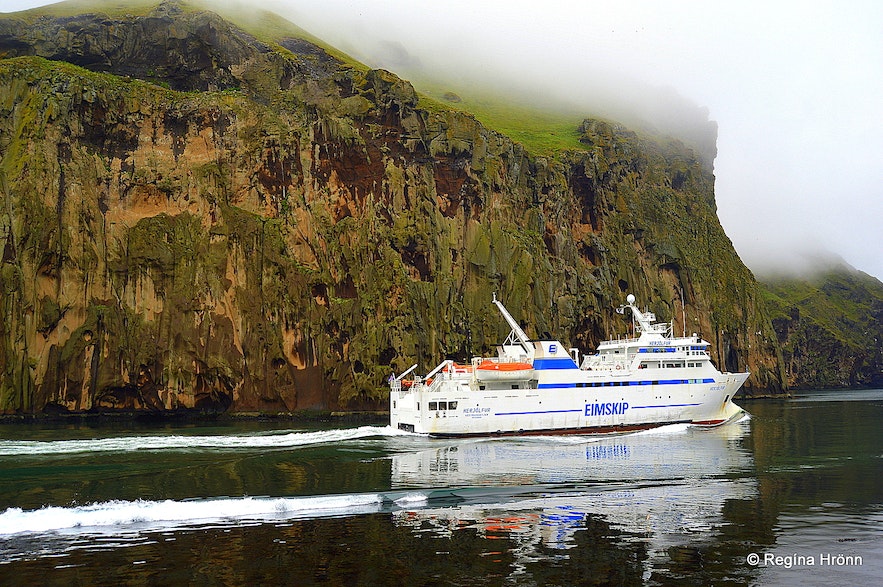 What an outstanding achievement, it is totally incomprehensible how this young man survived in the cold sea for so long. When he finally reached land, totally exhausted, the cliffs turned out to be too steep for him to climb them and the waves were crashing against the cliffs, so he had to step into the cold sea again and look for a better place.

I remember him saying in an interview on TV, that this was the hardest moment, finally having reached land and having to get back into the cold! I hope I am not mistaken when I say this. 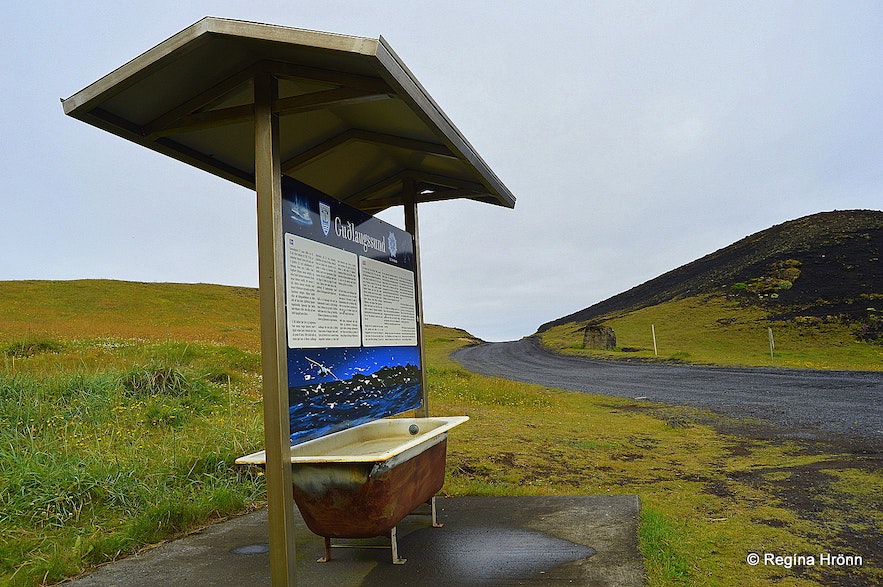 When Guðlaugur finally came ashore at a better place he had to walk barefoot in the frost and wind over a sharp lava field to reach the inhabited area of Heimaey island.  And we, who live in Iceland, know what sharp lava is like, like knives which tear one's shoes; I cannot even imagine walking on this sharp lava barefoot :(

When Guðlaugur had reached land he was exhausted and very thirsty. He noticed this tub which had water for the sheep. He broke through the ice on the water with his bare fist and was able to drink from the tub. 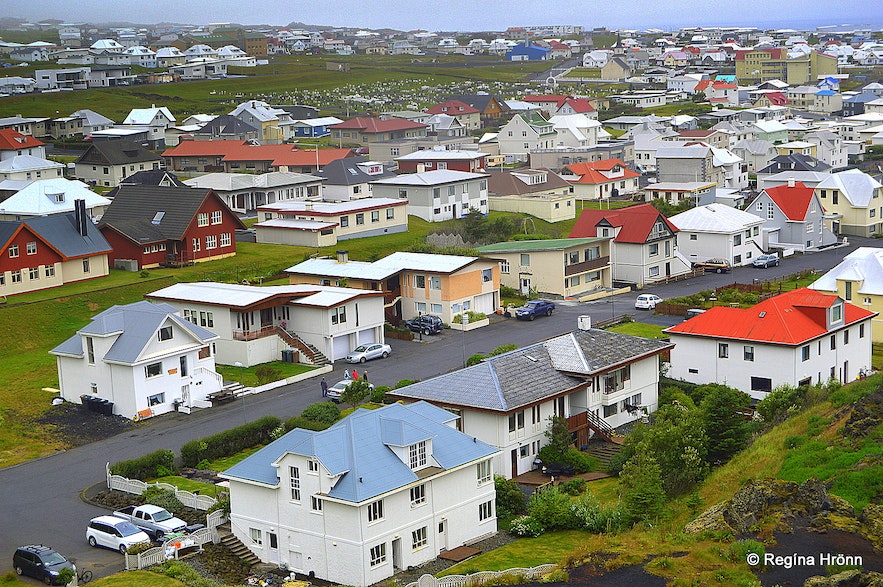 Guðlaugur then had to walk for 2-3 km in the frost before he reached the first house; 9 hours after the boat sank. What an ordeal! His body temperature could not be measured, it was below 34 degrees C, yet he didn't have hypothermia!

He was immediately driven to the hospital where his feet were attended to, but both his feet were badly cut and he had deep wounds from walking on the sharp lava and rocks. 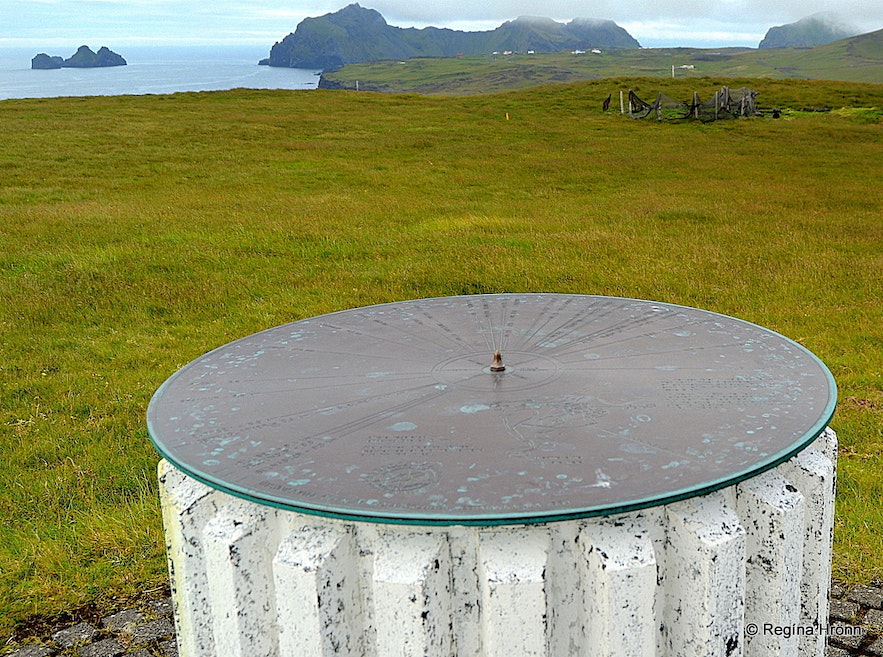 The view-dial on Stórhöfði cape

How Guðlaugur endured the cold sea of 5.4 degrees C for so many hours is incomprehensible, and hypothermia experiments were made on him both in Iceland and in the Physiological Department of the London Hospital Medical College. They found out that the fat in Guðlaugur's body was almost like seal-fat and thus he was able to survive for so long in the cold sea.

The other 4 fishermen drowned. This is such a sad and heroic story. Guðlaugur does not want the focus to be on his outstanding achievement, but on the 4 fishermen who lost their lives on that night. I cannot even write this without tearing up :( 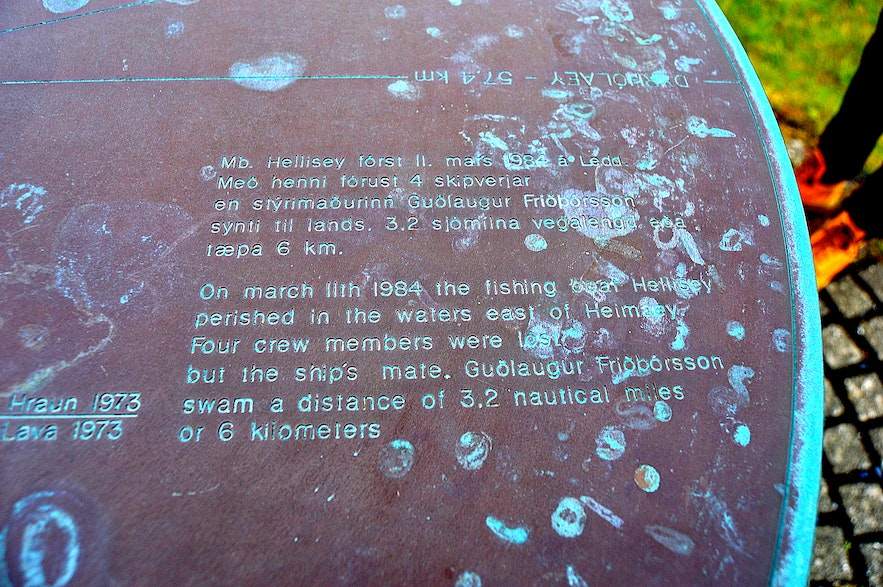 The view-dial on Stórhöfði cape

On the view-dial at Stórhöfði cape is written on the right-hand side: "On March 11th, 1984 the fishing boat Hellisey perished in the waters east of Heimaey. Four crew members were lost, but the ship's mate, Guðlaugur Friðþórsson, swam a distance of a 3.2 nautical miles or 6 kilometers."  The view-dial will show you the direction from which Guðlaugur swam.

Here you will find photos of this extraordinary man Guðlaugur Friðþórsson. A film was made in 2012 on Guðlaugur and the night of this incredible deed. It is called Djúpið in Icelandic or the Deep. 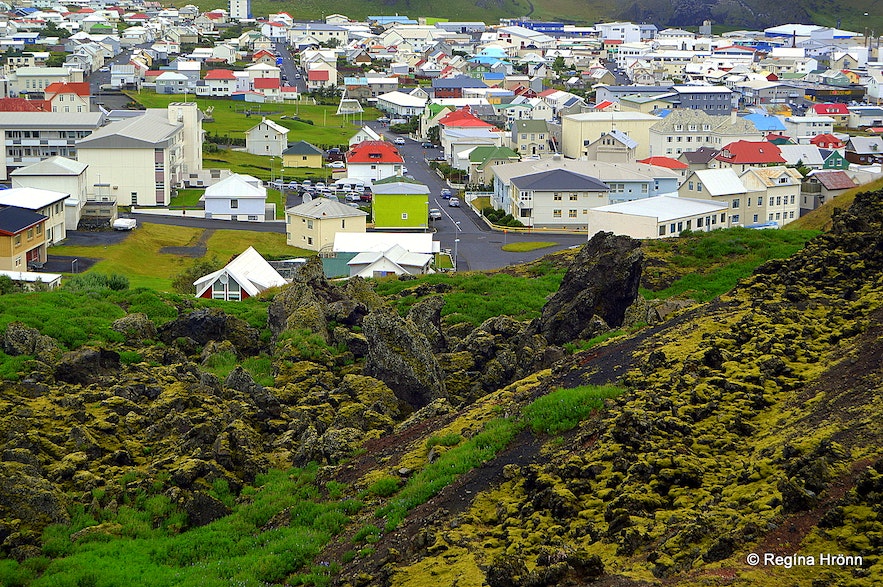 Guðlaugssundið - the Swim of Guðlaugur - has been an annual tradition in the Westman islands since 1985, a year after Guðlaugur's heroic swim. This tradition, which takes place in the swimming pool of the Westman Islands, commemorates the deed of Guðlaugur, and all the fishermen lost at sea.

It also serves as a reminder to keep our vigilance in the prevention of accidents at sea. In 2018 fifteen participants swam a distance of 6 km, which is the distance Guðlaugur swam 35 years ago.

This travel-blog is a part of a series of travel-blogs I have written about the Westman Islands.

In almost all Iceland's towns and villages, you will notice memorials, which I call the heart of every town and village in Iceland; Minnismerki drukknaðra sjómanna - the Memorial for drowned fishermen in Iceland. We Icelanders have lost too many good men at sea and on this day we lost four more; we are glad that Guðlaugur Friðþórsson survived.