One of the best-preserved turf houses in Iceland is the beautiful red Bustarfell Manor in North-East Iceland, close to Vopnafjörður town. It is a large turf house, consisting of 17 houses!

I seek out all of the traditional Icelandic turf houses on my travels here in my country. I just love these old houses, the architecture of which dates back to the Settlement of Iceland in the 9th century. 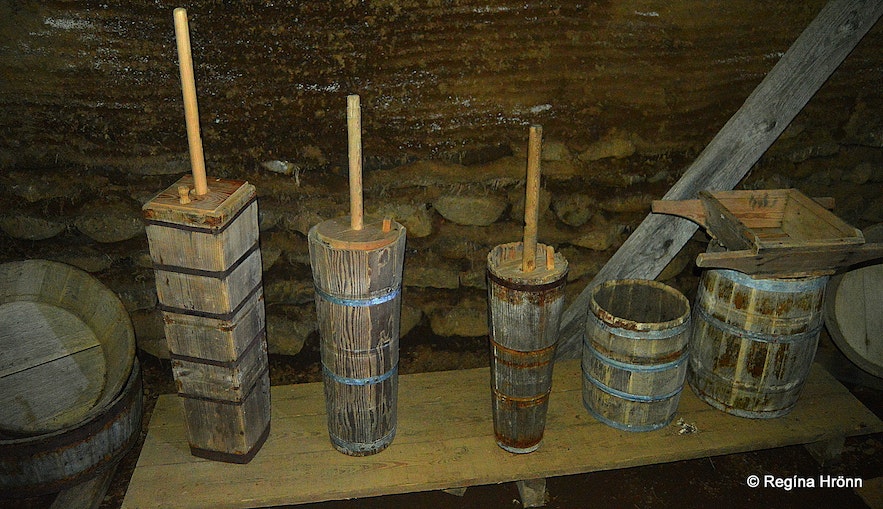 Here in this lovely manor people lived from 1770 until 1966. Bustarfell is now a museum and here one can turn back the clock and enter a different world. The "newest" rooms are 50 years old, but other rooms are much older.

I have added three kitchen photos, two of the age-old open-hearth kitchen and one of the newer modern version of a kitchen, dating back to 1944, where one can see how living standards have changed through the centuries. 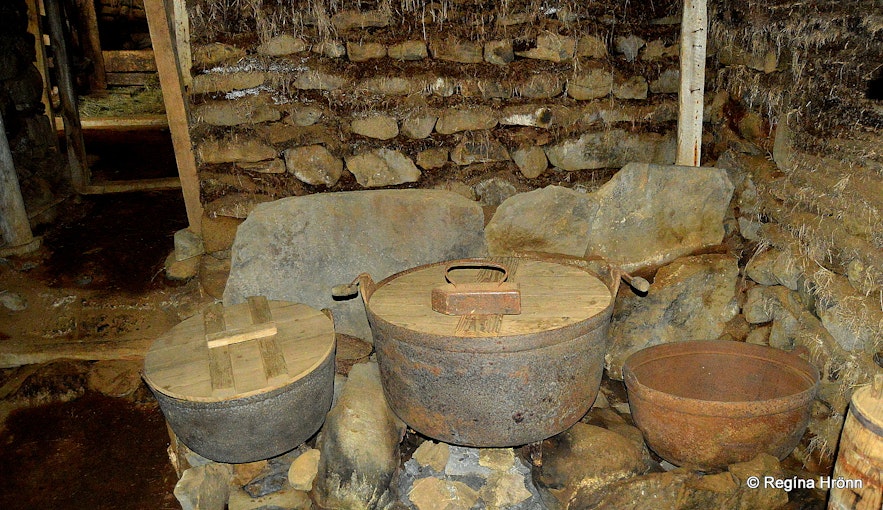 There was an older turf house here, dating back to the beginning of the 18th century, but that farm burnt down in 1769.

This land has been in the occupancy of the same family since 1532 and they still live here in houses, which were built in the 1960s. 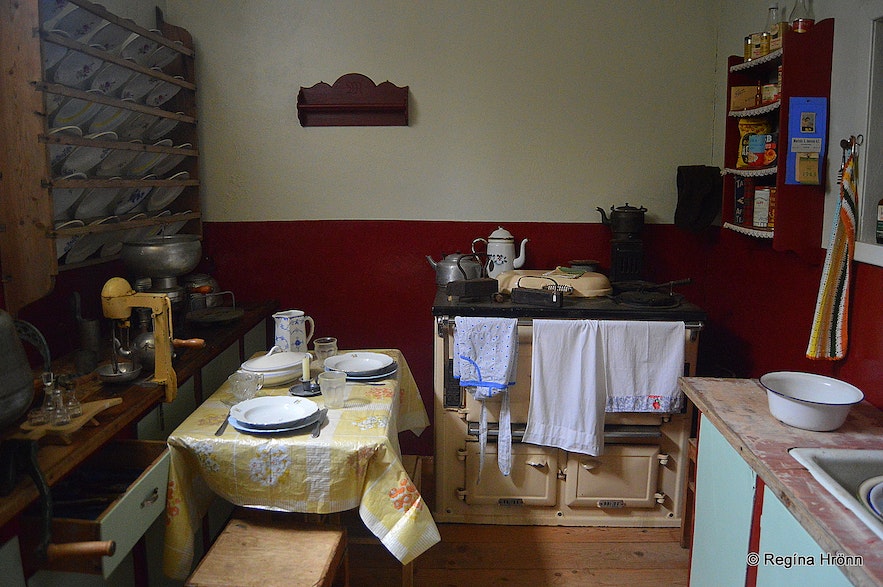 Walking through the turf house one can see the thickness of the walls, they are just incredibly thick, which made them very well insulated, which was needed during the long, cold winters in Iceland.

When people moved out of the turf houses and into stone houses they noticed that the stone houses were colder, and now our stone houses are heated up with natural geothermal water. 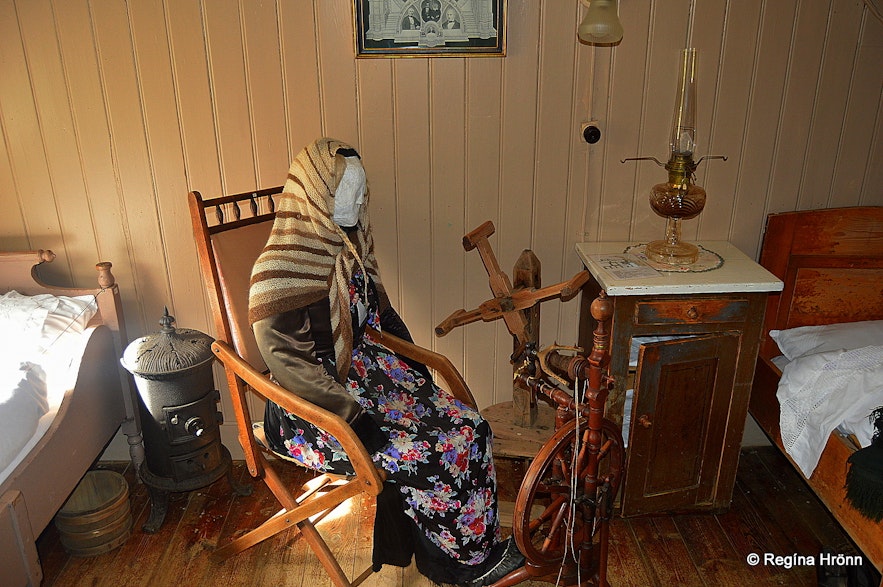 At Bustarfell one can walk through the different rooms of the turf house, visit the cow shed, have a look down at an old inside well, see the stithy with all its old tools, etc. Here you will find several lovely living rooms and bedrooms.

Seeing that people lived at Bustarfell for centuries and into modern times in the 1960s then changes have been made to the turf house to modernize it. It has got electricity and running water, central heating and an indoor WC. And a concrete chimney. 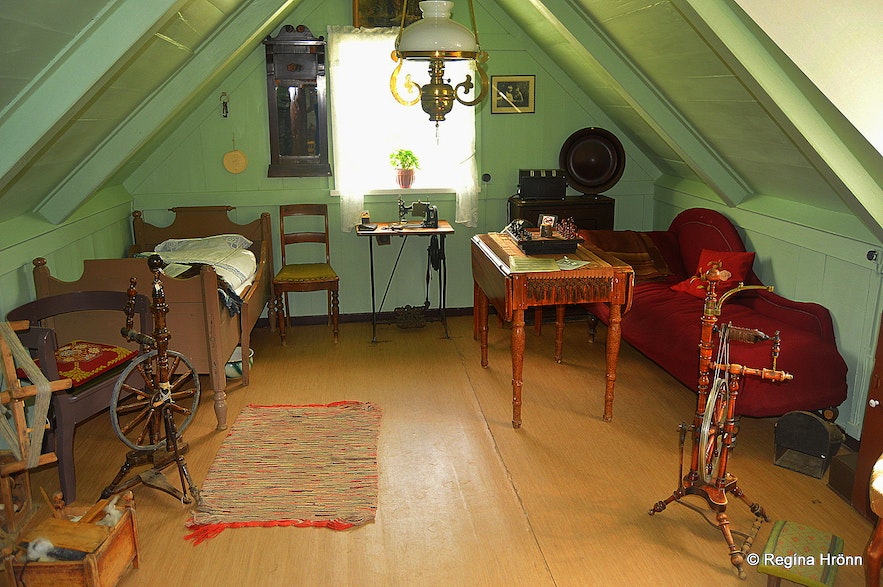 I just love walking through the different rooms of turf houses, which are connected by a passageway, imagining what life must have been like through the centuries for my ancestors when they were living in turf houses.

My grandmother was born in a turf house and she told me stories from her childhood in a remote valley in the Westfjords of Iceland. 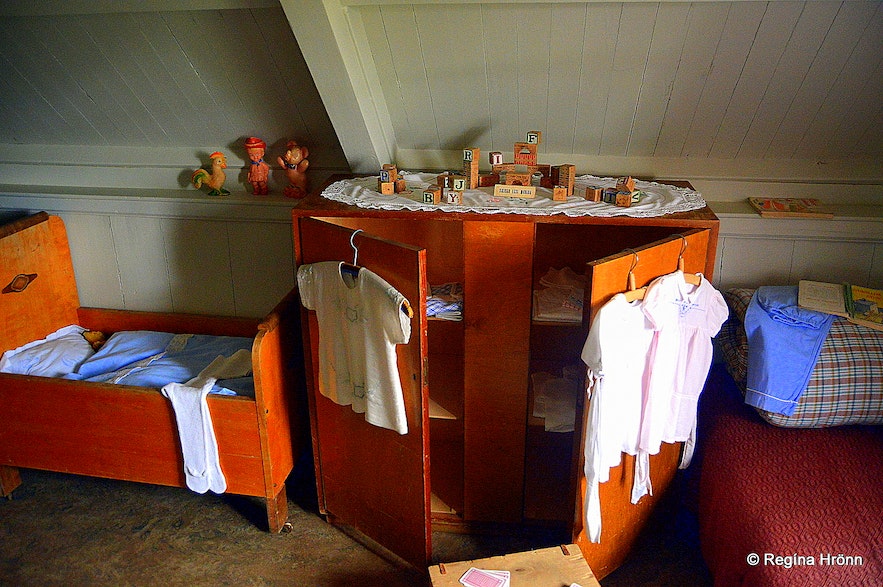 Don't miss the opportunity of visiting this beautiful turf house at Bustarfell when travelling in East Iceland. The heritage museum is open from June 10th until September 10th from 10:00-17:00.

Behind the museum, you will find Café Croft, a very lovely café. At the café, one can buy pillows, veils, and pictures with the pattern from the golden laced woven cloth given to the wife of the sheriff at Burstarfell after she helped an elf lady in labour. The pattern is so beautiful.

Bustarfell was the residence of the district sheriff/commissioner in the 16th and 17th centuries, so the folklore dates back to that time. 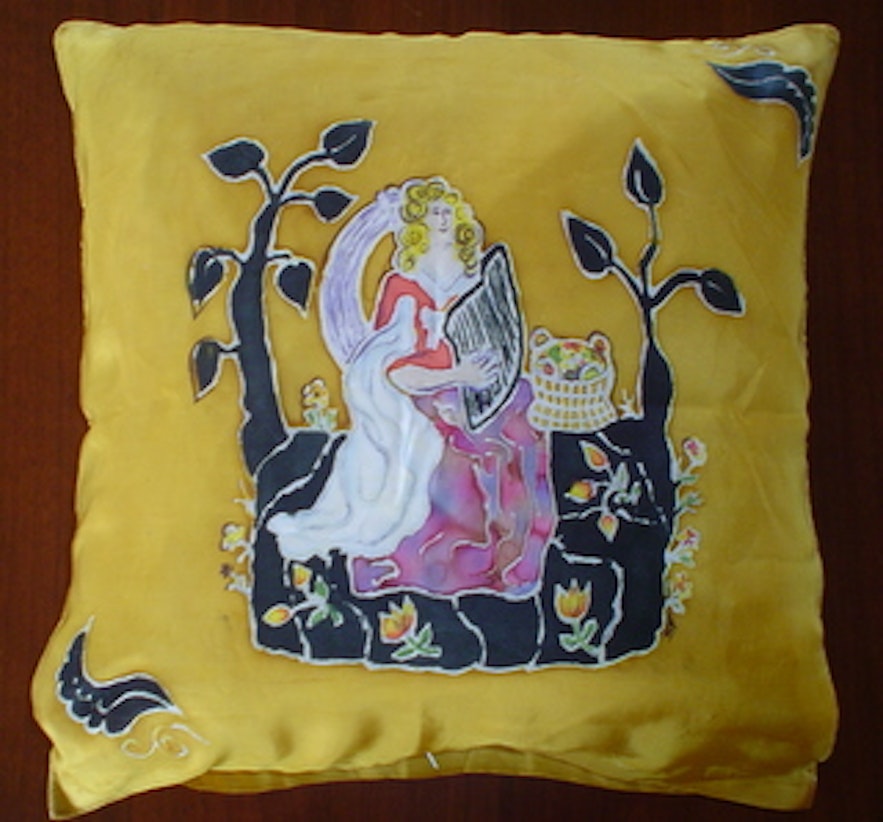 The farmer at Bustarfell, Methúsalem Methúsalemsson, donated many of the exhibits at the museum and while visiting the museum one gets the feeling of visiting someone's home and that you could run into the inhabitants at any given moment :)

You might have noticed that I sometimes write Burstarfell and sometimes Bustarfell. Most websites write Bustarfell, including the museum website and the official travel guide. But in Þjóðsögur Jóns Árnasonar - the Folklore of Jón Árnason I saw it written Burstarfell and the farmer told my father-in-law that the correct name of the farm is Burstarfell. So what to do? I decided on writing Burstarfell when I refer to folklore. 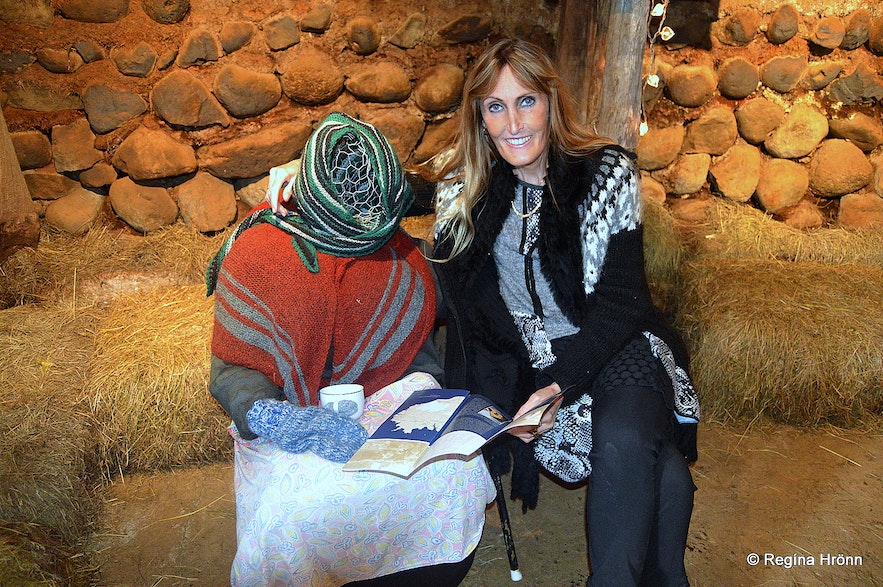 To visit Bustarfell you can rent a car in Reykjavík and drive to the East Fjords. The closest village, Vopnafjörður, is located 621 km away from Reykjavík. 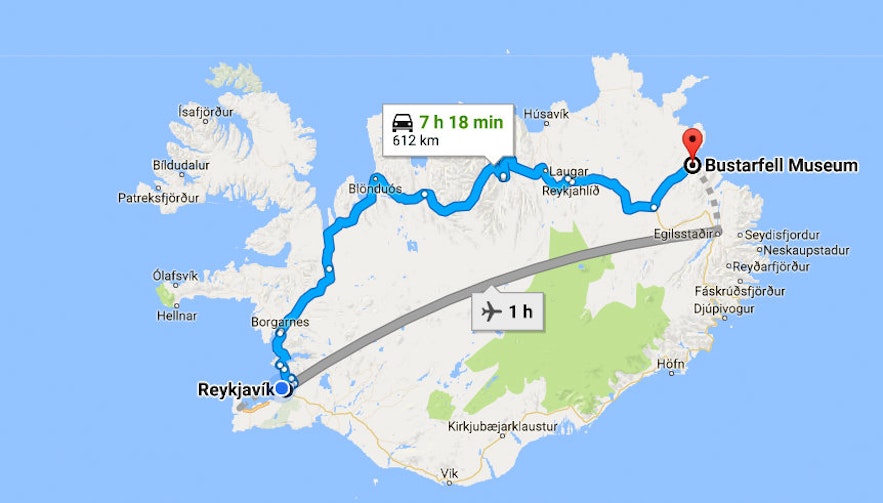 A short drive from the museum and a 30-minute hike up a hill you will find an elf-rock, where the wife of the sheriff living at Burstarfell, participated in helping a female elf in labour. I have written about this interesting folklore in my travel-blog:

The Sheriff's Wife and the Elf-Woman in labour - Icelandic folklore

On Bustarfell above the farm and museum Bustarfell, you will find one of the 90+ view-dials in Iceland. And from there is a great view - it was getting dark during my visit so my photos, unfortunately, have a blue hue.

The view-dial shows the names and heights of the surrounding mountains and also acts as a sundial. 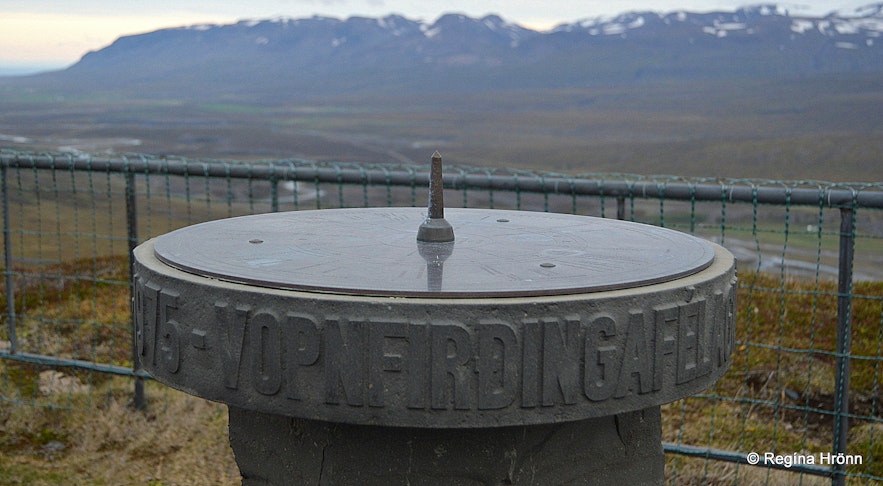 The view-dial is a basalt column with a copper plate. I especially like the big letters on it, which I haven't seen on many view-dials in Iceland.

Here is the location of Bustarfell on Google maps.

If you want to see more turf houses then I have written a travel-blog with photos about most of the Icelandic turf houses:

Have a lovely time at Bustarfell :)