Dimmuborgir - the Dark Fortress at Mývatn are a true wonder of nature. Dimmuborgir consists of huge lava rock formations which make you feel like you stepped into another world - a world of fairy tales.

The formation of these extraordinary lava pillars stems from molten lava creating a lava pond in the eruption of Lúdentarborgir and Þrengslaborgir row of craters some 2,300 years ago.

Top photo: Inside the gap at Dimmuborgir

The molten lava pond began solidifying on the surface creating a crusty roof, with the lava flow deepening the lava pond. Groundwater became trapped underneath the lava pond and steam issued through vents it created in the lava and formed these pillars.

The solidified pillars then remained standing even after the lava pond had emptied itself and the lava roof had collapsed. Or something to that extent as far as I can understand ;) 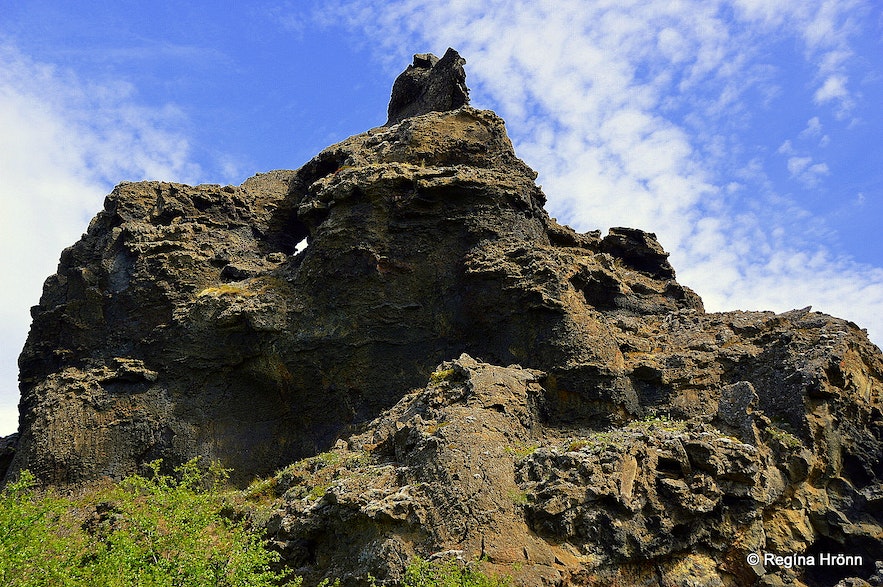 Huge formations in Hallarflöt at Dimmuborgir

There are several bird species in Dimmuborgir that should not be disturbed, f.ex. the falcon, so it is very important to keep to the paths and not walk on roped-in areas, which are roped in for the protection of the vegetation. 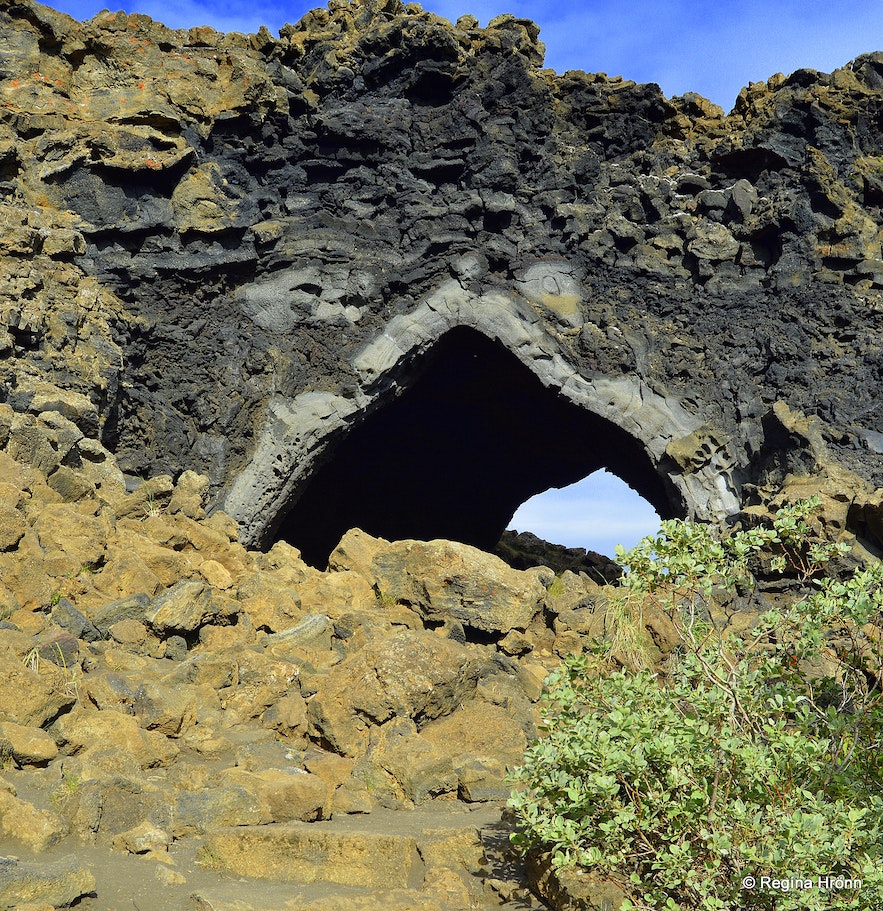 Kirkjan - the Church at Dimmuborgir

If you walk up the steps to the church you will notice that it is a cave open in both ends with a high-dome-shaped roof. It looks like it is man-made, but it is actually a lava cave, which looks a little like a Gothic church. 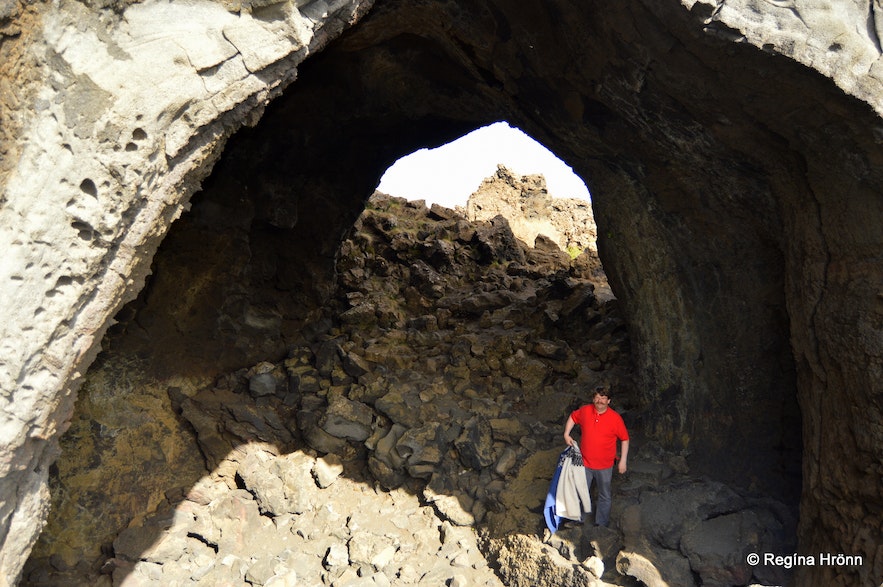 My husband inside Kirkjan - the Church at Dimmuborgir

Returning back you walk through sandhills and close the ring by the parking lot. Just remember that the name of the entrance to Dimmuborgir is Borgarás.

The path is well marked and you cannot get lost unless you get off the track or are in Dimmuborgir after dark... 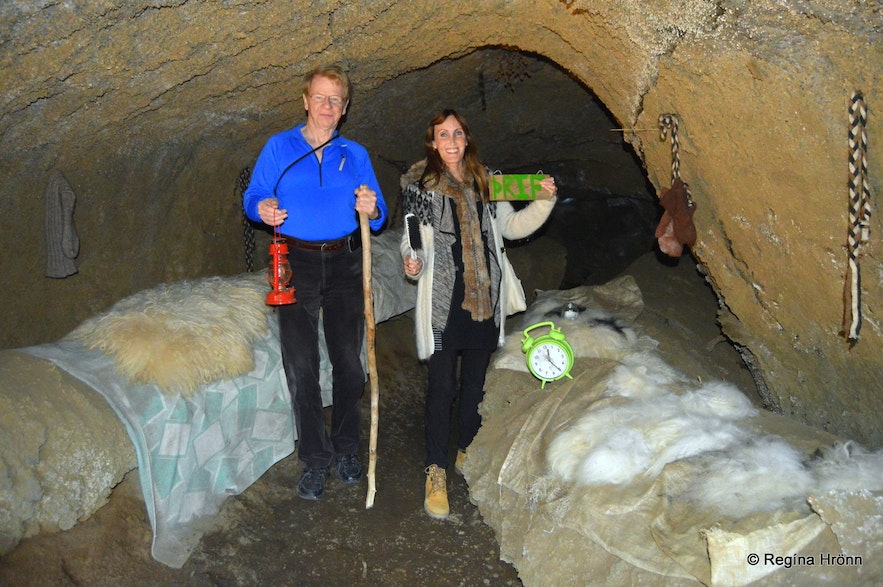 With my father-in-law inside Jólasveinahellirinn

Here in Iceland, we have 13 Yule lads, which are quite different from Santa Claus. There are records of names of more than 70 Yule Lads, but somehow these 13 Yule lads have stayed with us until modern times. 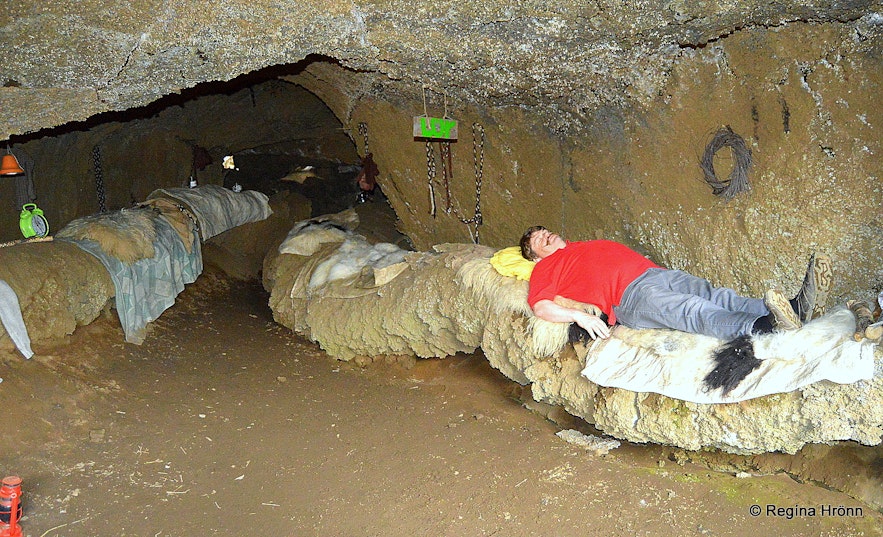 My husband inside the Yule lad cave at Dimmuborgir

The Yule lads sleep in their cave during the summertime and can rarely be seen walking around as they are resting. In November and December, it is a different story, then there is a good chance of running into a mischievous Yule lad! I visited their cave twice last summer and was lucky enough not to run into them in their cave ;) 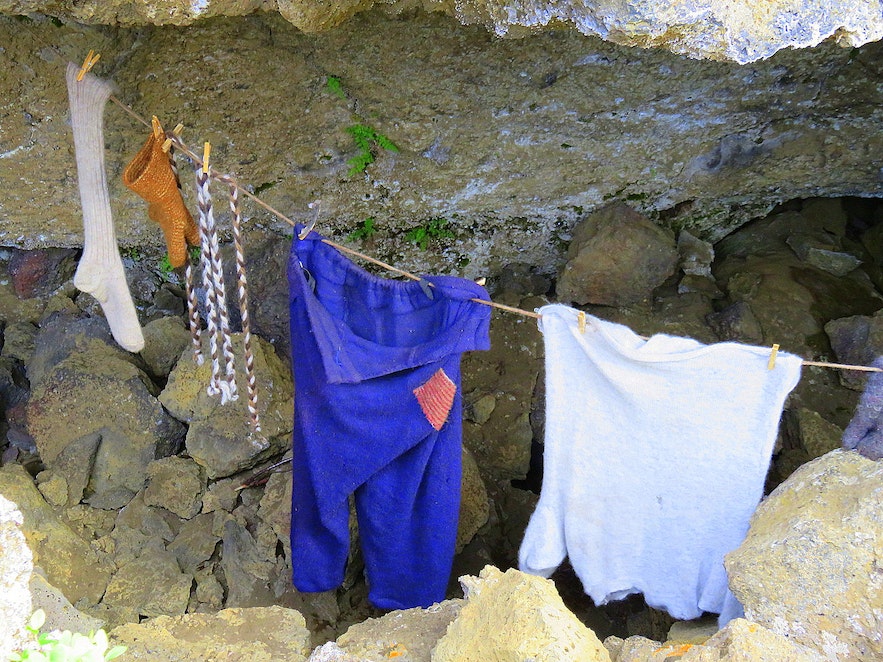 The Yule lads left their laundry out to dry 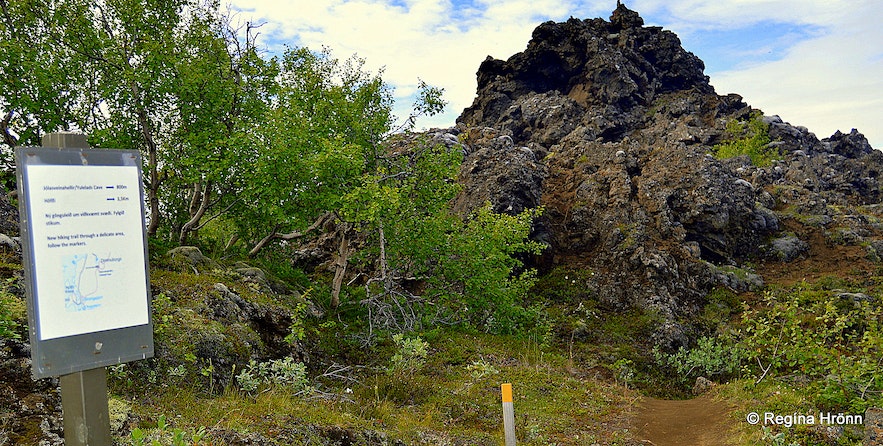 The beginning of the path leading to the Yule lad cave

It is not easy finding this cave, but so worth it if you manage to stumble upon it. I often get letters from travellers, asking me about the exact location of the cave. Am I at liberty to give information on a hidden cave? I don't know, but the photo above will give you some idea of where to find this cave.

There you will see where you turn off from the main path, the rest is up to you ;) 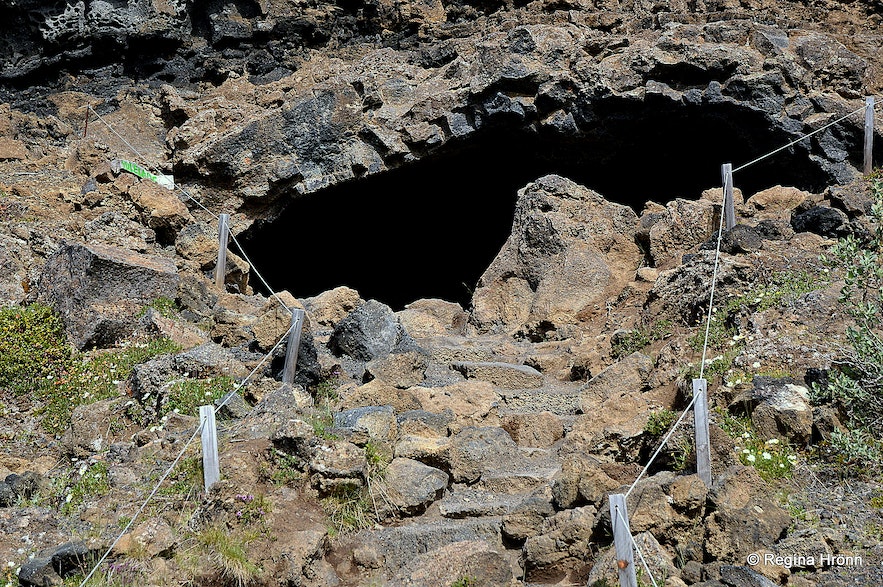 There is another cave of the Yule lads at Hallarflöt and you might meet the lads there from time to time.

It is much easier to find. That cave is much smaller, with some small chairs and a few personal items of the Yule Lads 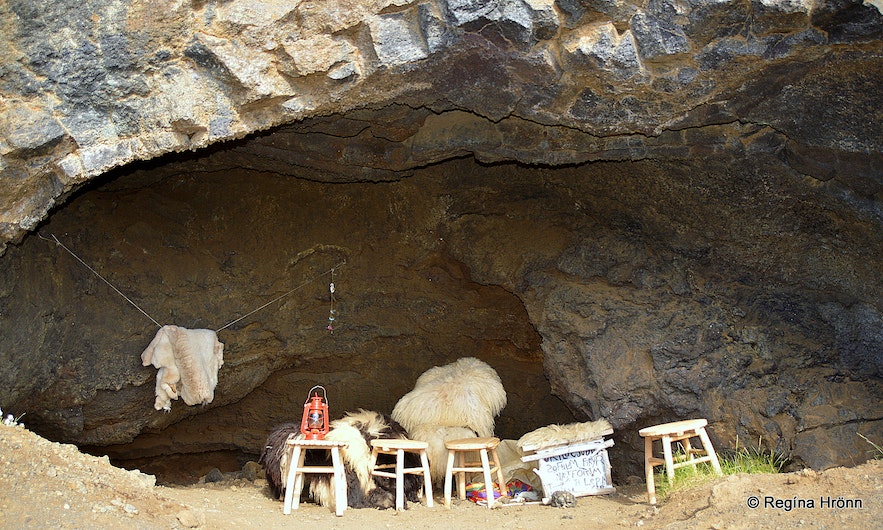 On a donation box in the cave is written that they are collecting money for pyjamas for Leppalúði, their father :)

At Hallarflöt you will also find the chair of the Yule Lads, in which you can sit and have your photo taken.

You will find a beautiful view-dial by the Dimmuborgir parking lot. Where ever I travel in Iceland, I look for view-dials. The designer of this view-dial is Jakob Hálfdanarson, my father-in-law (see my photo below), and it was erected by Náttúruverndarráð (Wildlife Conservation), Skútustaðahreppur rural district and Landgræðslan (Soil Conservation Service of Iceland) in 1990. 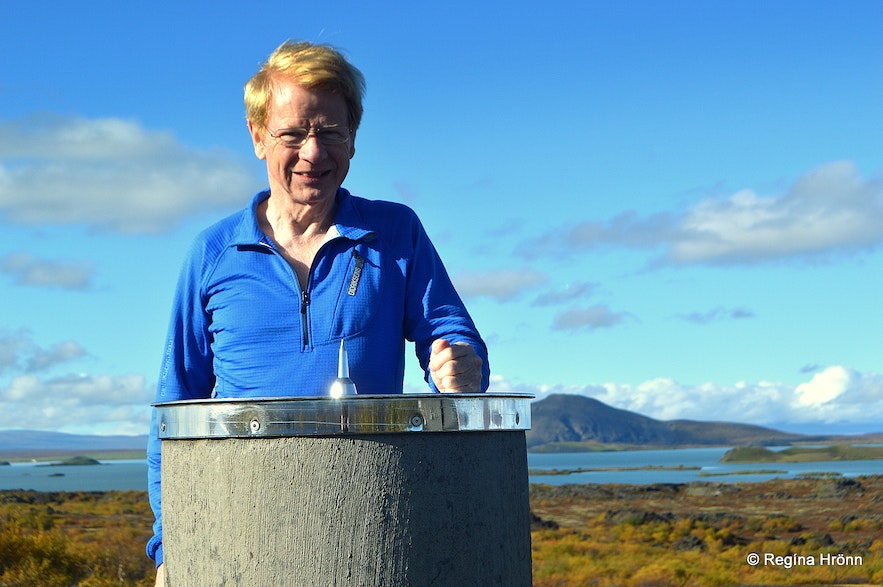 My father-in-law Jakob Hálfdanarson by the view-dial at Dimmuborgir, which he designed 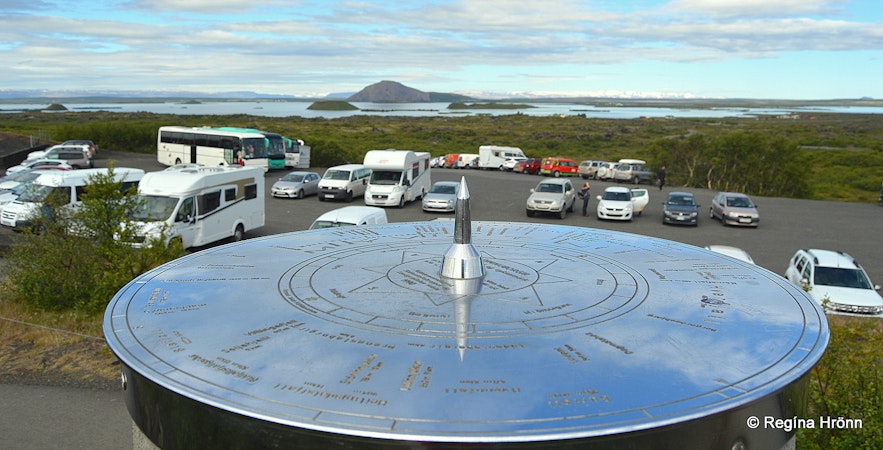 The view-dial at Dimmuborgir is a molten cylindric with a chrome plate with a time of three hours. It stands on top of an octagon wooden podium with a star - very beautiful! 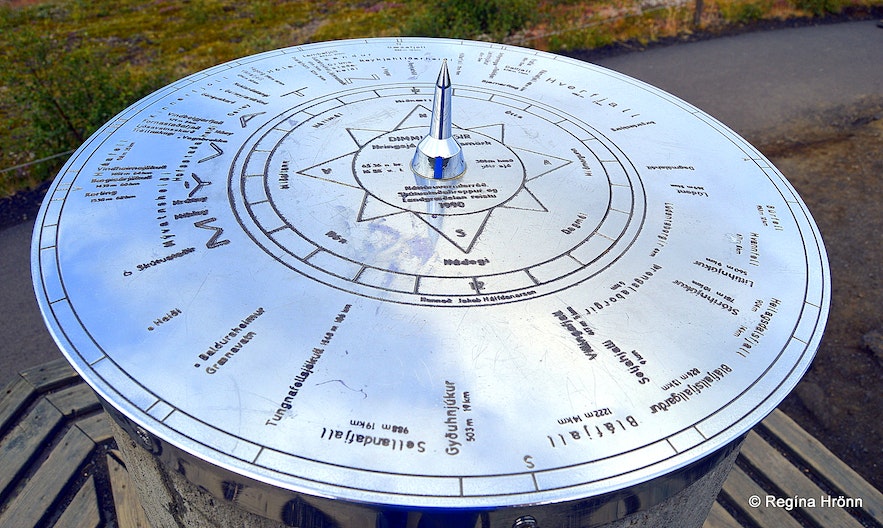 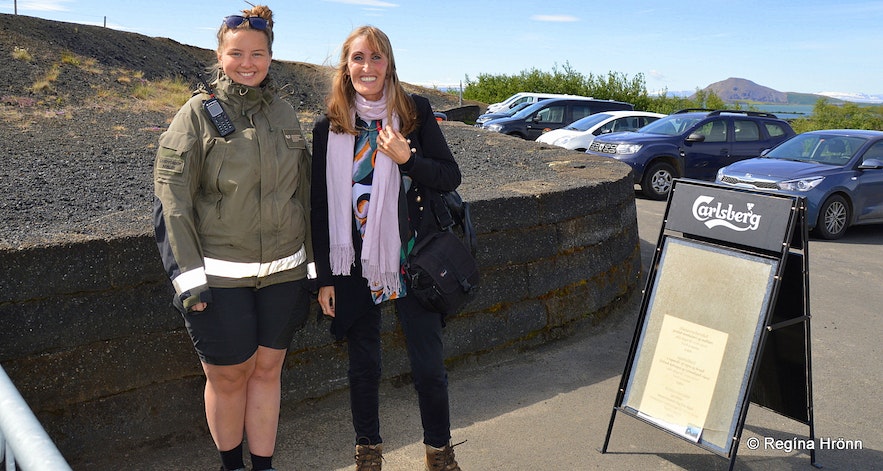 A guided tour of Dimmuborgir in English

Even though Dimmuborgir look like a place where the elves or the Hidden People of Iceland might reside, then I have not heard of any folklore related to this area. And our mediums have not seen any elves in this location.

Ásbyrgi on the other hand might be the capital city of the Elves in North-Iceland and you can read up on what Margrét from Öxnafell, a well-known medium, saw when she visited Ásbyrgi in my travel-blog: 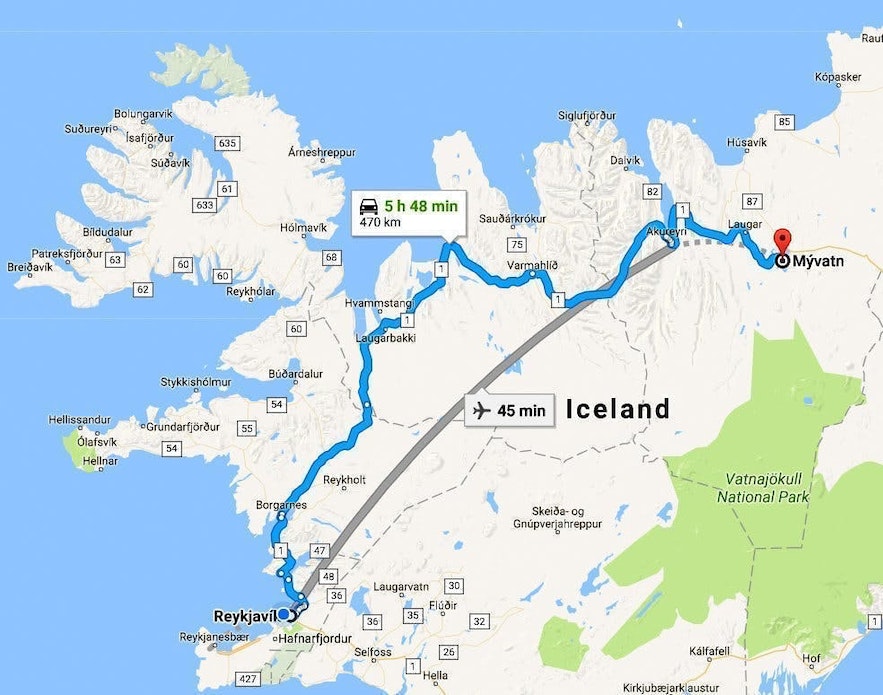 I have added many other travel-blogs about the Mývatn area if you want to join me on a tour of this amazing area:

To visit Mývatn you can rent a car in Reykjavík and drive up here in two days. My husband's family owns a summer cottage in this area and we have driven from Reykjavík to Mývatn in one day, but I wouldn't recommend it.