There is a beautiful fjord up in North-Iceland called Eyjafjörður fjord. It is about 60 km long from the mouth to the bottom of the fjord, making it the longest fjord in North-Iceland. In this lovely fjord, you will find so many interesting places, that I thought it to be fitting to dedicate 7 travel-blogs on all the interesting things to see and do in Eyjafjörður :)

In this first part of my series of travel-blogs on Eyjafjörður, I am going to tell you about Hrísey island, the Pearl of Eyjafjörður fjord. It is well worth it taking the short ferry ride across to the island while in this area. 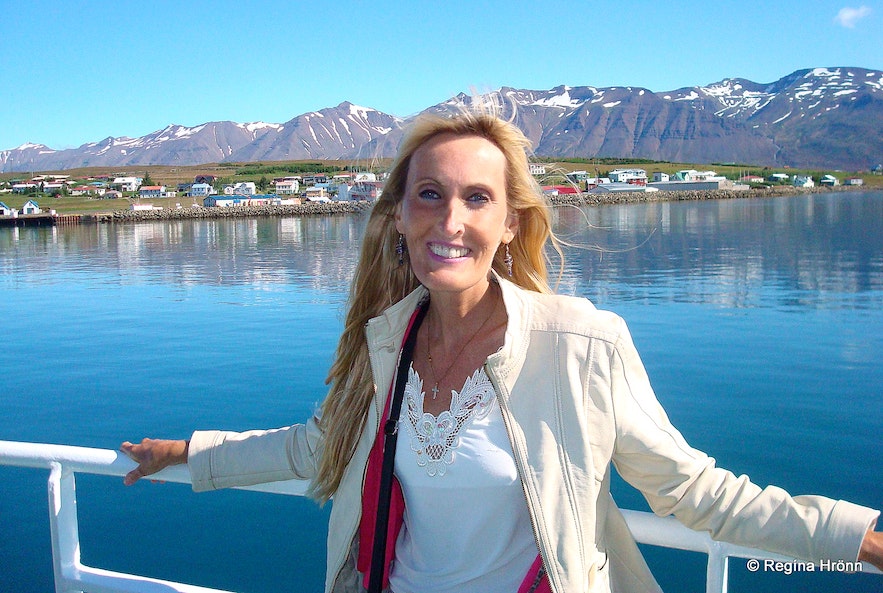 Sailing to Hrísey, the Pearl of Eyjafjörður

Hrísey island is the second-largest island in Iceland with 180-190 inhabitants. It is 7.5 km long and 2.5 km wide at its widest point. Only Heimaey island is bigger than Hrísey, but you can read up on that very interesting volcanic island in my travel-blog the Westman Islands of Iceland - the Settler, the Beautiful Stave Church & more interesting Things.

When arriving in Hrísey you get greeted by the taxi on the island - a tractor with a hay cart capable of transporting quite a few people. The taxi takes you on a guided 40 minutes' trip around the island. 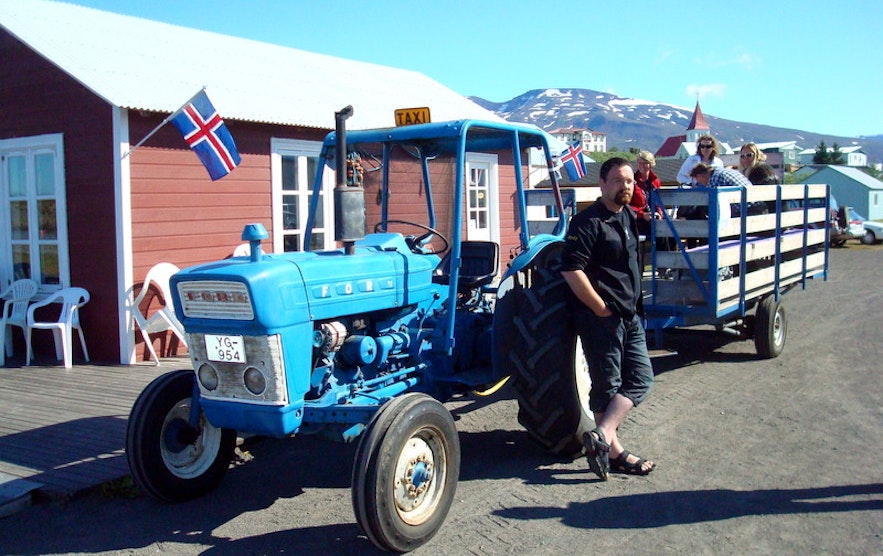 Next time I visit Hrísey I will go on that guided tractor tour.  But this time around I opted for walking around in the village at Hrísey. There you will find a convenience store, a church, restaurants and guest-houses, a campsite and a swimming pool.

The oldest house in the village is the red "Hús Hákarla-Jörundar" or the House of Shark-Jörundur, built in 1886, which is now a museum and the tourist information of Hrísey. The museum tells the history of shark fishing in Iceland through the centuries. 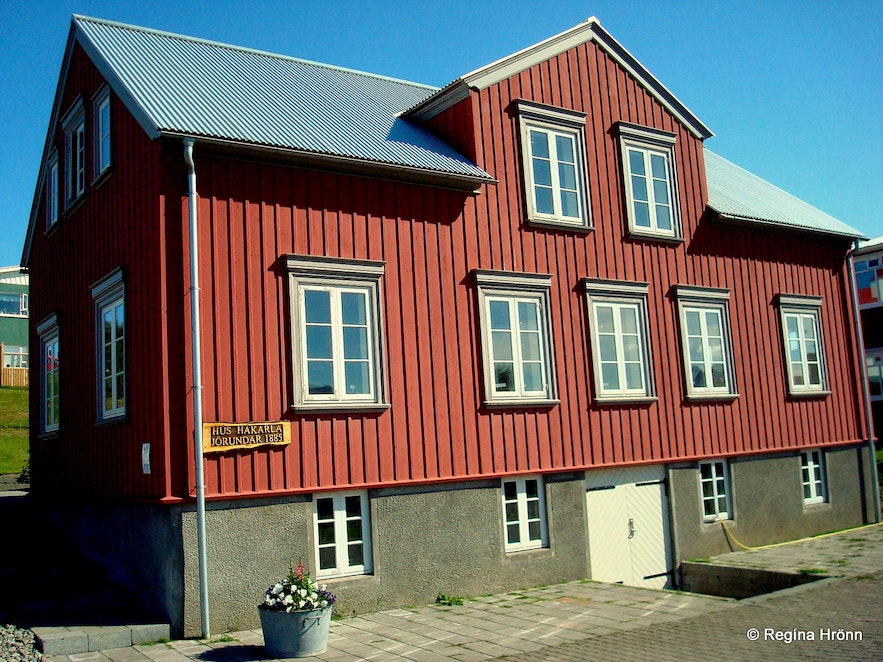 The main industry in Hrísey is small fishing vessel fishery and blue mussel breeding - and of course tourists in the summertime.

In the mid-twentieth century, the harbour at Hrísey used to be the second-largest herring port in the north - right after Siglufjörður town, the Herring town of Iceland. Later on, the herring disappeared and things started declining.

The Icelandic Quarantine Centre was established on Hrísey in 1974 so that the Galloway cattle could be imported from Scotland to Hrísey. One can see this cattle grazing in certain parts of Eyjafjörður fjord, and as it is so different from our Icelandic cattle, we always stop the car and have a look at them :)

You can get a beefsteak in Restaurant Brekka in Hrísey from the Galloway breed. 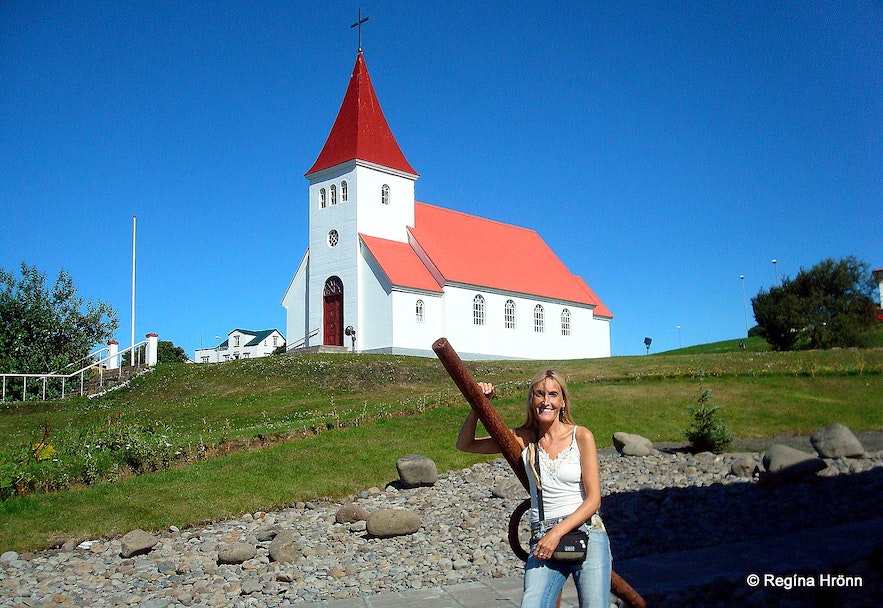 Hrísey island is so peaceful and there are a couple of houses here that are used as summer houses, one of them owned by a police chief in Reykjavík. From 1930-1950 the island was not this peaceful when the population of the island multiplied during the summer months of the herring salting.

Hrísey is a birdwatcher's paradise, some 40 species of birds nest on this small island - and here the ptarmigan can be seen in abundance.

The ferry Sævar leaves 9 times per day from Ársskógssandur and it only takes some 15 minutes to reach the island. You can buy the tickets by the accommodation ladder when entering the ferry. 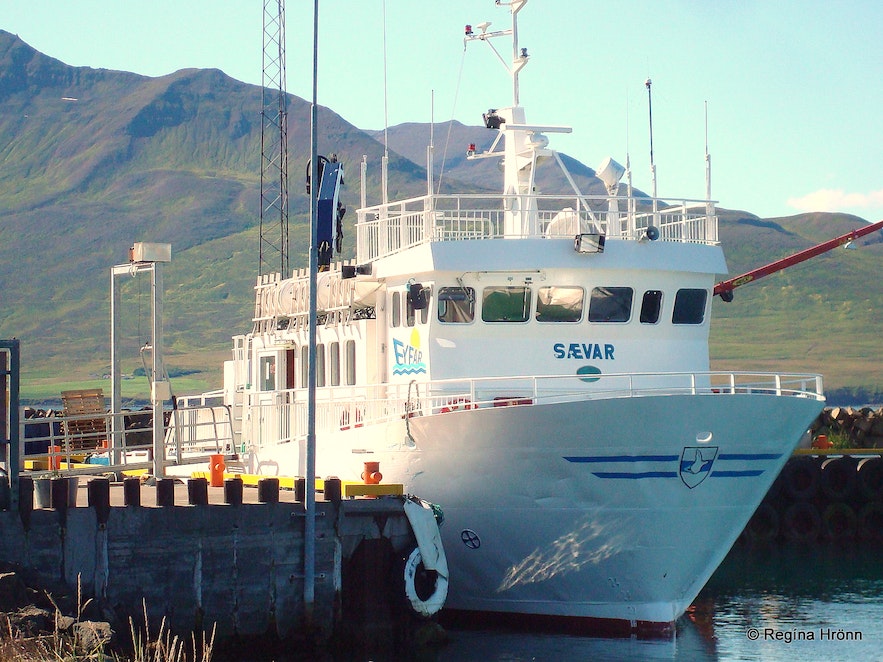 I absolutely loved my visit to the island - I got the best weather ever - 20 degrees C, still and sunny, so this made for a beautiful trip.

Angelica (hvönn) is found in abundance in Hrísey and is used for the health products of Saga-Medical. And for one type of beer produced at the brewing factory at Árskógssandur, which is just opposite the sea from Hrísey - Stinnings Kaldi. 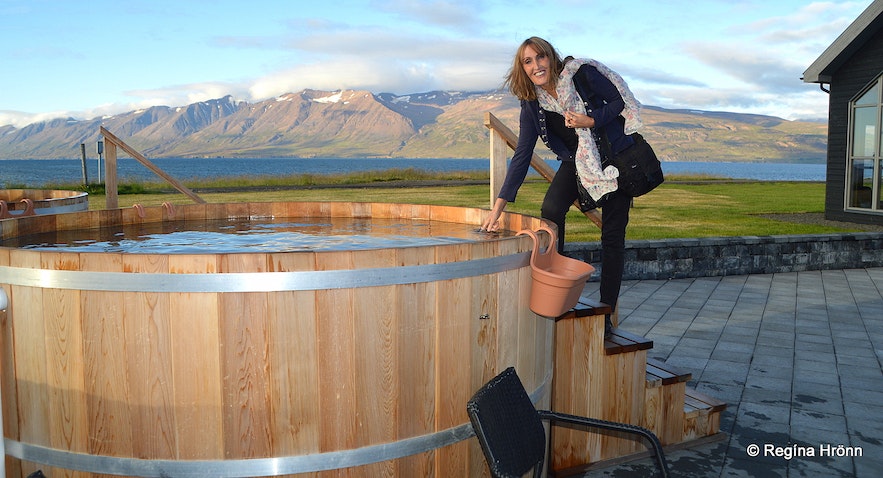 The outside tubs at Bjórböðin

All of the beer produced at this factory is called Kaldi something or another.

In the summer of 2017, the Bjórböðin Beer spa opened at Árskógssandur.

At the Beer Spa, you can bathe in young beer in wooden kegs. I have visited the restaurant of the Beer Spa and got a peek into the spa to see what it looked like. 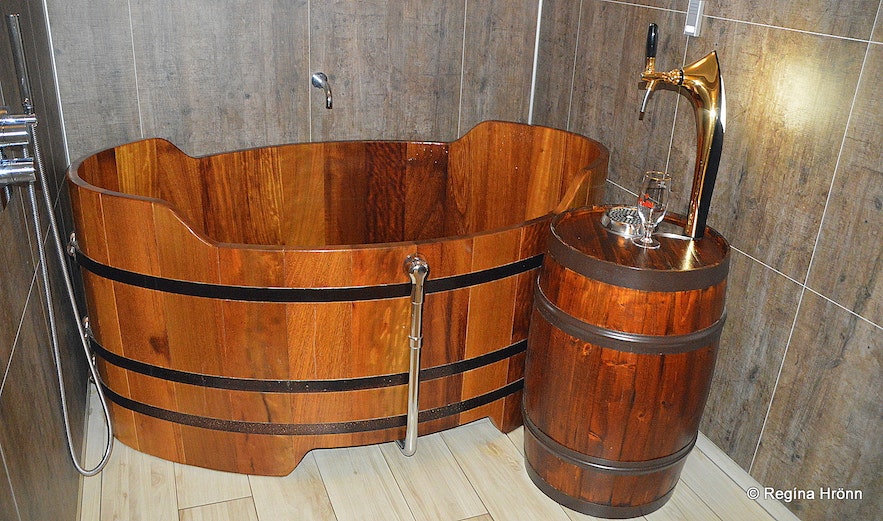 I can tell you that it looked very promising and I will for sure try it out on my next visit to Árskógssandur ;) It is also possible to sit outside in kegs filled with geothermal water.

Now we cannot leave Hrísey island without mentioning one of the most horrific ghosts in Iceland - Þorgeirsboli or the Bull of Þorgeir, which roamed around in this area in the first part of the 18th century. This folklore can be found in Þjóðsögur Jóns Árnasonar - the Collection of Folklore of Jón Árnason.  According to legend the sorcerer Þorgeir Stefánsson, a.k.a. "Galdra-Geiri", conjured up this horrible ghost.

The Islanders at Hrísey could sense his presence late at night and heard him roaring. Some people saw this frightening ghost and described him like a dog, a cat, and a string of fog - but most of the islanders described him as a skeleton-bull dragging a bloody loose skin behind on his tail!

The sorcerer first conjured up the ghost to haunt a poor woman who had rejected his love. Then the horrible ghost grew stronger and stronger and started to hunt the sorcerer and his family - some say it is still out there somewhere roaming about!! 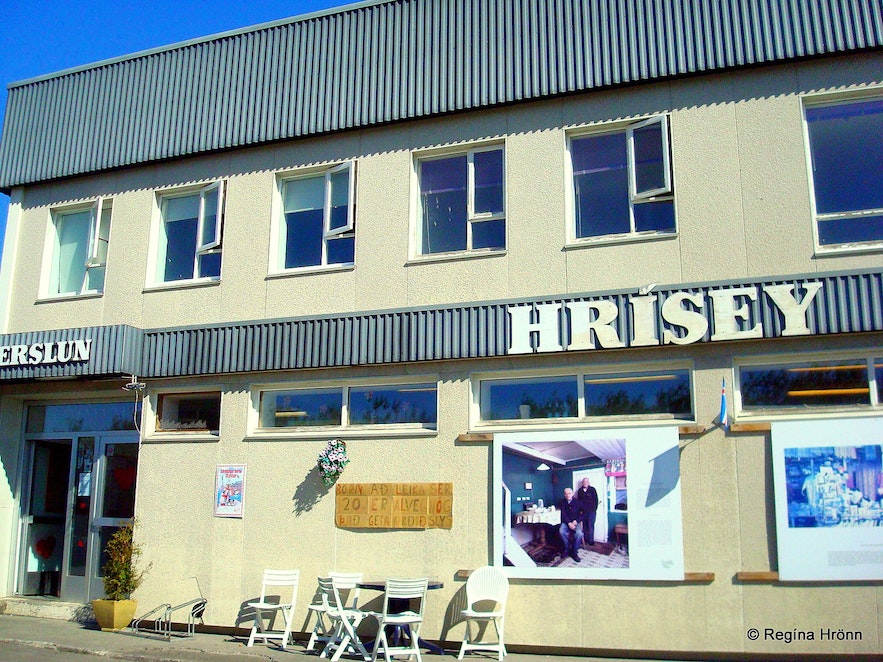 Hrísey is located some 416 km away from Iceland's capital city, Reykjavík. To visit this area you can rent a car in Reykjavík and drive up to Árskógssandur and catch the ferry to Hrísey.

It is so much fun visiting this area and there are just a myriad of interesting places to visit and things to do around here. 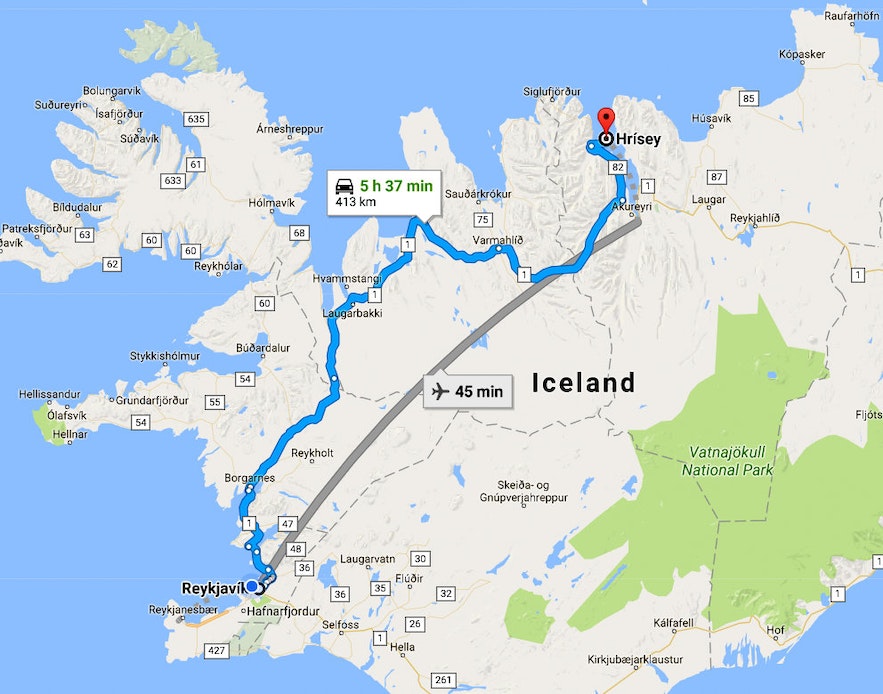 This is part I in my series of travel-blogs on Eyjafjörður fjord - join me on a tour of the longest fjord of North-Iceland:

Have a lovely time on Hrísey island :)