Now, this travel-blog of mine is a bit different from my other travel-blogs at Guide to Iceland, where I focus on interesting sights to visit in Iceland.

But I am now going to introduce to you a genuine Icelandic product; the first whiskey distillery in Iceland producing whiskey from 100% Icelandic barley; Eimverk Distillery.

Top photo: The guide Rökkvi introducing Eimverk's whiskey to us 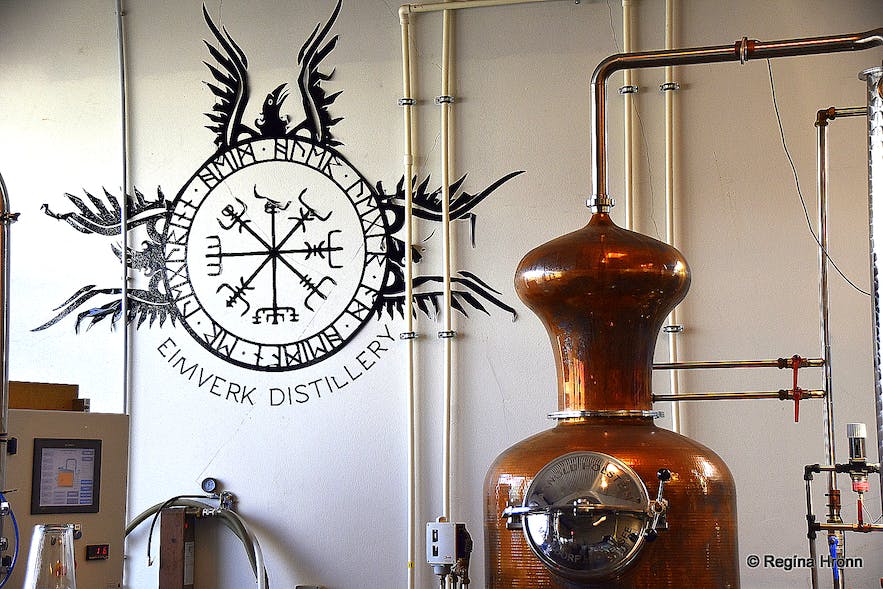 You may remember him from my travel-blog Stand-up Comedy in Iceland - the Comedy Club & the Golden Gang - Come Talk Funny - a Show in English. See my top photo.

They needed an additional guide so we went to check it out. 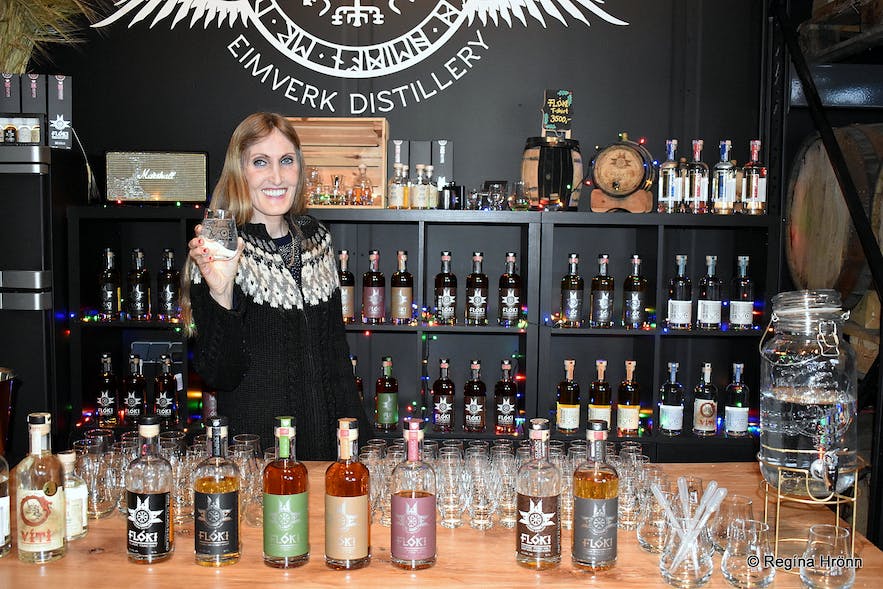 From my 3rd guided tour of Eimverk distillery

Eimverk is a family-run distillery, founded in 2009. It took the family 4 years and 163 trial distillations to perfect their whiskey. So it was only in 2015 that the first batches of Icelandic whiskey were ready for the market; the Flóki Young Malt.

In Scotland, they have around a 400-year-old history of whiskey making, and Iceland has got 10 years of experience now :)

Eimverk Distillery is Iceland's only whiskey distillery, but it also makes gin and brennivín (aquavit) from local ingredients. You will meet the guide at Eimverk Distillery and get a taste of their fine spirits (4-5 samples). 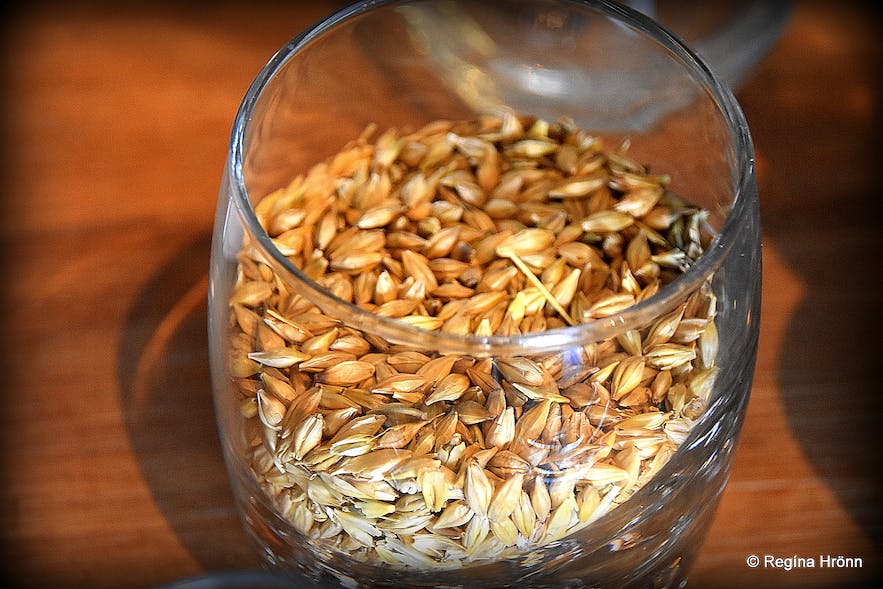 Then you will be shown around the factory and get acquainted with the techniques and the range of types of equipment, beginning with the dried barley itself. In the factory, you will be guided through every step of the distillation process.

Take into account that our young history with whiskey is due to the fact that we couldn't grow barley in Iceland from the 13th century, when a cold period started in Iceland. The Vikings grew barley from the Settlement of Iceland until the 13th century, but it wasn't until around 30 years ago that we were able to start growing barley again when it started getting warmer in Iceland. 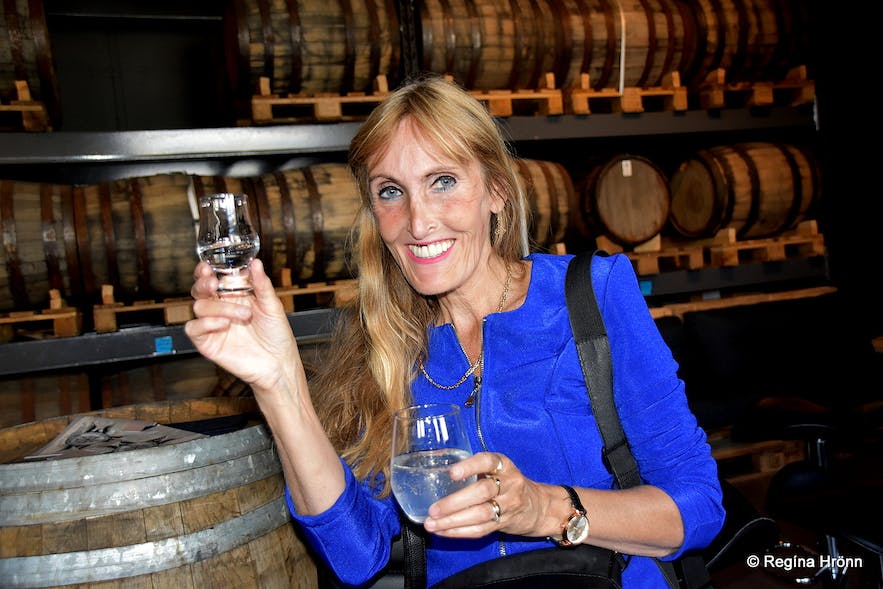 The Icelandic barley is different from other barley. Because of how cold our summers are it grows a bit slower, which makes the husk thicker and gives it more taste.

It is lower in starch and sugar compared to the barley grown in Norway or Sweden, so we get less alcohol per batch, but a more earthy taste. 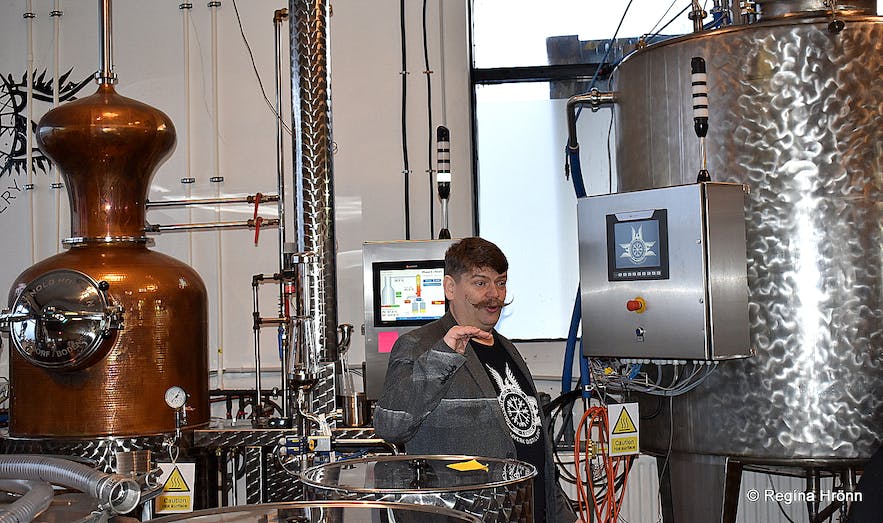 My husband giving us a guided tour of the whiskey distillery

After the tour of the brewery, it was time to sample more of their spirits! Be ready for tasting some 9 spirit samples, all in all, one of which is Navy Strength Gin (57%) - and have the number for a local taxi ready to drive you back ;)

You will be introduced to and offered to taste the premium pot-boiled gin called Vor, the Icelandic whiskey Flóki, and the herb-infused Víti (Hell) which is an Icelandic brennivín. The whiskey has different flavours depending on how long it has been in the barrels. 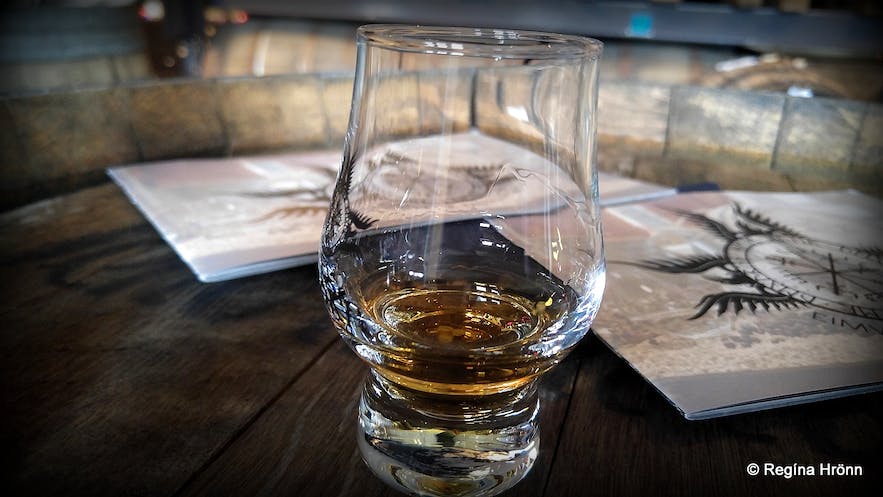 This is how much you will get to sample x 9

This was my first spirit-tasting ever and the guide showed us how to roll the whiskey in our glass to check out its transparency and colour. I must confess that I never saw any difference in transparency, but that is because I am a total amateur ;) Connoisseurs would for sure spot the difference. 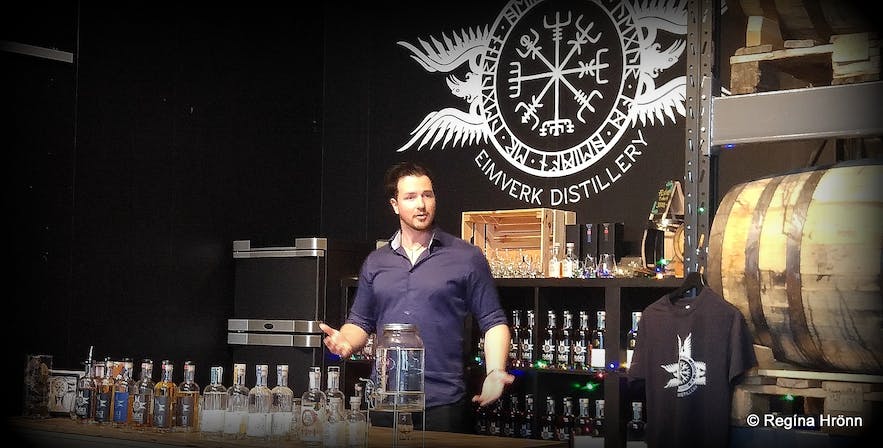 Eimverk latest addition is the Flóki Single Malt sheep dung smoked whiskey, introduced in 2019. Sheep dung smoked whiskey has been described to me by a connoisseur as being so strong that you should only drink it after having had a couple of drinks of other whiskeys before you drink that one. And that it burns in the throat after drinking it. 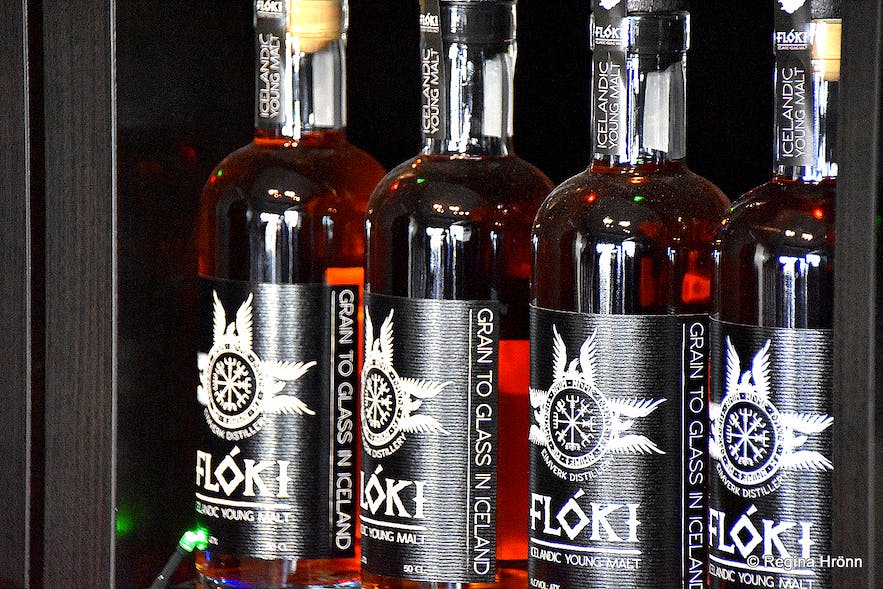 But then his brother came along and took a sip and said it was very good whiskey and that he liked it a lot :) So you have to try it and find out for yourself!

On the 3 occasions when I joined the tour there were around 12-15 people attending. On several occasions during the spirit tasting, people were knocking on the door asking if they could buy Icelandic whiskey.

But seeing that in Iceland there is a state monopoly on selling alcohol, then it can only be bought in Vínbúðin, our state-run liquor store. But you can also buy this product at the Duty-free at Keflavík international airport. 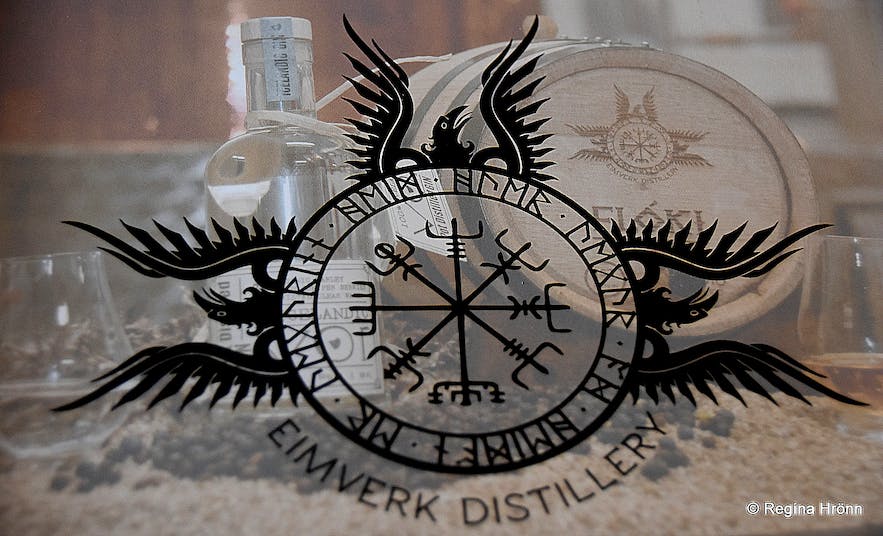 Eimverk used to be a hidden secret, but the secret is out and the spirit tasting has become a very popular activity, so guided tours are offered every day. I only ever heard about Eimverk and this guided tour in 2019 - I don't know how I missed visiting them.

Most Icelanders I have talked to regarding this didn't know that Icelandic whiskey was produced in our country. 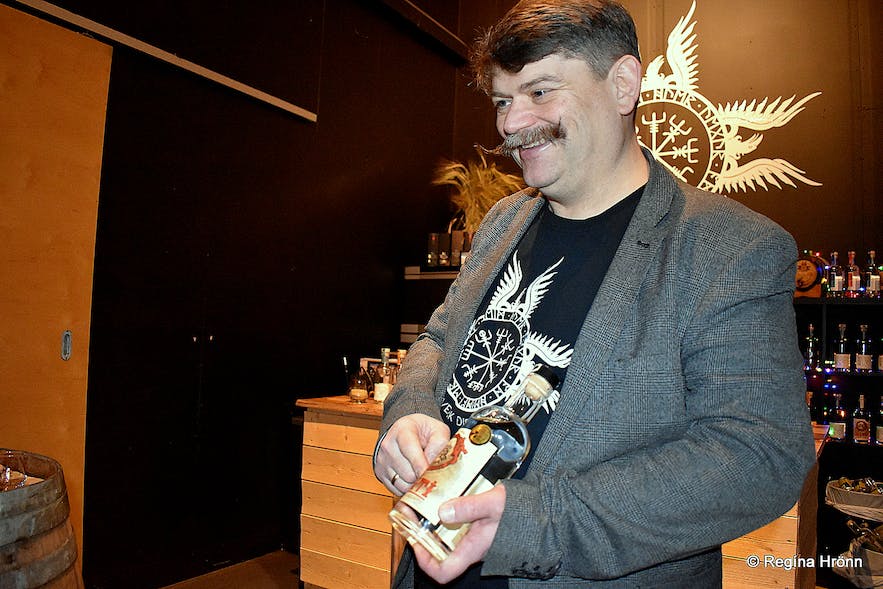 Guided tour number 3 - my husband is now working for Eimverk

Eimverk's tour is for sale here on Guide to Iceland:

So this unusual travel-blog of mine, even though I write in English, is also aimed at my countrymen, and not only an introduction for our foreign visitors :)

The Eimverk Distillery is located at Lyngás 13 in Garðabær town, which is a part of the Great-Reykjavík area, approximately 10-15 minutes drive away from Reykjavík's city centre. Have fun :)