But there is one pool in particular which I have deliberately not written about before, and that is Hrunalaug in Hrunamannahreppur rural district in South-Iceland. I did not want to draw attention to it as it is privately owned. But after reading the recent news reports regarding this pool, I want to tell you a little about this lovely gem in nature. 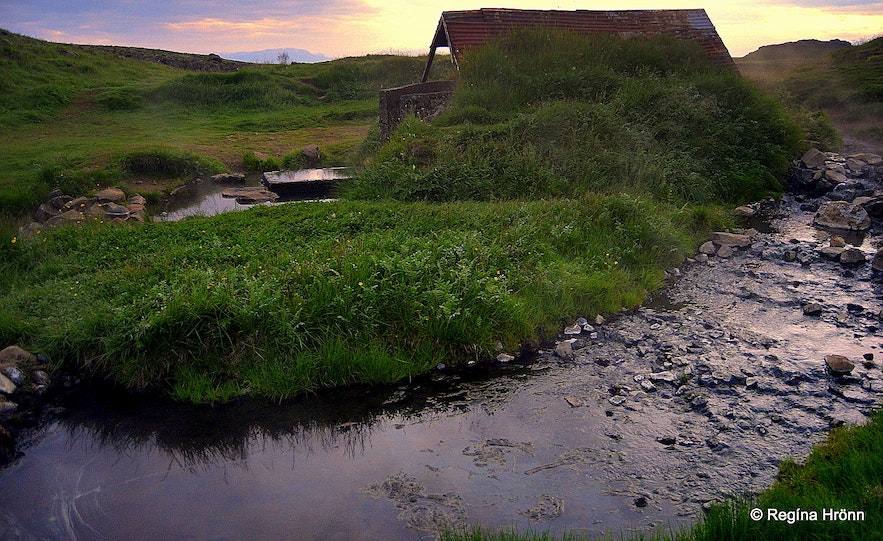 Soaking in hot pools is very popular amongst tourists and locals alike and few things beat soaking in a lovely warm pool in the middle of a bright summer night after a long day of travelling in Iceland. I have only visited Hrunalaug once and will not visit it again out of respect for the owners of the pool.

My photos of Hrunalaug were taken in the middle of a June night 6 years ago after a visit to Gjáin and Háifoss waterfall.

During our visit, there were only a couple of other considerate travellers in the pool who just wanted to enjoy the serenity of the bright summer night and the warmth of Hrunalaug. 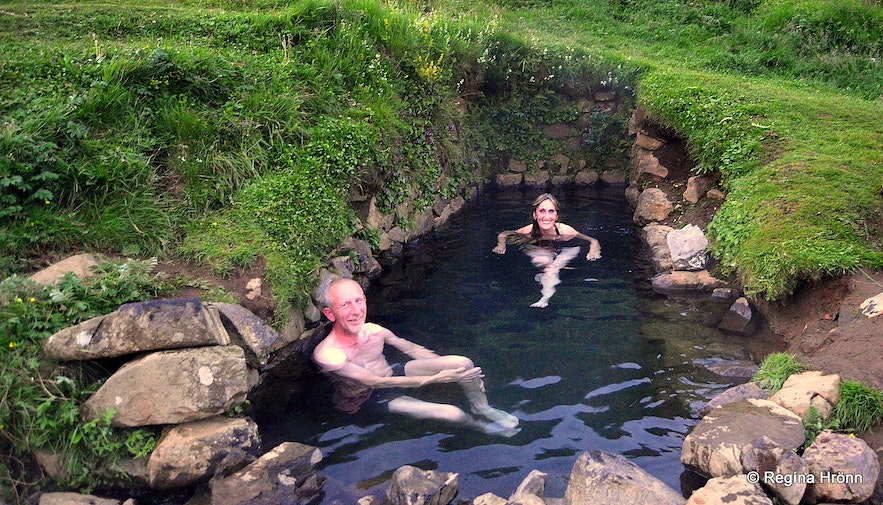 But then it came to my attention that some visitors behaviour so saddened the owners of this lovely pool that the owners were even at one point thinking of destroying it with a bulldozer. Inconsiderate visitors had been leaving a lot of rubbish by the pool, so the owners had to regularly clean it.

And even the rocks in the pool had been rearranged. These rocks were stacked by the great-grandfather and grandfather of the owners of Hrunalaug and should never be tampered with. 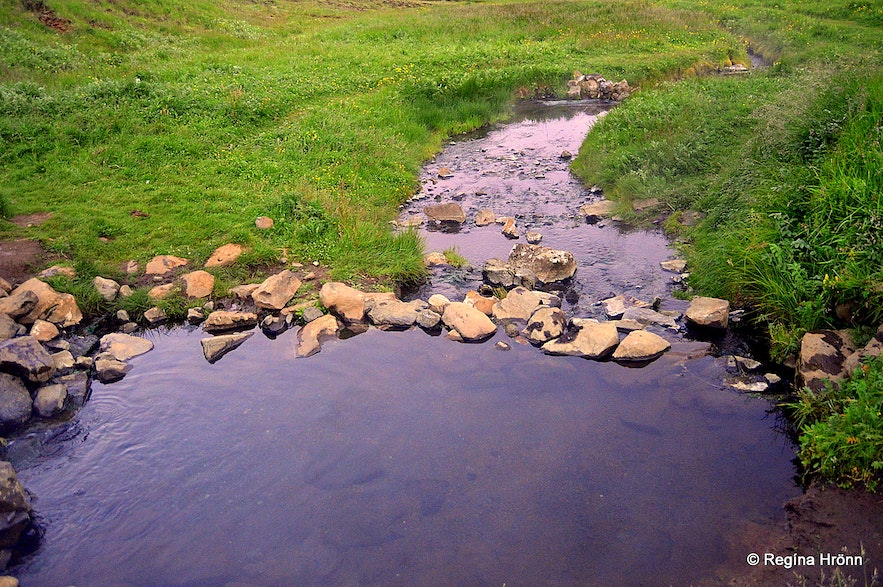 The pool is their private property, and they graciously allow us to enjoy it with them. But there are so many visitors to the pool that they cannot even enjoy soaking in peace in their pool themselves any longer.

So let's show our appreciation by treating this lovely gem with utter respect. Or better still pay a visit to the Secret Lagoon, which is close by rather than visiting a private pool. The Secret Lagoon has got an entrance fee, but there you have showers, a restaurant, and a lovely clean pool where you can also visit a geothermal area. 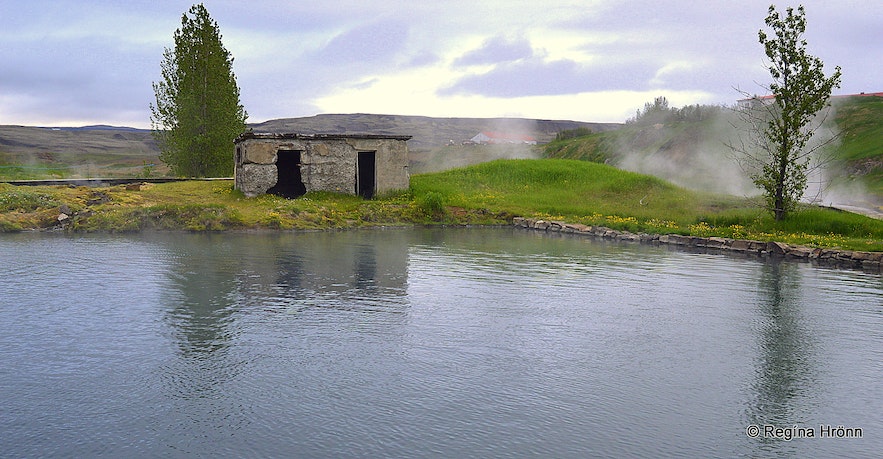 I was so sad when I read the news article in one of our local newspapers back in 2015 that I decided not to write a travel-blog about my visit to Hrunalaug as to not draw attention to it.

In my travel-blogs about Iceland (which are all in all 280 now), I want to show other travellers lovely spots in Iceland, but I do not want to have these lovely spots destroyed. 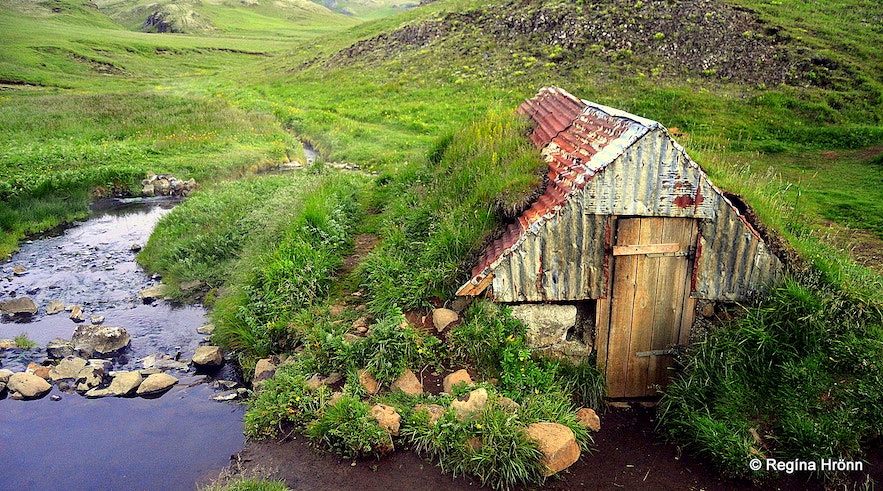 The latest news I read about Hrunalaug was during COVID-19 in May 2020, after the restrictions had been lifted in Iceland. One night the owners of Hrunalaug, who live at Ás farm, woke up to see their precious hot pool in this condition: Mbl. - Hrunalaug!

The article is in Icelandic, but the photos speak for themselves.

Very few, if any tourists, came to Iceland during the restrictions. So this is the work of locals. 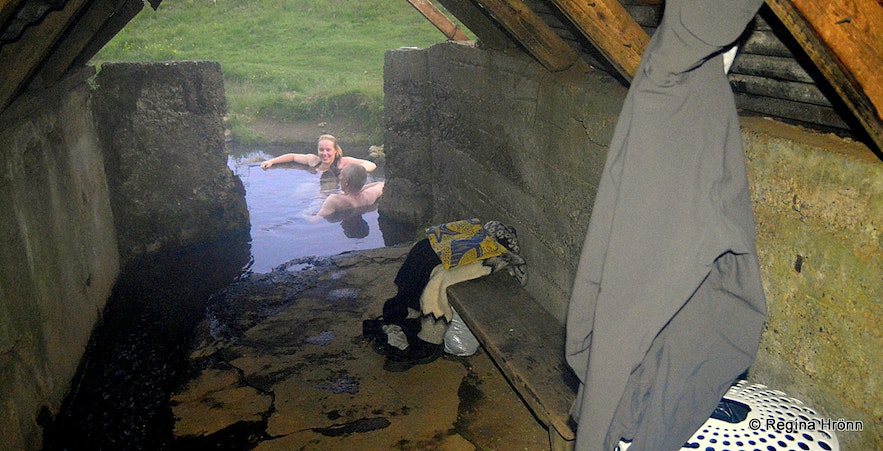 Empty wine and beer bottles were left behind all around the pool for the owners to pick up. It breaks my heart to see that people who were brought up in Iceland, don't have enough love and respect for their own country, but to leave nature in this state.

And these were not locals from the immediate neighbourhood, but people who had driven for some distance to visit the pool. So at least the designated drivers were sober and could have picked up the bottles and trash left behind. The leftover litter filled two big bags!

I am pretty sure that these farmers have other things to attend to than guarding the pool at night and continually picking up litter around the pool. 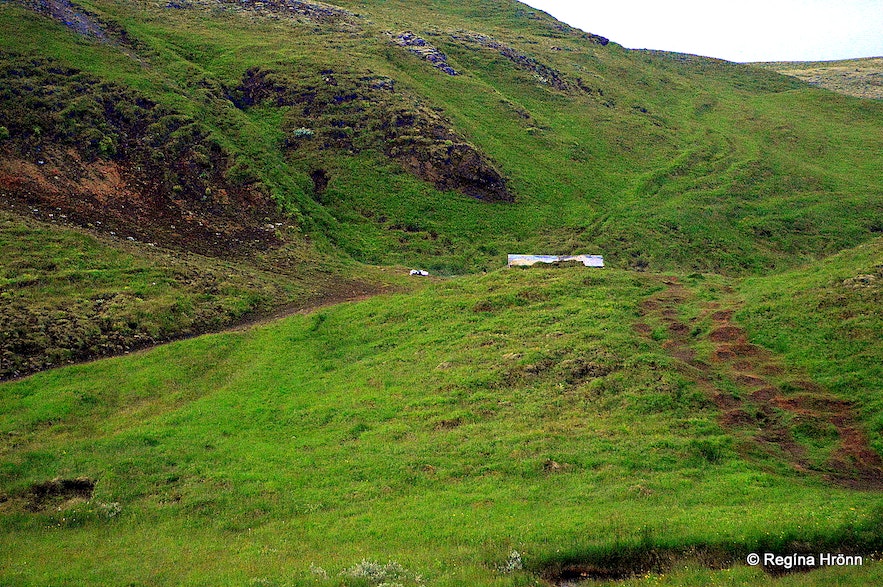 The path leading to Hrunalaug pool

The owners want to keep their family pool open and allow us to enjoy it with them. So let's join hands and treat this little gem of nature with respect. Let's leave nothing behind but our footsteps. 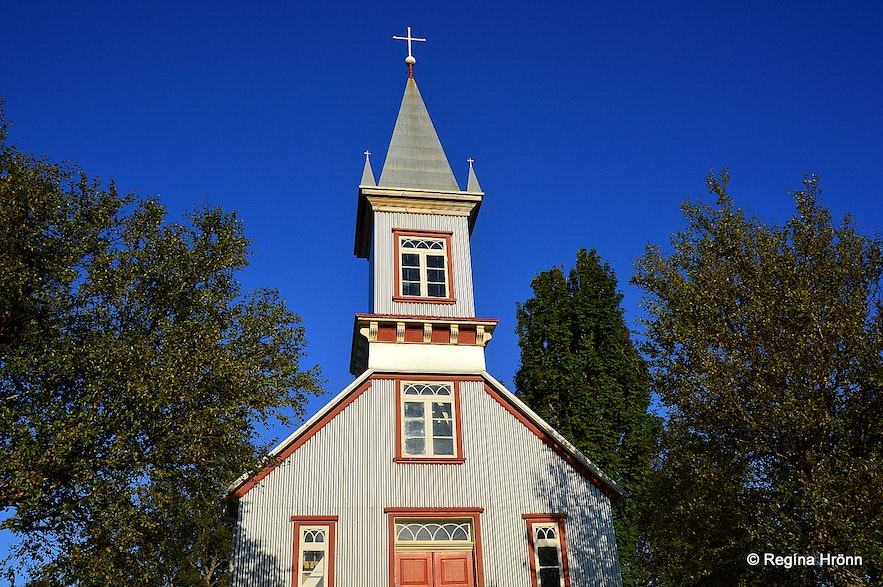 The current church at Hruni

There is an account in Þjóðsögur Jóns Árnasonar - the Compilation of Folklore by Jón Árnason, which tells us that partying was not unknown at Hruni in the old times.

Although this seems to have been an urban legend as I have also read a similar account for other churches in Iceland, like Skinnastaðakirkja church up north. 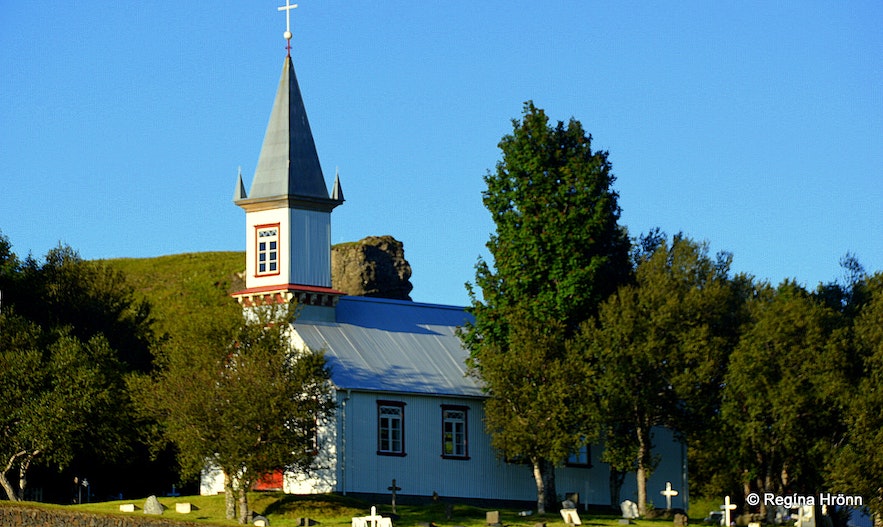 "Once upon a time in ancient times there was a priest at Hruni in Árnessýsla county. He loved entertainment and partying. When the congregation gathered in the church on Christmas Night, the priest would not hold mass but had a big party where he enjoyed dancing with the people of the parish.

There was drinking and the playing of cards and other indecent gaiety until the small hours of the night.

The priest had an old mother by the name of Una; she was profusely opposed to her son's conduct and often criticised him for it. But he didn't care and carried on with this partying on Christmas Night for many years.

One Christmas Night the dancing carried on further into the night than usual. His mother, who was both foresighted and psychic, went to the church and asked her son to stop the dancing and start the mass. 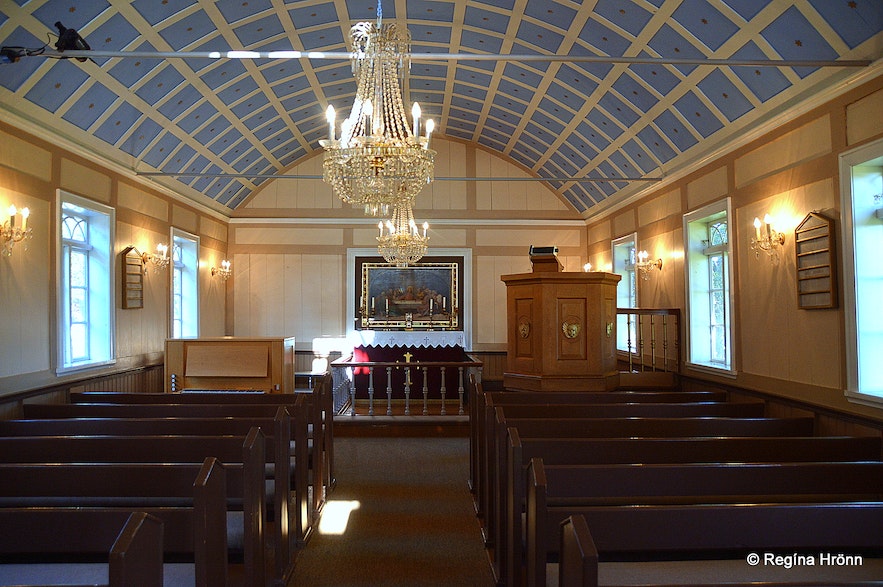 But as his mother walked down the aisle away from her son for the 3rd time, she heard this verse and learnt it by heart:

When Una exited the church, she saw a man standing outside the door, she didn't know him, but disliked him and gathered that he had composed the verse.Una was very startled and realised that things would be turning terrible as this would be the devil himself. 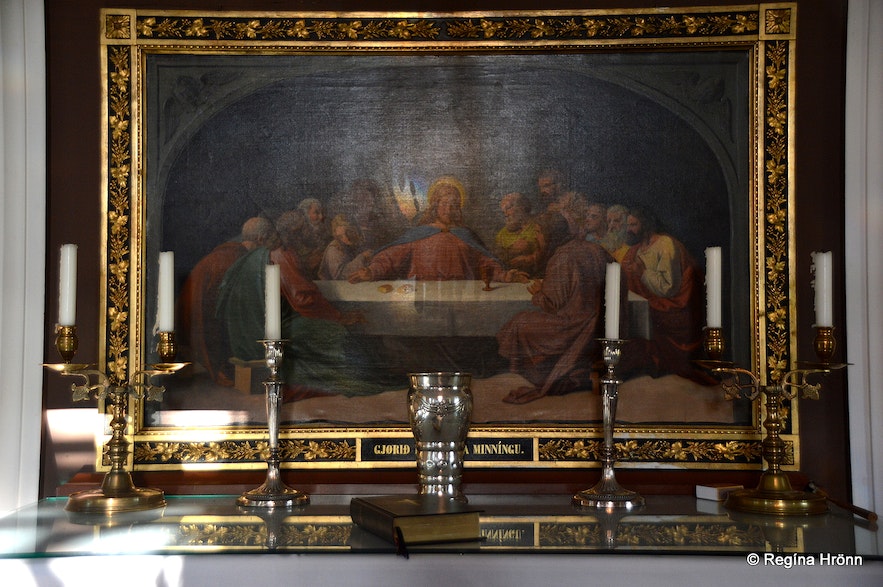 The altarpiece in Hrunakirkja church

Una took his son's riding horse and rode as fast as she could to the nearest priest and asked him to come with her to solve this matter and free her son from the danger he was in.

That priest rode with Una and brought with him many men, as his congregation, who had attended the mass on Christmas Night, had not left him yet. 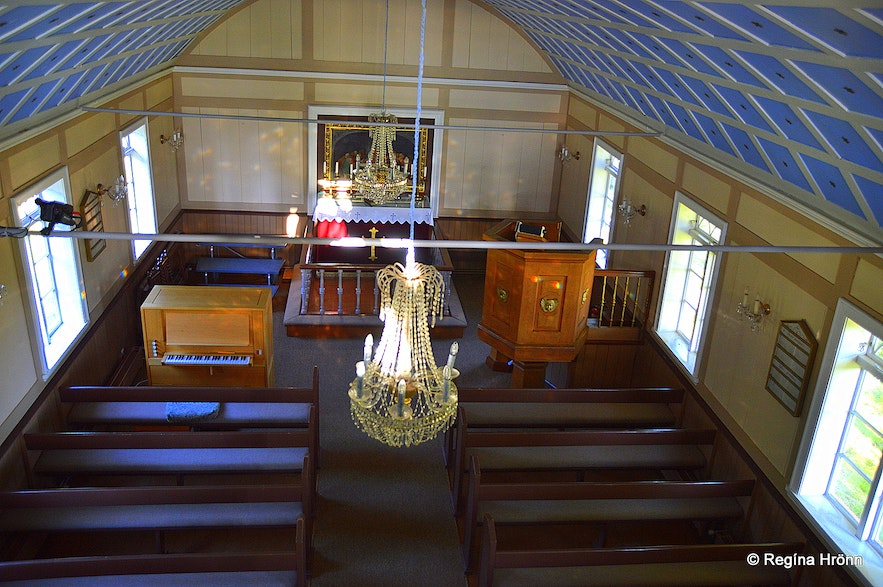 But as they arrived at Hruni, the church and the graveyard had sunk with all the people inside, and they heard whining and howling down in the ground. You can still see evidence of the fact that a structure had stood up on Hruni, which is the name of a hill, and the farm standing below it is named after.

The story goes that the church was moved below Hruni, where it currently stands, and never again was there dancing in the Hrunakirkja church on Christmas Night". 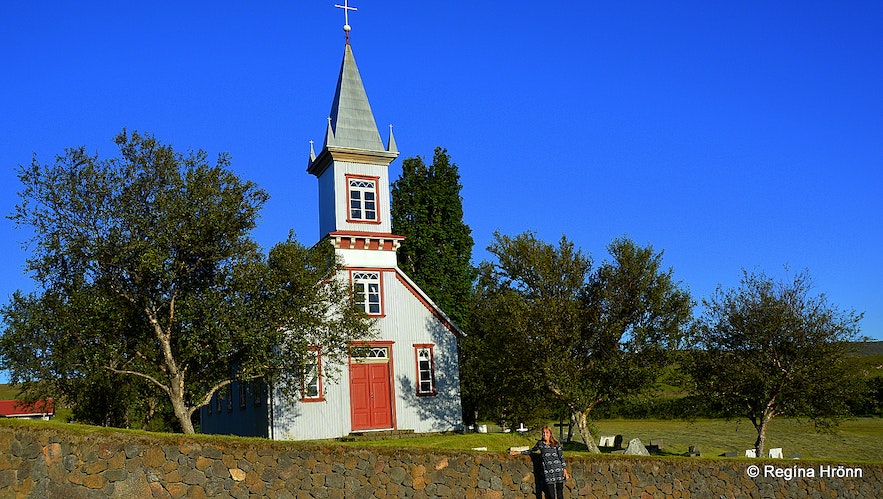 If you want to visit some hot springs in Iceland then I have written three travel-blogs about hot pools:

Have a lovely time in Iceland and let's always show respect by the natural pools of Iceland!