I recently went whale watching in Akureyri, the capital of North Iceland. This was the second time in my life that I have gone whale watching, and after the Whale Watching Akureyri tour I can tell you that I am now hooked, so to speak. We saw so many whales that I was astounded.

I was staying in Akureyri for a week for my summer vacation and was referred to the whale watching company Ambassador, which has now merged with Elding Adventure at Sea.

Top photo: a whale on the whale watching tour 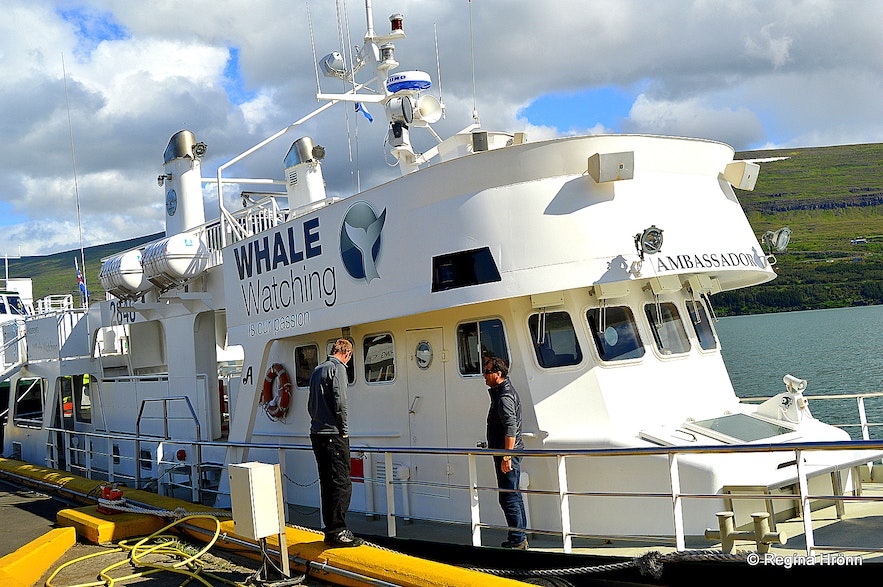 I remember back when I was a kid in Reykjavík that seeing a whale was a rare thing. I remember only a couple of occasions when there were sightings of whales, and they were so far away that we could barely see them standing onshore with binoculars.  Back then there were no whale watching tours.

We saw a myriad of whales, it was just unbelievable, there was just one Humpback whale after another, some came very close to the whale watching boat and others were a bit further away and others far away. We could see them blowing all over Eyjafjörður fjord, Iceland's longest fjord. I was ecstatic as I had never seen anything like it before! 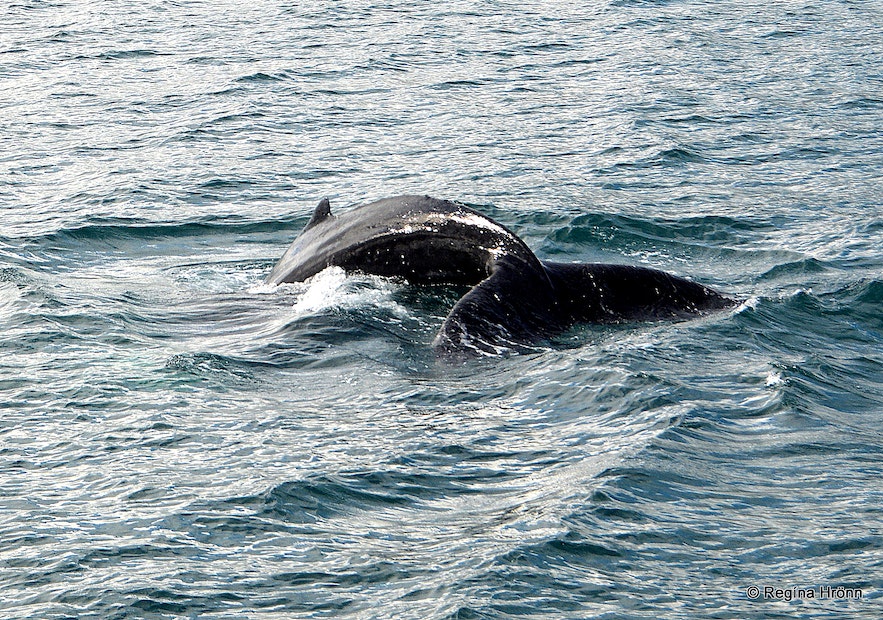 I have seen excellent photos from whale watching tours and even photos of Humpback whales jumping in the air. I took many photos but should have put the camera on multi-shots as I was too slow at times to react. Next time for sure as I want to go again. I will not stop going until I see a Humpback whale jumping!

Humpback whales are very curious animals, so they have been labelled "the most entertaining whales" as it were, as they swim right up to the boats to have a look at the people aboard. They love to jump and splash their fins and sometimes they stick their head out of the ocean in a move called the spy-hopping :)

They are preserved so their number is ever increasing. Their main enemy now is the killer whale, who is after the Humpback whale calves :(

We cruised through the best whale watching areas and spotted so many whales. The guide told us where to look (10 o'clock - 12 o'clock) and explained to us what the whale was doing. I took a short video of one whale and you can hear the guide talking. It was very helpful.

The locals know where to go to look for whales so I was in good hands. They know that farther out in the Eyjafjörður fjord the sea is relatively calm making it a perfect spot for whale watching.

The Ambassador boat is specially modified for whale watching, with 6 viewing platforms and a top deck for watching the whales. I think the top deck must be the most popular spot on the boat, as it is always full. Must try it out next time! 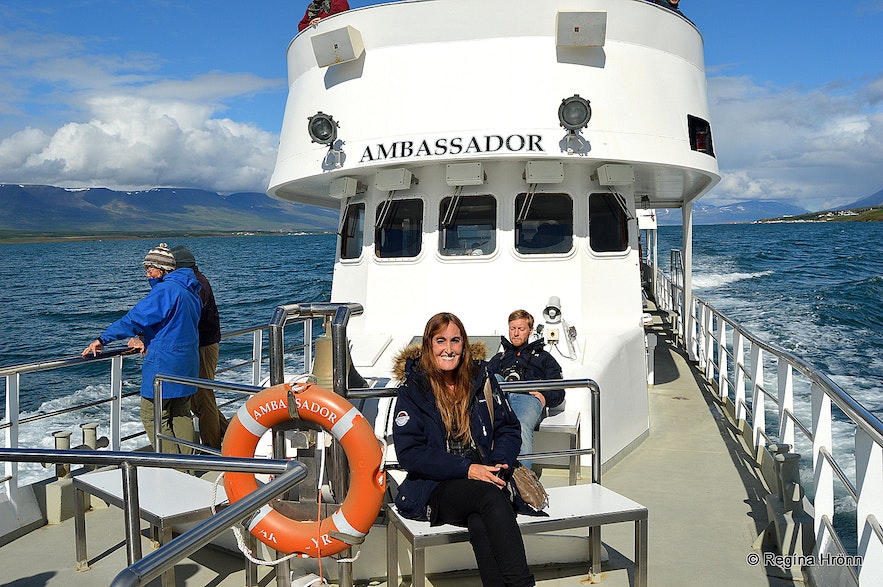 There is a bar/café on board where it is possible to buy some snacks and drinks. I preferred staying outside the whole time on the lookout for whales. Also, the weather was perfect for whale watching, sunny and relatively warm. Remember to dress well though as it can get cold out at sea, especially when the boat is sailing.

This is Iceland, so even though you go whale watching in the summertime I would recommend that you wear a parka and bring a cap. I had my cap with me, a scarf and gloves. That way it will be a more enjoyable experience being able to stay outside watching these beautiful creatures. 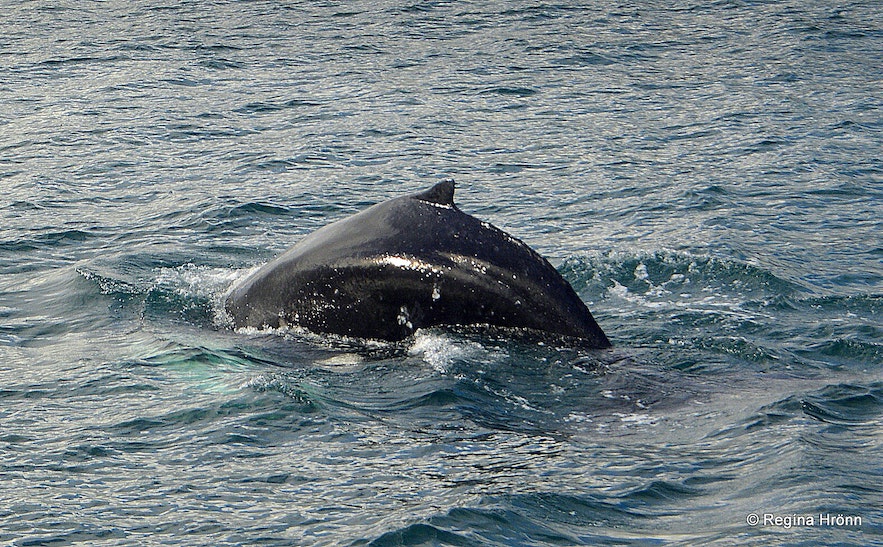 All of a sudden as we had sailed for a while the fjord became ever so lively - it was amazing watching all these whales fluking and blowing. We could see the back and tale of many of the whales, but they didn't show their stomach or face this time around - I would have loved to see that!  Hopefully next time! 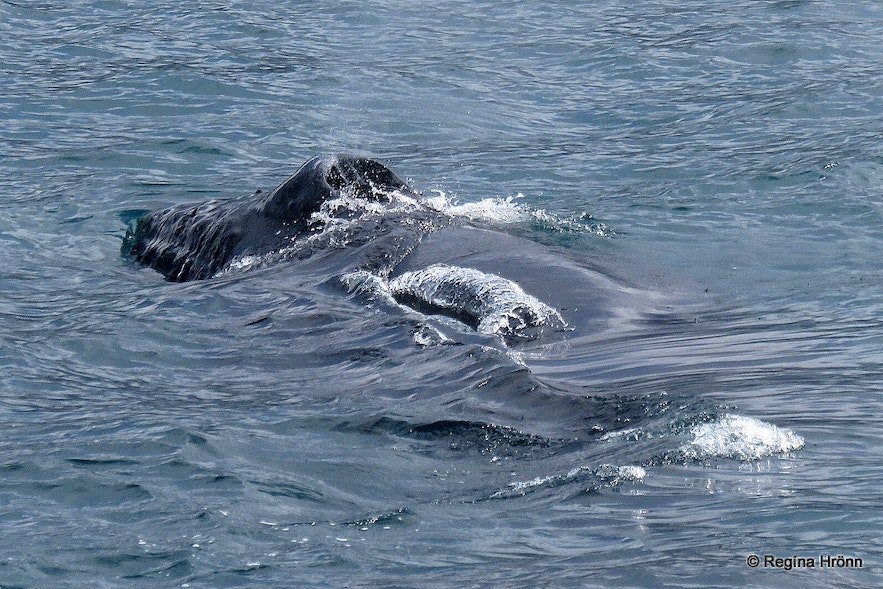 Our guide told us about the fjord's ecosystem and the life of the whales in general. Humpback whales are generally 13-18 metres long and weigh from 25-40 tonnes.

The Humpback whales migrate in wintertime and swim to the Caribbean to mate and to give birth in their breeding and calving ground. The guide told us that the baby calves, who weigh approximately a tonne when they are born, drink up to 600 litres of milk daily and their mothers don't eat anything while in the Caribbean. They come to Iceland to fatten up here in their feeding ground in the cold waters of Iceland.

Humpback whales belong to the rorqual genus of whales and feed mainly on krill, plankton and small fish like herring, capelin, eels and pollacks.

Eyjafjörður fjord is the feeding ground of humpback whales from the beginning of May until November. During this period of time the Ambassador cruises through their feeding ground. That is why we were seeing so many whales at this location. 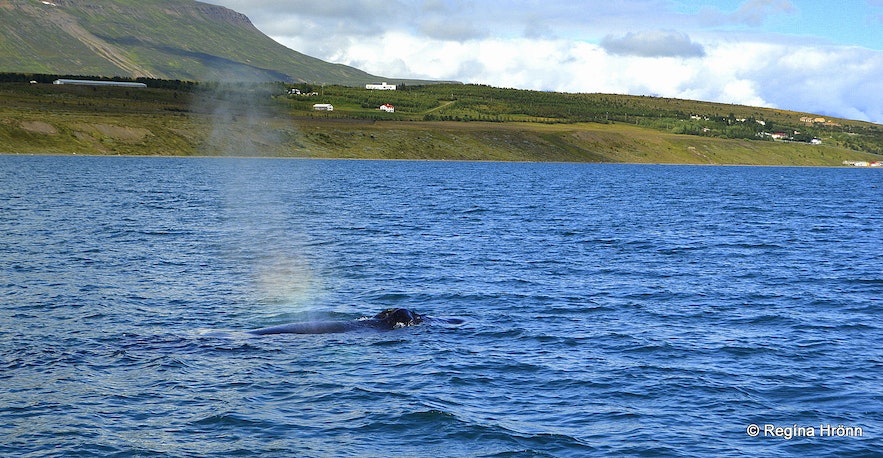 We could see the Humpback whales blowing in many places in the fjord. If you look closely at the photo above you can see that I caught a rainbow above the whale while it was blowing - it is so beautiful! I couldn't see the rainbow while I was taking the photo, so it came as a surprise :)

It was the first time I ever saw a whale blow and I was so impressed and touched somehow. Their blow is said to be bushy as it is so big. Humpback whales are also known for their acrobatics - and I am waiting in anticipation to see a Humpback whale jumping!  That would be a dream come true for me :)

When the whales dive again they fluke, i.e. wave their tail, which is a beautiful sight. Their tail is unique, as the human fingerprint and in my photos of the Humpback whales, you will see how different their tails are when they fluke.

In the photo below you will see how different the fluke of this Humpback whale is compared to the other one. It is black with white stripes in the middle. This is so characteristic of the Humpback whales - they have patterns on their fluke. It is so lovely thinking about their fluke as being their fingerprints. Now I have developed an interest in whale flukes and want to try and take photos of different flukes :) 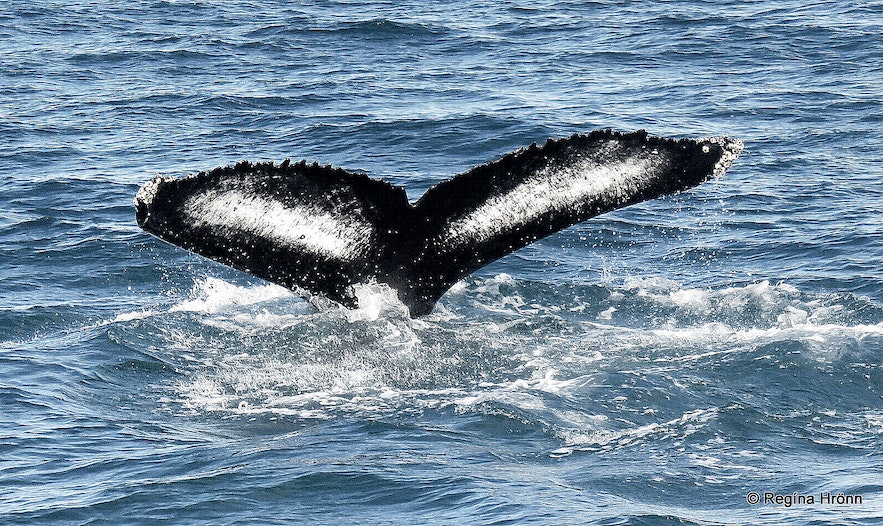 After fluking the Humpback whales dive - usually for some 6 minutes. Before they dive they come up approximately 4 times to breathe and that is when it is good to take photos - and of course, when they fluke, that makes for an awesome photo, in my opinion.

The Humpback whale flippers or pectoral fins are white on the North-Atlantic Humpback whales and are extremely long - they are as long as one-third of the whole length of the whale!  They are classified as being "big-winged" :)

It is not only the fluke and the huge flippers that is characteristic of the Humpback whales, but also the lumps of tubercles on their face, as it were, and on their flippers. Inside each of the tubercles is (strangely enough) one stiff hair! It is believed that these whales used to have fur and that these stiff hairs are remnants from that time.

Another whale watching boat we saw on our tour

The RIB boats can get really close to the whales without disturbing them too much.

We could see the RIB boat from our boat and our boat followed it when it took off to get closer to whales they had spotted.

In this travel-blog, I have only been talking about Humpback whales as they are the whales we saw in abundance on this tour. But there are other whales, which can be seen in Eyjafjörður, like the Minke whale, the White Beaked dolphin, which is the most common dolphin seen in Iceland, the Harbour Porpoise, which is the smallest whale species, the size of a human being, I have been told, and the Blue whale, which is the largest animal on earth.

There is yet another whale, which can be seen in Eyjafjörður - the Northern Bottlenose whale - a very distinctive, cute whale with a short snout and a high forehead - which gives this whale the Disney-look so to speak. In 2008 two Northern Bottlenose whales were seen swimming in the fjord by Akureyri town. They stayed in the so-called Pollurinn by Akureyri town for weeks.

Then two more joined them, one of which died, then another two, so for a while, there were five Northern Bottlenose whales swimming and showing their acrobatics in Pollurinn by Akureyri. I was travelling in this area back in 2008 and remember crowds of people standing by the harbour on the lookout for these cute whales. I saw a couple of them :)

The whale watching tours start from Torfunesbryggja wharf right by the very centre of Akureyri town, the capital of North-Iceland. You can see how close they are to the street in my last photo, which I took when we had returned back to the harbour. This fantastic tour had lasted for exactly 3 hours and we were very satisfied with the results.

This tour is available from May until the end of October and has from 2-6 departures depending on the season.

Their sighting rate is very high, 99%, which is almost a guarantee for seeing whales on any tour. But given that this is the animal kingdom and nature we are dealing with here, then a second tour is offered for free just in case. 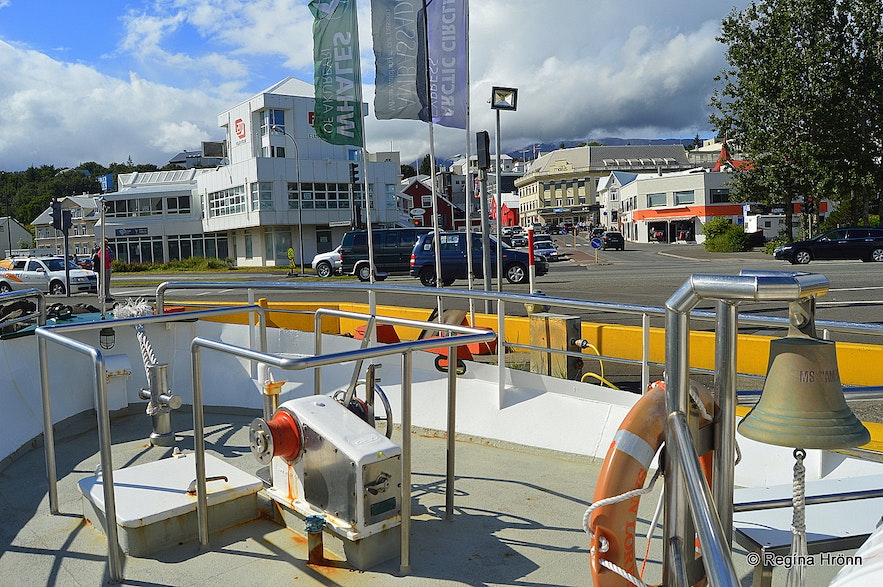 I thoroughly enjoyed this tour and saw more whales than I dared to expect. When you visit Akureyri do not miss seeing the whales. I was so excited about seeing so many whales that I joined another of the Ambassador's tours to Grímsey island - called the Arctic Circle Express. Unfortunately, that tour is no longer available as in certain wind directions people got very sea-sick on that route.

All the wonderful Tours of Elding Adventure at Sea

Have a fantastic time whale-watching - I hope you get to see a lot of whales on your tour :)