Hveravellir - the beautiful Oasis in the Highland of Iceland

In the central highland of Iceland, you will find a beautiful geothermal area, called Hveravellir or the Hot Spring Fields. It is one of the pearls of Iceland, a nature reserve 650 meters above sea level. After driving through the vast, barren highland it is so lovely to encounter such an oasis.

There was an old route through this area, which is referred to in the Viking Sagas with the first references being from around the year 900. This road is called Kjalvegur road. 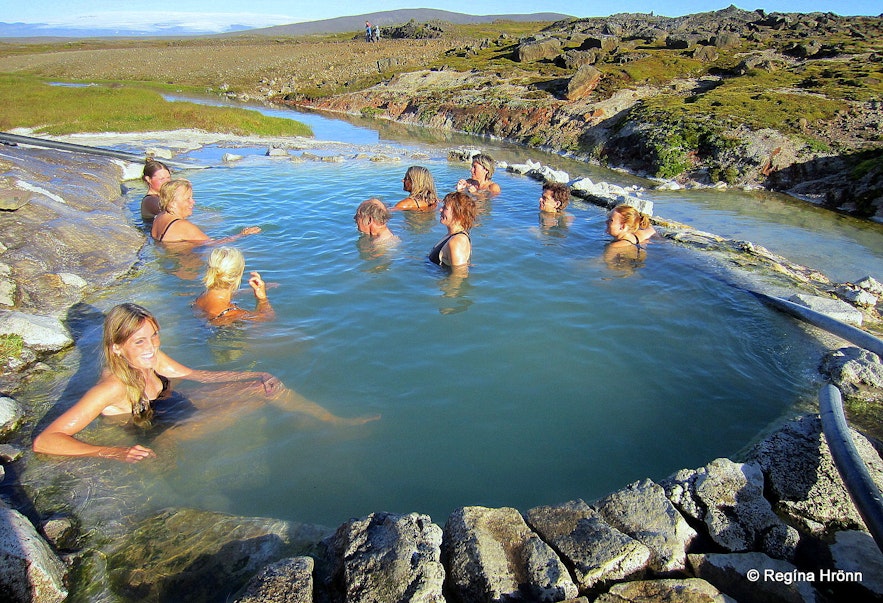 Chilling in the hot pool at Hveravellir

The hot pool at Hveravellir is located in a warm stream and the temperature varies from 18.6-39.3 degrees C. The water in the intake pipe is much hotter though 80-90 degrees C, so let's be careful here. A small dam was built in the stream back in 1950 and this wonderful hot pool was created. 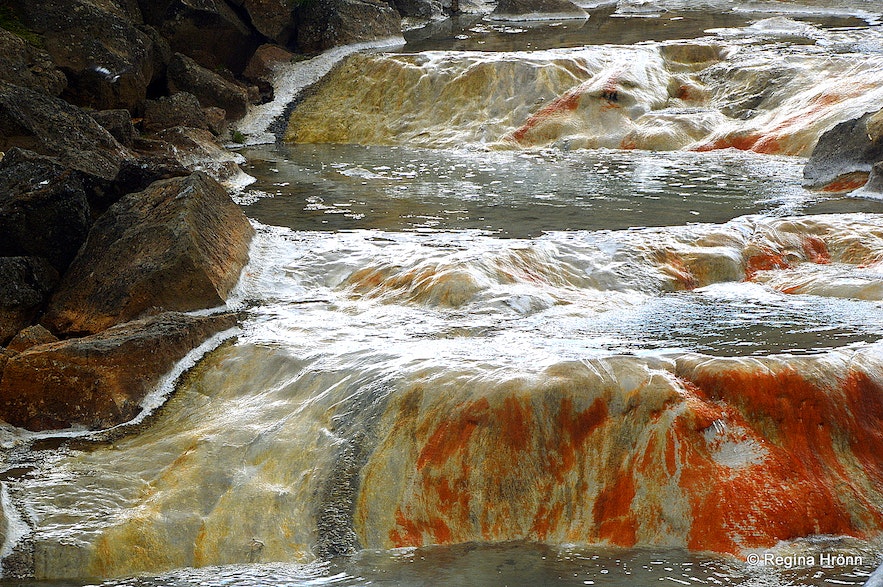 The small river by the pool - geothermal colours

It is ever so nice sitting in this hot pool after hiking in this area. The only problem, in my opinion, is that there are no changing facilities. So I wore my bathing suit underneath my clothes and had to take them off wrapped in a towel after my visit to the pool.

One can change at the toilets, but they are a bit far away. But it is ok, here we are in the highland of Iceland and I don't expect any frills. 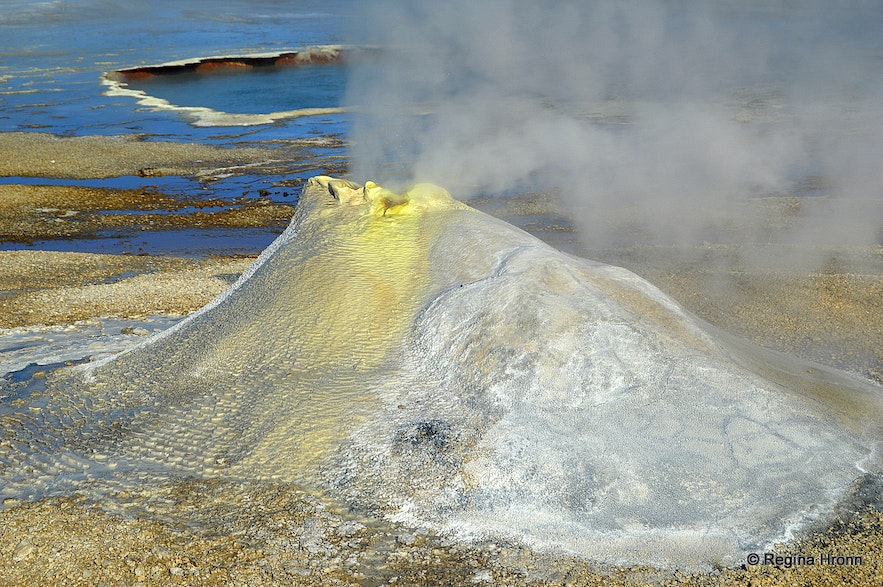 Close to the hot pool, a beautiful geothermal area with multi-coloured boiling mud pools, huffing and puffing fumaroles and beautiful azure hot springs will take your breath away.

The oldest descriptions of Hveravellir date back to 1752, when the travellers Eggert Ólafsson and Bjarni Pálsson wrote about this area in their travelogue.

Eggert and Bjarni named one of the hot springs Öskurhóll or the Roaring Mound because of the sounds coming from it, whistling and roaring.

Öskurhóll has stopped whistling, but it still roaring. 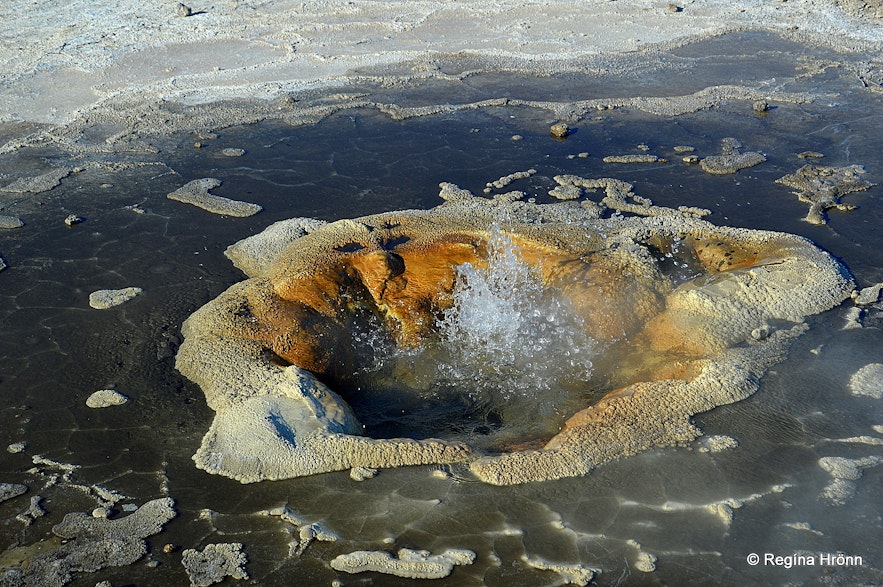 One of the hot springs is called Eyvindarhver or the Hot Spring of Eyvindur referring to the outlaw Fjalla-Eyvindur, who lived here at Hveravellir for some time. This hot spring continuously spouts water.

Fjalla-Eyvindur cooked food in this hot spring. Eyvindur seems to have stacked rubble around the hot spring in order to be able to cook their food here. 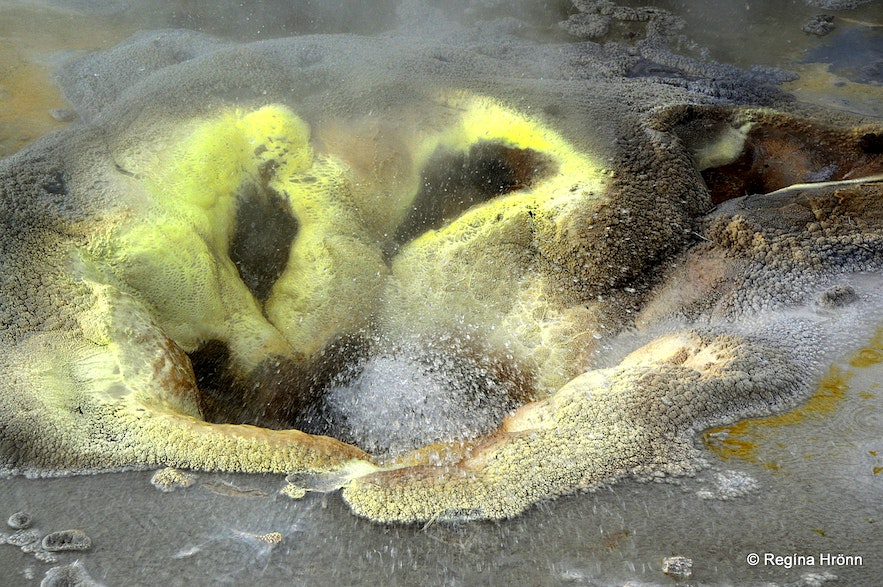 Sulfur has accumulated making the hot spring look like a roaring monster with eyes and a spouting mouth!

And you can hear it roar in my video below, which I shot in the summer of 2018! 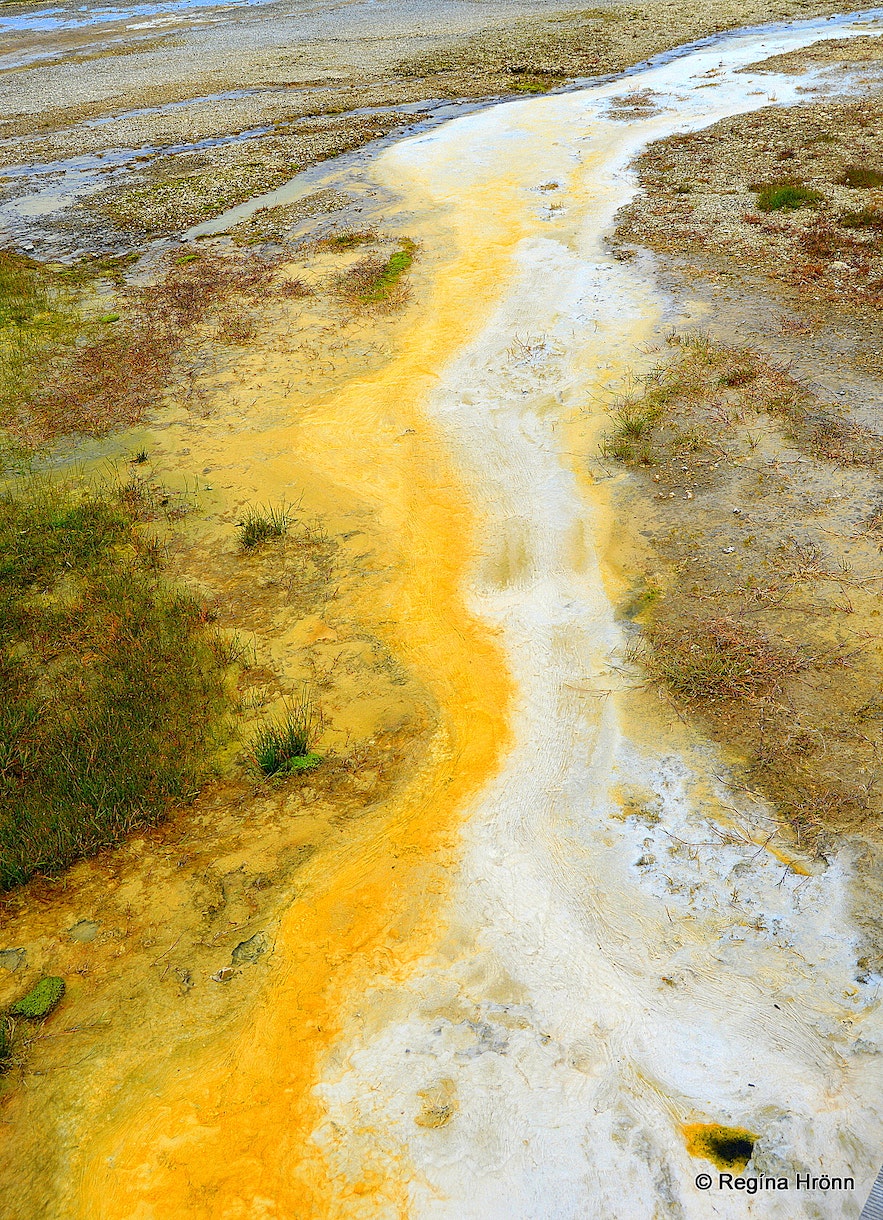 The silica ratio of the geothermal area at Hveravellir is amongst the highest in Iceland, and around some of the hot springs, a beautiful geyserite has accumulated.

I especially like Fagrihver - Lovely Hot spring with the white geyserite complementing the azure blue water. Isn't it pretty? :) 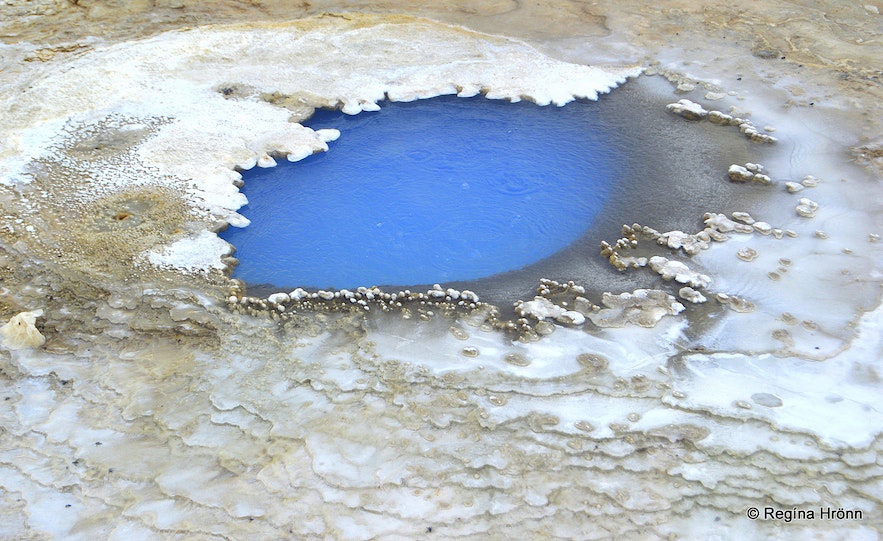 The water in the hot springs is very hot, 70-100 degrees C, so be careful, especially if you are visiting with young children. Always carry small children in the geothermal areas of Iceland. 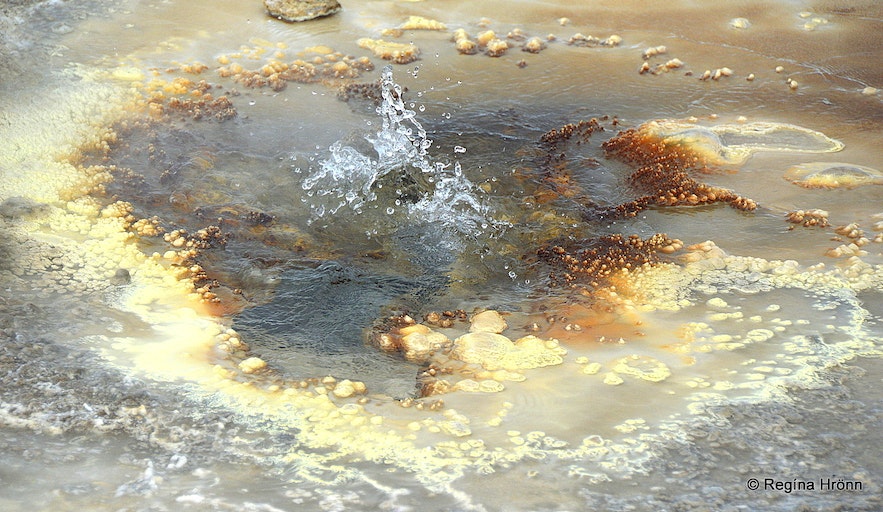 A boiling and colourful hot spring

Magnús Guðmundarson (born in around 1771) had the nickname sálarháski or peril of the souls, as he regarded fishing at sea a life-threatening situation. One of his first "feats" was planning to become an outlaw and living at Hveravellir. 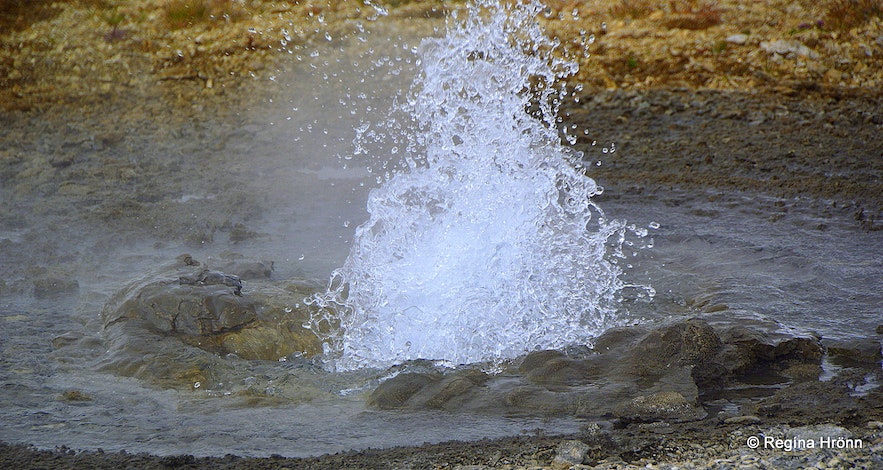 One of the spouting hot springs at Hveravellir

He stole a lamb from the highland pastures, but later told the story that the lamb had bleated pleadingly at him and he thought he heard it saying: "Spare my life, Magnús!"  But Magnús didn't show any mercy and replied to the lamb's lamentations by saying: "No mercy, my dear lamb!"

The lamb cooked into a mush in the hot spring and Magnús could only eat its lungs as they had floated above the water and were raw (yikes - RHR). 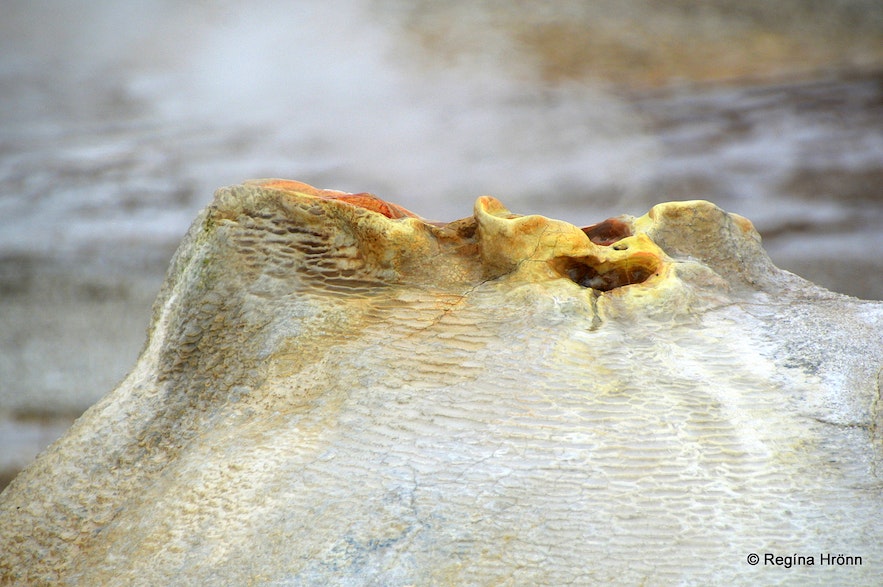 Magnús stayed for 3 weeks at Hveravellir and later told the story that the first week he had lived on raw lamb lungs, the second week on his own saliva, and the third week on the mercy of God and that the last week had been the worst week. From then on he could never eat lungs.

Still we Icelanders have the saying: "Engin miskunn hjá Magnúsi" or "Magnús shows no mercy" which stems from this event. 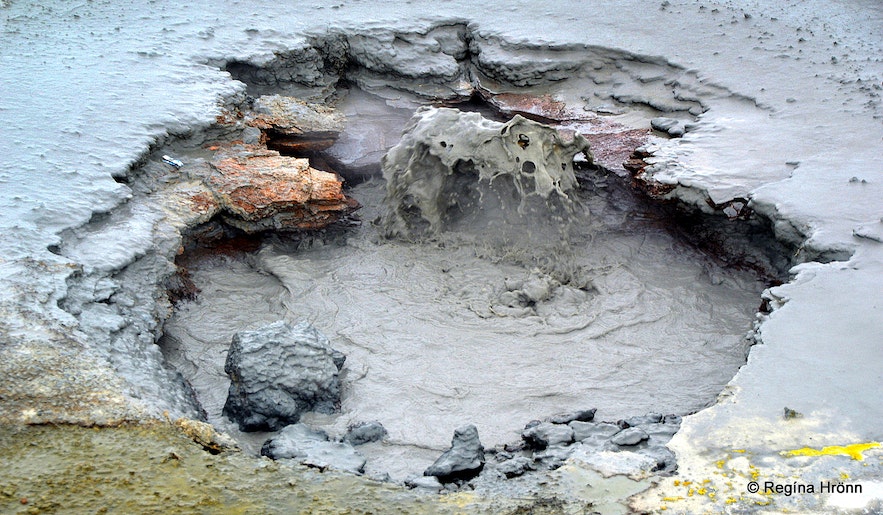 A boiling mud pool at Hveravellir

Hveravellir is located on the edge of the 8000-year-old Kjalhraun lava field and taking a walk through the lava field is amazing, as the lava takes on all kinds of forms and structures. In places, it looks like the earth has just cracked and opened up. And there is steam coming through fissures in the ground.

And once I saw a fox jumping around on one of our walks here. I rarely see foxes in Iceland, but last summer I saw two of them, one here and one in South-Iceland. Be on the lookout for foxes, as I also spotted one when driven on Kjalvegur road.

The courageous outlaws Fjalla-Eyvindur and Halla 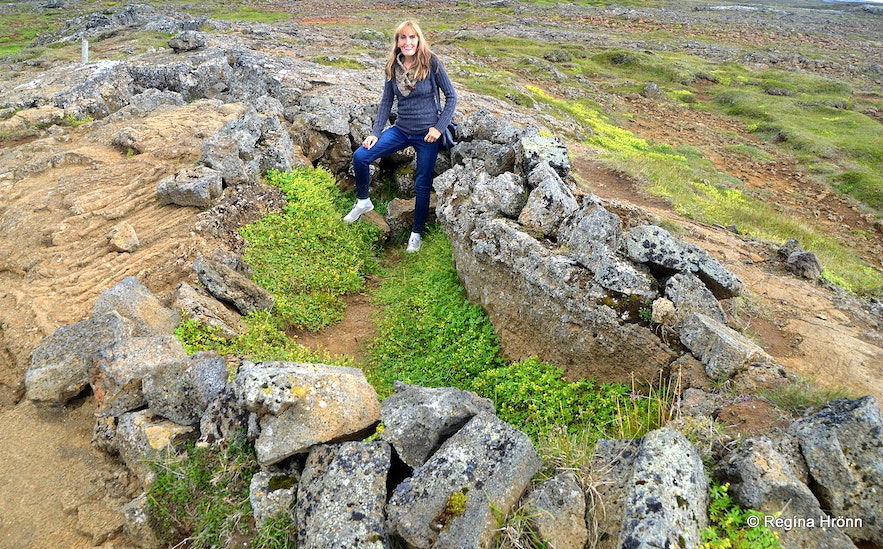 One of our best-known outlaws, Fjalla-Eyvindur (Eyvindur of the Mountains) who lived in Iceland from 1714-1783, lived at Hveravellir for some time with his wife Halla.

Fjalla-Eyvindur was an outlaw for 20 years and lived in the wilderness of Iceland with Halla. I have visited more of his hiding places in Iceland, f.ex. the one at Herðubreiðarlindir oasis.

Remnants from their life here together can be seen at Hveravellir, f.ex. Eyvindarkofi ruins and Eyvindarhellir or the Cave of Eyvindur. 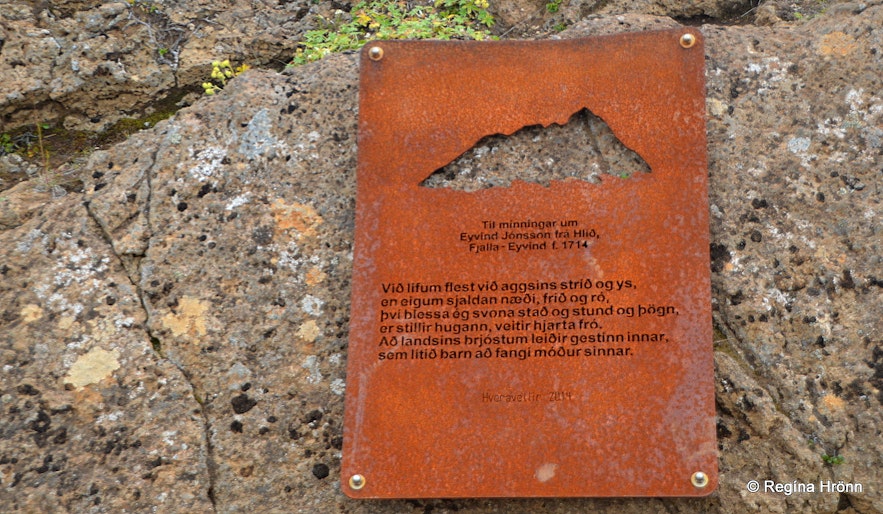 In the photo above you will see the ruins of Eyvindarkofi or the Hut of Eyvindur.

It is a rift in the lava, which Eyvindur and Halla closed up with rocks and turf and from outside it didn't show that this was the dwelling place of outlaws.

Eyvindarkofi is located very close to the hot springs, making it the perfect place for an outlaw in which to live. 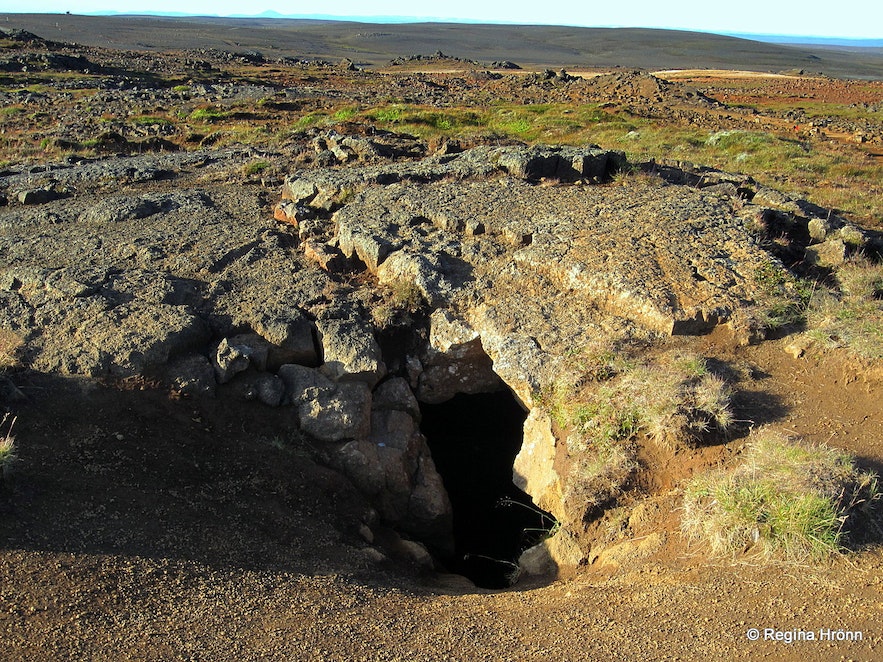 I visited Eyvindarhellir Cave on my hike on the Eyvindarrétt Circle, but there are several good hiking trails here at Hveravellir. This is the shortest hike, 2.57 km, which leads you to an old natural sheep pen, Eyvindarrétt, and the cave.

The cave is just a hole in the ground and can easily be passed by unnoticed. But once you enter the cave you will see how big it really is. Fjalla-Eyvindur was in luck to find such a good hiding place.

We had lunch in the cave before continuing on our hike through this interesting terrain. 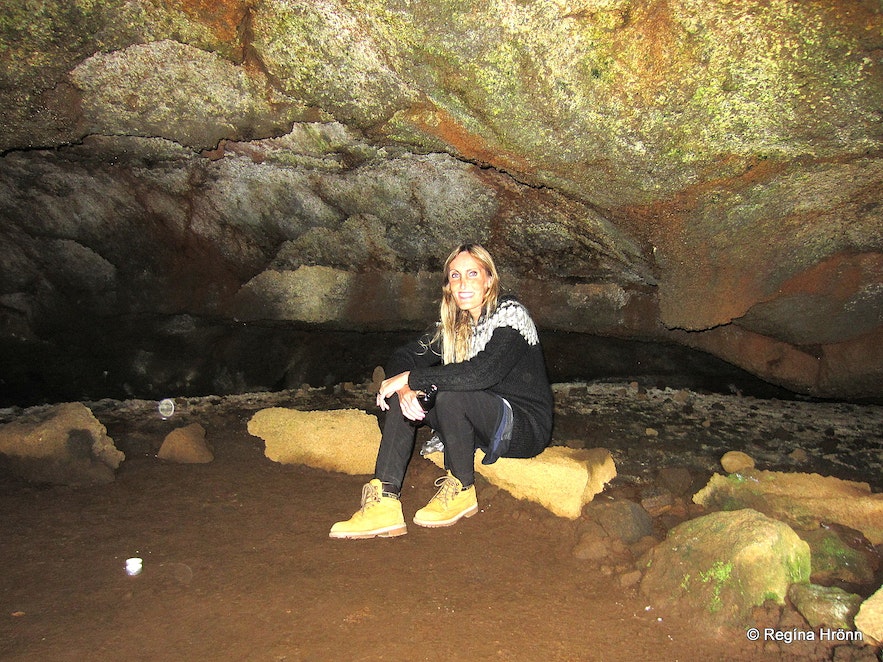 At the exhibition, you can get information on the places in Iceland, where Fjalla-Eyvindur and Halla sought shelter over the years. A very informative exhibition, which I think that too few people know about. It is located on the second floor of a restaurant in Blönduós. 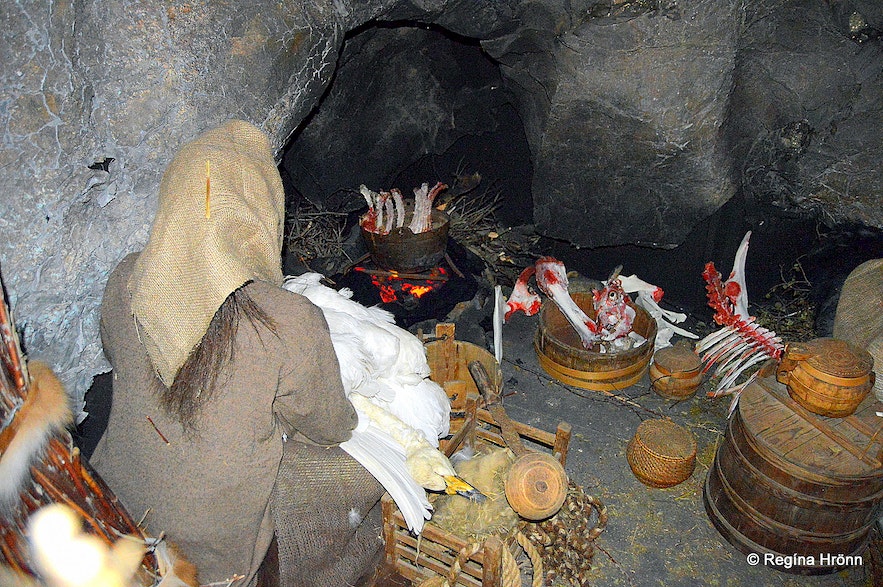 The next stop on our hike was at Eyvindarrétt, which is a big, natural lava mound rising up from the ground. This lava mound is the biggest of its kind in this area.

There is a rift through the full length of Eyvindarrétt with grass in the middle of it. The rift is some 2 meters wide and it is possible to walk through it. Inside there is stowage in several places. This sheep pen was used by Fjalla-Eyvindur.

A wicker basket was found here at Hveravellir, which is believed to have been made by Fjalla-Eyvindur and shows him as a master craftsman.

A monument was erected for Fjalla-Eyvindur and Halla at Hveravellir in 1998. It is called Fangar frelsisins - Prisoners of Freedom, and the inscription reads: "In memory of Eyvindur Jónsson b. 1714 and Halla Jónsdóttir b. 1710? outlaws in the wilderness for many years. Here nearby was one of their dwellings".

A descendant of Fjalla-Eyvindur unveiled the monument and it was consecrated by one of our ministers. It is lovely, but a sad monument, 2 stone hearts behind steel bars. I think it leaves no man untouched thinking about the destiny of these 2 unfortunate people, who were destined to live in the wilderness of Iceland. 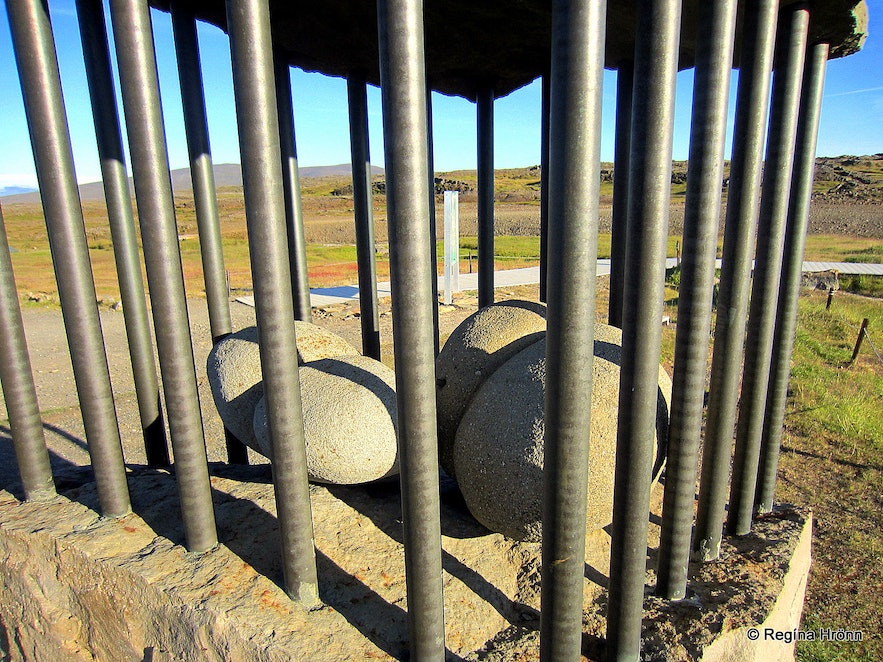 To reach Hveravellir one has to continue driving on road no 35, Kjalvegur road, and pass Iceland's most famous waterfall, Gullfoss in the south of Iceland. This road will then take you for some 168 km across Iceland to Blöndudalur in North-Iceland, where you will then merge with ring-road 1.

It is a shorter route to the north on an unpaved road through some rugged landscape - an alternative to driving on the paved ring-road 1. 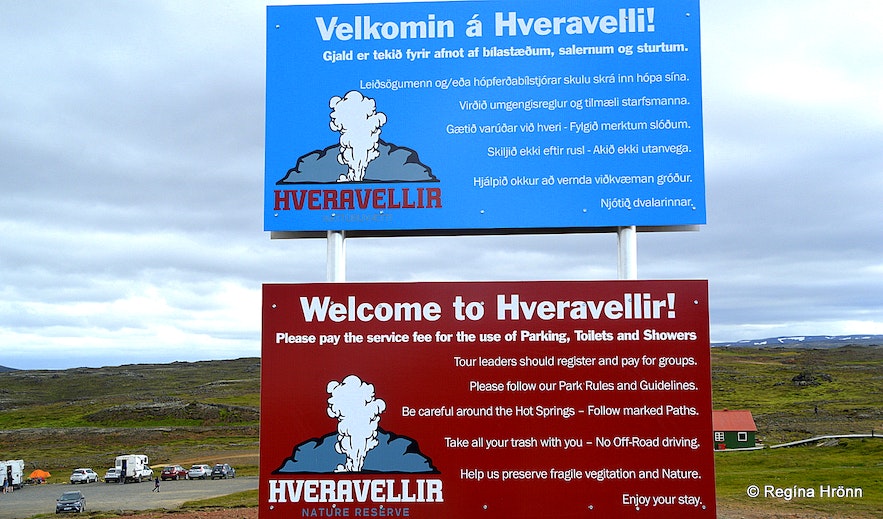 This road is a highland road and it is a very bumpy gravel road so a 4x4 is preferred, but it can be driven in a 2WD, but not the smallest of cars, as after rain the potholes are very big.

You can find a selection of car rentals here, to find a car that might suit you the best for this journey into the Highland of Iceland. This area can only be accessed in the summertime.

Halfway through, or some 90 km away from Gullfoss waterfall, you will encounter Hveravellir, which makes driving through this rugged landscape so worthwhile.

The sign above you will see at the intersection of Kjalvegur - Kjölur Route and the road leading to Hveravellir. You can see on the sign that you can spend the night at Hveravellir, get some basic groceries and coffee, take a dip in the geothermal river and have a look around the area.

What you can not do, on the other hand, is to fill up on gas. So make sure that you have plenty of gas before entering Kjalvegur - Kjölur Route.

See also: A fascinating Hike through the Geothermal Area of Hveradalir in Mt. Kerlingarfjöll and the Kjölur Route where I write a section about Kjalvegur road and show you the view-dials by that road. 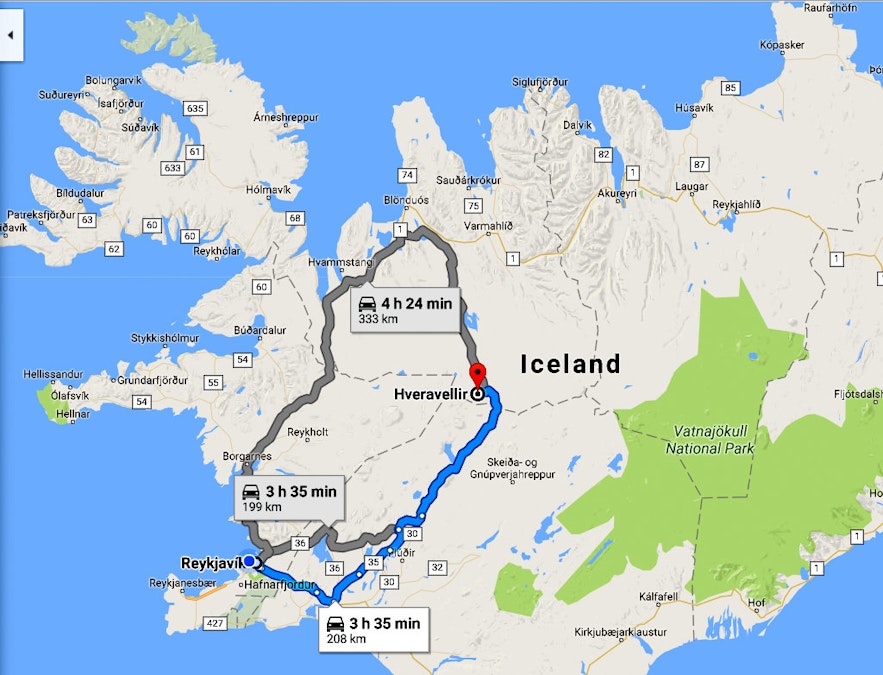 Have a lovely time at Hveravellir :)