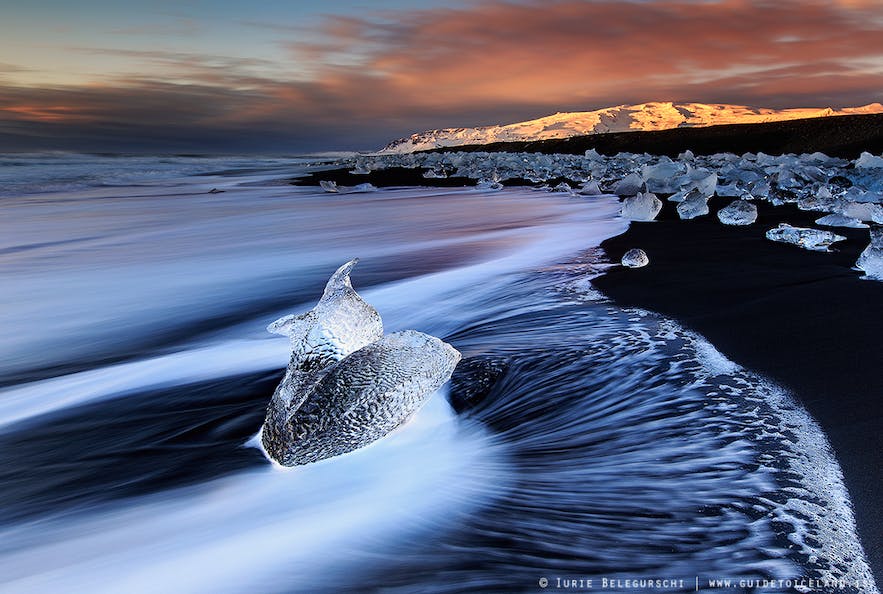 The most popular tour in Iceland is the Golden Circle tour, but did you know that Iceland has got a beach with glistening ice chunks, which sparkle like diamonds? I try to go there every year to check out the "latest" versions of the ice diamonds glistening on the black beach, Breiðamerkursandur. Visiting this beautiful beach is one of my favourite things to do here in Iceland! 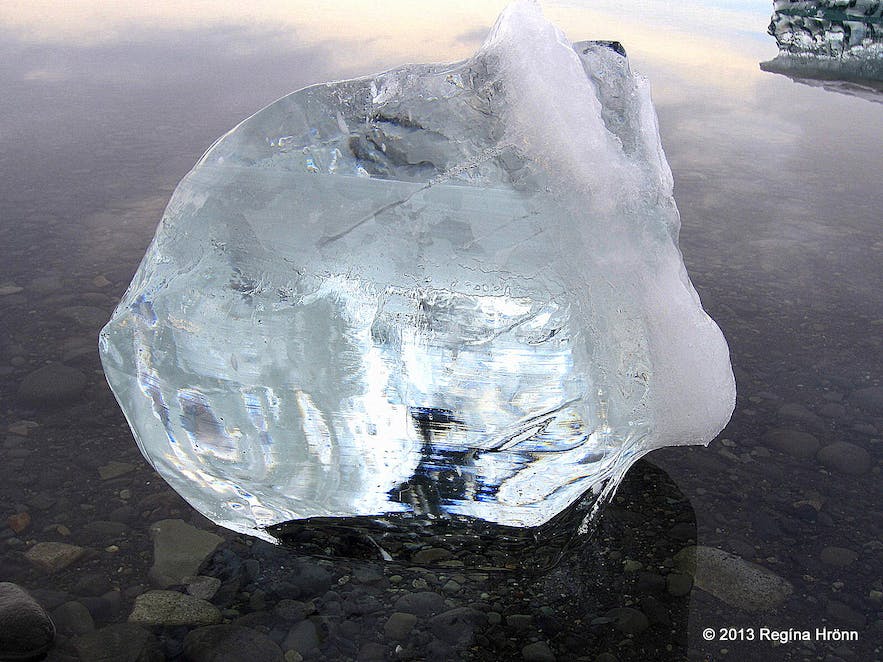 The Breiðamerkursandur ice Diamond beach is by Jökulsárlón glacial lagoon in southeast Iceland, on which I have written another travel-blog.

Jökulsárlón is one of Iceland's greatest wonders of nature, the Crown Jewel of Iceland - and right by Iceland's Ring Road number 1. 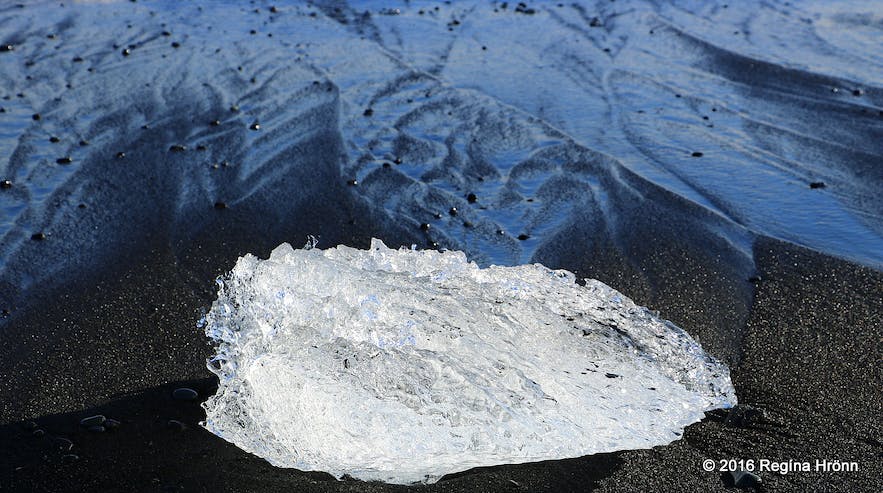 The glacier's name is Breiðamerkurjökull glacier, and huge blocks of ice calve from the glacier and large chunks of iceberg float in the lagoon. 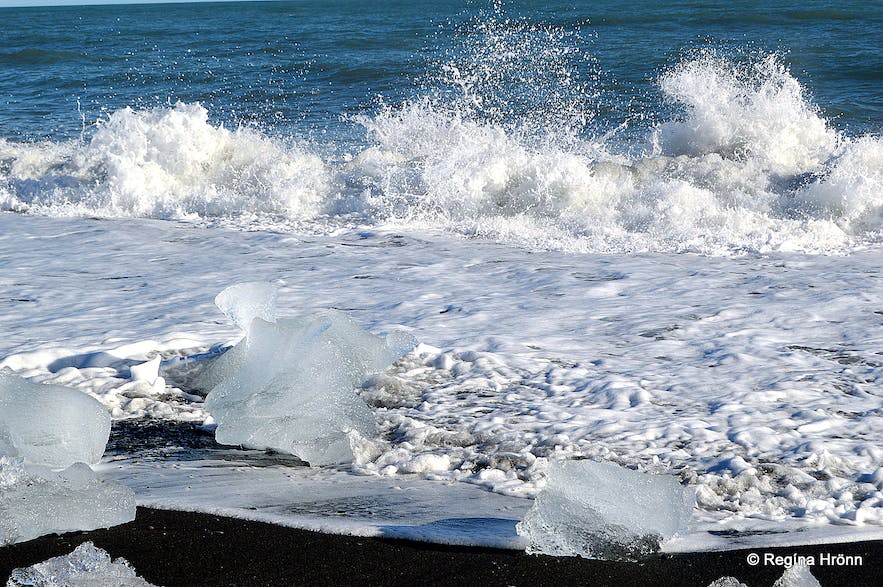 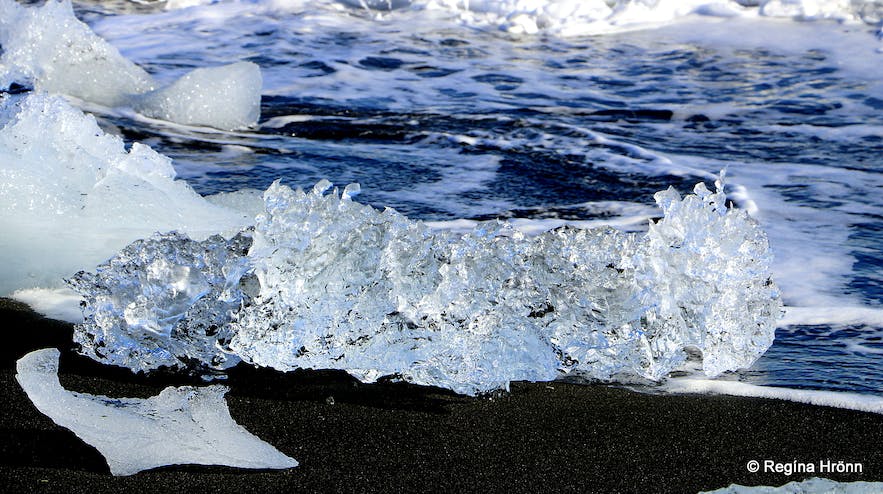 The state-run radio station RÚV called me last year to ask me how this name came about. I am shy so I don't do interviews, but told them to contact the office of Guide to Iceland. My friend Magnús, who was back then the head of the content department of Guide to Iceland, gave them an interview. 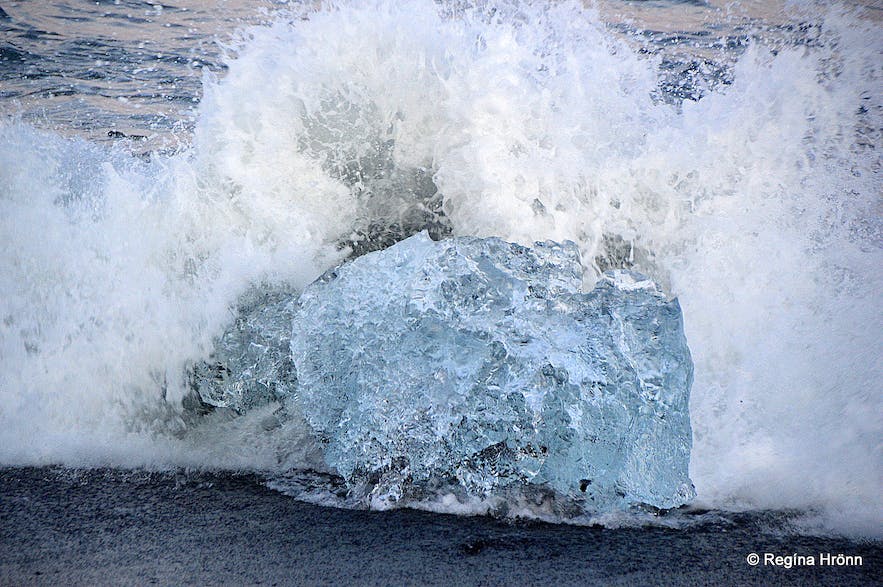 The Jökulsárlón lagoon only appeared around 1935 and has grown to around 18 km2 as the glacier is melting. Here you will find the lowest point below sea-level in Iceland - and the lagoon has become the deepest lake in Iceland with a depth of around 248 meters. 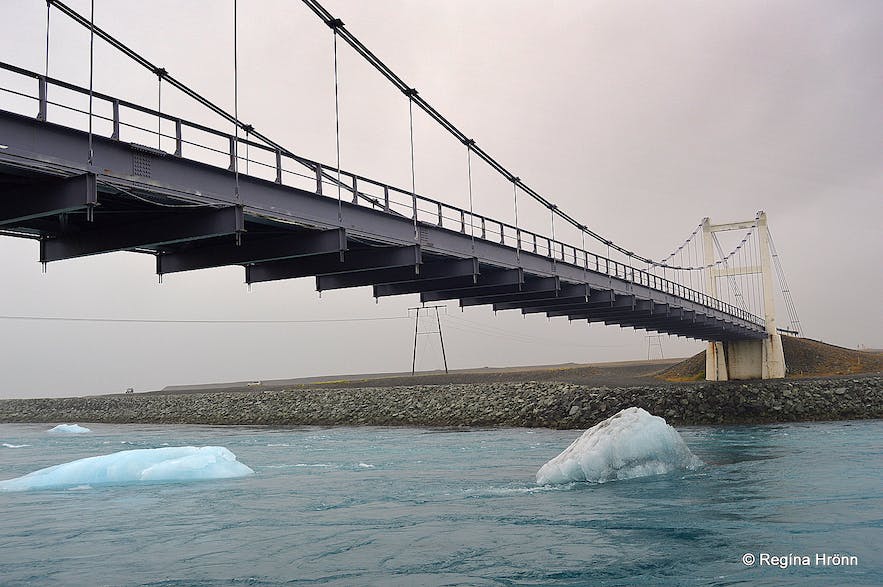 Things that can kill you in Iceland

Many of the icebergs have an astounding bright blue colour and one can follow them from the Jökulsárlón glacial lagoon, where they float under the bridge on ring-road 1 and down to the sea.

Some of the ice-chunks are polished by the sea and wash ashore again. The ice-chunks on Breiðamerkursandur make for outstanding photo opportunities, like the photo below, which belongs to my chilling on an iceberg photo-series ;) It is freezing though leaning up against an iceberg like this, but makes for a good photo.

Always be very careful here and only lean against the icebergs, never crawl up on them. And always watch out for the incoming tide and the waves so you don't get stuck and carried out to sea! It almost happened to a couple of tourists recently: 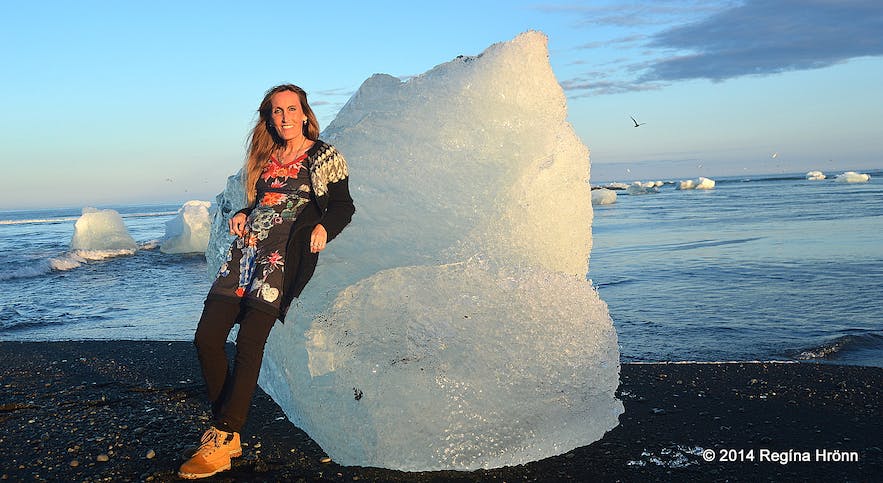 There are smaller ice-chunks to be found all over the black sands, which look like sparkling ice diamonds in all sizes and shapes.

The ice-chunks take on so many forms and colours; ranging from transparent, to white, to the most amazing blue colour, and some of the ice is black; it is truly like visiting an art gallery. And it has always got "new" art, as it were - one never knows what to expect.

Sometimes the black beach is covered with smaller ice diamonds, and sometimes big chunks of white and blue ice cover the beach - with glistening ice diamonds in between the bigger ice-chunks. 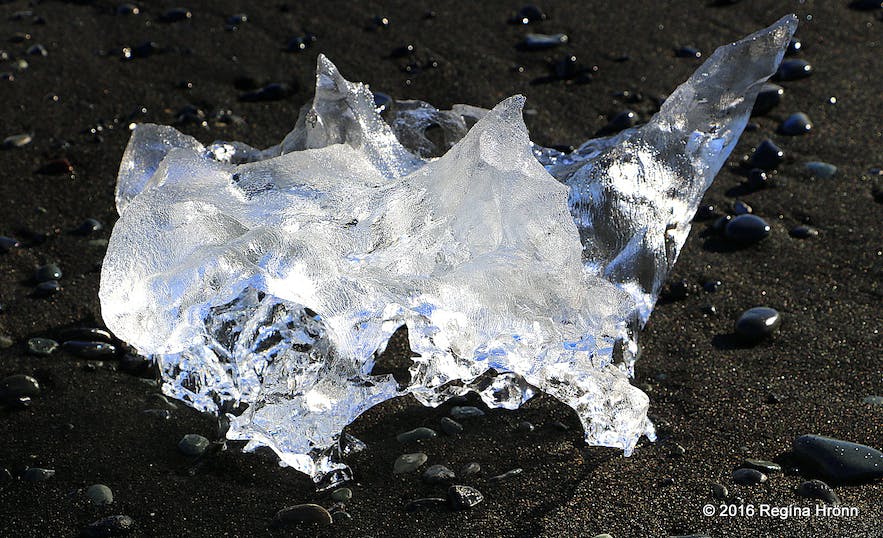 I have been here in January, June, July, August, September, and November and have always been blown away by the beauty of the polished ice chunks on Breiðamerkursandur beach. It is of course at its most beautiful when the sun is shining, but once during my visit, it was raining cats and dogs, and I was soaking wet, but it was still a lovely visit.

When my travel-blog got posted on the Guide to Iceland Facebook website a woman commented on my post and told me that she had got engaged on the diamond beach, so she actually got a real diamond ring on this beautiful beach! Very romantic :) 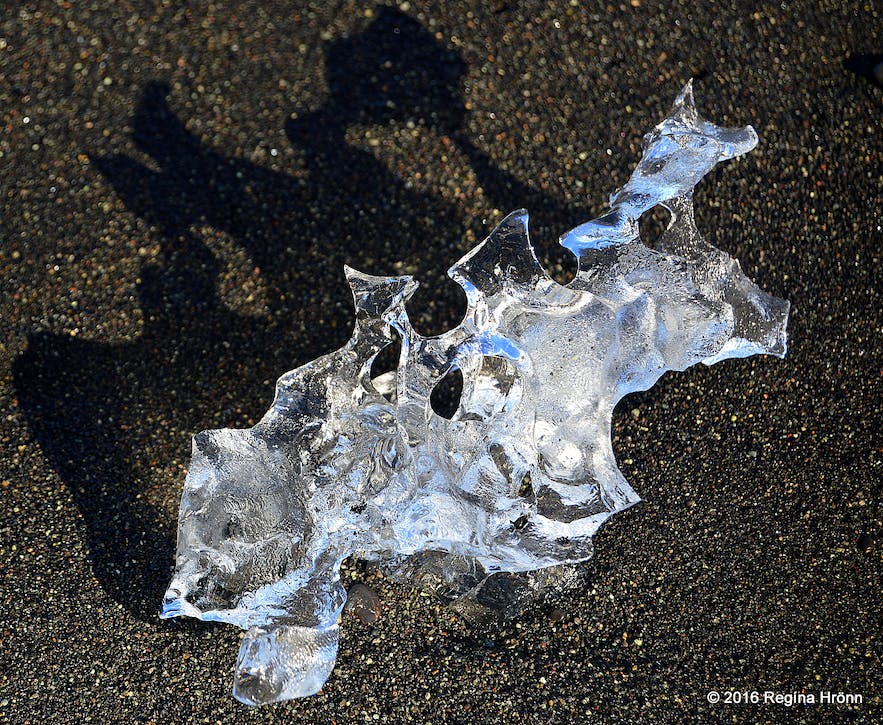 Breiðamerkursandur beach was covered in large blue and white ice-chunks taking on all forms. And the ice diamonds were glistening in between the ice chunks.

There is a parking lot on the south side of ring-road 1, just above the beach and only a couple of minutes walk down to the sea. So it is very accessible. But let's remember that we are right by the cold Atlantic ocean, so let's be very cautious here.

The south coast of Iceland has got so many beautiful attractions that even if you visit in the summertime when there is almost unlimited daylight, then you should consider staying over for one night. Then you will get to see the ice diamonds in a different light. 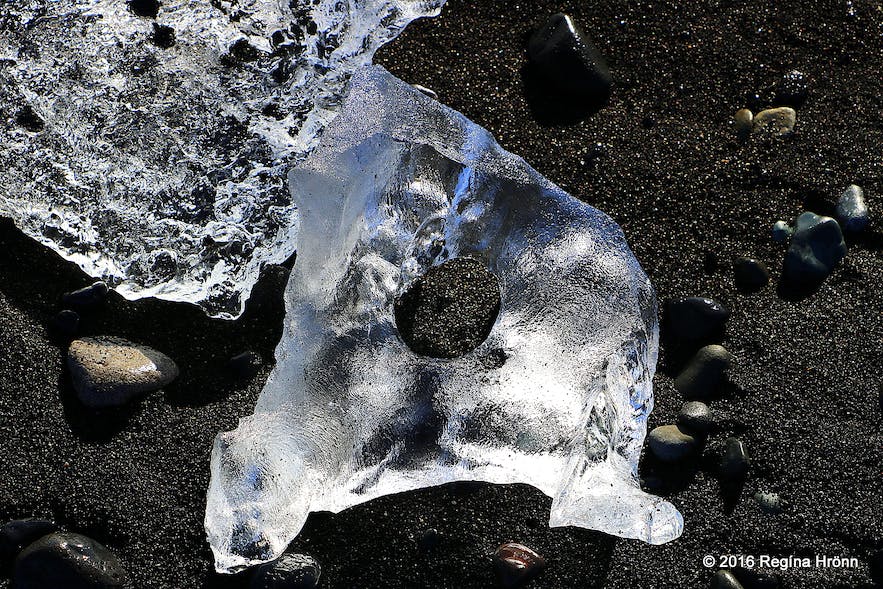 If you want to visit the Breiðamerkursandur-Fellsfjara beach then check out the following guided and self-drive tours: 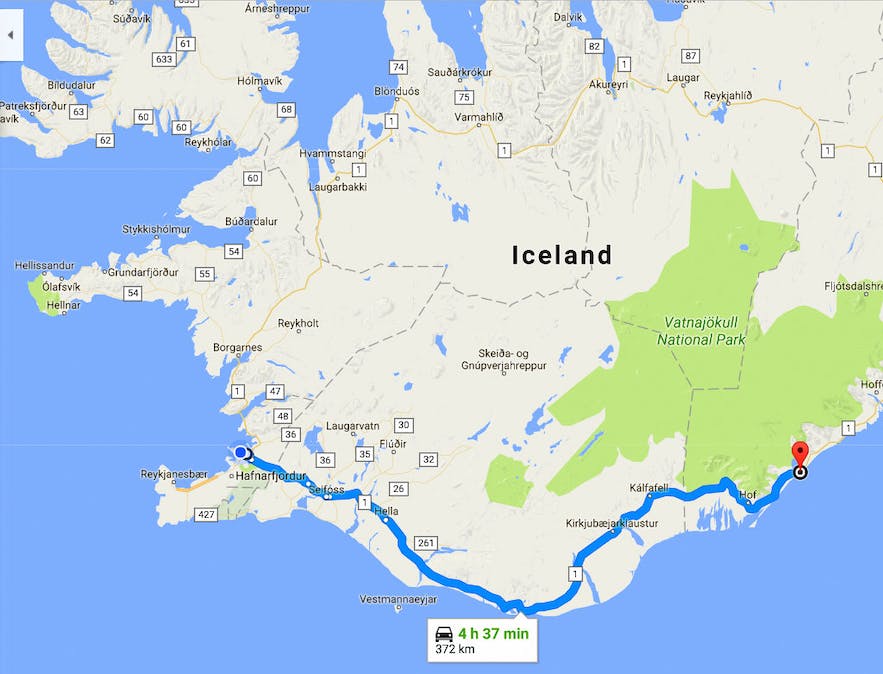 I have joined a guided tour to Jökulsárlón glacial lagoon and written another travel-blog on my experience of that tour. And if you want to see what a winter visit to the glacial lagoon and the Breiðamerkursandur beach might look like, then I recently wrote a travel-blog about my winter visit to Jökulsárlón and Breiðamerkursandur beach:

This beautiful beach is located in southeast Iceland some 377 km away from Reykjavík. You can go there on a day trip in the summertime only, but in the winter time there is limited daylight, so it is best to find a place to stay close by, so you can enjoy this natural phenomenon in daylight.

Read Nanna's article on the Ultimate guide to driving in Iceland before you rent a car for your Iceland visit.

Also check out the nearby  Fjallsárlón glacial lagoon, on which you can also join a boat-tour and sail amongst the icebergs. High up on my list is to join a boat-tour on this serene lagoon and I will hopefully do so soon.

I am sure that you will enjoy visiting the beautiful Breiðamerkursandur-Fellsfjara beach as much as I do - have a lovely time, but let's always be careful here.