Laugarvatnshellir Cave and the Cave People of Iceland

In this travel-blog I want to tell you about Laugarvatnshellir - the Cave of Laugarvatn. It is quite a remarkable cave, as two families lived in it in the last century, and two children were even born in this cave.

Laugarvatnshellir is one of the very few caves in Iceland in which people actually lived. It was normal for outlaws to live in caves, but not for the common Icelander. 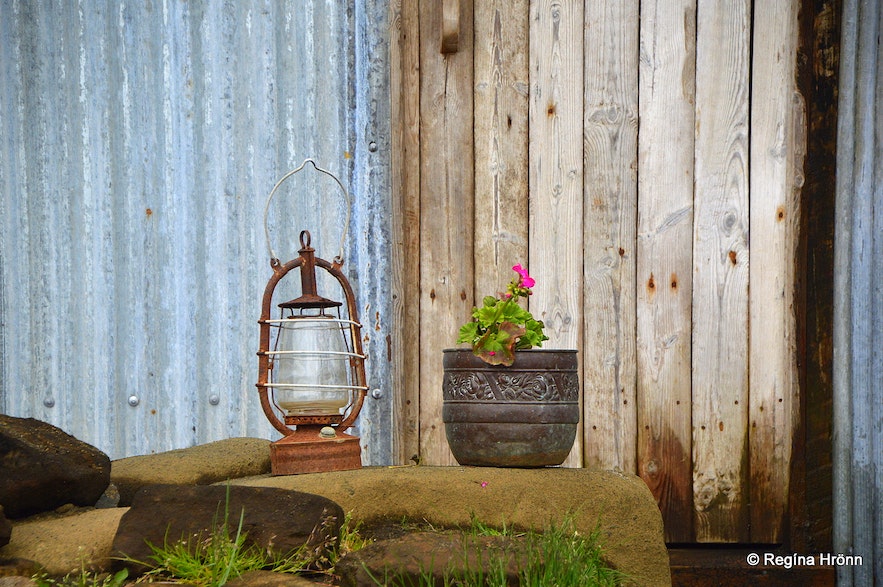 A young couple, Indriði Guðmundsson and Guðrún Kolbeinsdóttir (17), decided to take up residence in the cave in 1910, living there for 11 months. Indriði was raised in Laugardalur in the vicinity of the cave and found these old man-made caves to be a beautiful and peaceful setting for a home.

This cave was not considered to be any less of a home than some of the houses Icelanders were already living in, but back then, many Icelanders were still living in the traditional turf houses.

See also: A List of the beautiful Icelandic Turf Houses, which I have visited on my Travels in Iceland 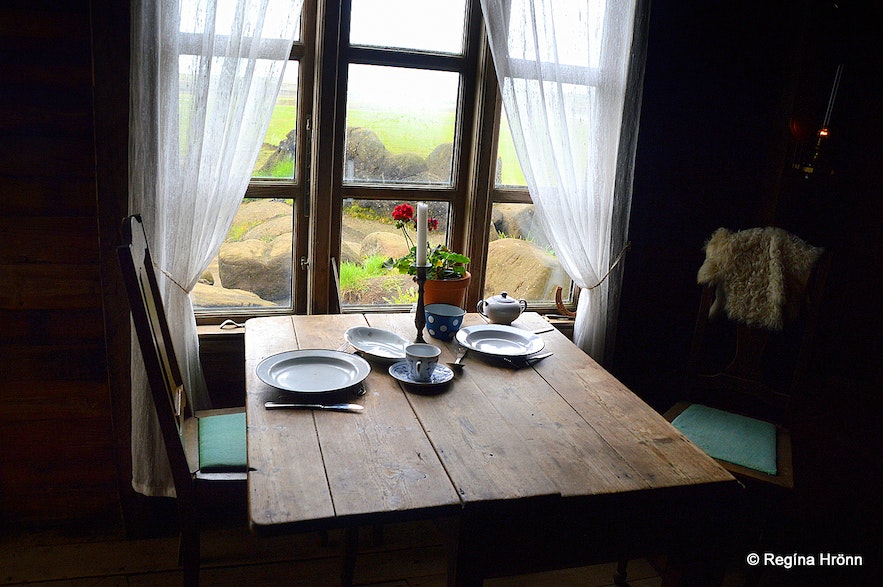 Indriði was a carpenter and he started the process by digging out manure and rocks from the two caves. He then installed a living room and a kitchen in the bigger cave, while the couple kept sheep in the smaller cave. They also had a cow and some horses.

The young lovers planted a potato garden east of the caves, while Indriði shot ptarmigans and sold them in Reykjavík. 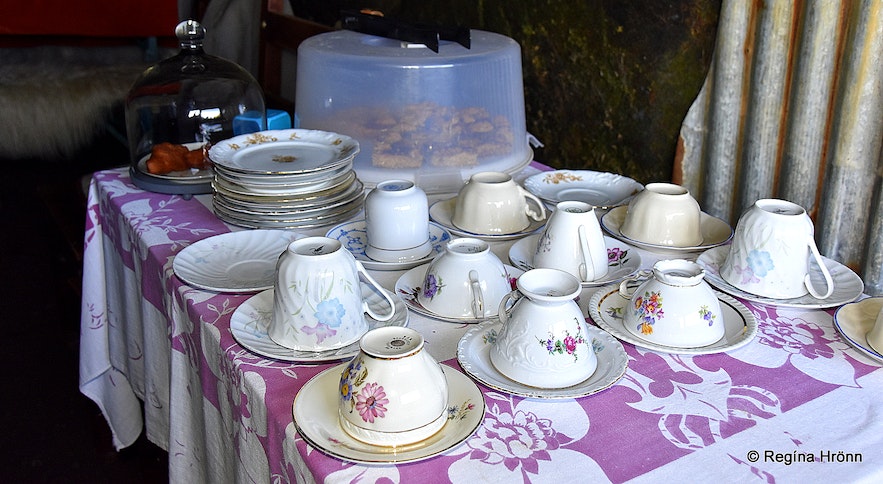 You can get coffee and cakes in the cave

When summer arrived, they invested in a big tent, which had been used during the visit of the Danish King Frederik VIII in 1907, and put it on the lawn in front.

In the tent, they sold coffee, bread, and cakes, which Guðrún made herself, to the passers-by. 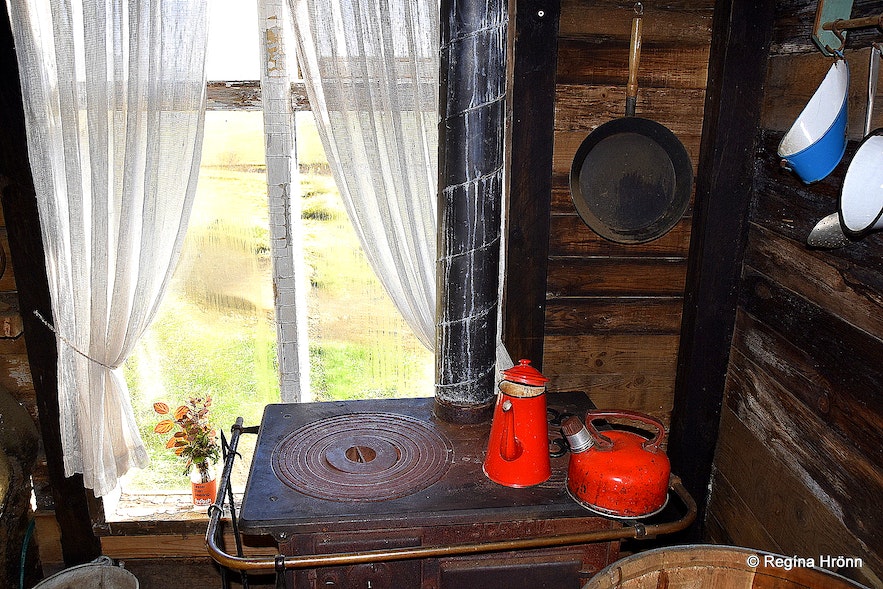 Another couple, Jón Þorvarðarson and Vigdís Helgadóttir, moved into the caves and lived there from 1918-1922. Jón was also a carpenter, so he closed the cave opening and installed a room with new panelling, putting in a stove.

The couple had three children during the time they lived there. Two of their children were born in the cave, with Jón delivering the first child, Ragnheiður (1919), while a blizzard was roaring outside. 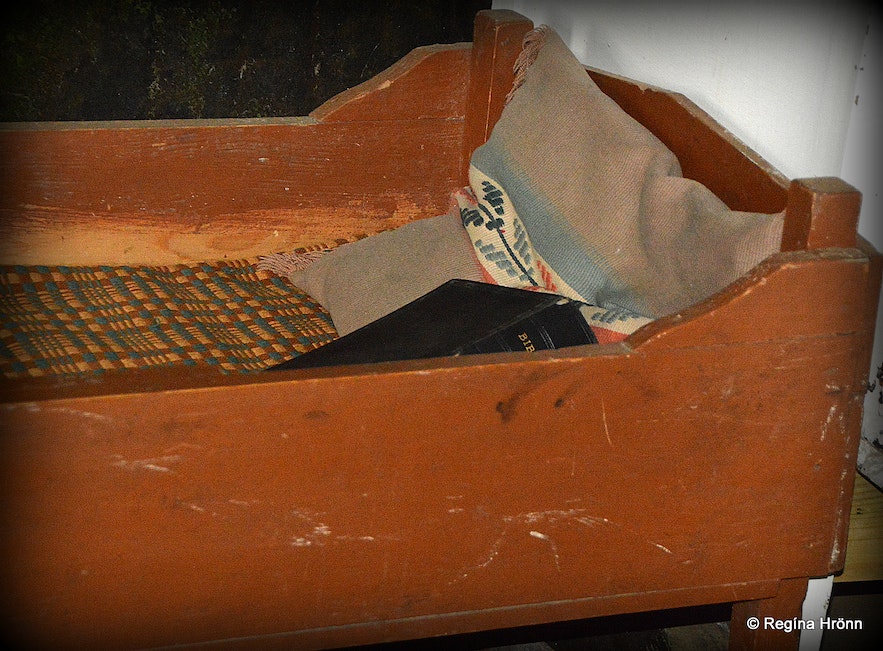 Shortly after Ragnheiður was born, a supposed elf-lady appeared in Vigdís's dreams and told her that she should not be afraid to do the laundry in the Vallalækur Brook. She only had to leave a Bible on top of Ragnheiður's crib and the elf-lady would look after her.

When Vigdís returned after having stepped out, she always felt as if there were a presence sitting by the crib; that must have been the elf-lady. Later on, Ragnheiður would be known to play with the elves. 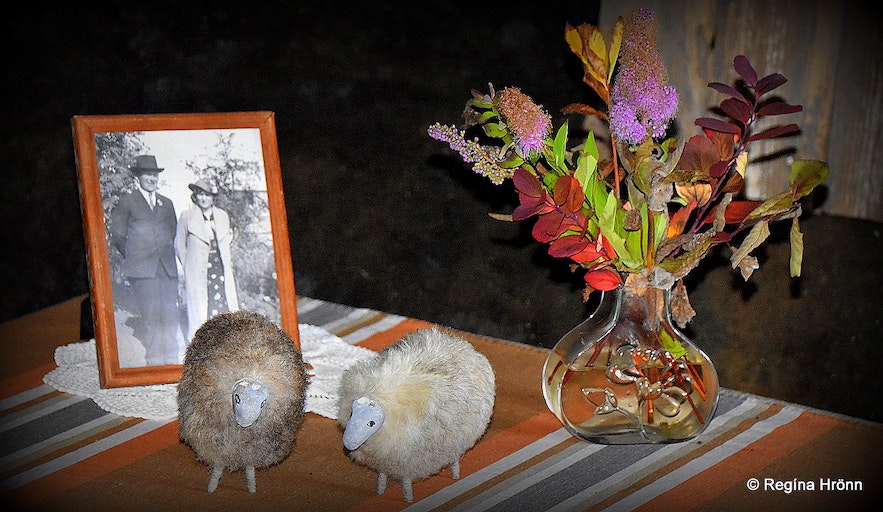 This was not uncommon in Iceland in the previous centuries; to see elves, and to play with them. My grandmother told me about her elf-friends and so did her sister, when they were growing up in the Westfjords of Iceland.

The couple lived in the caves with their 3 children for 4 years and were once visited by the Danish King Christian X, who visited Iceland in 1921, and the King was treated to "skyr með rjóma" - Icelandic skyr with cream in the cave :) 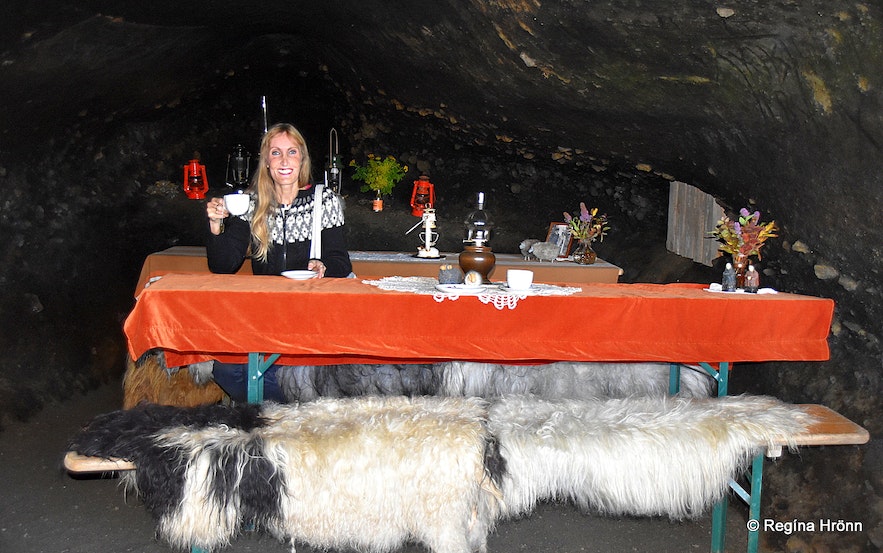 Drinking coffee inside the new café in the cave

One more thing about the caves; they were believed to be haunted, or maybe it is true that elves live there? Want to hear why?

The farmers had used the caves as stalls for their sheep throughout the centuries and could fit some 3-400 sheep in there. Þorsteinn, who was a new shepherd, went to the caves with the sheep, but the sheep refused to enter.

He tried to light a candle, but the light went out again and again. He got very angry and entered the caves and banged the walls with a cane. The sheep then finally entered and Þorsteinn went to sleep in the furthest end of the caves. 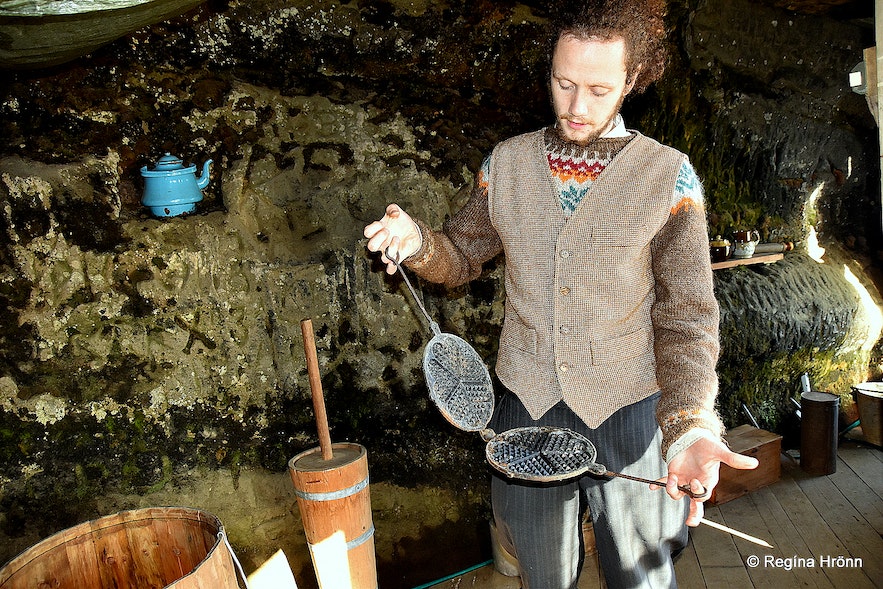 He was abruptly woken and got dragged by the feet all around the caves! This happened repeatedly until he finally gave up and took the sheep back to Laugarvatn and said that he would never sleep in the caves again!

As soon as Þorsteinn arrived at Laugarvatn, a roaring blizzard broke out, which lasted for many days. If Þorsteinn had stayed in the caves he would have starved to death.

That is why we think that the caves are inhabited by elves and not ghosts, as Þorsteinn's life was saved. Afterward, the shepherds stopped using the caves as a shelter for their sheep. 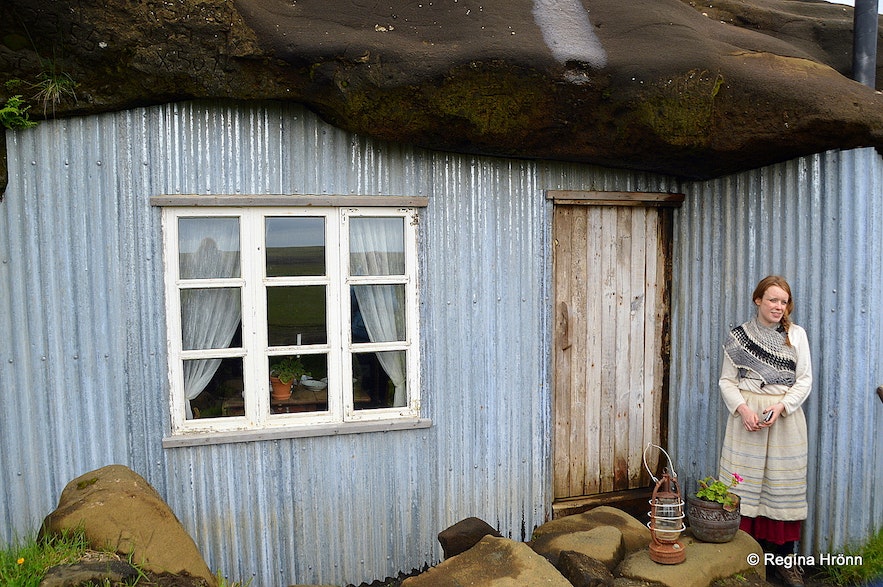 Laugarvatnshellir cave and the guide

You will notice that the cave is made out of soft sandstone tuff, with heaps of names and dates written on it.

Some of them might be quite old, as we have no idea who dug out these caves initially, it might even have been the Irish monks, who were here before the Viking Settlement of Iceland. 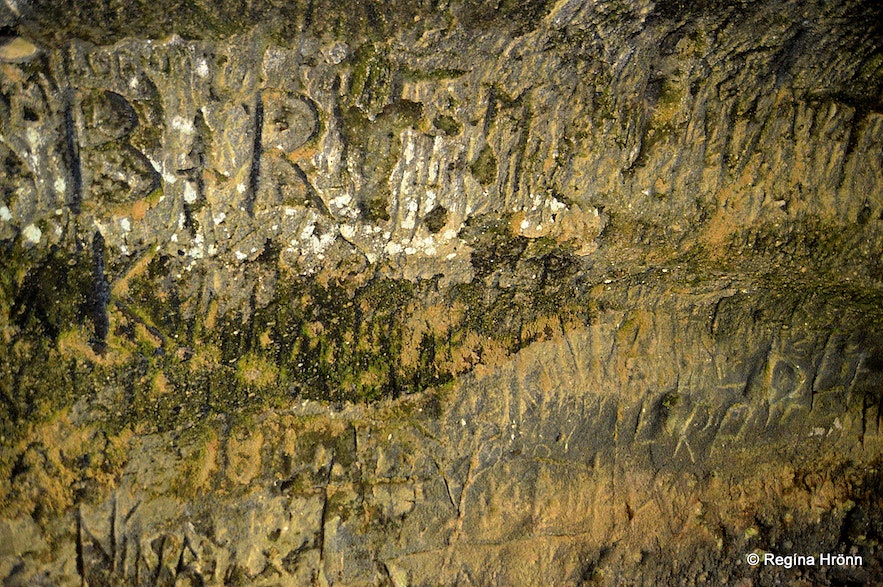 Old engravings in the cave

A newly paved road takes you across Lyngdalsheiði Heath from Þingvellir to Laugarvatn, and the detour to the cave is only a couple of minute's drive. The old road, which we used to call the washboard as it was so bumpy, runs by the cave.

We locals used to visit the cave often while we were passing by on this road. 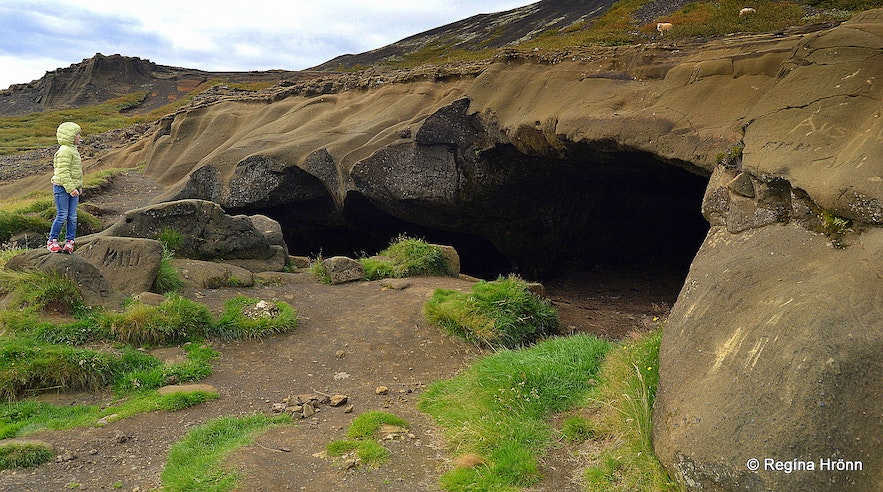 Here is also a part of another road, called Konungsvegurinn or the King's Road, which was built in 1907 across Lyngdalsheiði Heath close to the Laugarvatnshellir Cave, and all the way to Geysir geothermal area and Gullfoss waterfall. That road was built for the upcoming visit of the Danish King Frederik VIII, who was also the ruler of Iceland back then.

This was a road for carriages, as we Icelanders thought that the king would be travelling in a carriage, and spent an outrageous amount of money on this road, making it the most expensive project in Iceland back then, or until Kárahnjúkavirkjun Dam was constructed, as nothing was too good for our king. The king, however, preferred travelling on horseback while in Iceland. 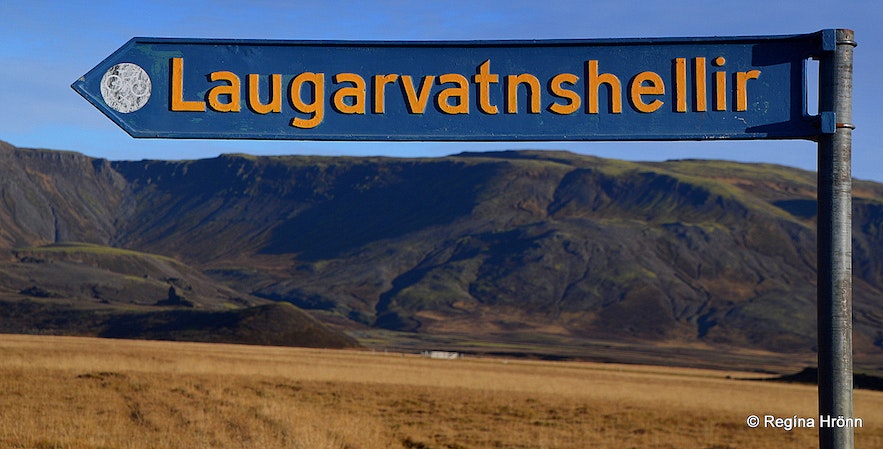 I have often visited the cave through the years and taken my foreign guests here. I had often wished for some activity to take place here, something to keep the memory of the time when it was the home of two Icelandic families alive.

I am so happy that the cave was restored and that it has become alive again like it used to be some 100 years ago :)

Laugarvatnshellir Cave was restored and opened up to the public in the summer of 2017. And now you will be able to visit the Cave People of Iceland and see how they lived not so long ago. 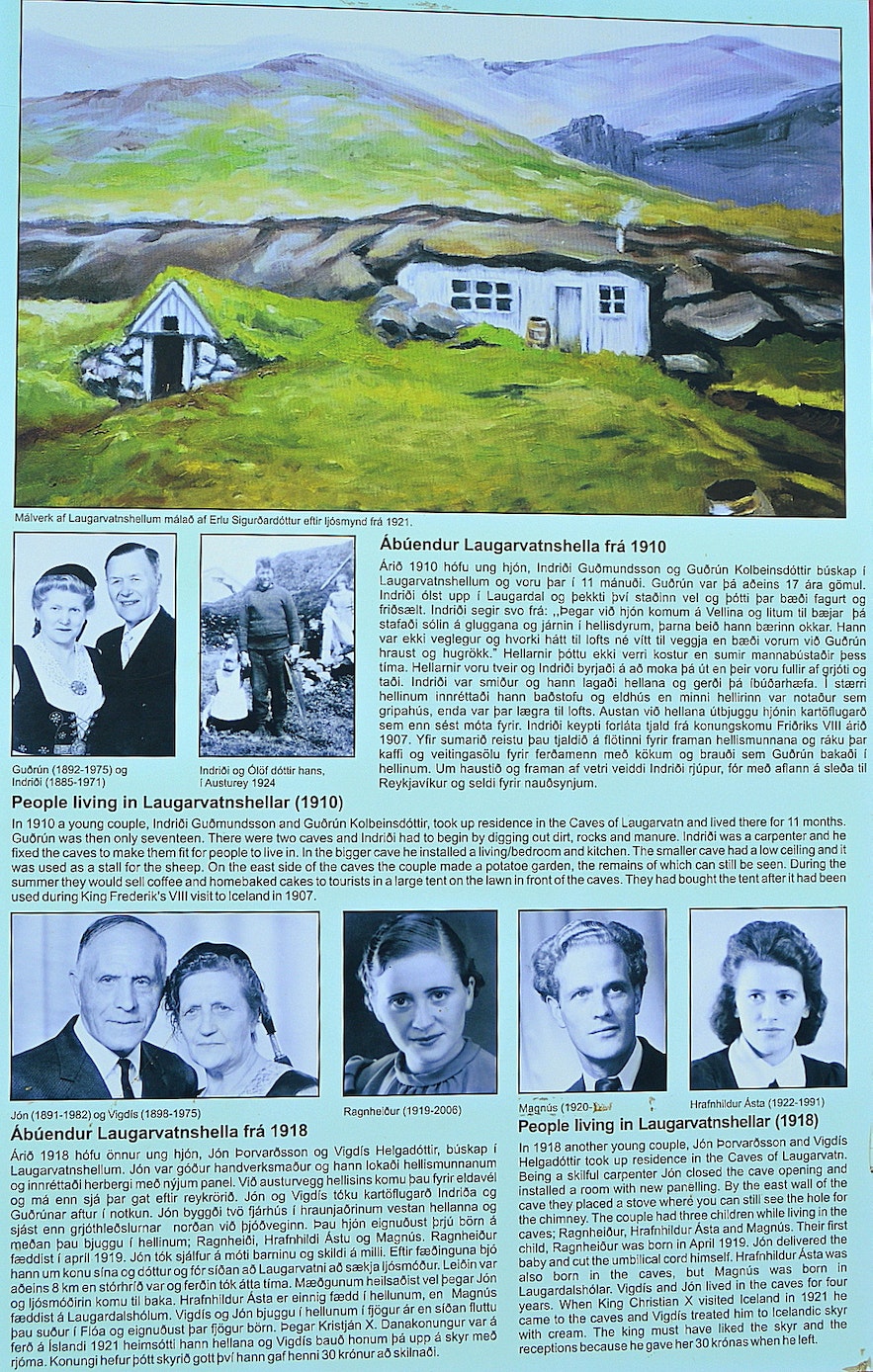 Laugarvatn Adventure in cooperation with Minjastofnun - the Cultural Heritage Agency of Iceland has endeavored to make the cave very similar to what it used to be like during the time it was inhabited by these two families.

The Icelandic Road Administration and the Youth Association of Laugdælir put up a very good information sign, with photos of the people who used to live in the cave.

On that information sign, you will also see a photo of the Elf-church Álfakirkja at Laugarvatnsvellir plains, 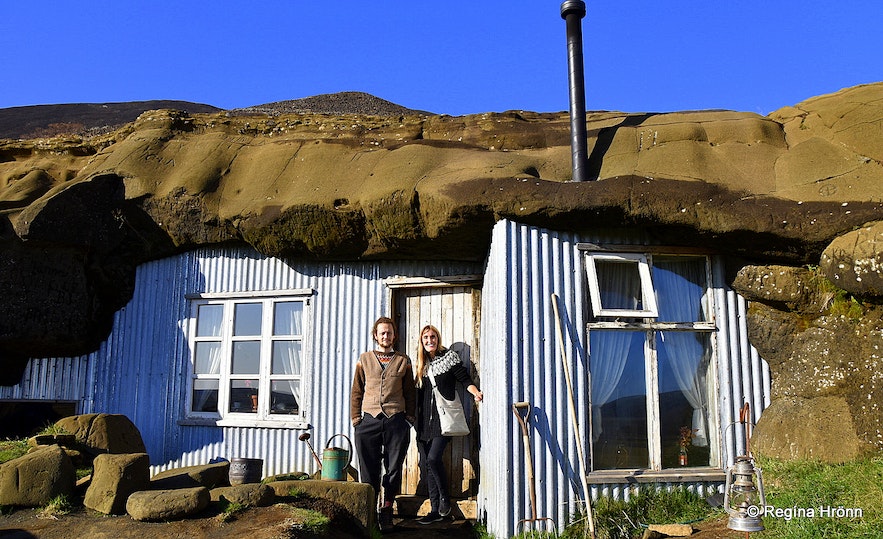 With the guide in front of Laugarvatnshellir cave

There are guided tours into the cave every half an hour from 11:00-17:00 all year round. And the new café in the cave is open at the same time. The guided tour of the cave lasts 25 minutes and the guide will tell you about the lives and living conditions of the cave people. It is a really interesting tour, which I recommend

I have been asked on several occasions if I guide in the cave, but I am a travel-blogger writing about interesting locations and things to do in Iceland and have by now written some 270 travel-blogs.

To get in contact with the guides I refer to the link I have added above or phone them at (+354)888-1922. You can also visit the website of the Cave People for more information. The Cave People also guide tours into various caves in this area. 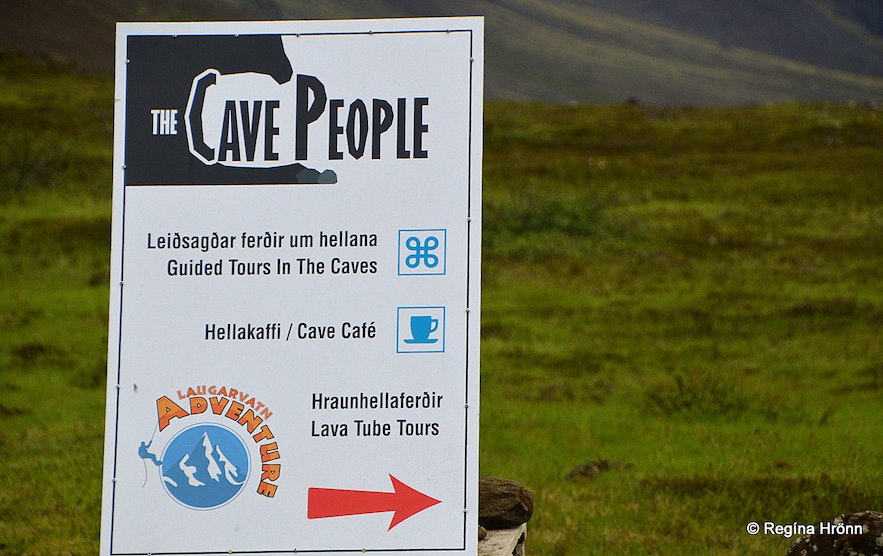 I recently wrote a travel-blog about the majestic Gullfoss waterfall:

The Majestic Gullfoss - Iceland's Golden Waterfall, which gives Name to the Golden Circle

Have a lovely time visiting the Cave People :) And you might want to read up on more caves in Iceland in my travel-blog about my favourite caves.

Also if you want to take a short hike from Laugarvatnshellir to visit an elf-church then have a look at my travel-blog about The Elf-church Álfakirkja at Laugarvatnsvellir plains.