All Icelanders in the olden days used to live in turf houses and the churches were made of turf. There is only a handful of these turf churches left in Iceland today.

One of them is the cute little turf church at Núpsstaður in Fljótshverfi in South-Iceland, called Núpsstaðakirkja church. This turf church is now closed to the public for its preservation. 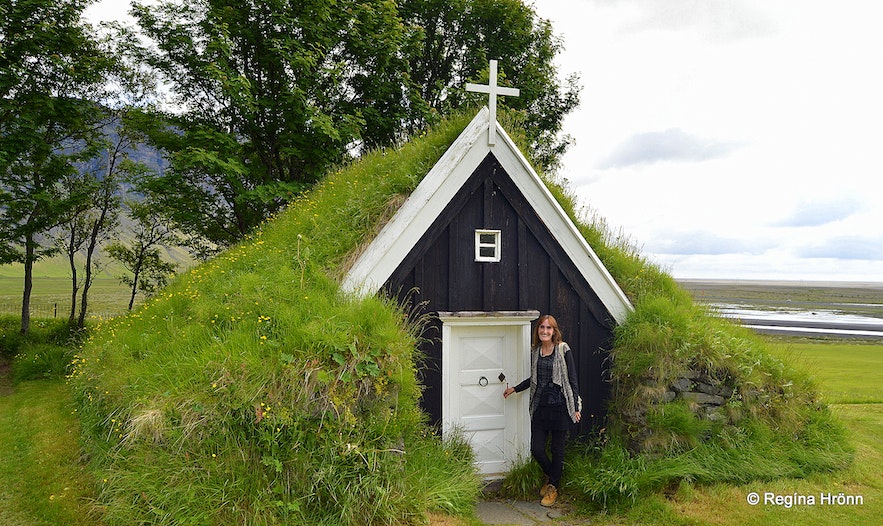 One of my visits to the church some years ago

I am a huge fan of these turf churches and the turf houses remaining in Iceland and am so glad that some of them were preserved as historical monuments.

All of the old turf churches and most of the turf houses in Iceland belong to Þjóðminjasafn Íslands - the National Museum of Iceland, which maintains them. Núpsstaðakirkja belongs to the National Museum's Historic Building Collection. 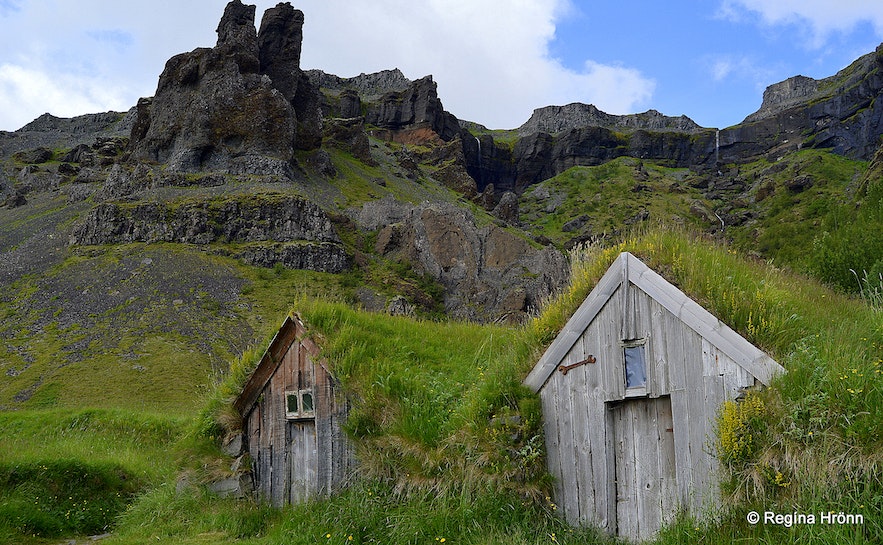 There are dilapidated turf outhouses at Núpsstaður which dates back to the 18th and 19th centuries, and this beautiful little turf church.

The little turf church is in very good condition. It was built no later than 1657 and the oldest part of the church is from the 17th century. The first church on this site was most likely built before the year 1200. 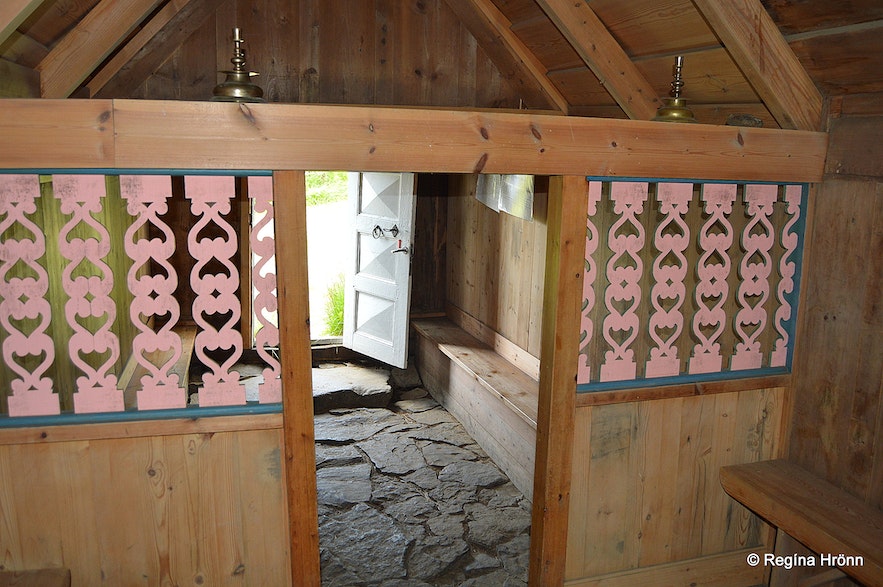 Inside the turf church, from back when it was still open

Núpsstaðakirkja was deconsecrated in 1765 by a letter from the King and was most likely used as a farm church or an oratory after that time. For a while, it was used as a storehouse.

​In 1930 this little turf church became the first building in Iceland to come under the care of the National Museum of Iceland and to be declared as protected. 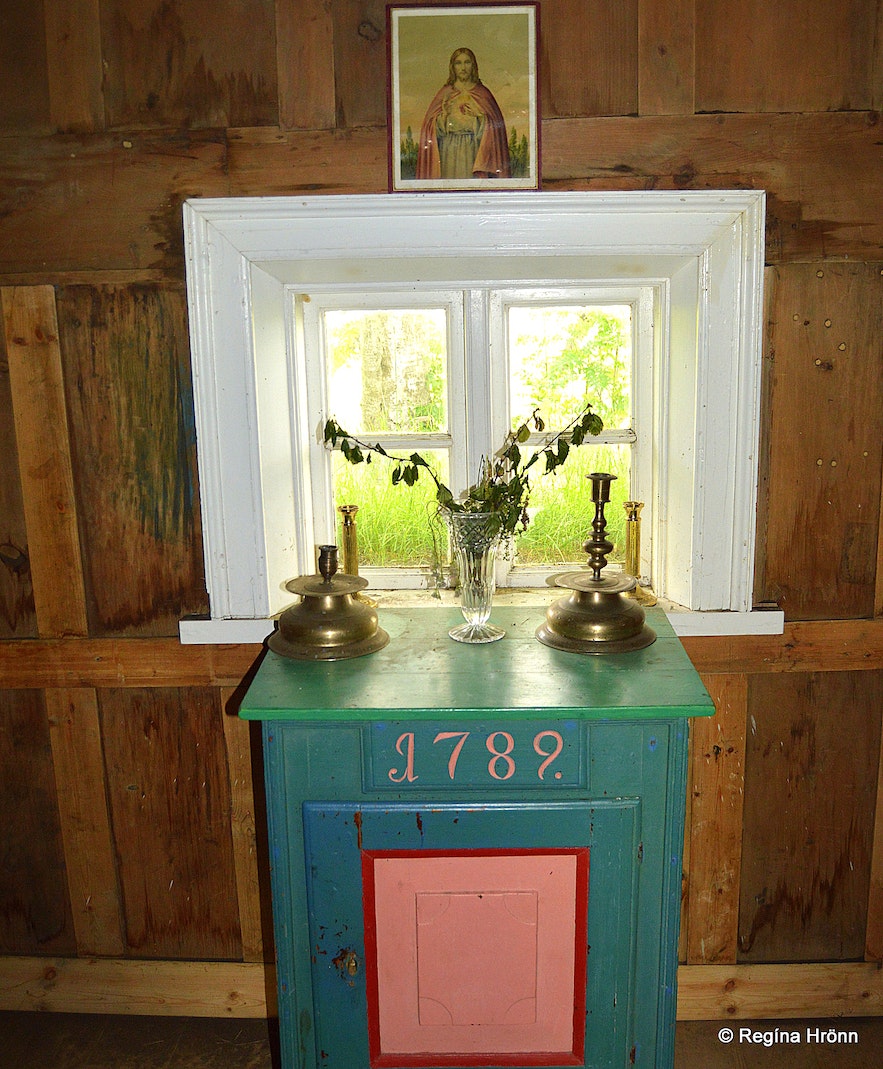 The altar in Núpsstaðakirkja turf church

The National Museum of Iceland put a small altar inside Núpskirkja church, which dates back to 1789 and belonged to the church Stóra-Dalskirkja.

This delicate little church cannot be visited anymore, but the photos in my travel-blog are from a couple of years ago when I visited the church.

Núpsstaður turf farm consists of 15 houses plus 4 others which are in ruins. They are outhouses; a cowshed, barns, a stithy, and a storehouse. The backdrop of the turf farm is so beautiful, these tall majestic mountains which take on all kinds of form and majestic pillars of rock. 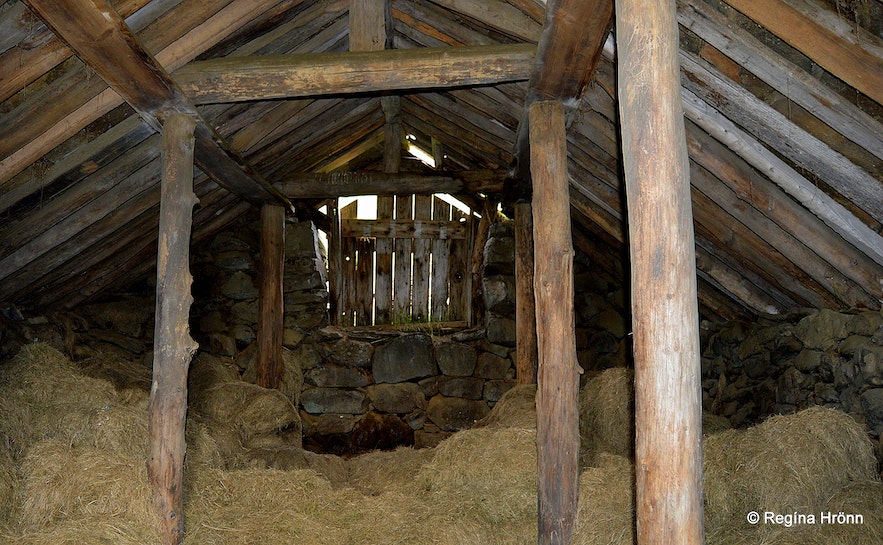 Inside one of the turf outhouses at Núpsstaður

Before ring-road 1 was opened in 1974 the farmers at Núpsstaður farm, which is the easternmost farm by Skeiðarársandur, helped travellers cross the ever-changing unbridged rivers of Skeiðarársandur sandplain and glaciers.

Núpsstaður farm has belonged to the same family since 1730. Hannes Jónsson landpóstur (1880-1968), the farmer at Núpsstaður, helped travellers across for more than 50 years.

He also carried mail all the way to Djúpivogur in East-Iceland, which was no small task across rivers and trackless terrain.

His grave is in the graveyard behind the church. 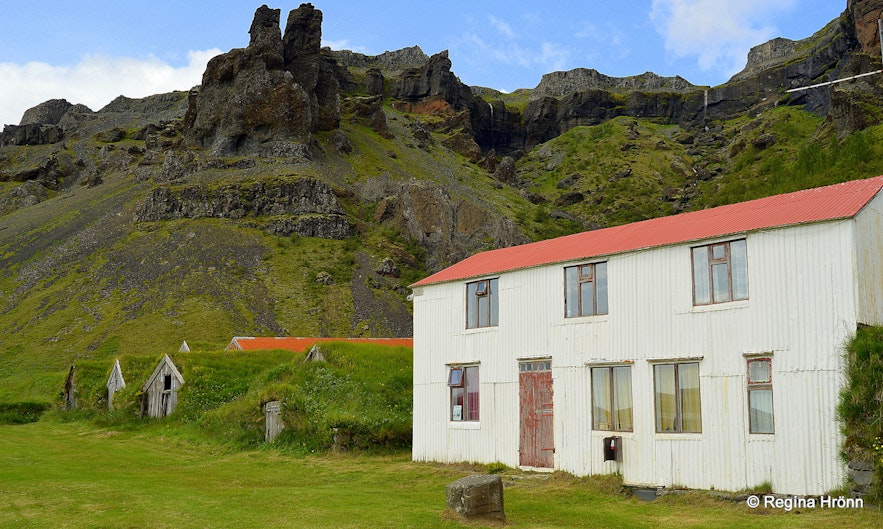 The last inhabitants of Núpsstaður farm were 2 sons of Hannes, Eyjólfur and Filippus, but Hannes and his wife Þóranna had 10 children. All siblings bar the youngest sister were born on the old turf farm. The new farm, see my photo above, was built in 1929.

Since the brothers died, Eyjólfur in 2004 and Filippus in 2010, Núpsstaður farm cannot be visited anymore and it is no longer possible to drive up to the farm as before. 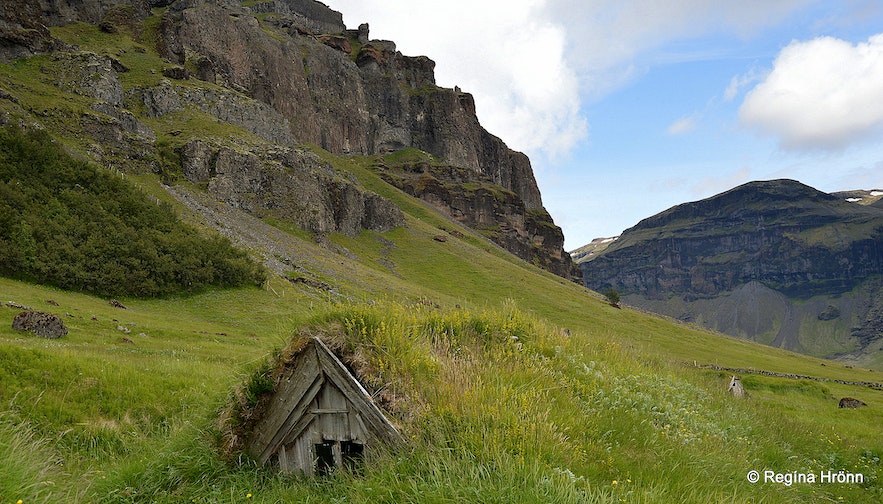 ​A turf outhouse at Núpsstaður

The farm, Núpsstaður farm, gets its name from the mountain east of the farm, Mt. Lómagnúpur. That mountain is one of the most majestic mountains here in Iceland in my opinion; a massive cliff.

Ring-road 1 wasn't opened until 1974 when the rivers on Skeiðarársandur sandplain were bridged. Until then the road didn't reach any further than Mt. Lómagnúpur in South-Iceland. 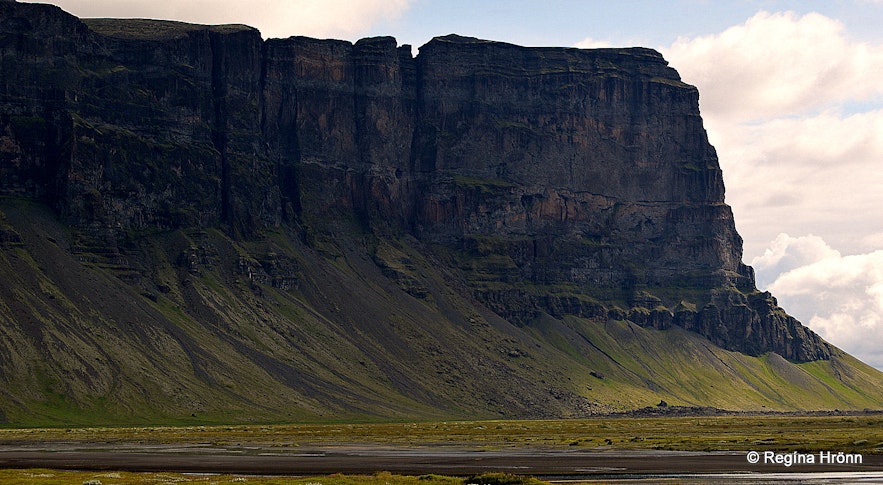 I have always regarded Mt. Lómagnúpur as one of Iceland's most majestic mountains, ever since I saw it first as a little girl travelling in Iceland with my parents. Back then ring-road 1 wasn't open yet and Mt. Lómagnúpur was like a massive guardian of the unbridged black sand plain of the south.

The road stopped close to the mountain and we had to turn back. Since then I have always been a little scared of this mountain, it is so huge and dark. 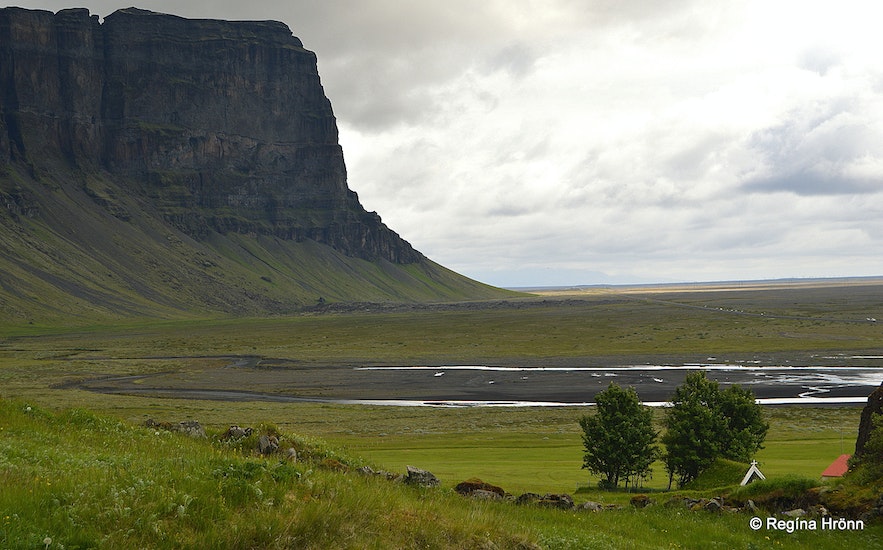 There is an account in the Saga of Njáll connected to the mountain:

The Saga of Njáll speaks of a dream chieftain Flosi Þorgeirsson had. He dreamt that he was by Mt. Lómagnúpur. The mountain opened up and a giant stepped out of the mountain, holding a large iron rod. The giant called out the names of Flosi's men. First, he called out the name of Grímur the Red, a kinsman of Flosi, and Árni Kolsson.

Then he called out the names of Eyjólfur Bölverksson and Ljótur, the son of Hallur at Síða, and another 6 men. 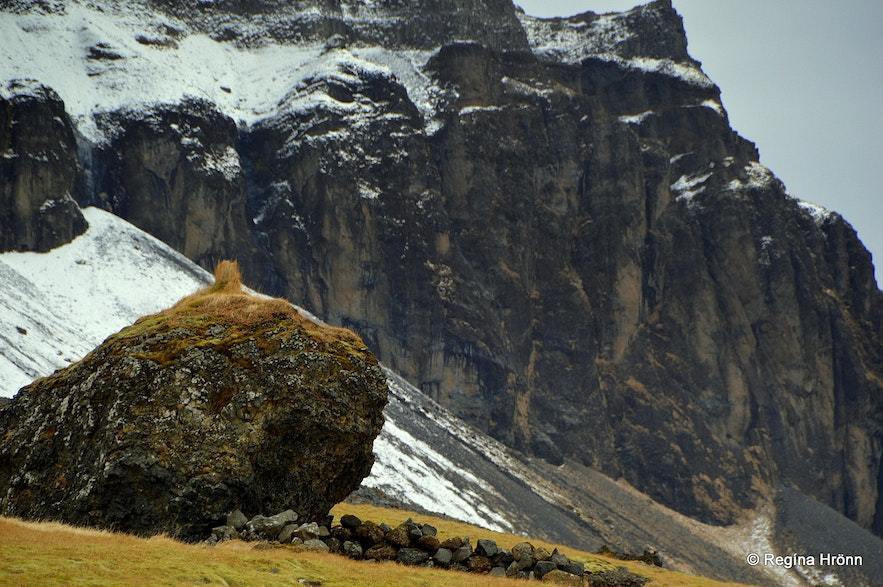 The west side of Mt. Lómagnúpur

The giant then walked towards Flosi and Flosi asked him what was new and what was his name. The giant told Flosi that his name was Járngrímur. Flosi analysed the dream and believed that all these men, whose names were called out by the giant, were going to be killed. 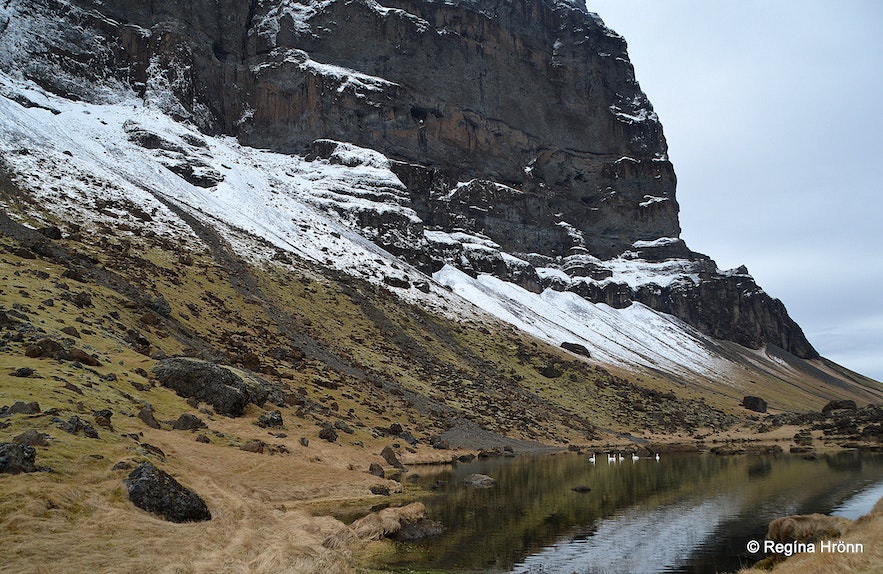 Swans on a little pond on the west side of Mt. Lómagnúpur

If you get a chance (i.e. you see parking somewhere) step out of the car and have a look at Mt. Lómagnúpur while driving on the south coast. It is just mesmerizing and a little scary at the same time.

I once drove onto a path on the west side of the mountain to check out a big dilapidated turf outhouse, that Helgi at Fornverkaskólinn - the Heritage Crafts School had pointed out to me. But Helgi maintains all the turf houses in Iceland.

This turf outhouse, a barn, belongs to Núpsstaður, but is located quite a distance from that farm. It is big and one of the biggest remaining turf outhouse I have come across on my search for turf houses in Iceland.

Only in East-Iceland have I seen such big turf outhouses. I have posted photos of them in my travel-blog: 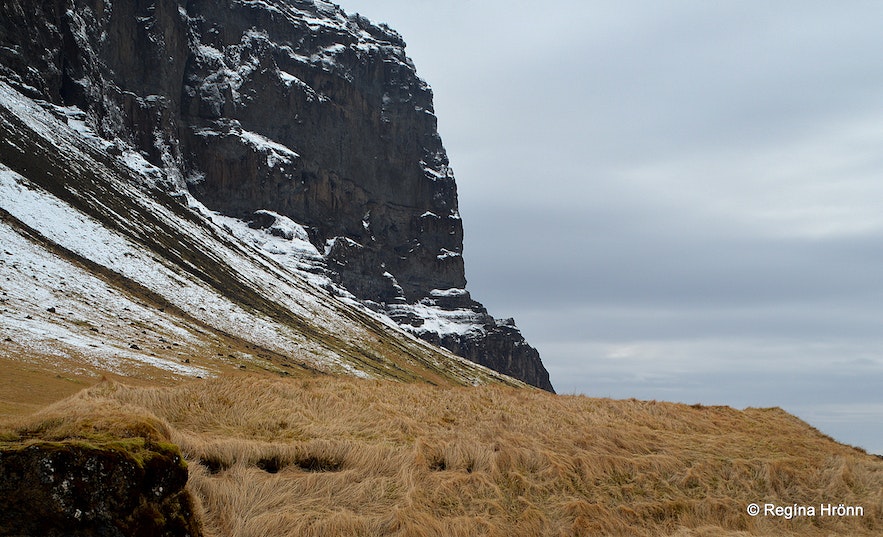 The turf outhouse on the west-side of Mt. Lómagnúpur blends in perfectly with the landscape

I remember seeing many such turf outhouses when I was younger, but they are disappearing now seeing that they need constant maintenance and a lot of money is needed for repairing them.

Unfortunately not enough money is available for maintaining them all. So they will slowly disappear, which is a shame.

I am grateful to Helgi for pointing this turf outhouse out to me as I would never have known about driving this path by Mt. Lómagnúpur otherwise.

Here is the location of Mt. Lómagnúpur on the map. To reach this area it is best to rent a car in Reykjavík and drive along the south coast of Iceland.