In this travel-blog I want to tell you about a beautiful area of Iceland that is often overlooked by visitors, the beautiful Melrakkaslétta peninsula in North-East Iceland.

It is located right above a very popular area in the North, the Jökulsárgljúfur canyon, where my favourite spot in Iceland, Ásbyrgi canyon, is located and many more of the spectacular sights on the Diamond Circle. 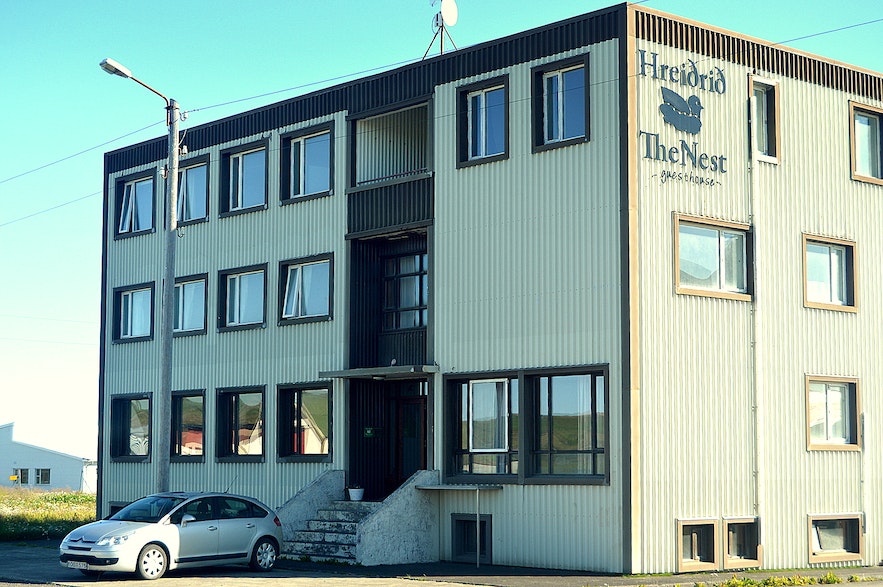 One summer I went on a 3-week-tour around Iceland and visited areas of Iceland which I hadn't seen since I was a teenager, f.ex. Raufarhöfn village, where we stayed for 2 nights in a beautiful guesthouse, called Guesthouse Hreiðrið - Nest Guesthouse.

We found the name to be so inviting and we got a beautiful apartment with a kitchen, which was like a suite, and had a lovely stay there, true to the name of this guesthouse. 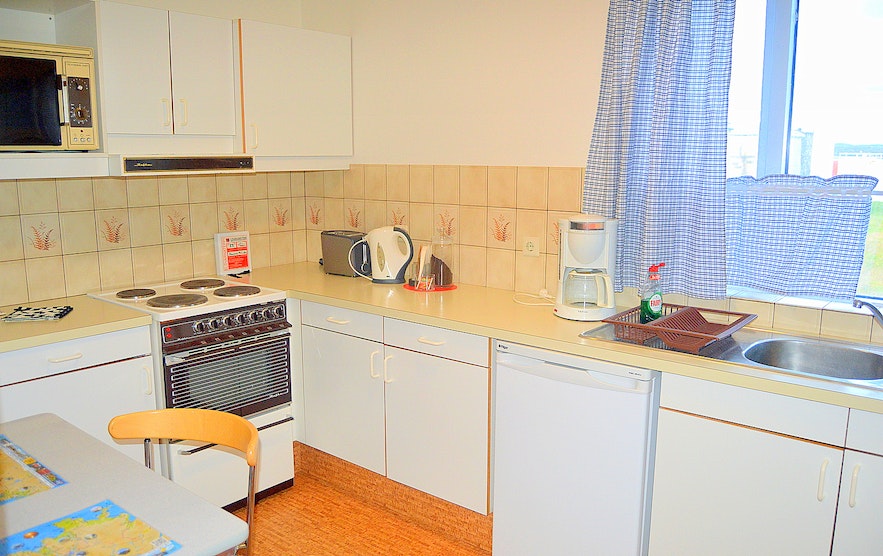 The kitchen in our room at Hreiðrið

During our stay at the guesthouse, we got a great deal of information on the Melrakkaslétta peninsula from the very knowledgeable Halldóra, who both works at the guesthouse and is the Project Manager for the Norðurhjari project, which is the Tourist Association in North East Iceland.

We are very grateful to her as she pointed us to some very interesting and beautiful places in this area. 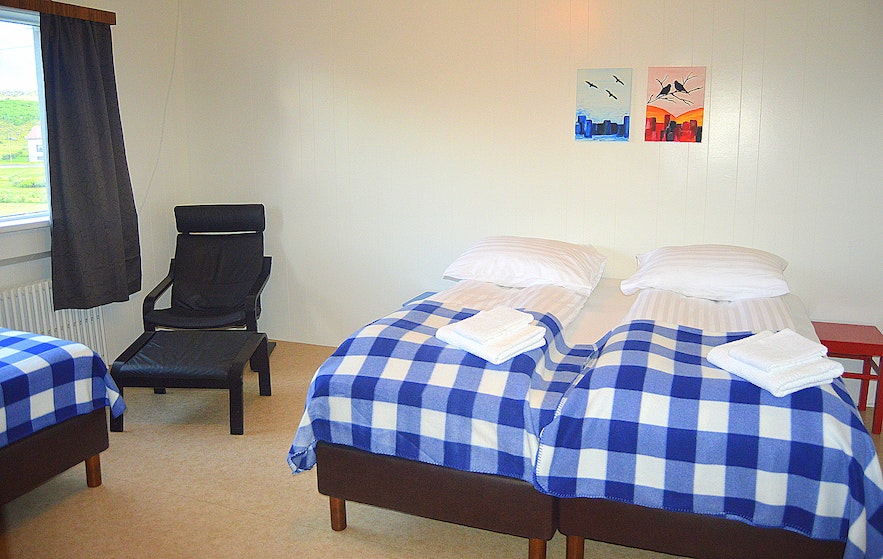 Raufarhöfn village is the northernmost village in Iceland, a beautiful little village, with around 188 inhabitants and a natural harbour. 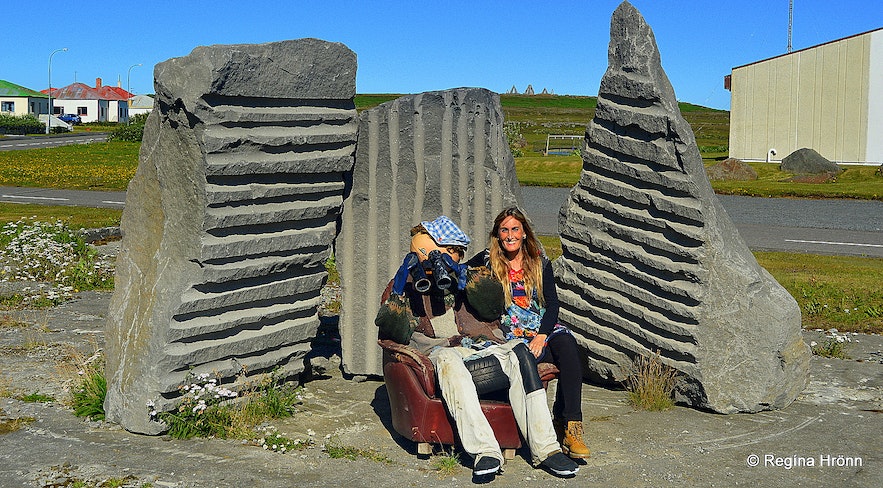 By the miniature version of the Arctic Henge

On our visit to both Raufarhöfn and Kópasker villages, we came across some fun characters made by the artist Sigurlína J. Jóhannesdóttir. She lives on a farm just outside of Kópasker village, and I will show you more of her funny characters in my travel-blog about the west side of Melrakkaslétta peninsula.

I love artwork like this and took a lot of photos with me next to them ;) 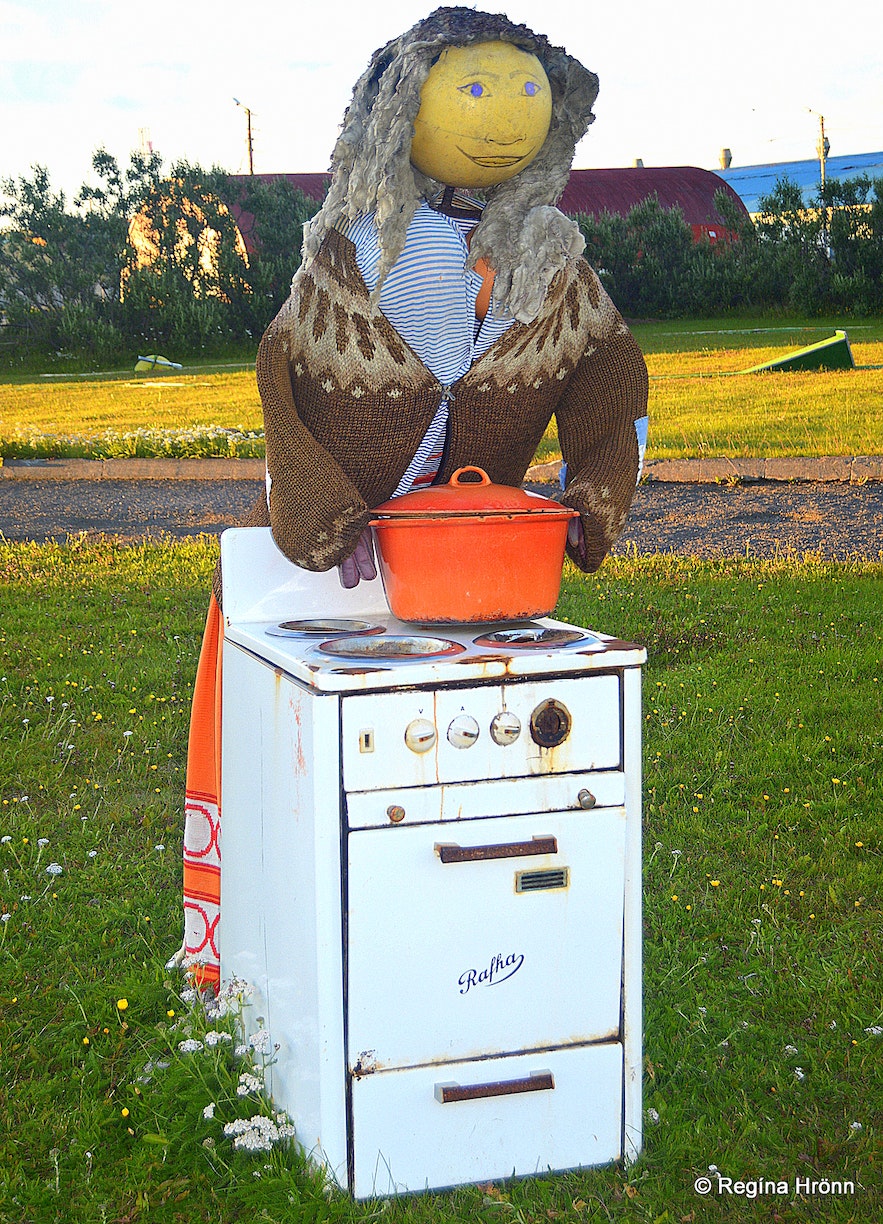 This "woman" lives in Raufarhöfn :) Many of them are cooking food

The first landscape we encountered when we drove up to the peninsula on our way to Raufarhöfn village was the vast, flat prairie of Melrakkaslétta.

I felt like I was alone in the world, we were there late at night and stopped the car by the side of the road and took photos, surrounded by this vast flat landscape with lava formations, which were lit up by the sunshine. It was ever so beautiful. 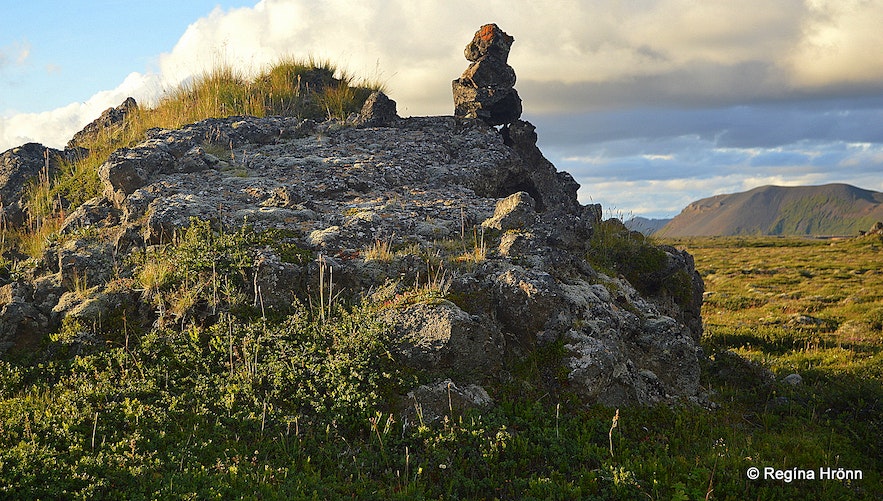 Somewhere on the Melrakkaslétta plain

I had seen photos of a new structure in Raufarhöfn, which is called the Arctic Henge, Heimskautsgerðið in Icelandic, and I was drawn to see it with my own eyes. And I was not disappointed by my visit, I was in awe of the beauty of the Arctic Henge and the peninsula.

I saw so many beautiful spots, which I want to introduce to you, that I wrote several travel-blogs about this remote place in Iceland.

We got settled in our room and went to look for the Arctic Henge, which is situated on a hill by Raufarhöfn village. I was very eager to see it and didn't want to wait until the next morning to visit it. It is a massive structure, made out of basalt columns.

It is not finished yet, but the 3 gates (out of 4) and the massive column in the middle, that have already been erected, were enough to blow my mind.

Work started on the Arctic Henge in 2004 and it has now become the biggest attraction on Melrakkaslétta. 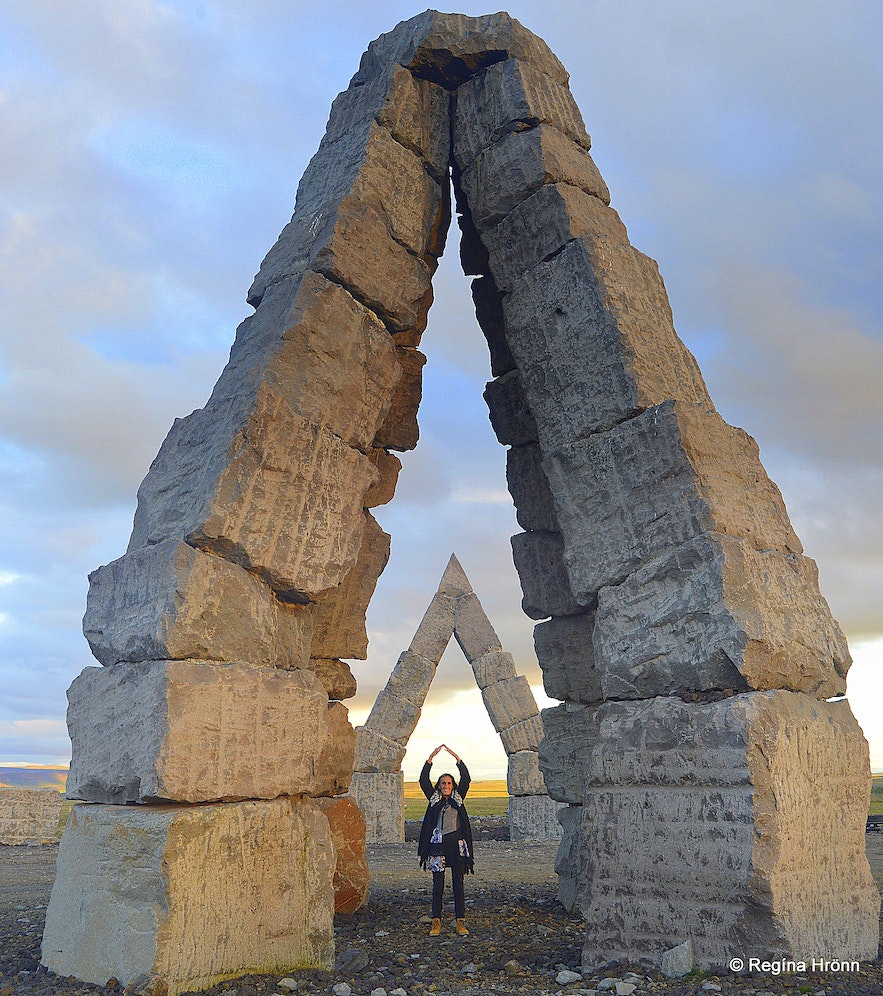 The idea behind the Arctic Henge is to harness the Midnight Sun by the Arctic Circle.

There is an unrestricted view in all directions from the hill on which the Arctic Henge stands. And I can tell you that it is awesome seeing the sun shining through it. And it makes for very impressive photo opportunities.

The instigator for the Arctic Henge was the hotel manager of Hotel Norðurljós, Erlingur Thoroddsen, who sadly died in December 2015. The artist Haukur Halldórsson designed the Arctic Henge. 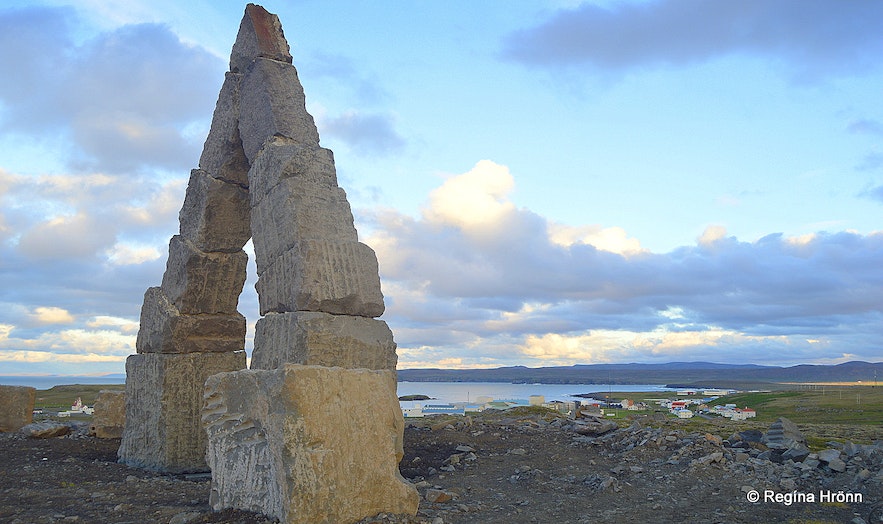 The Arctic Henge and Raufarhöfn village

The idea for the Arctic Henge derives from Norse Mythology; from the best-known Edda poem Völuspá - The Prophecy of the Seeress. This is the old belief of the Vikings, called Ásatrú in Icelandic. 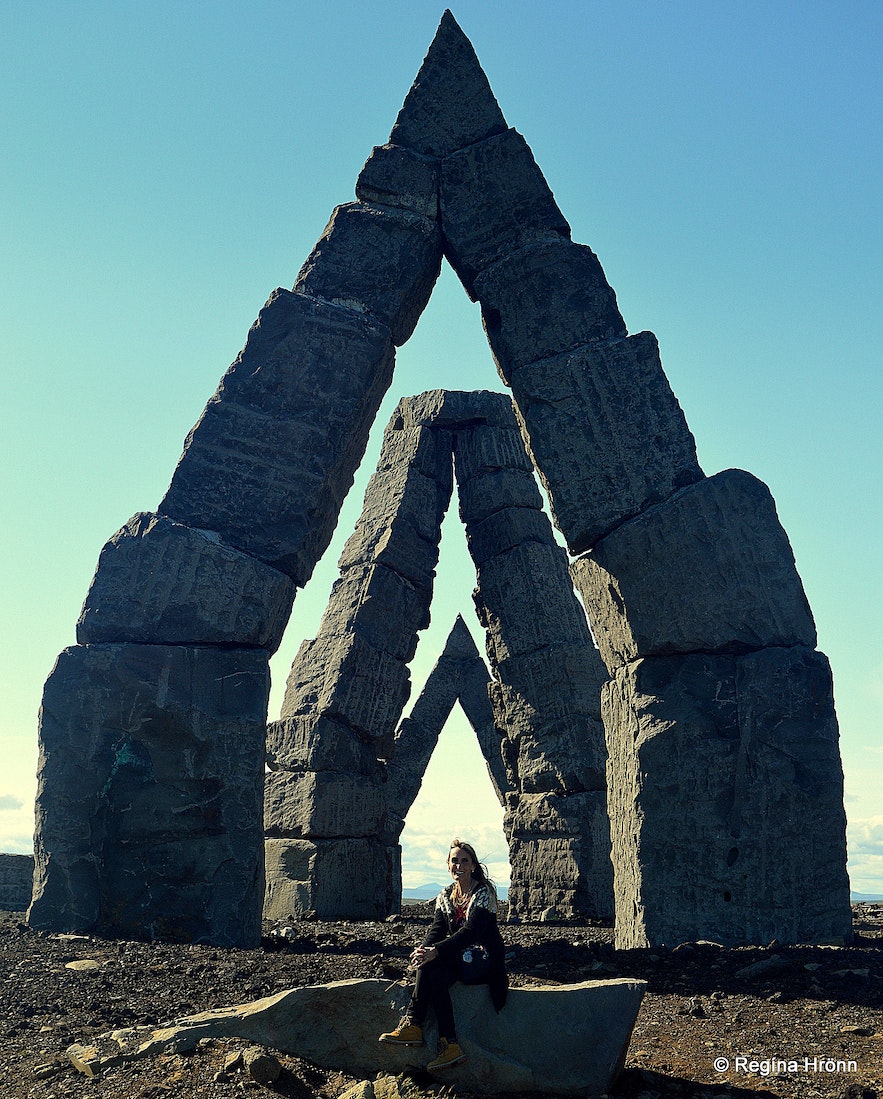 And there will be a Dwarf Path with 72 stones, each one of the stones will be representing a dwarf's name. This will be quite something! It reminds me of Stonehenge and it will also serve as a giant sundial.

A new footbridge was added from the parking lot to the Arctic Henge in 2019. It was named Bifröst and serves as a bridge between earth and the dwellings of the pagan gods. You can see photos here.

In Norse mythology, Bifröst is the rainbow that carries the pagan gods to earth when they have some business with men. 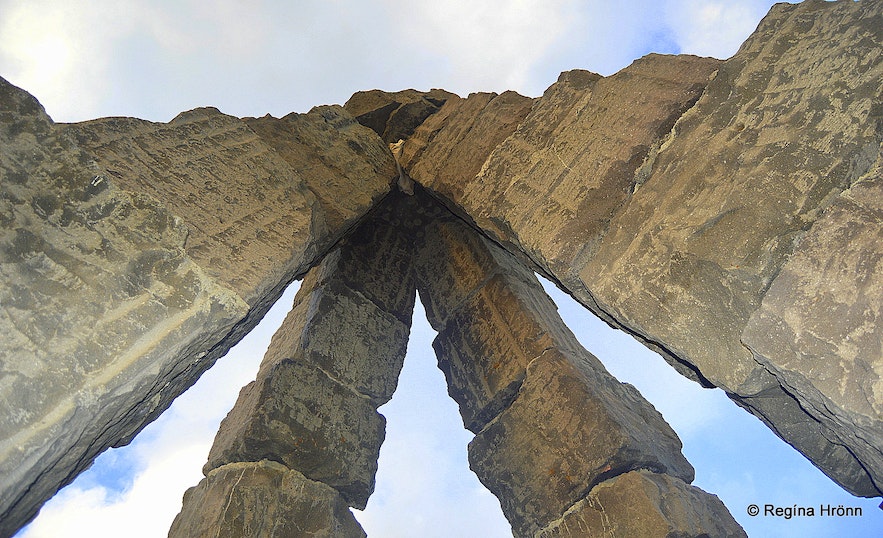 There are so many fun photo opportunities here, and I went wild taking photos from different angles. Just one thing, let's not climb on these rocks; doing so is both disrespectful to the project and plain dangerous! And no tourist cairns, that is very much frowned upon.

See also my travel-blog: The Old Tradition of Creating Stone Cairns in Iceland

After exploring the Arctic Henge for the first time - we went up there 3 times in different light - we had a good night's sleep at our lovely Guesthouse Hreiðrið - Nest and looked forward to a full day of exploring Melrakkaslétta plain the next day, and to cross the Arctic Circle. 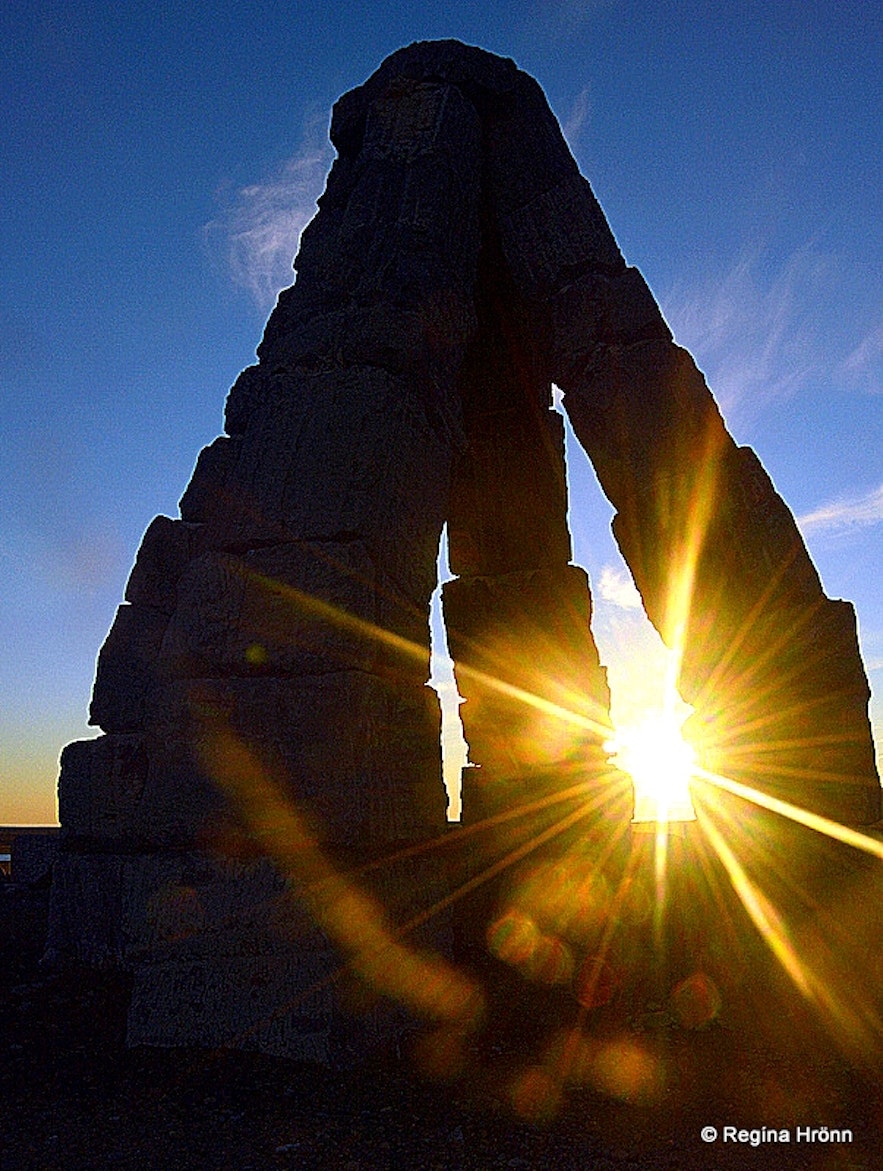 Sunset by the Arctic Henge

From road 85 turn onto road 874 for Raufarhöfn and Melrakkaslétta. The Arctic Henge is located on the north side of the village Raufarhöfn. 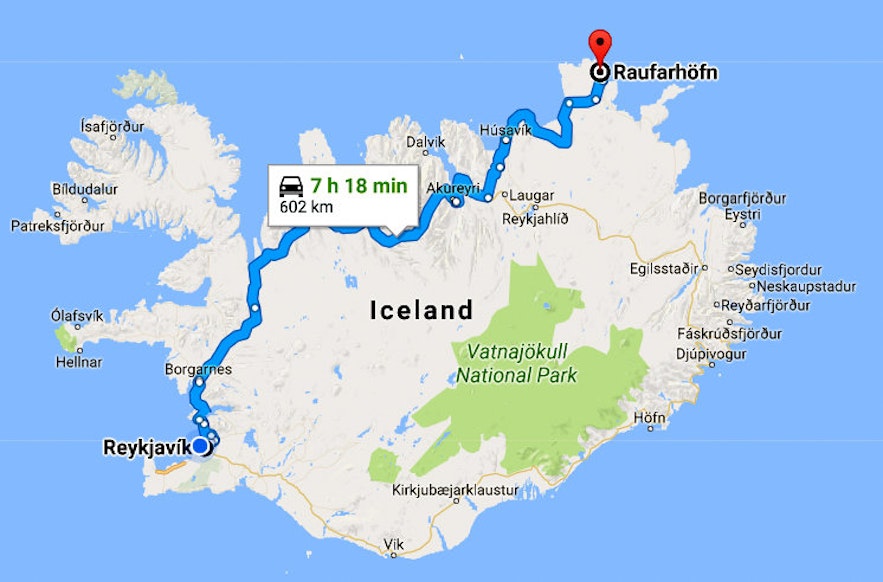 You can rent a car in Reykjavík, and drive up there in a couple of days. There are many beautiful stops on the way so do take your time and make the most of your Iceland visit.

Here are the other travel-blogs I wrote about my visit in the right order:

Have a lovely time in Raufarhöfn and at the Arctic Henge :)