Svartifoss & other beautiful Attractions in Skaftafell in South-Iceland

Svartifoss waterfall is one of the unique waterfalls in SE-Iceland. It is situated in Skaftafell nature reserve, which has since 2008 belonged to Vatnajökull National park.

Skaftafell is a true oasis after driving through the vast black lava sand plains of Skeiðarársandur glacial outwash. On this drive, you will see glacier tongues in abundance, as here we are in the Vatnajökull glacier region, which is the largest of Iceland's glaciers.

It is especially beautiful driving in this area on a sunny day with blue skies.

Now let's have a look at Svartifoss waterfall. 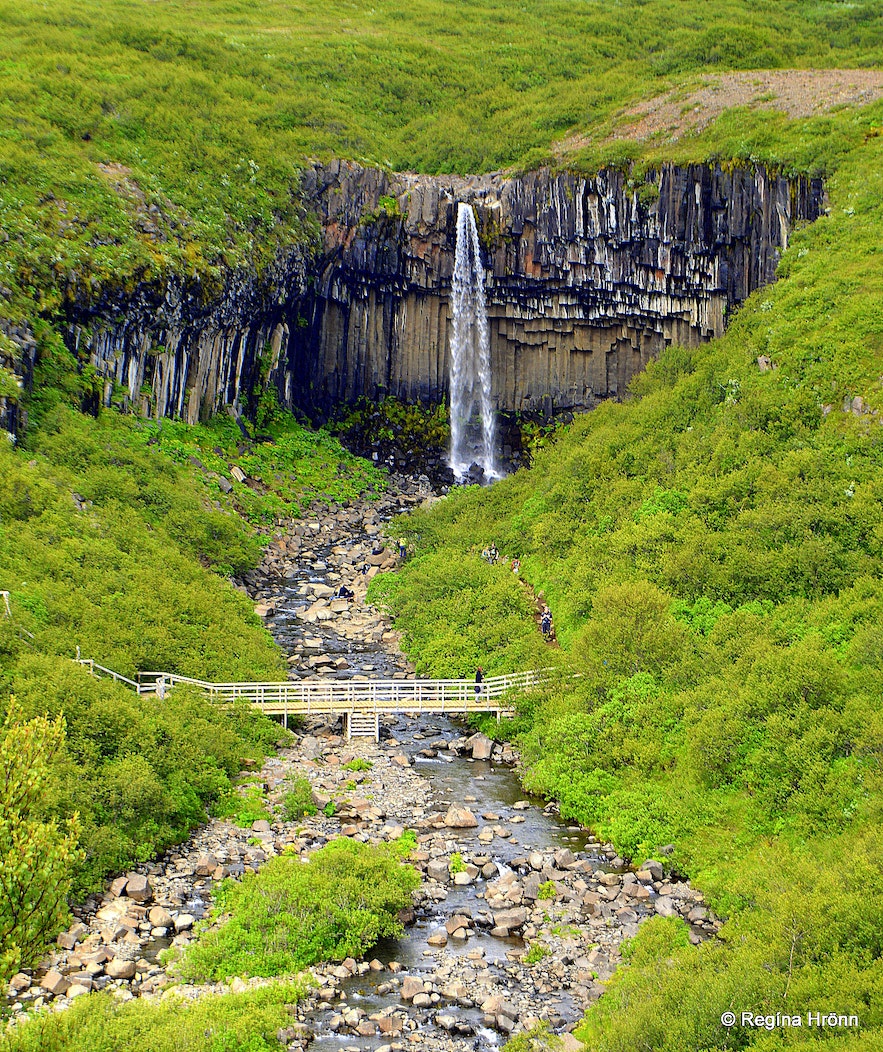 Svartifoss as seen from above

Svartifoss is such an elegant waterfall, 20 metres tall, and black columnar basalt formations beautifully frame the waterfall and give it its name, Black Fall. From afar it looks like a big heart.

It is a very romantic waterfall and one of my girlfriends got engaged by Svartifoss :) 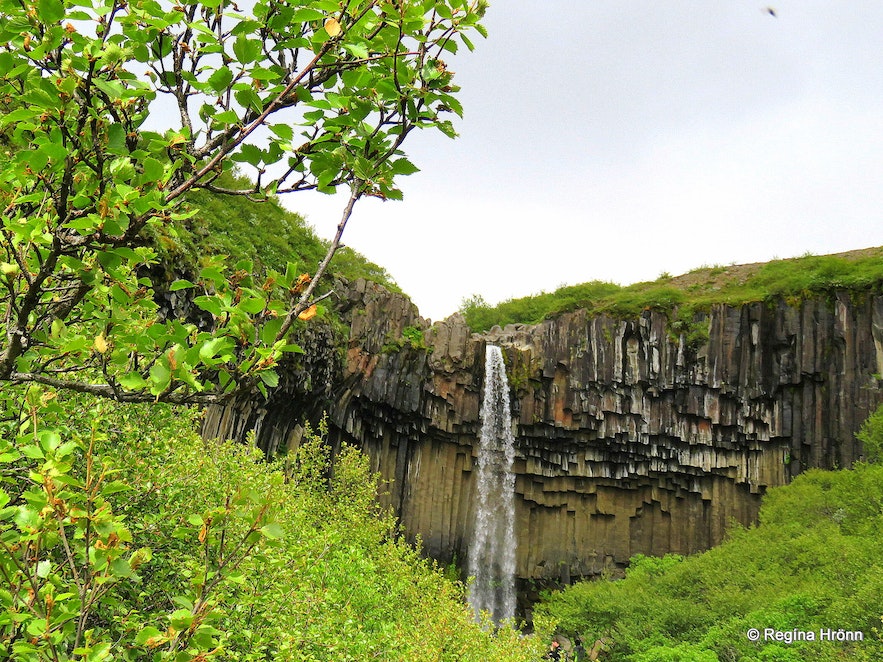 Svartifoss cannot be seen from the road and the hike up to it takes some 90 minutes back and forth with photo stops. If you do the circular hike, which I did and show you in this travel-blog, then the hike is 5.5 km according to the website of Vatnajökull National Park.

The whole circle took me 3 hours to complete, but then I spend a lot of time taking photos for my travel-blog, so you could maybe do this circle in a shorter period of time.

The short video above I shot so that you can hear the waterfall, as it were ;)

You can walk straight down to Svartifoss to see it up-close. Last time I visited it had been fenced off for nature protection, so we cannot get as close to it as before, but pretty close all the same.

I think it is better now that the waterfall has been fenced off as before I couldn't take a decent photograph of it as visitors with tripods would be lined up right in front of it. 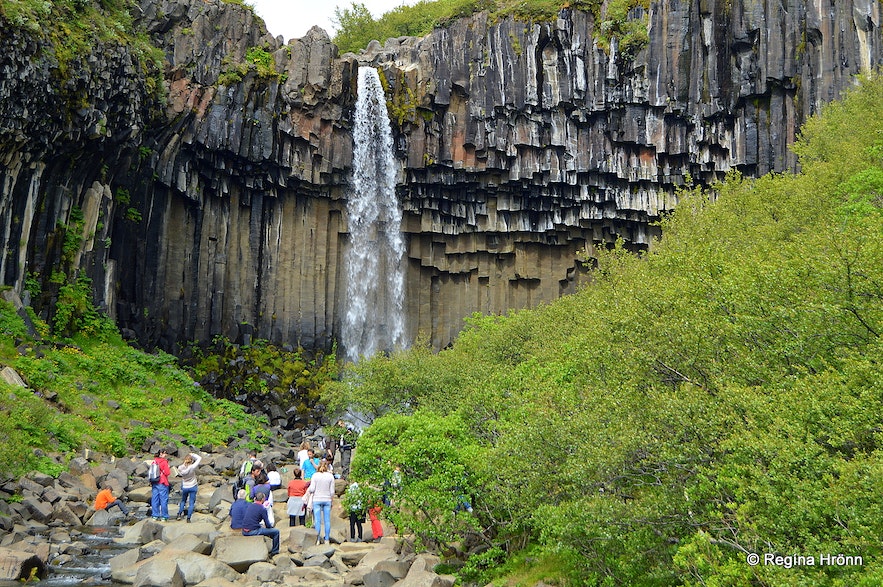 The hike is uphill from the camping ground, but not too taxing. And it is so worth it.

The small river Stórilækur (Big creek) in which Svartifoss cascades, originates below Kristínartindar mountain peaks and runs through Bæjargil gorge.

The beautiful hexagonal basalt columns at Svartifoss are believed to have inspired our State Architect Guðjón Samúelsson when he designed the ceiling in Þjóðleikhúsið, our national theatre, and Hallgrímskirkja church, which is one of the landmarks of Reykjavík - Iceland's capital city. 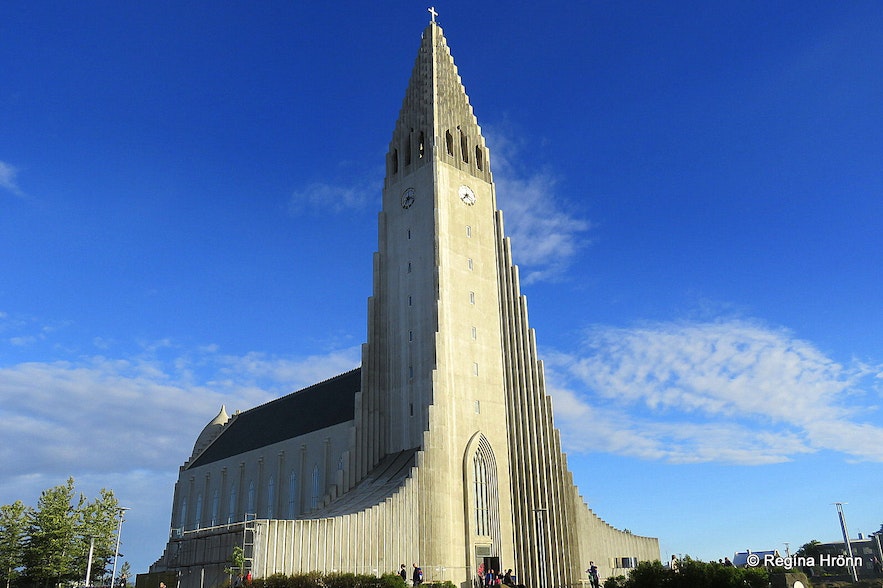 On your way back you can either return the same way or cross the bridge by Svartifoss and return back on the western side.

On that route, you will get a closer look at some of the other 3 waterfalls, and get to see Selið turf house and the lovely Lambhagi - Lamb Pastures.

The waterfalls below Svartifoss 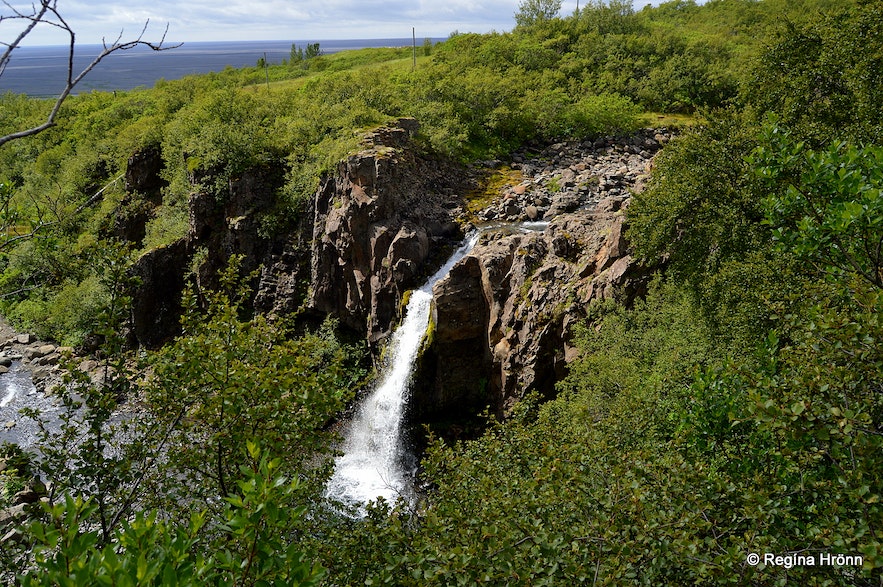 Photo of Magnúsarfoss from the east bank of the river.

The waterfalls below the famous Svartifoss waterfall are called: Magnúsarfoss, Hundafoss, Þjófafoss and the last one was called Lambhagafoss waterfall, but it disappeared during Skeiðarárhlaup glacial burst, which has caused the land to rise some 10 metres since 1800, according to the information sign at Lambhagi.

You can see Magnúsarfoss waterfall from the east bank on your way to Svartifoss, somewhat blocked by the trees. It is the second waterfall which you will see on the hike, first you will see Hundafoss, see my photo below. 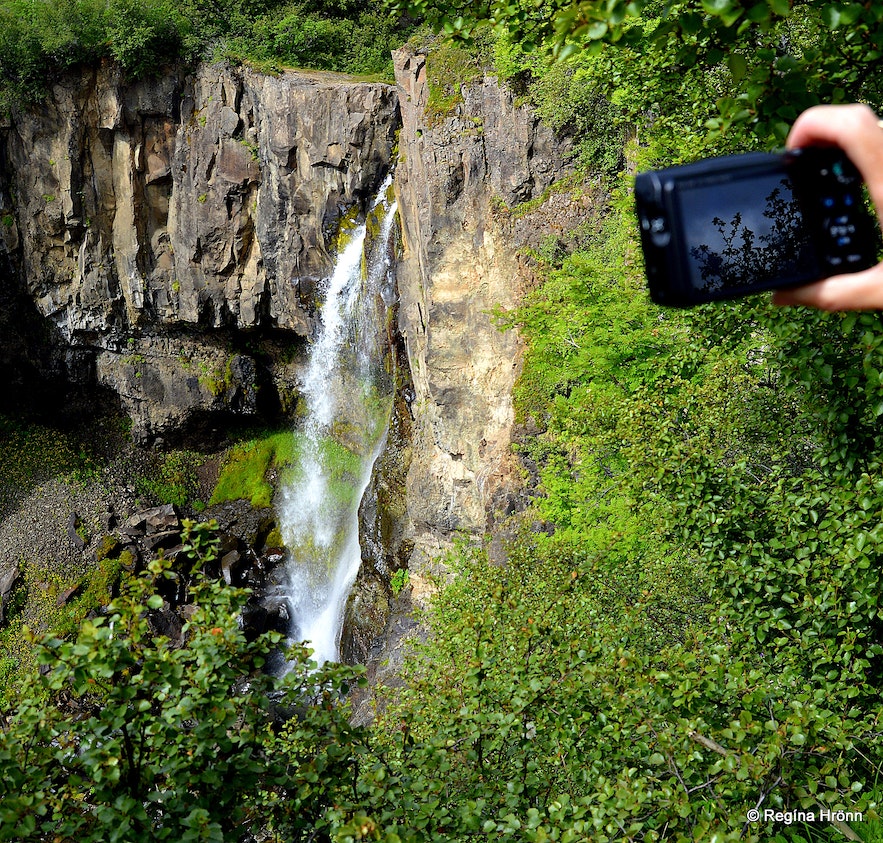 Photo of Hundafoss from the east bank of the river

It is beautiful on either side of the river though, just a different angle. 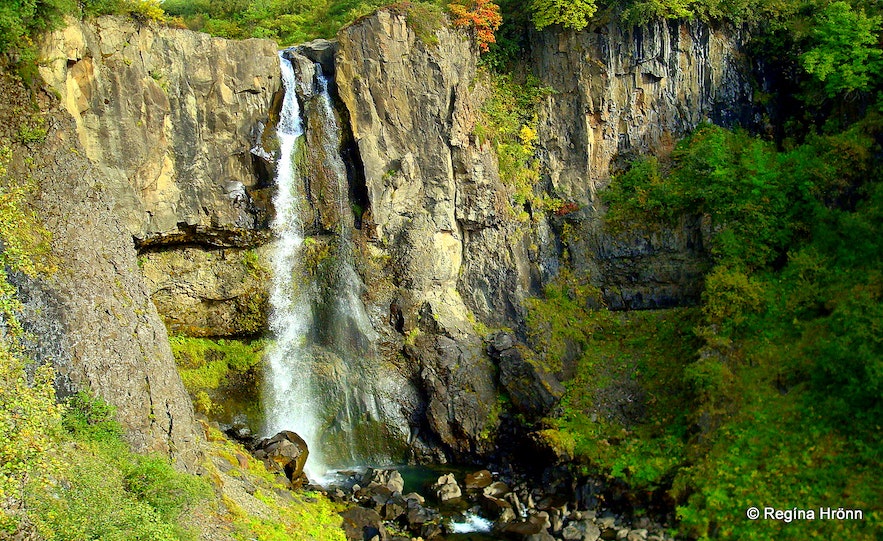 Photo of Hundafoss from the west bank of the river.

Hundafoss apparently got its name - Dogs' Falls - as during the swelling of the river dogs from the farms there sometimes floated off the waterfall! 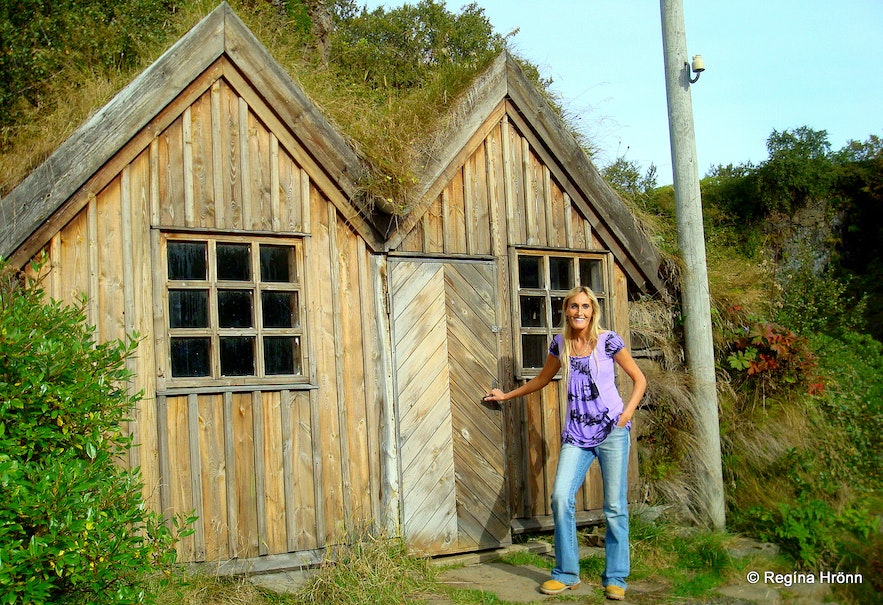 The home electric generator in Skaftafell

The generator is to be found inside a turf house looking structure, which looks quite magical in the gorge. If you pass the turf house you will get a view of the Magnúsarfoss waterfall from the west bank. 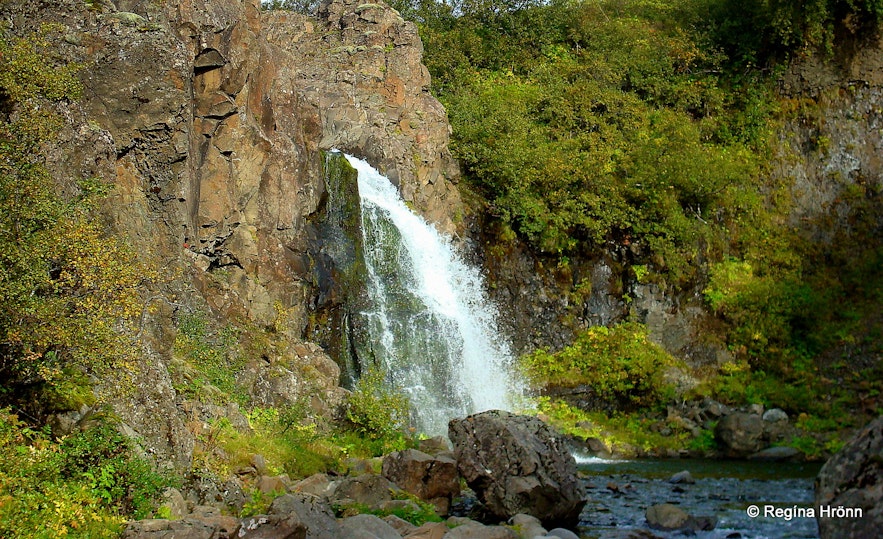 Magnúsarfoss waterfall from the west bank of the river.

To see some of the waterfalls from the west bank you have to go to the edge of the gorge and there is a lot of shrubbery blocking the view.

I never thought I would be complaining about trees in Iceland ;) 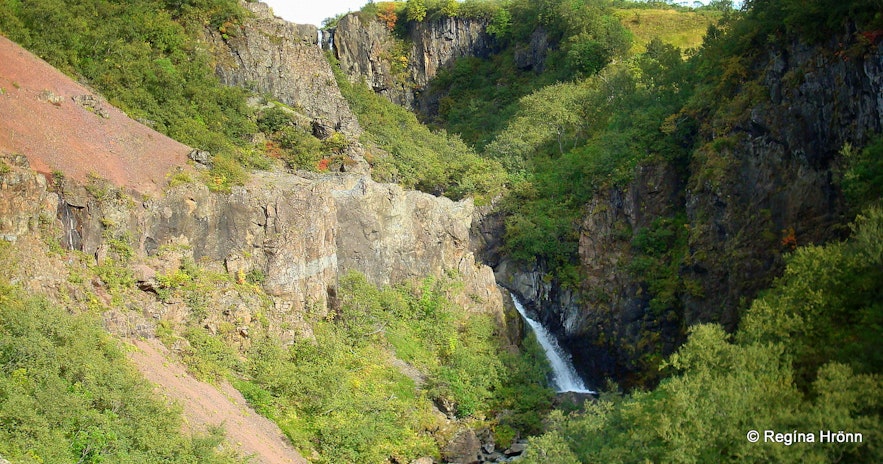 Þjófafoss as seen from the west bank.

Further down in the gorge you can see a small waterfall called Þjófafoss - Thieves' Falls. The waterfall above it is Hundafoss - Dogs' Falls.

It is well worth it to take a relatively short hike up Skaftafellsheiði heath to Sjónarsker for a great view of the surrounding area. There at 310 meters above sea level, you will find a view-dial.

This view-dial was designed by the instigator of view-dials in Iceland, Jón J. Víðis, and erected by Mennamálaráðuneytið - the Department of Education in 1973.  Jón J. Víðis was the great-uncle of my husband's, who is named after him.

My father-in-law, Jakob Hálfdanarson, has taken over the business of making these view-dials and you can find his view-dials in many places in Iceland :) 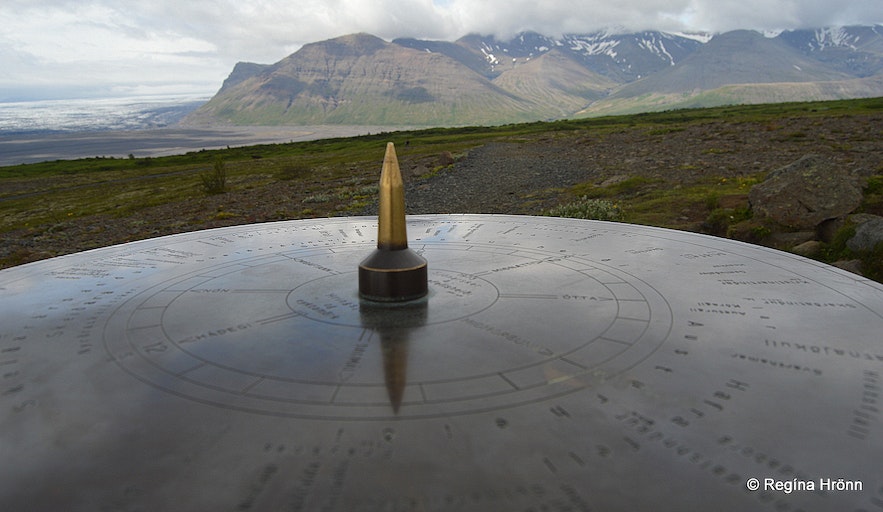 The view-dials show the names and heights of the surrounding mountains.

I love finding these view-dials all around my country and seek them out on my travels.

You will find a lovely small turf farm in Skaftafell, called Selið. It was built in 1912 in the southern style and is one of the few remaining turf houses in South Iceland.

Those of you who read my travel-blog know that I have visited all of the turf houses and turf churches in Iceland and have written a travel-blog about most of them.

I adore these traditional houses, in which Icelanders lived for more than a millennium.

See also my travel-blog: A List of the beautiful Icelandic Turf Houses, which I have visited on my Travels in Iceland 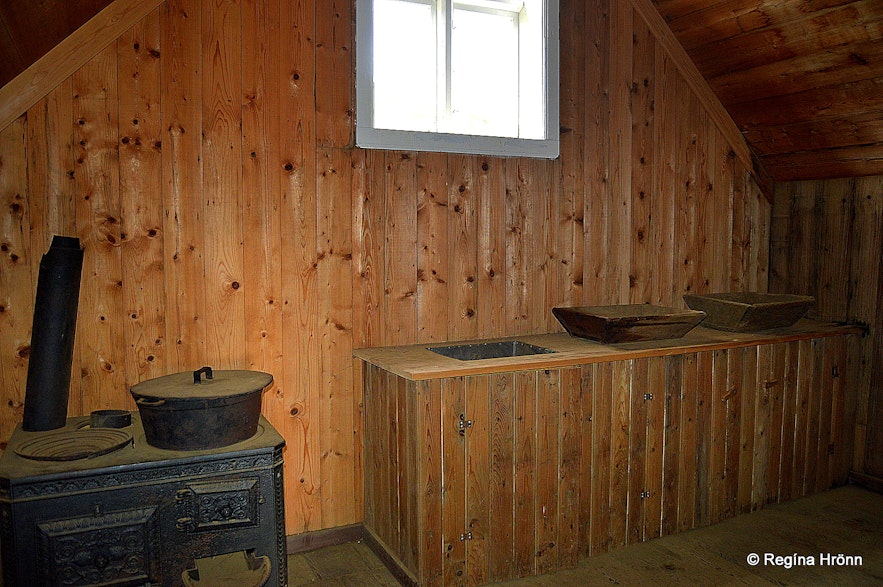 Selið turf house was built from driftwood from the coastline of this area, turf and rock. 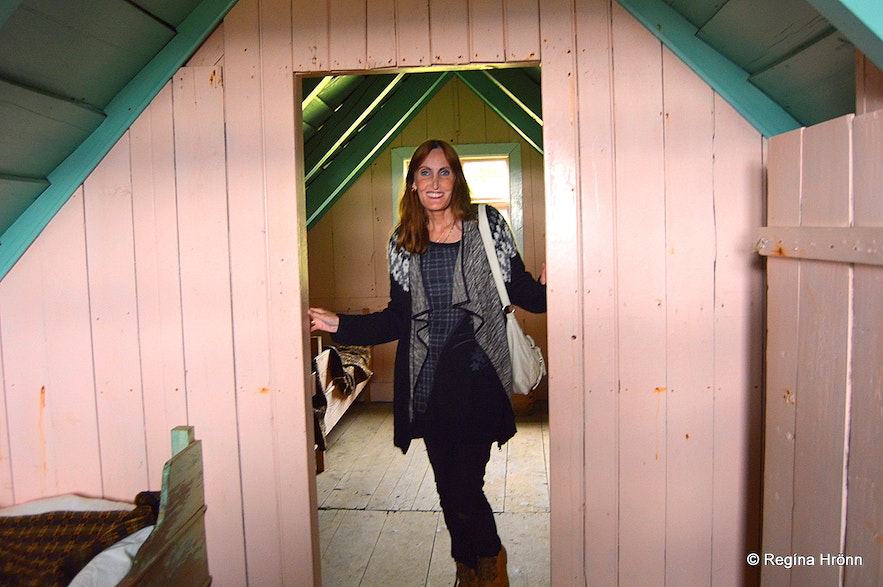 This area was much more isolated in the olden days with glacial rivers on both sides - it was indeed one of the most isolated areas in Iceland. It wasn't until 1974 that ring-road 1 was opened.

Before that time the road used to stop by Mt. Lómagnúpur and we from the west could only have a peek into the landscape further on. 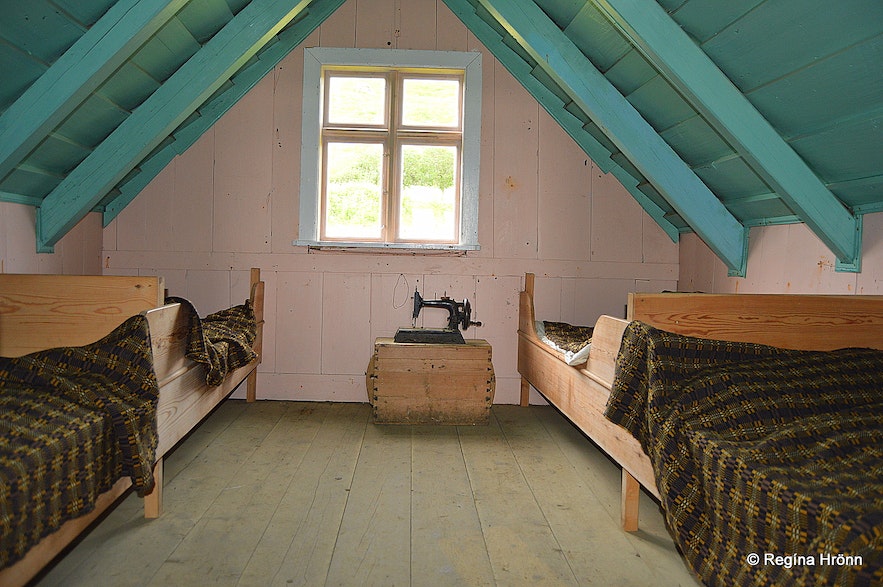 People were living at Selið at least in 1832, but at that time the farm was moved up on the hill as the glacial river Skeiðará was playing havoc in this area.

The last inhabitants, Runólfur Bjarnason and his wife Ólöf Sigurðardóttir, lived in this turf farm until 1946.

Most of the remaining turf houses in Iceland, not all though, are under the supervision of Þjóðminjasafn Íslands - the National Museum of Iceland. 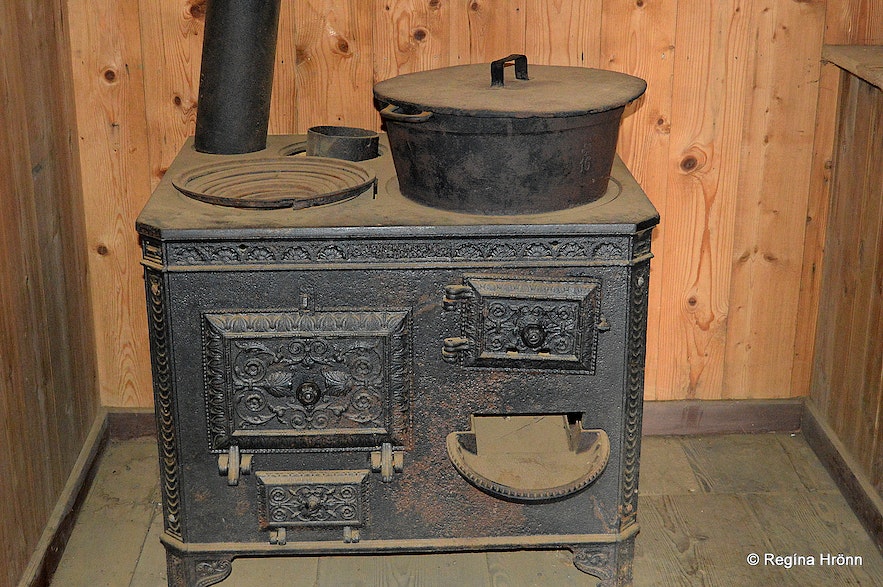 The National Museum repaired and restored Selið from 1970-1980.

We are allowed to have a peek inside the turf house in the summertime, but seeing that the turf houses are historic buildings, then we should tread lightly and show respect. No food is allowed inside Selið. 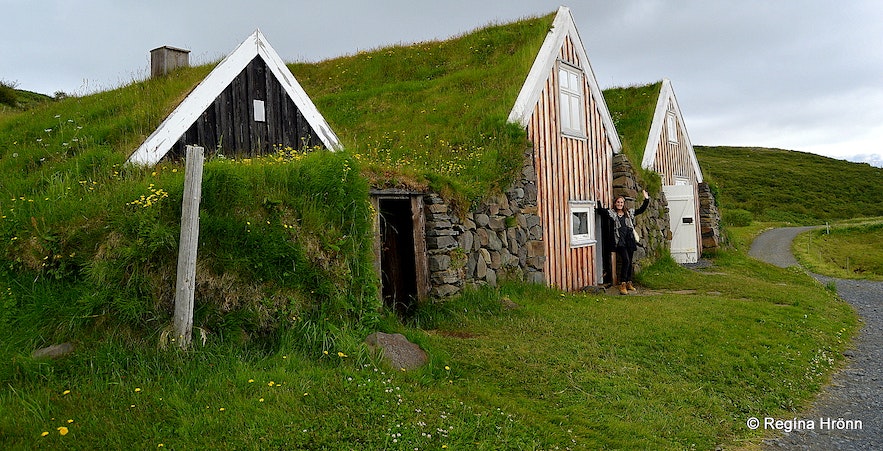 Turf houses must be maintained regularly and during my visit, in the summer of 2015, when I took the photos, it was being painted, so I guess it must be black in colour now.

Here you can see the location of Selið on Google maps. 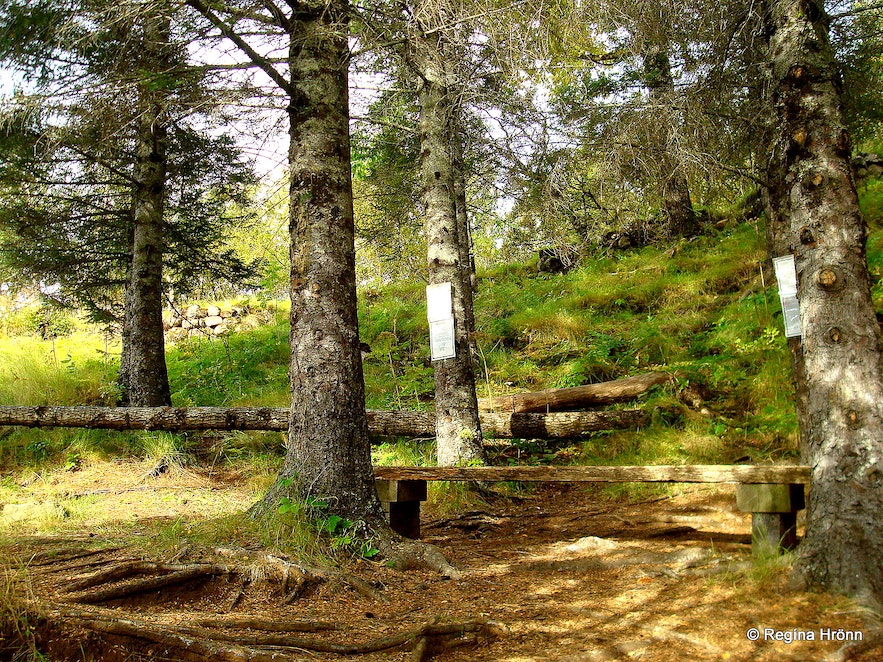 This is such a lovely spot and imagining it being crowded by lambs makes it even more special.

The river Stórilækur, which flows from the Svartifoss waterfall and the other 3 waterfalls turns into a small still lake here with small fish in it - it is ever so peaceful and serene.

I recommend resting here for a while after visiting the waterfalls, taking in the tranquillity of this lovely place. 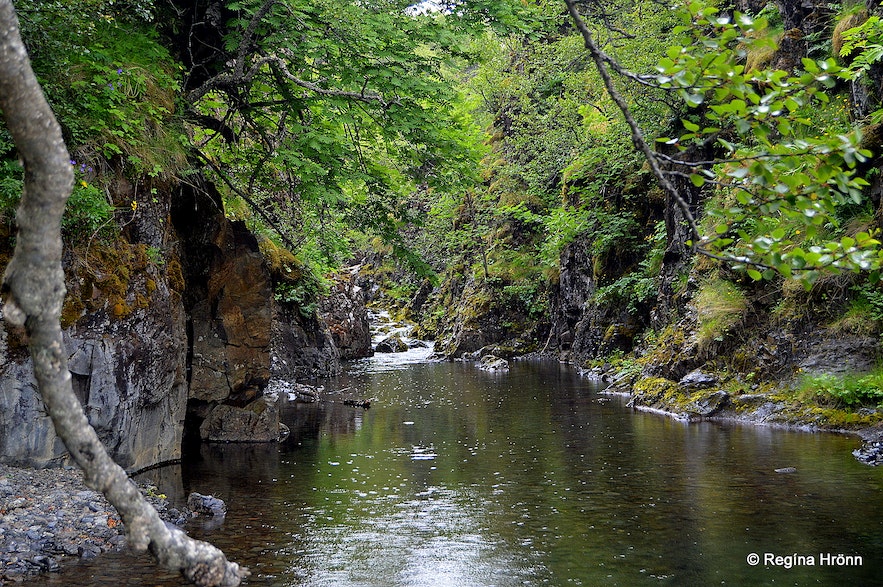 You now return to Skaftafell Visitor centre, which is quite close by. You can also walk around the ruins of the old turf structures in the old field - Gömlutún. Here you can see the history of farming for the past centuries at Skaftafell, but older ruins are buried beneath the Skeiðarársandur glacial outwash. 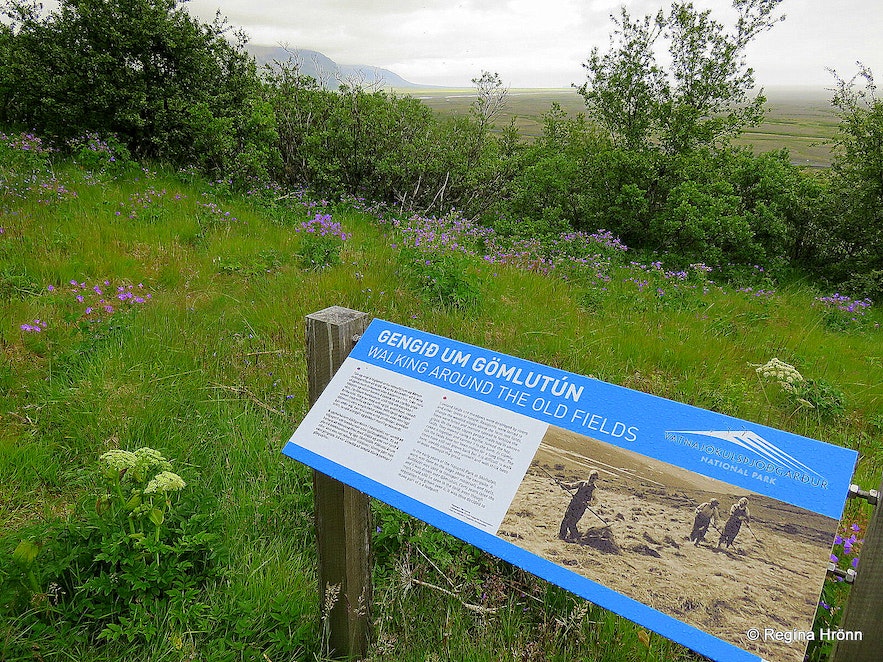 An information sign in Skaftafell about the old fields

You can also hike to the edge of Skaftafellsjökull glacier, which is an easy 3.7 km round-trip, which starts from the Visitor Centre in the opposite direction of the previous hike. A part of the hike is paved but then it turns into gravel.

The return hike is around 1.5 hours, depending on how close you go to the edge of the glacier. Be careful here though and never go unaccompanied on the glacier. The glacier is moving and there are deadly crevasses in the ice, which only experienced glacier guides know about.

If you fancy going glacier hiking you can join:

Here you can see the location of Skaftafell and Svartifoss waterfall on the map. 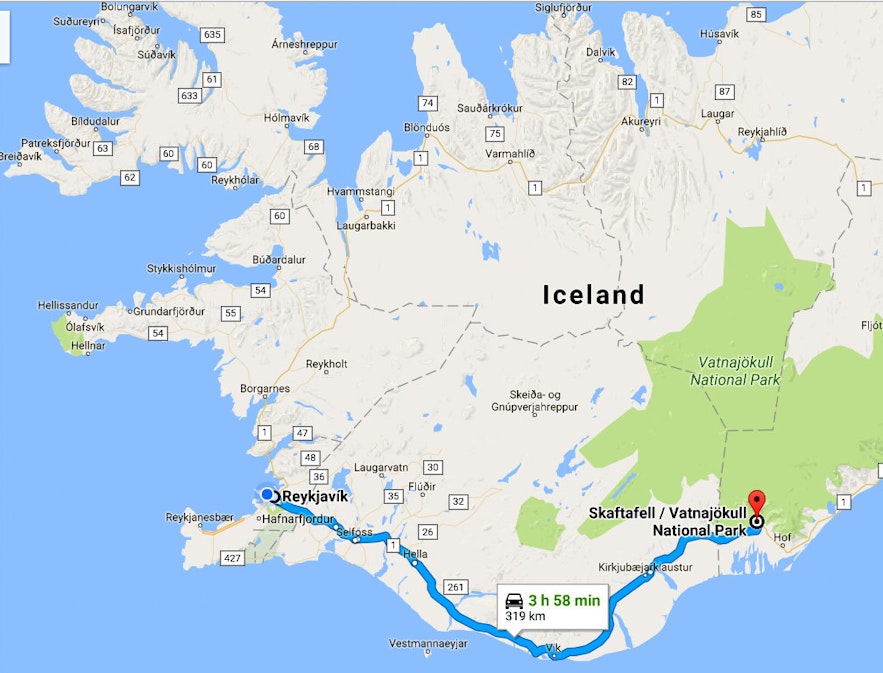 Skaftafell is located some 326 km away from Reykjavík on ring-road 1 and 2 km on road 998 for Skaftafell.

You can rent a car in Reykjavík and drive there in 4 hours. 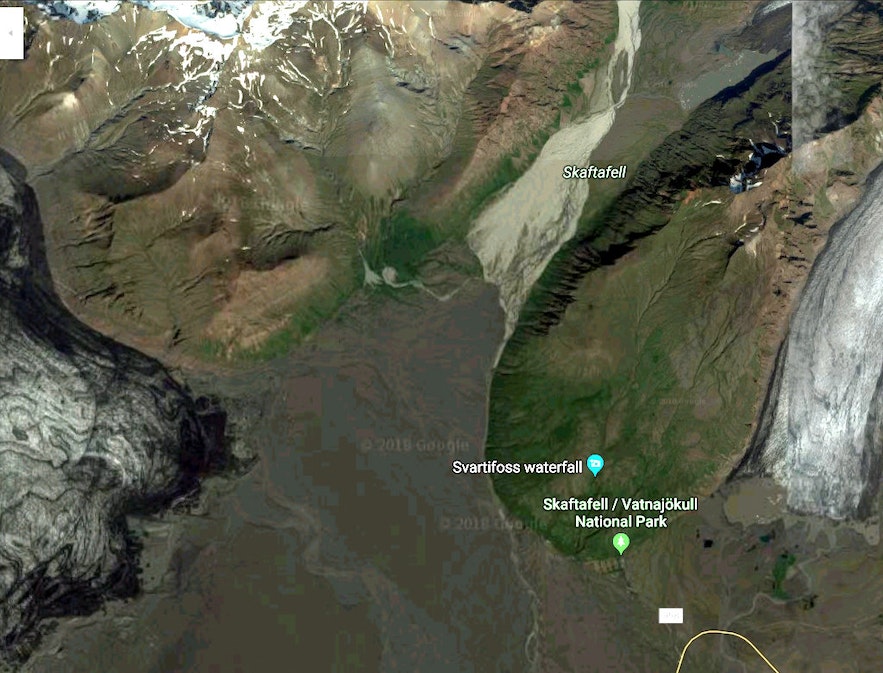 There are many stops on the way so I would recommend that you take it easy and visit all the major sights n the South-coast along the way, f.ex.:

The beautiful Waterfalls on the South-coast of Iceland 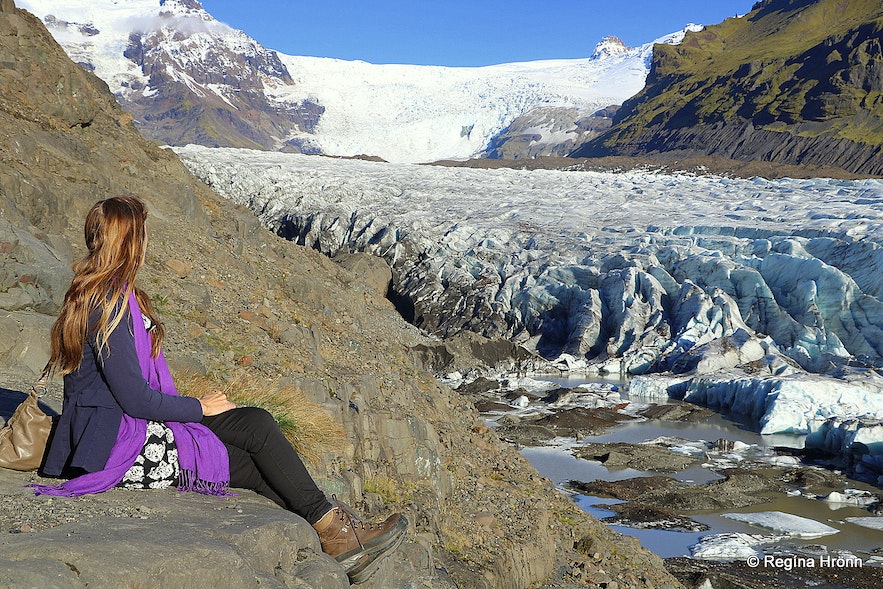 Svínafellsjökull glacier where a Game ot Throne scene was filmed

I haven't hiked on Svínafellsjökull glacier yet, I have just hiked up to the edge of the glacier (see my photo above), but if you want to read up on glacier hikes then I have added a travel-blog about a glacier hike on Sólheimajökull glacier.

Have a lovely time at the beautiful Skaftafell :)