I found one such story called Prestsdóttir - the Daughter of the Minister. It tells you the story of the revenge of the Icelandic elves in South Iceland. 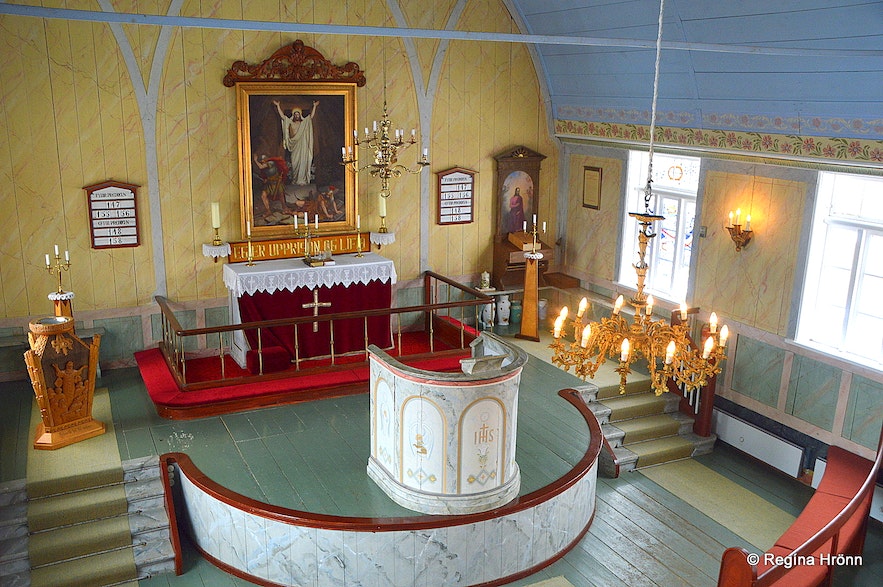 Here is the folklore as it is told in Þjóðsögur Jóns Árnasonar - the Collection of Folklore by Jón Árnason - 3rd Volume page 77. I translated it into English for you:

"At Prestbakki in Síða in Skaftafellssýsla county, there once lived a pastor called Einar. He was wealthy and had a number of kids. 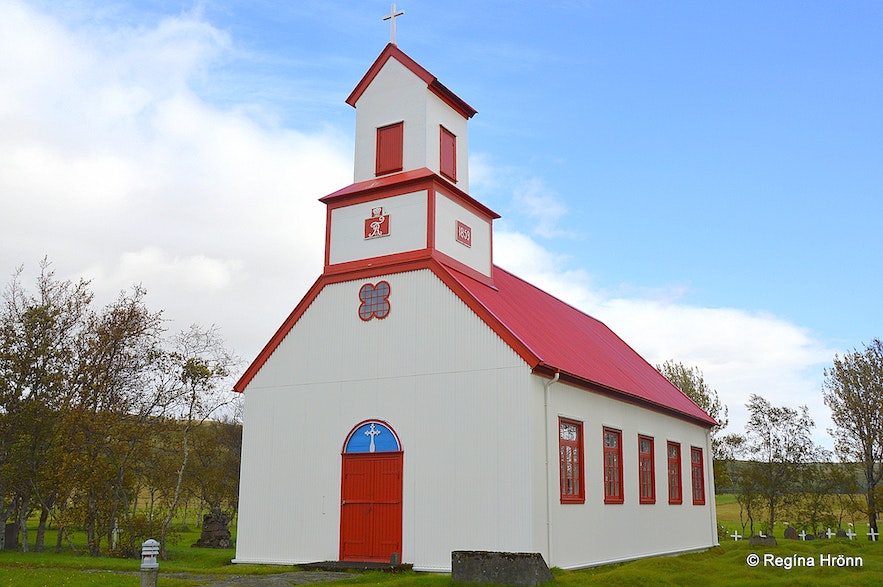 Prestbakkakirkja church in the fall

He didn't believe that elves existed and spoke disrespectfully about them.

He claimed that elves had never existed and dared them to make themselves seen to him if they existed.

He often boasted that they didn't dare attack him. 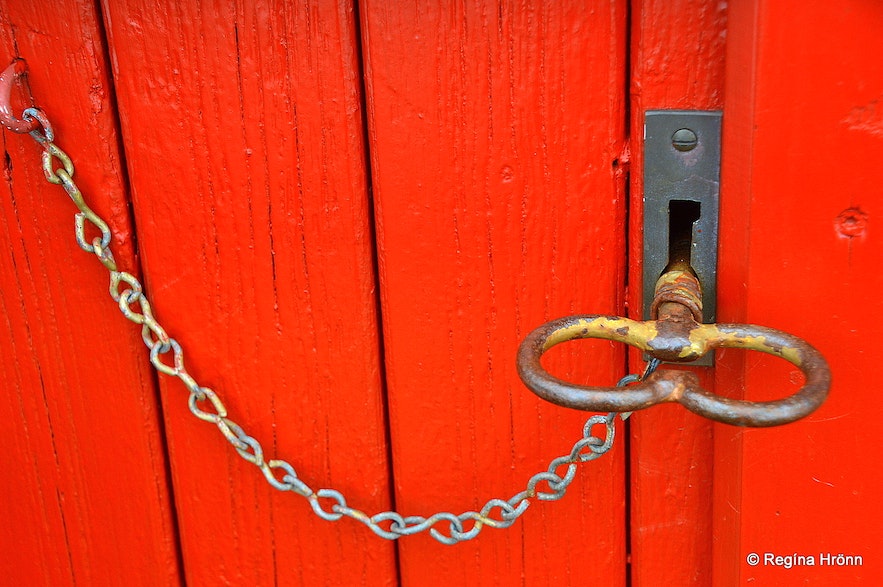 One night he had a dream that a man came to him and said: "Here you see an elf man as you have desired for the longest time.

​You have repeatedly spoken disrespectfully about us elves and dared us to find you.

You fool, you pretend to know things, which you have no means of knowing anything about, and deny the existence of elves. 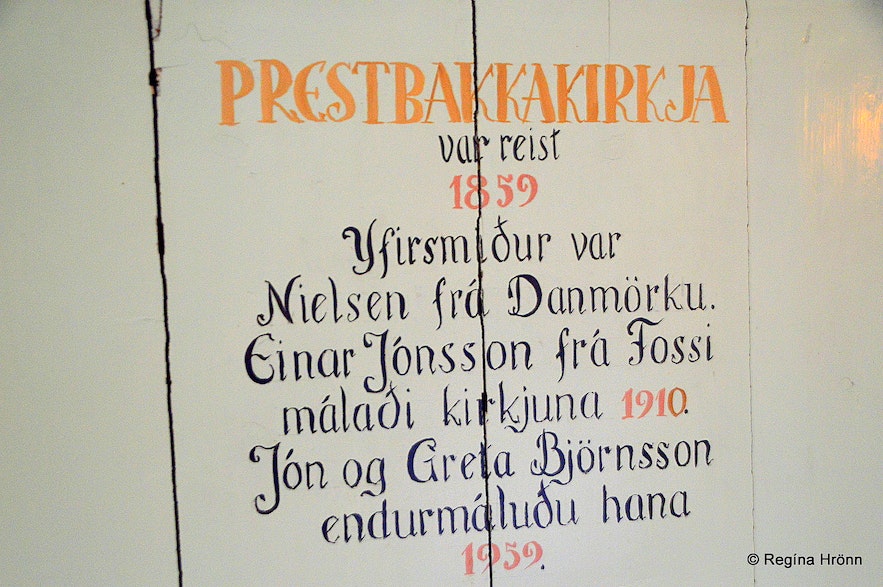 Prestbakkakirkja church was erected in 1859

From now on you shall not deny that we exist, as here you see an elf man and as a proof thereby I will take your oldest daughter and you will never see her again."

As soon as he had uttered these words he disappeared, and it seemed to the minister that as he awoke he could see the face of the gruesome elf fading by his bed. 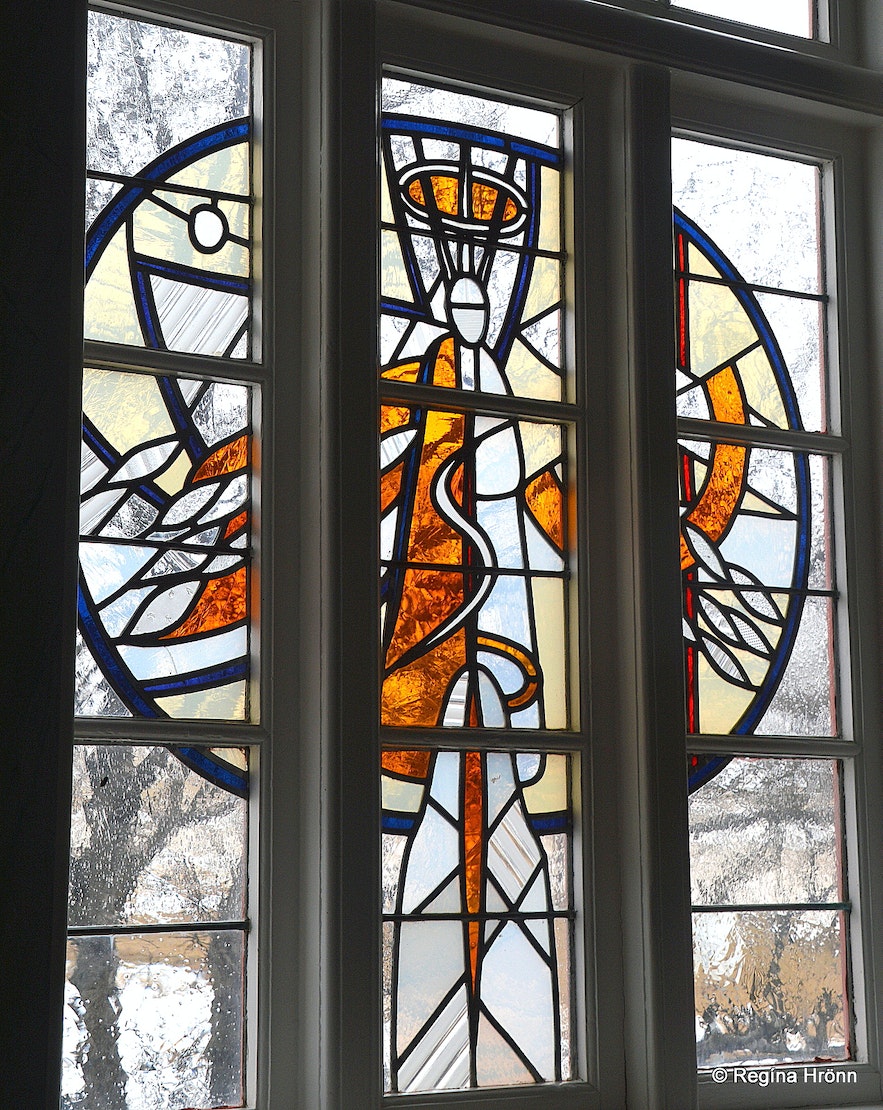 He got up and found that his twelve-year-old daughter was missing.

People widely searched for her for a long time, but she couldn't be found.

Time passed and until the next New Year's Eve, the minister often thought about this event and regretted how ignorant he had been. 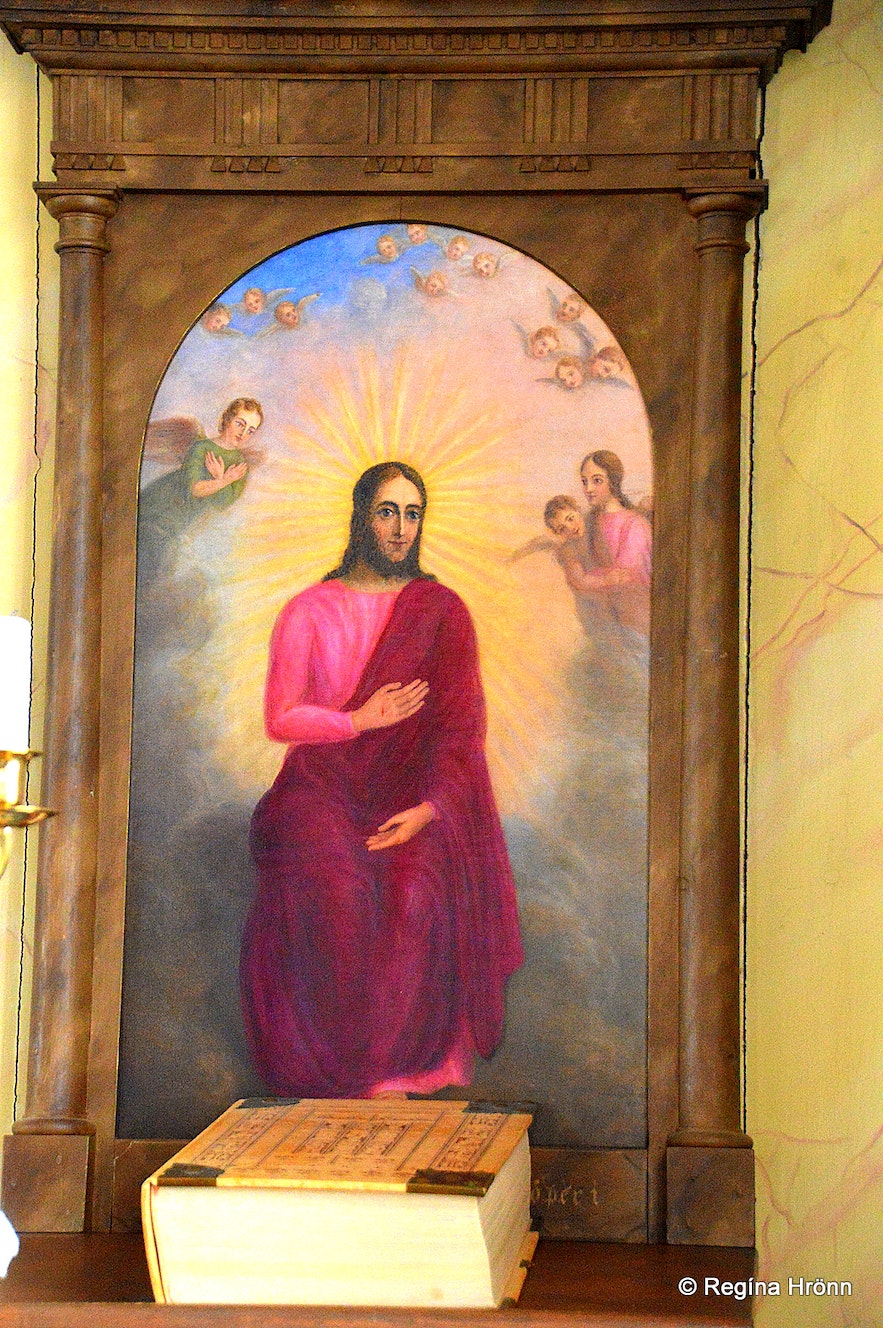 But on New Year's Eve, he dreamt that his daughter came to him. She was happy and healthy. 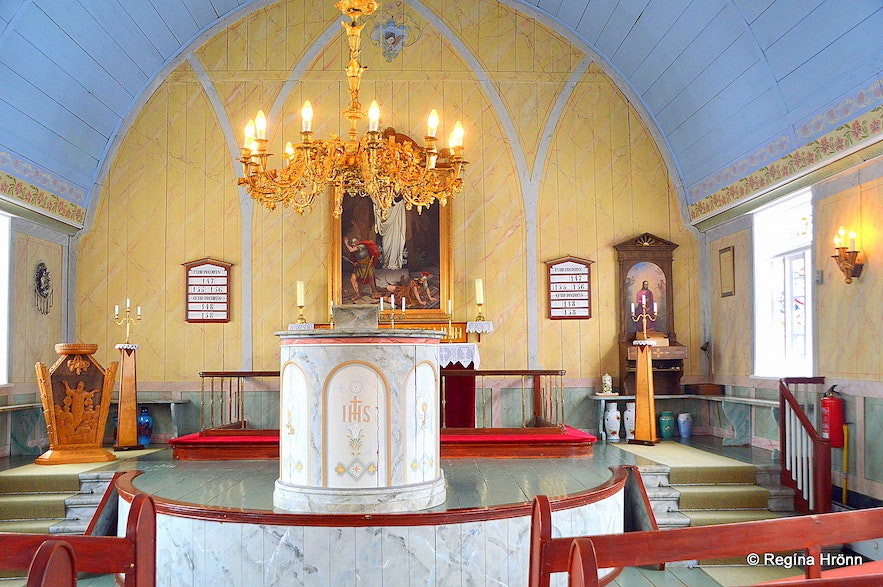 ​She told him that everything she saw and heard was so mysterious and strange.

From there on the minister dreamt of his daughter every New Year's Eve. On one occasion she told him that her foster-father in the elf-realm had died.

Since that time, he dreamt of her more often. 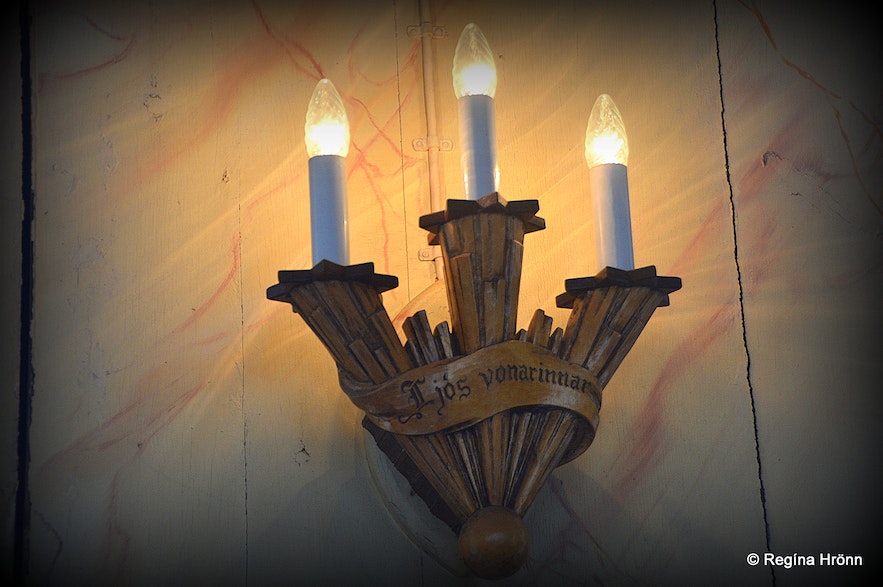 Once she told her father that she was to marry the next morning the son of the elf minister.

From then on Einar never again dreamt nor saw his daughter." 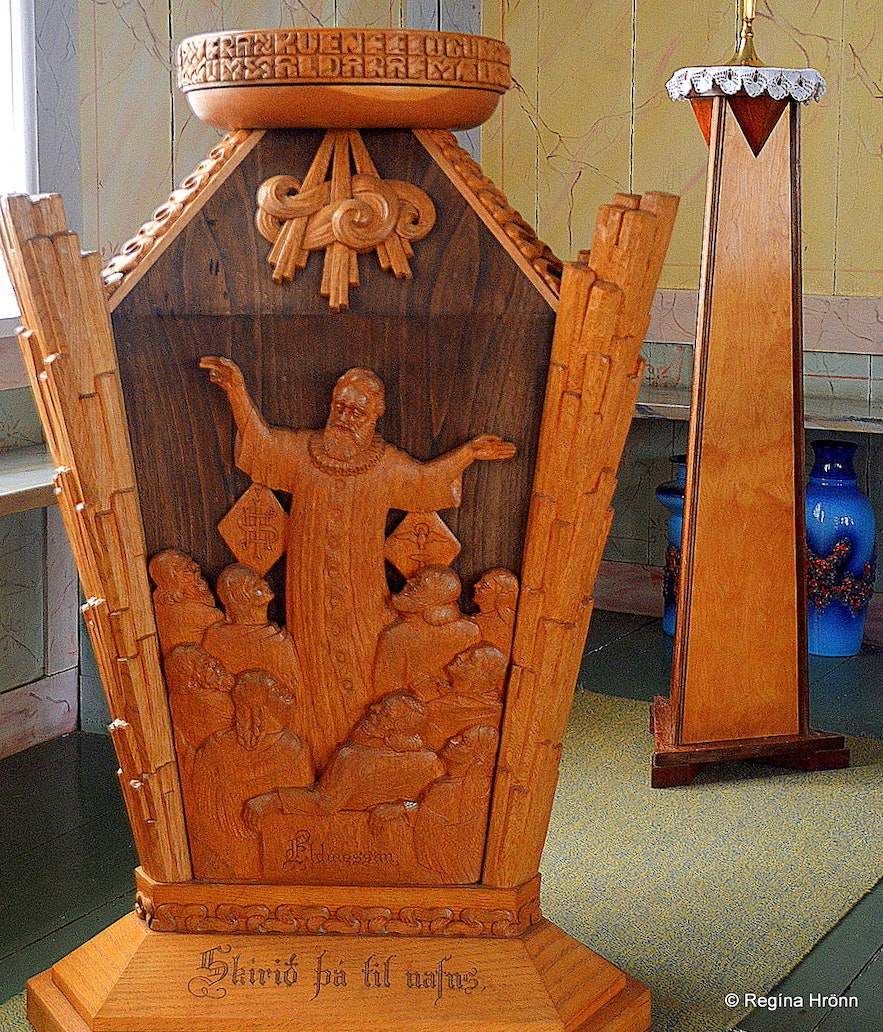 The baptismal font at Prestbakkakirkja church

There are many stories about the revenge of the elves as I have f.ex. told you about in the following travel-blogs:

and encounters with the elves at Christmas and a New Year's Eve: 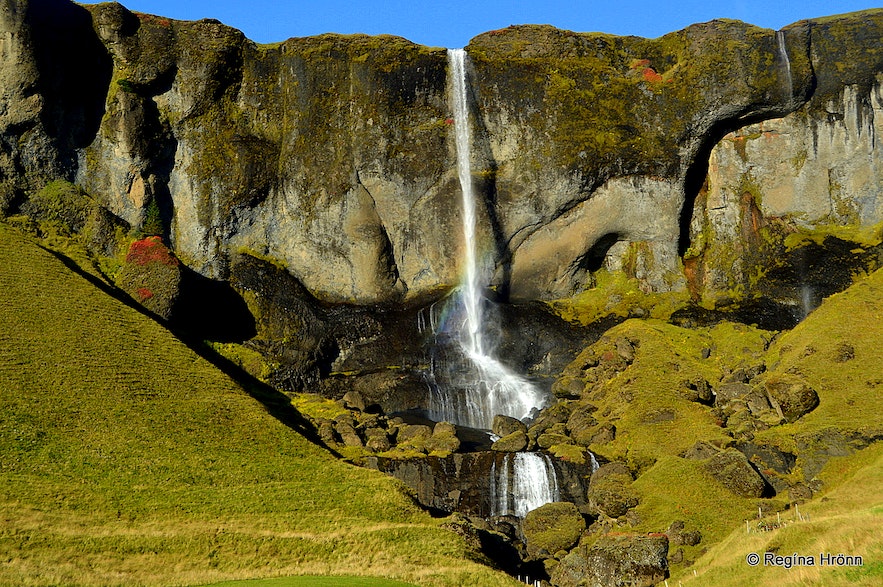 The elves are believed to move at Christmas or at New Year's Eve and thus we have many stories related to elves during that time of year. In some areas, it was customary to light a candle to show the elves the way during their move - and to put food on a plate outside for the elves.

If you meet an elf at a crossroads at this time of year and resist his/her temptations then you will have great fortune, but woe to those who get lured by the elves as they will lose their mind. 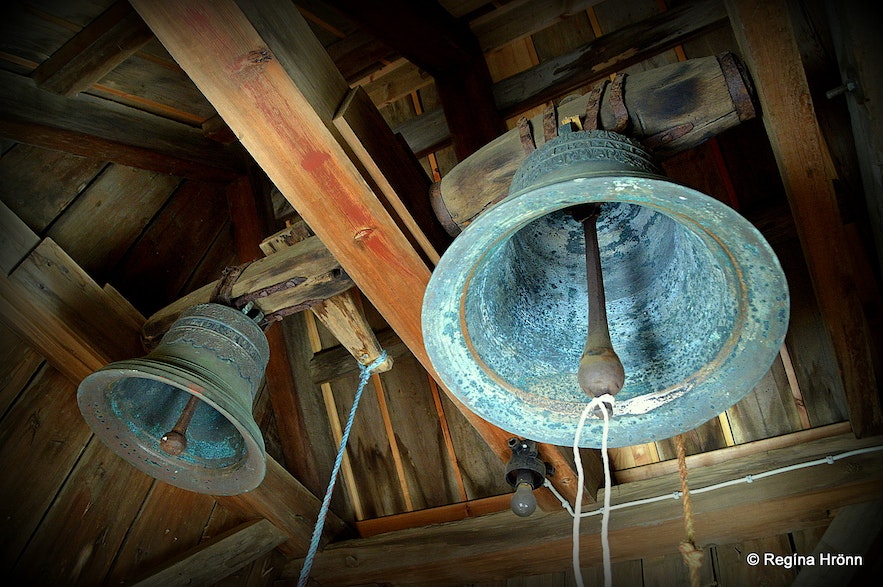 The church bells at Prestbakkakirkja

When I visited Prestbakkakirkja church Jón, the farmer of Prestbakki, showed us the church and told us the following story:

The minister got a new parish in Norður-Múlasýslu and moved there, but his son stayed behind.

The minister left his library at the altar, where there is a special compartment. One night the son went to the church to get a new book to read. Upon entering the church he heard a loud racket. 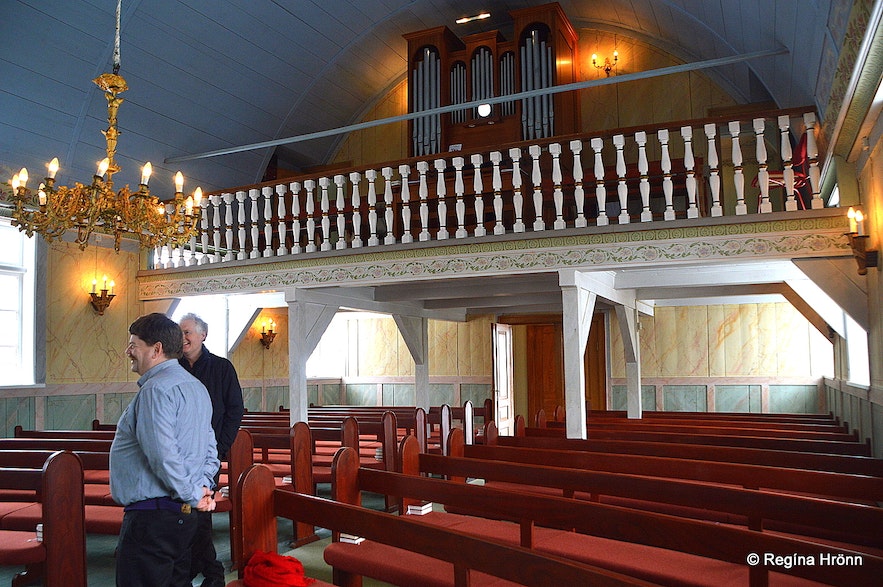 Jón showed us the church

The racket frightened him so much that he ran out of the church and back home; as nobody was supposed to be inside the church so late at night. The next morning people went to church to find out what had caused this racket.

Upon entering the church they noticed that all the burial tools were by the entrance to the church!

There is no explanation to be found why this happened, but it seems that the elves are still living at Prestbakki at Síða. 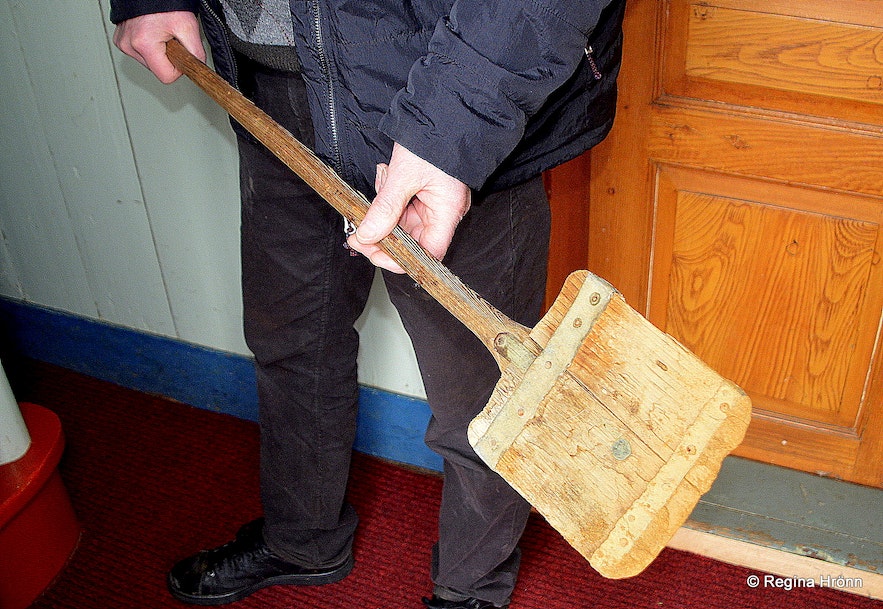 Jón the farmer at Prestbakki holding a shovel, which is a part of the burial tools of the church

Prestbakki at Síða is both a farm and a church site and here served the Pastor of Fire Jón Streingrímsson from 1778-1791.

Jón eldklerkur is best-known for the Mass of Fire on the 20th of July 1783 in Kirkjubæjarklaustur, when the massive volcanic eruption happened in Lakagígar. 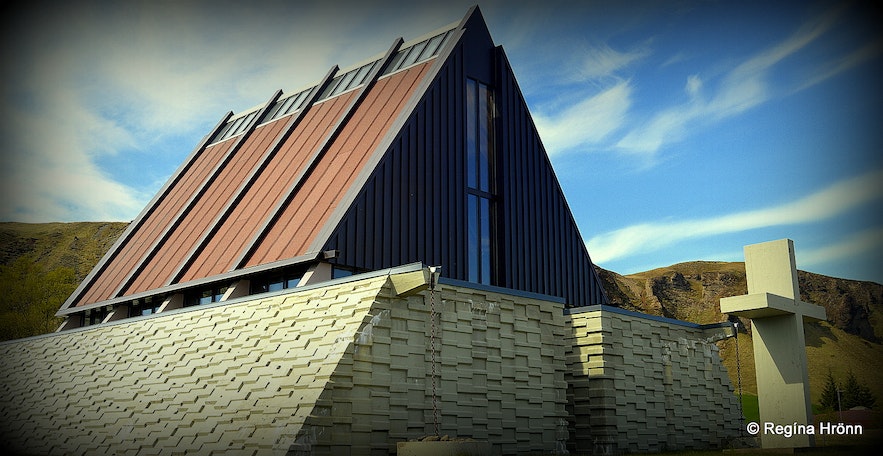 There is no church at Kirkjubæjarklaustur, only a memorial chapel. The closest church is at Prestbakki at Síða

What happened is that the lava flowed in the direction of Kirkjubæjarklaustur.

Jón held mass at the church and the mass was so forceful and the prayers of the convention so intense that the flow of lava stopped within two kilometres from the church!

A short hike from Kirkjubæjarklaustur will take you to Eldmessutangi spit, where you can see the exact location where the lava flow stopped.

You can read about the Historical Kirkjubæjarklaustur, Systrafoss & Systrastapi in South-Iceland in my travel-blog about this beautiful area.

There are also some other mythical beings living at Síða, like the dwarfs at Dverghamrar, which you can read about in my travel-blog: 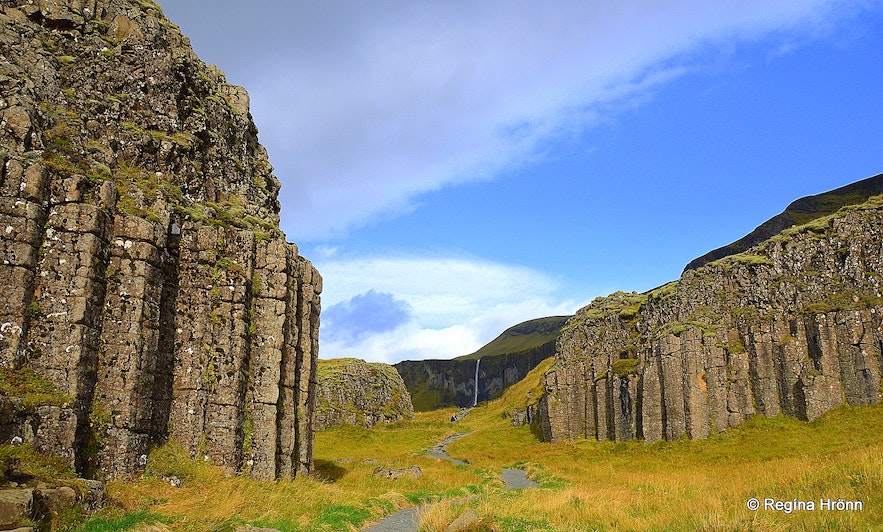 Dverghamrar - the home of the dwarfs

In the vicinity, at Efri-Vík, you will also find an elf-church and an elf-city, so this is a very interesting part of Iceland to visit, if you are interested in the mythical beings of Iceland:

Have a lovely time at Kirkjubæjarklaustur and at Síða :)