I love writing about my ancestors the Vikings, who settled Iceland in 874 AD give or take a few years, and I often get this question: "Where can I see Viking stuff in Iceland?". So I was thrilled to hear of a Viking comedy show in English at our concert hall Harpa - called the Icelandic Sagas - the Greatest Hits in 75 minutes.

On their website they describe the play as being "a comedy theatre roller coaster ride through all 40 of the epic Icelandic Sagas" and that is exactly what you will get :) 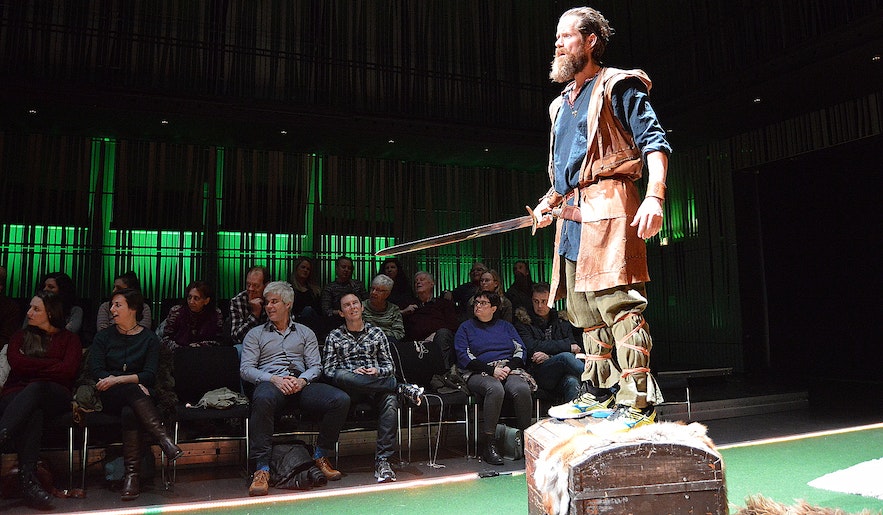 This excellent comedy show is almost like a farce, quick, silly, funny - often hilarious to the point where we were laughing so much that I almost didn't notice that they had started on a new Saga ;)  It was non-stop fun for 75 minutes! 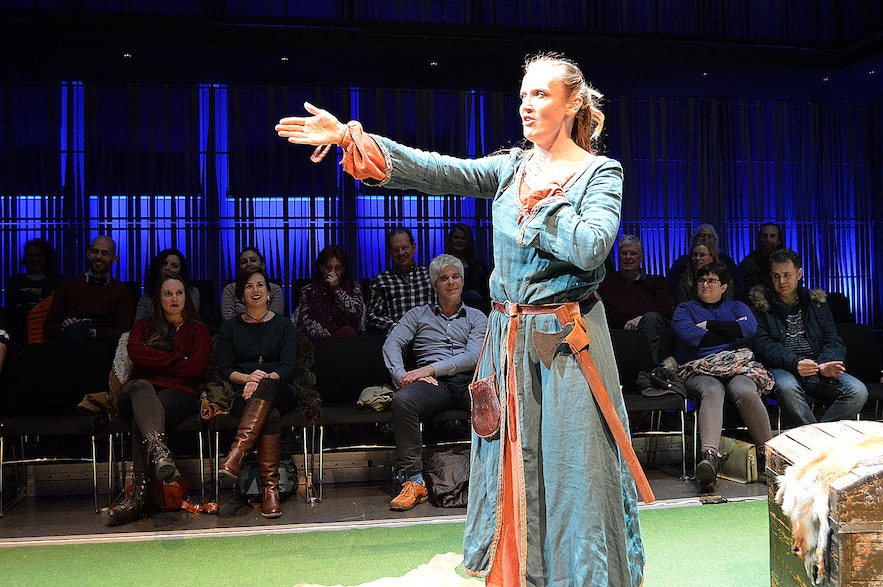 Then there are several very well-known Icelandic Sagas, which are known all over the world by the many Saga enthusiasts, who have read and love these Sagas of the Vikings. It has come as a surprise to me how many people abroad have read the Sagas, and it often happens when I tell people on my travels abroad that I am Icelandic, that they start reciting something from the Sagas!

I have read some of the Sagas - and some of them I read very thoroughly at college in old Icelandic - I absolutely loved them back then, and I love them even more now that I am a grown-up and have visited all of the Saga locations in Iceland. 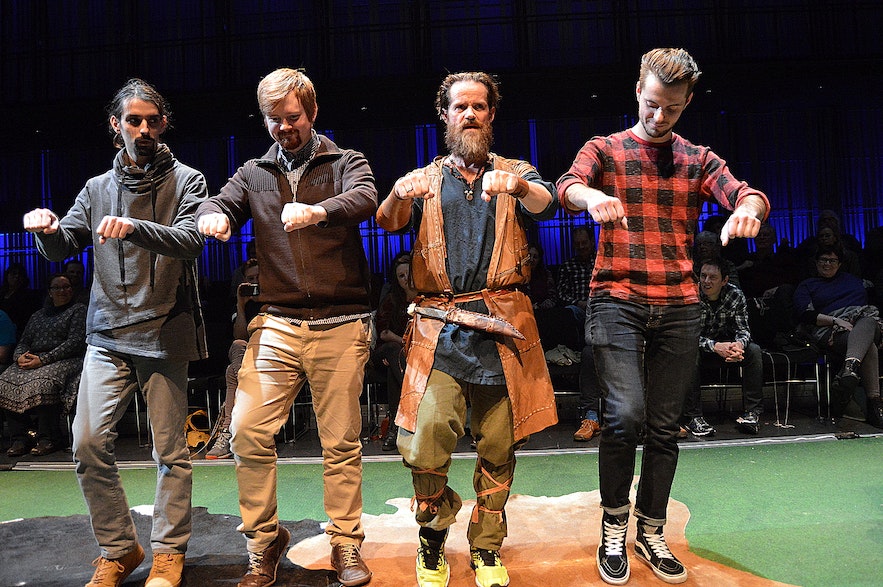 The above-mentioned Sagas are the ones I know, and thus I got the reference to the highlights, but there were others which I am not familiar with - still it was so much fun watching these energetic actors portraying the highlights from those Sagas. I learnt a lot and will definitely find time to read the rest of the Icelandic Sagas in the near future.

The set of the Icelandic Sagas - the Greatest Hits in 75 minutes is different from the set of the shows I have seen at the theatre, as the stage is in the middle of the theatre with the audience sitting on both sides of the non-elevated stage. You will feel like you are participating in the show as the actors are so close to the audience. 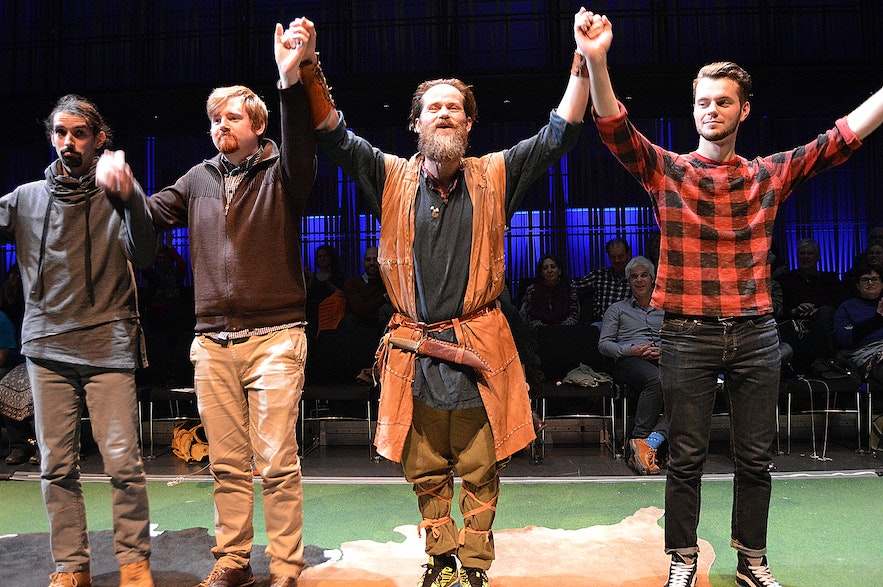 The comedy show is interactive and people from the audience will be asked to take part in the show either from their seats or on stage as these two photos, above show :)

Do bring your camera with you as the actors will urge you to take photos, videotape the show, and what have you, and post the photos on Facebook, Instagram, and Twitter.  But without flash, as to not disturb the other guests and the actors. 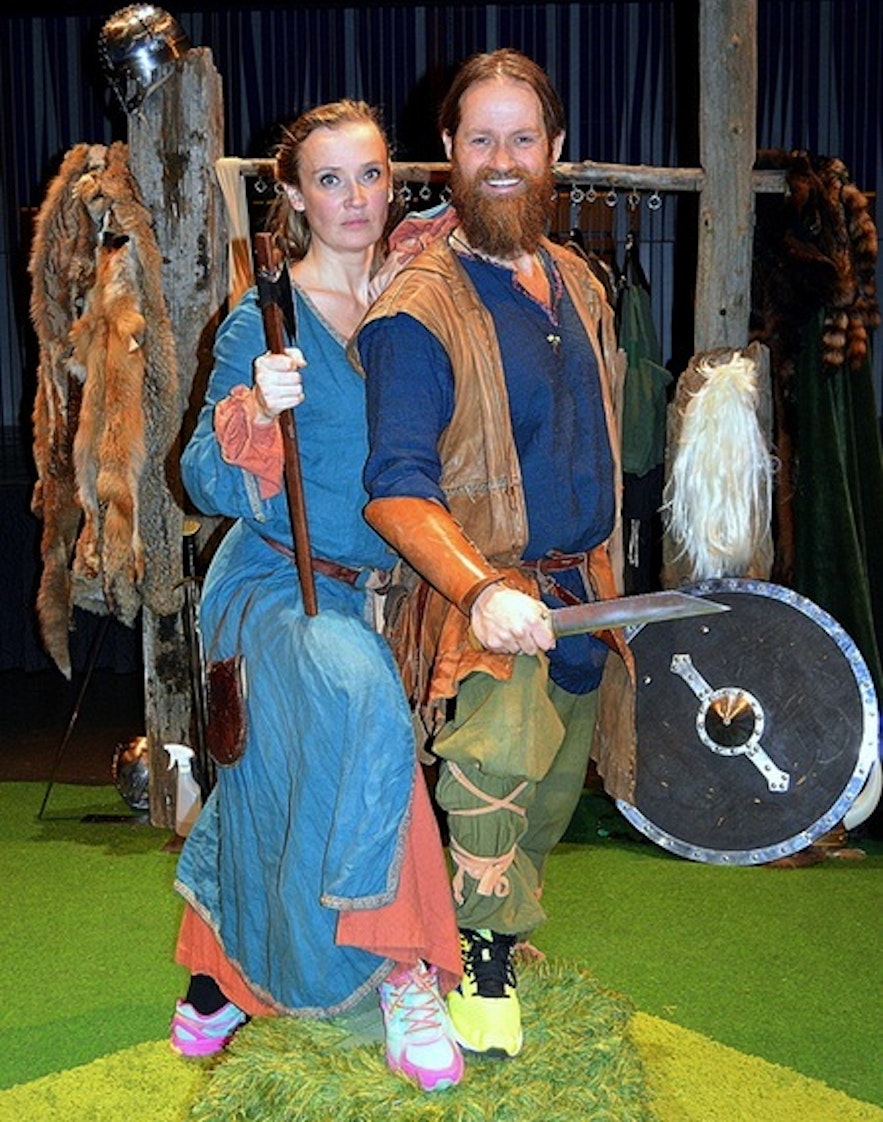 I wasn't even sure before I joined the show for the first time that I could actually take photos or else I would have come better prepared. I had only one of my cameras with me and took some photos without flash. Since then I have been in the audience of the show twice, but never seem to manage to get good enough photos.

Afterward, I asked the actors for photos for my travel-blog and got to dress up in this beautiful bottle green velvet mantle, which was used for a scene in the Game of Thrones series, but many scenes from that series were shot in Iceland!

See also my travel-blog: The Extraordinary Game of Thrones Locations I have visited on my Travels in Iceland.

I was not the only one who got a photo of myself with the actors, as they offer the audience to have their photos taken with them after the show. So I had to wait for a while to get to be alone with the actors and take photos and ask them questions about the show. Do ask them for photos, I think a photo like this is a great souvenir from Iceland. 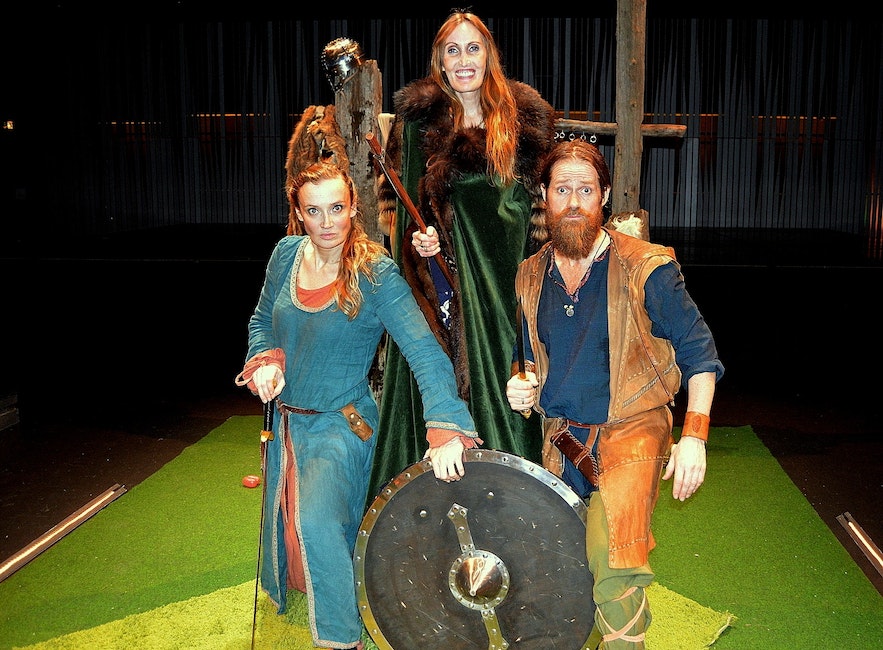 Posing with the actors after the first show

I love these Icelandic actors, they made us laugh from the very beginning of the comedy show until the very end! What stamina and enthusiasm - and to be able to remember the lines from the whole show in English - and being on stage without stopping for 75 minutes, is a great achievement in my eyes - kudos to Lilja and Jói for a job well done!

The actors of the show need a break from time to time, and in the summer of 2018, I got the same photo with the marvellous actors below :)

The first time I saw the show it had just started, but in 2018 it has become so popular that there was a long line of people waiting. The actors told me that they have even seated 120 people for one show! 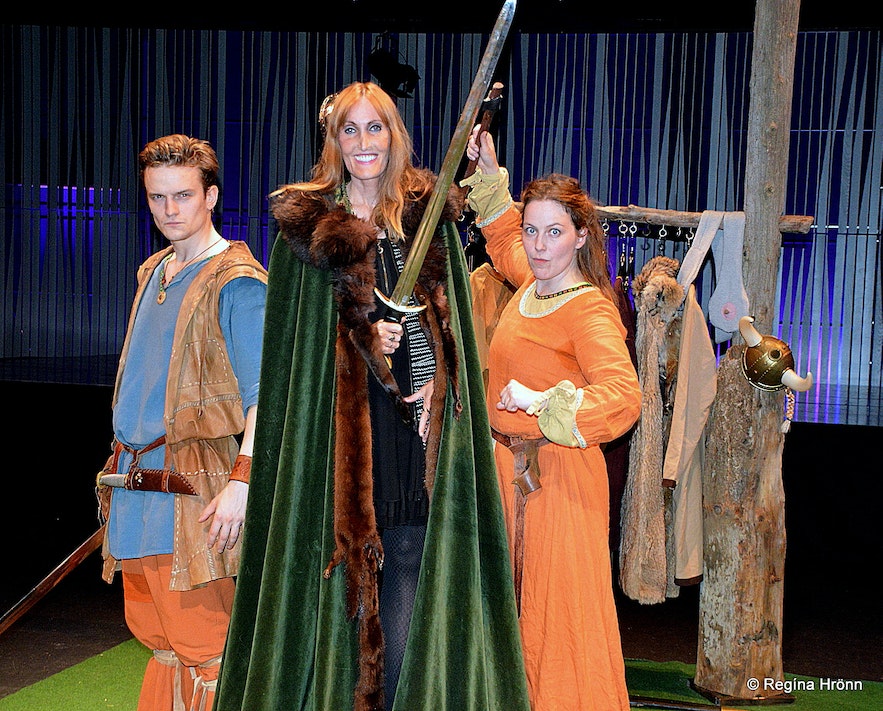 Posing with the actors after the second show

I would recommend that you come prepared and get yourself a bit acquainted with the Icelandic Sagas before seeing the show. There is an excellent museum downtown Reykjavík by Grandi called the Saga Museum, where you will get "a close encounter with the most historical figures and major events in the Icelandic history" as they say on their website.

He settled in Borg in West-Iceland and you will find an excellent Viking museum, the Settlement Centre in Borgarnes, which depicts the story of Egill and the Settlement of Iceland. 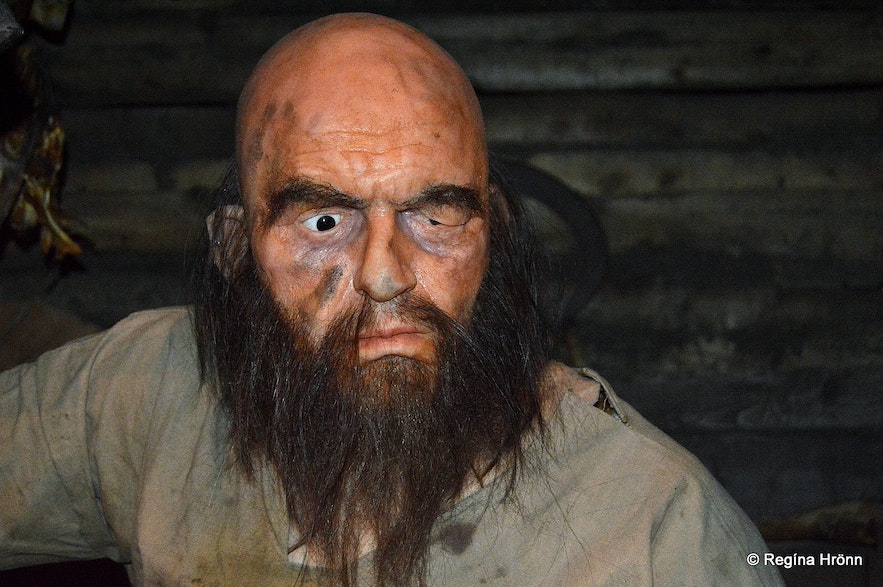 Skalla-Grímur Kveldúlfsson as depicted at the Saga Museum in Reykjavík

At the Saga Museum, you will meet very lifelike wax figures of many well-known characters from the Icelandic Sagas and other Icelandic stories. I have visited this museum several times and often use photos I have taken at the Saga Museum for my travel-blog. It is a highly recommended visit before you see the Viking show at Harpa concert hall

Other Viking related "stuff" you can find in the Great-Reykjavík is to have dinner at the Viking Village in Hafnarfjörður town in the Great Reykjavík area, where you can even stay at a Viking hotel. And if you visit us in June you can take part in the Annual Viking Festival.

For authentic Viking stuff on display, you can visit Þjóðminjasafn Íslands - the National Museum of Iceland. You will also see statues of our Saga heroes in several places in Reykjavík. 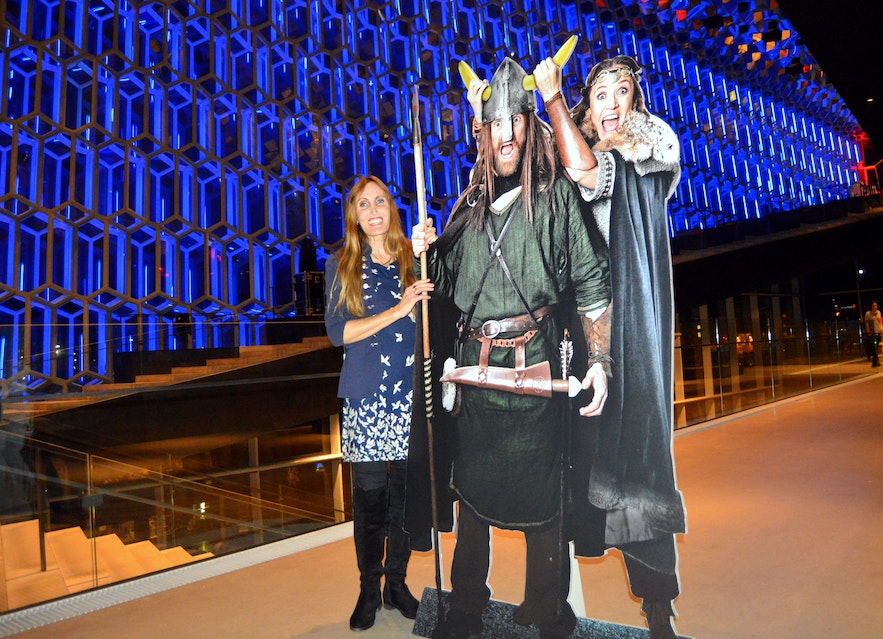 Our Icelandic Sagas, which were written and preserved on calfskin, are family sagas dating back to the 9th-11th century from the time we Icelanders call Söguöld - the Saga Age. They give us insight into the lives of the descendants of the Viking settlers in Iceland and show us what the second and third generations of Vikings in Iceland were doing.

In my photo below you will see an old manuscript on display at the Reykjavík Culture House. 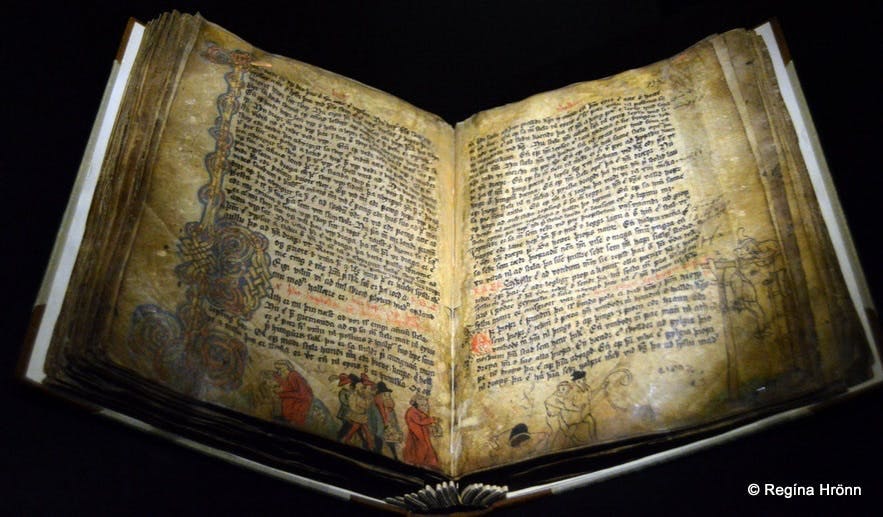 An old Icelandic manuscript at the Culture House in Reykjavík

The Sagas are sometimes very bloody and you can expect some reenacted killings on stage right in front of you! 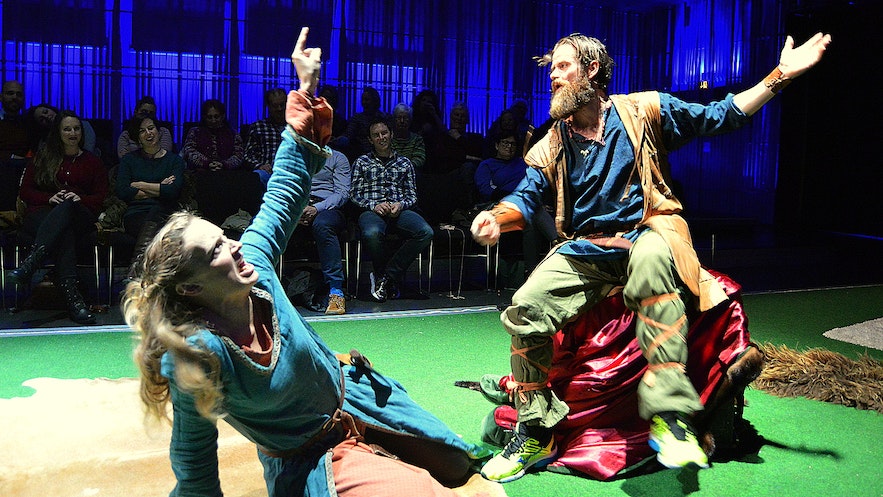 The Árni Magnússon (1663-1730) Manuscript Collection is listed on the UNESCO world cultural heritage list called the Memory of the World Register. It is described as being "widely recognised as constituting one of the high points of world literature and still translated and read throughout the world today".

It is not known who wrote the Sagas, but they were written in the 13th and 14th century AD. It is believed though that the most influential Icelander, Snorri Sturluson, wrote the Saga of Egill.

You can flick through the Icelandic Sagas online in English, Icelandic, and Old Norse. 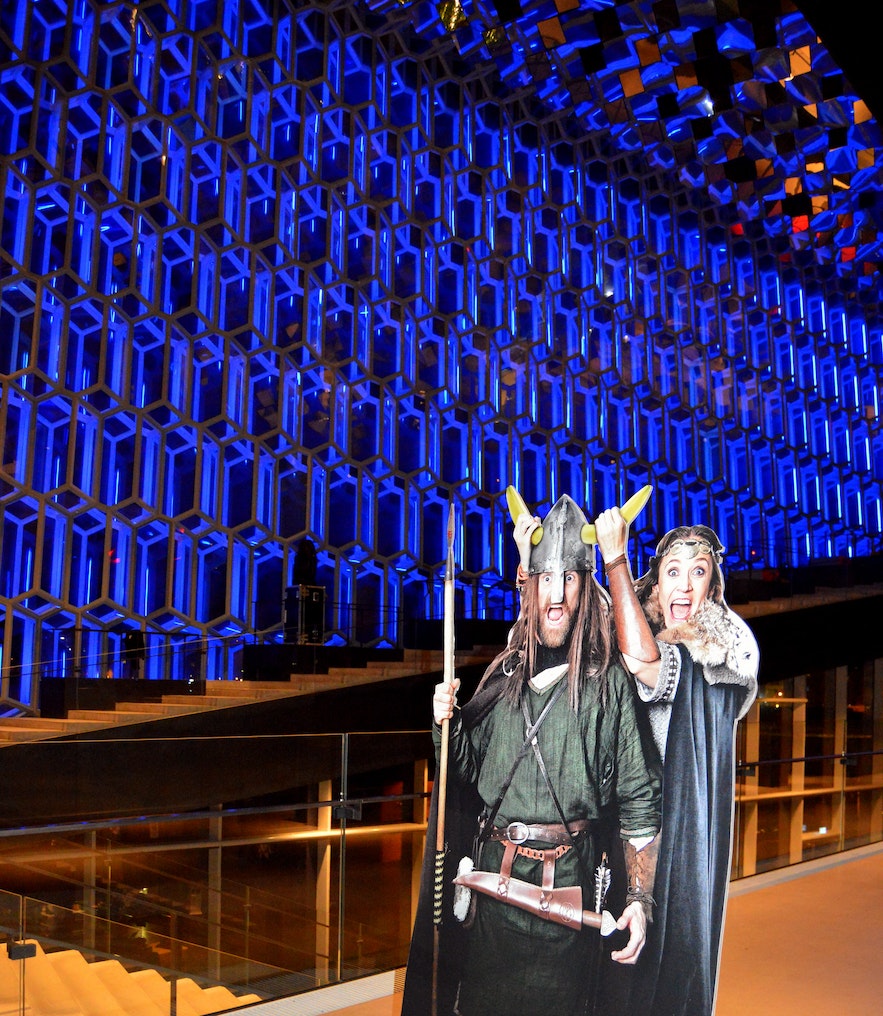 If you find yourself in Reykjavík and are looking for evening entertainment - or you are a Viking enthusiast or want to know more about our Icelandic Sagas and the Vikings and be entertained at the same time - then this is the play for you!

This hilarious show lasts for 75 minutes and is in English.

Have a lovely time at the Saga Show :)