Raufarhólshellir lava cave - the Lava Tunnel - is one of the extraordinary lava caves in Iceland. It has just recently been made more accessible to visitors and reopened with guided tours in June 2017.

It is such a delight visiting this 4th longest lava cave in Iceland. 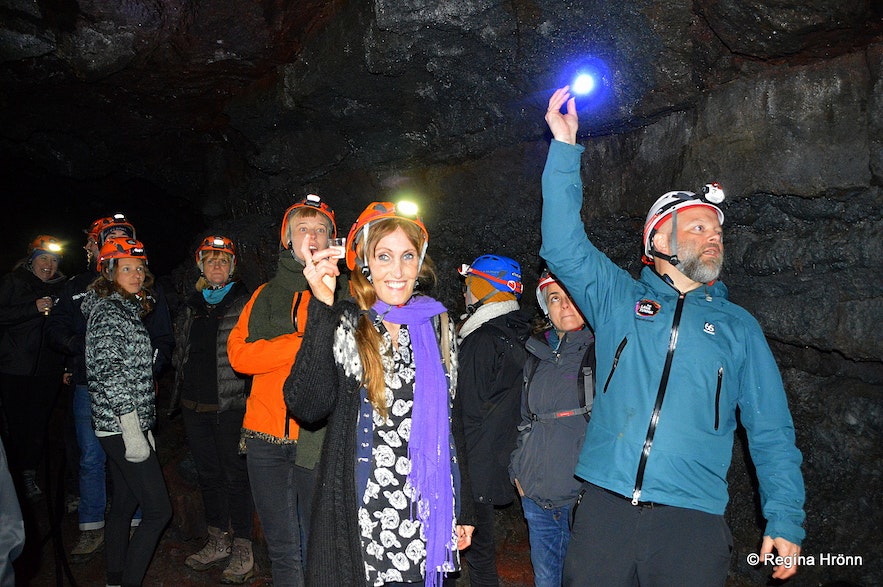 On a guided tour of Raufarhólshellir cave

I had visited it on a couple of occasions before a footbridge and stairs were added to it, and I am so glad that it is so accessible and easy to visit now. I once showed it to a girlfriend from London and she was all but traumatized after the visit, as she was not used to walking on big rocks and sliding on snow.

Now it is a breeze and you don't have to worry about your footing any longer.  I will for sure be taking my future visitors on a guided tour of Raufarhólshellir. It is only a short drive from the capital city Reykjavík and makes for an awesome experience.

Raufarhólshellir - Split Mound Cave - is approximately 1,360 m long, 10-30 m wide, and 10 m tall where it is at its tallest. The roof is some 12 m thick, apart from where the road crosses the cave, where the roof is getting thinner. 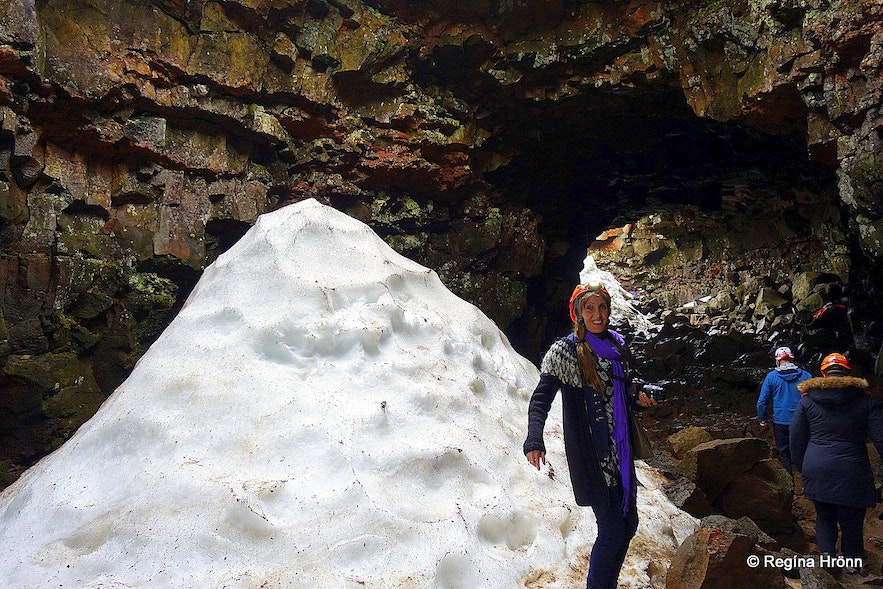 In a couple of places, the roof has caved in allowing outside light to flow into the cave, creating an even more mysterious atmosphere. These openings/skylights also let in snow and beneath the openings, you will see huge piles of snow, which make the cave very distinctive.

Even in the summertime, you will find snow inside the cave, so be prepared to walk on some snow and wear appropriate footwear. Ice sculptures can be seen further inside the cave in the wintertime. This point also makes for a very good photo. My photo above is taken in late May and the piles of snow were still really high. 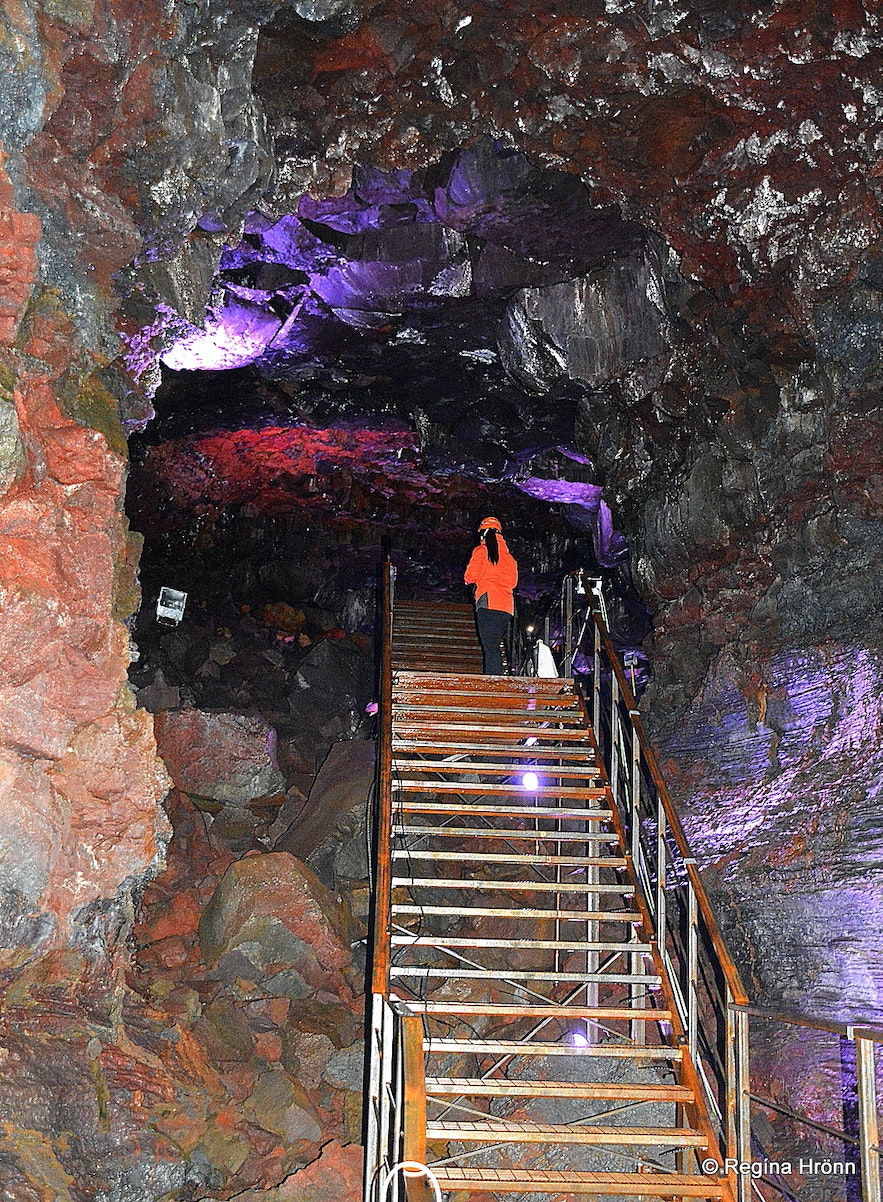 We were provided with safety helmets and flashlights and experienced mountain guides showed us around the cave for an hour. They explained to us the geology of the cave and volcanic activity in Iceland. Here we were actually walking in the path of the flowing hot lava from an eruption that took place some 5,200 years ago east of Mt. Bláfjöll - called the Leitahraun eruption.

We stopped at various viewing platforms and I was amazed at seeing how beautiful the roomy cave was when it was lit up. I had always thought it was beautiful but had never been this far inside the cave to see the extraordinary colours. 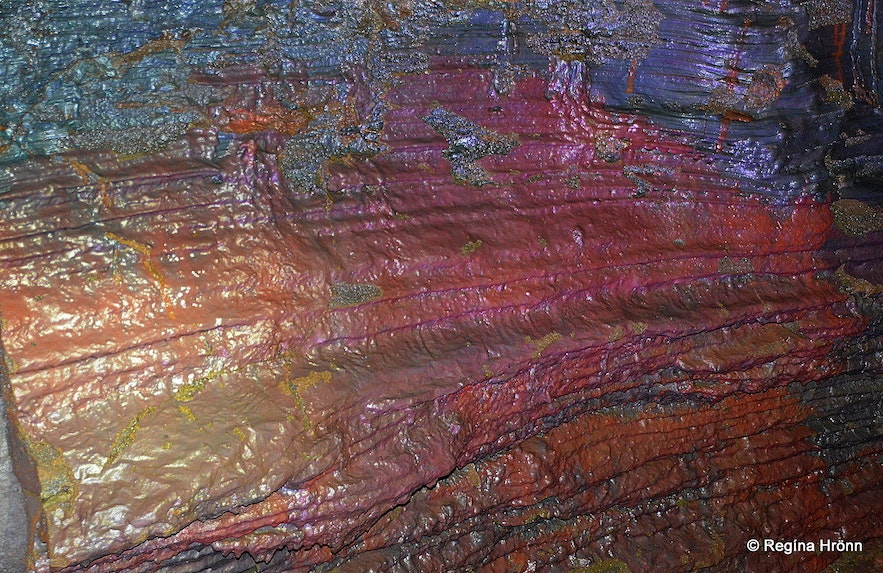 They have indeed made a feast for the senses and as for my London girlfriend, who was stepping out of her comfort zone, - it would have been much easier for her to visit the lava cave after the changes were made to it.

Lighting has been installed in the cave to make it easier to see the vivid lava colours inside the cave. Lava can have such beautiful and bright colours, which to me is the main attraction for going down into these lava tubes - that and the distinctive lava formations, stalactites, and the lava straws to name just a few.

You can see the different colours in my photos - created by the minerals in the rock. The red colour is i.e. created by iron and the yellow colour is created by sulfur. 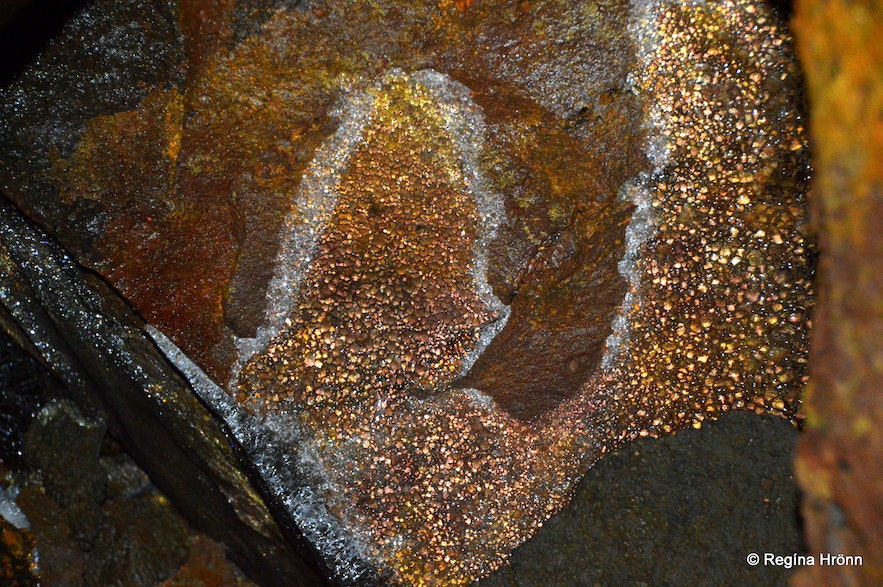 In some parts of the cave, you will notice a thin crust of ice covering some of the lava inside the cave, creating a beautifully sparkling, iridescent coating on the lava.

Seeing that the cave is located right by the road and only 30 minutes away from Reykjavík then it was frequently visited by us Icelanders. Now, with the increasing number of tourists visiting our country, it is estimated that some 20,000 visitors explored Raufarhólshellir annually in the past years.

And some of them did not follow the protocol of cave exploration and left rubbish inside the cave, beer cans, bottles, toilet-paper and such :( 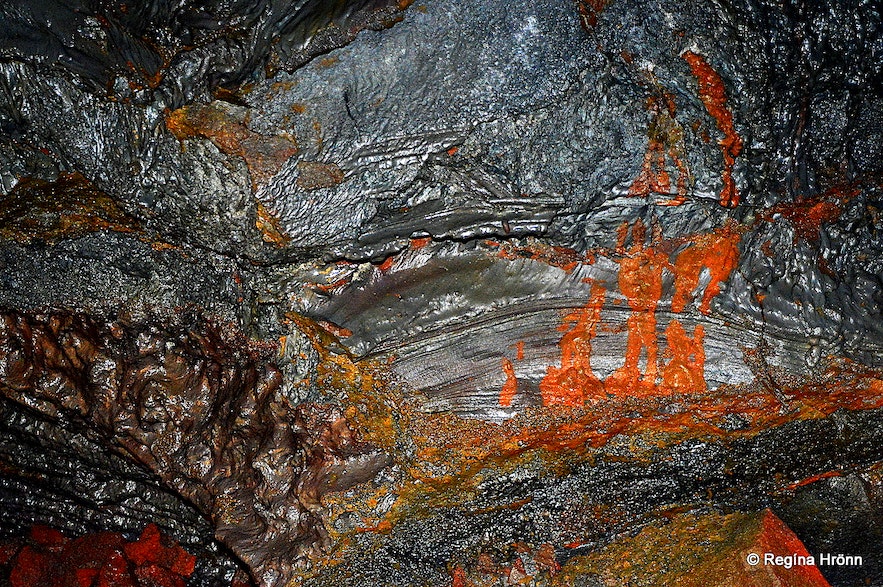 Damages were also done to the cave by removing countless stalagmites and stalactites from it. Some people entered the cave without helmets and were generally ill-prepared, and there were even incidences of people getting lost in the cave.

So measurements had to be taken. The landowners had to choose between closing their preserved, beautiful cave down or find someone to offer guided tours of the cave.

The new operators of the cave had to deal with the massive task of cleaning the cave and making it presentable for guided tours - kudos to them for a job well done! 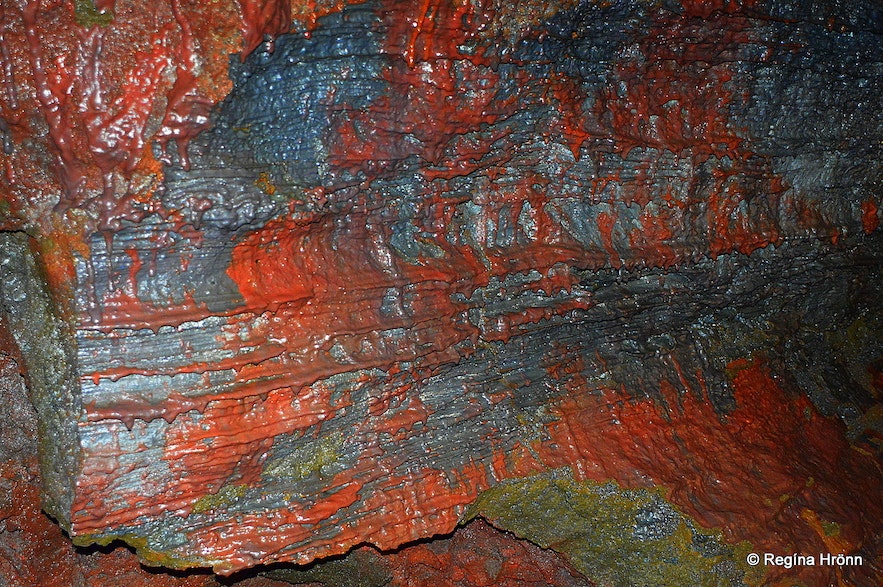 My mother told me about her visit to the cave back in 1958, when she was 13 years old and attending the boarding school Hlíðardalsskóli, but that school is the owner of Raufarhólshellir. They went on a field trip to the cave and she told me how rocky it was and very difficult to enter.

So I must say that I am glad that we now have daily guided tours, so more people can enjoy the beauty of the cave.

Guided tours depart from 09:00 until 17:00 every hour on the hour. I joined the standard tour, but for the more adventurous amongst us, there is an extreme 4-hour tour where the guides take you to the end of the tunnel and the description of the tour tells of "magnificent lava falls and other natural monuments" to be seen on this extreme tour.

Remember the 2014 Hollywood blockbuster Noah, starring Russell Crowe, Jennifer Connelly, and Anthony Hopkins? Raufarhólshellir was the cave of Noah and a scene with Anthony Hopkins was shot here in the cave. You can see the shooting of that scene starting at minute 16 in the video above (Spanish subtitles).

Around 150 Icelanders took part as extras in this film, which was shot here for 4 weeks in 2012. If you watch the whole video then you can see the other shooting locations in Iceland. Some changes were made to the cave during the filming of Noah, steps and paths were made from the main entrance of the cave, which made it easier to step into the cave. 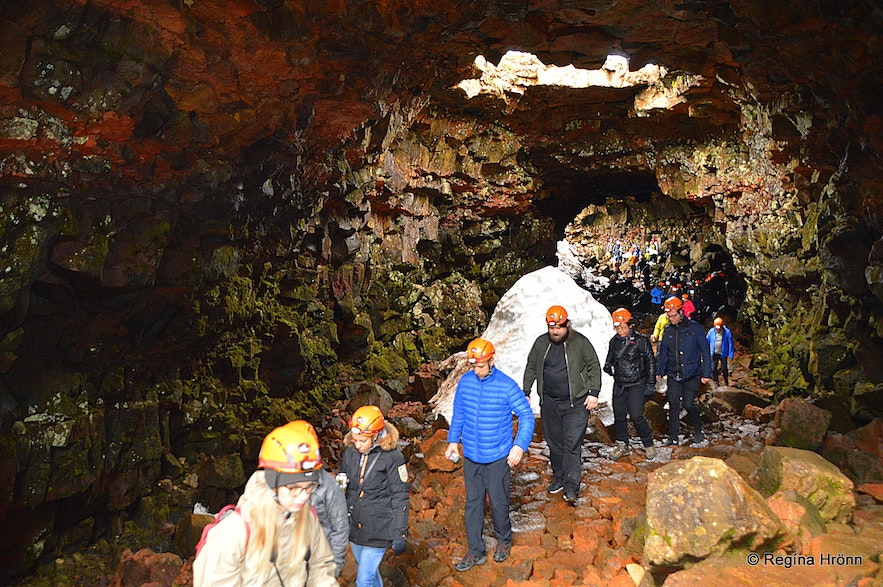 The cave contains a secret, which I am going to tell you a little bit about. During your visit to the cave, you will stop by a framed document about 300 m inside the cave, where the guide will tell you a story of an urn containing the remains of the last members of an Indian tribe.

The story goes that when Magellan was sailing the world he stopped by the Strait of Magellan and encountered the last dying members of an Indian tribe. After their death the Indians wanted their ashes to be preserved in the most peaceful place on earth. I will leave it to the guide to tell you the rest of the story about how the earthly remains ended up in an urn in Raufarhólshellir. 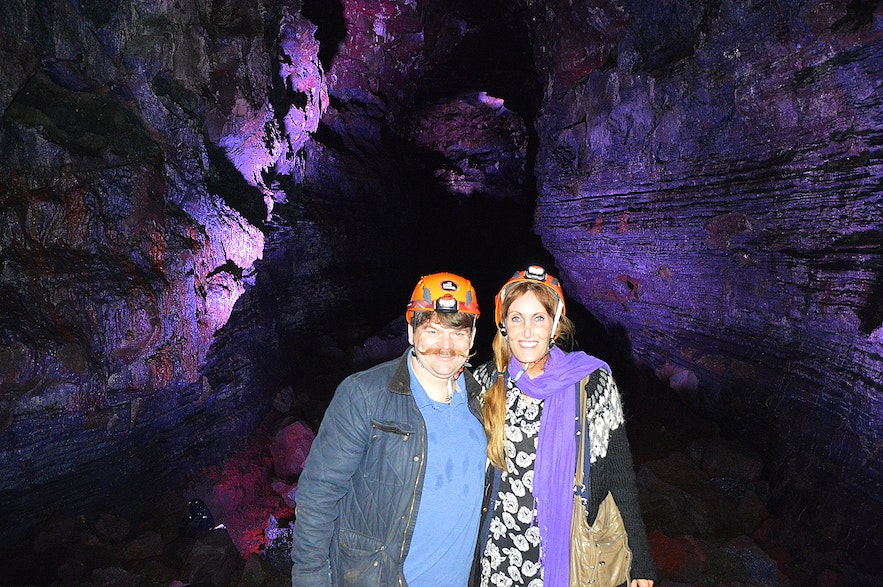 With my husband inside Raufarhólshellir lava cave

The difficulty level of the standard tour of Raufarhólshellir cave is 1 out of 5, but there is some walking on snow and up and down some stairs, so do keep that in mind. Dress warmly as it gets cold inside the lava caves and do wear sturdy shoes as there is still some walking on uneven surfaces and snow.

At the end of the tour, you can get your photo taken at the location you see in my photo above, which is as far as we went on the standard guided tour. The extreme tour takes you much further into the cave. 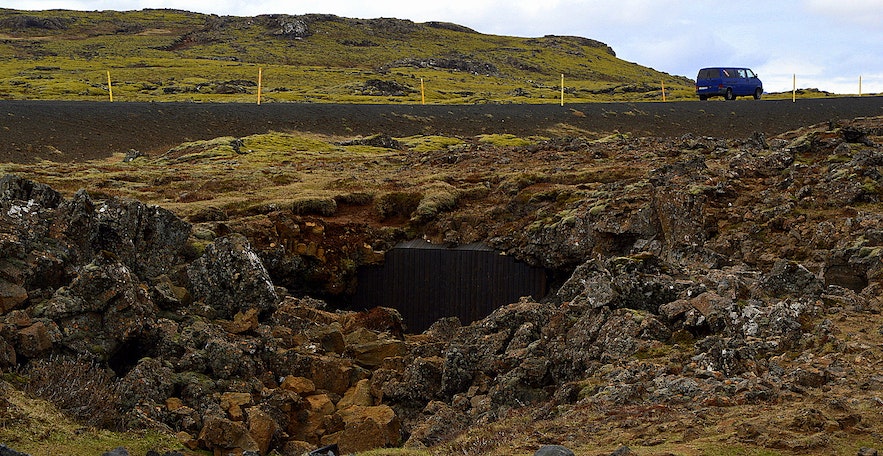 The entrance to Raufarhólshellir lava cave

Raufarhólshellir is located only 34 km away from Reykjavík city. To get out of Reykjavík follow route 1 for some 18 km, then turn right on route 39, where it says Þorlákshöfn - and drive for 12 km on that road. Road 39 is called Þrengslin and the main entrance to the cave is on your left-hand side.

The cave is not visible from the road, but it is very close to the road, only some 20-30 metres and well marked. You will be driving on top of it as a section of the cave lies under the road. 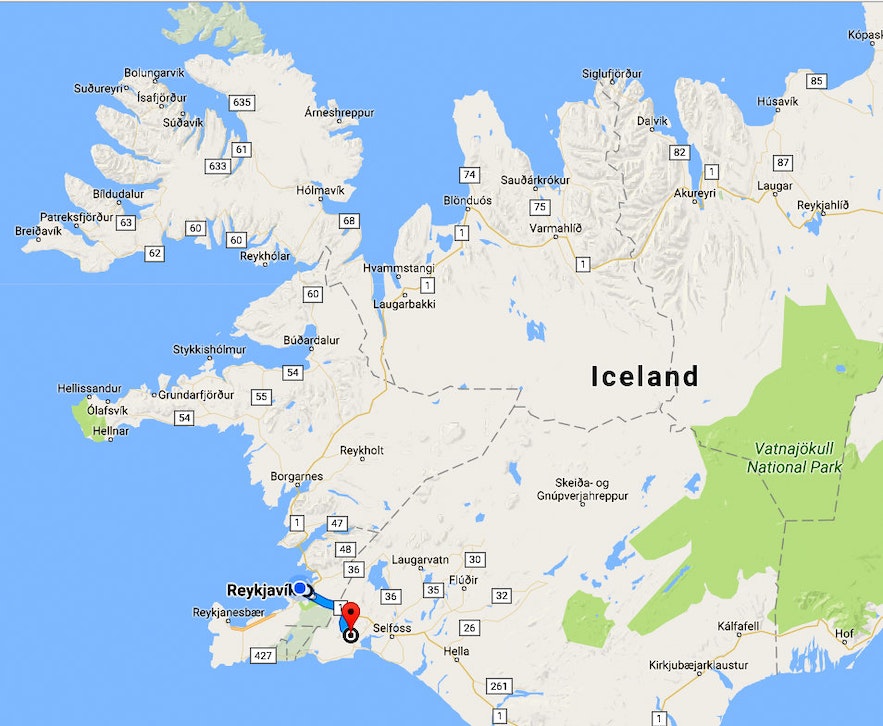 To reach Raufarhólshellir cave you can rent a car in Reykjavík for the day and also visit other areas of South-Iceland on the same day i.e. the pretty villages  Eyrarbakki and Stokkseyri by the sea.

If you want to join a tour with transport from Reykjavík then that is also possible with the following tour: